Today is National Chocolate Mint Day! Not to be confused with National Peppermint Patty Day which was just about a week ago.
I asked Theresa to take my picture with the kids like usual, and she said "No way! This is my celebration!"
Okay, okay. You do love your chocolate mints. After all, it wasn't me who went to Target after Christmas and bought 20 bags of Dove Peppermint Bark to put in the freezer to last the entire year... And it's not me who keeps a bag of York Peppermint Patties right next to them when she feels like something different.
You're right, this one is all yours. 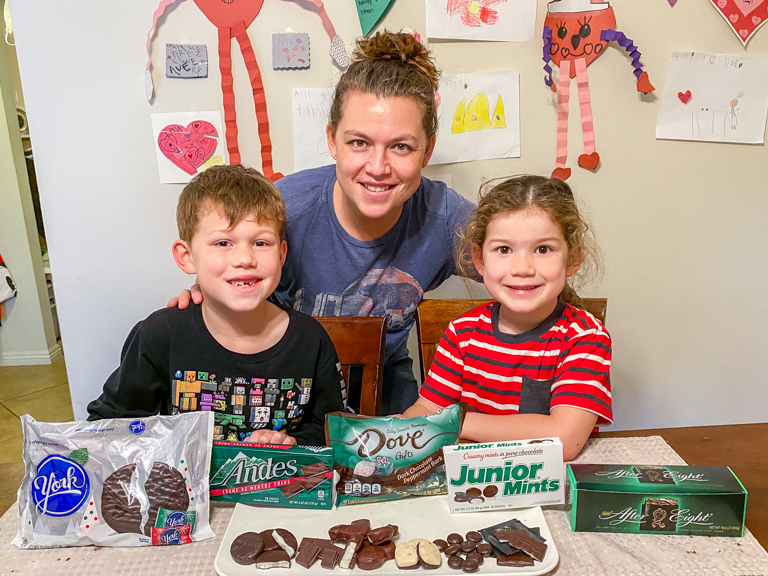 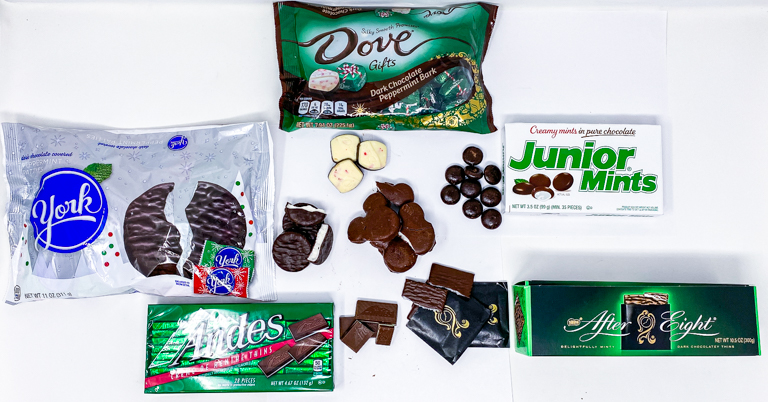 The kids were excited about this one. I had lots of help with the setup for my product shots. Unwrapping the different candies, grabbing scissors, etc. 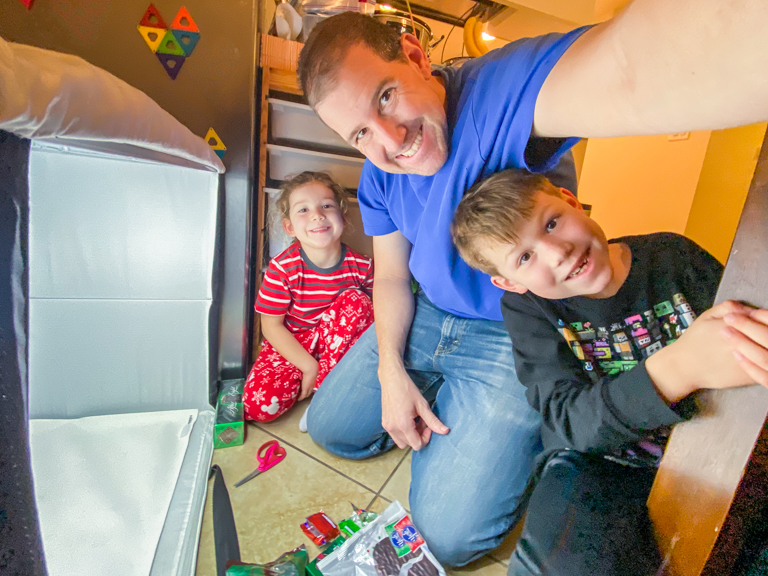 Let's get this taste test under way! 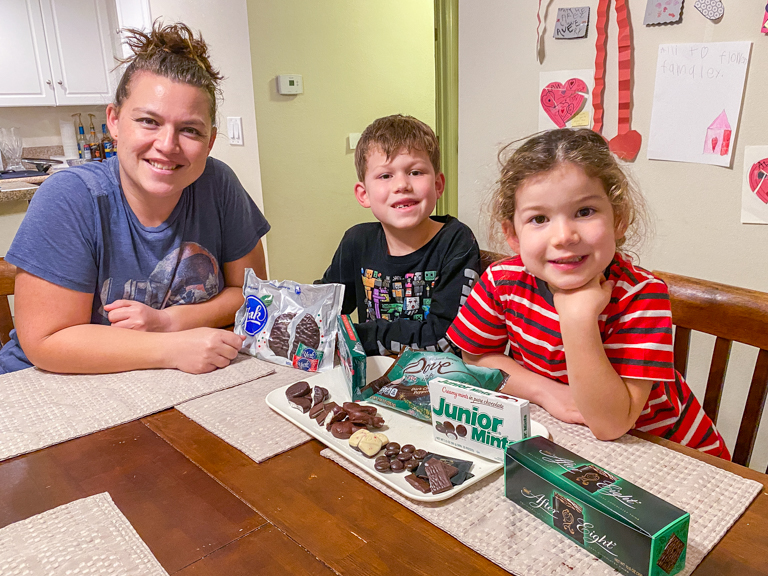 Here's the chocolates by themselves, and the order in which we'll be tasting them.

That means that the first up are these York Peppermint Patties. This is generally what I think of when I think of chocolate and mint. 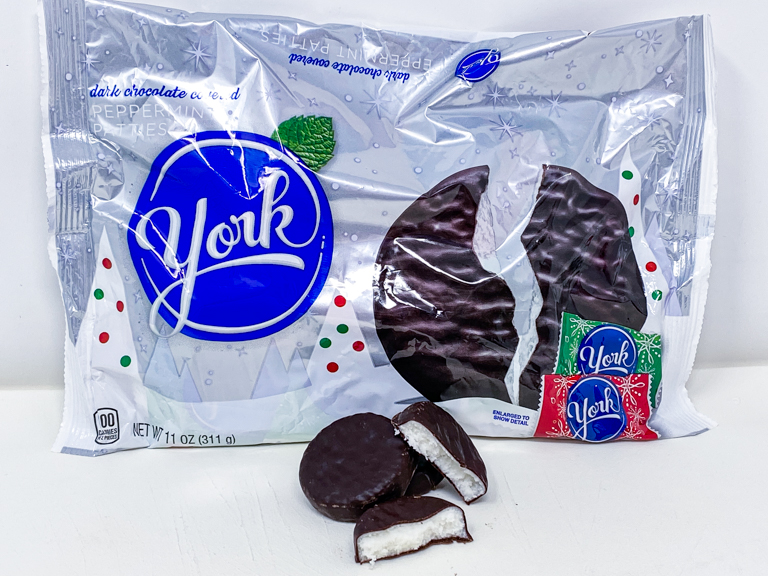 The mint confection inside is enrobed with a dark chocolate. These York Peppermint Patties have a great snap to them. 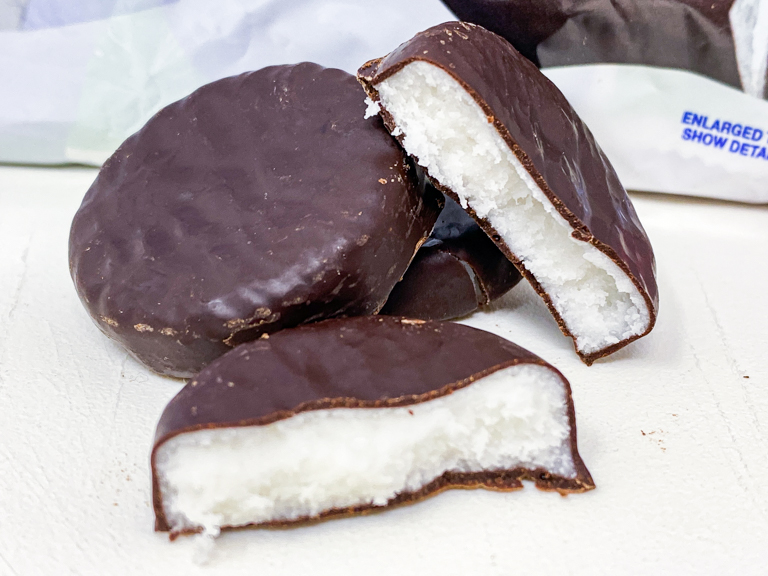 Well one thing is for sure, they don't skimp on the mint. The peppermint flavor on this one is pretty intense! I don't know that I'm going to be able to taste anything after this one! I should have had a palate cleanser between each of these! 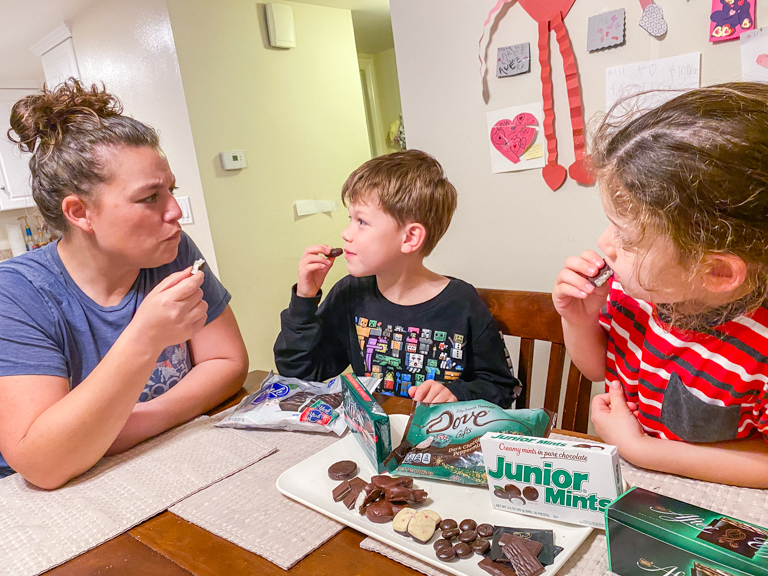 Next up is the second treat that I think about when I hear chocolate mint. It's the classic Andes Mints! 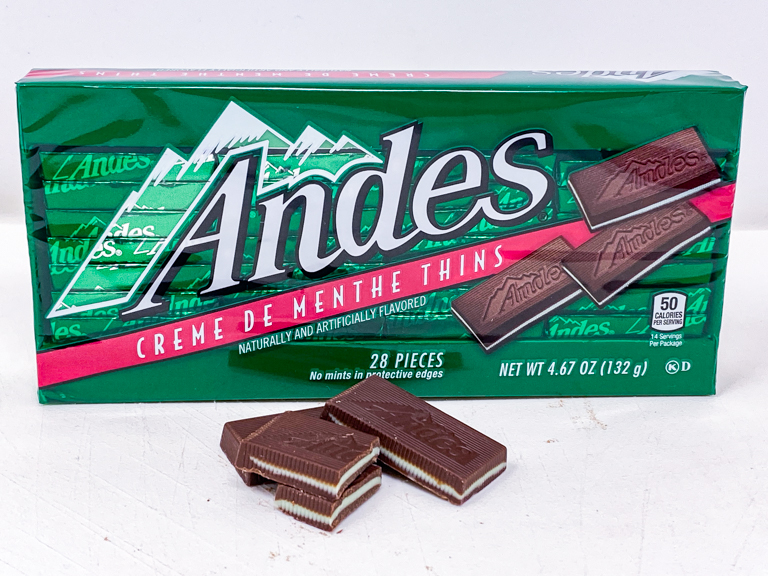 These are layered with dark chocolate, a creamy peppermint layer, and then another dark chocolate layer.
The mint in this one is much more subtle than the York. It's also a smoother mouth feel. Theresa says she likes to just suck on these versus crunching them. 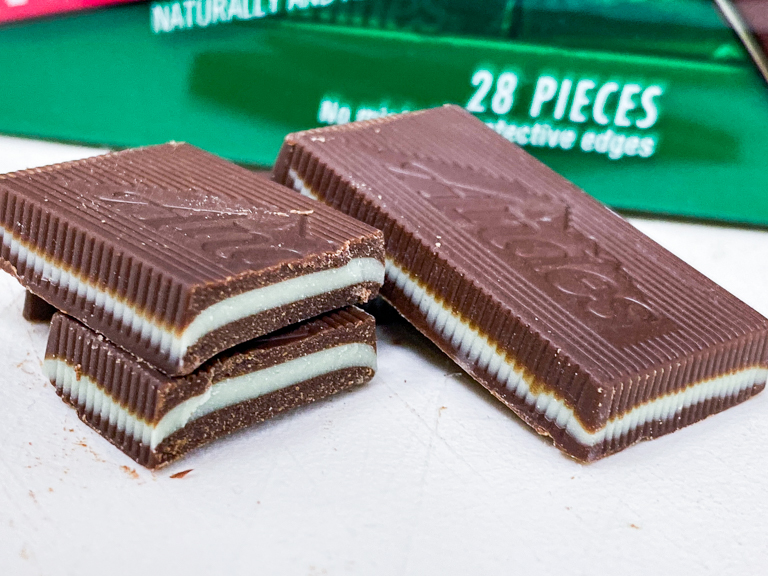 Next up are what we're calling Alli's Peppermint Patties. Alli and I made these last week completely from scratch! The peppermint insides were based on how much peppermint oil Alli decided to put in. And the outside chocolate layer is made from semi-sweet chocolate chips that we melted. It's all pretty tasty! And since it's homemade, we can modify it next time to however we want.
Alli likes it light on the peppermint, but it still has a very good flavor. 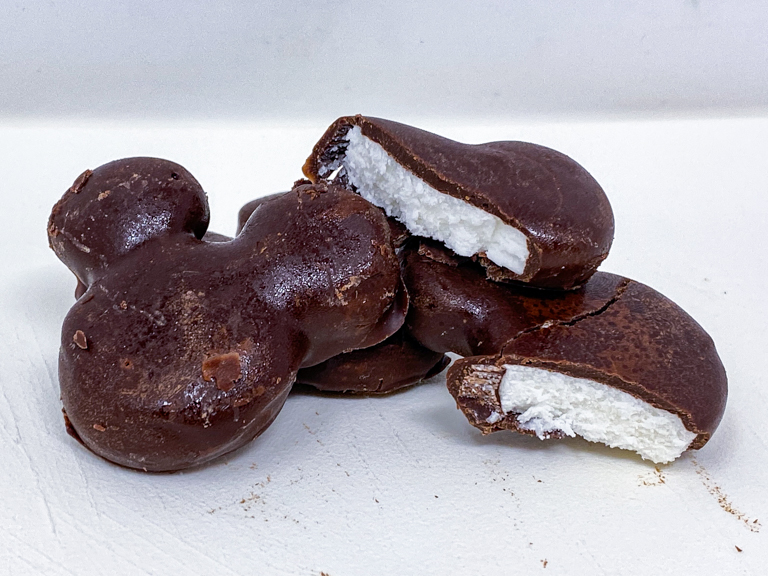 Next up are one of Theresa's favorites (or so she thinks). Dove Dark Chocolate Peppermint Bark is only available around Christmas-time each year. When it hits stores, Theresa usually gets a text from her sister and my mom, and in many cases, a package a short time later with Dove Chocolate inside. It's tasty, but it's hard to accept the $4 price tag. Theresa waits until after Christmas when it goes to 75% off and she can get each bag for $1. Then she stocks up! 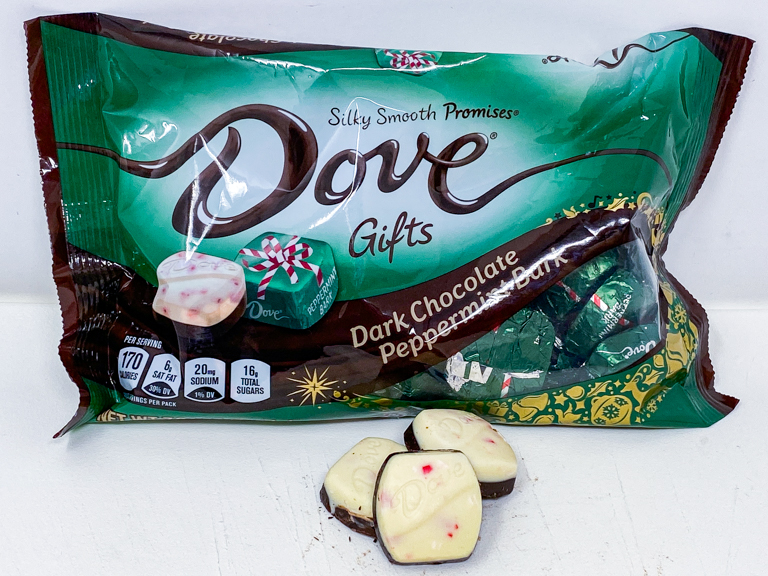 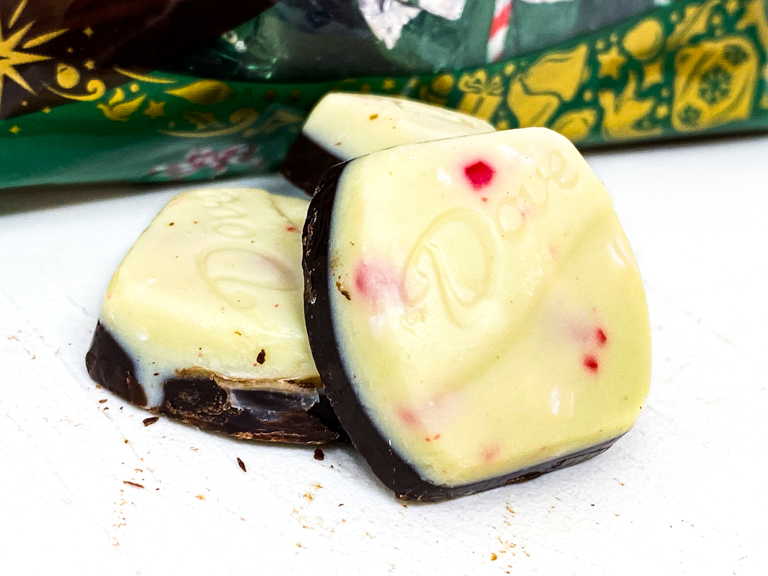 Theresa loves them and the kids have come to love them too. Mmm. Next up are Junior Mints. These dark chocolate candies circle a very gooey peppermint center. 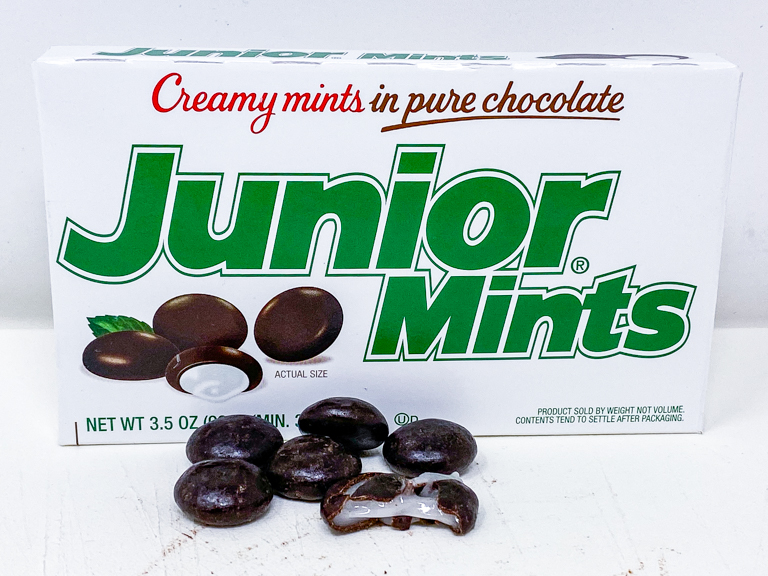 They are super creamy and delicious. 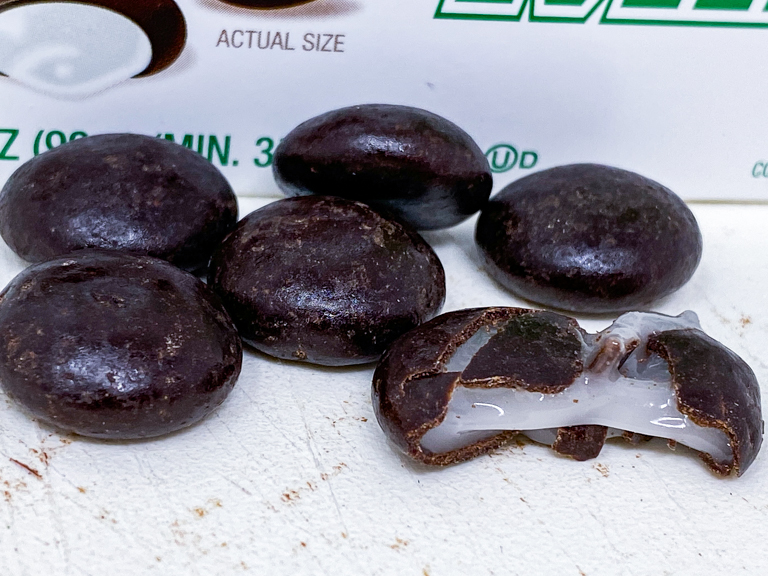 Ian grabbed a couple to start and when T questioned him on it he said, "I've had these before. I know I'm going to like them." Alli followed and grabbed a few to start. 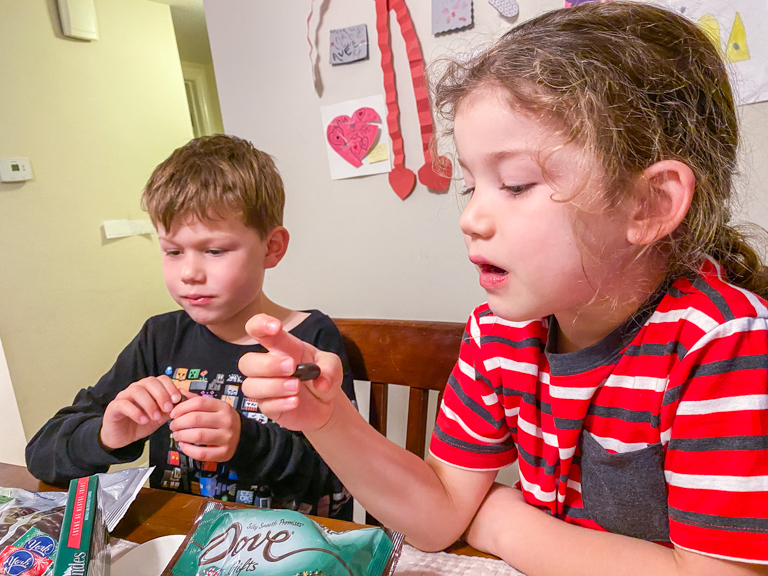 So there's an interesting story behind these After Eight Mint Chocolate Thins. When I was coming up with the idea for this comparison, I was thinking about all the different chocolate mints I could remember. There's the obvious ones up above, but there was one special one that I wanted to try to find.
In the deep corners of my mind, I remembered having After Eight mints when I was growing up. I remember them being a special treat because they came in individual envelopes, and I thought I remembered my Mom loving them. 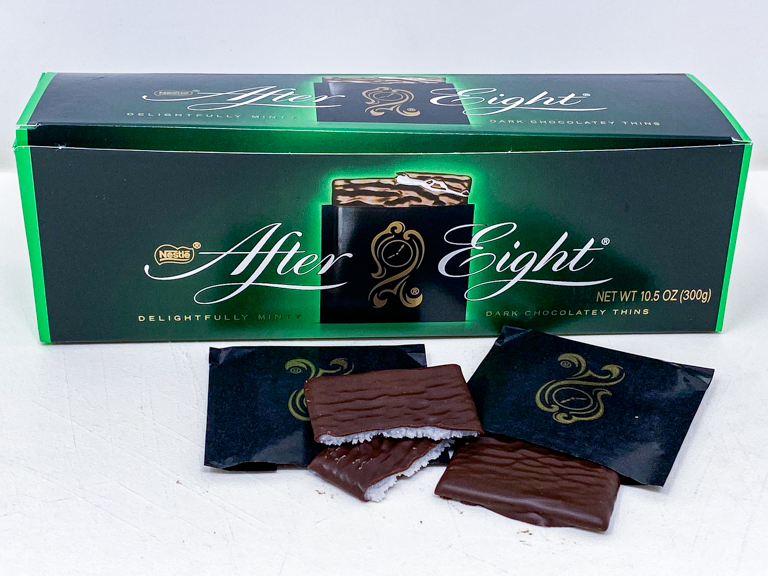 I searched high and low for them, but they were sold out almost everywhere. They are manufactured in England, so they must have been a little more difficult to acquire.
The places that did have them were resellers who wanted extremely high prices for them. I was resigned to just doing the taste test without them. 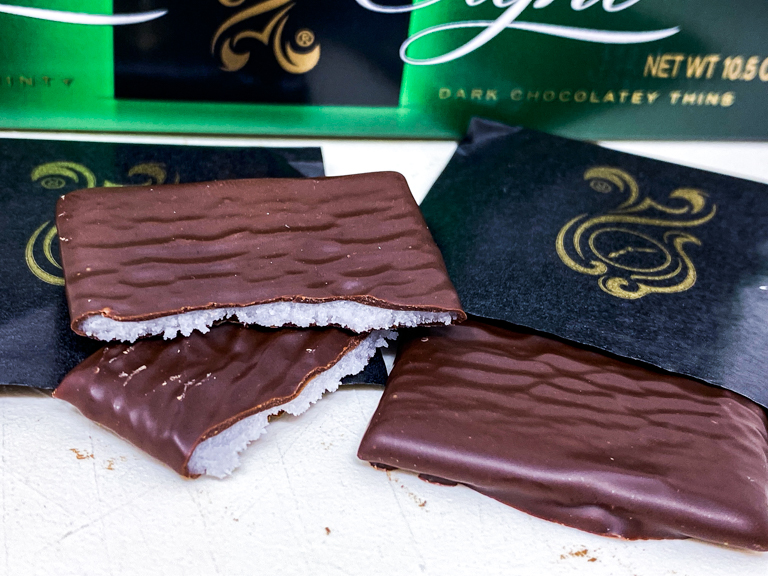 Then, 2 days before I planned to have the taste test, they came into stock at my local World Market! Still fairly expensive, but success! I finally found them! After the taste test, I sent my Mom a text saying that we had a chocolate mint taste test and that I had found these After Eight Mints. My memories were not very clear, because Mom said if she did like them, it was a fleeting thing and York and Junior Mints were the favorites now. Oh well, it's the <fuzzy> thought that counts, right? 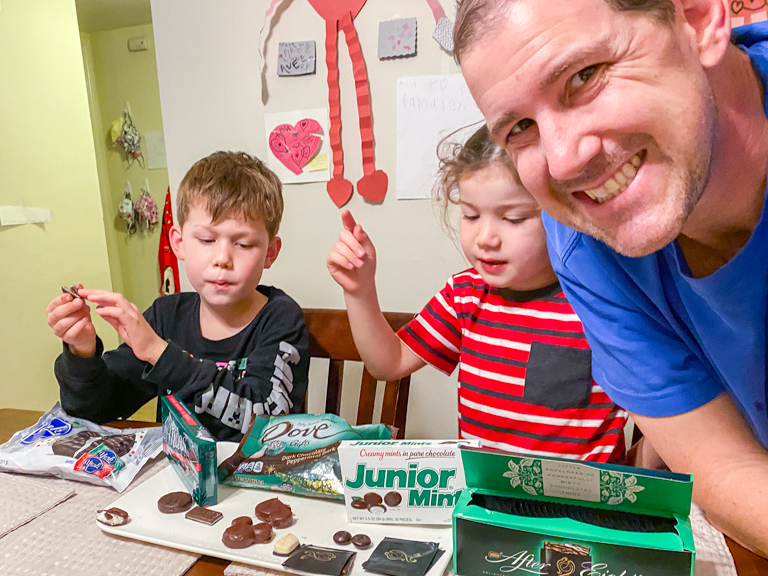 After we were done trying them all, Theresa declared that this was the best taste test we've done. It didn't have weird cereals, or other yucky flavors. She would like this kind of taste test all the time.
Our rankings from highest to lowest:
Theresa: York, Andes, Dove, Junior Mints, Alli's, After Eights
Joe: Andes Mints, Alli's, Junior Mints, York, Dove, After Eights
Ian: Most favorite - Alli's Peppermints, Least favorite - After Eights
Alli: Most favorite - Alli's Peppermints, Least favorite - After Eights
Well one thing is certainly clear. The After Eight Mint Chocolates are our least favorite of all 6 that we tried. Now maybe there's a good reason it wasn't my Mom's favorite.
It's hard to pinpoint exactly why. I'm eating them again while I'm writing this up, and they certainly aren't bad. They're just not as good as the others.
This was a fun one! 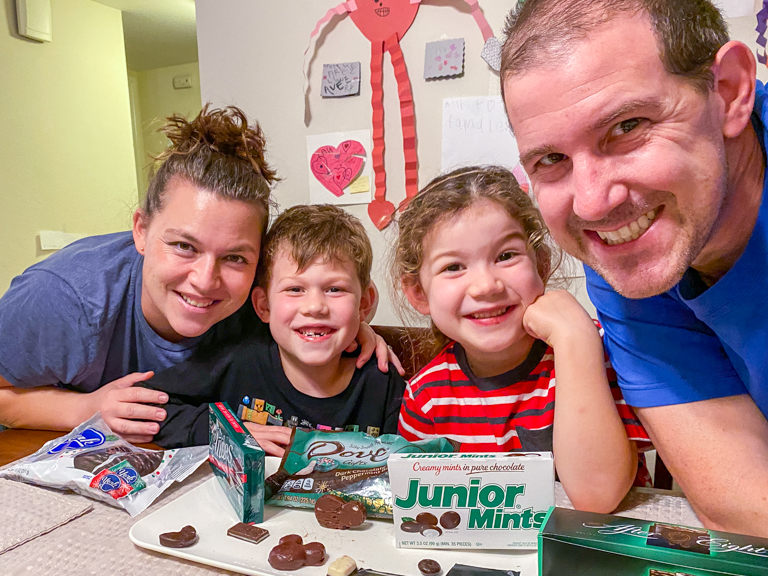