Fear - What the heck is that?
Joy - Who puts broccoli on Pizza?
Disgust - That's it. I'm done.
Anger - Congratulations San Francisco, you've ruined pizza! First the Hawaiians, and now you!

For today's pizza we're paying tribute to the Disney movie Inside Out. 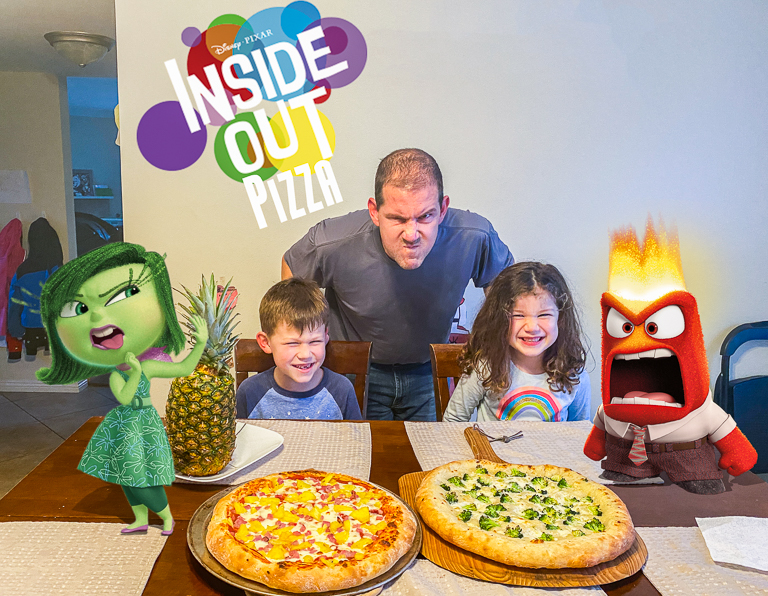 In that movie, Riley has just moved to a new city. She suggests going to get pizza, but the crazy pizza shop in San Francisco only puts broccoli on their pizzas. Eww.
Today we're going to make both the Broccoli pizza and that dreaded Hawaiian pizza that Anger hates. Plus I'm making a bonus pepperoni pizza for Ian. Three crusts, all made from my own pizza dough. 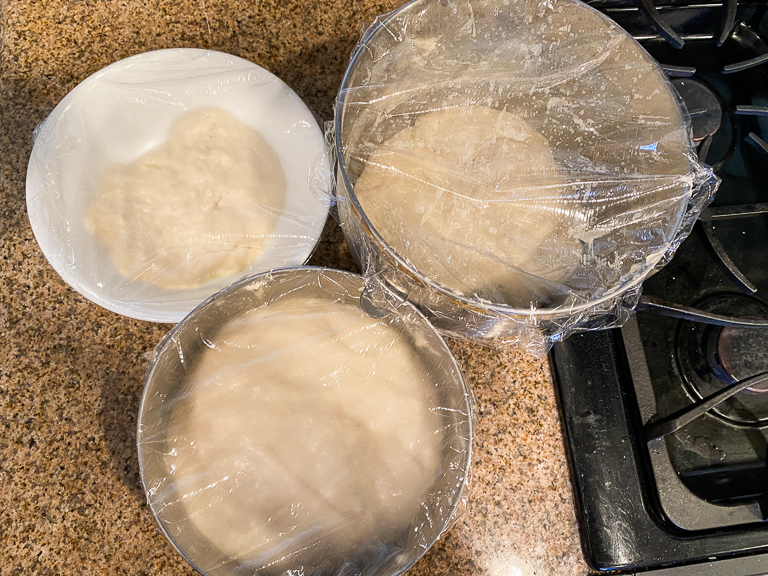 For our first topping, we'll be using this crown of broccoli. Theresa cut me a few florets, enough to cover the entire top of a pizza. 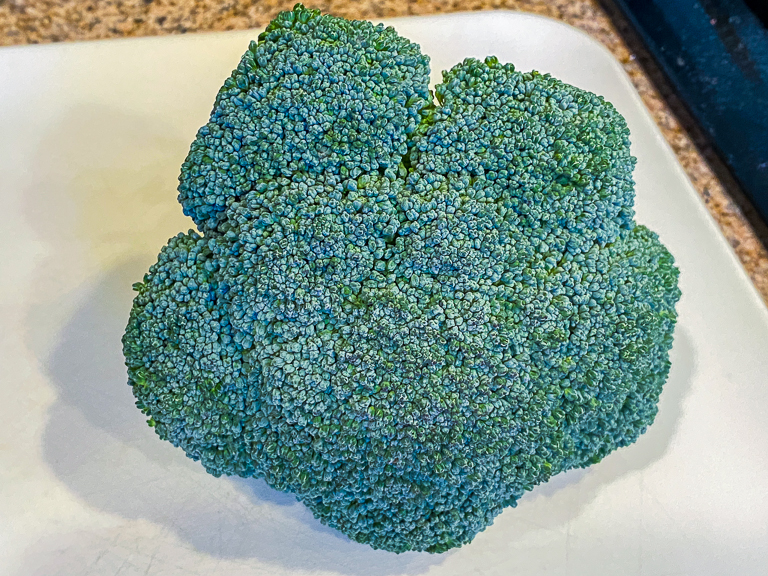 Pretty much all the broccoli pizza recipes I'm finding online don't have any red sauce on them. I'm making up my own recipe for the toppings, combining olive oil and garlic, Alfredo sauce, a little mozzarella, and then broccoli on top. 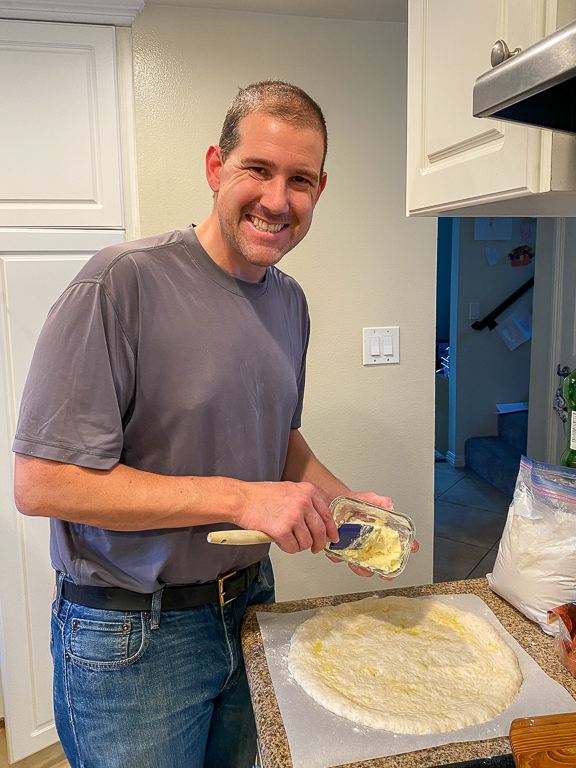 Here's what it looked like when I was done. Eww. 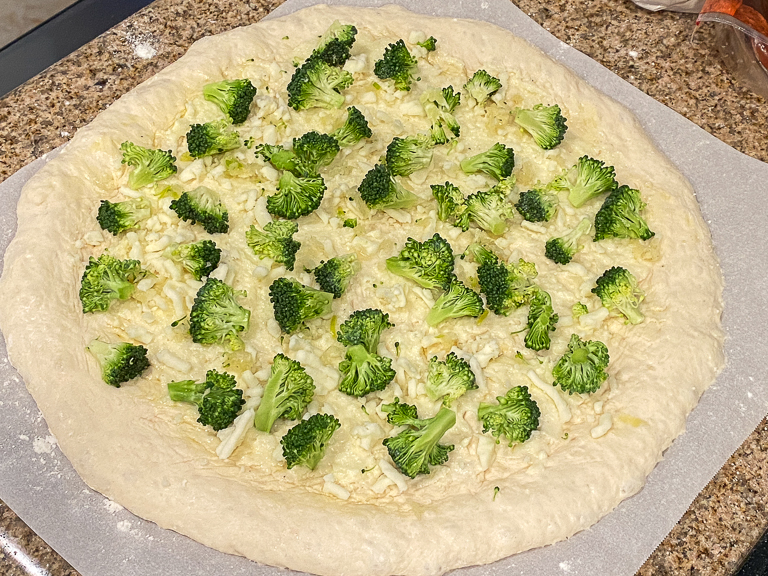 For our Hawaiian pizza I'm using ham we diced from a big chunk of boneless carver ham, plus a fresh pineapple! 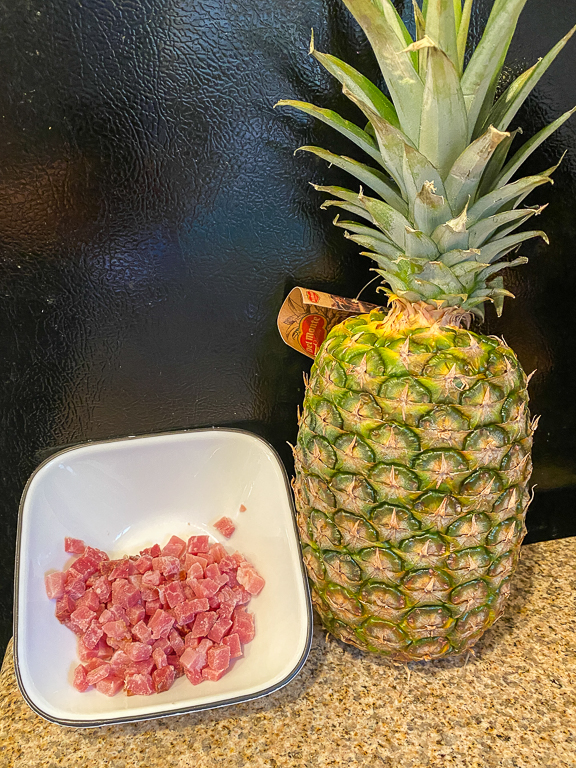 I'll be using this pineapple slicer that works so well. 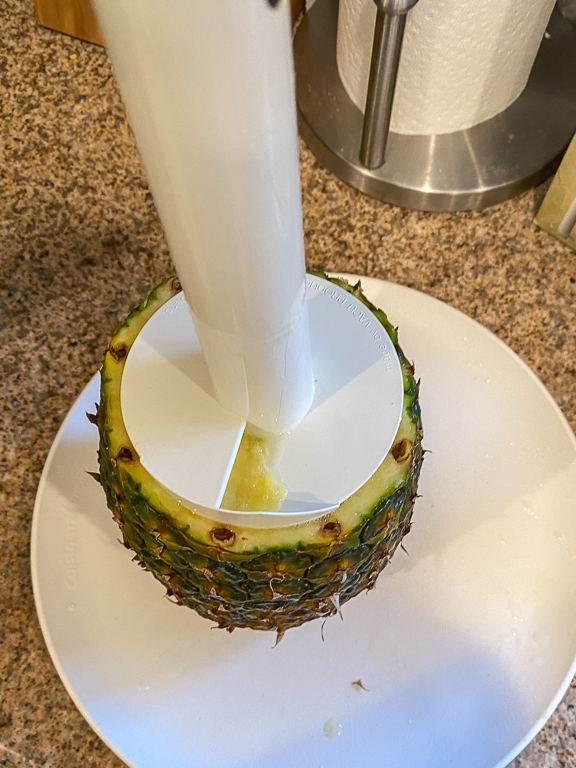 Give it a twist and it'll cut pineapple rings all the way down, with the added benefit of removing the core. When you give to the bottom, just give it a twist while you're pulling it up. You'll be left with a big spiral of pineapple and a bunch of leftover pineapple juice! 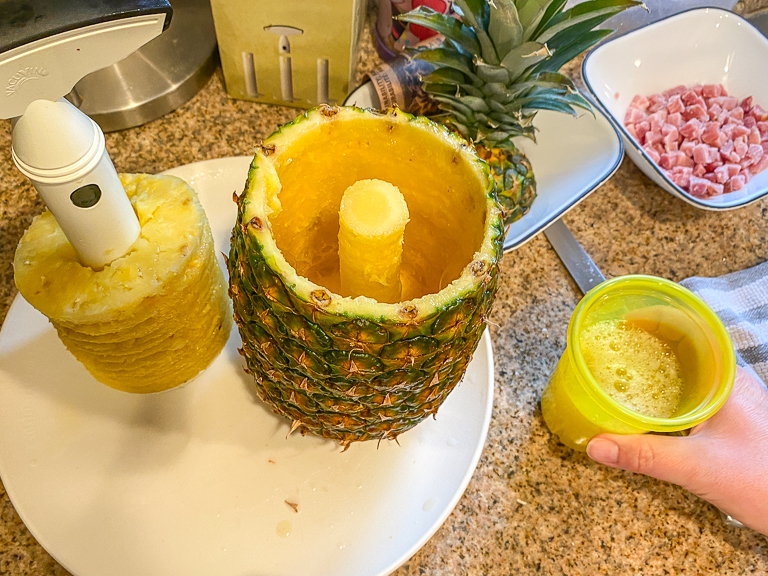 Someone snuck in and grabbed it. And wow, this is a really good pineapple. Super sweet, and the juice is delicious too. Theresa compared it to the fresh pineapple juice we've had in Tahiti and Bora Bora. It's really good. 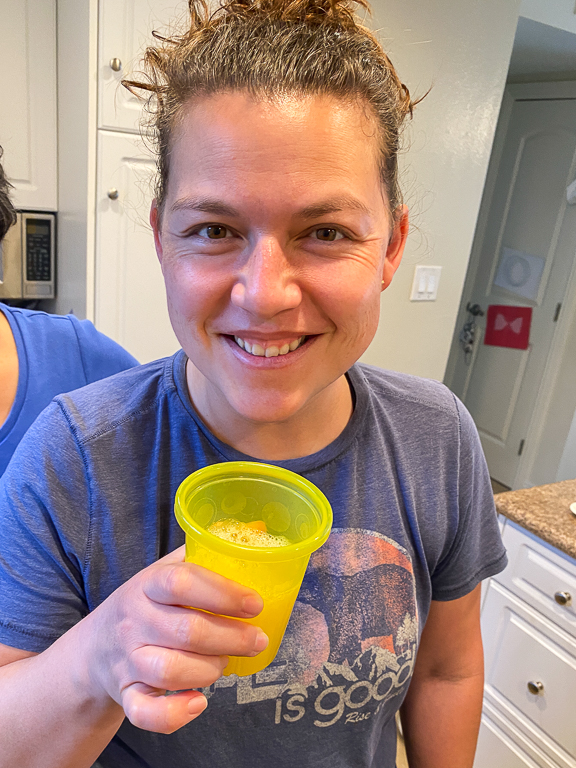 That got cubed and then combined with the ham, mozzarella, and a little homemade pizza sauce. Into the oven it goes! 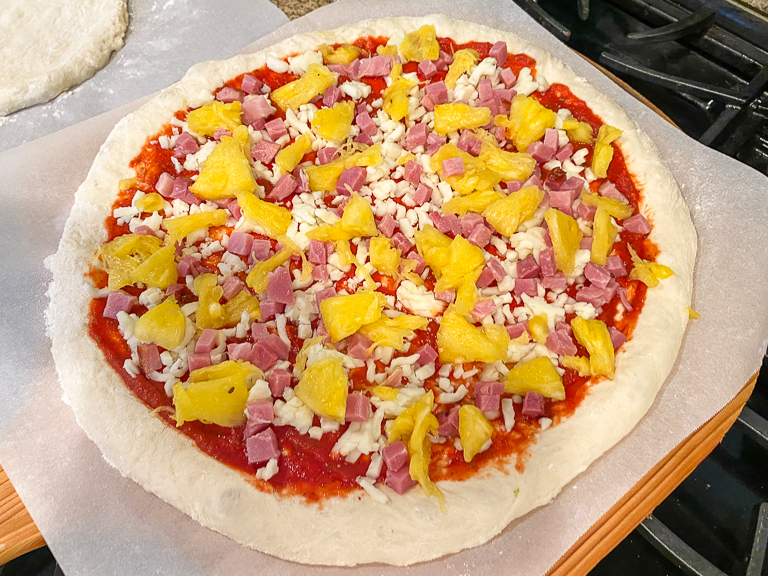 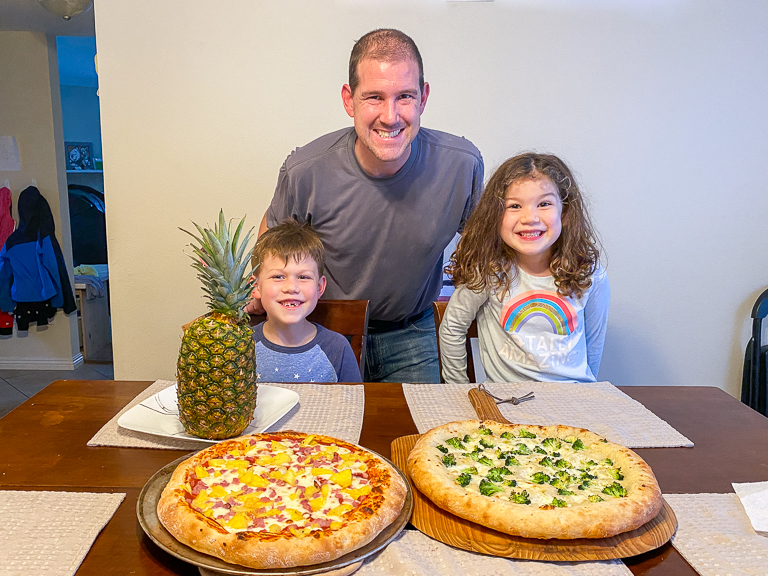 A look at our homemade Broccoli pizza. 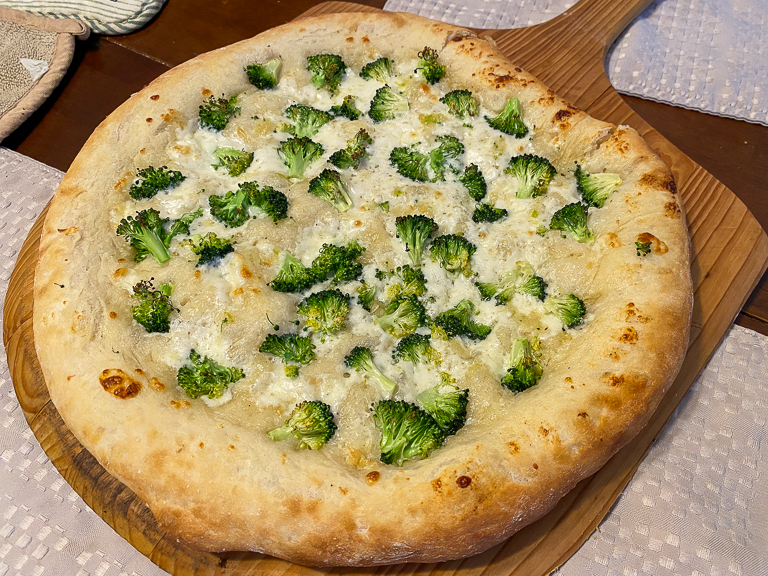 And our homemade Hawaiian pizza. 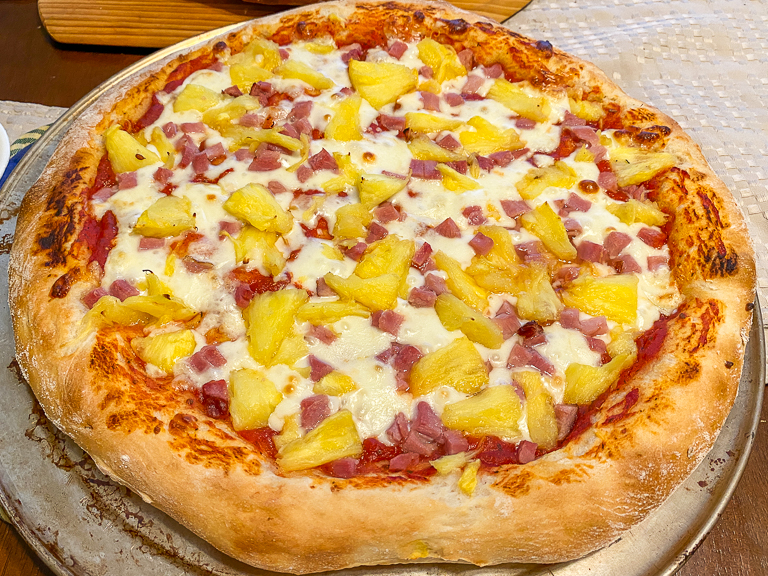 My plate tonight. A little of each. 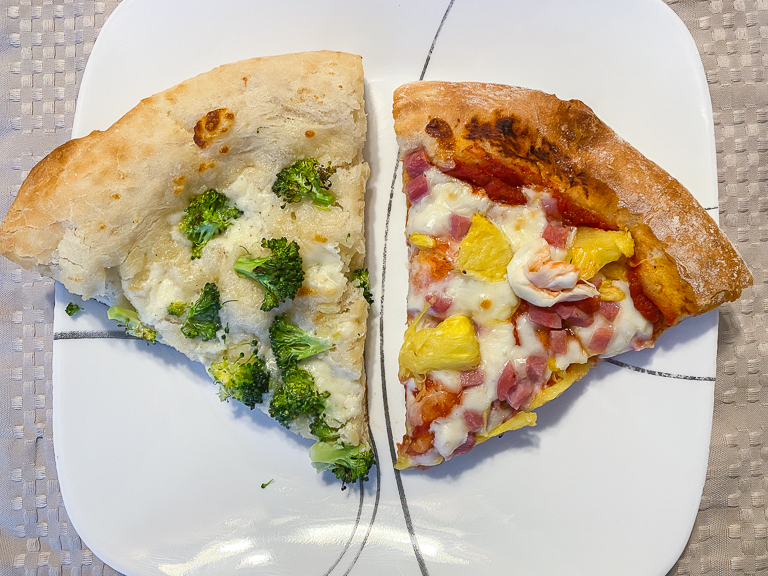 Pizza day is good no matter what we're having. The Hawaiian pizza is a favorite of this family all the time. We love pineapples and putting them on pizza tastes just fine to us.
I thought the broccoli pizza tasted just fine. It's not my favorite, but it's not terrible either. It tastes like broccoli. I'd seen discussions on whether to steam the broccoli or not. I opted not to steam it tonight, but if I were to do it again, I would steam it before it goes on the pizza.
Tonight's dinner was fun! 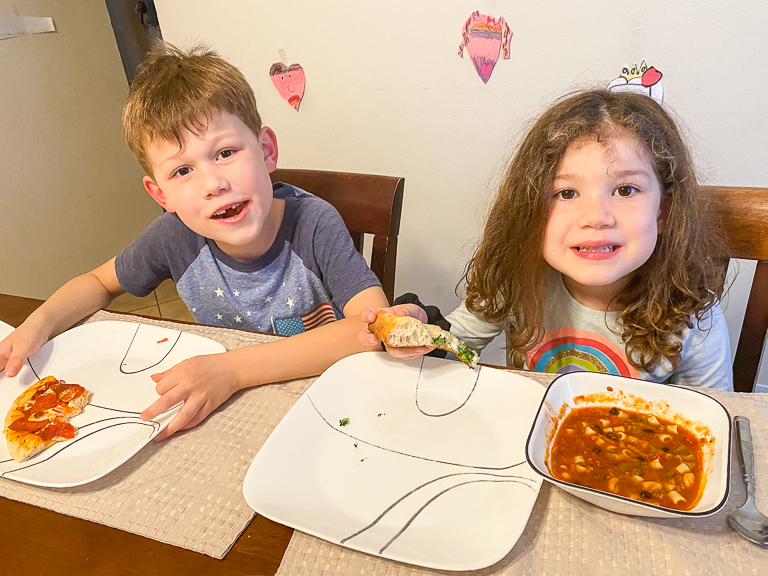