Do a search on google for "World's Best Chocolate" and you'll find French Chocolatier Michel Cluizel high on that list. Today we're tasting 6 or 7 different flavors! 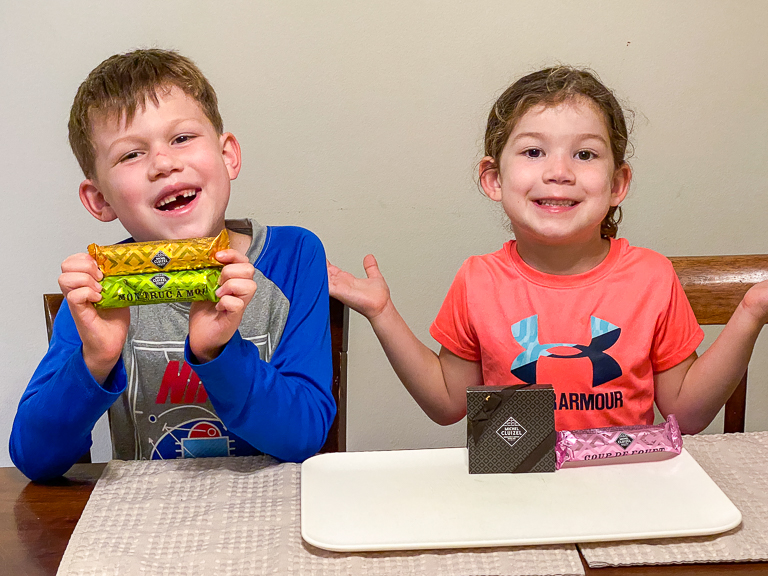 While we were visiting Paris back in 2019, we were able to visit one of his Chocolaterie's.
One of these days, I'll have enough time to finish my 2018 Asia Trip Report, and then think about getting started on our 2019 Paris Trip Report. 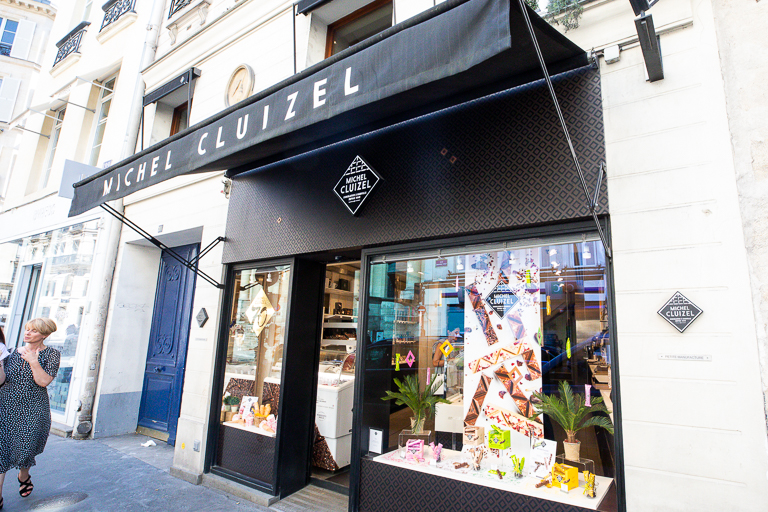 Inside, they have an abundant selection of chocolate. We bought a bunch to taste test with the family that night, but we also bought a few bars to bring home. Apparently we didn't eat them all, because I found a few and decided we should turn it into a taste test. 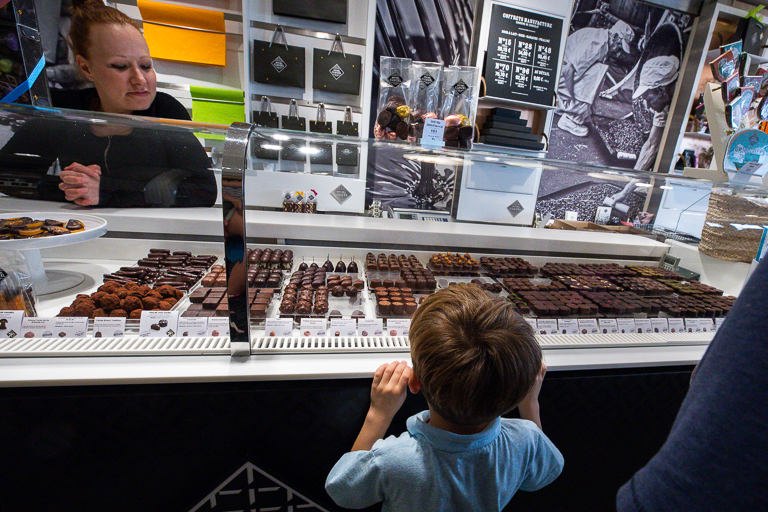 And you thought Willy Wonka was the only person who mixed their chocolate by waterfall. 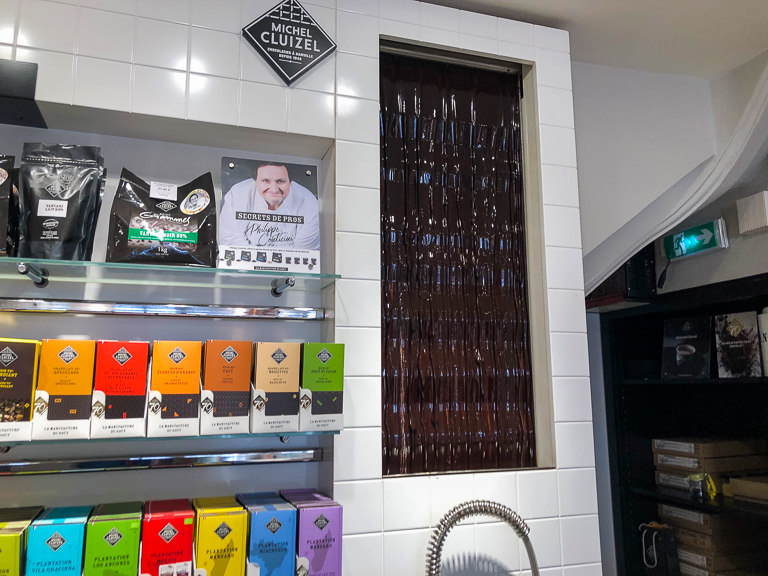 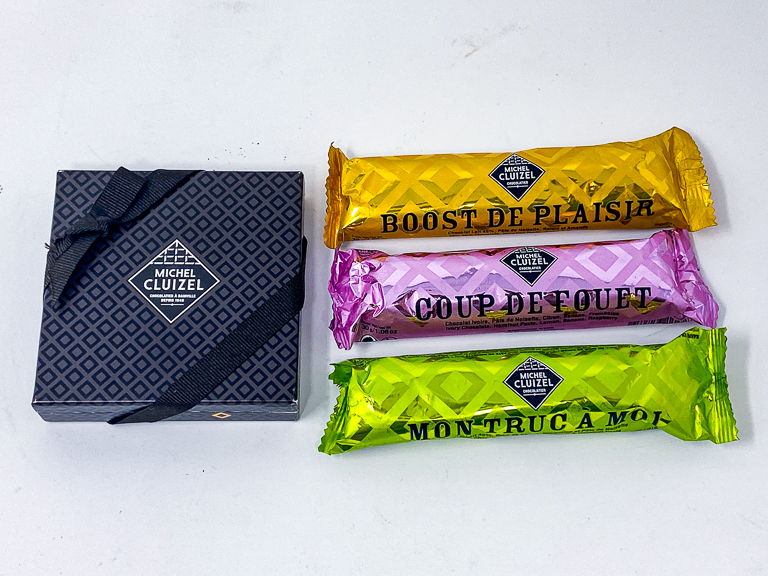 Out of their wrappers. 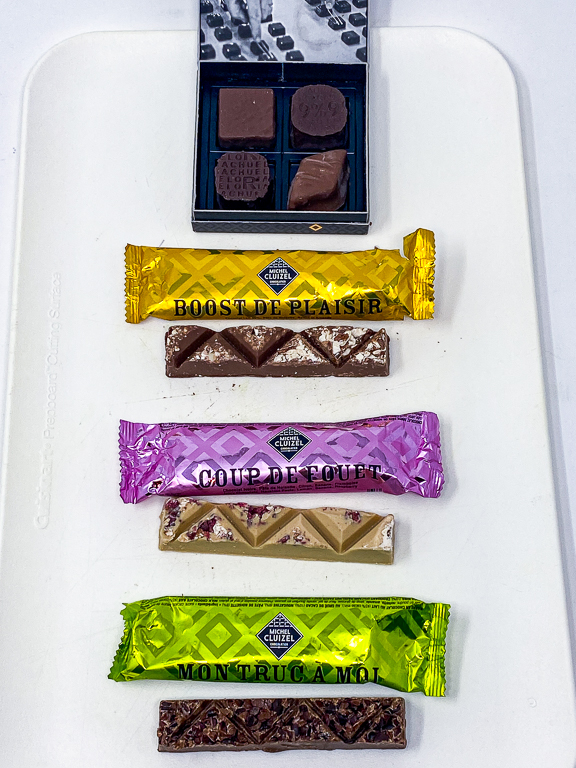 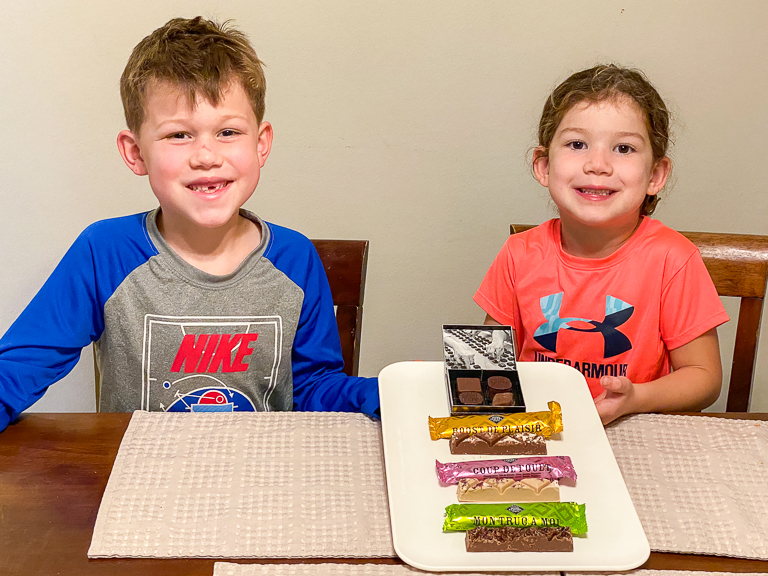 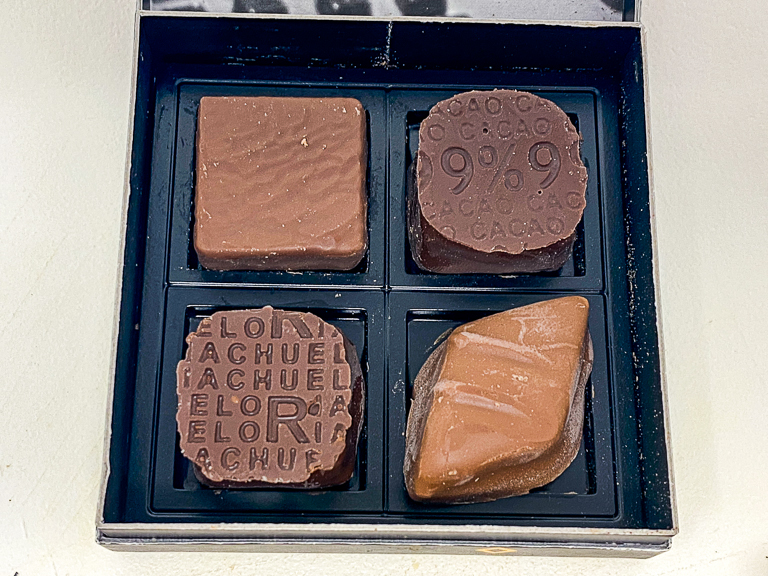 Cutting each piece into fourths for everyone to try.
The two dark chocolate pieces are on the top, and they tasted similar if not identical. Ian and I both detected some honey notes to it. The chocolate itself was very creamy and smooth.
There was a milk chocolate with gooey caramel that was also very delicious.
The last milk chocolate piece we think had bits of almond and hazelnut, and wasn't our favorite. 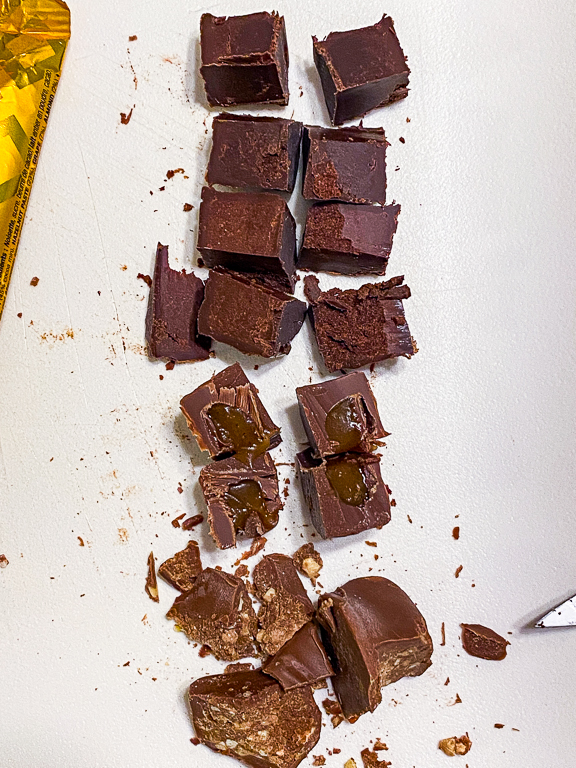 Next we tried this Boost De Plaisir (translated Pleasure Boost) bar. According to the bar wrapper, it's made with 45% Milk Chocolate, 23% Hazelnut Paste, 7% Grape, and 2% Almond. It's interesting that they actually put the percentages of each ingredient. Also when they said Grape, I was initially intrigued, but I think they actually mean Raisin. I know they're the same thing, but for some reason in my mind, I have positive connotations for grapes and negative connotations for raisins.
It was just alright. I prefer my hazelnuts in Nutella versus actual nuts chopped into chocolate. 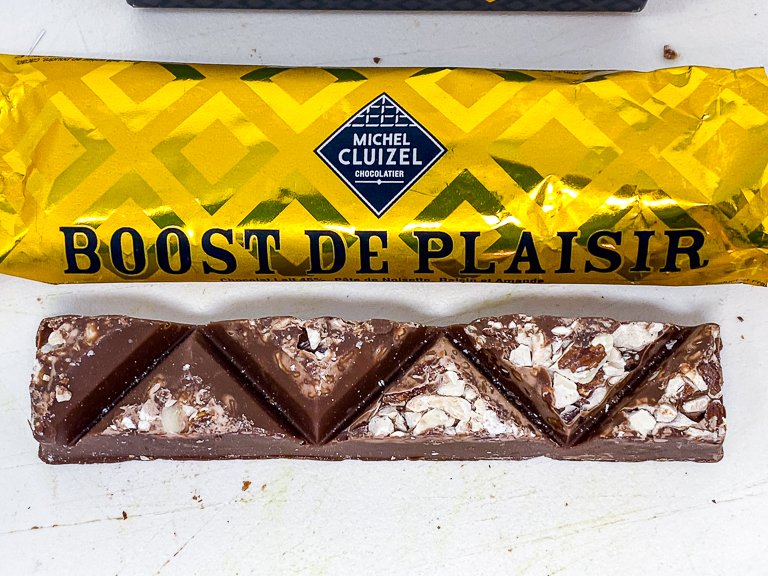 Our next bar is the Coup De Fouet (translated Whiplash). This bar is made with Ivory Chocolate, 23% Hazelnut Paste, 8% Lemon, 2% Banana, and 1% Raspberry Chips. For me, the Hazelnut again overpowers the flavor of the other ingredients. I can see there's real raspberry chips on the top, but I'm having a hard time tasting them. 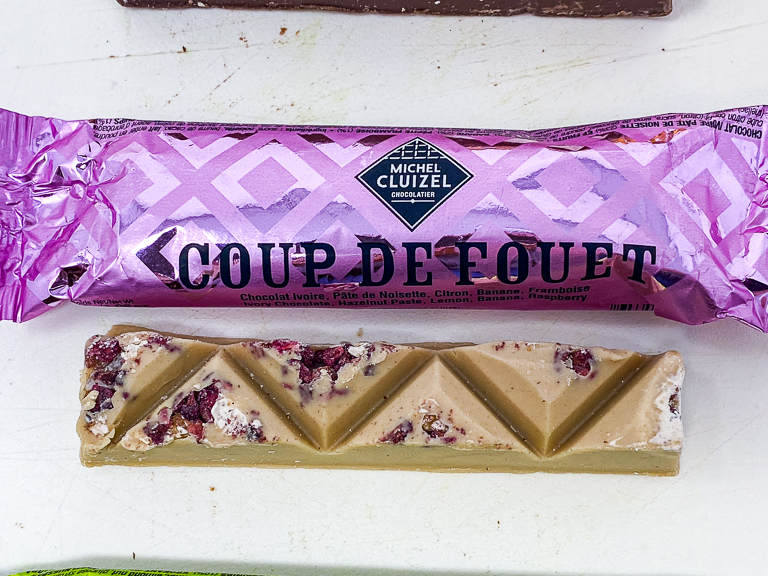 Despite the look, the kids said they liked this one. Ian and Alli both said they like the raspberry flavor. I guess they're picking it up, but I'm not having much luck. 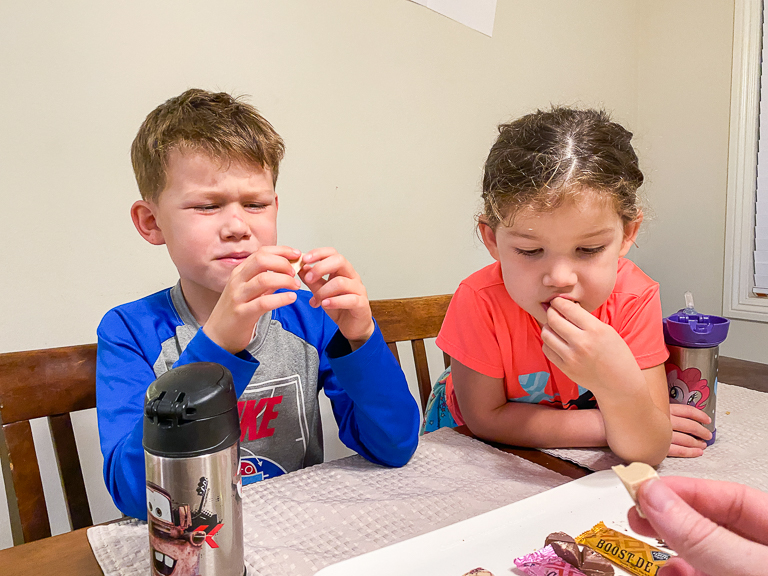 Our last bar is called Mon Truc À Moi (translated My Thing).
Side note, I don't really understand the naming of these bars. So far there's been Pleasure Boost, Whiplash, My Thing, and searching the Cluizel.us website, I see there's also Insolent Break, and Tender Moment.
Back to the bar, this one has 45% Milk Chocolate, 10% Cocoa Nibs, 8% Croquant (a type of nougat), and 8% Hazelnut Paste. Those cocoa nibs made this one very crunchy. 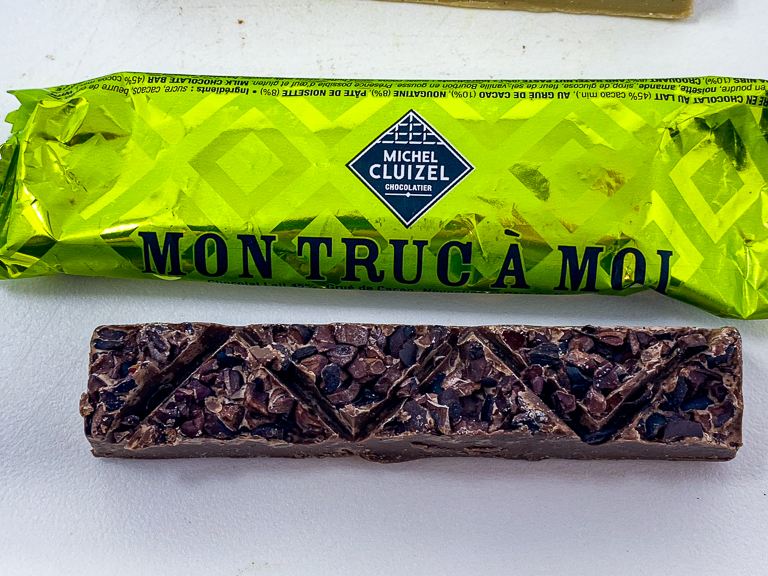 Time to vote for our favorites. The kids both liked Whiplash (the one with Raspberry Chips). Theresa and I both enjoyed the Milk Chocolate with Caramel. 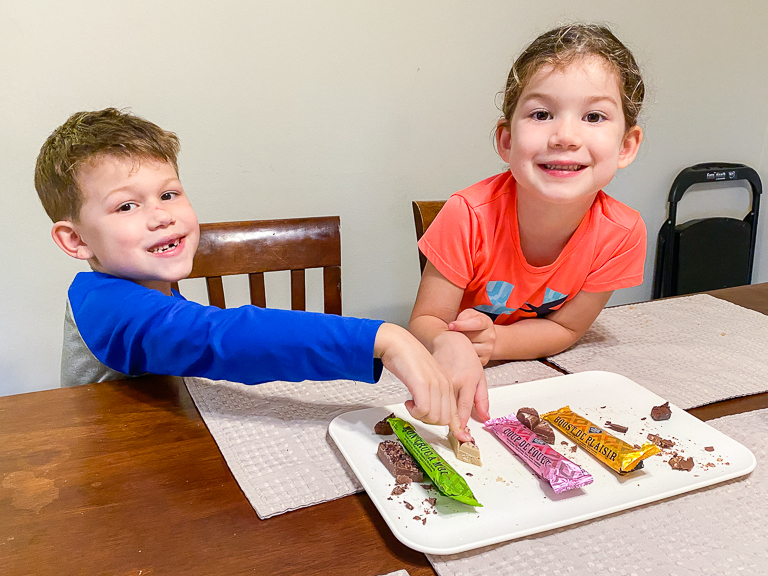 The kids asked if they could have one more piece, and once I agreed, they both went after another piece of Whiplash.
Going back and doing this chocolate taste test from France brought back some good memories. 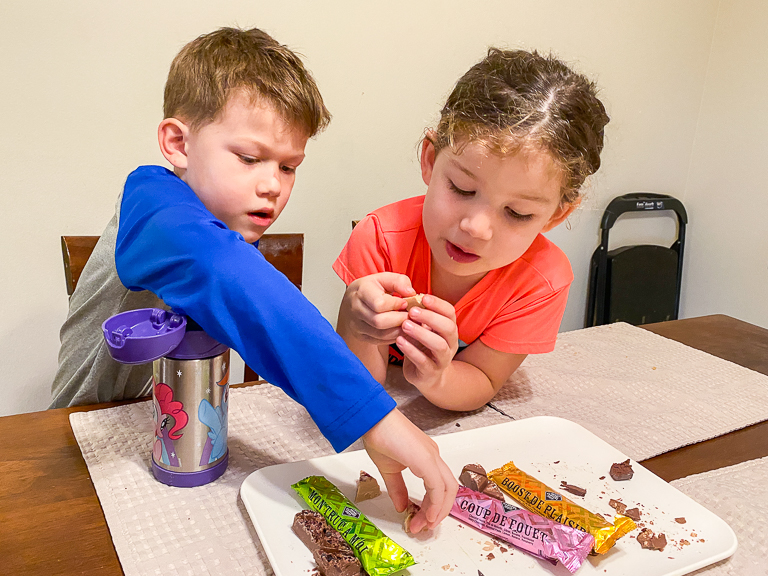