This morning we've got a very special treat! Grandpa is a big fan of the whole line of Little Debbie products. Today there's a brand new cereal from Kellogg's, and it's based on one of my favorite treats from Little Debbie. The Oatmeal Creme Pies! 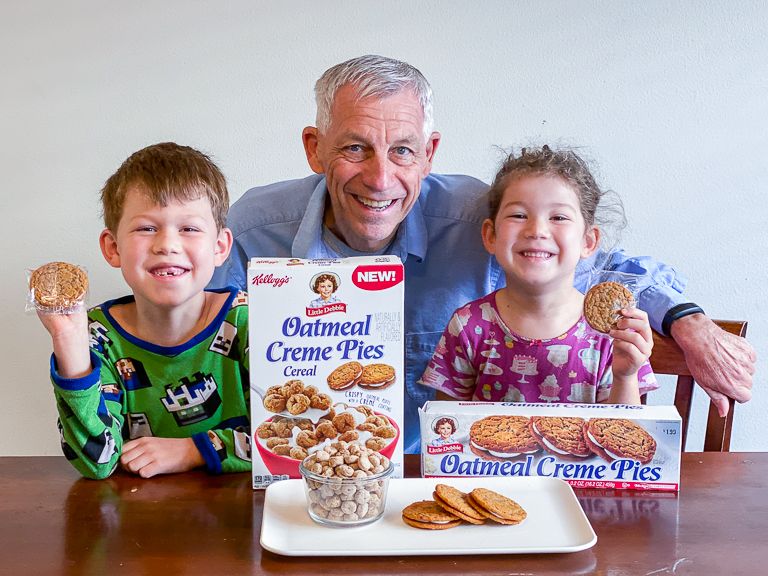 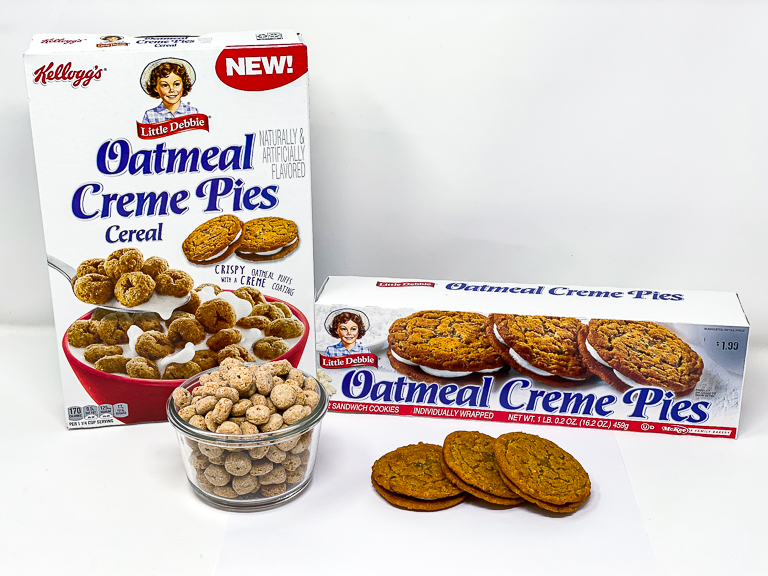 Looking at the picture on the front of the box, they appear to be a similar color to the cookies. The box promises them to be "Crispy Oatmeal Puffs with a Creme Coating." 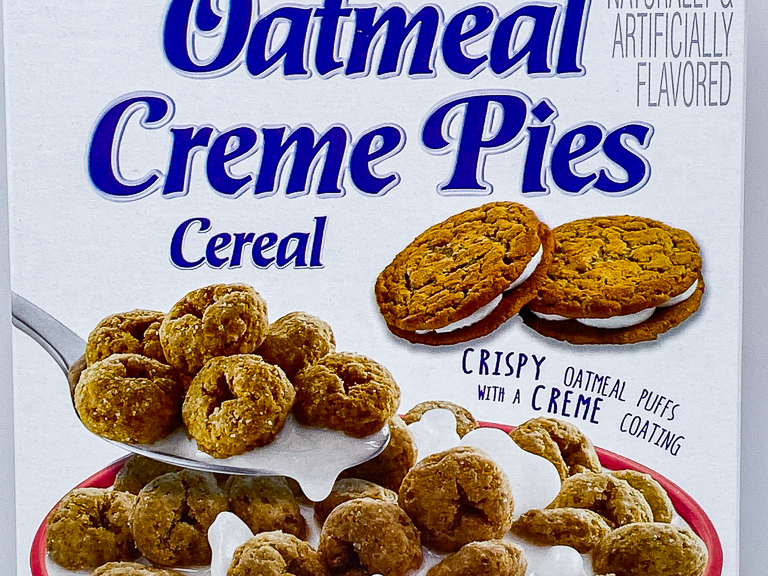 Some of the puffs seem to have a hole going through the middle on them, while others are solid like the top of a cookie. 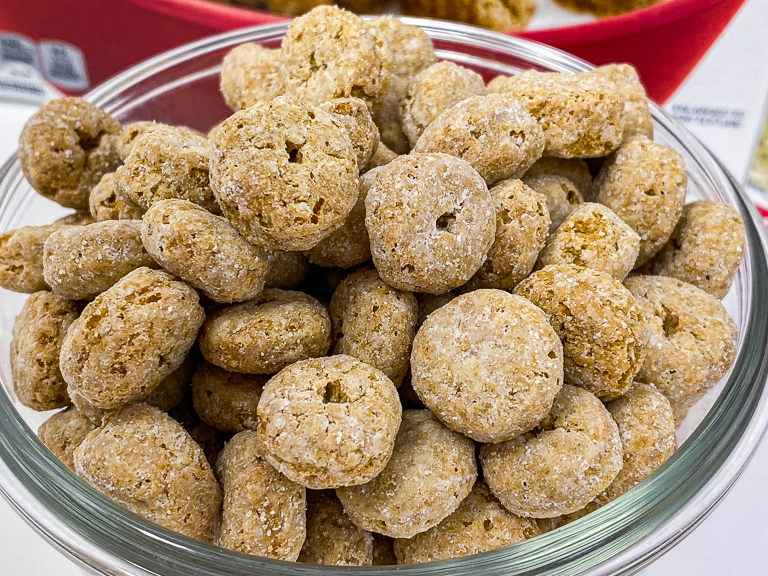 The puffs themselves are quite a bit paler than the oatmeal creme pie cookies. 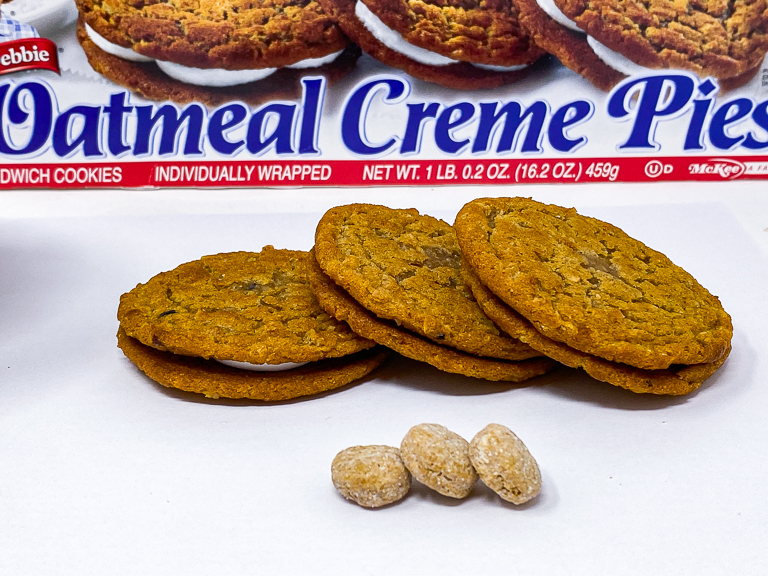 How about that Creme filling? I couldn't get a good look inside without breaking the cookie into pieces. 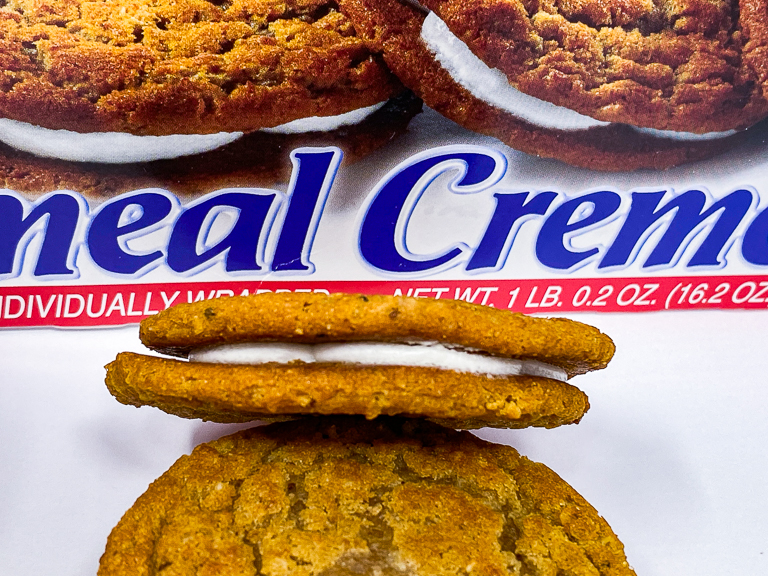 This was what was left on the bottom of the bowl when I poured the cereal out. I'm assuming it's the creme coating on the outside (which the box says is made from sugar, soybean and palm oil, non-fat milk, and more). 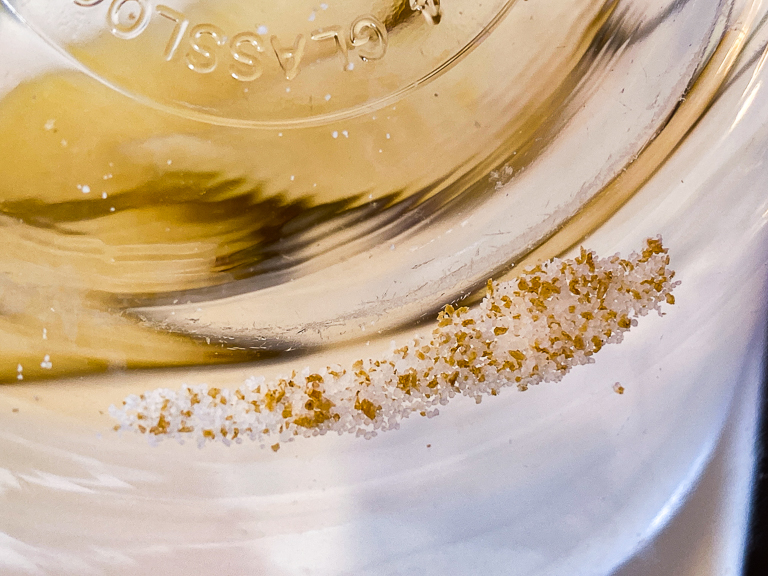 I see you trying to sneak some cereal before it's time Alli. 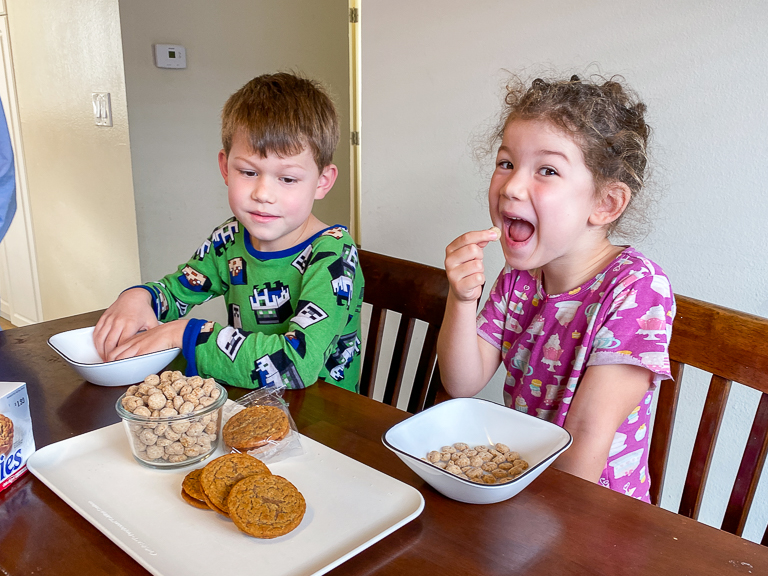 When I finally gave the all-clear and they started with the cereal. I look back at my photos and laughed at home in-sync they are.

So how is the cereal? It's a lot more puffy than I was expecting. Even lighter than say Froot Loops, which is the texture I was expecting from these. But the first thing Richard commented on when he tried them was, "Cinnamon?"
I tasted them and yeah, these do have a cinnamon flavor to them. Why do they have that? I haven't had the cookies in a while, but I don't remember cinnamon. Let's consult the ingredient list. 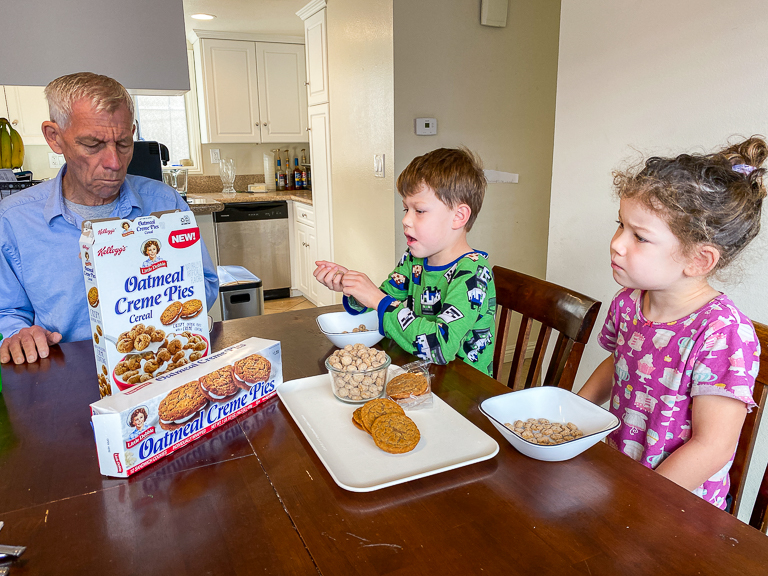 The Cookies are on the Left, while the Cereal is on the Right.
The cookies have things like molasses and raisin paste (really?), while the cereal has molasses, cinnamon, and nutmeg. So there's no cinnamon in the original cookie then. I wonder why the added it to the cereal. It's also interesting that they call the cereal "Oatmeal Puffs" when the first ingredient is Corn Meal. 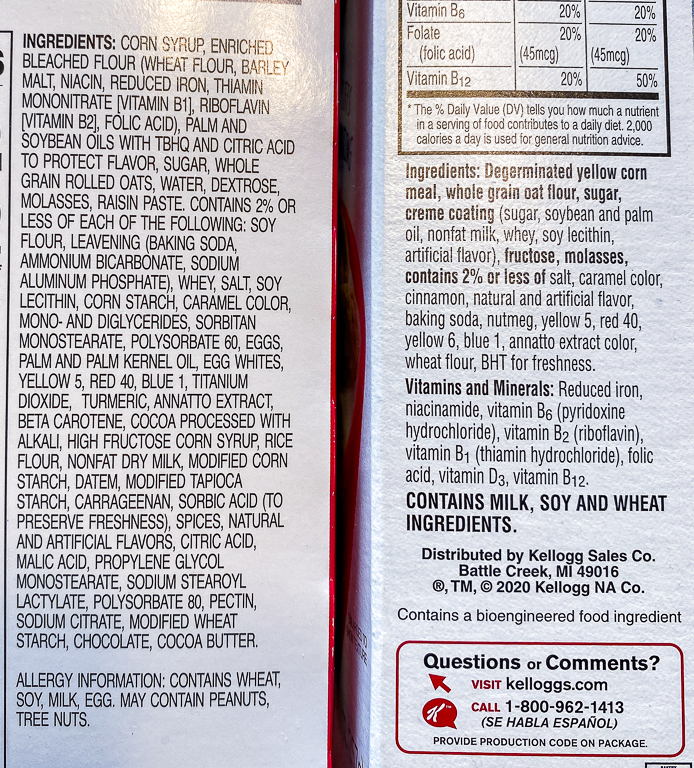 Time to eat the cookies. They're as tasty as I remember them. Very soft. 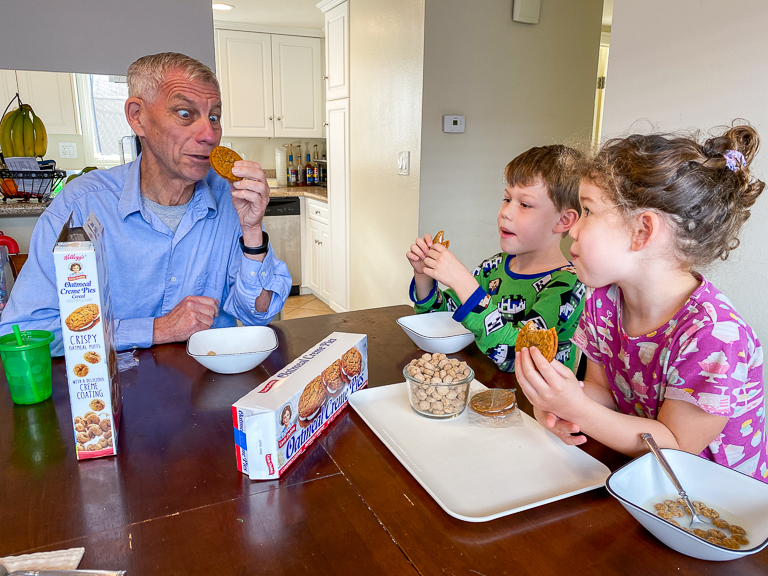 Thumbs up for the cookies, and even though the cereal doesn't quite taste like the Oatmeal Creme Pies, we still enjoy them. 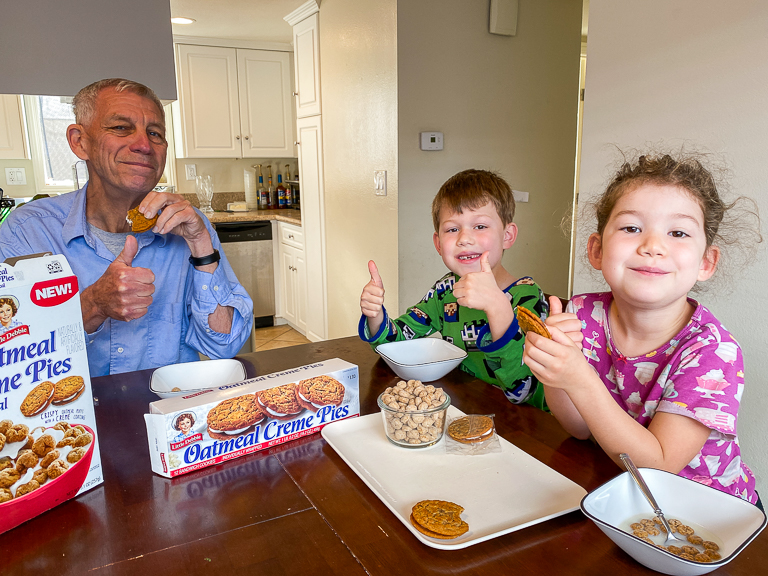 All this cereal floats pretty well since it's so puffy. 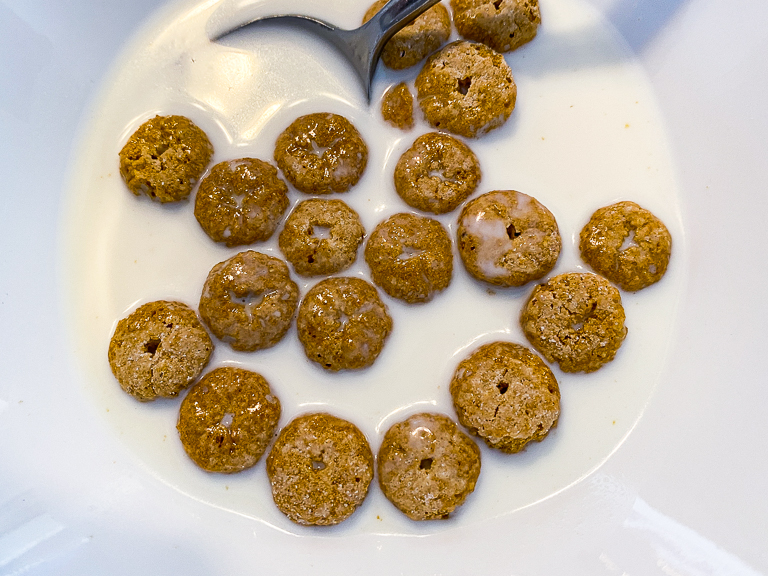 Reading the games and information on the back of the box. 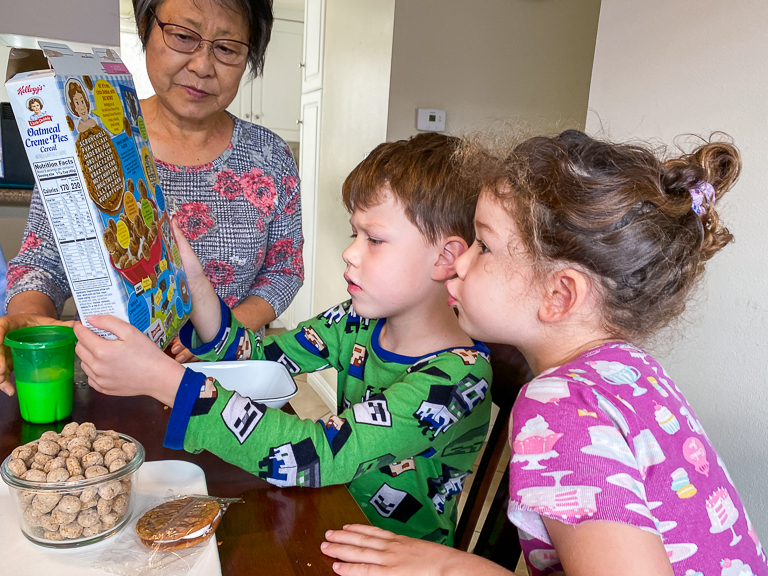 Little Debbie Oatmeal Creme Pies have been around for a long time! They were around in 1960, even before the cassette tape in 1962! Today was a fun taste test! 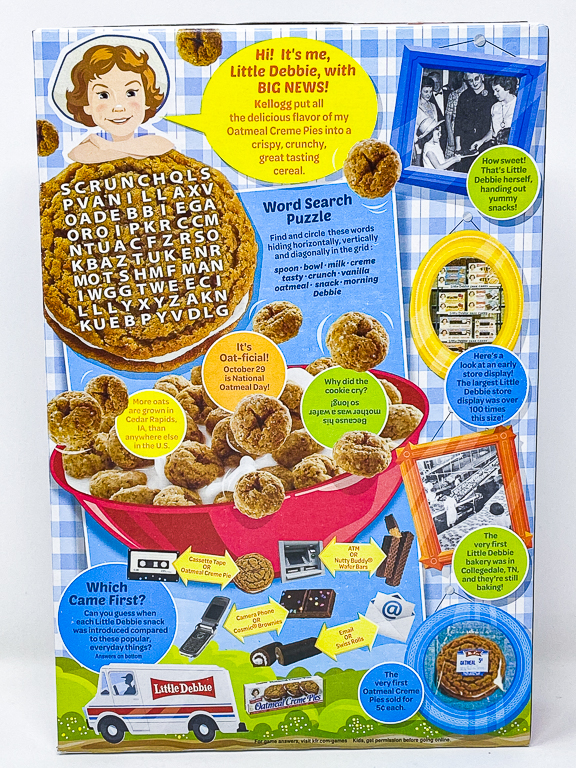