Creativity with our on-the-go water thermoses

Way back when, Theresa was looking for some water thermoses for us, especially to take with us to Disneyland. I think the deal was that she could get 4 of the regular colors for $32, or she could get 12 of this green color for $31. Guess which one she picked?

We've got no problems with the green color though. The goal all along has been to decorate these with Vinyl using the Cricut cutting machine. And along the way we get to show off some of our creativity! 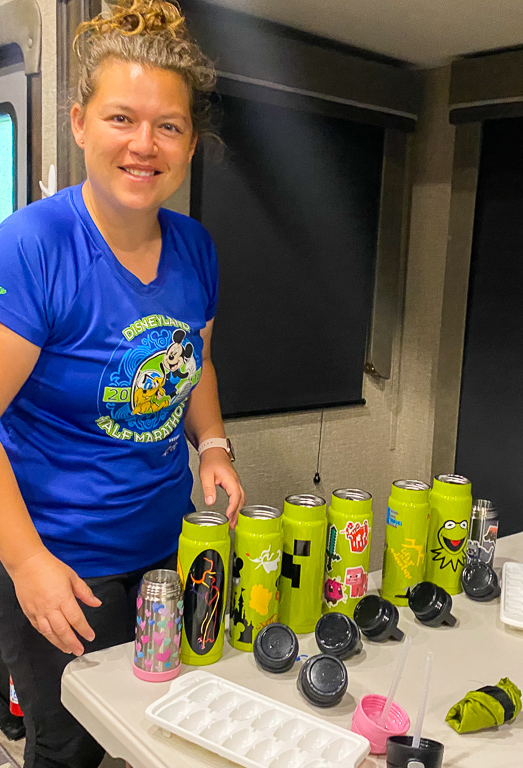 We didn't get a chance to get to it until we made it to Colorado. And while we're here, everyone else gets to show off some of their creativity too!
They tell me the designs, I work in Photoshop to get it looking its best for the actual printing. 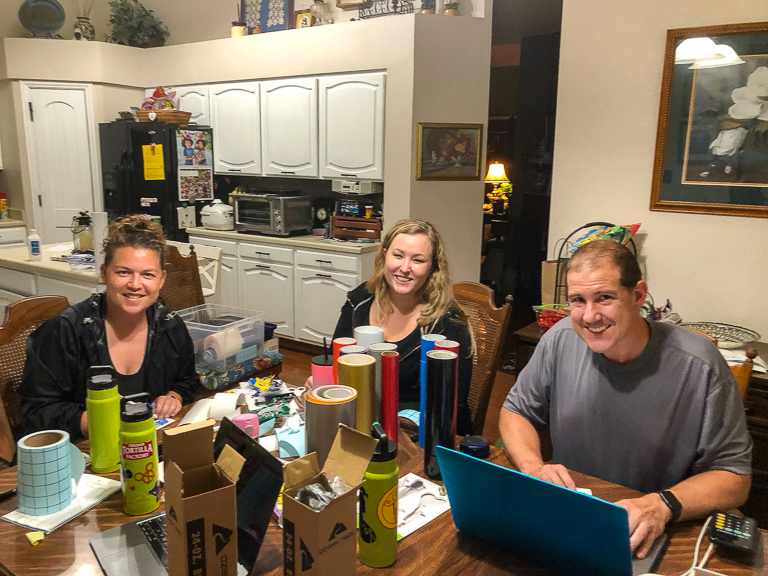 For the first one, my Dad wanted something to take with him for his trips up and down the Incline. He fills it with naturally carbonated Manitou Spring Water on the walk to the trail, then drinks it during his hike. He's doing really well now! At over 400 Incline Summits for the year and improving his time to just over 30 minutes to climb it! 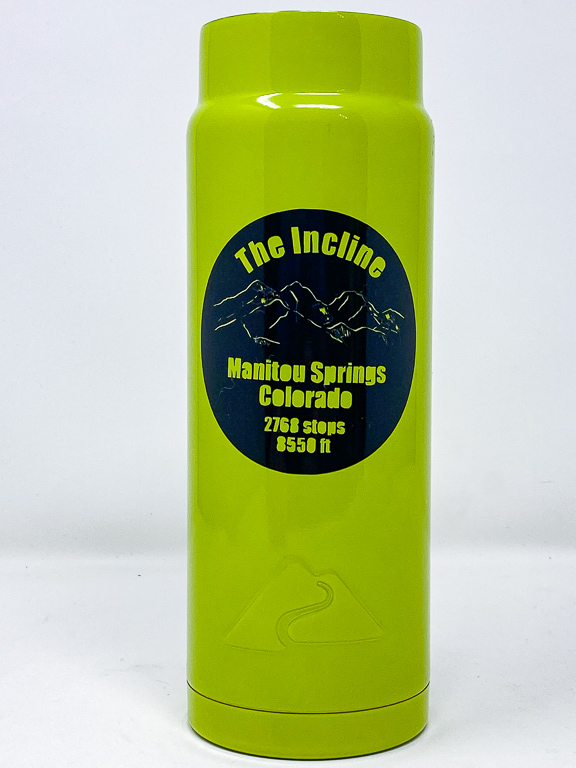 Gram has some ideas for hers. 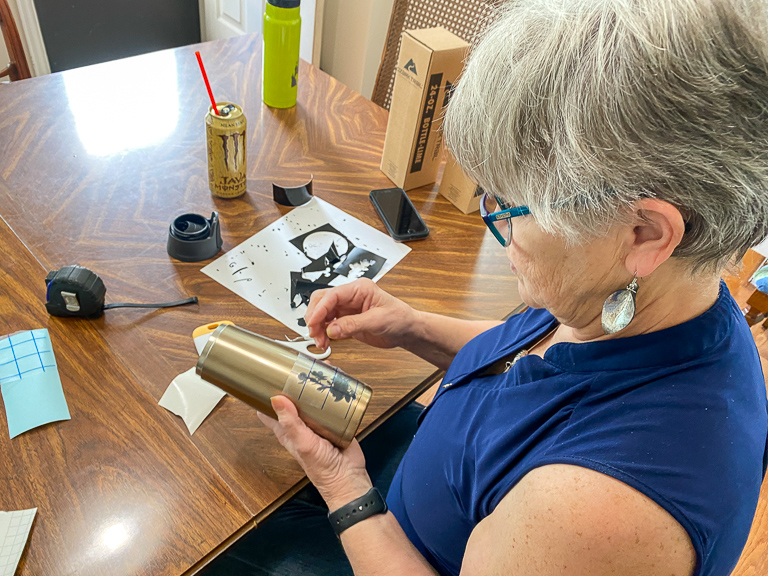 The first one is a simple design with a flower silhouette and an initial. 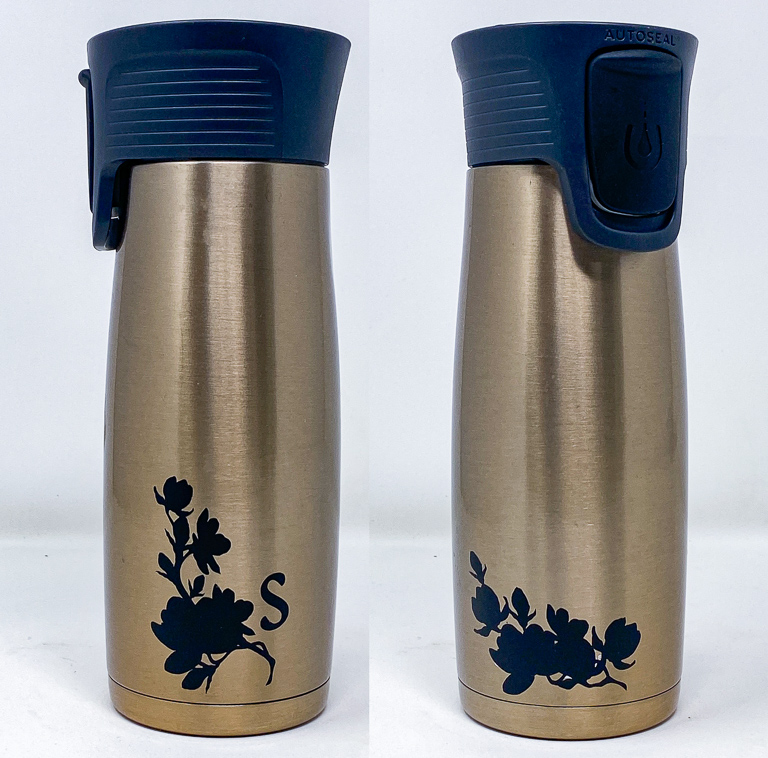 For her second mug, it looks like a winter scene with snowflakes falling over some pine trees. But a twist reveals a girl blowing dandelions. I thought this was very creative.

For my brother, he's a fan of the Duke Blue Devils, as well as the Mandalorian. 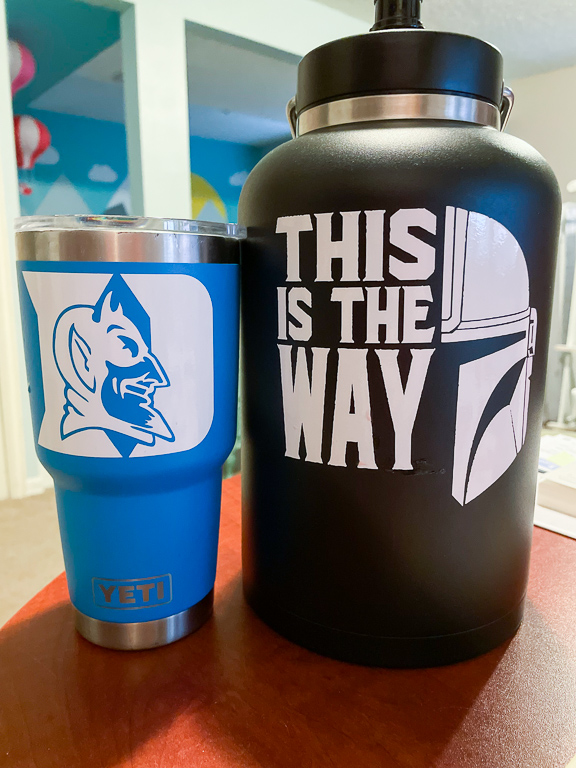 And on the back, a Star Wars Rebel/Empire symbol. 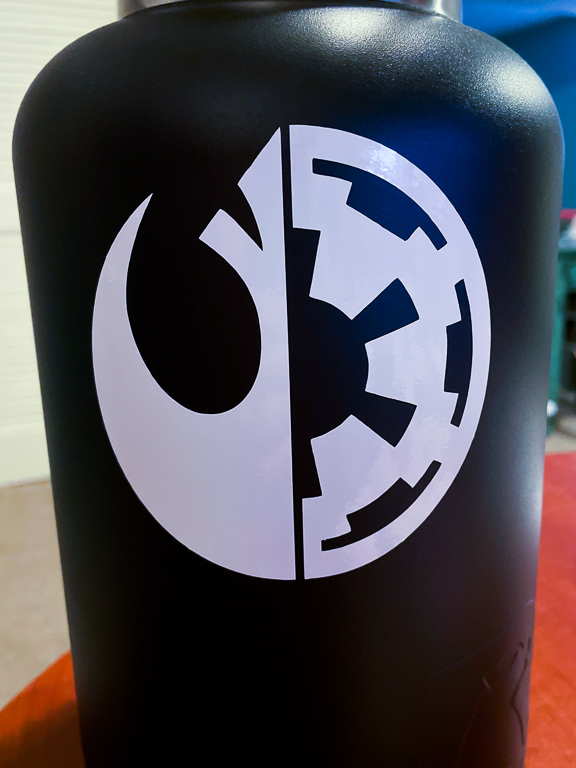 Theresa had some really awesome ideas. This one pays tribute to some of the things she loves the most about Disneyland. I see a bunch of snacks on there.
You might think the castle is the centerpiece, but no, the main thing here is the old Mission Tortilla Factory. Man I miss that place. There's also Mickey Pretzels, Buzz Lightyear (for Space Ranger Spin and Toy Story Mania), Dole Whip, A Mickey Bar, a Steamboat Mickey Popcorn Bucket (because it could be refilled for $1), the Castle, Pooh (for the Many Adventures of Winnie the Pooh - her favorite ride), Zero (for the Nightmare Before Christmas overlay of the Haunted Mansion), Tow Mater (because Cars Land is super detailed and just awesome), and a Mickey Caramel Apple. I love it Theresa!

And for her second mug, she's all about travel and life on the road. There's a silhouette of an RV among the trees and mountains. Plus lots of inspirational sayings like "Oh the places you'll go!" "It's Time for a Road Trip" "I haven't been everywhere, but it's on my list." and more.

For my sister-in-law Megan, every day could be Taco Tuesday for her. 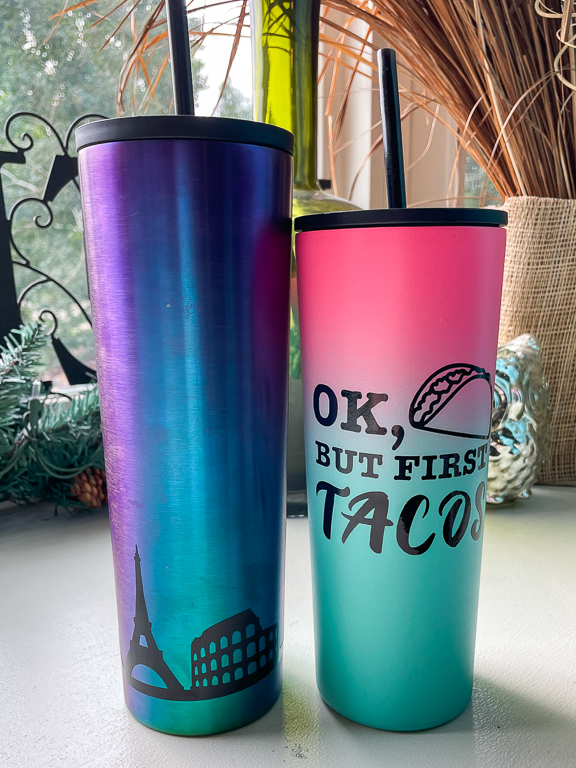 And her other mug pays tribute to all the different places she's traveled. There's Pisa, the Palazzo Vecchio in Florence, the Duomo in Florence, the Eiffel Tower, the Colosseum, and Big Ben (kind of the leaning tower of Big Ben because it tilted when I applied it). 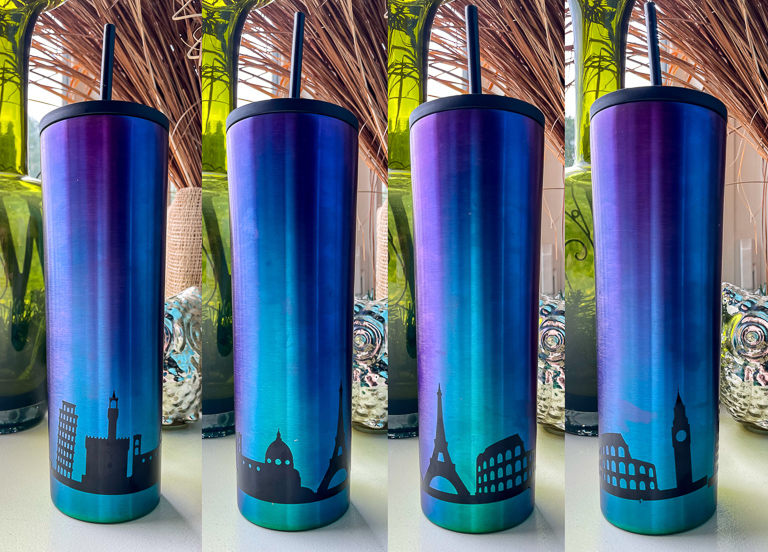 The kids love Minecraft. We bought them some stickers and they went crazy.

I also made them a Minecraft mug with the symbol and a Creeper on it. 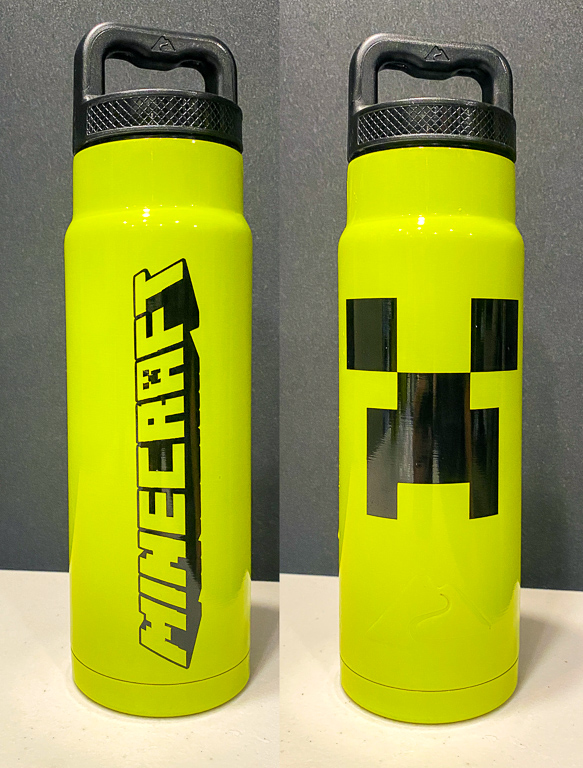 For myself, I made a mug with my two favorite characters. Hercules, the Hercules medallion, and Jessica Rabbit. I really thought I had a flesh color vinyl for her skin. I ended up having to go with something else. I picked yellow, but now I just think it looks like a Jessica Rabbit crossed with The Simpsons. 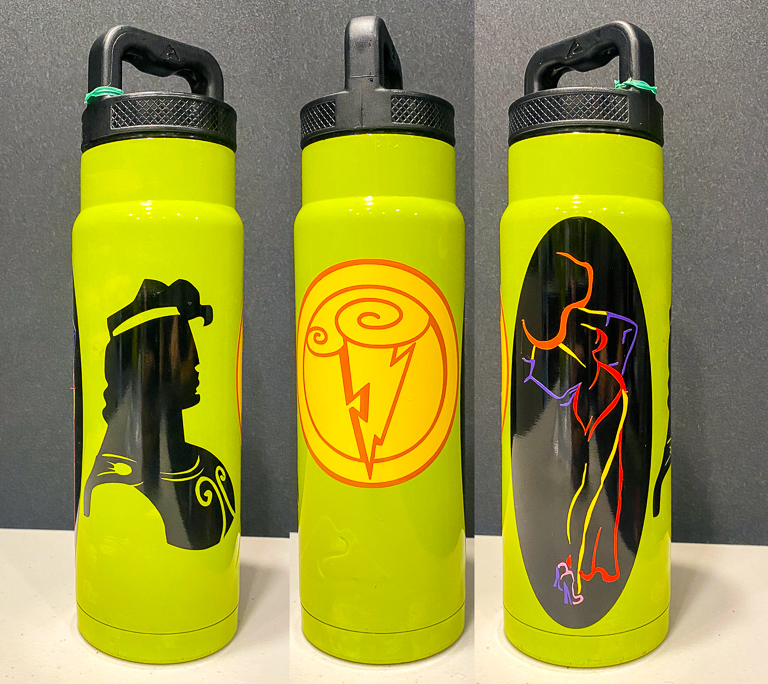 And finally, what character thinks it's not easy being green but loves being green anyway? Why Kermit the Frog, of course.
So while we're on the road, don't be surprised if you see a few of these different mugs show up in some pictures. 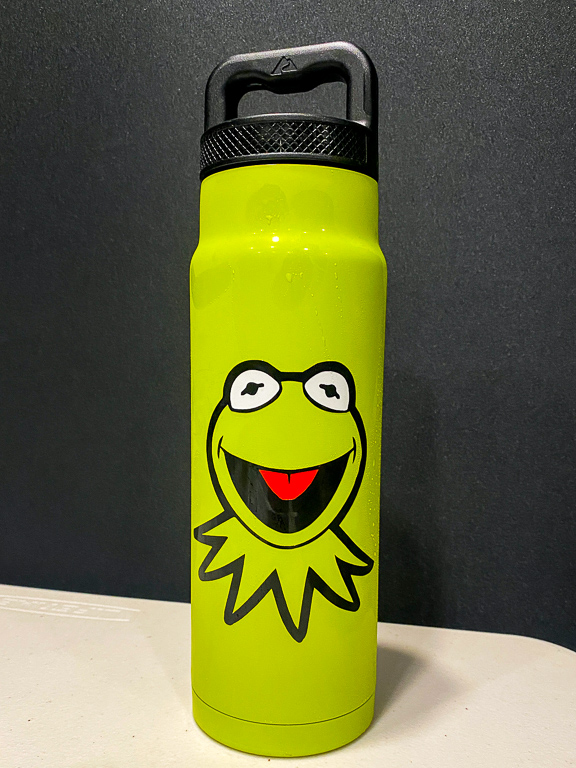