Pizza at Home - Pizza in the RV

It's been over a year of Pizza on Sundays, but the question is, now that we're in the RV can it continue? 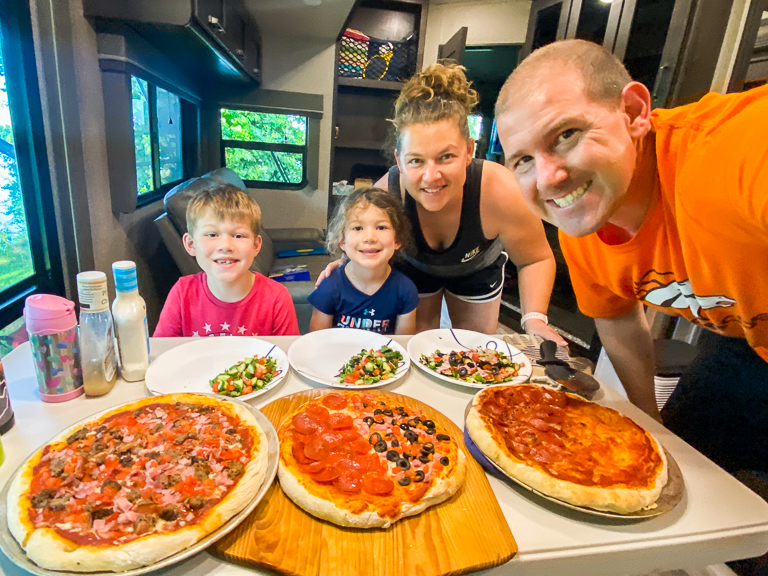 Everything is just a little closer together in here. That's all. 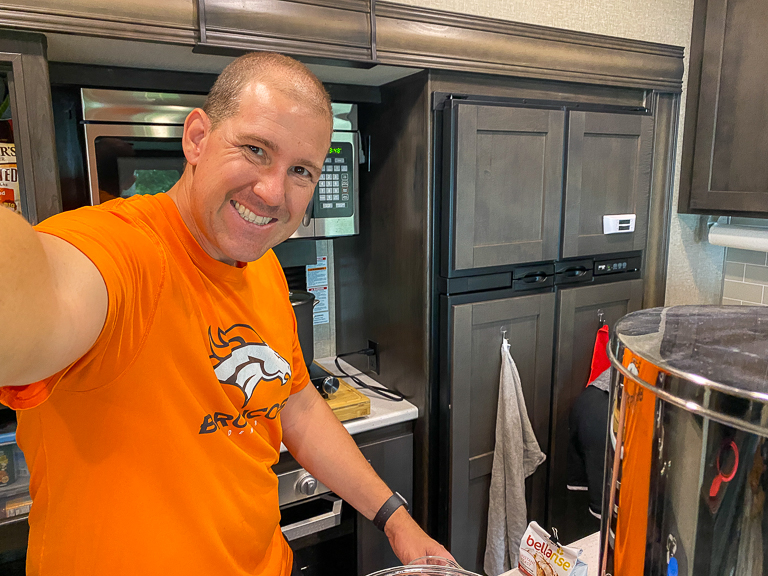 I was thinking ahead when I made up my recipe for a no-knead pizza crust. The KitchenAid Stand Mixer is too heavy to bring along, so any kneading I do for my breads going forward is going to have to be by hand. 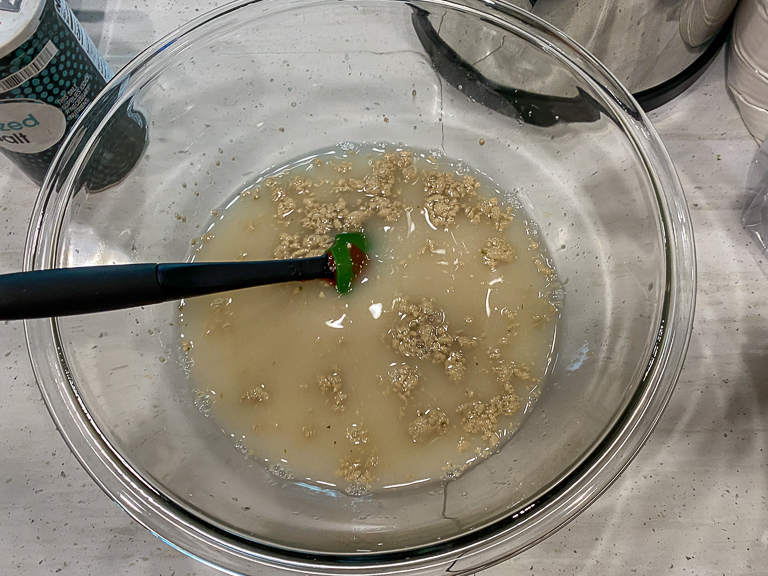 Just add all the ingredients to the bowl at the same time. 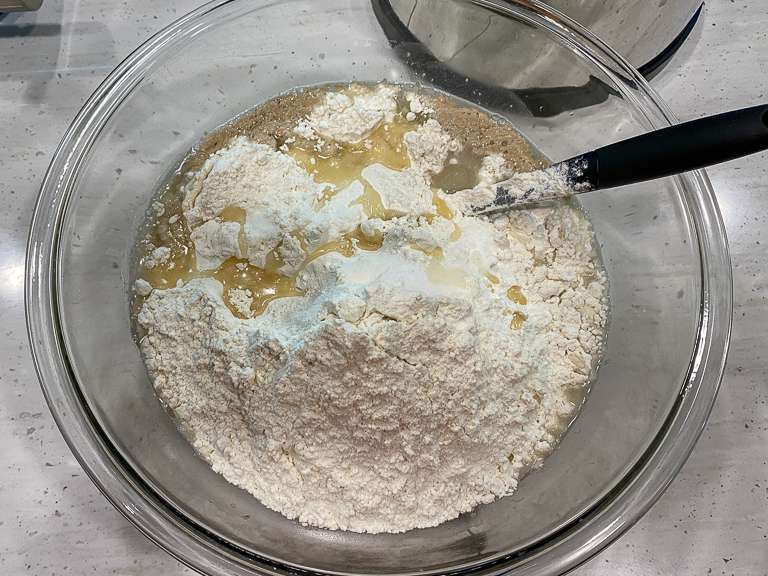 Give it a good stir to combine everything and you're all set! 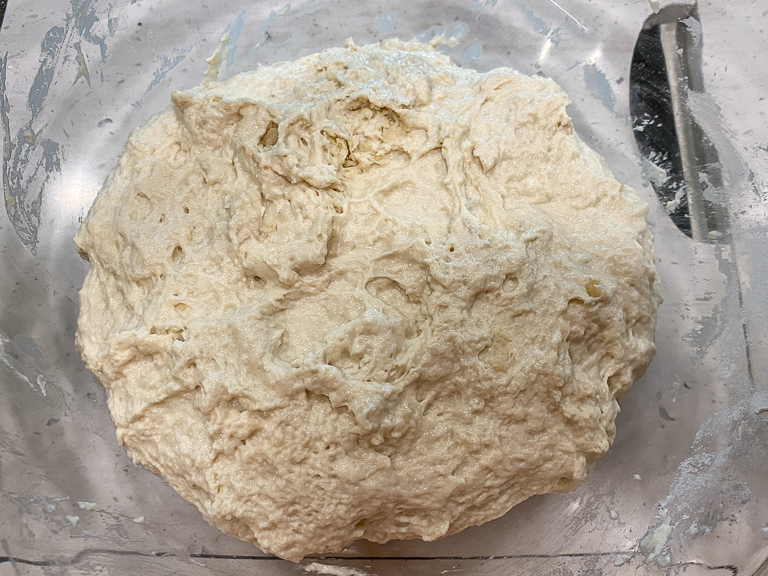 We're currently set up on the banks of the Arkansas River. What a beautiful view! 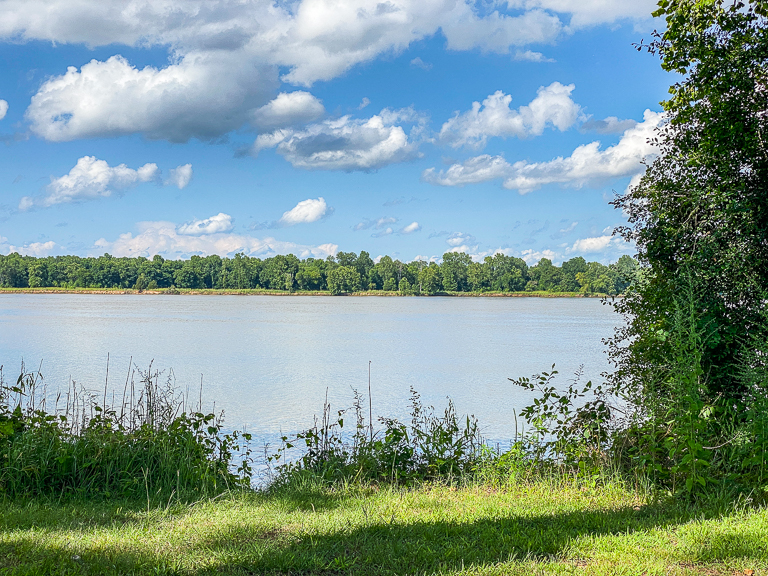 The pizza dough loves this hot humid environment too. I covered it with plastic wrap, set it outside, and it was very quick to double in size. 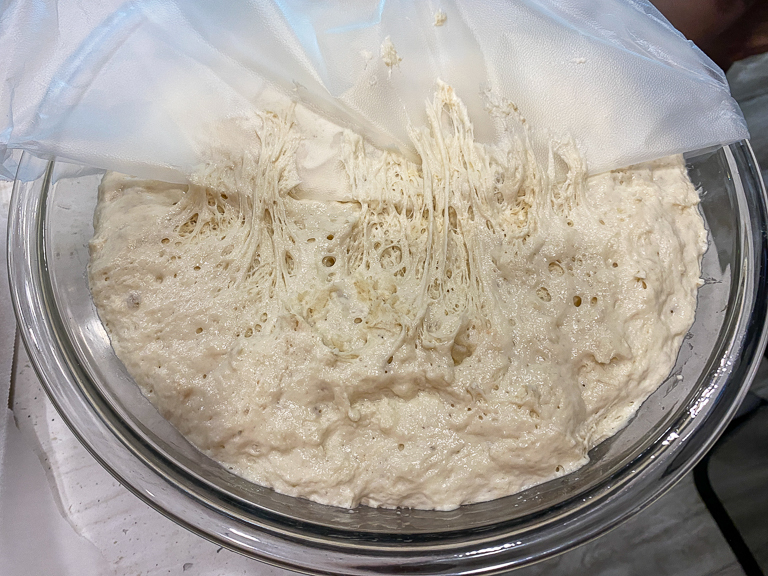 I might have left the KitchenAid, but the Pizza Peel still found its way onto the RV. I applied the perfect amount of homemade pizza sauce. 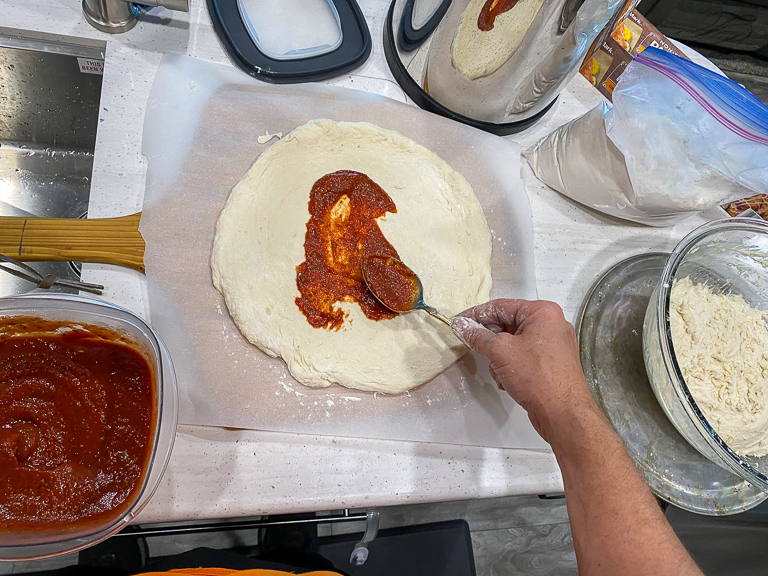 Being our first night having pizza in the RV, I had everyone pick their own toppings. Theresa is adding ham and olives to hers. 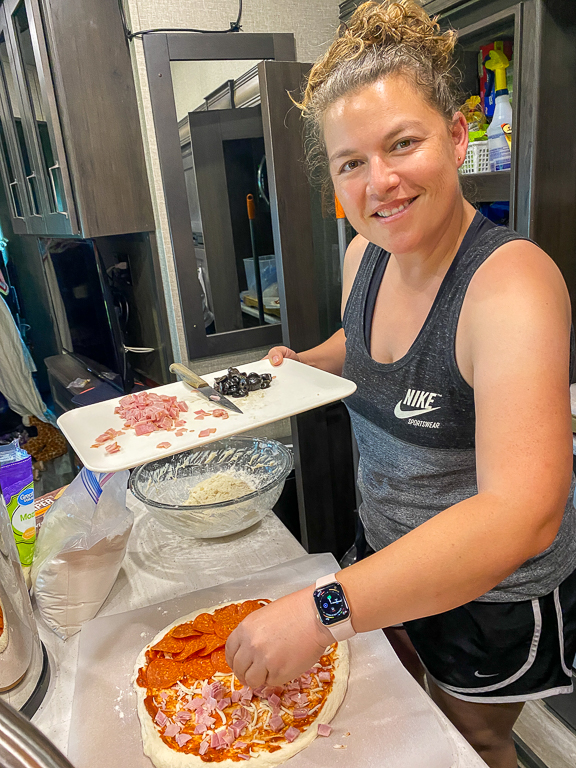 I also bought a special electric convection oven for the RV that gets up to 480F (almost the 500F that I like). It can make two pizzas at once, and the convection setting helps everything cook up a bit faster. 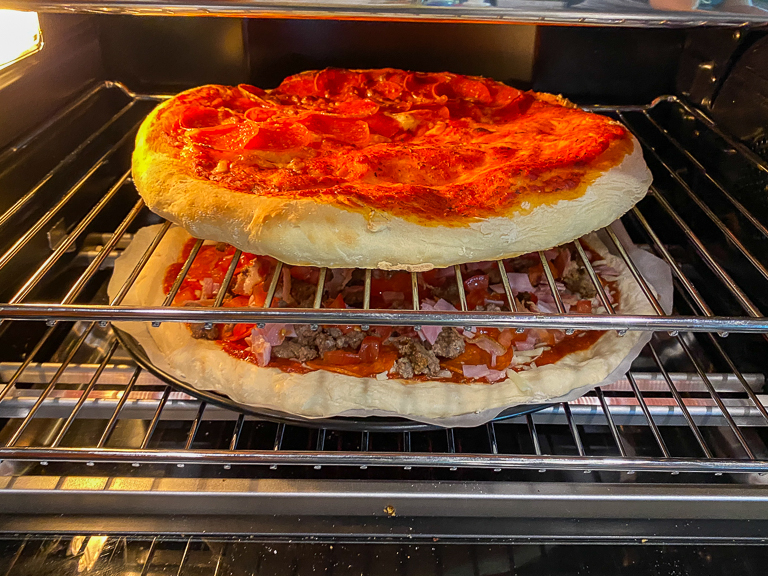 My pizza tonight is all the meats. There's hamburger, sausage, deli ham, cubed ham, pepperoni, and bacon, plus some diced tomatoes. I added a dash of Tabasco to it also because I like things spicy. For Ian and Alli, they'll split a pizza in half with pepperoni for Ian, and just sauce for Alli. 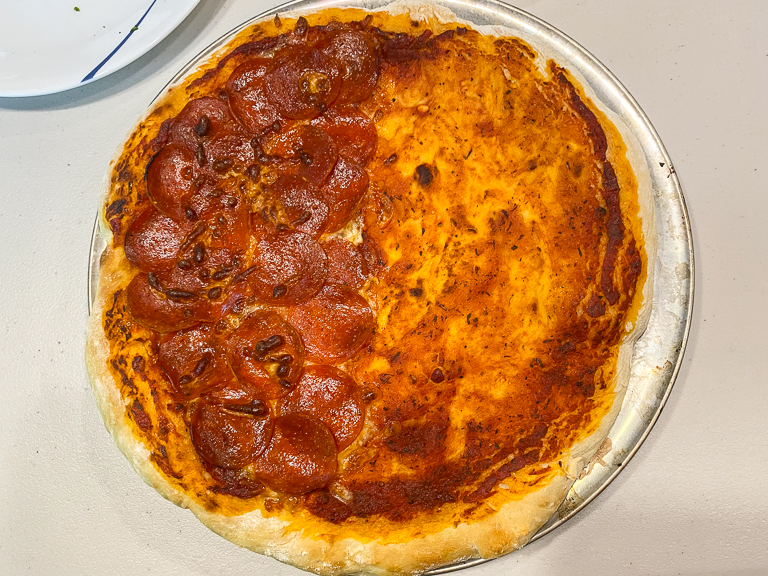 Because my recipe makes (2) 13" pizzas, but my toaster oven can't handle that size, I split the dough into 3 pizzas instead. I'll have to adjust my recipe to make only 2 pizzas going forward. For now, Ian will have some leftovers. 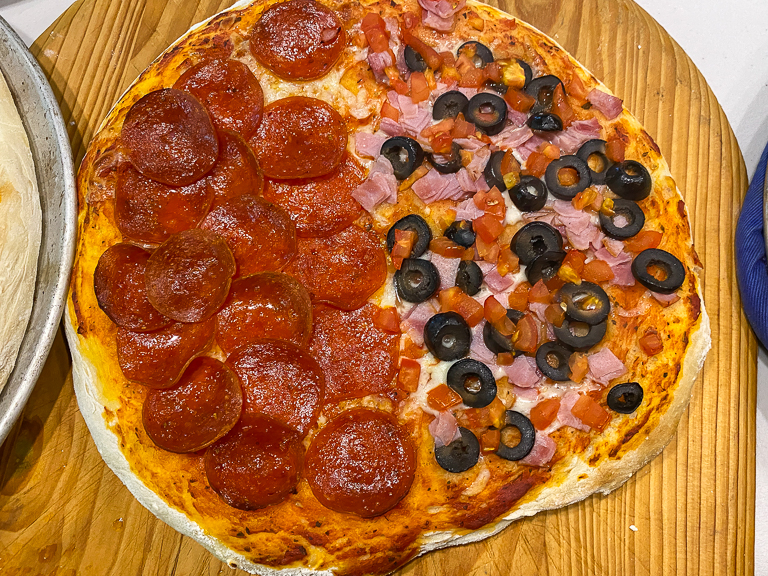 So pizza can definitely still happen in the RV. Now that we're on the road, I'll have to see what kind of interesting ideas I can come up with! Theresa has already given me a suggestion for next week that I'm sure will be pretty tasty. 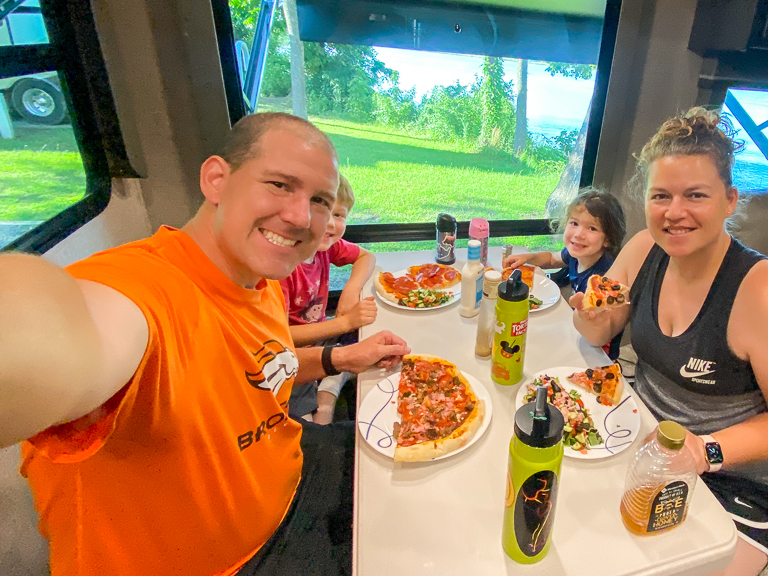