The Flowers Explore - Round Lake in Michigan

This one is from a couple weeks ago, but I don't want to forget about it.

All week Uncle Ty has been working on these Jet Skis, just in case we got a chance to use them. 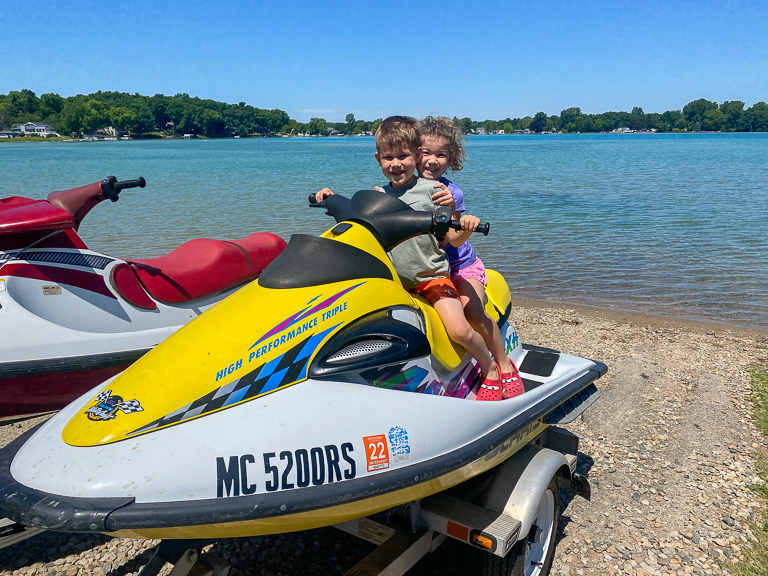 And where are we? Some tropical island in the Caribbean where the waters are turquoise blue? Surprisingly, we're in Michigan, at a place call Round Lake in the town of Horton. 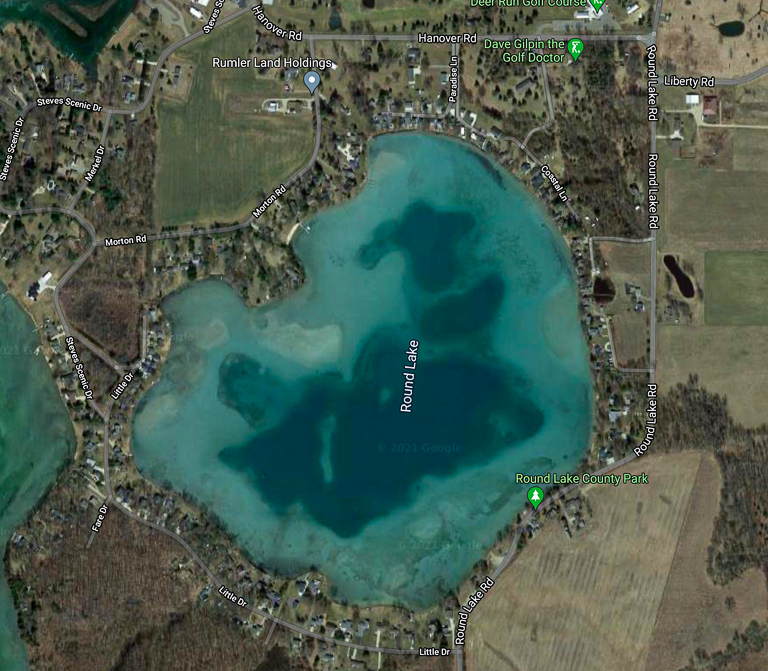 The sun is shining, the weather is warm, and it's a beautiful day to be out at the lake. Knowing that it would likely be nuts on the weekend, we chose a Thursday and were rewarded with a lake that had hardly anyone else around!

Many of the adults decided to hang out on the floating island that Rita picked up. 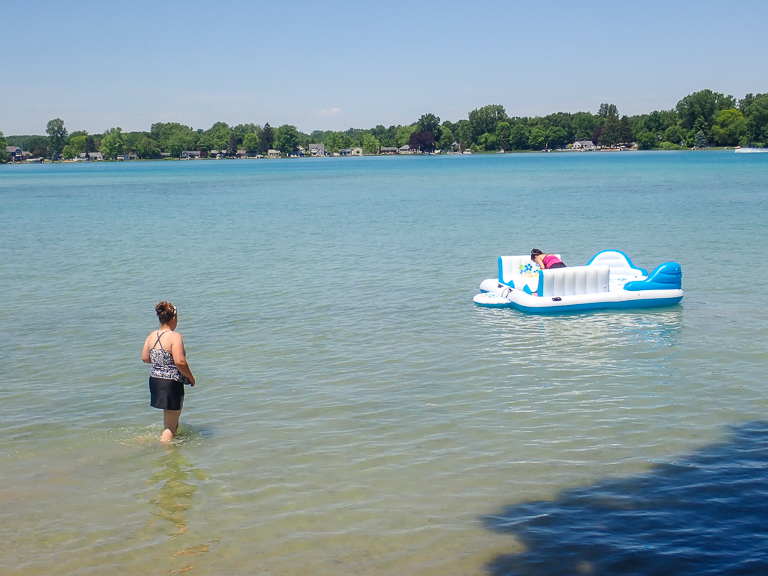 It seats 8 people and it's perfect for relaxing on the water. Just throw down an anchor so you don't float away. 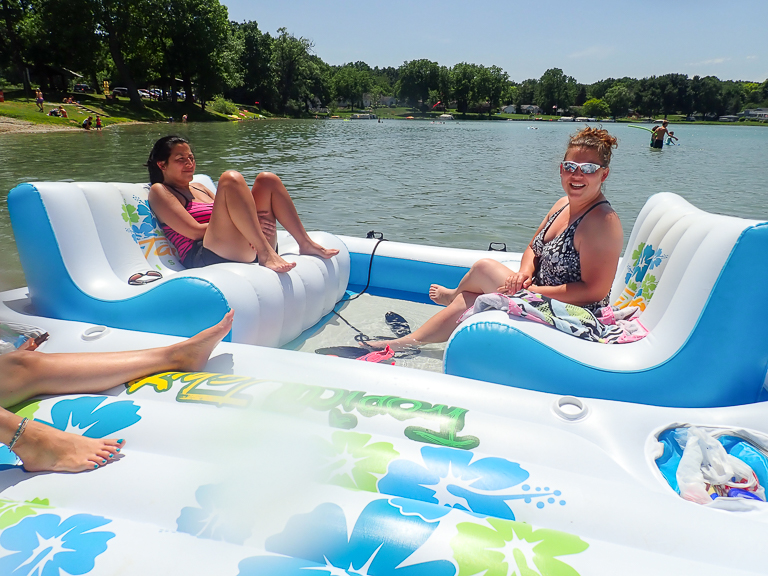 The kids though have been looking forward to riding on the jet skis. Ian has done this before when he was about 2.5 years old. I wonder if he remembers it. 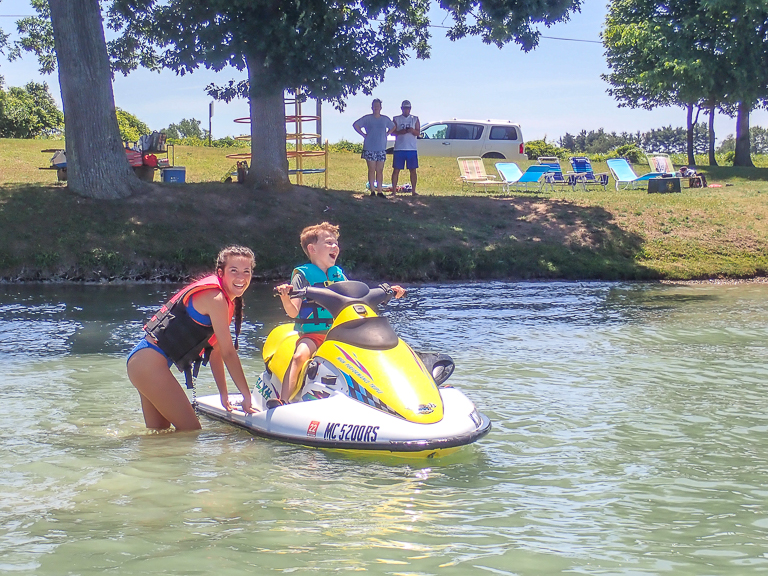 Alli was only 9 months old, and too little the first time around. She's ready this time! 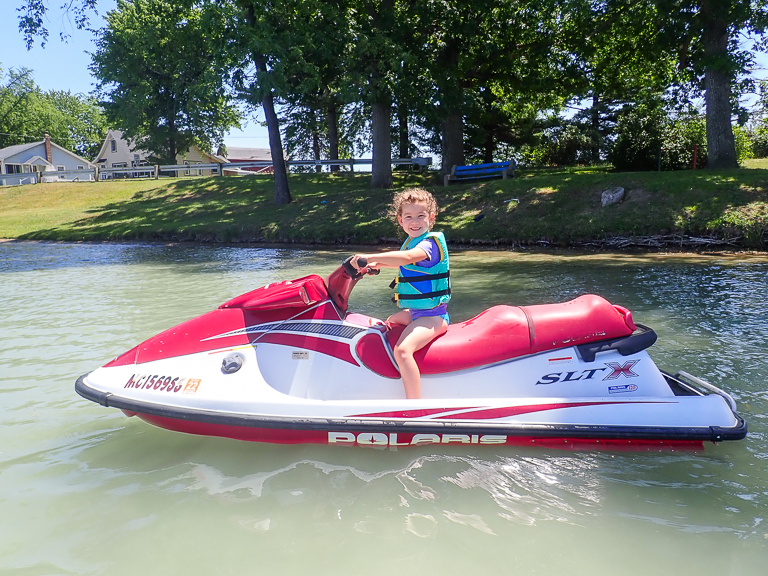 And boy did we go fast! The lake was very calm and there were no other boats to speak of. There's a speedometer on the jet ski that topped out around 49mph with her. Aubrey and Ian making some waves. Ian liked doing donuts in the water with the jet ski. 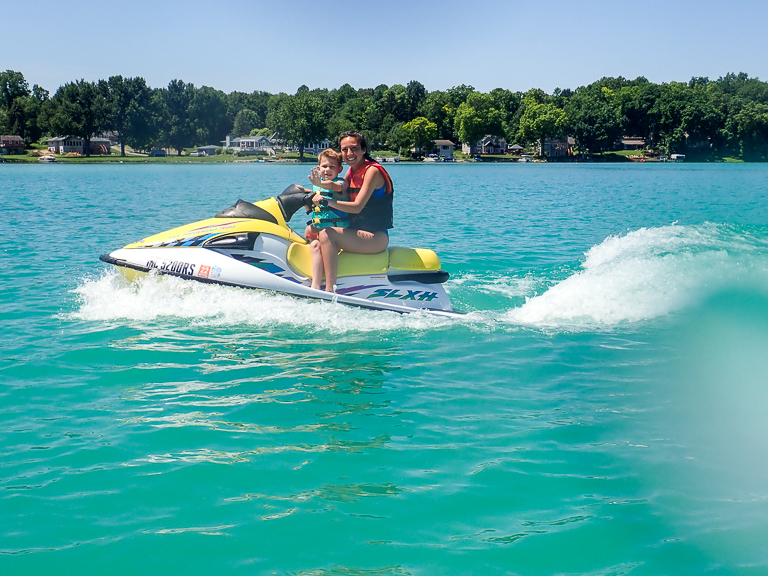 We traded off with different adults taking the kids out. 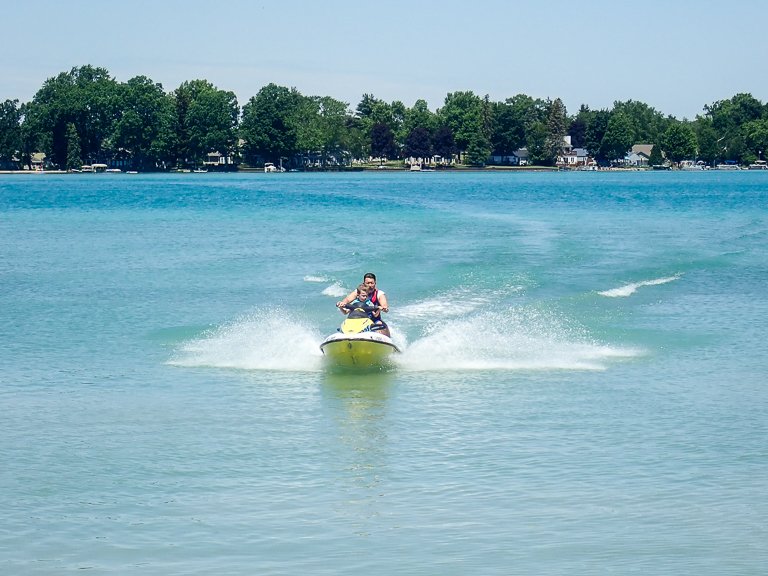 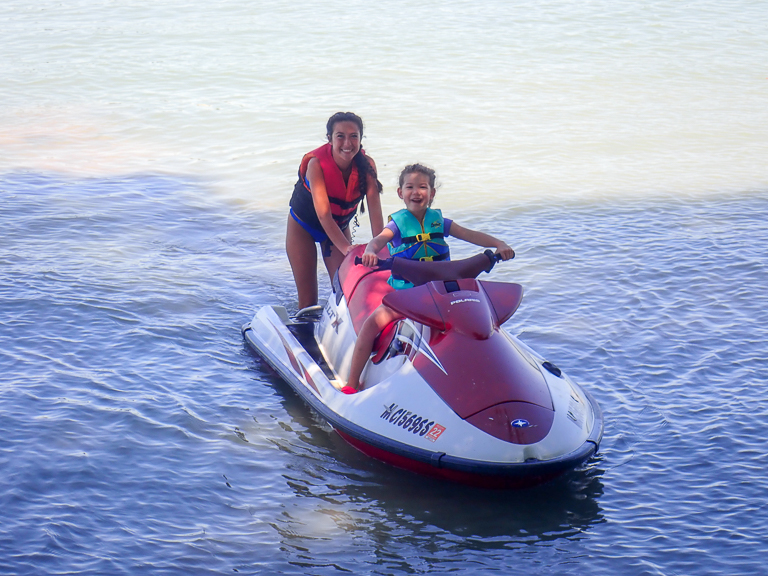 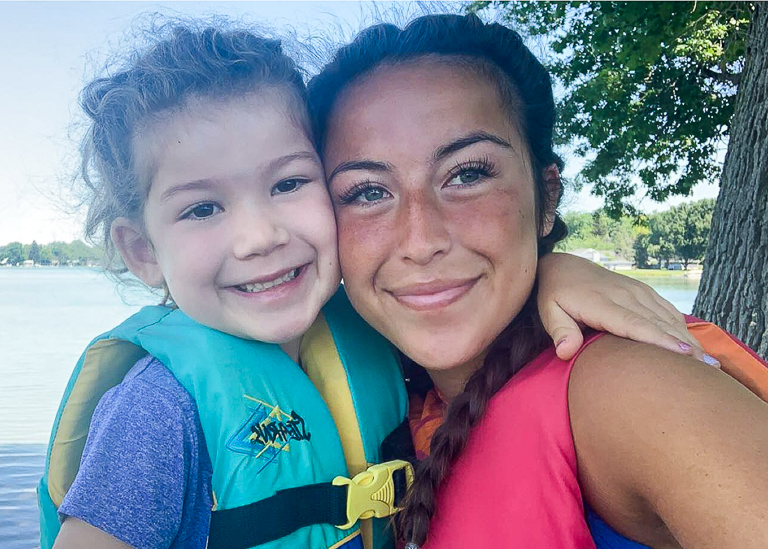 I had brought my waterproof camera along just in case we did something like this. I'm glad I had it! The kids were having a blast.
Time for lunch! 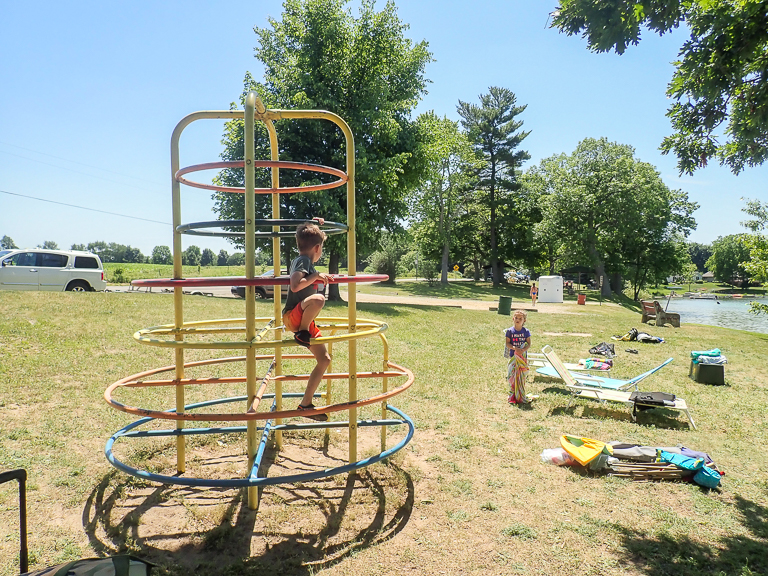 The kids came in to eat PB&J sandwiches. I know that some of the adults had food brought out to them on the water so they wouldn't even have to leave the floating island. 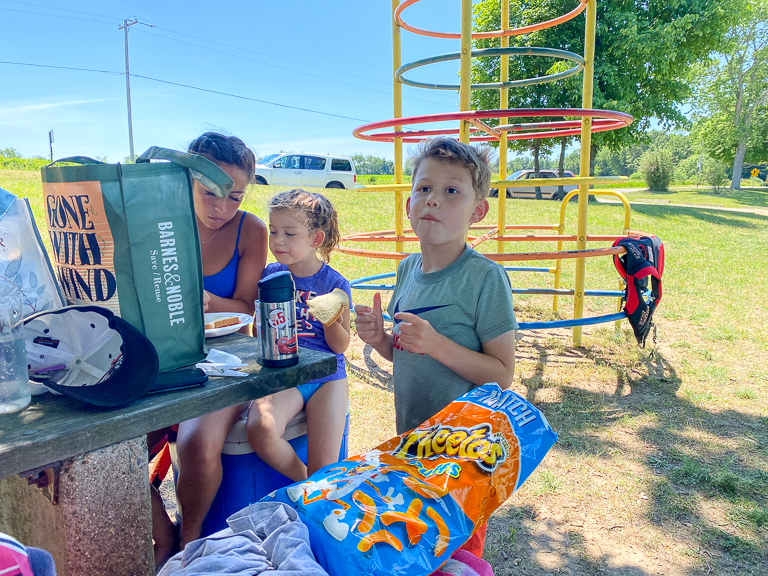 Ian - Can we take the jet skis out again?
Absolutely. With Ian, we were able to get it up to 51mph. Even being on the jet skis all day, not a single one of us fell in the water unintentionally. The lake had really great conditions for playing on today. 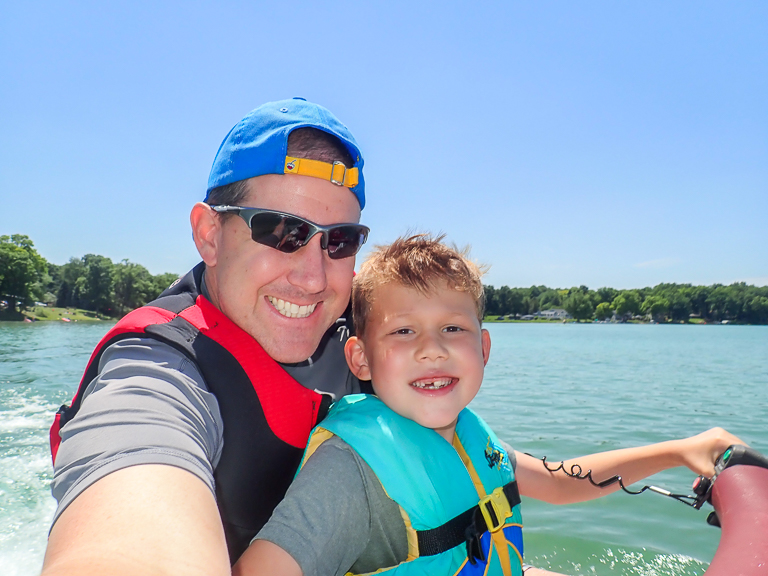 And I'm still surprised there's a lake that looks like this in the middle of Michigan.

After the jet skis, Ian wanted to go swimming, and convinced Alli to go along too. 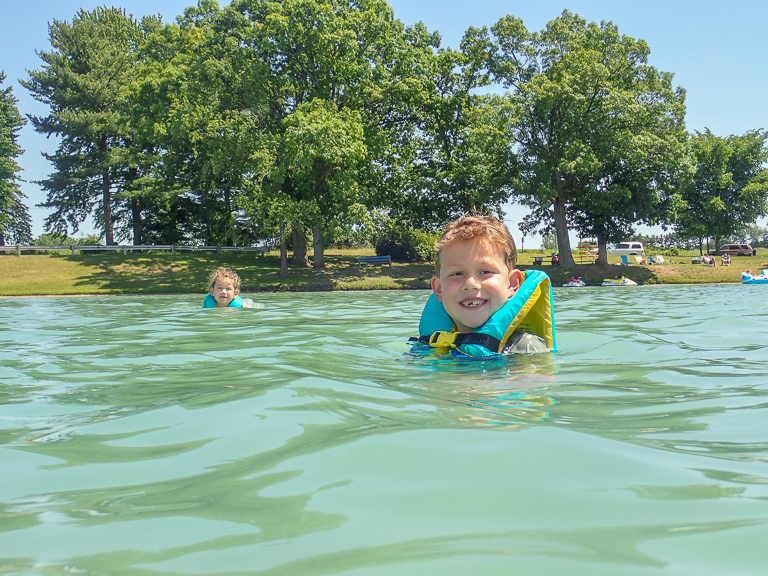 His destination is the middle of the lake. You can kindof tell from the satellite picture above that the lake is really shallow for a long ways out. I found that I could touch the bottom standing up a really really long ways from shore. Not that it was particularly pleasant to touch the bottom. This was not sand at all, but some mucky stuff that my foot would slip down into if I tried to stand up. 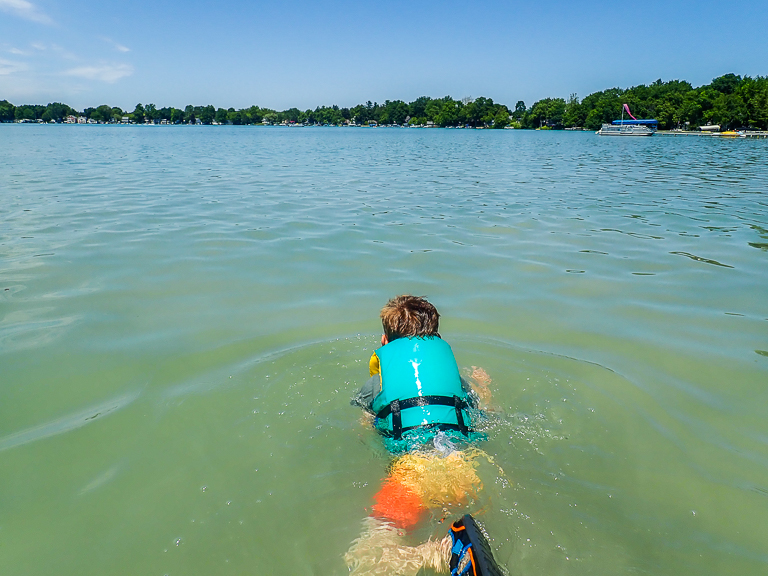 We're getting pretty far out Ian. Are we there yet?
Ian - Not quite yet! 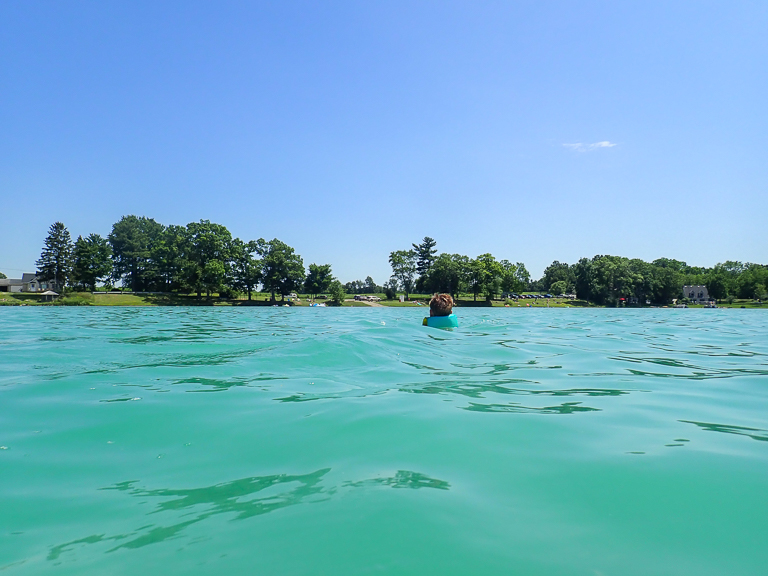 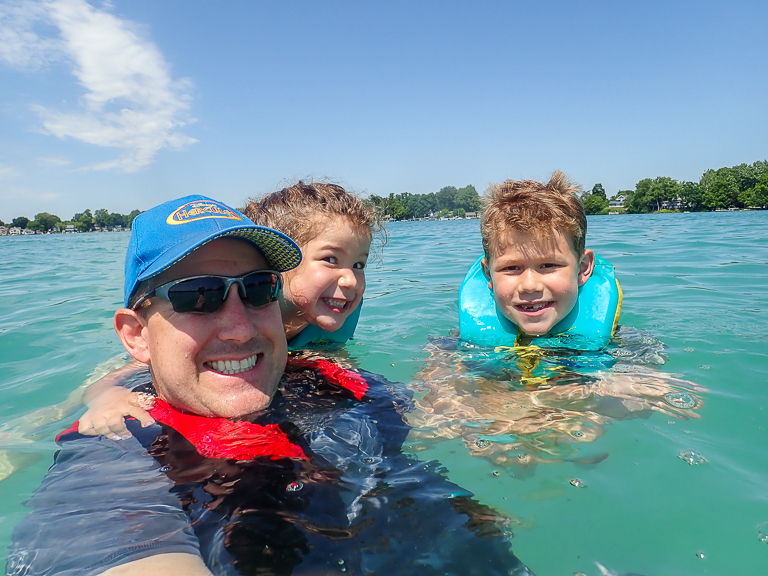 I can't touch my feet anymore, so we must be pretty far out. Ian, did we make it? 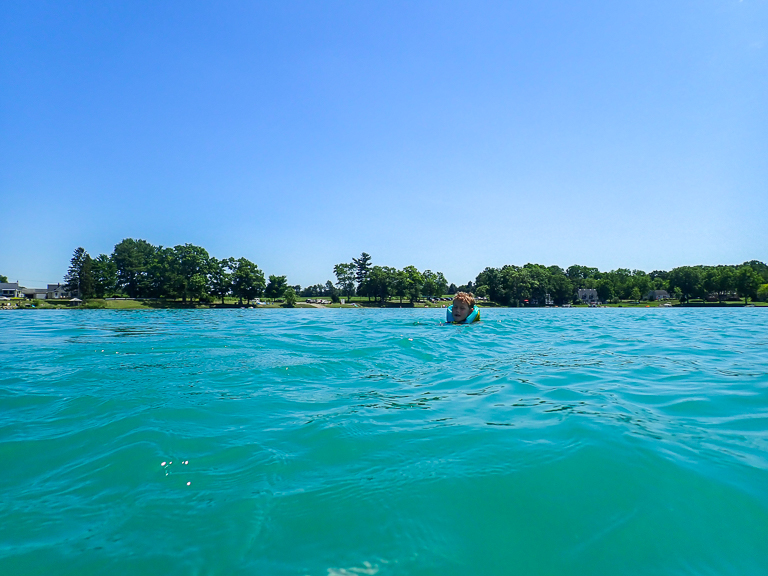 He agreed that we did!
My best guess is that we went about 1000 feet off the shore.
While we were out there, we noticed everyone getting packed up. The jet skis were coming out of the water and the floating island was being put away. 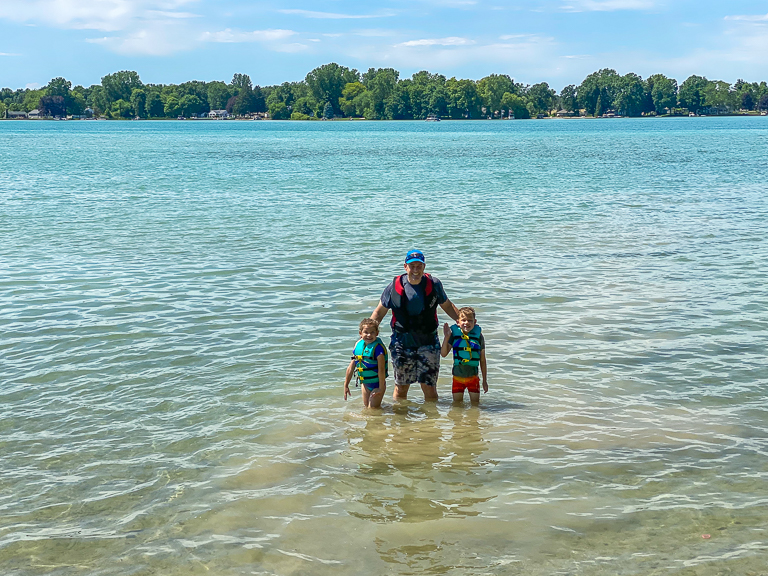 Thanks everyone for an awesome day on the lake! It was beautiful and we had a great time! 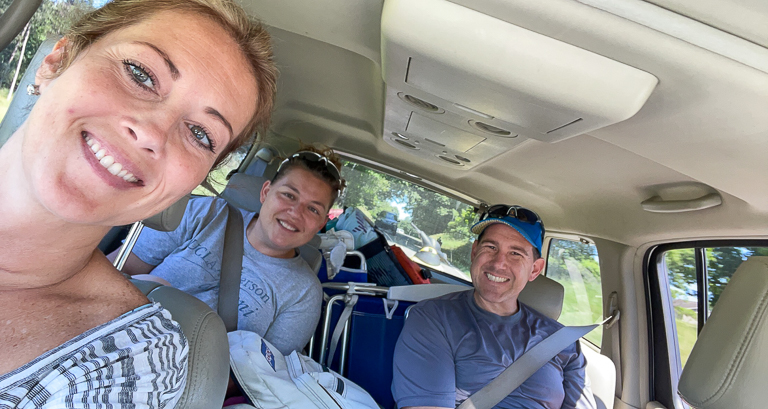