Happy 4th of July! I always like to try to theme my pizzas to special occasions. Today we're celebrating the birth of our nation and I wanted pizzas that would be "All-American".

I made hamburgers for lunch, and besides I've already made 2 different burger pizzas before.

You know what else I think about for a meal on July Fourth? Chili dogs and apple pie. I bet I could turn both of those into a decent pizza! 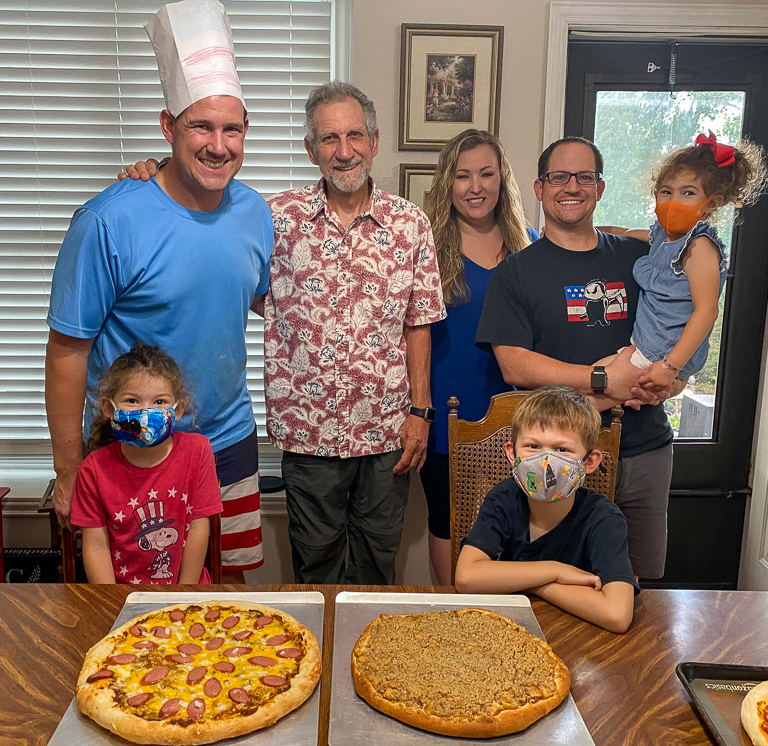 The Chili Dog pizza should come together pretty quickly, but the Apple Pie pizza will take a little more work. I'm making it from scratch, doing the apple pie filling myself! First I'll peel some apples and let them soak in lemon water until I'm ready for them. 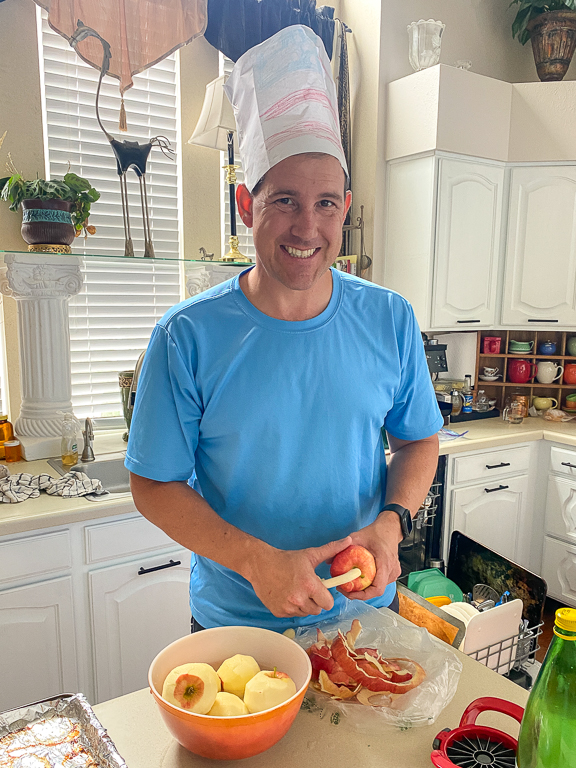 Then I diced them a little finer, added brown sugar, white sugar, butter, cinnamon, nutmeg, and flour, and put them over some heat. 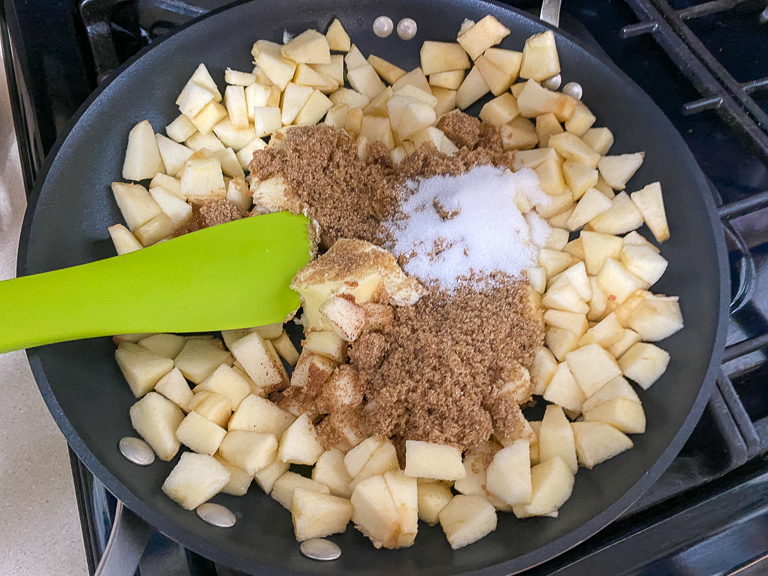 Thirty minutes later these apples have cooked down a little bit, and they are looking delicious! 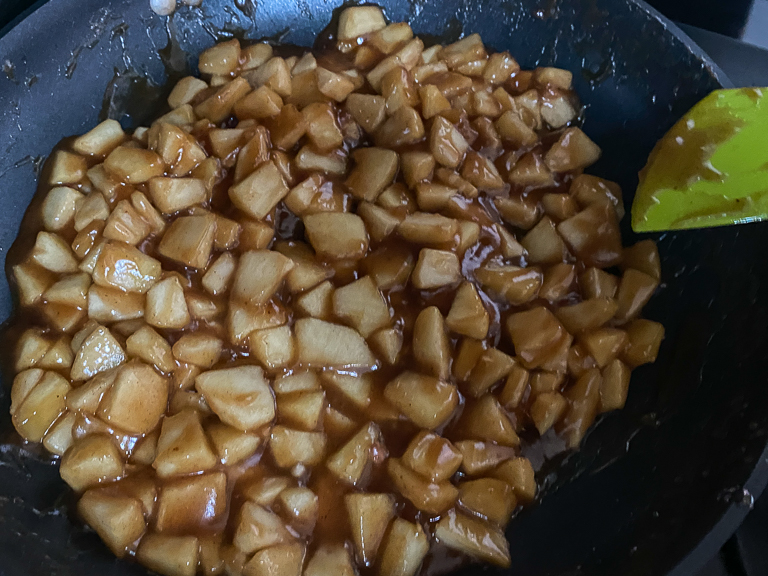 For my sweet pizza, instead of using my regular pizza dough recipe, I'm going to be using the same dough I would use for my cinnamon rolls. 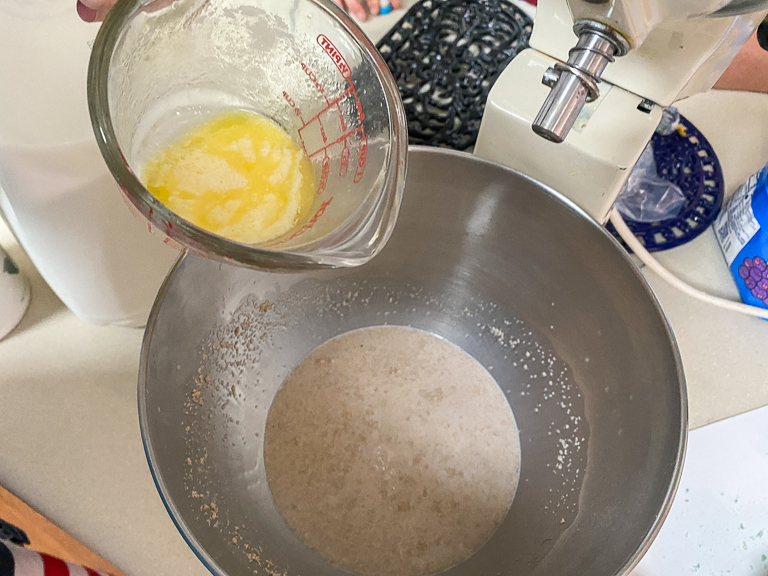 And since I'm making that dough, why not go ahead and make a cinnamon roll pizza too. The filling is super easy. Just cinnamon, brown sugar, and butter. 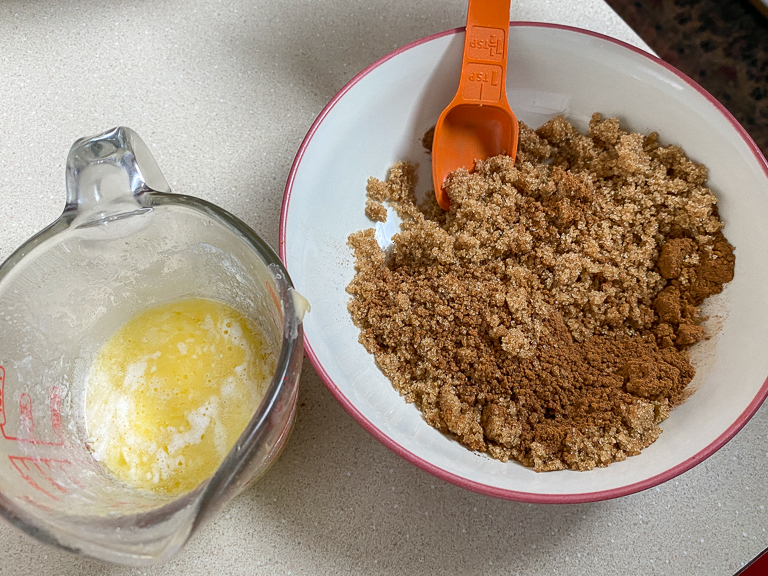 It spreads on a bit of dough I've flattened out in the front, and I rolled another batch of dough super thin for all my cinnamon roll disks to sit on. 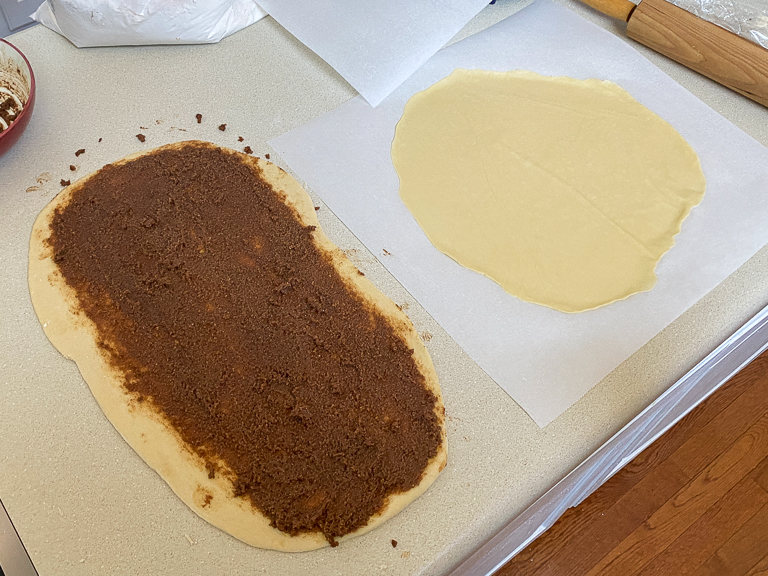 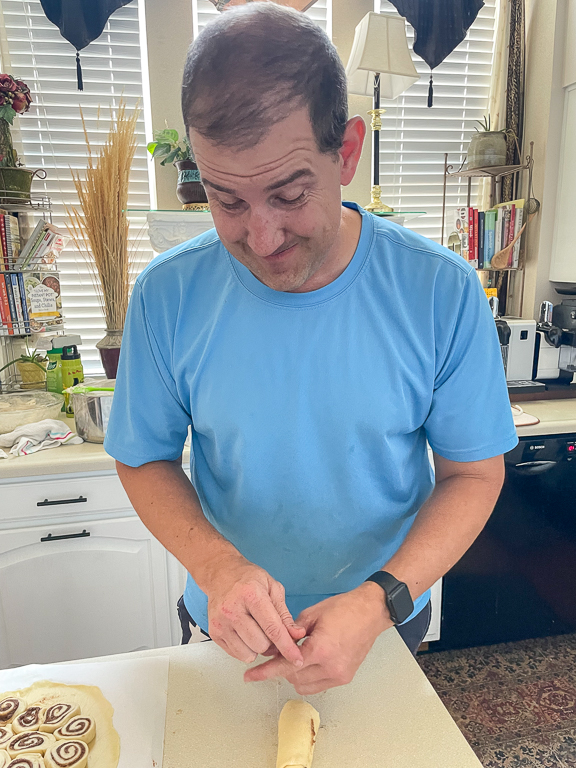 Looking good! These will go sit on the counter to rise while all my other pizzas bake. 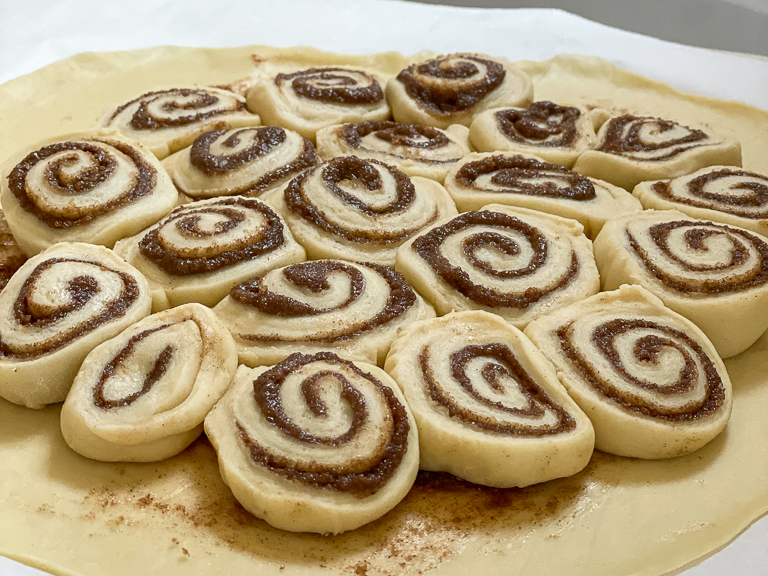 Like I said, I'm using the cinnamon roll dough for that pizza as well as for my apple pie pizza. My regular dough is a lot more sticky than this dough, so it was pretty easy to pull and stretch to the right shape. 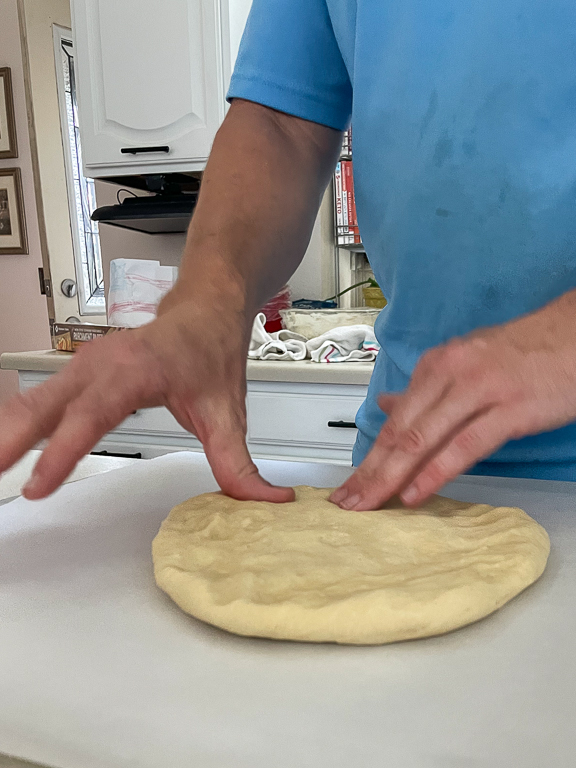 I've got the dough and my apple pie filling that I made a little earlier. There's just one more thing that's missing. 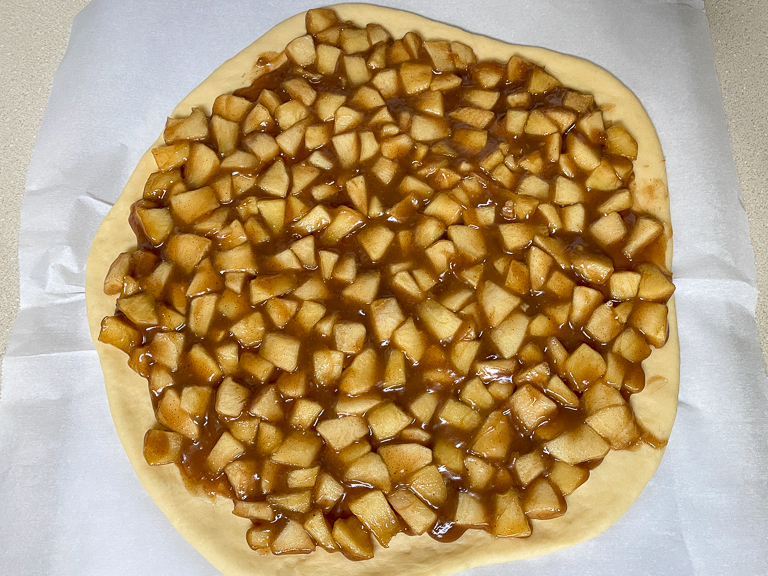 A really good apple pie for me has to have some kind of topping on it. This one is made with butter, brown sugar, and flour. I'm hoping it bakes up beautifully. 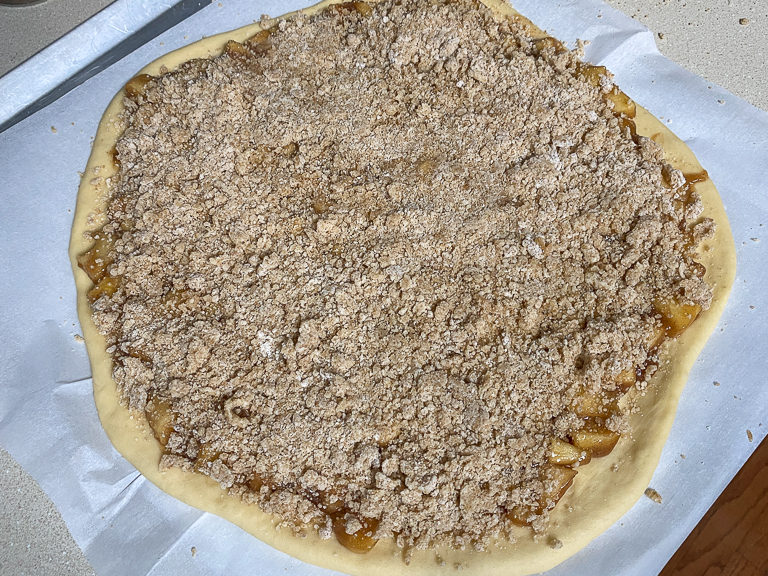 For my Chili Dog pizza, instead of tomato sauce, I'm using a can of Hot Dog Chili Sauce. 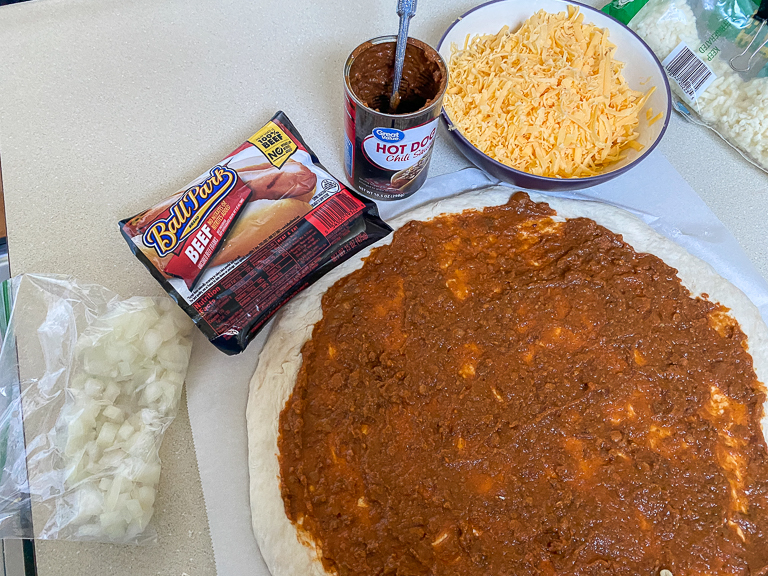 Then it gets topped with a bunch of cheddar cheese, sliced hot dogs, and onions. No relish on this pizza please. 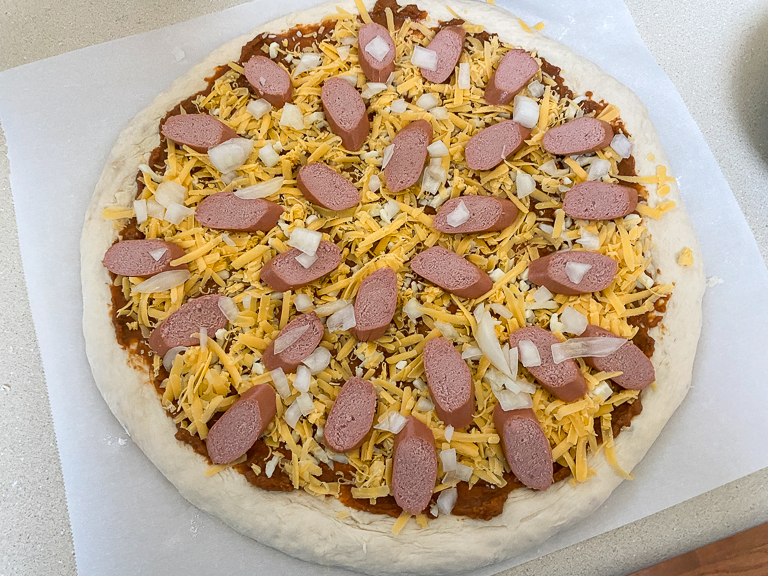 These all American pizzas are ready to go into a 500F oven for about 12 minutes! 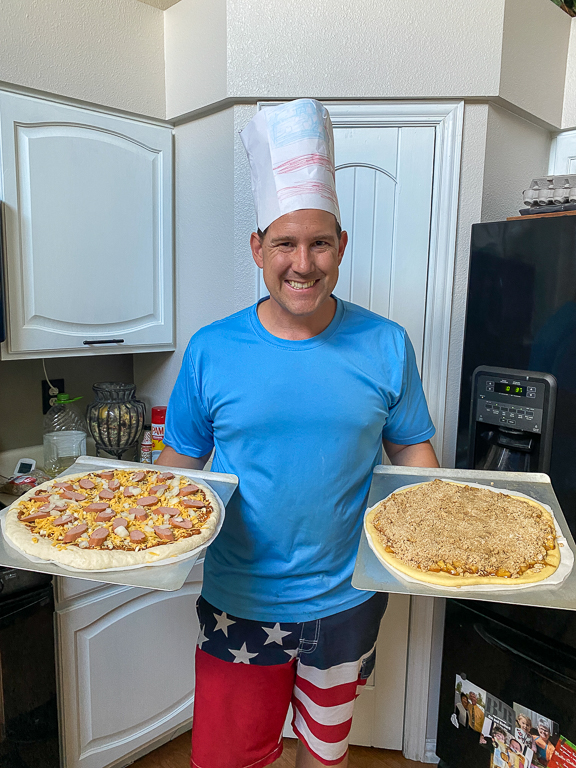 My dough recipe makes a super fluffy crust, almost like a fresh bread. This looks great! Honestly with all the weird pizzas I've been doing, I wasn't sure how well this would be received. But most everyone in the house said how much they were looking forward to trying it tonight. 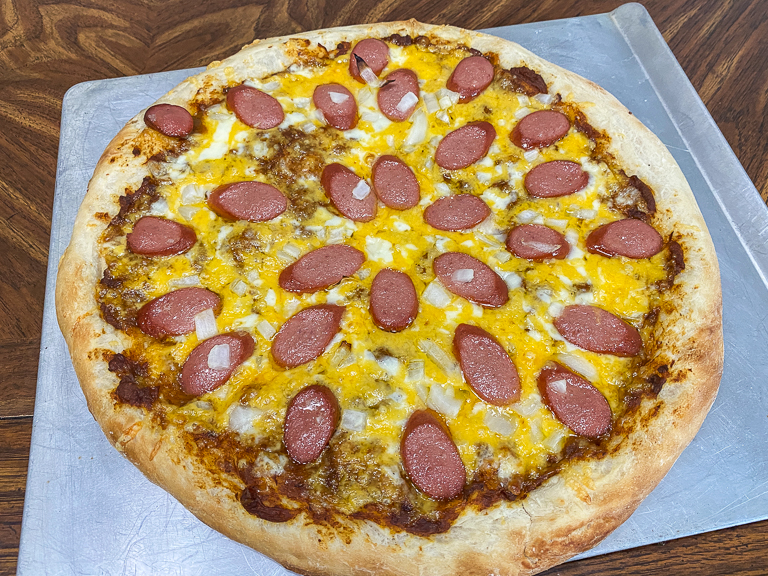 And if the Chili Dog pizza looks great, this apple pie pizza looks amazing! Look at that beautifully browned crust and super crunchy topping! This is going to be good. 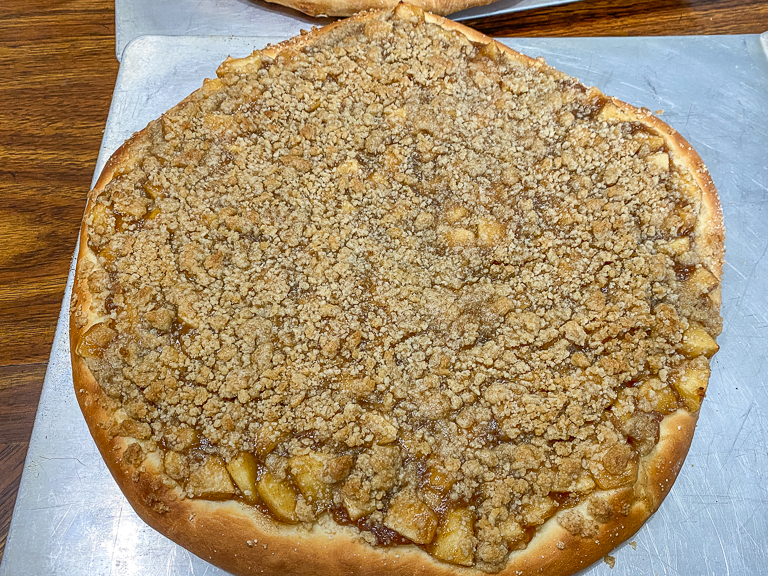 My cinnamon roll pizza needs a cream cheese drizzle on top. I bet that would be good on the apple pie pizza too!
Not wanting to get the big KitchenAid mixer out for such a little task, Theresa decided to go old-school and grabbed the manual beaters. Not as easy as it looks, as the powdered sugar on the counter-top and my hand can attest. 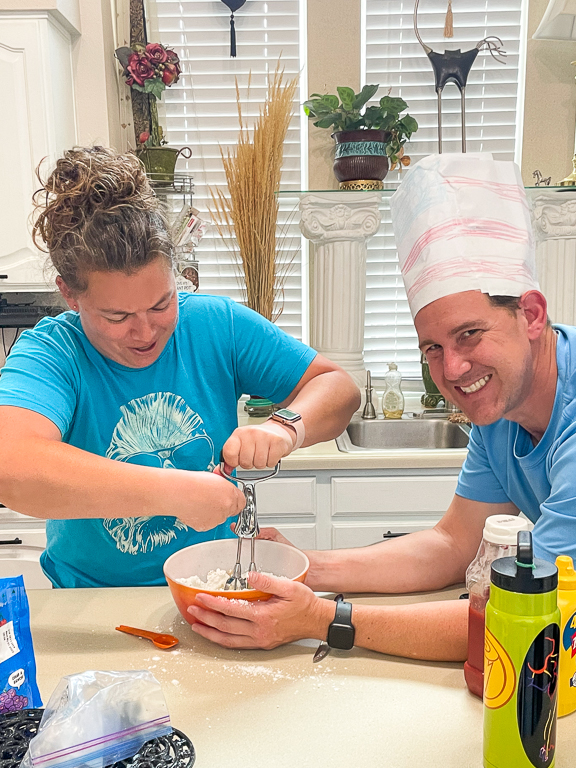 Gram coming over to show us how to do it right. 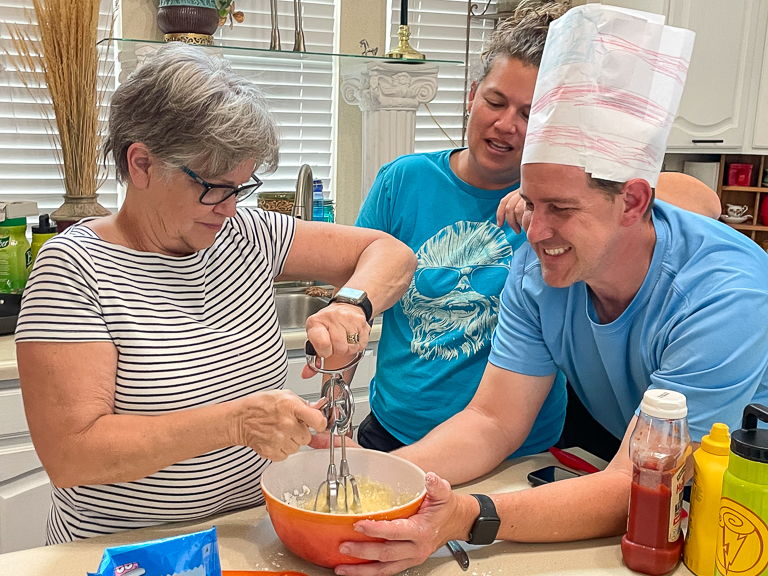 These are smelling delicious! Let's eat! 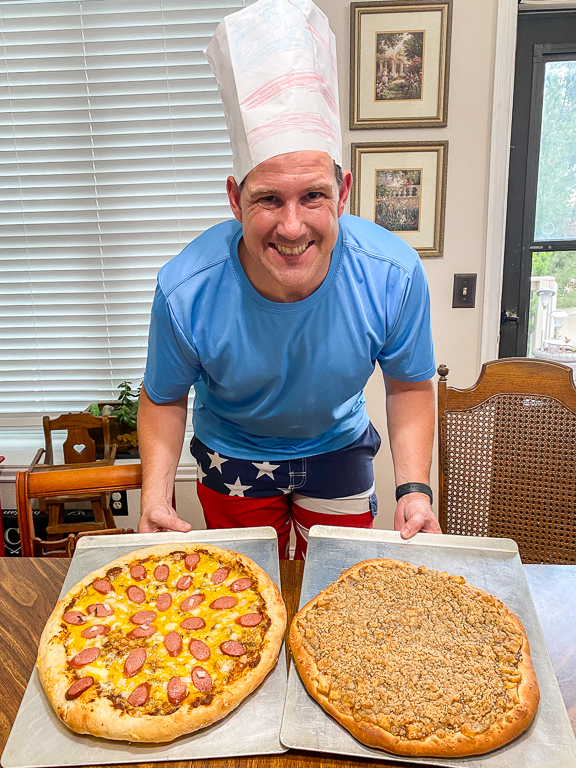 While everyone else was digging in to those pizzas (plus the two other normal pizzas I made), I got started on the cinnamon roll pizza. These have risen beautifully, and the trick to getting ooey-gooey cinnamon rolls is to spoon some warmed heavy cream over them right before they go into the oven. 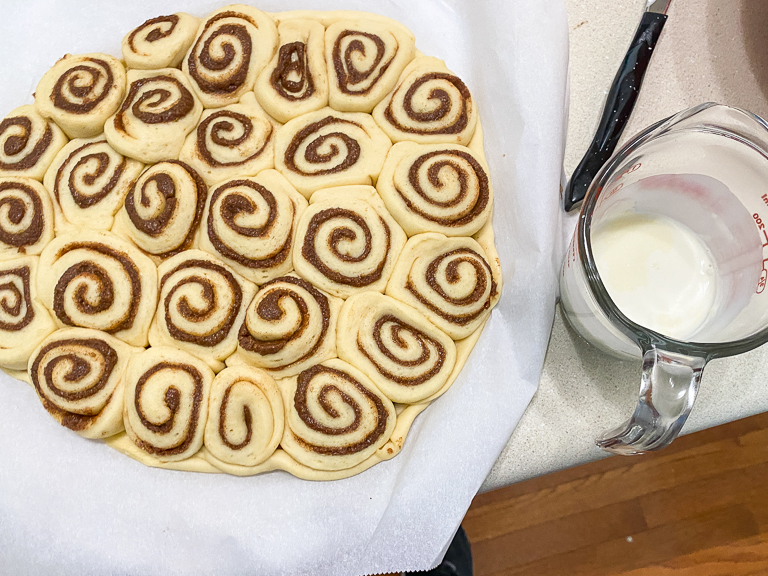 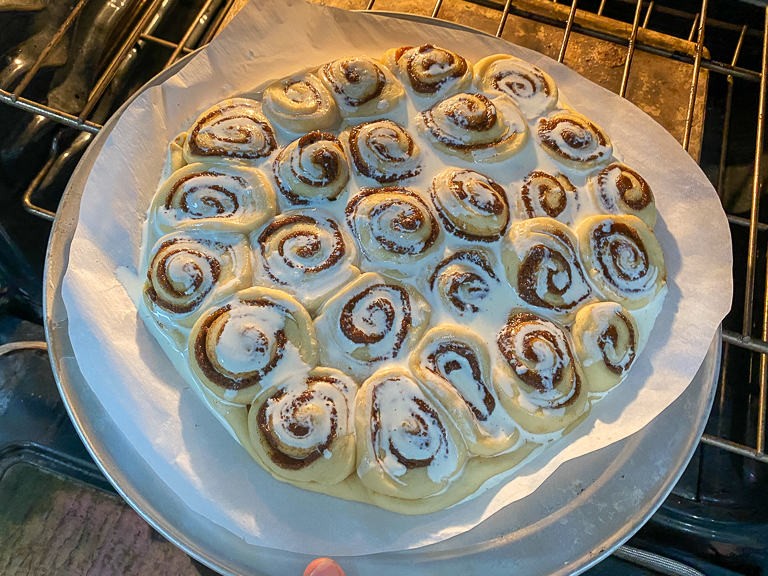 While those are cooking, it's time to eat. Here's my first plate tonight.
The Chili Dog pizza was exactly what I was expecting and every bit as good as I was hoping. The crust takes the place of a bun very nicely and we know all the other ingredients that go into a chili dog work well together.
Some people added mustard or ketchup to their pizza. It was really good! 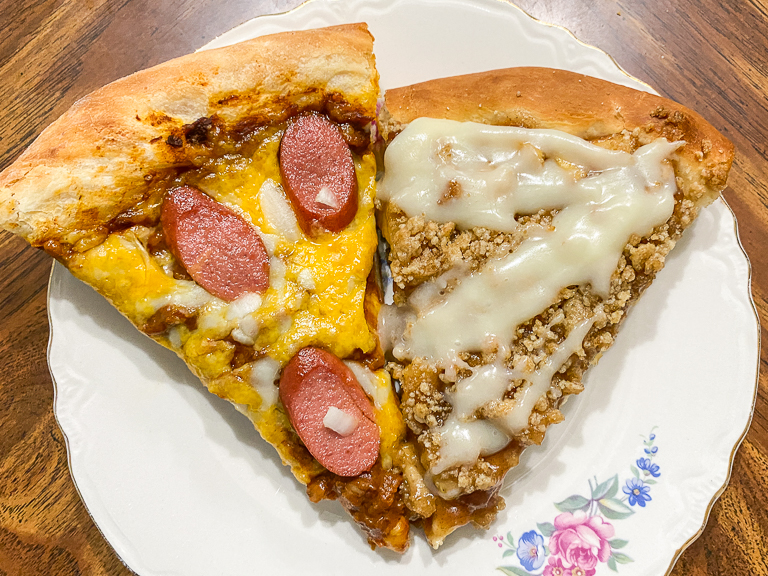 The apple pie pizza was also really good!
My mother remembers going out regularly to a pizza buffet at a place called Pizza Inn, and they had apple pie pizza. She said it was nowhere as good as this one.
Delicious apples with some texture still left after all that heating and baking. Cinnamon and brown sugar flavors as well. Megan said it was her favorite dessert pie.
The one complaint I did hear was that it was too sweet. Well to each their own. 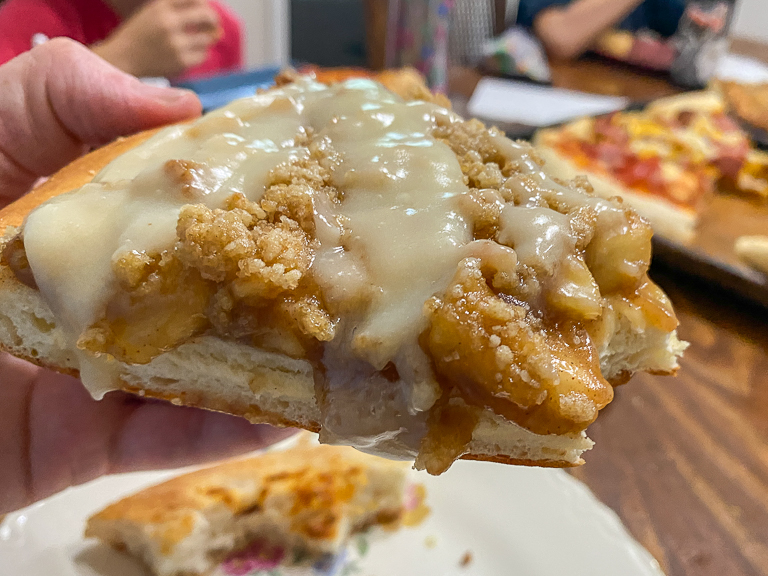 During all this time, there are delicious smells coming out of the oven. The cinnamon roll pizza must almost be finished. 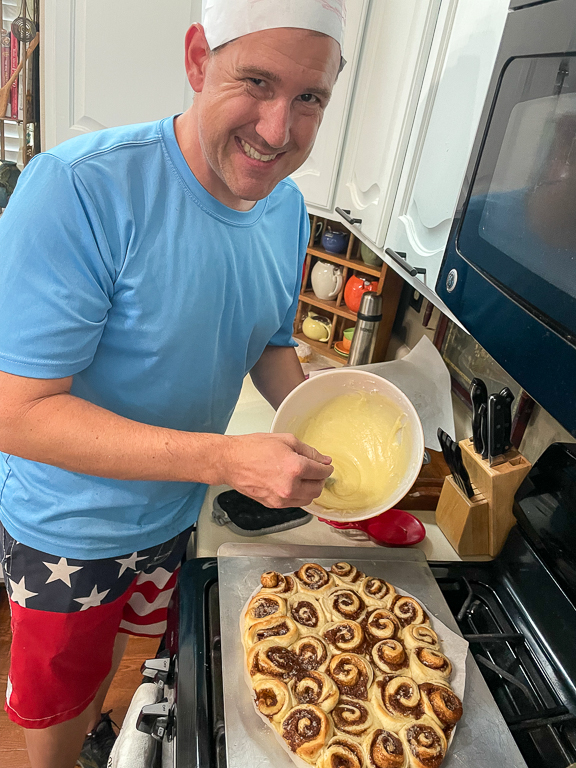 Properly covered with frosting. After having all those other pizzas, I wasn't sure how popular this would be, but when this came out of the oven, everyone came over to see it. 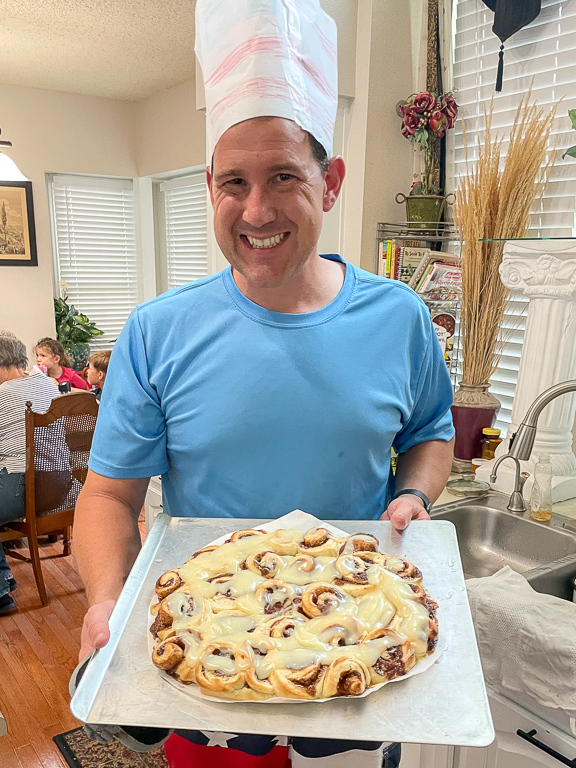 Alli couldn't wait for a fork. 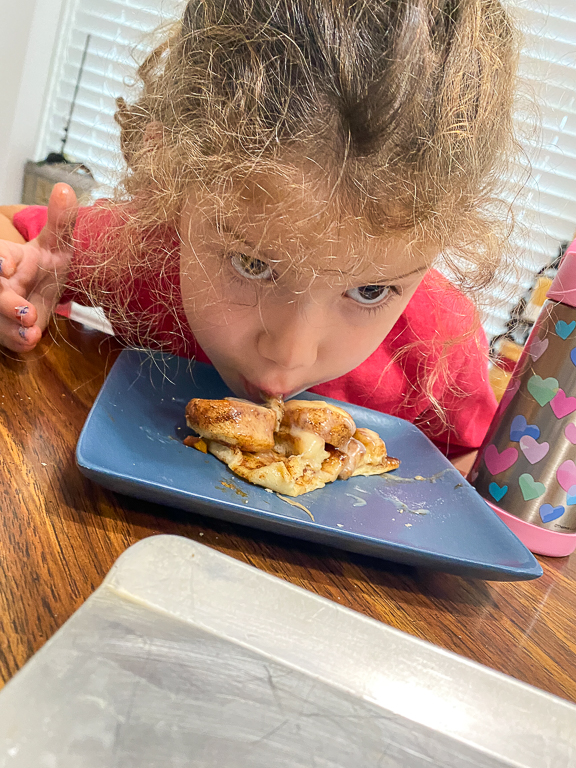 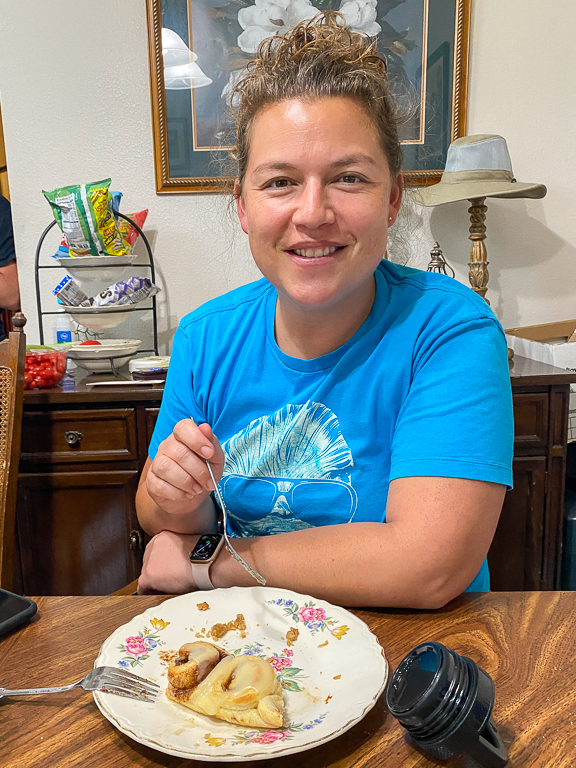 I think I know what I've having for breakfast tomorrow!
So that's pizza for today! A Chili Dog pizza, an Apple Pie Pizza, a Cinnamon Roll Pizza, plus two regular pizzas. It's been a busy day in the kitchen, but the results have been tasty and worth it! 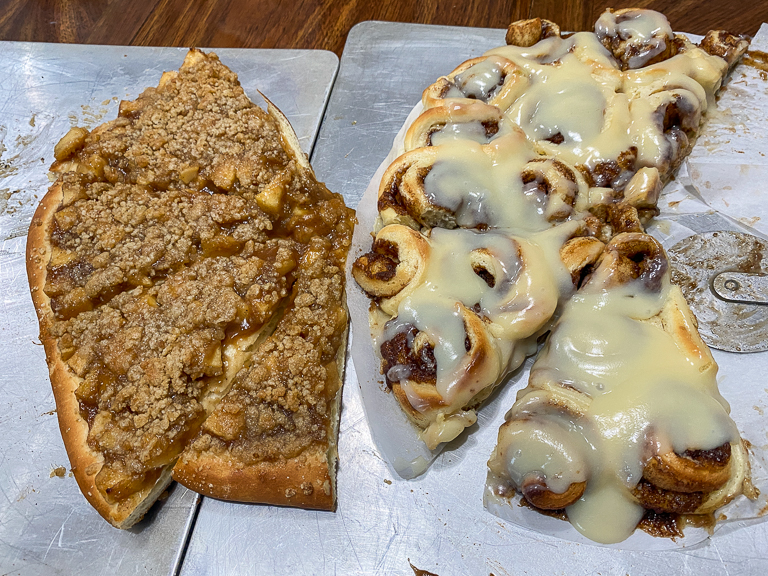