I love it when Lay's comes up with something new! And here I thought that the Summertime Lays taste test we did a couple months ago would be it for the summer. But Lay's is doing a Flavor Swap with some very popular chips and I'm really excited to try something familiar but new! Lay's is swapping the flavor with Doritos Cool Ranch, Cheetos, and Funyuns! 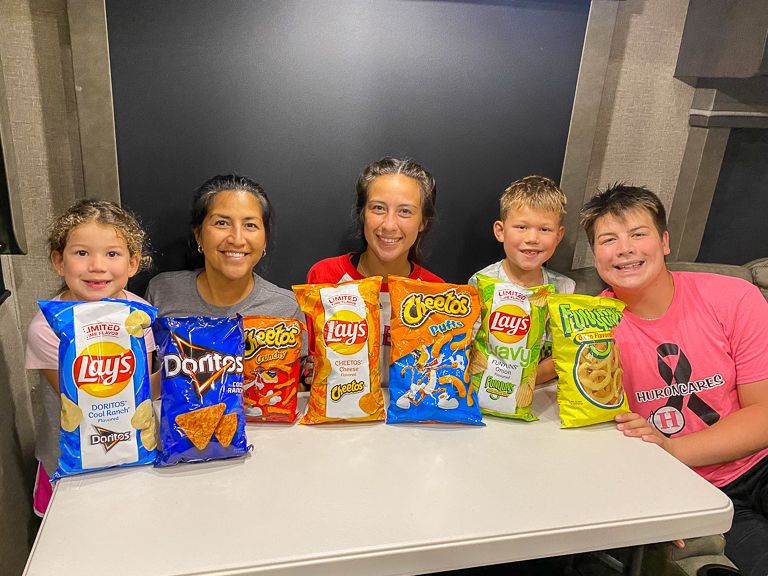 While walking through a Walmart, I saw these two Flavor-Swap varieties sitting on the shelf. Lays is swapping flavors with Funyuns and Cool Ranch Doritos! This is going to be great! But are these the only flavors? No! Looking online it shows that there's a third Flavor-Swap with Cheetos as well! 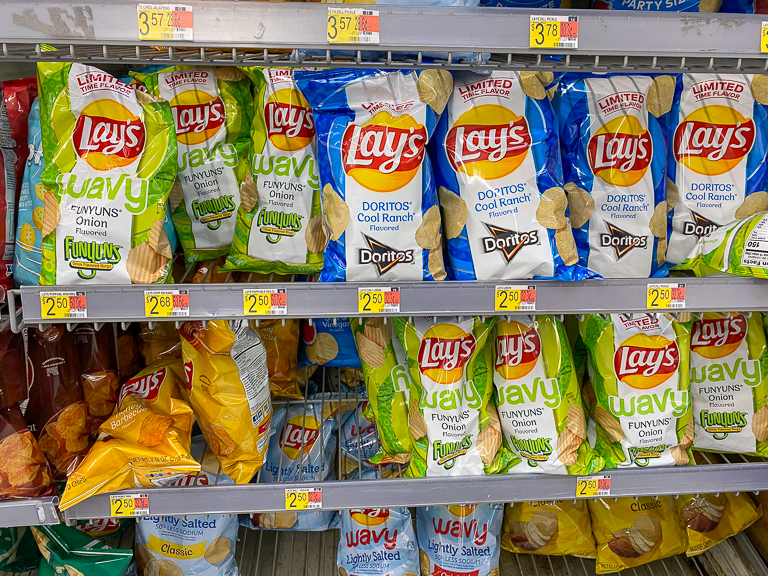 But those Cheetos flavored Lays were very elusive. None of the local Walmarts, Targets, or any other sites showing stock online nearby didn't show availability.
Theresa made it a mission to find them though. She happened to find them at a store 2 hours away in the Outer Banks of North Carolina. Good thing we're going there anyway. There were 7 different Food Lions along the Outer Banks, but only 1 showed any in stock. 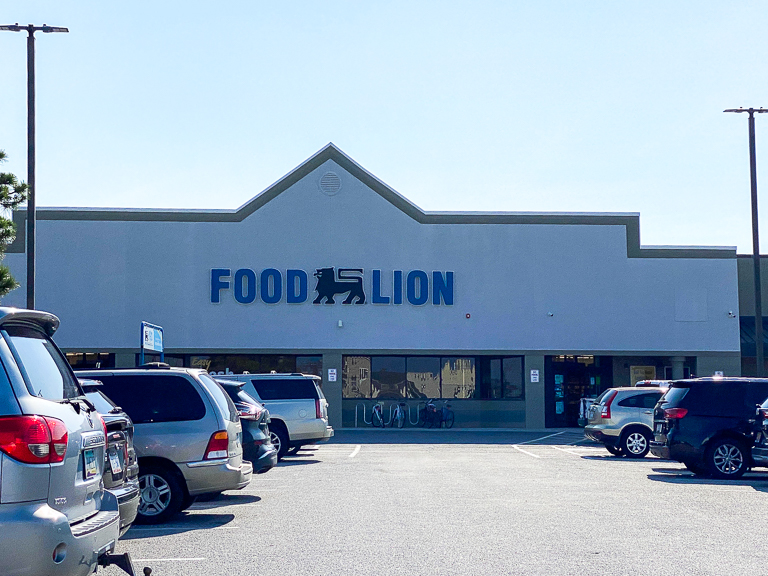 Walking in, I didn't see anything in the chip aisle, but luckily on an end-cap I saw 3 bags of Lay's Cheetos flavored chips! I've got all three now! Thanks Theresa! 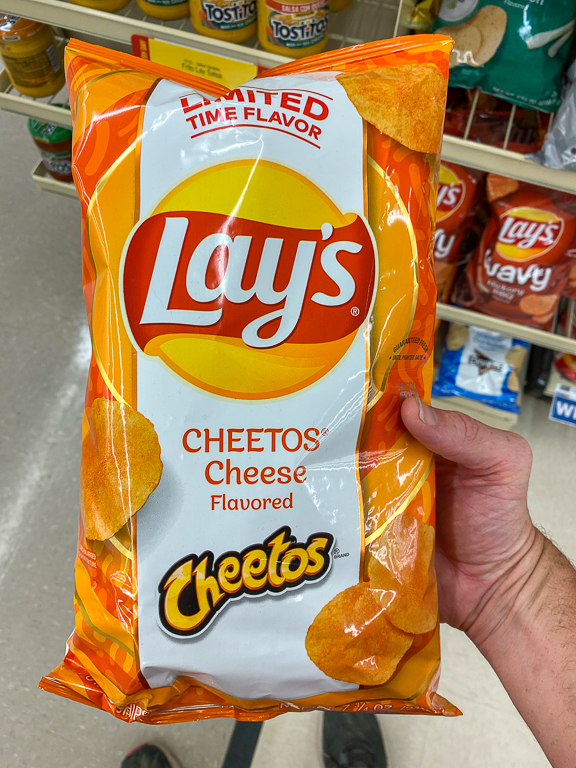 Ever wondered what Doritos Cool Ranch flavor would taste like on Lay's chips? Saddle up, because Lay's put this iconic Doritos flavors on these iconic potato chips.
What happened when the cheesiness of Cheetos snacks meets the delicious crispiness of Lay's chips? Open the bag and find out.
Who said you needed Rings to have fun? Get the flavor of Funyuns rings now on Lay's Wavy potato chips.
Try all three for a limited time! 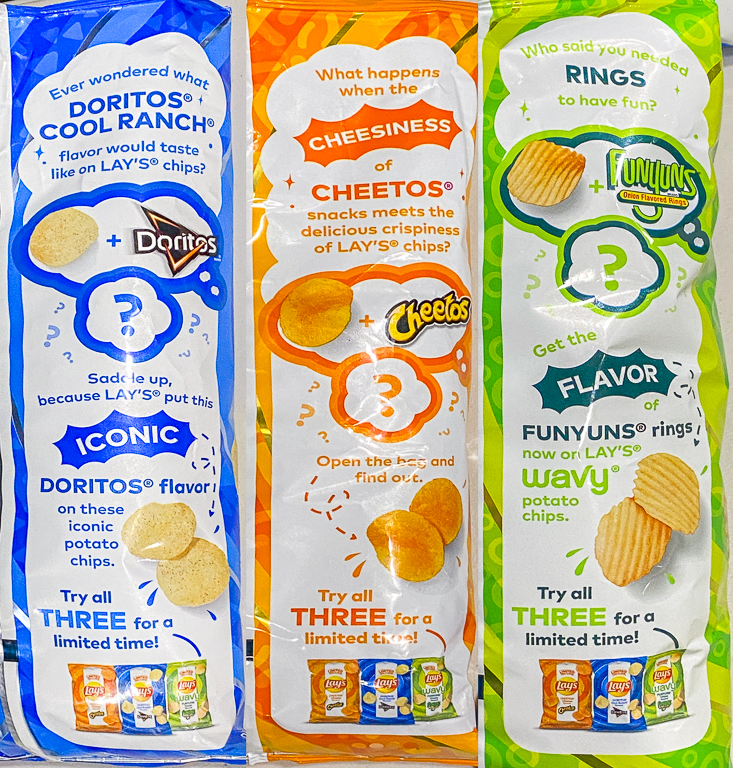 I set up the table and the kids were excited to see all the different flavors of chips.
Alli - Look Ian, there's Doritos! And Cheetos Puffs! 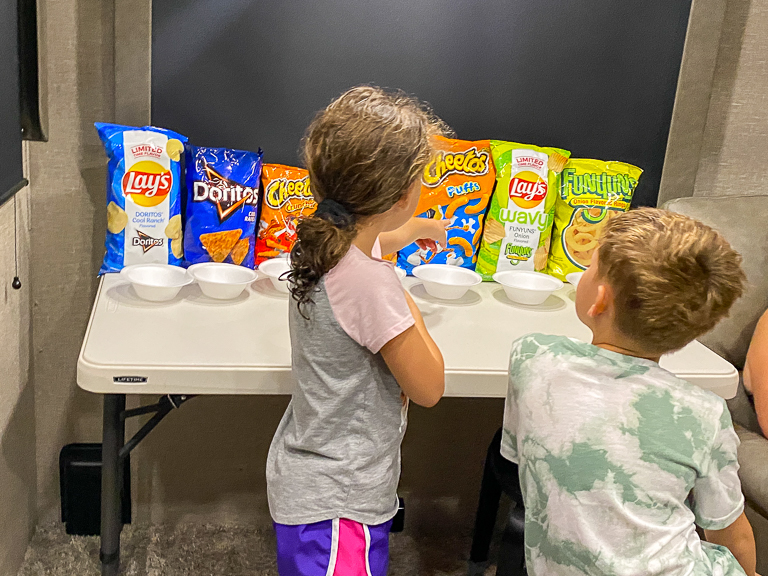 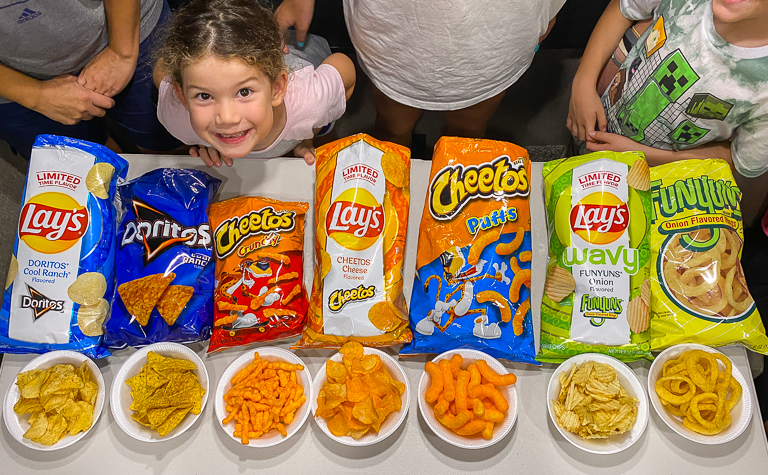 We're going to start with that strangely addictive Doritos flavor, Cool Ranch. The regular Cool Ranch Doritos chips are pretty delicious by themselves. Can it be improved by swapping the corn chip with a potato chip? 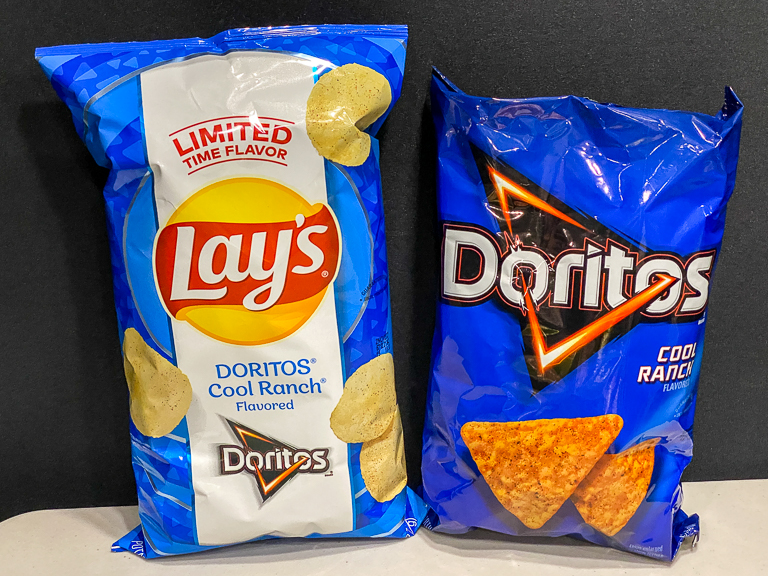 The Lay's potato chips look like they've been blasted with the Cool Ranch powder. I wish they sold this powder just by itself. I think I would put it on a few things, not just my taco shells for Taco Tuesday. Ian and I are still bummed the Taco Bell removed the Cool Ranch Doritos Loco tacos from their menu. 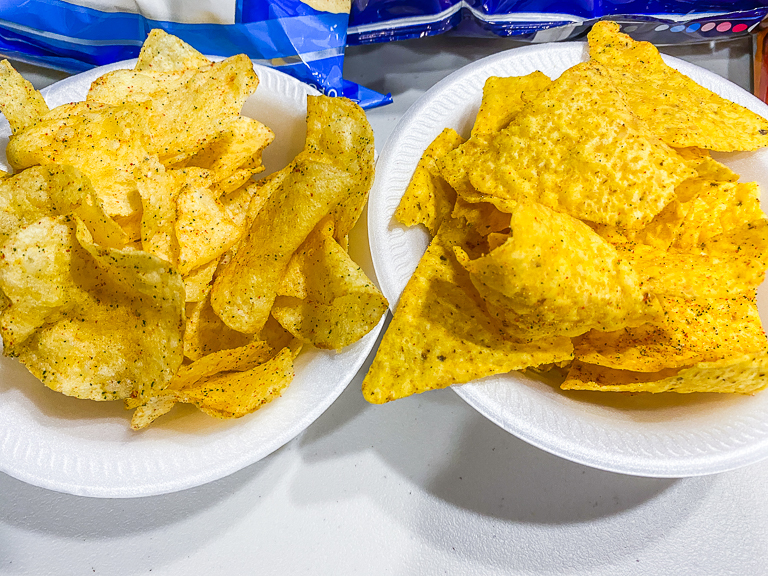 Aunt Rita loves potato chips that have curled over on themselves giving an extra crunch. The flavor of the potato chips is spot on. These are definitely Cool Ranch. The only difference is the crunch. Do you prefer a light potato chip crunch, or a rigid corn chip crunch?
Cool Ranch - While the Lays chips are good, I liked the crunchiness of the regular Doritos. Theresa, Alli, Rita, and Ethan agreed with me. Aubrey and Ian like the Lay's chips more. Both are delicious and of all the chips, this is the one that did the best job matching the original. 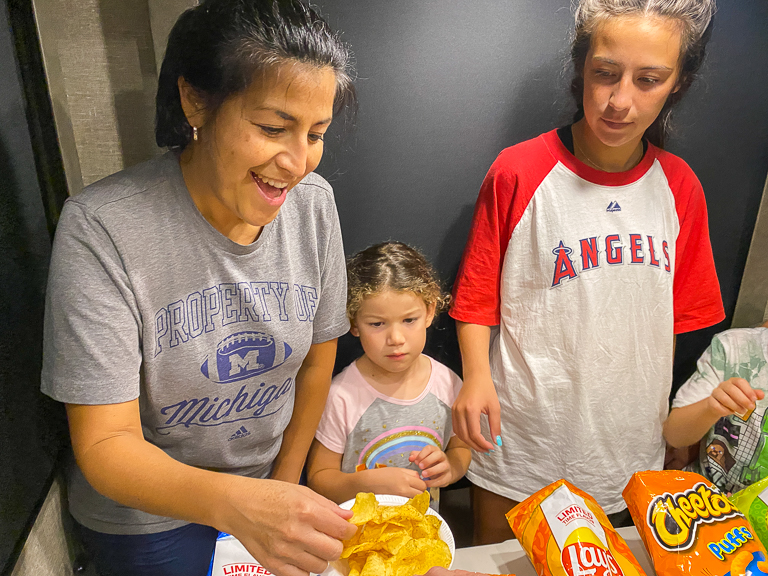 Someone seems to have found something they like, having grabbed a handful of Lay's Cool Ranch potato chips and still having 6 more things to try. 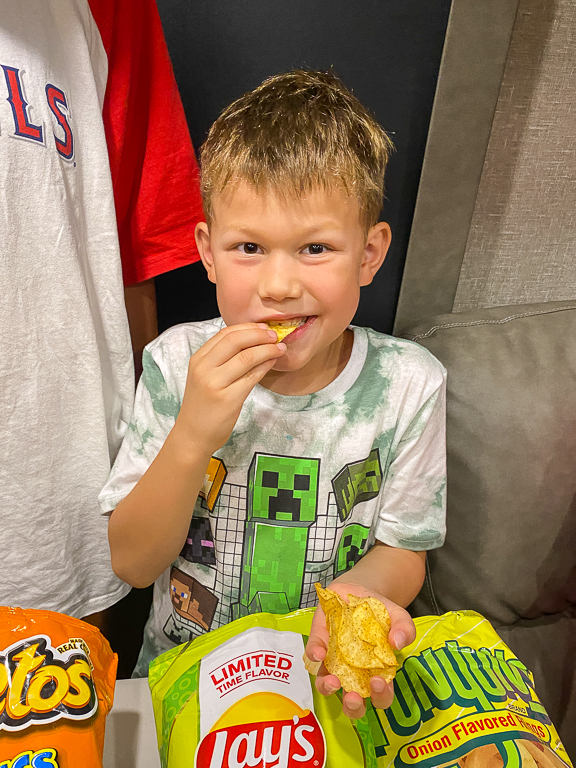 The next chip we're going to try are Cheetos. The Lay's bag didn't specify whether it was mimicking Crunchy Cheetos or Cheetos Puffs (honestly I think it's just the cheese) so with no objections from Theresa, I bought both.
Aubrey asked "Which one do you like most? Crunchy or Fluffy?"
Theresa replied "Yes." 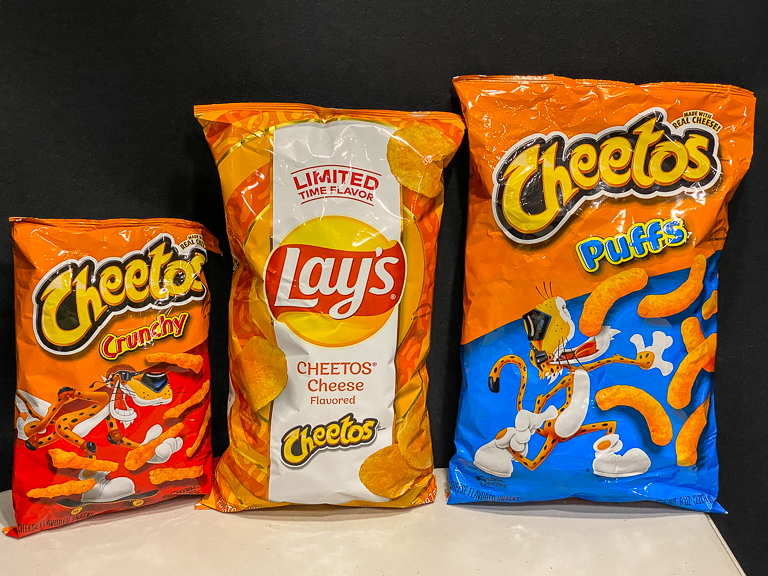 I like how the color of the Lay's Chips matches the neon orange of the regular Cheetos. These are well dusted with flavor. 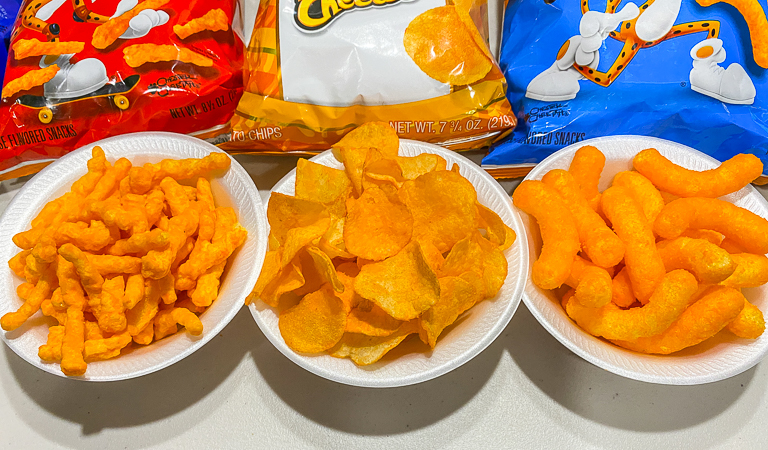 I've never been a fan of Cheetos in any form, but that's because of the texture. When you remove the texture and put all that cheesy flavor on a potato chip, I think it's delicious! These have a much stronger flavor than a regular cheddar potato chip. I think they're great!
Cheetos - Theresa didn't like the Cheetos flavor on a potato chip. Cheetos Puffs win for Ethan, Ian, Alli, Theresa, and Aubrey. Rita like the Crunchy Cheetos. I'm the only one who likes the Lay's Cheetos chips better, but that's because I don't like the texture of Cheetos. 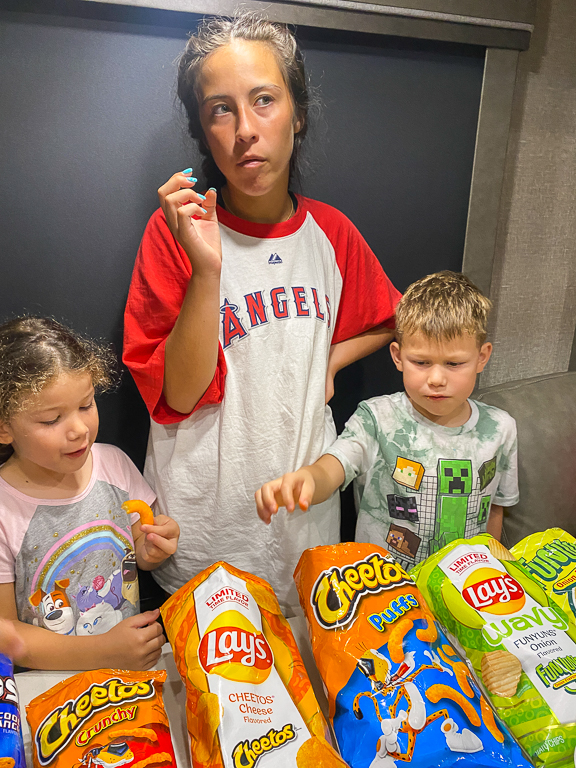 Last are the Lay's Wavy Funyuns. First of all, why did they have to ruin it with the Wavy chips. We've tried lots of Lay's Wavy chips before and for us the texture is always a disappointment. Despite being a fresh bag, they generally taste stale. 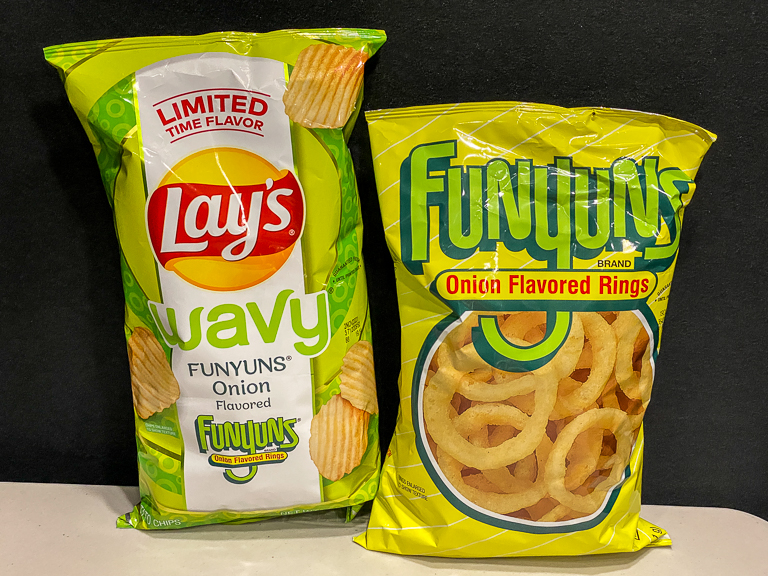 And honestly I'm confused by the chip flavor choice here. For the Cool Ranch chips, you just put the Cool Ranch powder on a potato chip. Easy. For the Cheetos, just dust those potato chips with Cheetos cheddar powder. But Funyuns? Do they have a dusting of flavor on them? Is it a plain ring but with onion flavoring on it? I guess we'll have to just see. 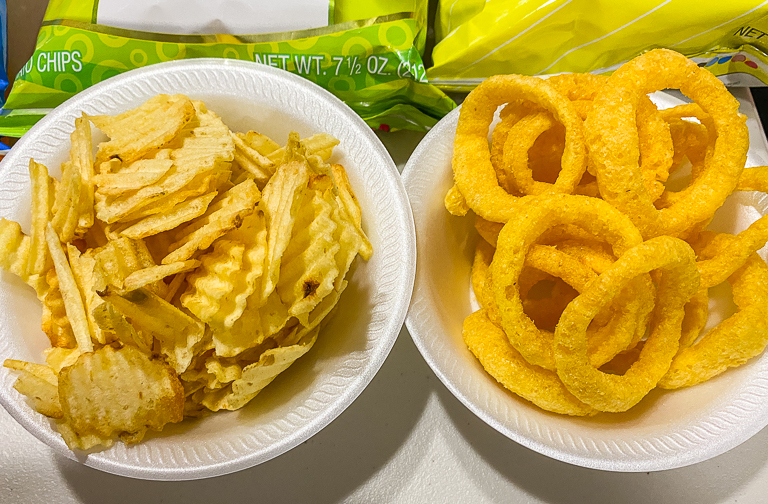 Real Funyuns, many here are fans of those. I don't like them, again because of the texture.
Funyuns - Ethan said "I do not like that." Theresa says "These are the worst chip." Do you hate the chip or the flavor? "Both." Rita says "The flavor is not strong at all. I would never know that is trying to be a Funyun chip." 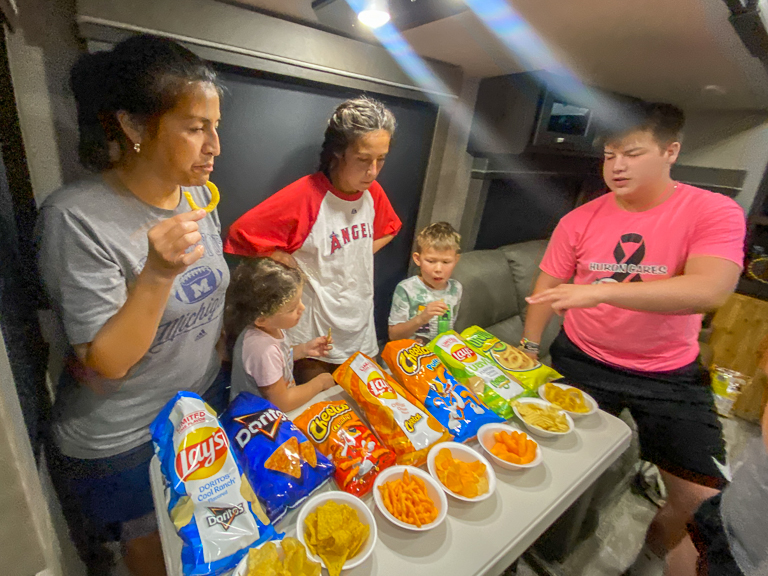 So what are the conclusions for the Lay's Flavor Swap?
Cool Ranch - Rita, Theresa,
Cheetos - My favorite of the three. Ethan.
Funyuns - Where is the trash can? These Wavy chips were the clear loser overall. 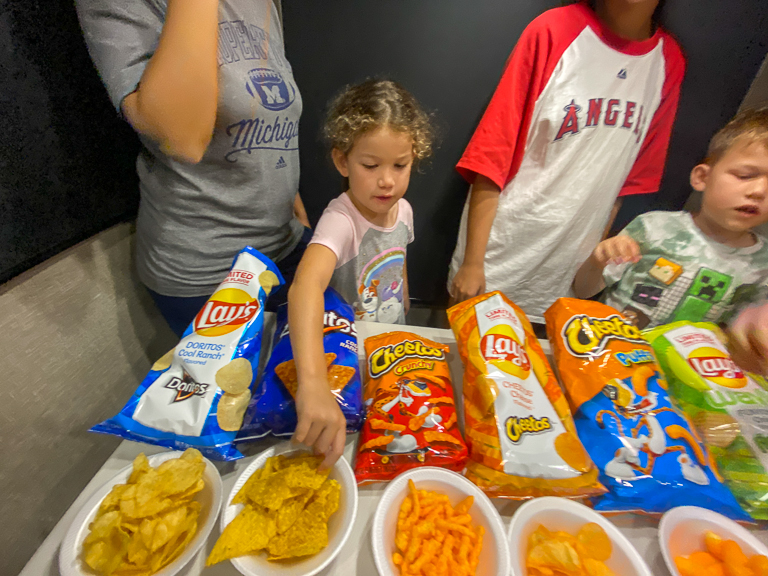 But what about the original chips? Are there any cases where anyone prefers the Lay's potato chip to the original? Turns out the answer is no. When asked to pick their favorite of everything here, these are the results.
Theresa - It depends on what you're doing at the time. If I'm having a sandwich, Doritos. If I'm by the pool, Funyuns. If you just need a snack on a work day, Cheetos. I think she just likes these chips.
Doritos Cool Ranch - Alli is adamant that these are her favorite. Mine too.
Funyuns - Rita thinks these are the best, but it's situational. Sometimes she likes something different.
Cheetos Puffs - Ethan, Aubrey, and Ian. Ian kept going back for handful after handful of Cheetos Puffs.
Aubrey said "This was a fabulous taste test. My favorite one so far."
Ethan thought this was a good amount for a taste test. Way better than the 50+ Reese's I had them try. 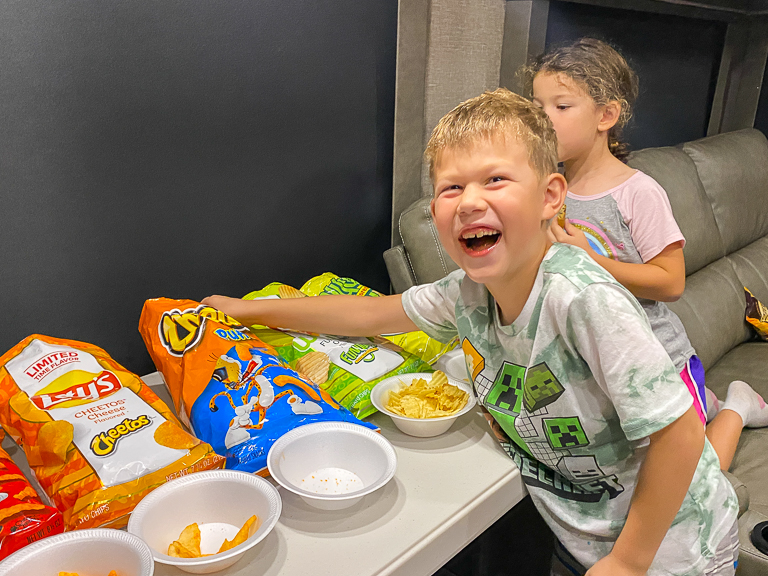