Earlier today we were at the Wright Brothers Memorial in the Outer Banks of North Carolina. That's not all there is to see out here though. There's also lighthouses! 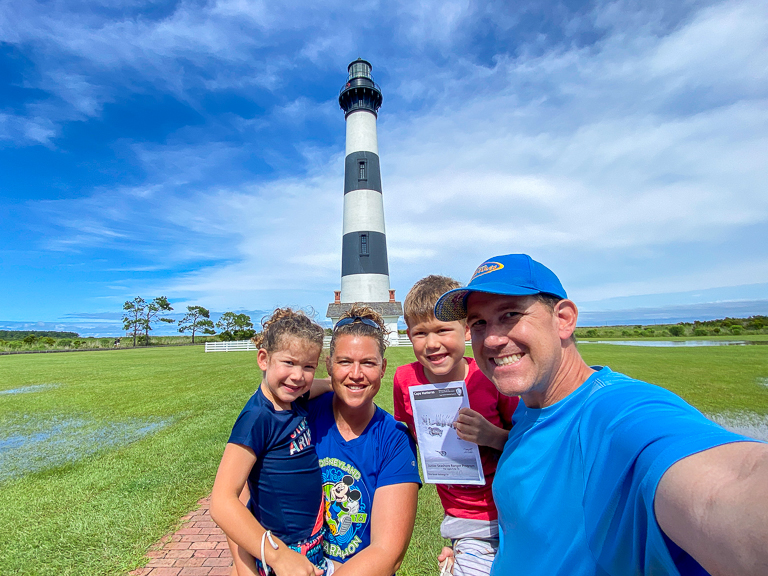 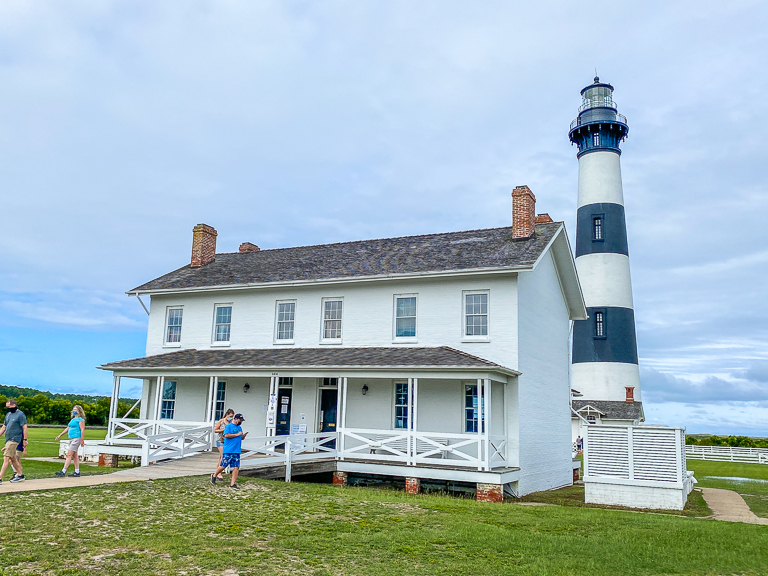 And it looks like we're just in time for a Ranger's 3pm Turtle Talk. 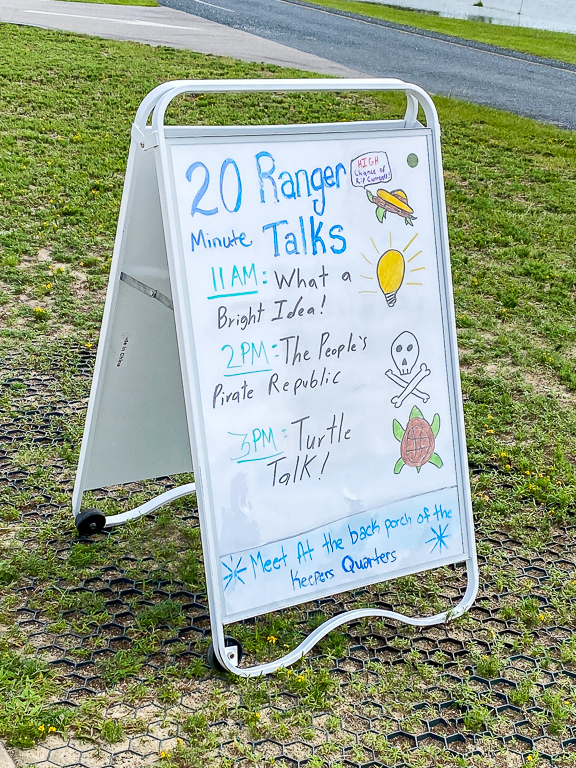 We stopped inside at the desk and saw that there's a Junior Ranger program here too! Awesome! We love doing these!
We followed Ranger Mark outside where he would tell us all about the turtles that return to Cape Hatteras National Seashore each year. Turtles always come back to the place they were born to lay their eggs, and we learned about 5 different types of turtles that come here. Turtles like the Leatherback Sea Turtle, that has a leathery skin versus a shell, that can grow up to 2000 pounds! That's amazing! 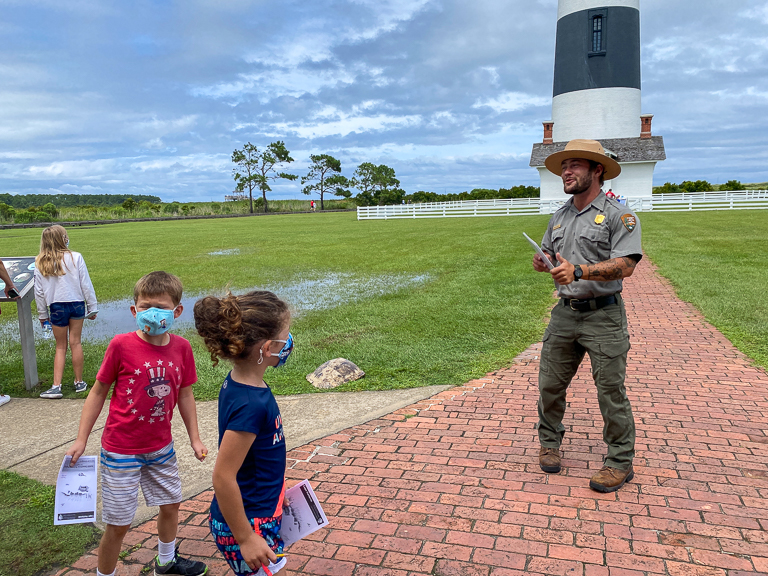 We also got an up-close look at a Loggerhead Sea Turtle shell. One of their favorite foods is jellyfish, and when they did an autopsy on this one, they found her stomach was full of plastic grocery bags. They both look very similar floating in the water unfortunately. We can see how the turtle's shell is a part of its body, with the ribs and spine attached.
We also learned that it's a rough life being a turtle. Only 1 in 1000 makes it to adulthood. Once they make it to adulthood, they have no natural predators, but their biggest problem are humans. Turtles get caught in our fishing nets and eat our trash. Then Mark showed us pictures of baby turtles to make us all feel better. 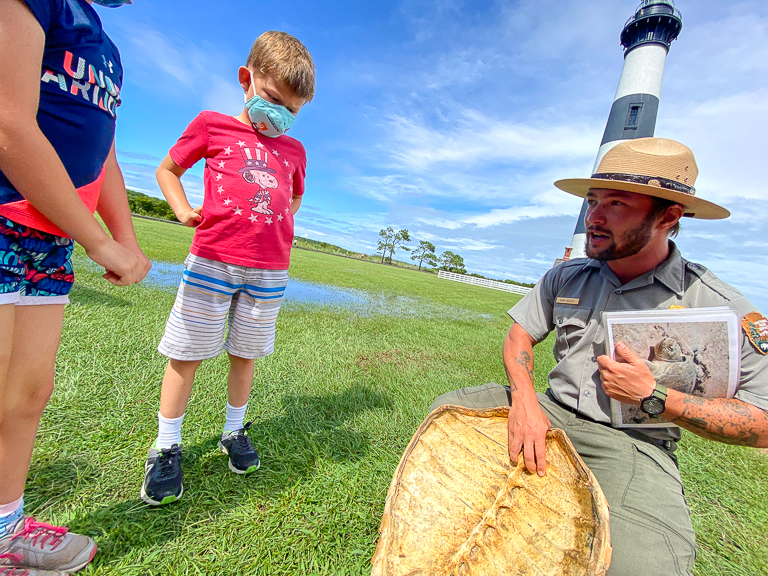 The kids got to hold the shell of this one. 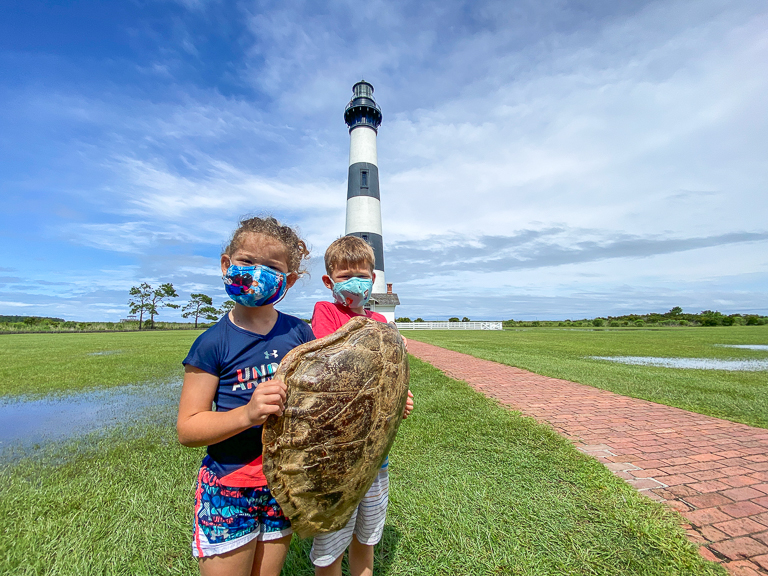 Next we've got to work on our Junior Ranger booklet. First they had to learn about ocean rip currents, and what to do if you ever get stuck in one. Beaches here are notorious for having rip currents, and there was a beach warning on the day we went. Afterwards, they had to complete 5 different activities, like learning about coastline erosion, Pirates and drawing their own pirate costume and pirate flag, looking at sources of light pollution at night that might distract baby turtles, and more. 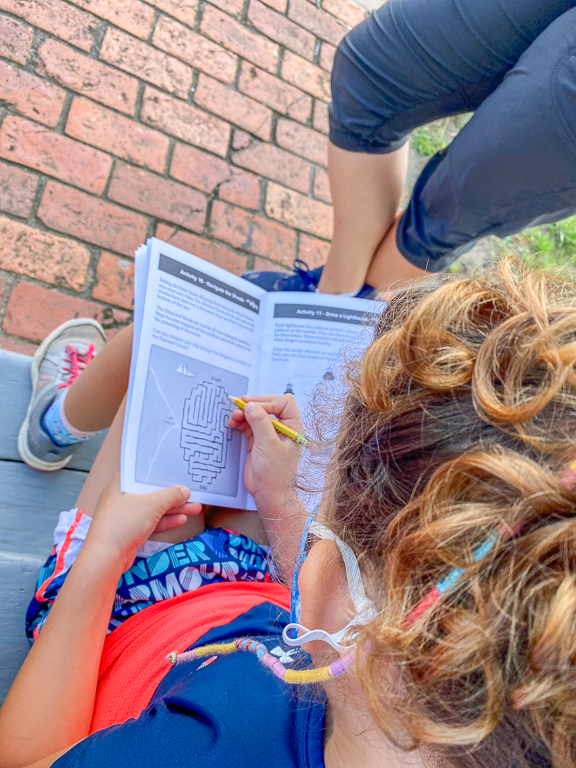 There's multiple lighthouses on this coast and you can tell them apart by their markings and flash patterns. The kids were shown 3 lighthouses, but they were missing their markings. They had to draw them in to complete the activity. 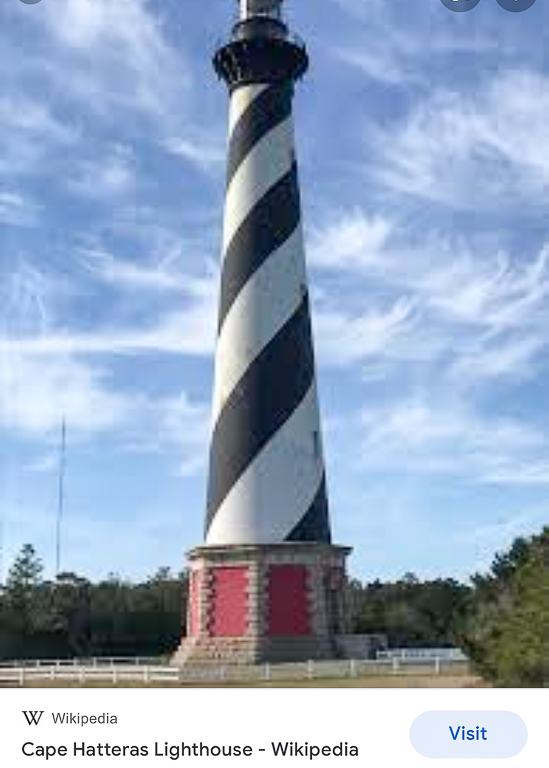 I've seen this one before. 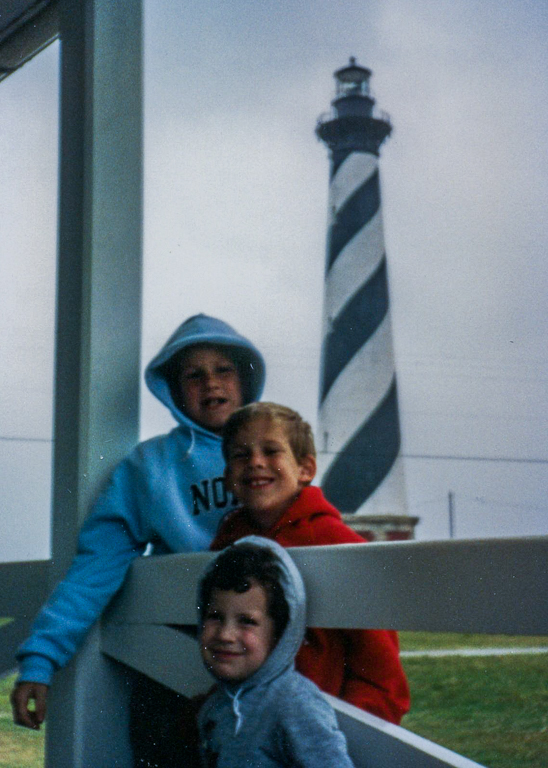 But we're here at the Bodie Lighthouse, and it's looking really amazing with that bright blue sky and clouds in the background. 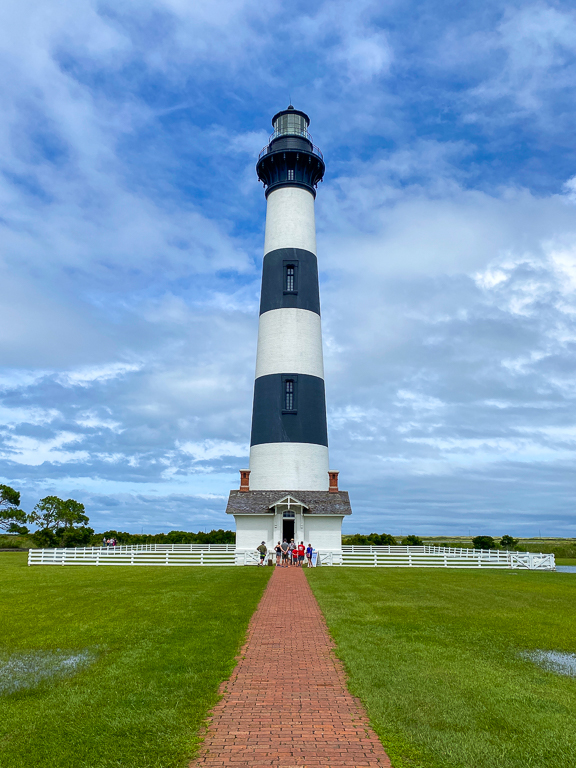 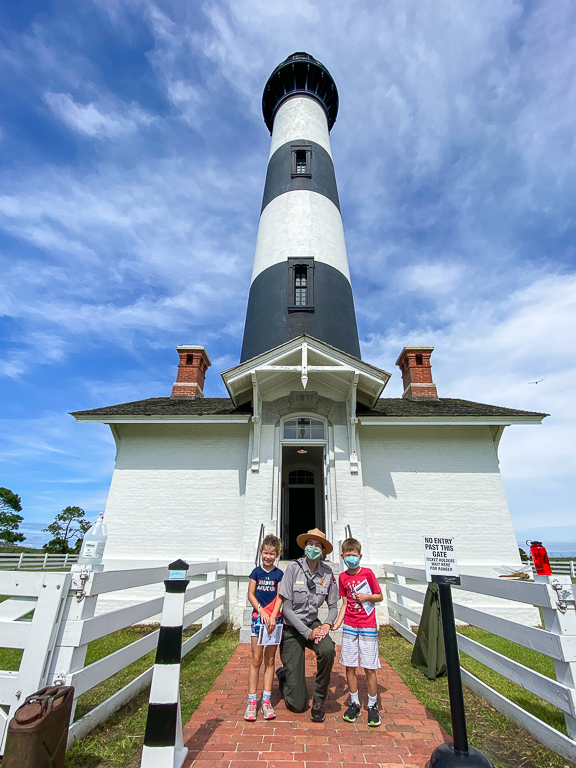 And if she's just in the background of their photos, she'll pose like this. Giving them a nice little surprise to find later one. 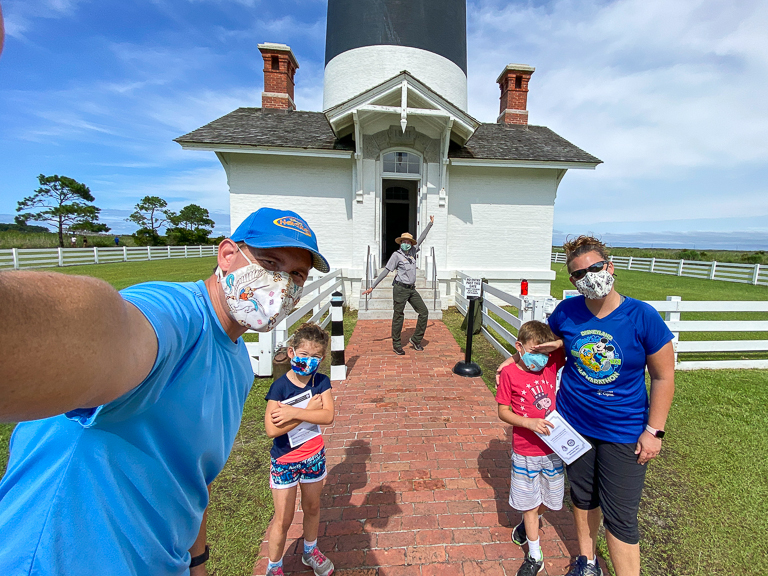 Ranger Dillion, who is also an underwater archeologist, swore the kids in as Junior Rangers. He does his a little different. "I promise to pick up litter, be safe swimming, to always insist on paper bags, to do my best to resist disposable plastic straws." 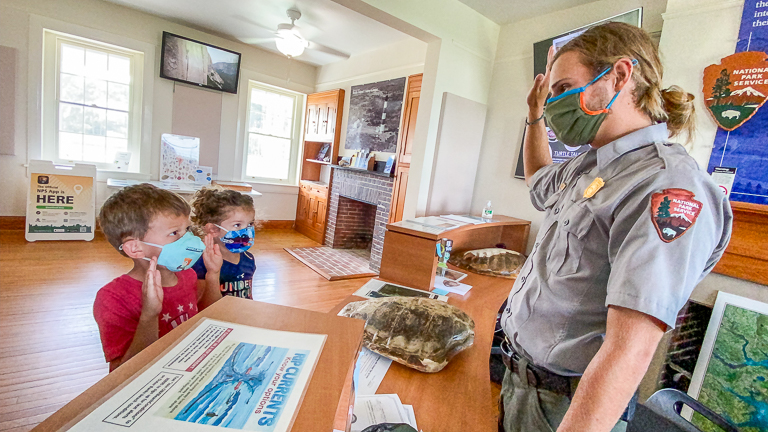 The badge has the Bodie, Cape Hatteras, and Ocracoke lighthouses on it. 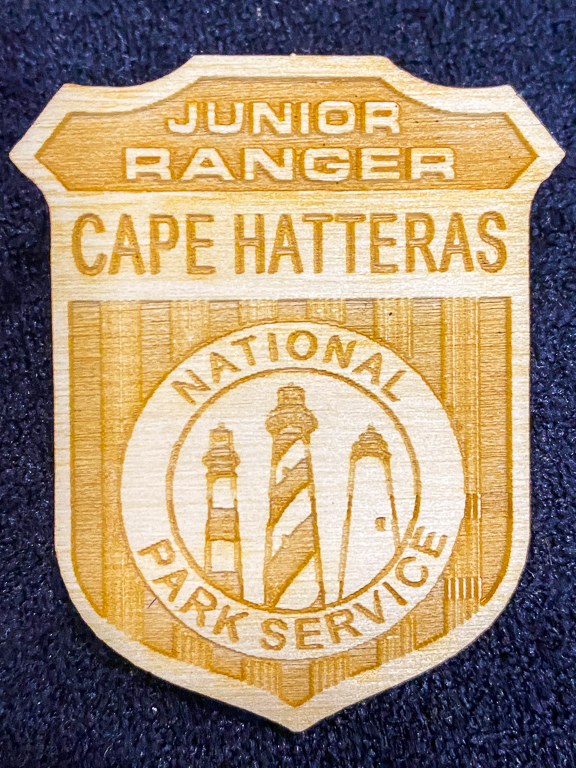 In the kids' book, we learned that this area is one of the darkest areas on the coast. Maybe we'll be coming back here again before too long for another special event coming up.
There's a pier behind the lighthouse that takes you over the marshy grasses and out to the water. You can sometimes find interesting animals here, but we only saw birds in the far distance. 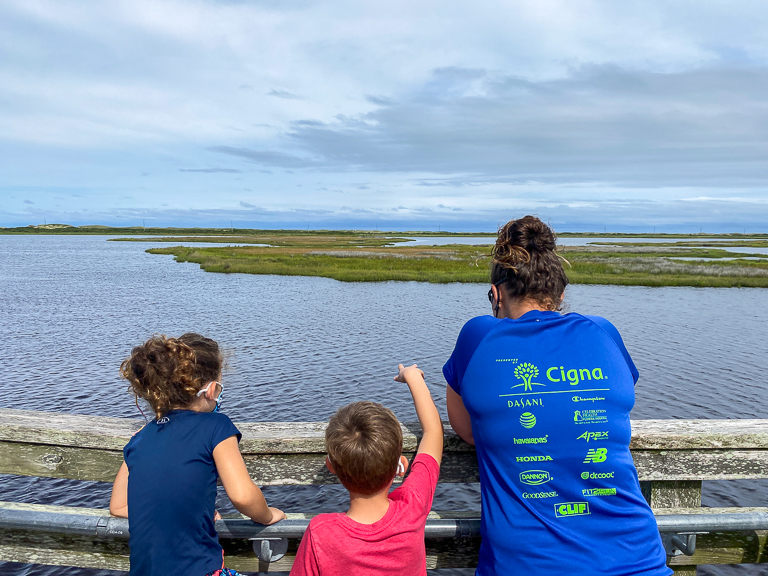 And these Cattails, which Alli thought looked like toasted marshmallows on a stick. Actually I learned from Survivorman Les Stroud that every part of a Cattail is edible. I don't think it tastes like marshmallows though Alli. 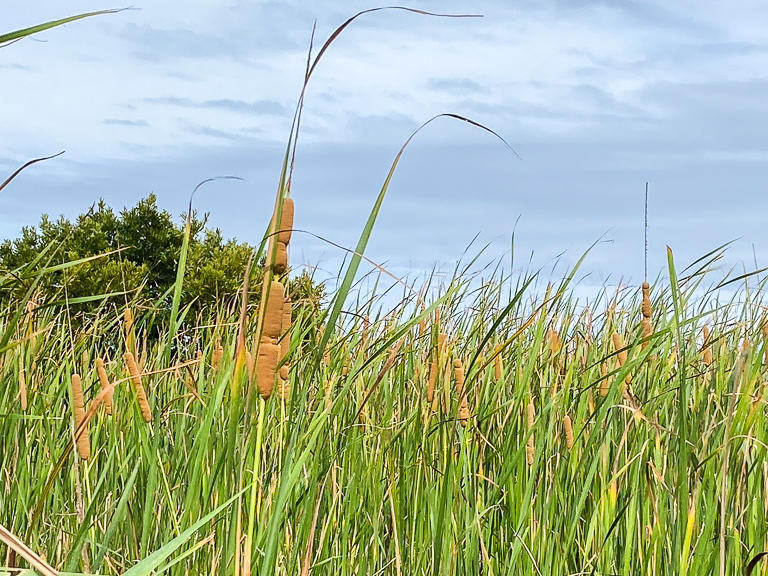 Time to make our way back to the lighthouse. There's one more thing we have to do. 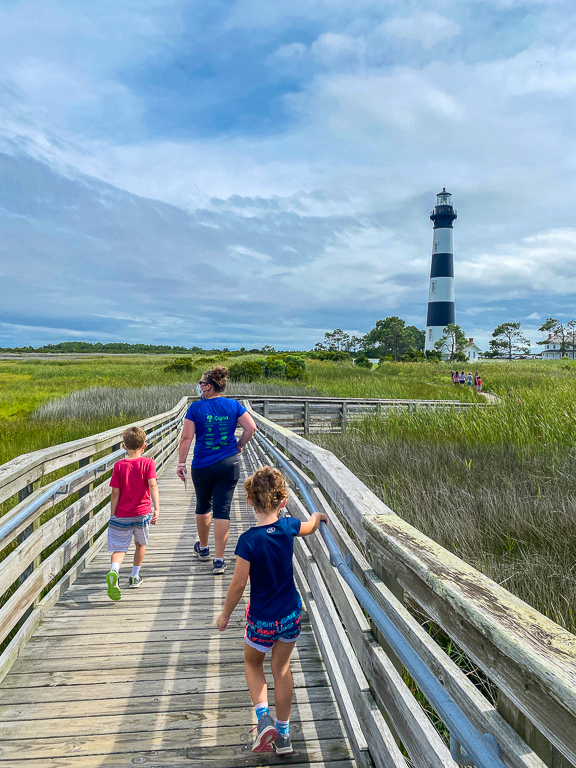 Ian found a bee digging out a hole. I do remember getting stung when I was little from bees that lived in a hole in the ground. 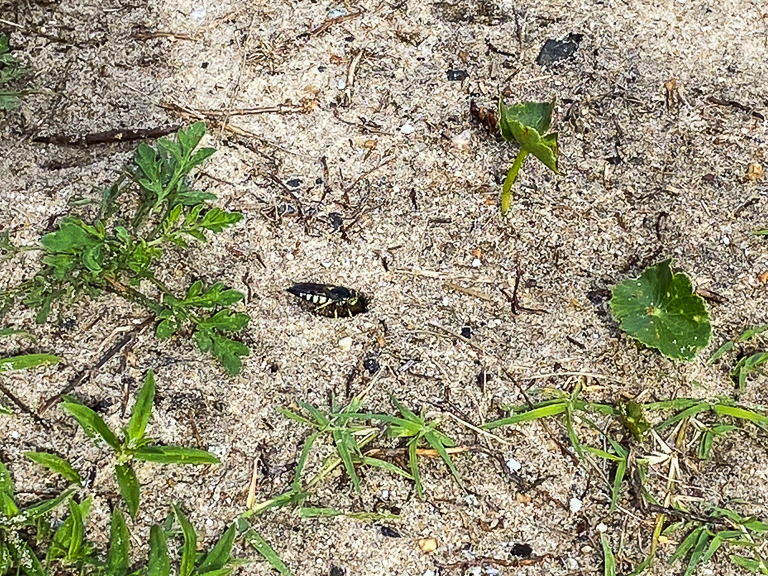 Back in April we were on the West Coast and got to play in the Pacific Ocean. Now, 3 months later, after having driven by car across the country, we're on the East Coast and at the Atlantic Ocean! It's just behind these dunes. 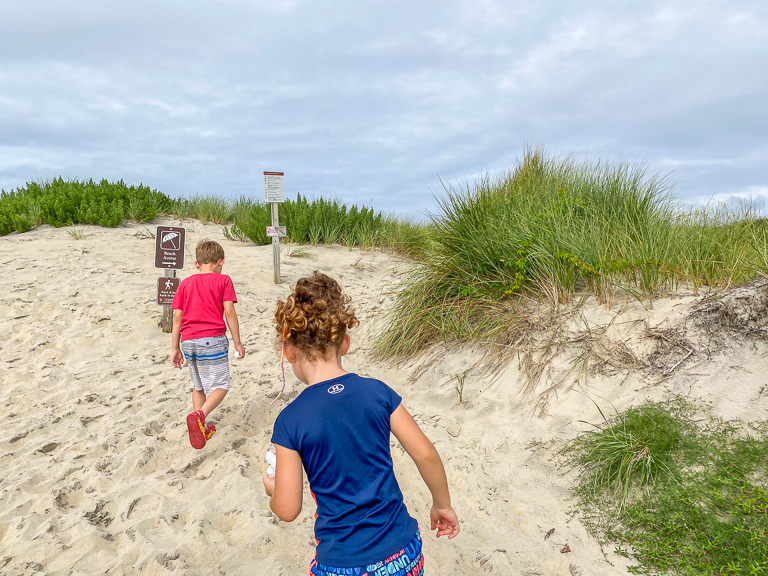 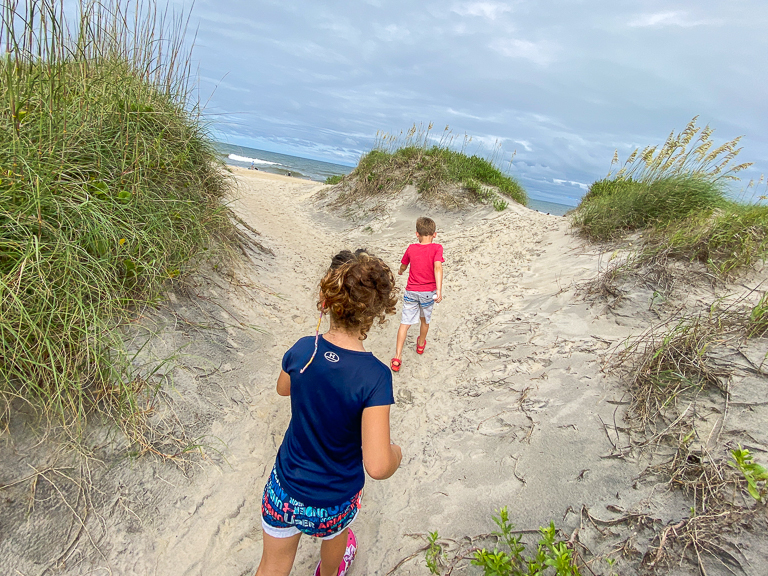 It's the kids' first time putting their feet in it. I've got to get a video of this!
Here it comes! 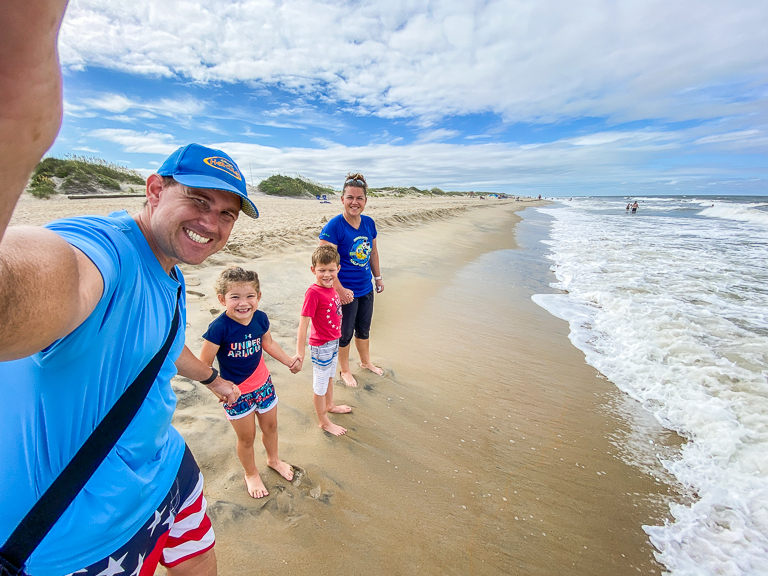 We've made it coast to coast! 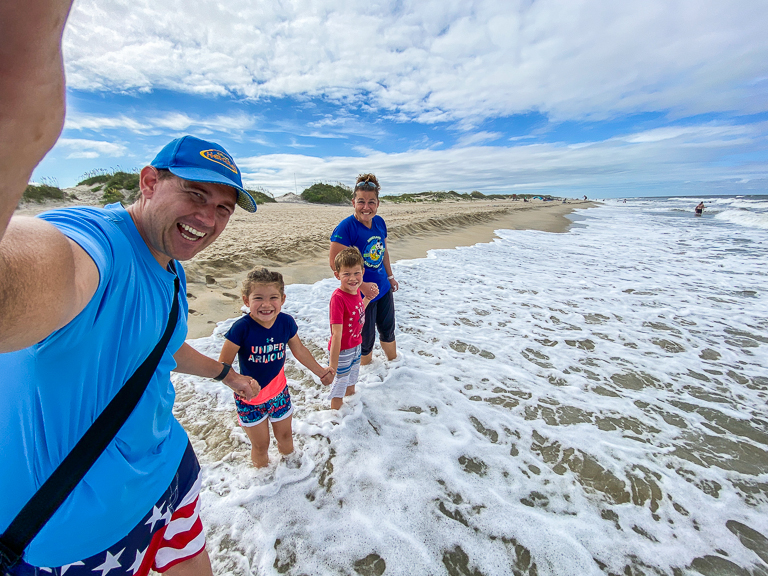 It's not nearly as cold as the water back home. No, gotta correct that. Back in California. Our home now moves with us! 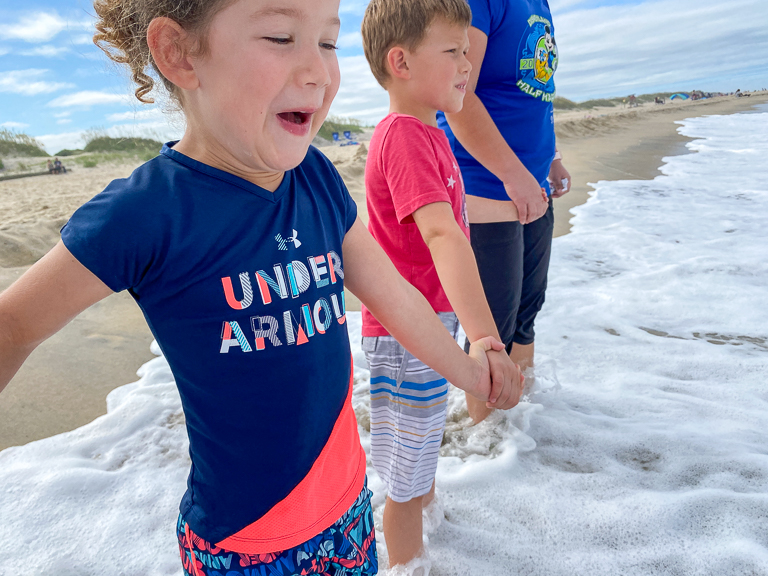 The kids are already on the lookout for interesting shells. 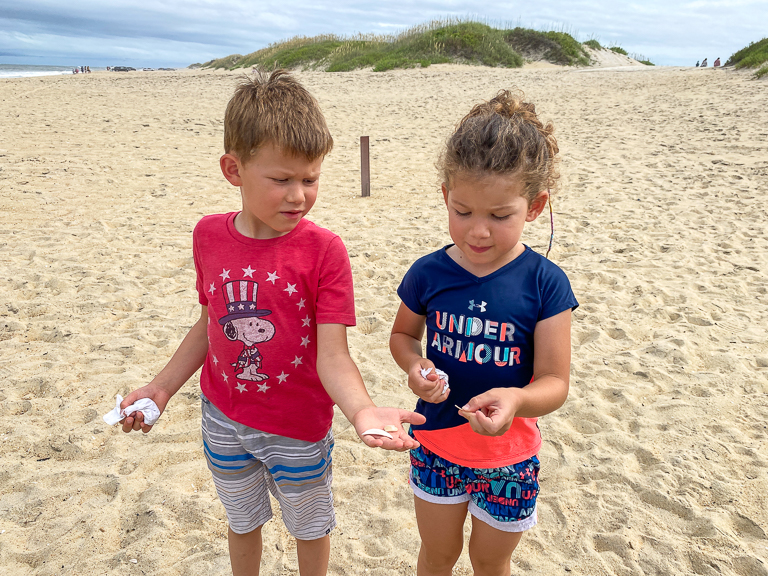 Whoa! Horses here on the beach!

It's about time to head back home to the RV. It's a 2 hour drive back and we're starting to get hungry for dinner. I think we'll be back again before too long though. 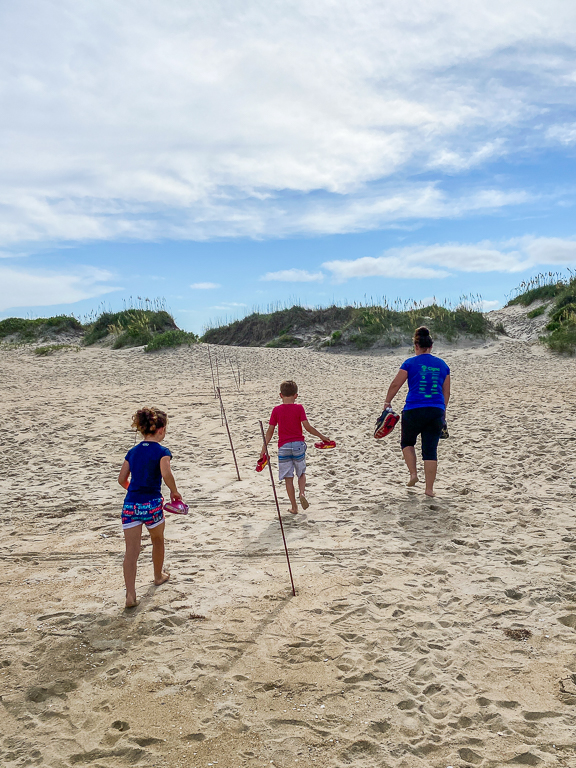 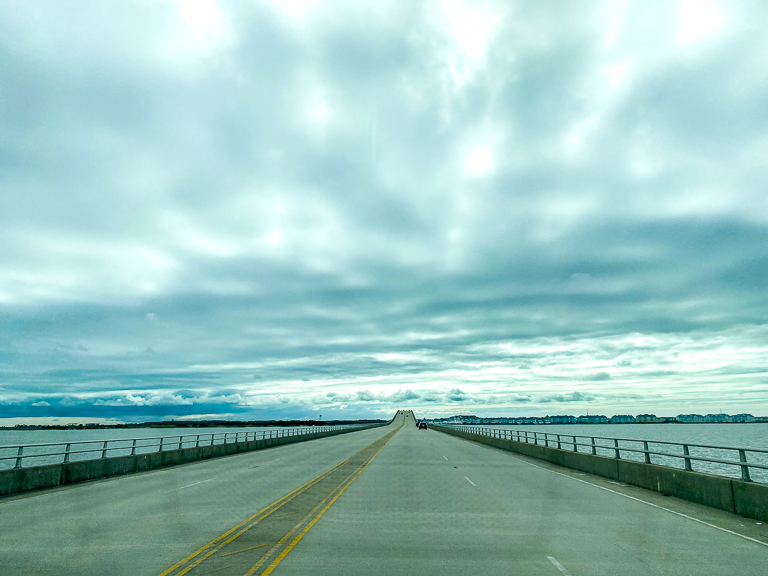