I love that we get to go around the USA and visit sites of historical interest. Today we're navigating the Historic Triangle of Virginia, including Yorktown, Jamestowne, and Williamsburg. 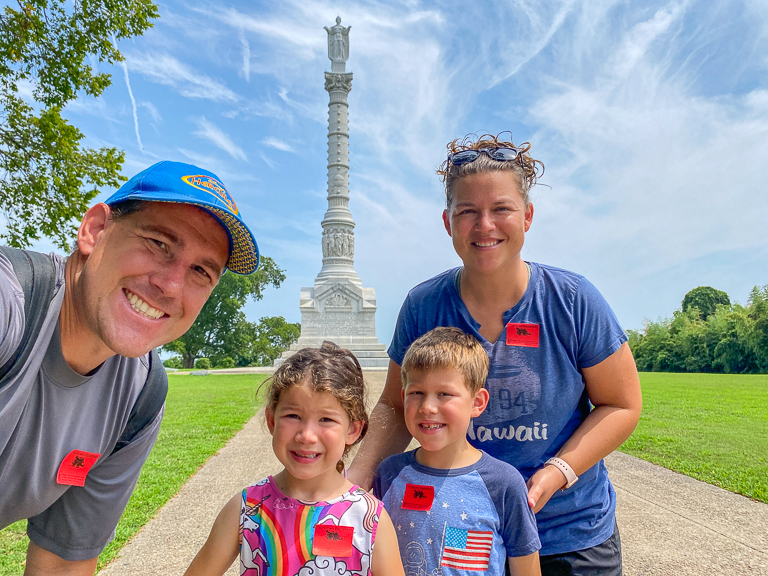 Yorktown is probably most famous for being the site of the Siege of Yorktown. This town was the location of the battle between General George Washington and British General Charles Cornwallis in 1781 during the American Revolutionary War. Washington's defeat of Cornwallis here effectively ended the war. 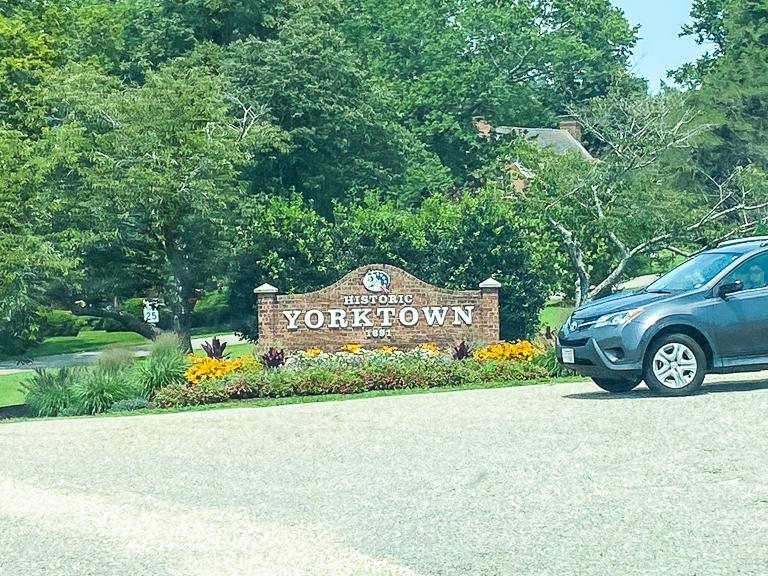 The National Park Service maintains Yorktown and so the visitor's center is our very first stop. 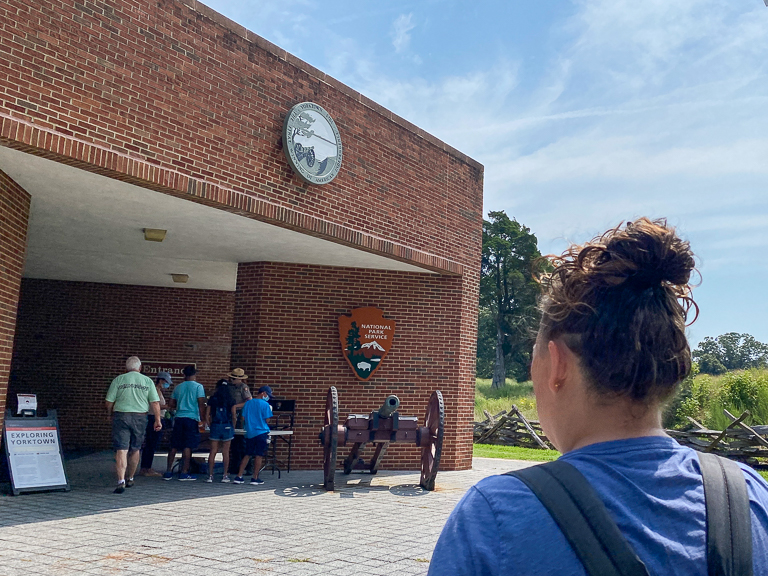 Because it's here that the kids can pick up their Junior Ranger Activity Books! Time to earn another Junior Ranger Badge! There's two different packets for the kids, one for Alli for kids 6 and under, and one for Ian for kids between 7 and 9. Someone put in some effort to make these packets. 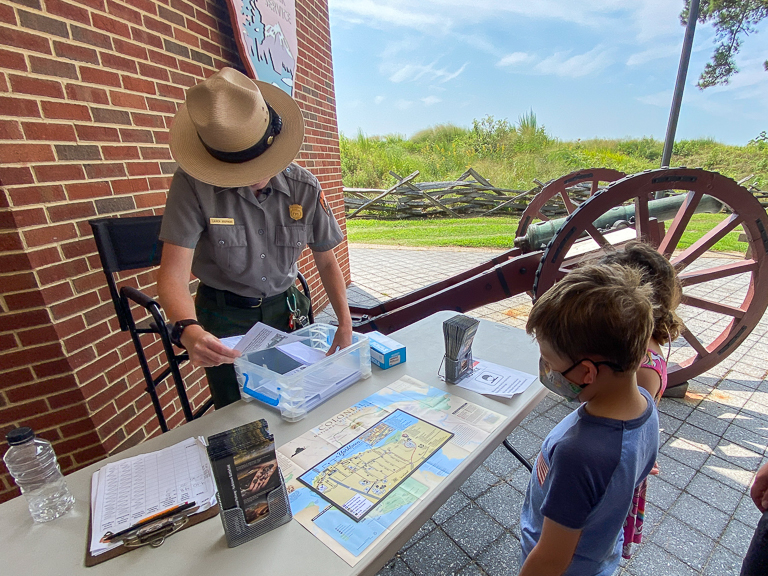 Let's head inside and get started! 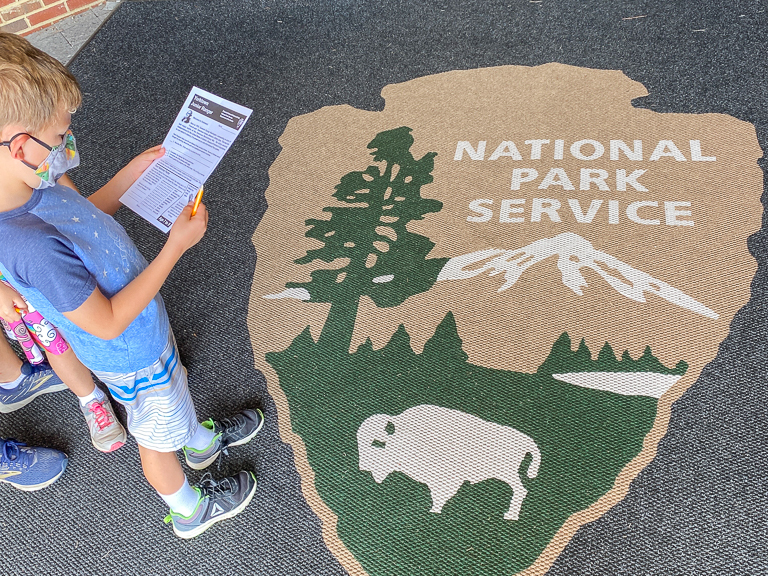 Many of the National Parks are free to enter. This site, as well as Jamestowne are an additional fee of $15 per adult, with kids under 15 years old being free. Fortunately we bought the annual pass when we visited the Wright Brothers Memorial, so it's free to us! 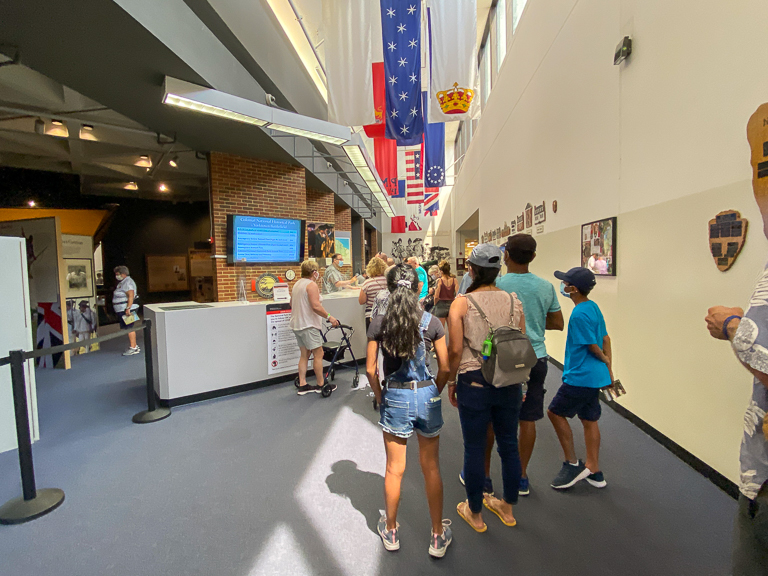 Inside the visitor's center is a small museum.
This is the Lafayette Cannon that was actually used by the British in the Siege of Yorktown. It was capable of firing a shell over 14 miles! There is a distinctive dent in the cannon where it was hit by an Allied cannonball. 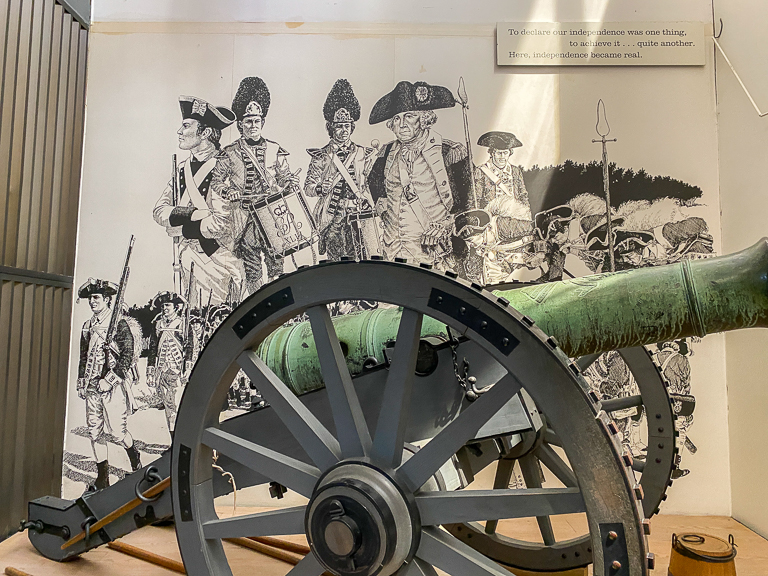 A topographical map of the town, held by the British, while George Washington as well as French troops attacked. 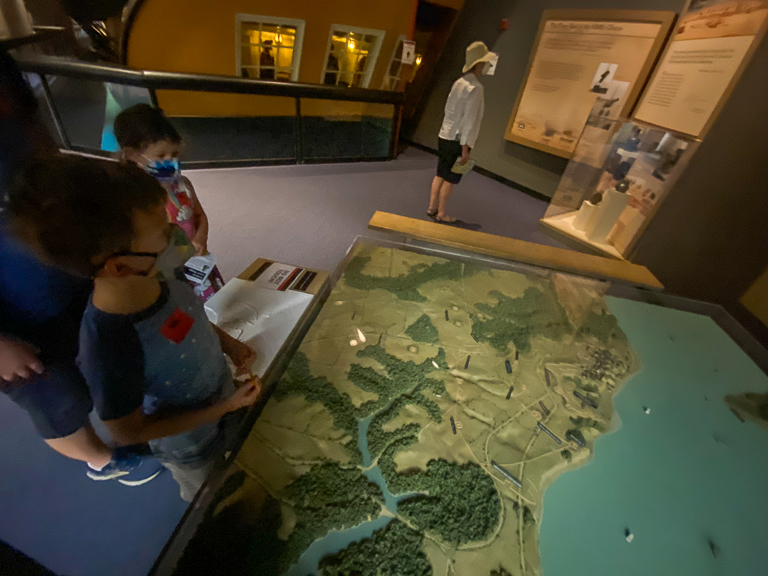 Inside the museum is a scale model of a ship. 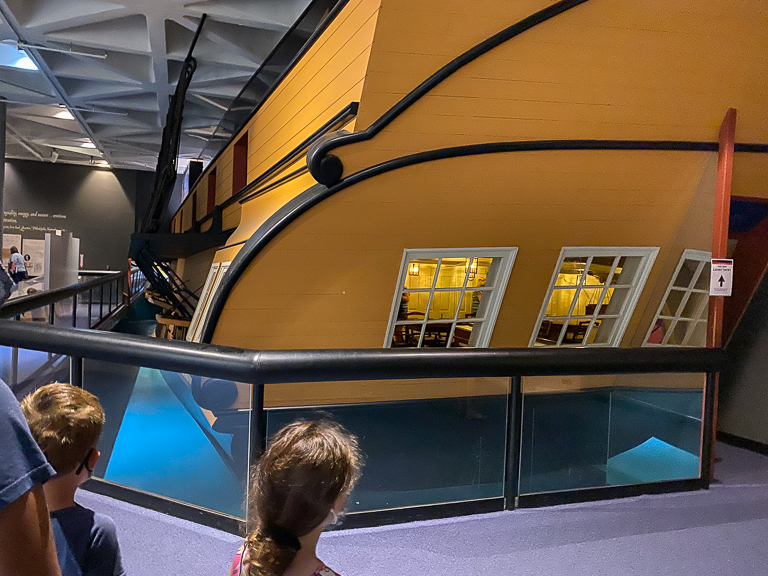 Where we get to look inside and see what living conditions would have been like. 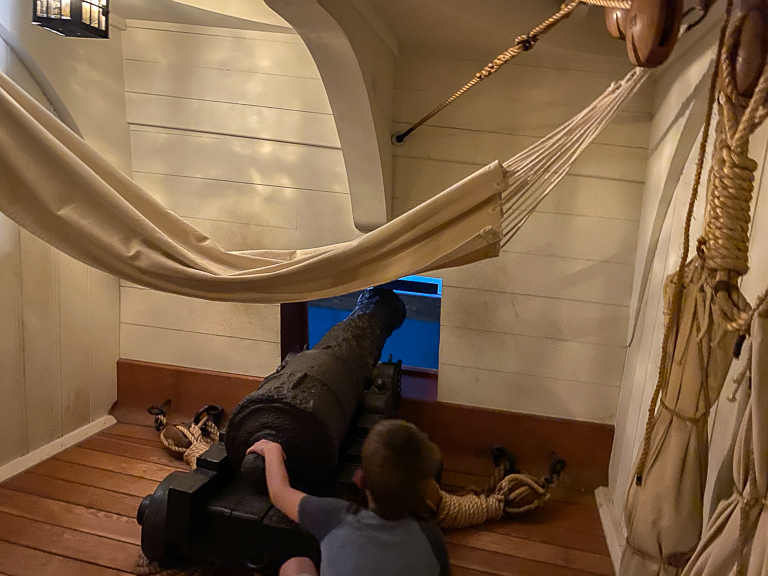 And there's cannons too! 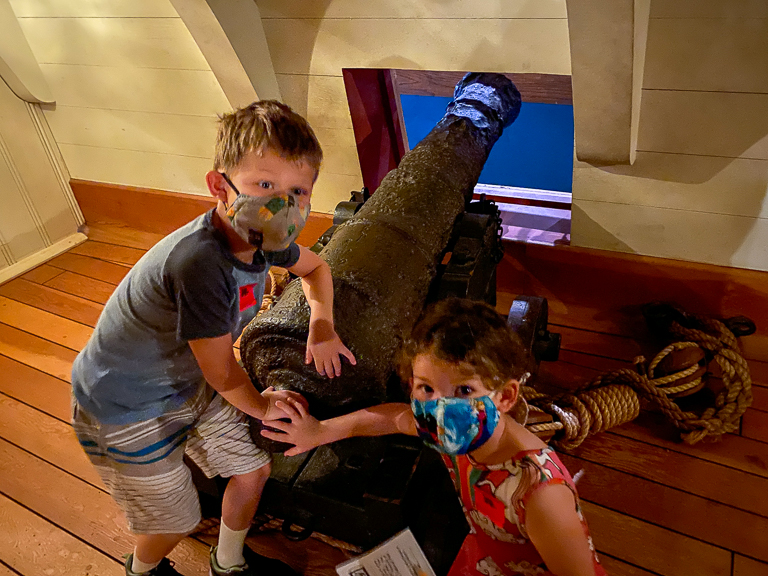 General Washington and his troops had to dig earthworks (trenches and hills) to protect their troops from the British artillery. 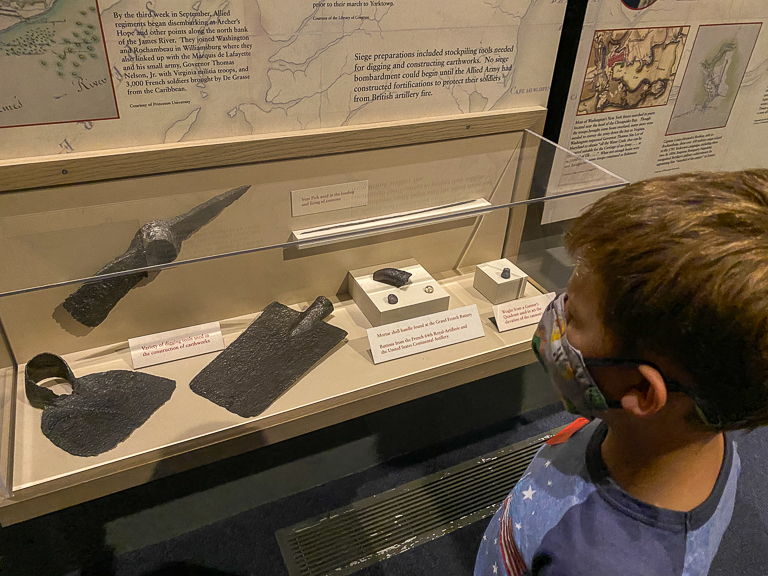 And speaking of General Washington, they have some special pieces of history here. 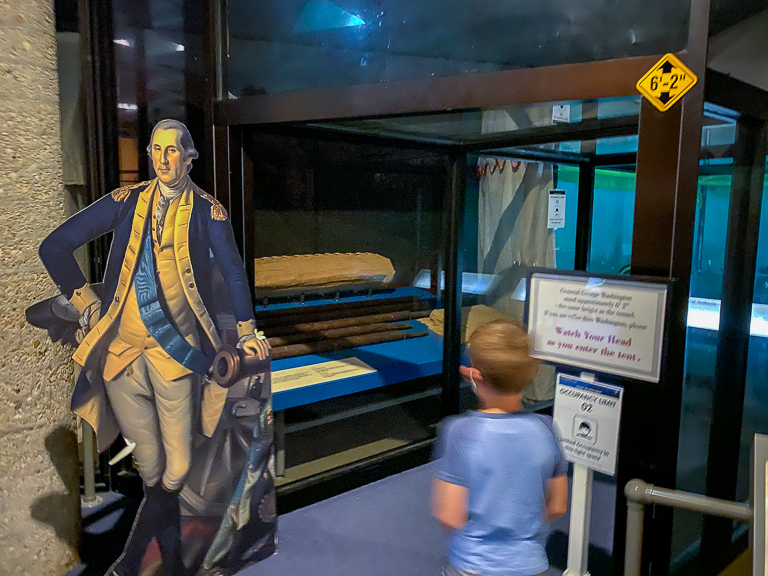 This is George Washington's original campaign tent, specifically his dining tent, purchased in 1776 and used through the Revolutionary War. 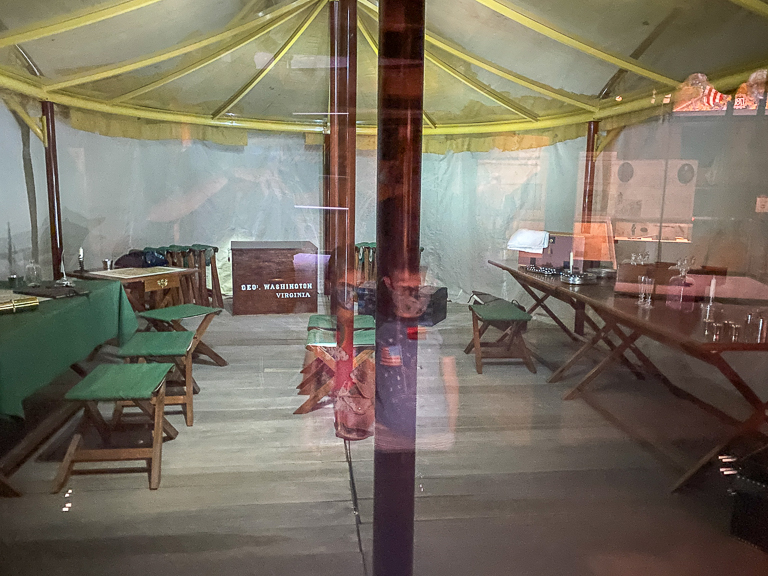 And there's history from the British side too. Here is General Cornwallis's Campaign Table, also from the Revolutionary War. 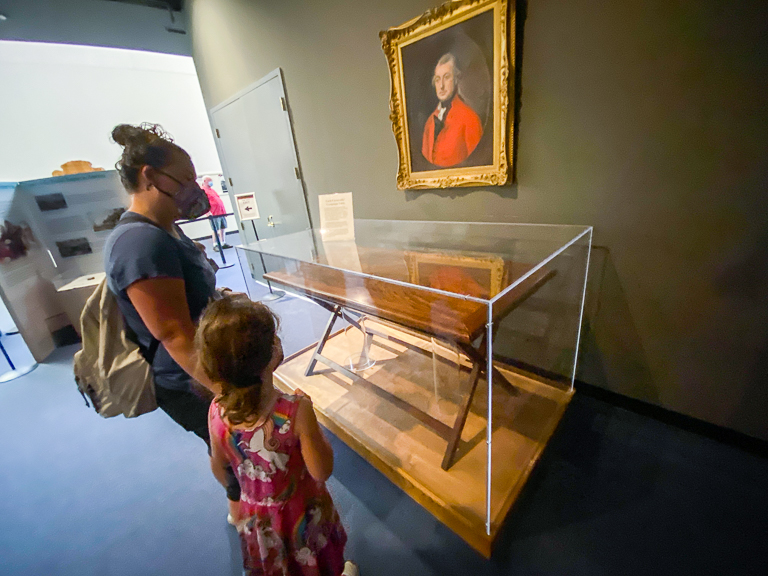 We've seen the museum, but let's go see the town! Part of the Junior Ranger activity book is to look through the town, identifying various houses and monuments. 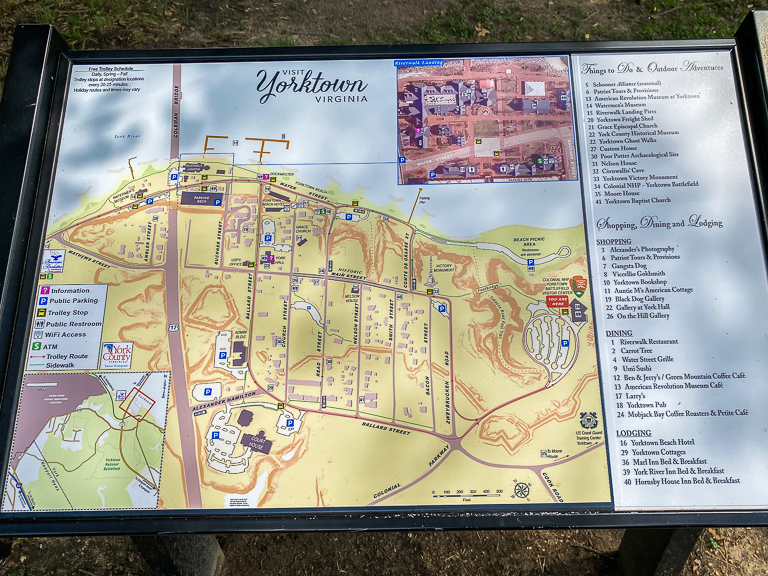 Like the Victory Monument. This 100 foot tall monument commemorates the important victory won here by the American and French troops in the USA's fight for independence.

Next we walked through historic Yorktown. 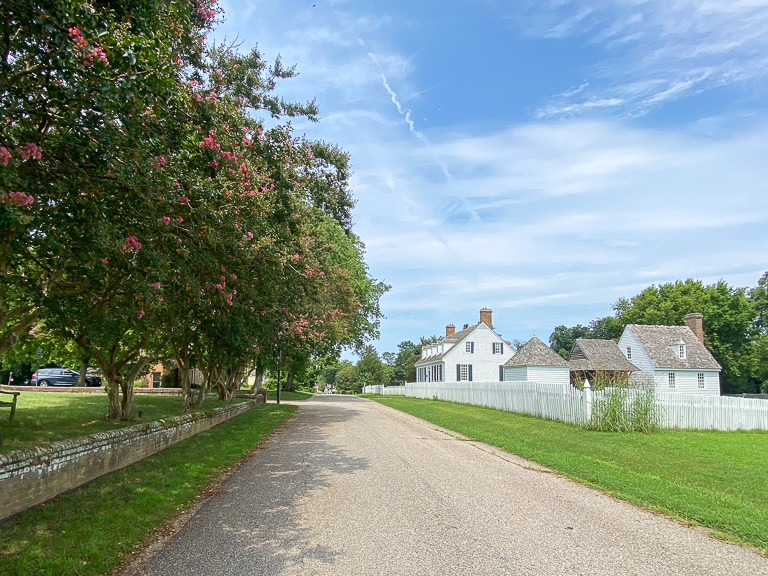 It's still a treat to see the local wildlife. 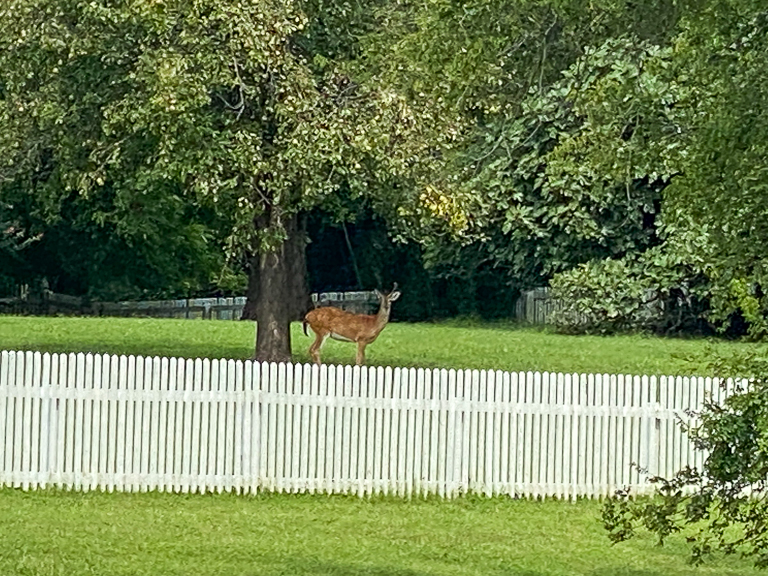 The Nelson house was owned by Thomas Nelson Jr, one of America's Founding Fathers and signer of the Declaration of Independence. There's a beautiful garden in the backyard, and Ian's Junior Ranger book sends us there to find a particular plaque. 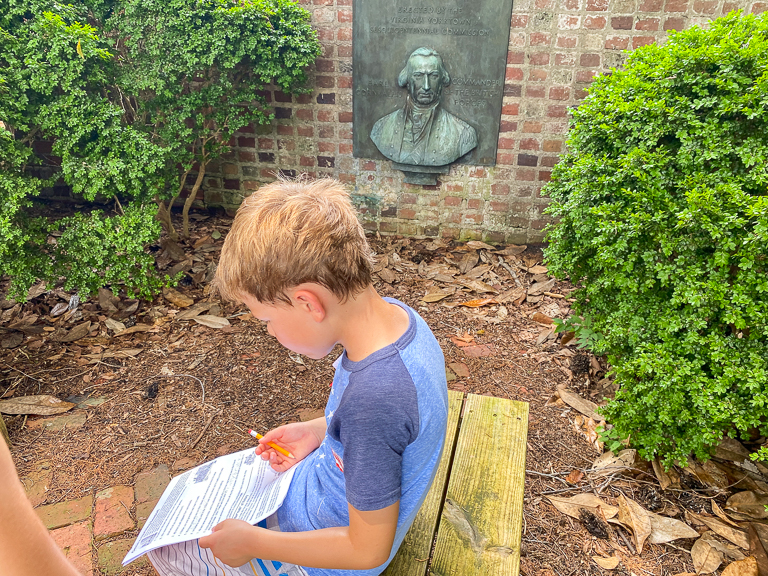 This is actually a tribute to Lord Cornwallis, Commander of the British forces during the Revolutionary War. "A Testimonial of the Affection of Virginia to the Mother Country." 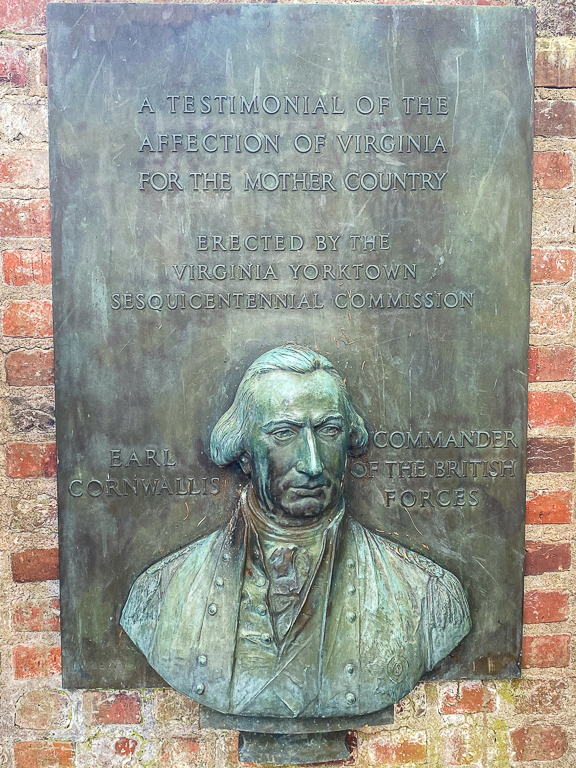 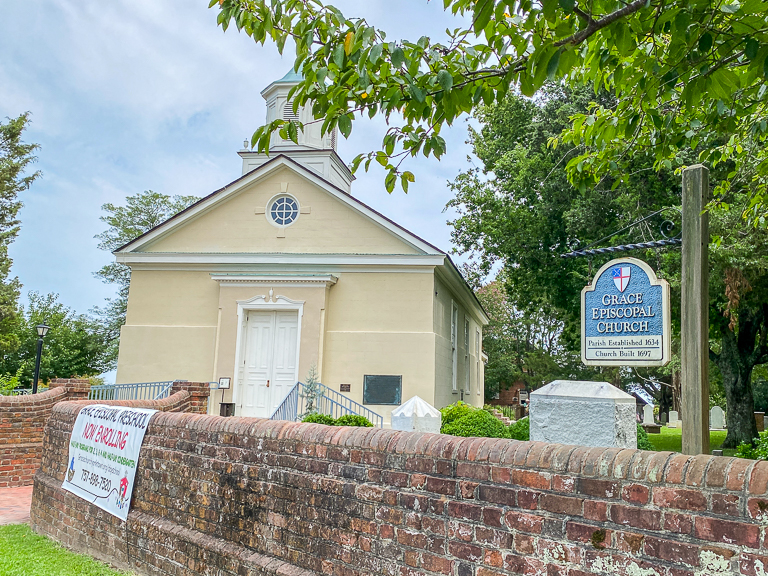 These Junior Ranger Books have been pretty challenging. We've been looking around the town for things like "The house with brick that is still chipped from cannonballs" or "A father, son, and grandfather rest near my walls." It's hot, but we've completed what we need to to get those Junior Ranger badges. 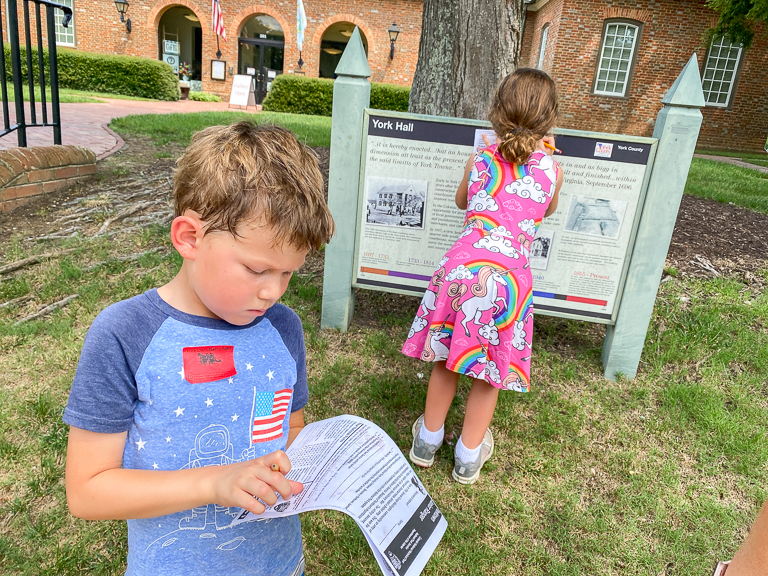 Back at the Visitor's Center they got sworn in as Junior Rangers. 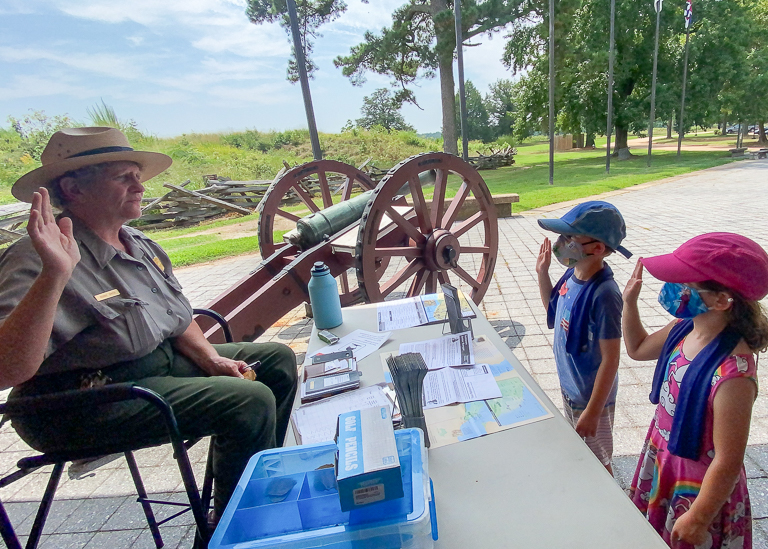 We'd planned to get photos out front, but the Ranger insisted we go inside and get a photo in front of something that was actually part of the war. And so, inside we went, where the kids got their photos with their badges in front of the Lafayette cannon. 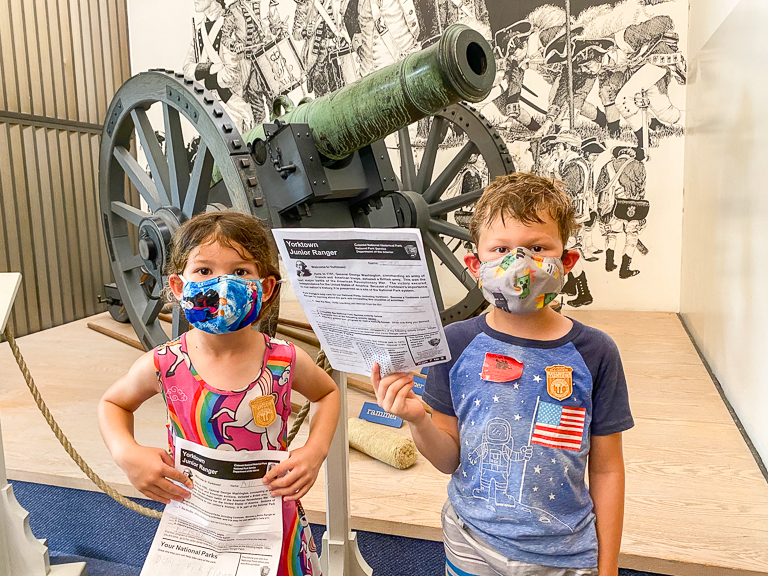 And here's a closer look at that badge.
Along with the tour of the town, there is also a driving tour of the grounds. There's a free audio tour you can play as you drive, but after the first 4-5 stops, and just seeing mostly fields where things happened, we decided to skip the rest and head to the next sites of the day. Historic Jamestowne! 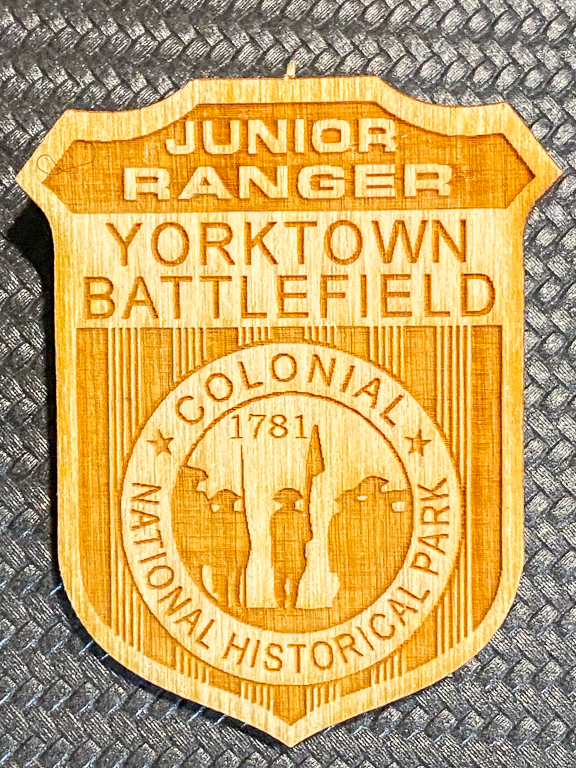