Today we're taking one more trip to the Gettysburg Battlefield. We saw the Battlefield, but there's one more place that has history in this location. Abraham Lincoln was here and gave his famous Gettysburg Address when the cemetery was dedicated on November 19, 1863. 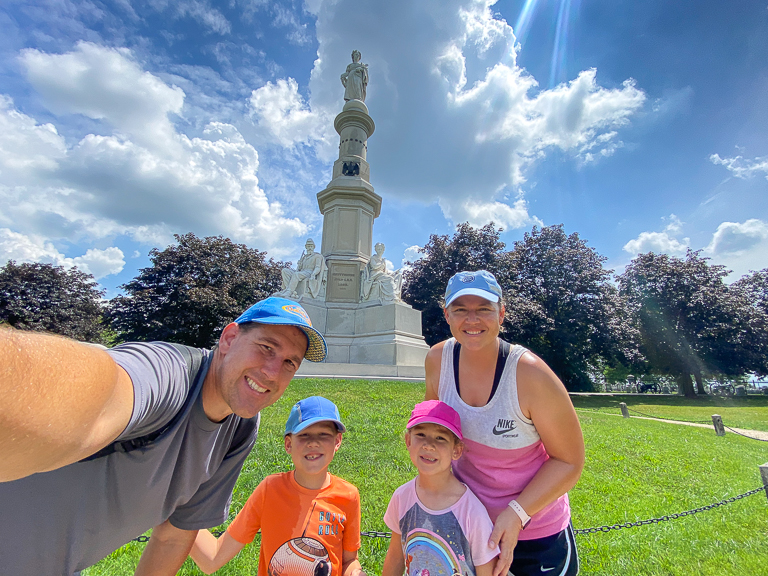 We had hoped to do some biking around the battlefield as well. I parked in the furthest lot from the visitor's center and we walked over. After talking to the ranger's there, they showed us that there's only a half mile section of biking trail here. There's tons of walking trails but bikes are not allowed. That means we'll get some walking miles in! 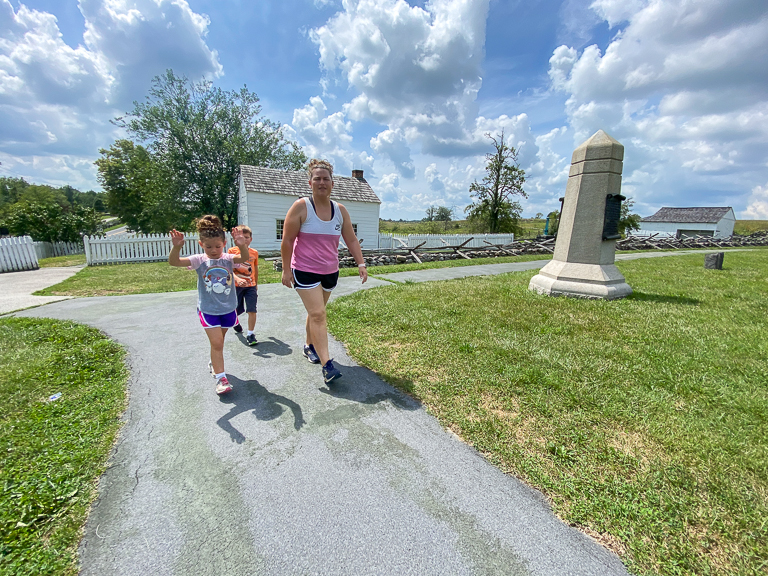 There's quite a few apple trees along this trail. I don't think we're allowed to pick any of them though. And the ones on the ground don't look too good.
There's signs around that say there's no relic hunting and no metal detectors of any kind. 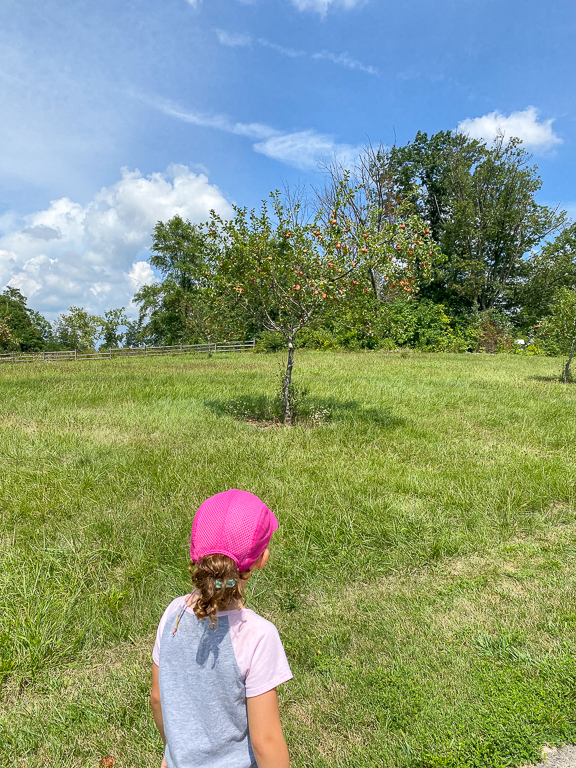 A large tribute to the soldiers from Maryland who fought here. 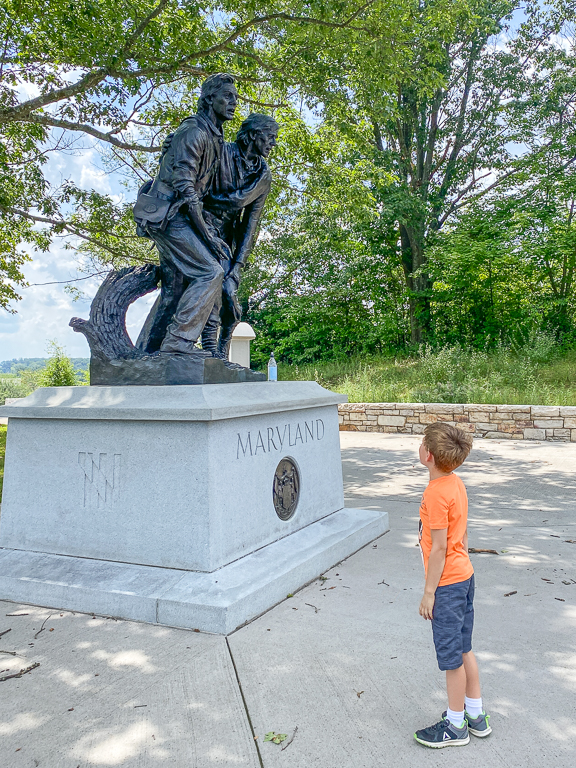 There's over 3500 soldiers buried here, all around the Soldiers' National Monument. They are buried in groups by the state they were from. 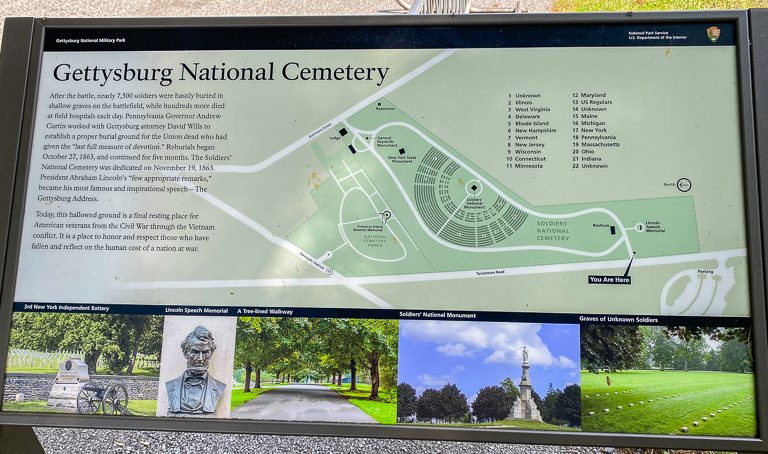 While we're here, we're to treat the area with respect. 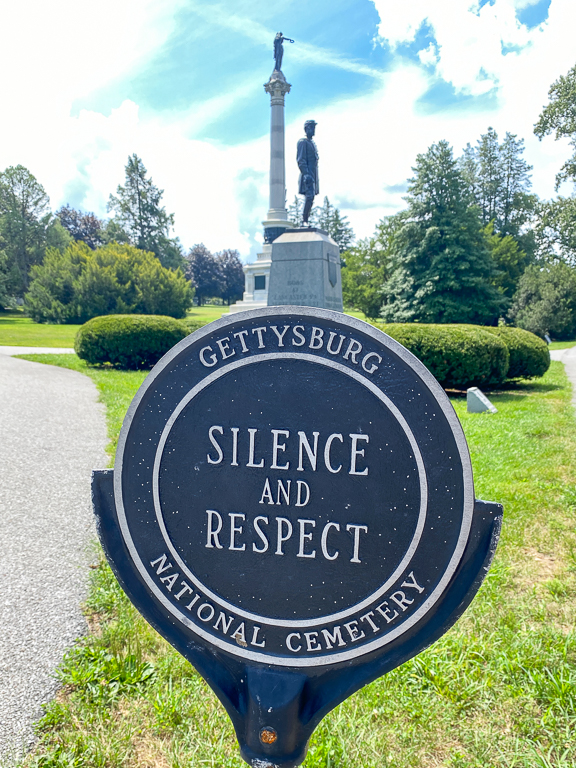 It's a misdemeanor to destroy or deface a gravestone or remove any tree, shrub, or plants here. 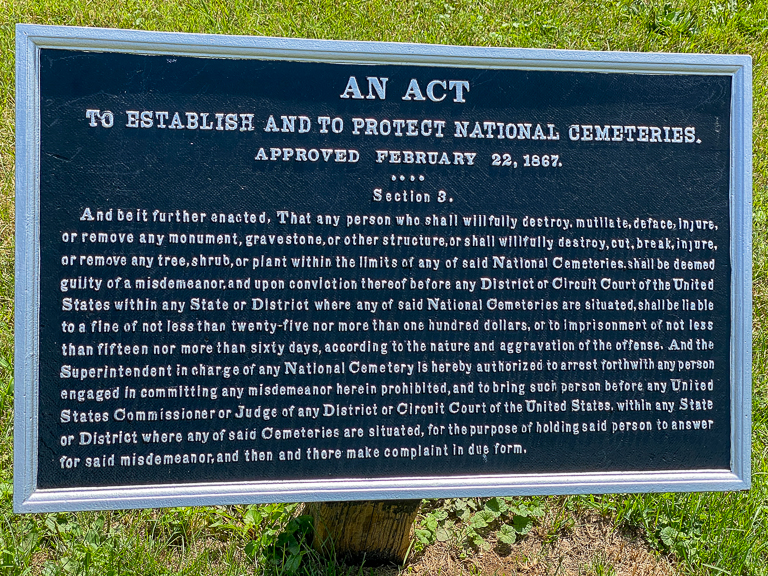 General John Reynolds was the highest ranking soldier killed at Gettysburg. While General Buford and his cavalry were holding off Confederate forces on Day 1, he sent off a message for reinforcements. Reynolds arrived with his troops. As Reynolds yelled out "Forward men forward for God's sake and drive those fellows out of those woods." he was struck by a bullet and died instantly. 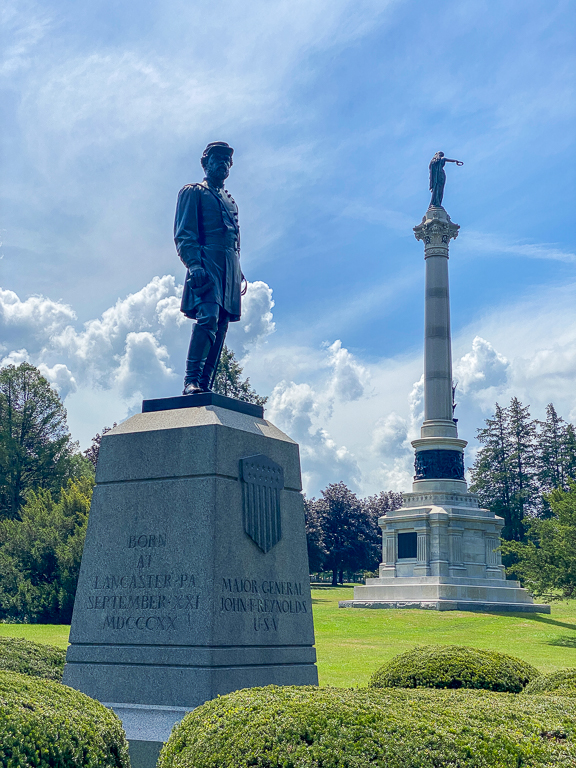 Along with the cemetery, there's so many different trees here. And they're labeled, which is great for my little botanists! 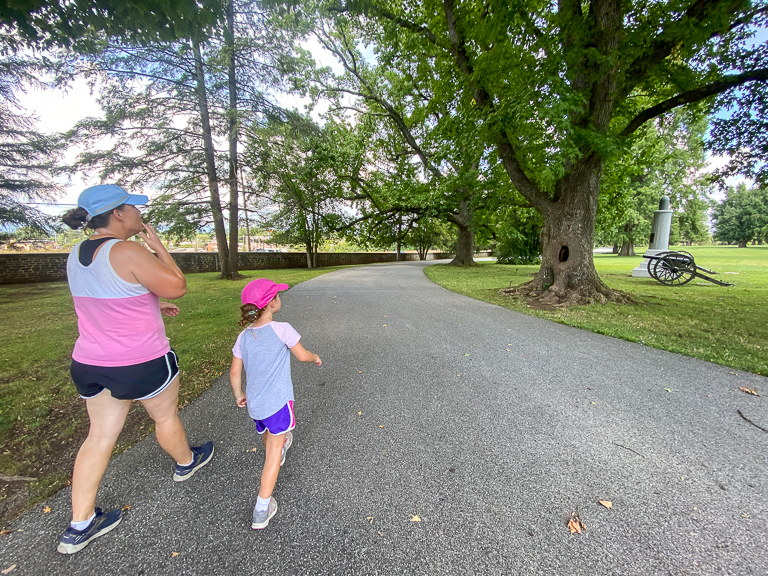 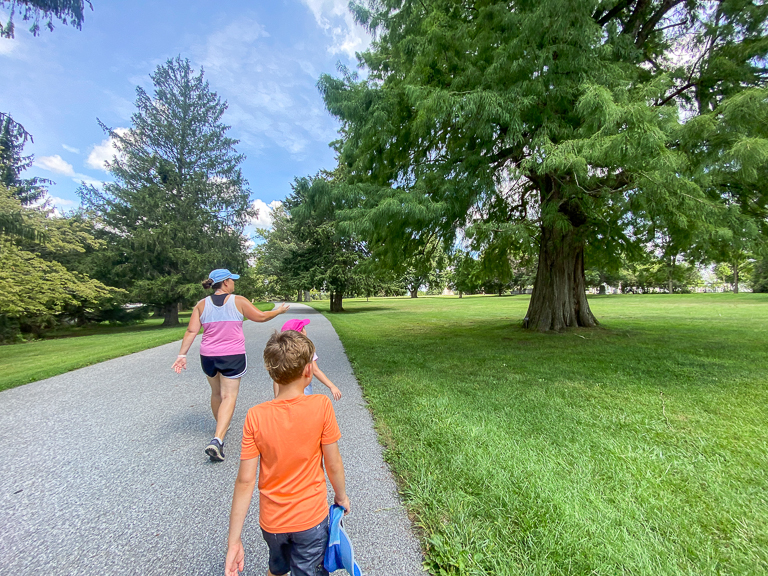 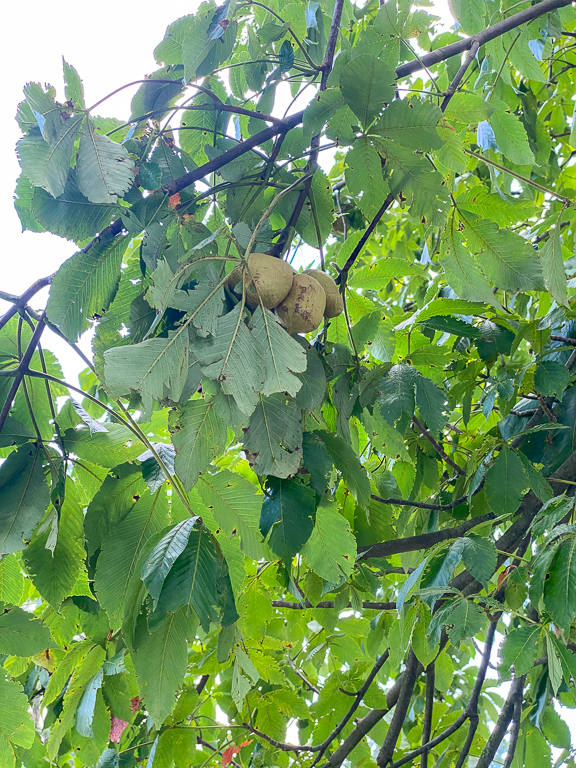 These Norway Maples look like they would be right at home at the Haunted Mansion. They look purple from afar, and green up close and underneath. 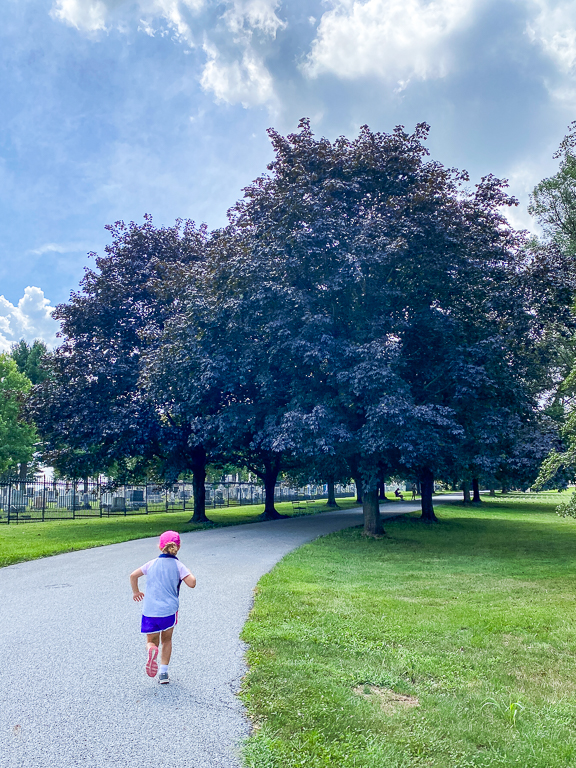 Alli really got into checking out the different tree types. After a while we tried to say what it was before reading the tag. 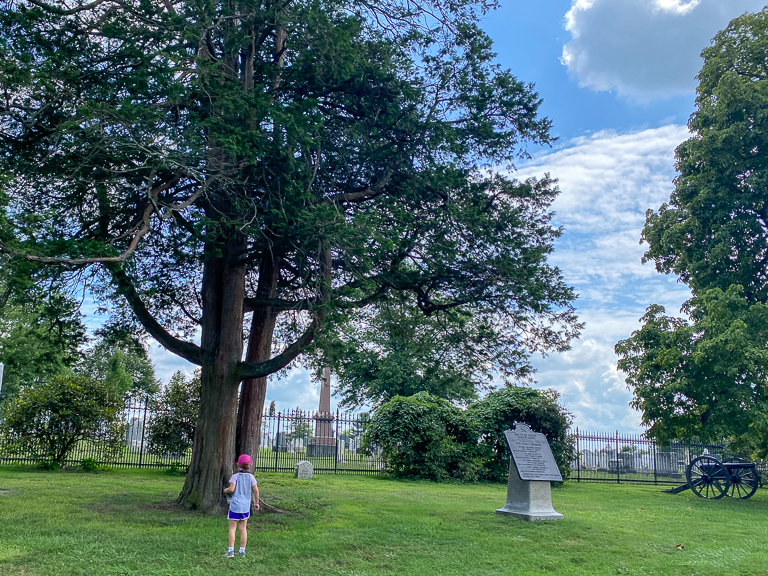 A Hemlock tree. We did check to make sure that this Hemlock is different than the poisonous Hemlock which is a smaller plant that is part of the carrot family. 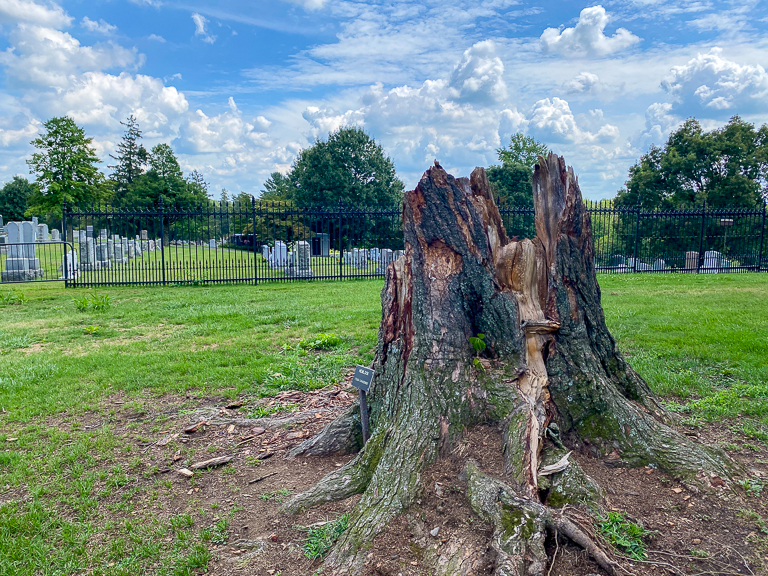 Back at the entrance to the cemetery is the Lincoln Speech Memorial. 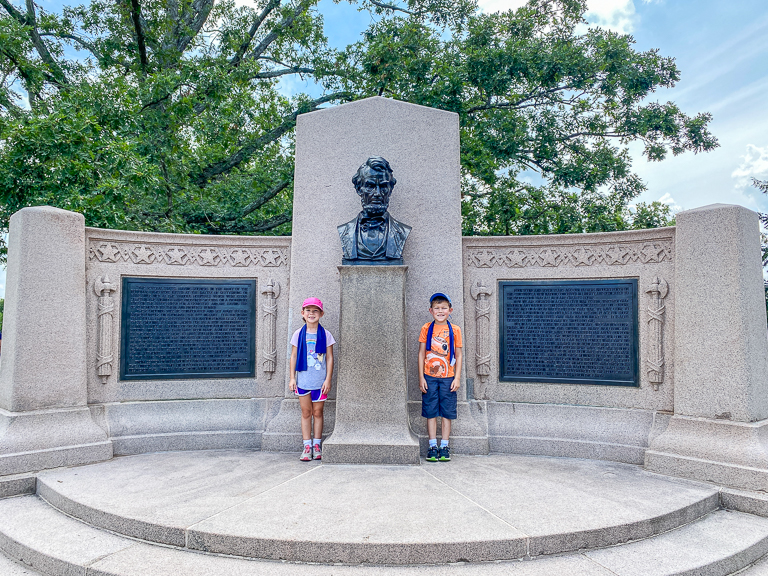 Though the actual location of the speech was a few hundred yards down the pathway. 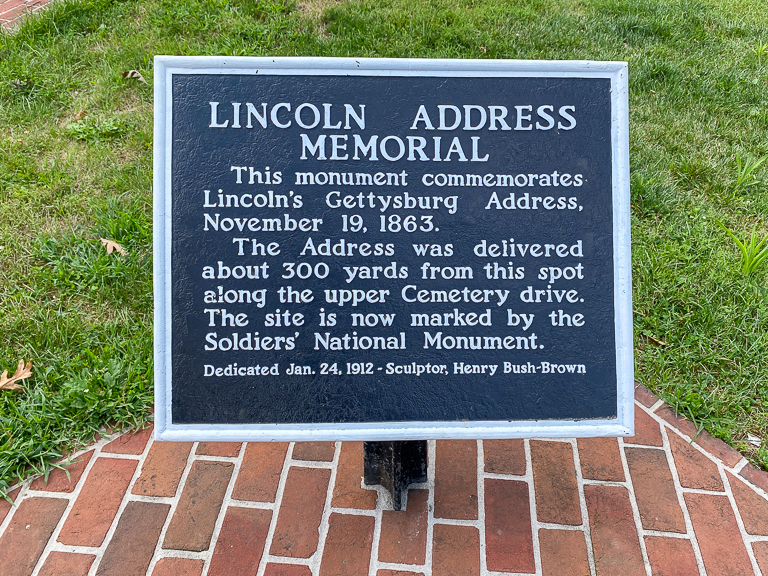 On November 19th, at the dedication of the cemetery, President Lincoln was not the main speaker. A well known orator named Edward Everett gave a 2 hour speech, and then Lincoln rose to give "a few appropriate remarks." Just ten sentences. Two minutes. It surprised everyone that he was completed so quickly, and there are no photographs of him giving it. It received light applause at the time, but has become known as one of the greatest speeches in American History. 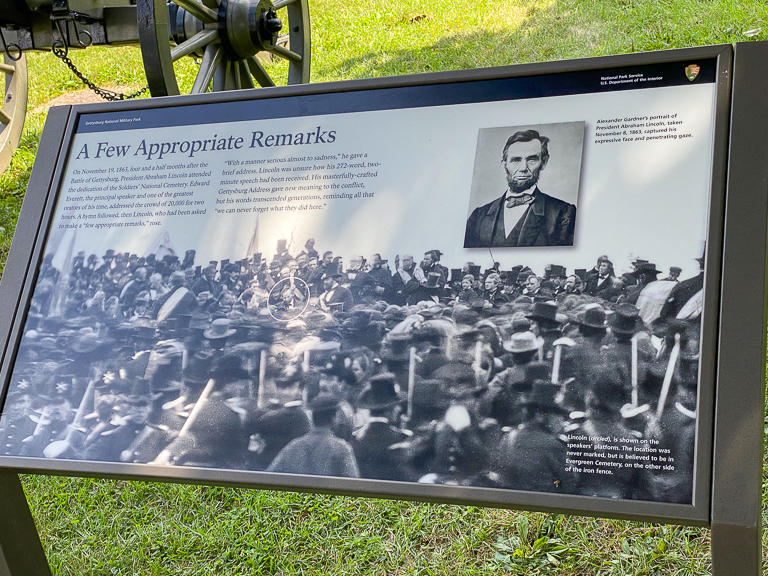 Four score and seven years ago our fathers brought forth on this continent, a new nation, conceived in liberty, and dedicated to the proposition that all men are created equal.
Now we are engaged in a great civil war, testing whether that nation, or any nation so conceived and so dedicated, can long endure. We are met on a great battle-field of that war. We have come to dedicate a portion of that field, as a final resting place for those who here gave their lives that that nation might live. It is altogether fitting and proper that we should do this.
But, in a larger sense, we can not dedicate—we can not consecrate—we can not hallow—this ground. The brave men, living and dead—who struggled here, have consecrated it far above our poor power to add or detract. The world will little note, nor long remember what we say here, but it can never forget what they did here. It is for us the living, rather, to be dedicated here to the unfinished work which they who fought here have thus far so nobly advanced. It is rather for us to be here dedicated to the great task remaining before us—that from these honored dead we take increased devotion to that cause for which they gave the last full measure of devotion—that we here highly resolve that these dead shall not have died in vain—that this nation, under God, shall have a new birth of freedom—and that government of the people, by the people, for the people, shall not perish from the earth. - Abraham Lincoln, November 19, 1863. 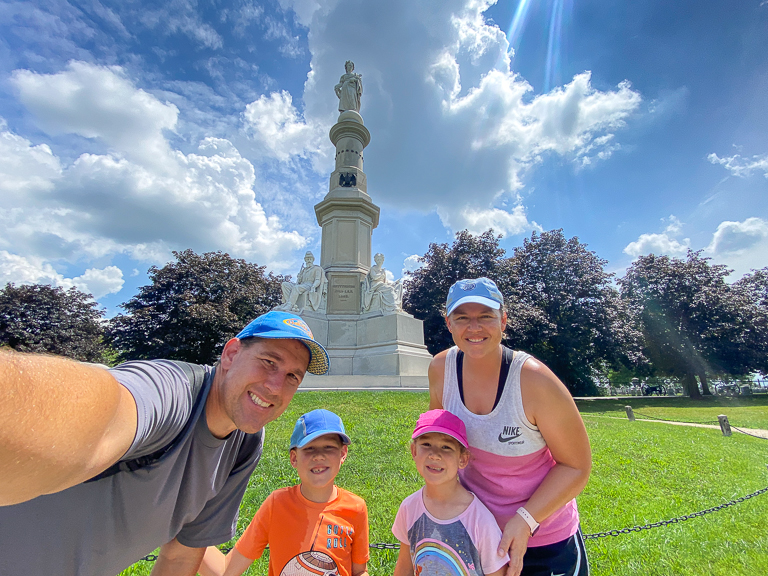 The short speech is inscribed on a plaque behind the Soldiers' Monument. 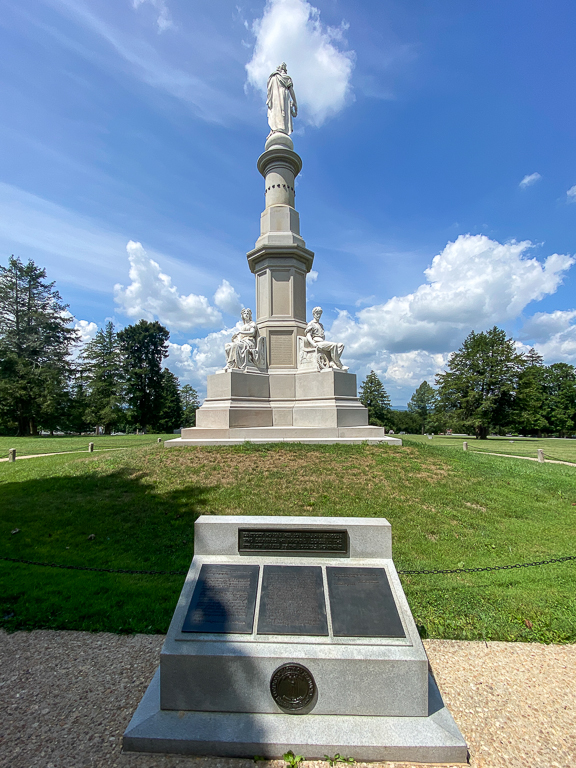 History was made here. Now any time I hear that speech, I'll think of this location where it was given, and understand the gravity and weight behind those words just a little bit better. 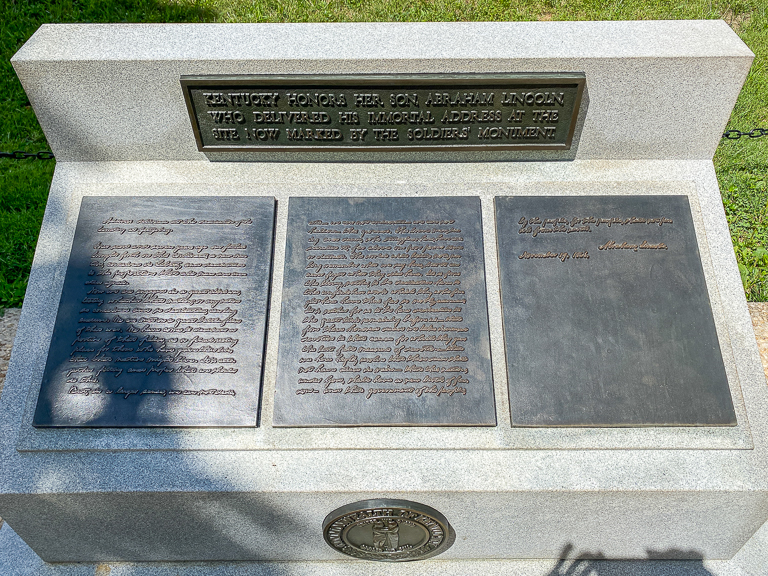