It was such a good time visiting the Outer Banks a few days ago, we decided to drive the 2 hours back to spend the day again. There's a lot to do here, so let's get started! 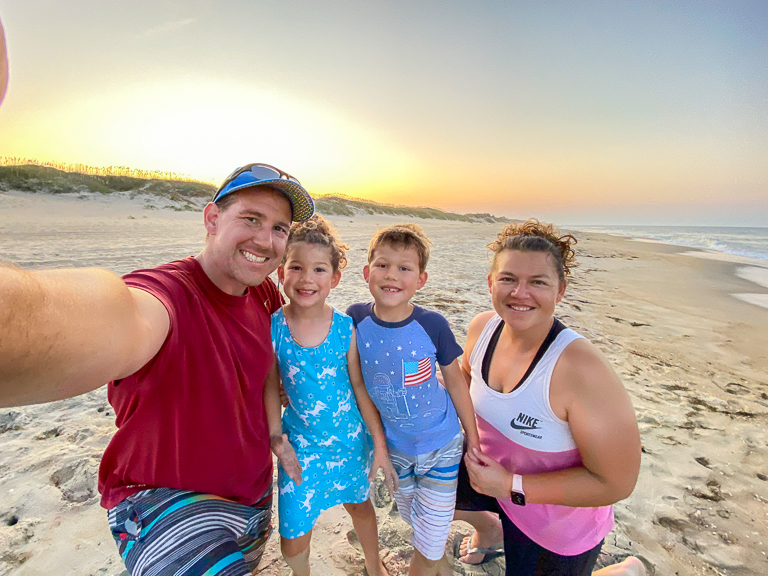 The kids loved flying kites at the Wright Brothers Memorial the other day so Theresa and I told them we'd buy them each a kite. Kitty Hawk Kites has 15 locations up and down the Outer Banks, but the one right next to Kitty Hawk is the largest. 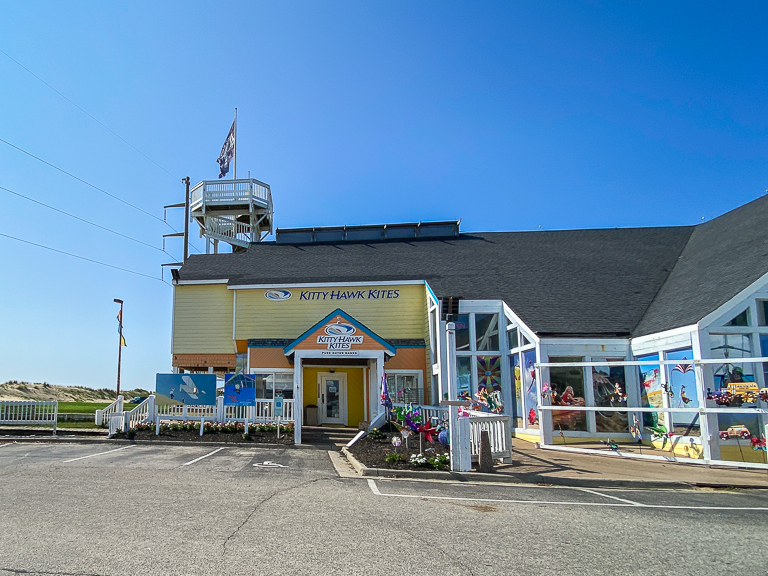 Inside they've got a whole lot of kites! Three or four rooms filled with kites! 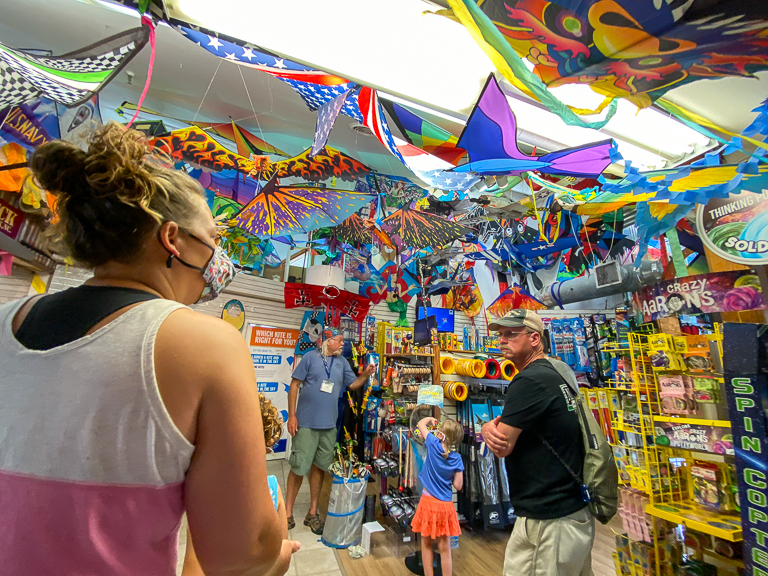 We ended up going with a Premier Large Easy Flyer. I was hoping to find something that was the same brand as the kites we used at the Wright Memorial (Skydog Kites) since surely they get beat up a bit, but the kids wanted other designs. 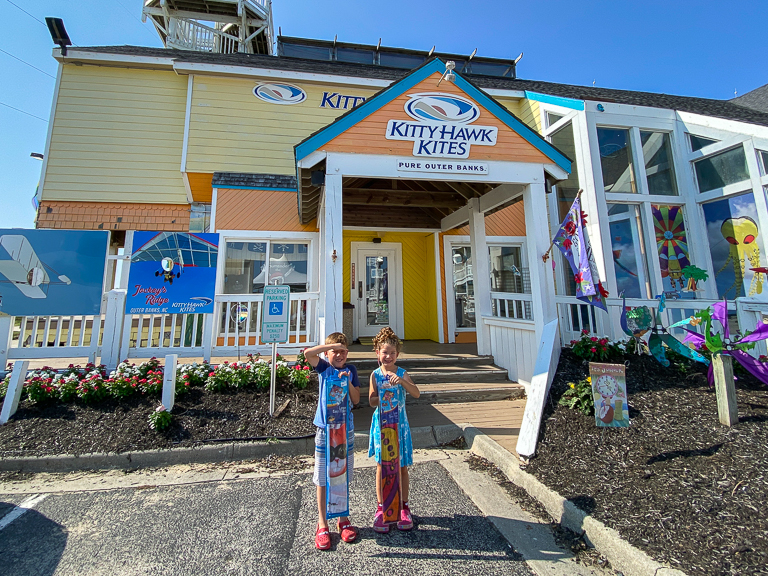 For dinner, we're going to have a picnic on the beach! I'd had thoughts about going to some other beach, but we enjoyed Coquina Beach right across from the Bodie Lighthouse so much we decided to go back there. It's also supposed to be a great Dark Sky spot which will be great for later tonight. 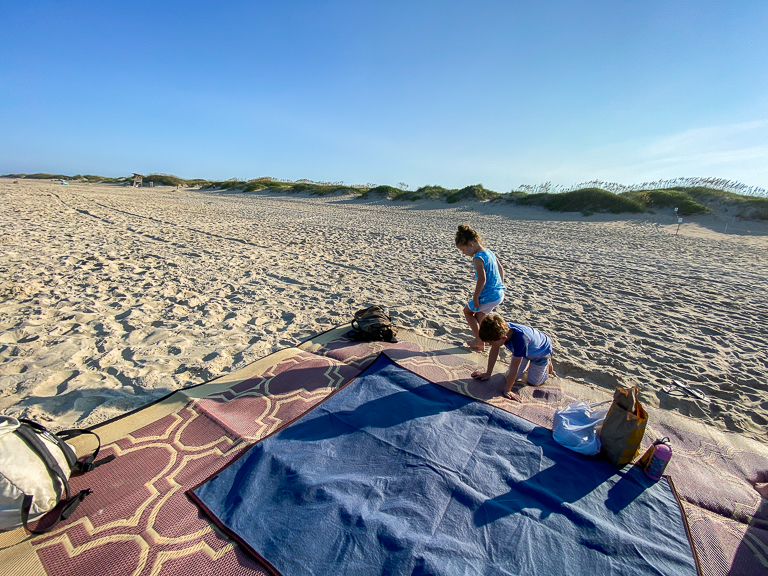 The kids were excited to hear that we'd be having McDonald's for dinner. They sing "Old McDonald's had a farm" whenever we go by it. 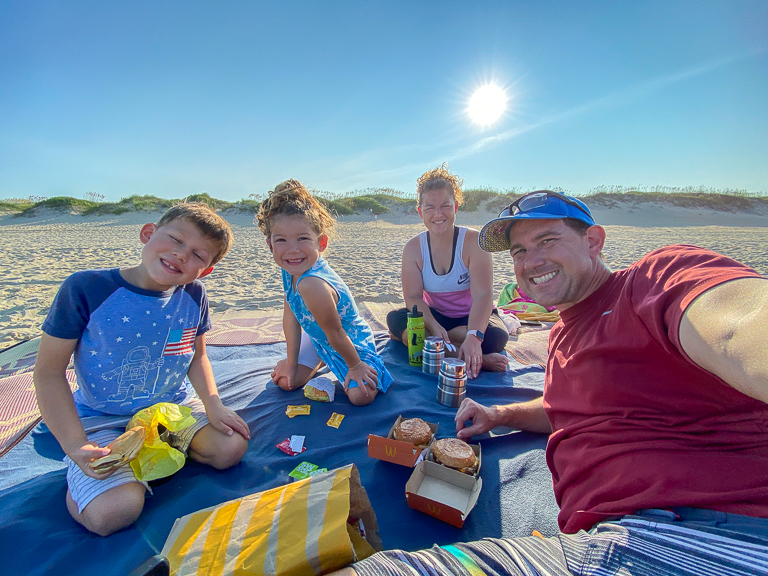 Ian and Alli noticed movement in the sand. What is that? 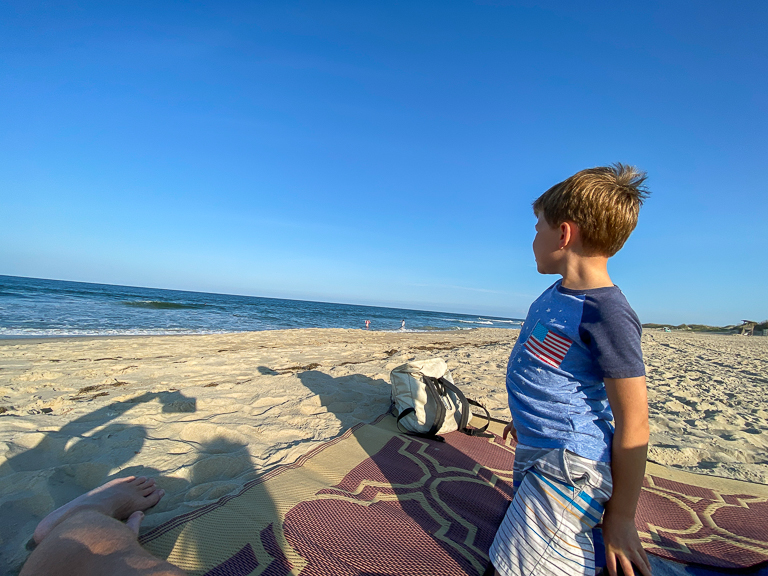 It's a ghost crab! There's lots of them if you slow down and watch the sand. 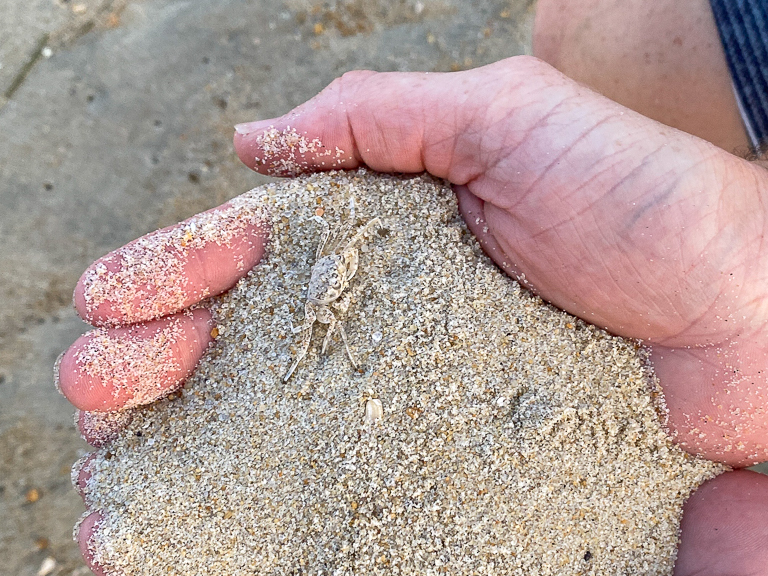 And they're quick, but not as quick as me. 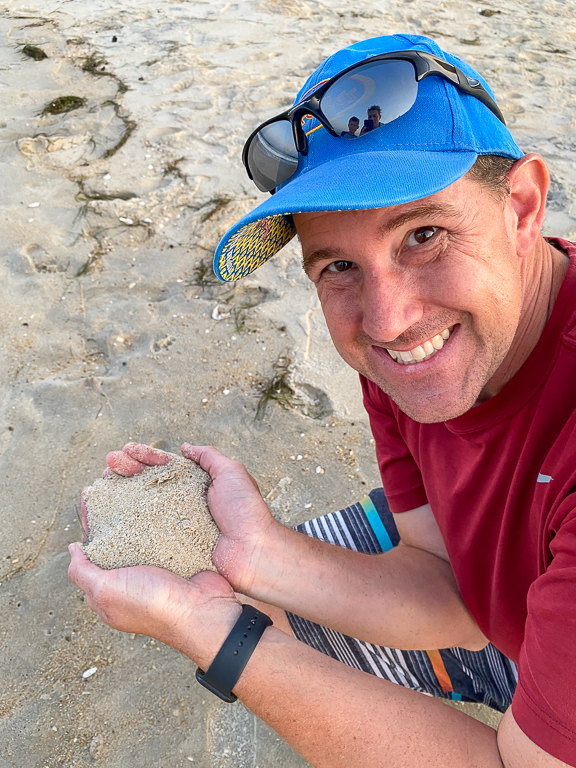 The kids saw the birds running in the sand and said "Piper!" They remember the Pixar short and they love it. 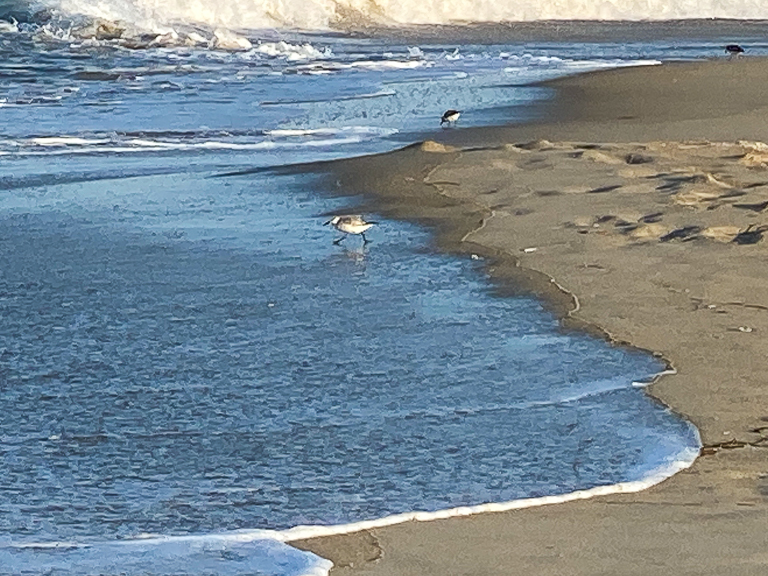 Nearby on the sandbanks, it looks like a turtle has made her way up on to the beach and laid a clutch of eggs. Rangers have cordoned off the area to make sure they have the best chance at hatching.

The kids had a fun time collecting shells last time, and they were really looking forward to doing it again today. We've got even more time to look for them now! 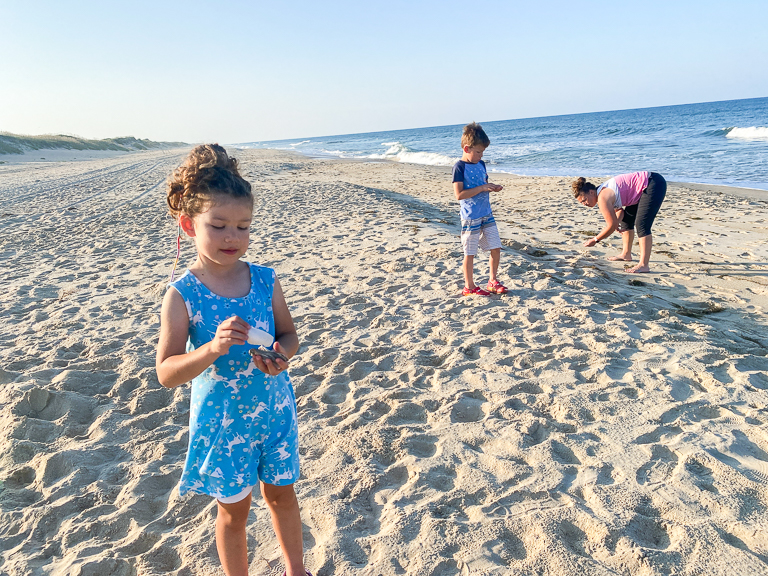 There's a lot of large shells. 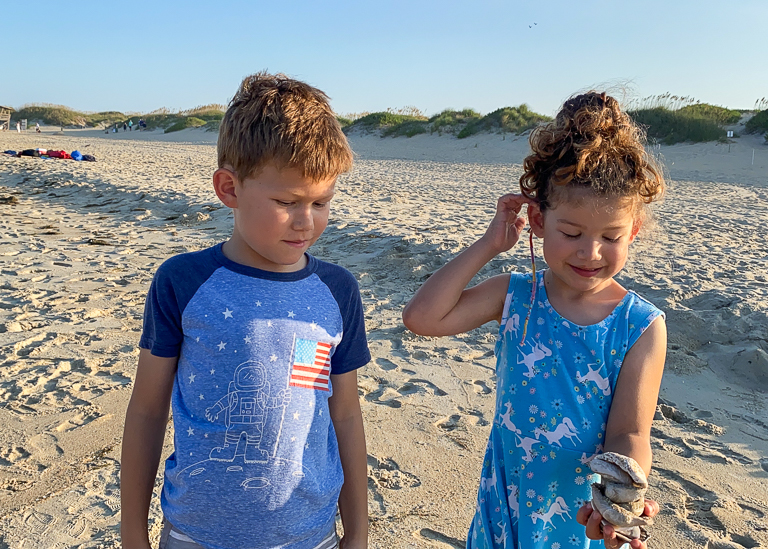 But Ian is on the lookout for smaller shells with holes already in them. He's got some plans to make presents for people. 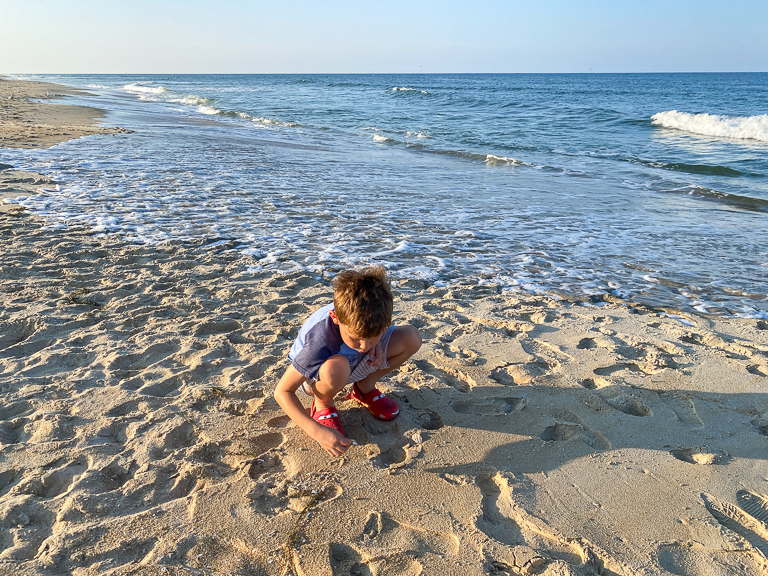 While walking the beach we found some obviously abandoned beach toys. It's nearing high-tide and if we don't take them, they'll be floating in the ocean before too long.
Alli - Daddy, you're pretty ingenious.
Why?
Alli - Cause you thought of cleaning off the shells like this. 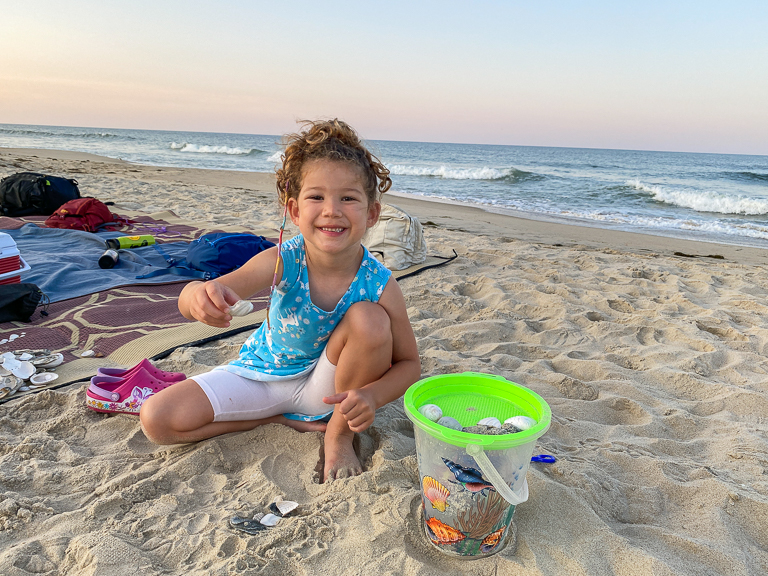 Alli cleaned the sand off the shells while Theresa and Ian picked through all the shells we've found so far to make sure they have enough for his presents. Just a few short. We'll have to go search for a few more. 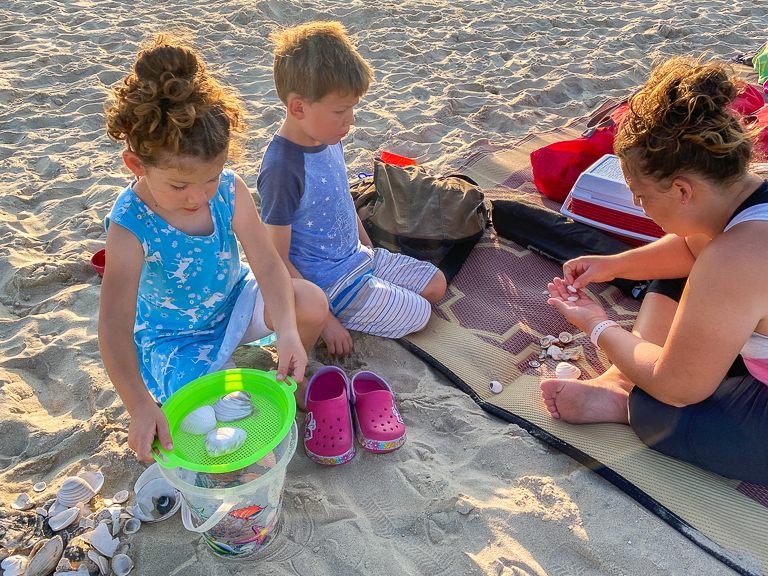 The beach has been wonderful! It's a Monday and it's pretty empty.

Let's fly a kite! Ian's choice is the Catstronaut. He loves Space and his cousin loves cats. He's hoping his cousin will fly it with him when we meet back up again. 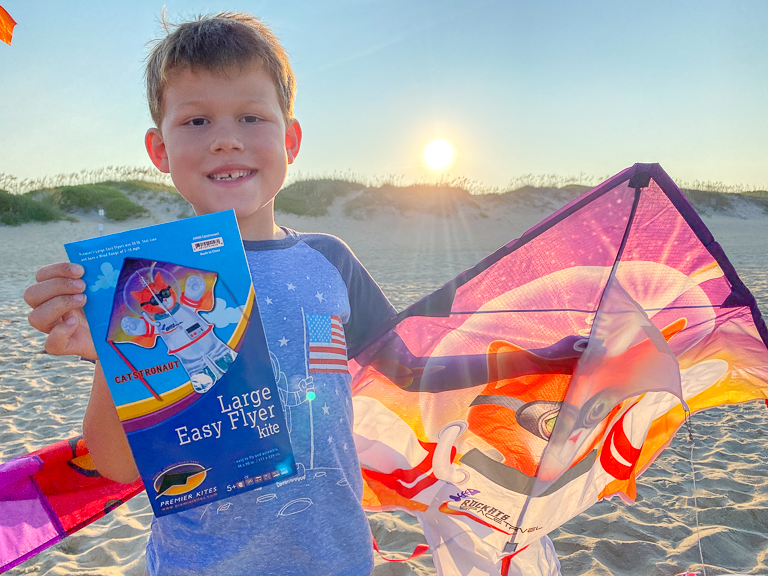 Alli chose a kite called Warm Orbit that has lots of pinks and purples. No surprise there. 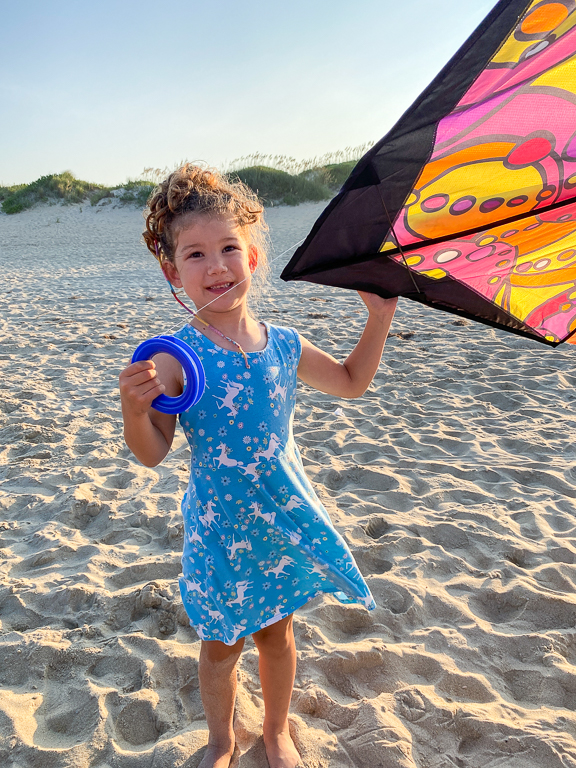 These kites are easy to fly! In no time at all they had both of them up in the air and flying high! 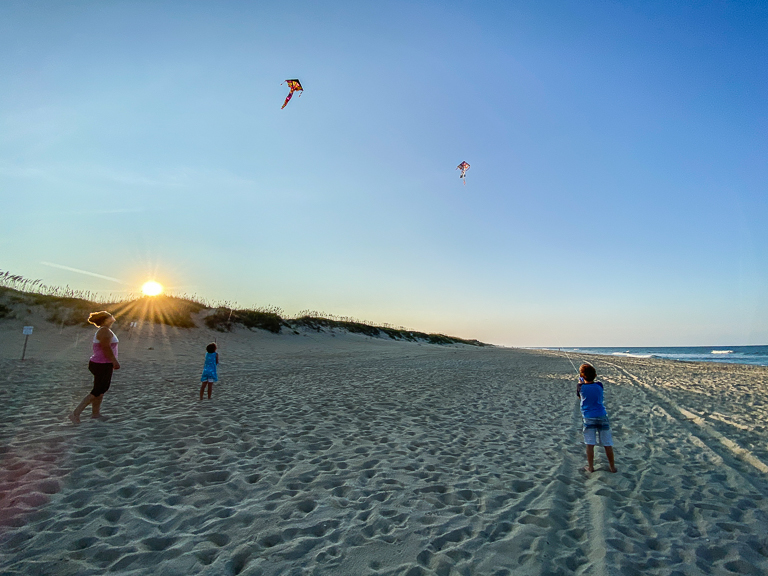 As the sun started to set, Theresa and the kids went out looking for the last of their shells. 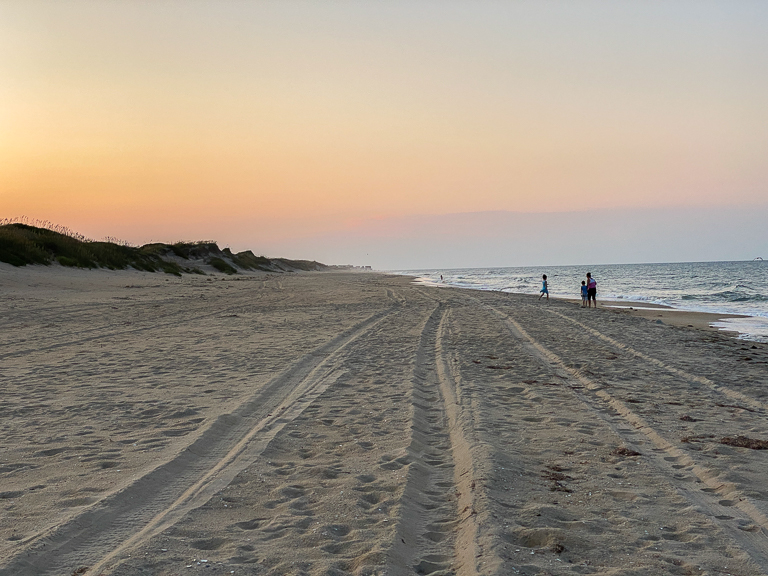 The reason we were wanting to find a dark sky is because we're getting close to the peak of the Perseids Meteor Shower! Every year in August, the earth passes through debris from the comet Swift-Tuttle. The kids have never seen a meteor shower and they were looking forward to the light show tonight.
I set up beach chairs and the kids joined Theresa and I as we looked up at the stars.
While getting things set up I felt a few things biting my legs. I looked down and found 4 mosquitos enjoying a tasty meal of me. I swatted them and left streaks of blood on my leg. Those annoying bugs even found us out in the middle of the sand. Out came the bug spray, long sleeve shirts, and blankets. 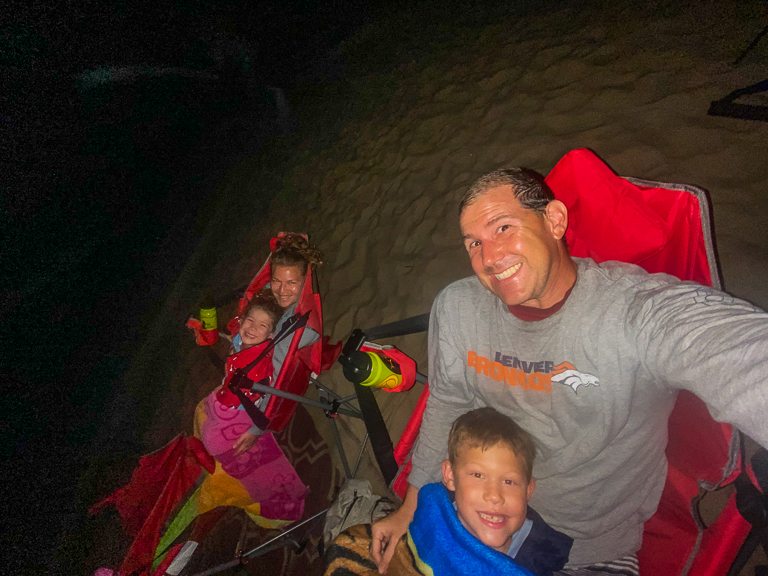 The Perseids emanate mostly from the constellation Perseus. I pulled out my Night Sky app, located the direction and pointed my camera that way.
Well... it's dark here, but it's a glowing city over there. I'm going to have to rethink my camera positioning. 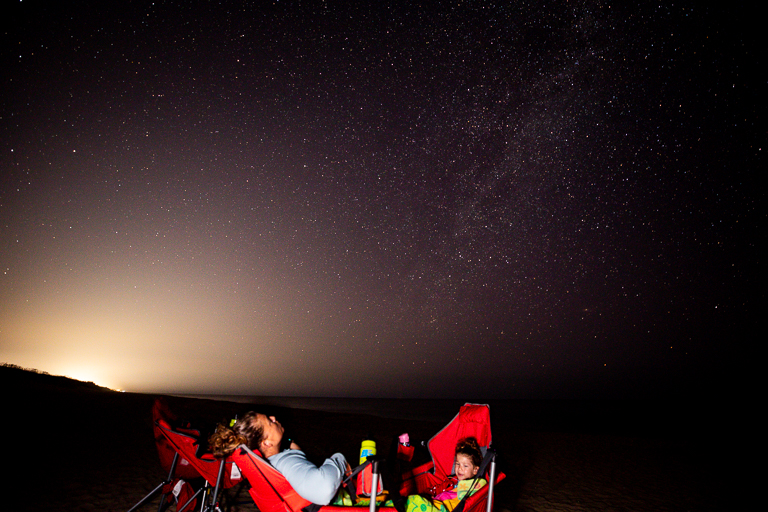 I should have used a fish-eye lens to capture more of the sky. This 16mm lens is wide, but not quite wide enough to capture that "whole sky" I wanted. I caught a few meteors on camera but we saw a whole lot more. 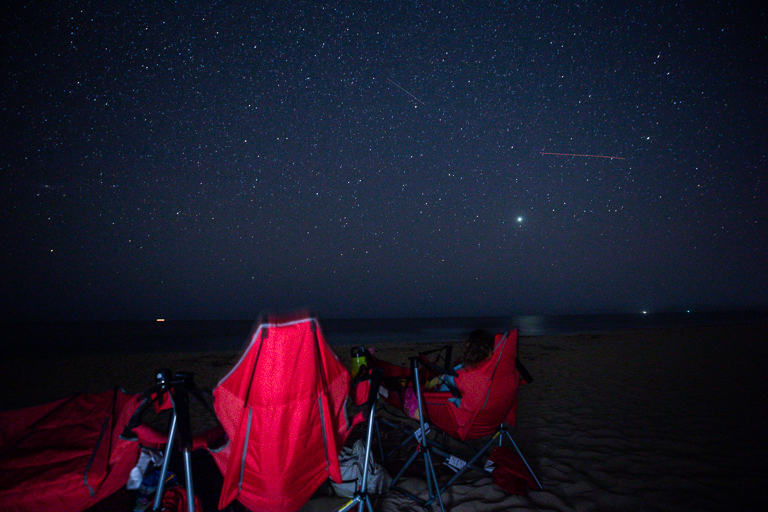 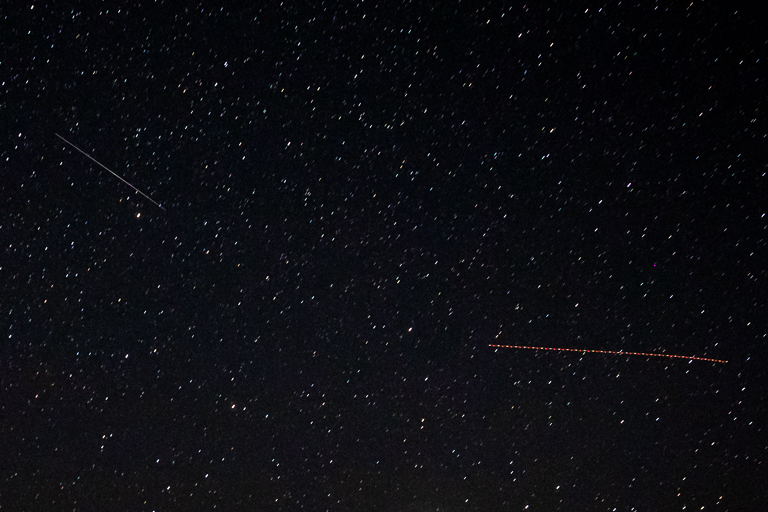 The kids did get to see the Milky Way. It's much more visible after a 30 second exposure, but you can make out the cloudy parts of the sky with your naked eye when it's dark. 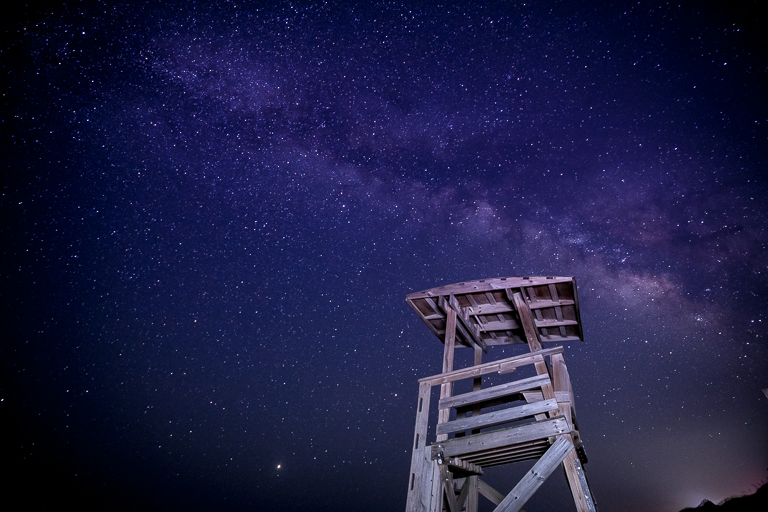 There were times when we wouldn't see a meteor for a few minutes, but it was awesome when all four of us happened to be looking at the same section of sky and all saw the flash and streak of the same meteor.
It was a running joke that I had the worst luck with seeing meteors. I look down to check the time, everyone OOHS at a meteor. I'm looking at one part of the sky and I hear three AAHHs coming from them who were looking somewhere else. Still, everyone had a fun time and there were meteors often enough to keep things from getting boring. The sun went down and it was dark enough to see meteors around 8:45pm. We spent over 2 hours there! It was great to sit there as a family, with the kids on our laps, under a blanket, and watching the skies. 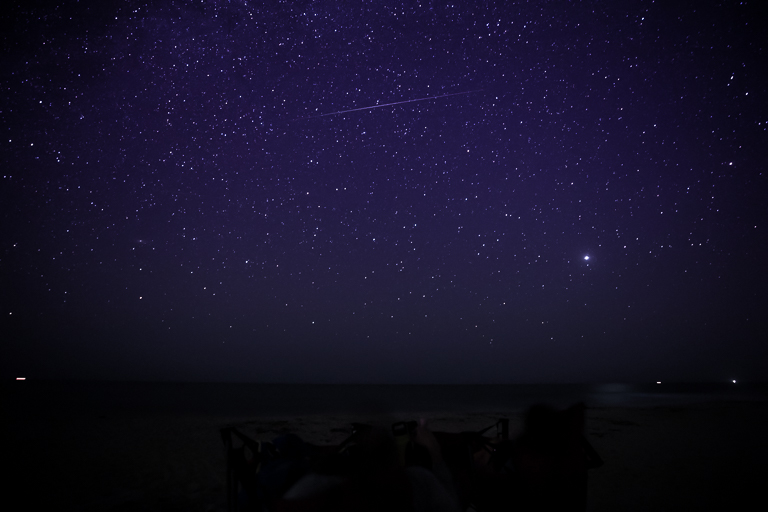 After packing the truck, it was a 2 hour drive to get back to our campground. My three travel buddies all fell asleep on the drive back, and we wouldn't make it home until 1:30am. (Theresa took these photos before falling asleep herself). And tomorrow is a travel day, so we'll be getting the RV all packed up and ready to move. It's going to be an early morning, but today was worth it. 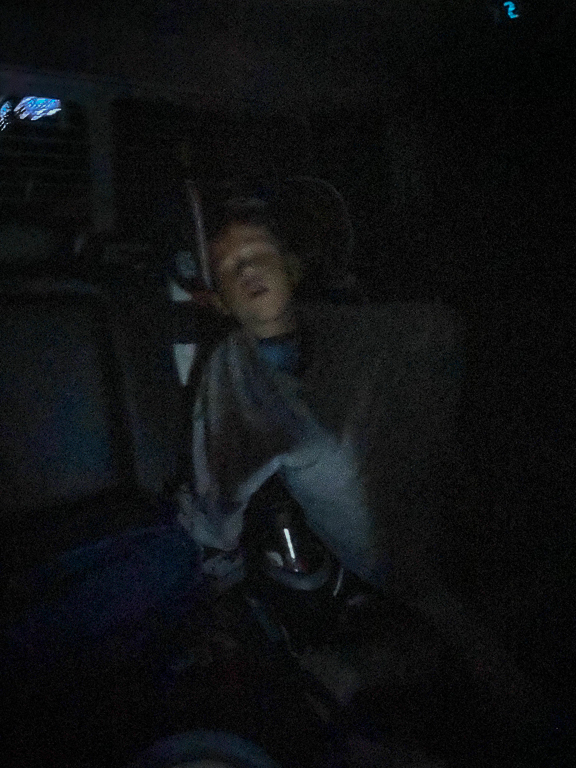 The kids' thoughts.
Ian - I like the Outer Banks. At the beach me and Alli flew a kite. The longest meteor was two seconds long. At eleven o,clock we left. It was a fun day.
Alli - We found se shels. 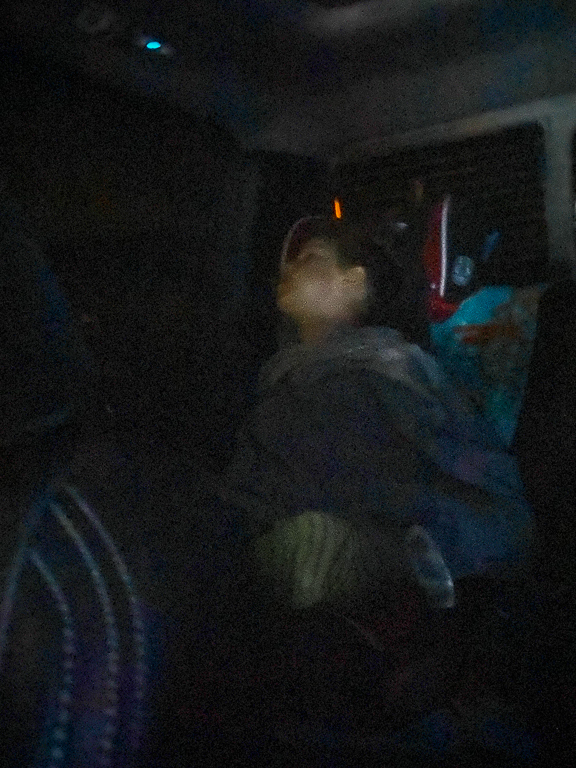 I mentioned the mosquitos before. I think I got lucky. Theresa and I both get bitten, but only one of us reacts to the bites. I don't think they're all from the Outer Banks, but she does seem to collect bites more than most. 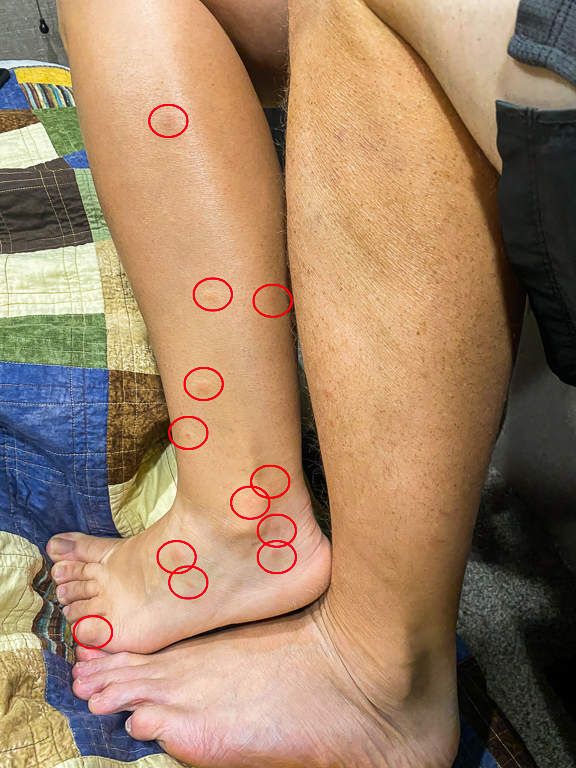