We're around Gettysburg for a few days, and while we were out doing our weekly grocery shopping, I noticed a sign for the Utz Factory. Do they make those near here? Yes they do! But do they have factory tours? Yes! 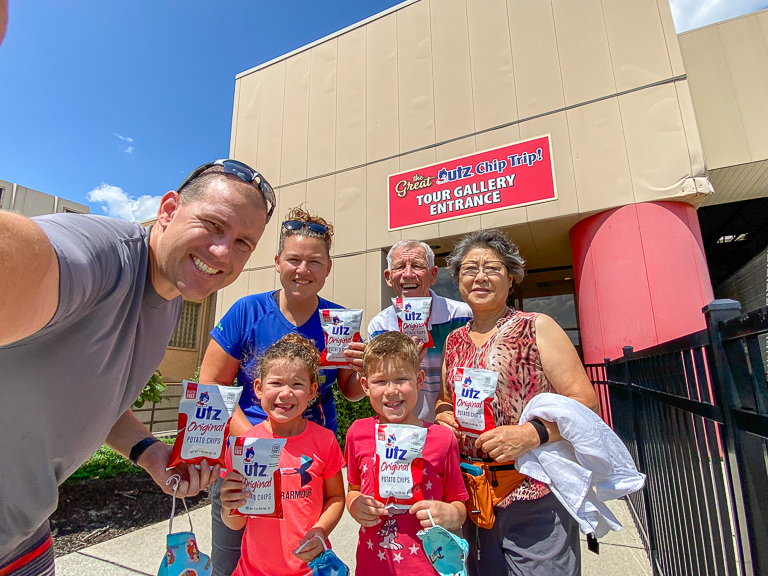 The Utz factory is pretty large, and we first parked in the Visitors section of the Employee lot before we spoke with someone and figured out where to go for the Factory Tour. As soon as I parked the car and opened the door, I could smell fried potatoes in the air. This place definitely makes potato chips. 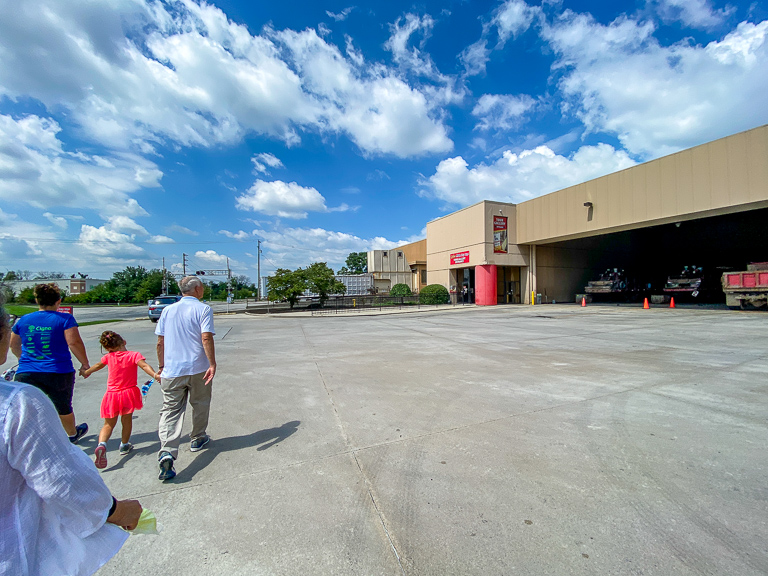 There's the entrance to the Tour Gallery! 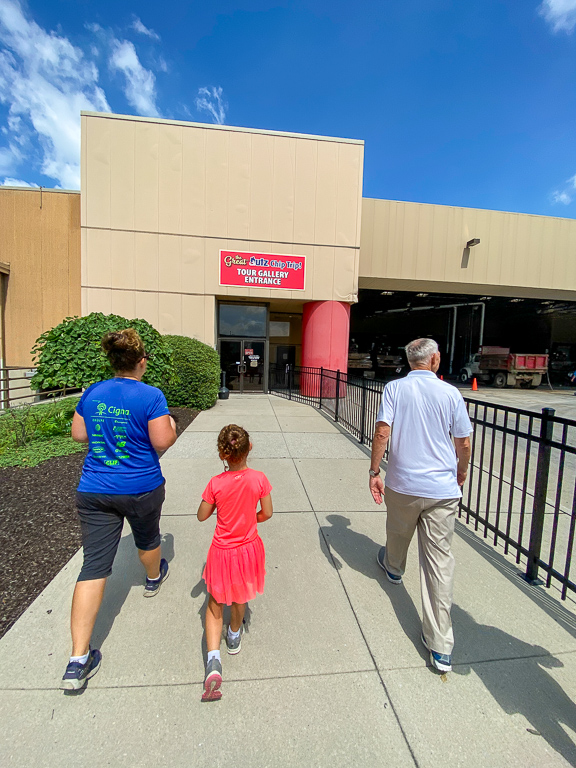 We'll get to see the whole process of how they make potato chips! 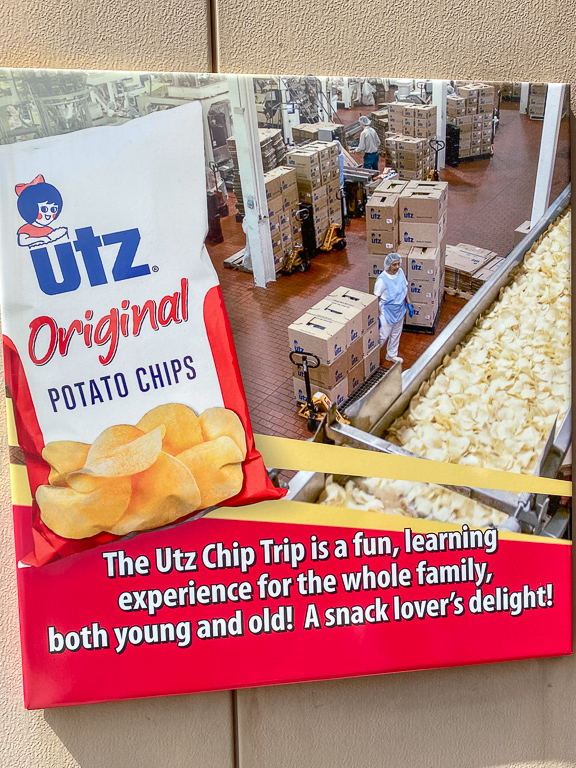 Inside the door we see some of the old fashioned potato chip storage tins, a peeler, and a slicer. 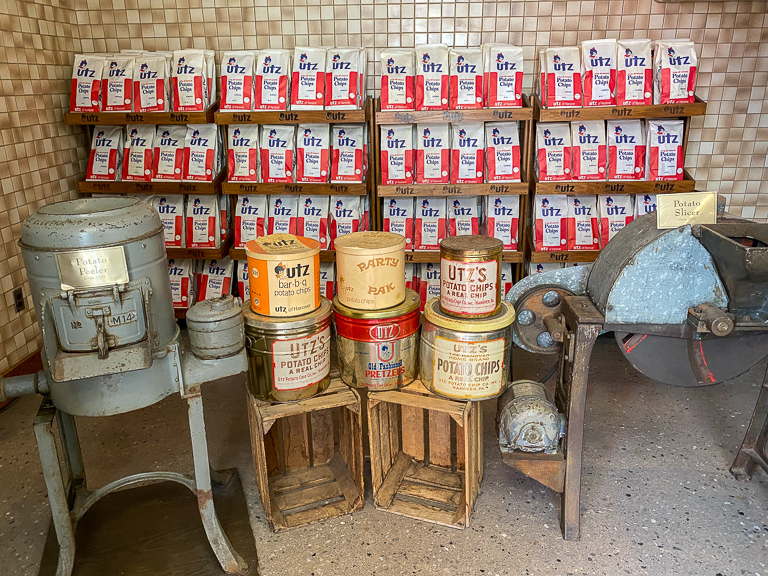 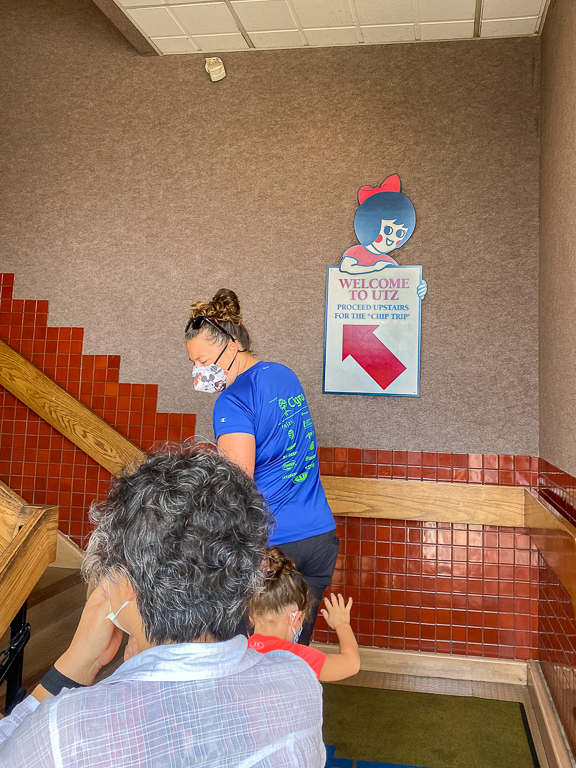 Up the stairs we see photos of Bill and Salie Utz. 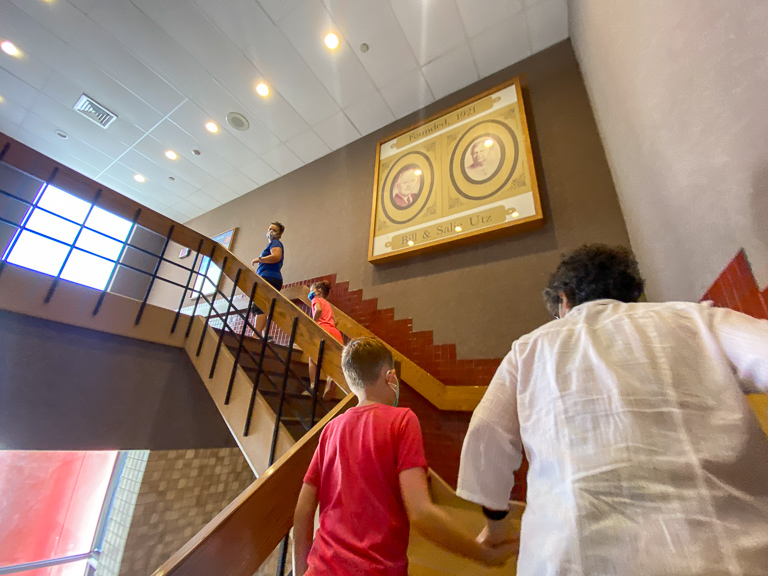 In 1921, Bill and Salie began making potato chips by hand out of their kitchen. Salie would make them in the kitchen, and Bill would sell them to local grocery stores. At the time, they could make 50 pounds of chips in an hour!
And seeing as this is 2021, it's the 100th Birthday of Utz!
One question I had was whether the name Utz was pronounced Uh-tz, Ütz, or Oo-tz. Speaking the lady at the information desk, she said either is acceptable. The local people who are Pennsylvania Dutch pronounce it Ütz but other people around the country pronounce it Uh-tz. 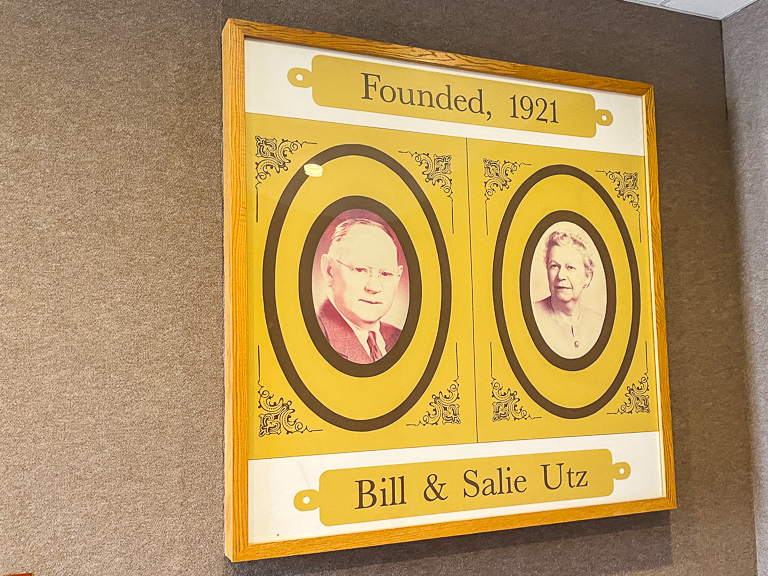 The lobby has a history of the Utz family. They purchased a delivery vehicle in 1930 and because demand was so great, they built a chip making factory behind their house in 1931. They had one of the first automatic potato chip cookers in 1936 which increased production by 600%! 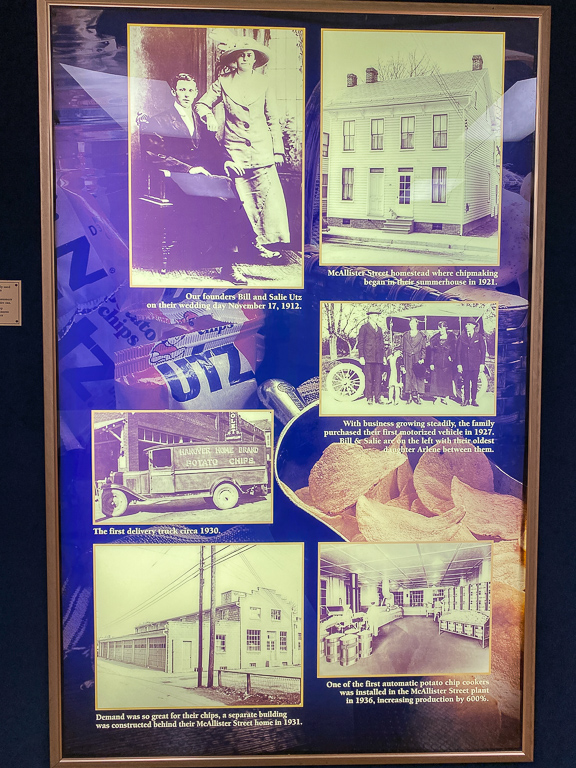 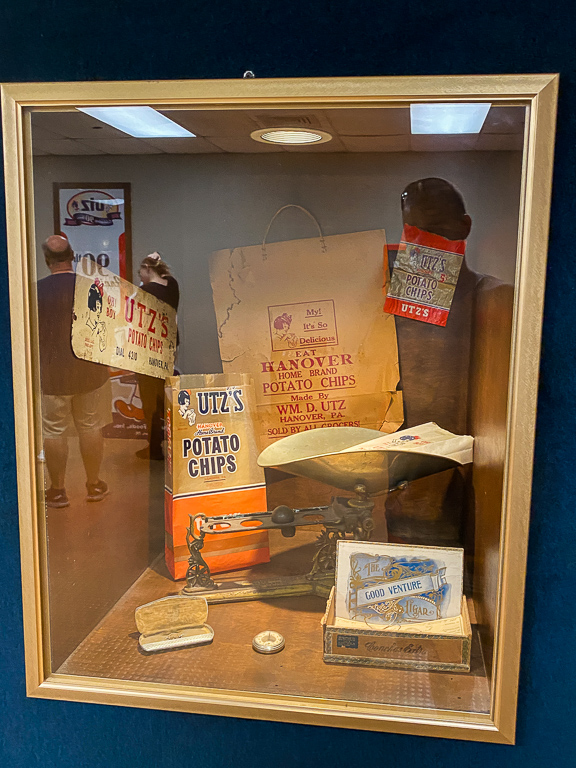 The chips were sent to markets in these large cans, where they would be weighed out for customers. Customers liked them so much that they began buying them by the entire cannister! 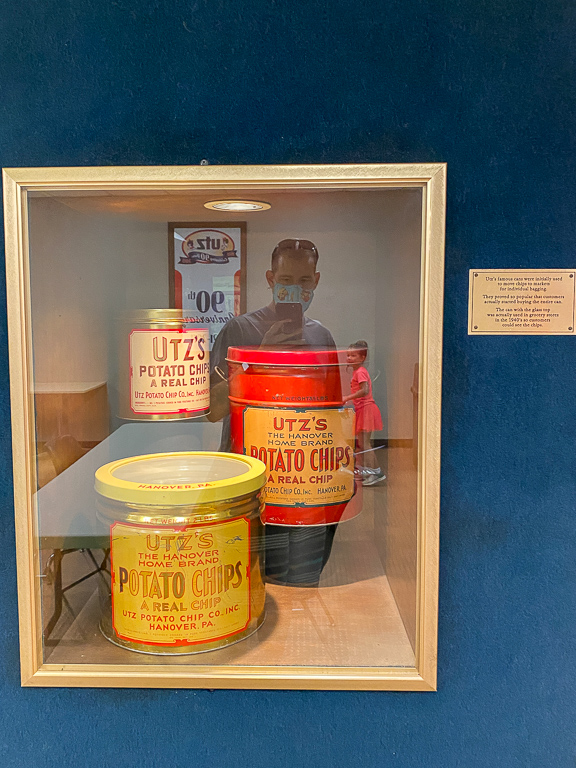 In 1949 a new factory was built which increased capacity again. They were so popular they had 80 delivery trucks taking chips to all the stores.
In the 1970s they purchased even more properties, including the one at High Street where we're visiting today. 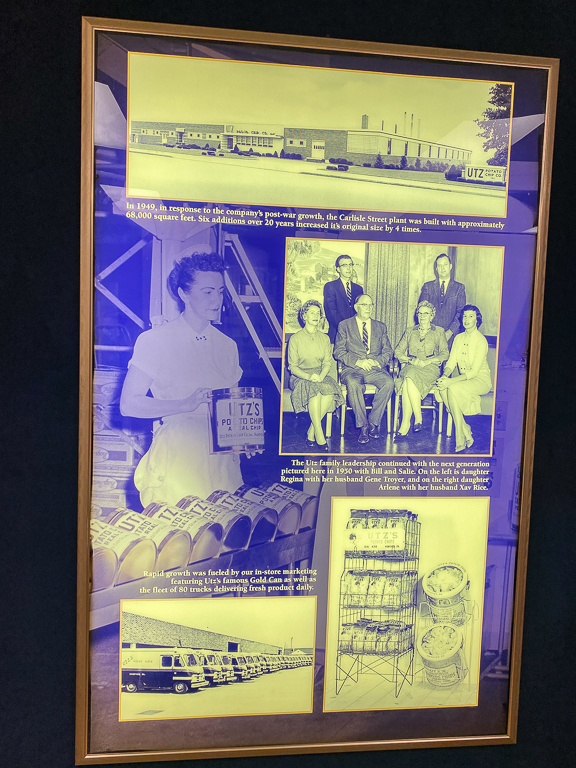 Utz has grown bigger and bigger, even making their way to the New York Stock Exchange. 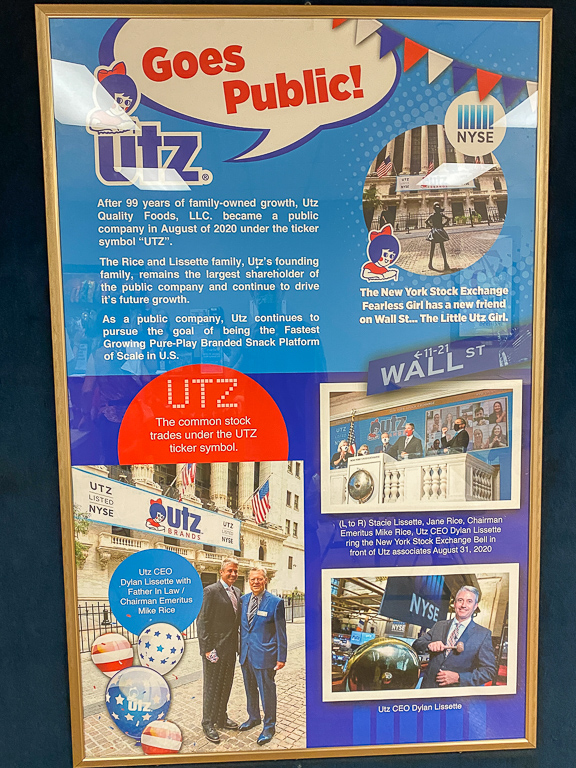 These days, there's a lot of love for Utz, You can get a potato chip bag pillow! I think it would be great if this smelled like potato chips! 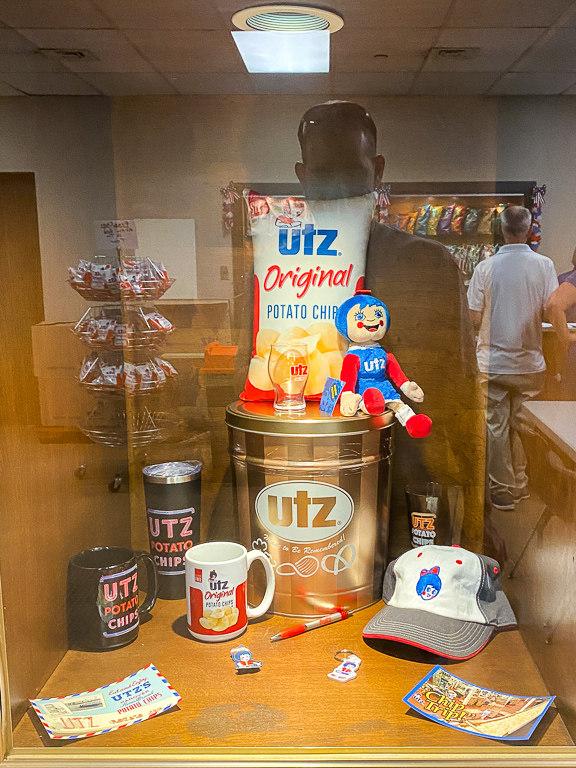 Oh wow. For someone who loves doing giant taste tests, this wall was amazing! Utz has so many different brands! Wouldn't it be something to try them all! 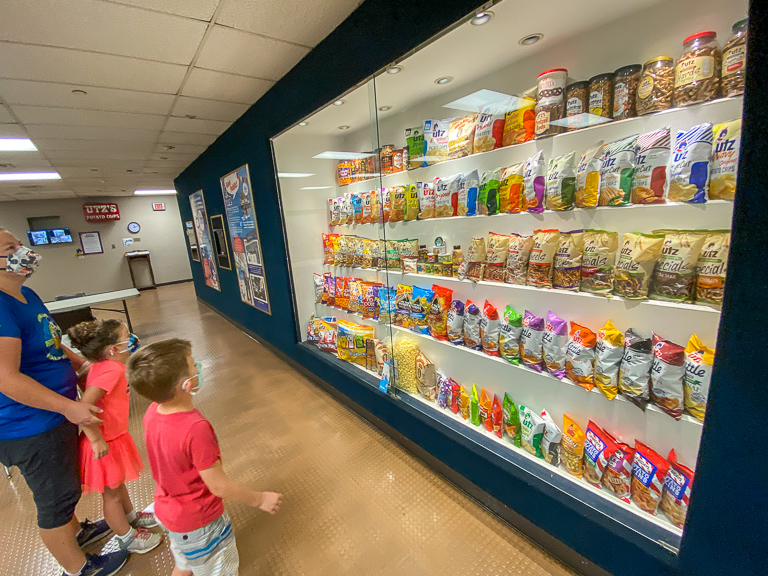 Ah, Ian sees his favorite. Those Utz Cheese Balls are calling his name. 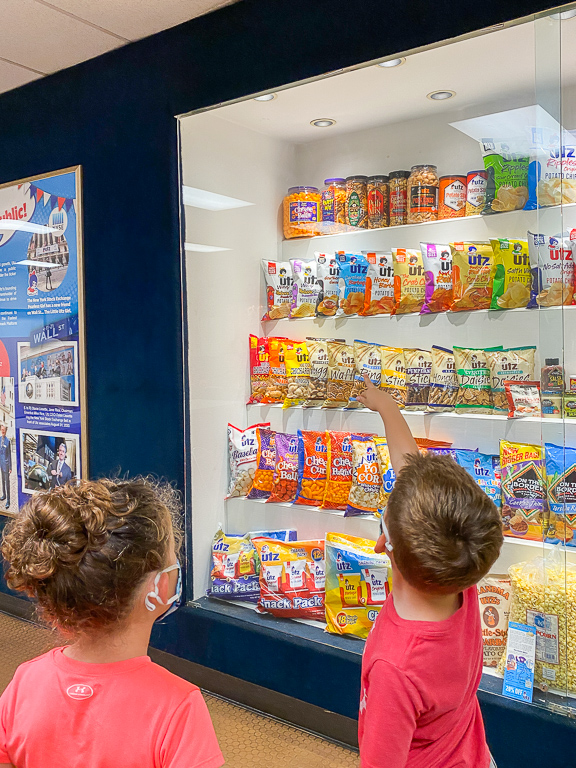 That previous window was everything Utz makes themselves. These are other companies that Utz has acquired. 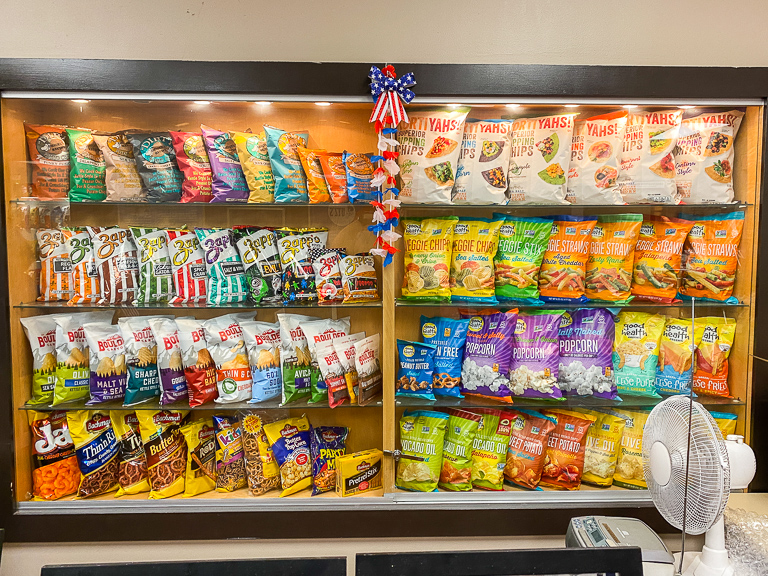 Now it's time to start our tour! It's a self-guided tour so we'll be going at our own pace. The first screen shows the potatoes as they arrive from the growers. 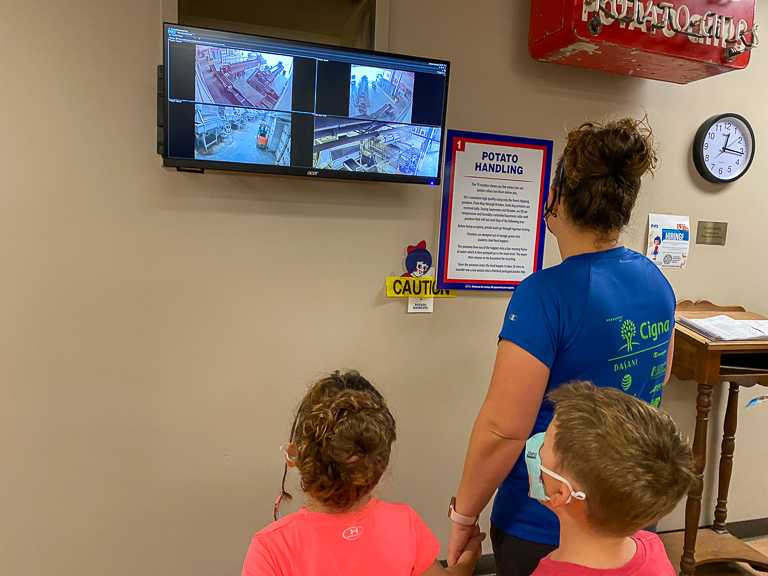 Potatoes come in on big trucks in the basement below. 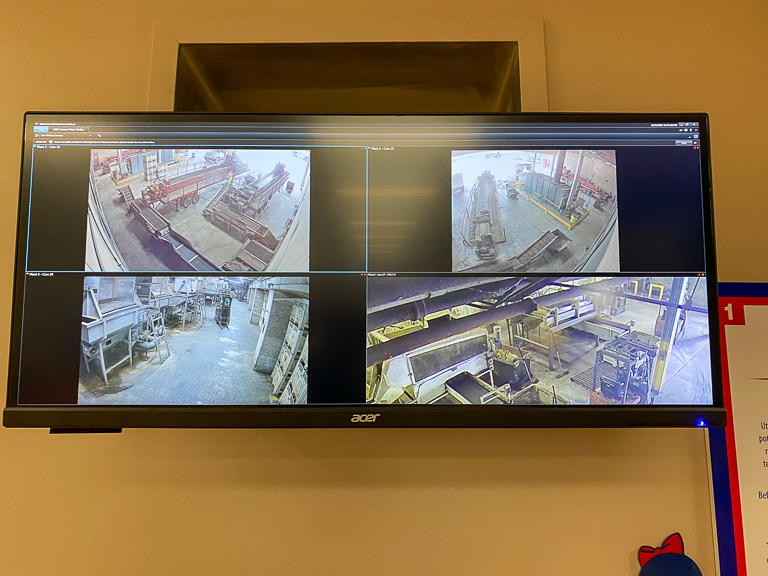 That looks a lot like the trucks we saw in the parking lot when we got here. 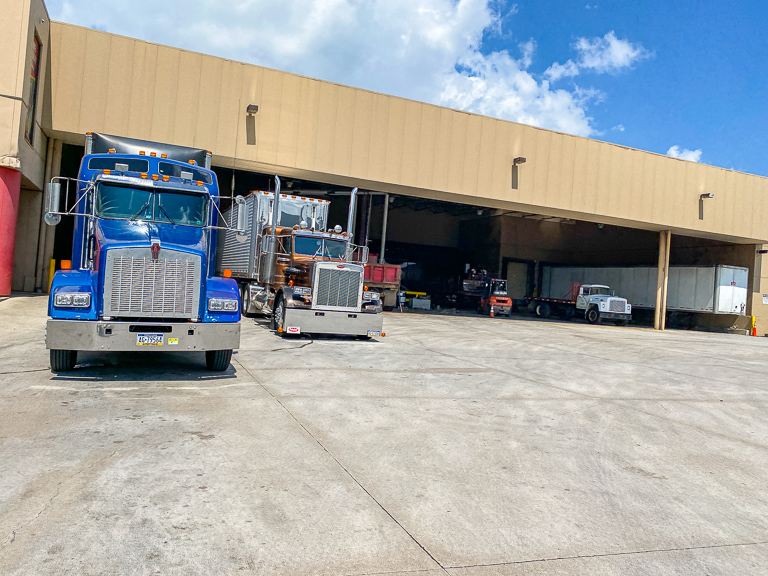 Next we moved over to the Observation Hallway. Oh no! What are those signs? No cameras or videos? Aww. 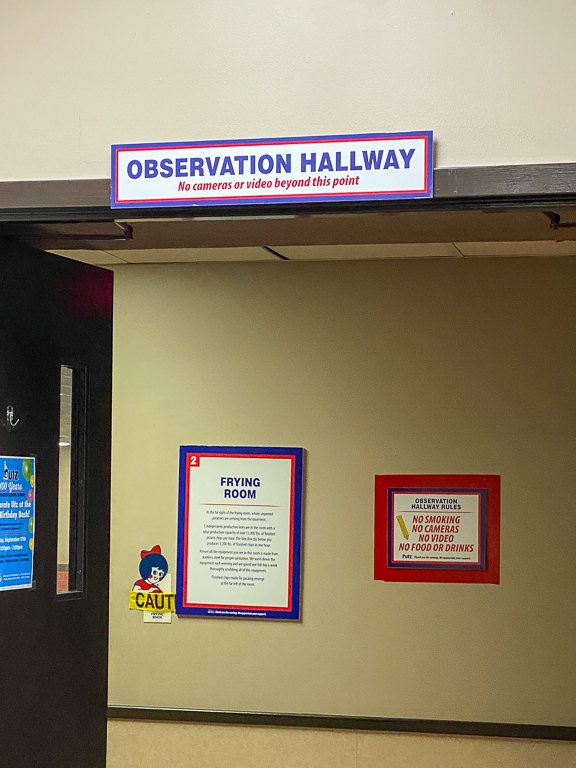 The lobby has archive photos from some of the early production tours. I'll show some of those instead.
Along the windows looking down into the production floor were red buttons, but they've been taped over. My guess is that they play an audio recording of that stage of production. In their place though are large signs explaining what's going on below. Theresa and I alternated reading them to the kids.
First the potatoes come in and are cleaned. They're peeled, sliced, rinsed, and then fried. They get salted, then shuffled off to the next room. A pretty amazing machine scans every potato chip and uses air to blow any dark or discolored chips into a separate bin. These chips get fed to cattle. 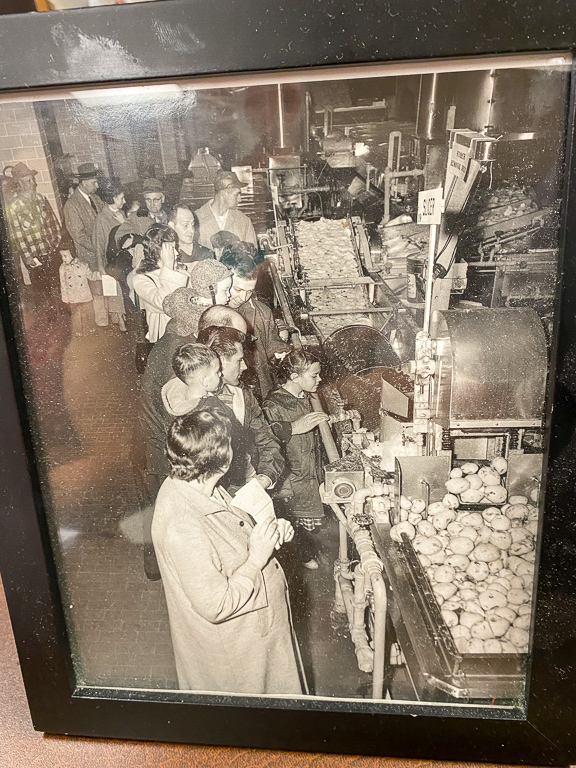 This whole hallway smells delicious. The workers here that we can see through the windows have been very friendly. Any time one looks up, they wave at us, and the kids make sure to wave back at them.
Chips travel down a conveyor belt system to flavor tumblers where seasoning is added. 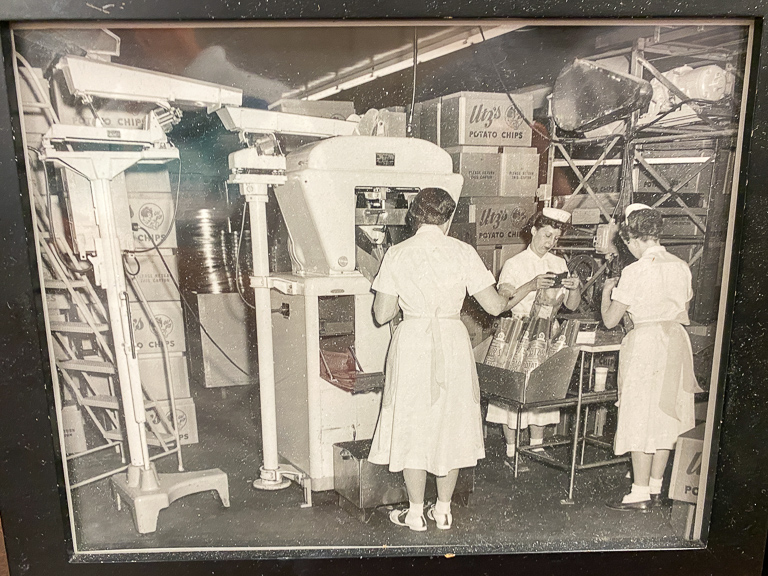 Chips go into a machine that weighs them, drops them into bags, seals them, and then they slide down to where a worker packs them into boxes. 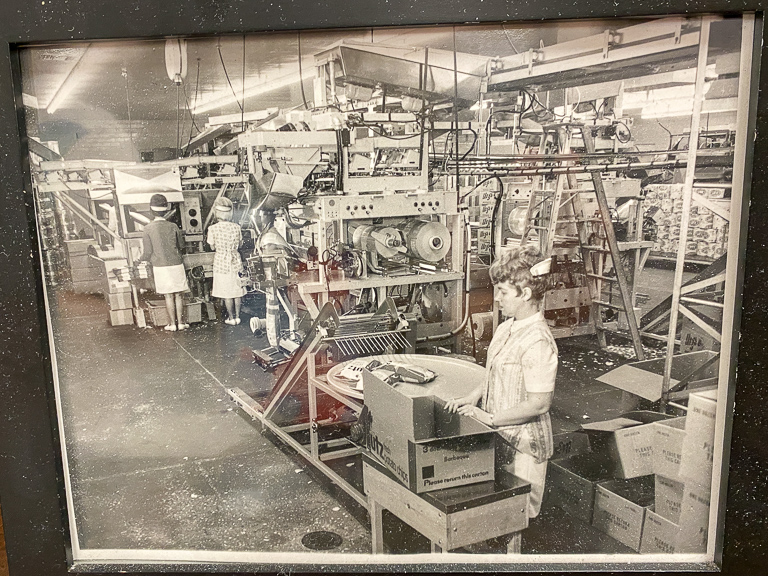 I'm surprised at how manual the process is, with workers packing boxes of chips by hand.
We saw how potato chips go from potato to chips to bags in just a few minutes. Now the kids want to see how pretzels and cheese puffs are made. We're going to have to look for more factory tours on our travels! 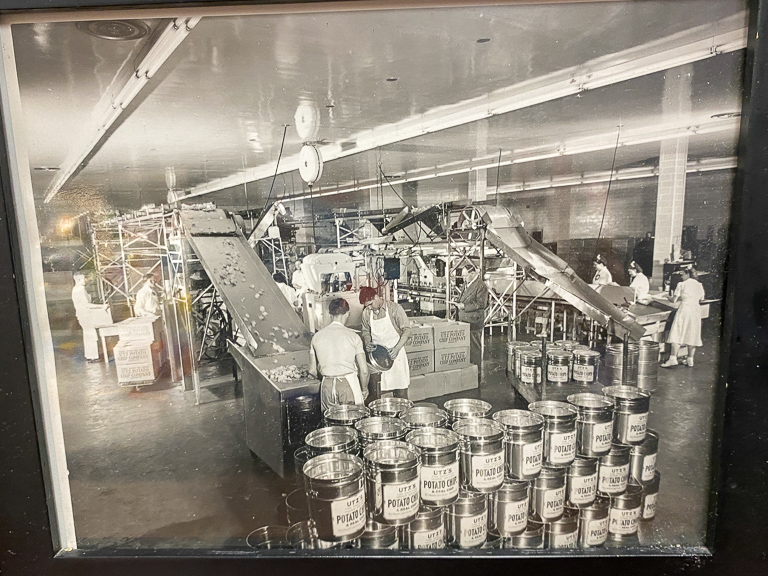 At the end of the tour, you're allowed to take a free sample of the chips! These were just made yesterday! 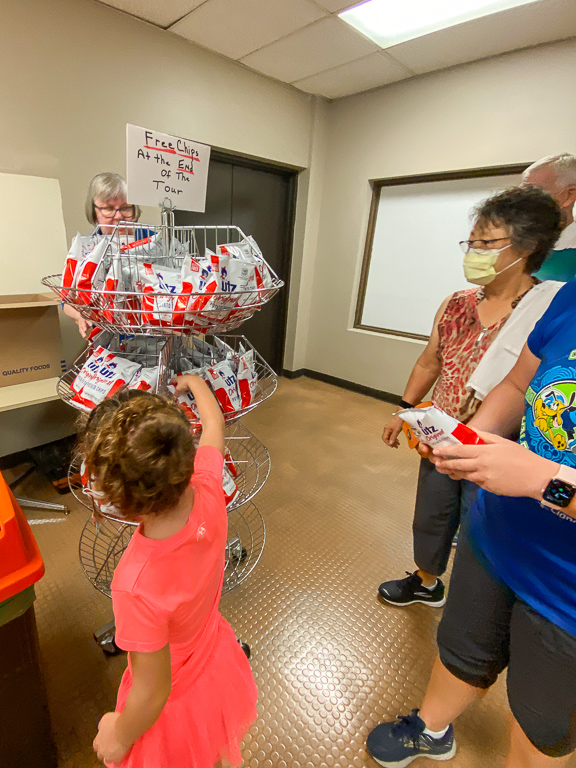 The Little Utz Girl has aged well for being 100 years old. 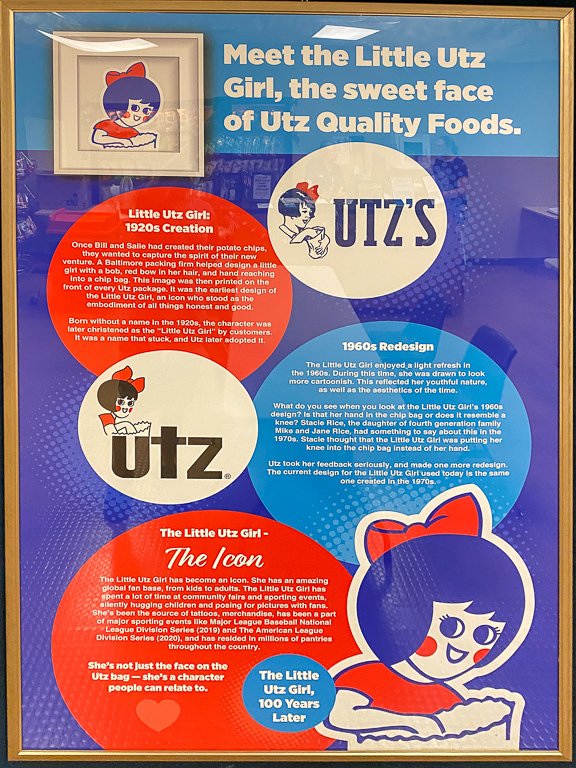 What a cute little Utz girl! So adorable! 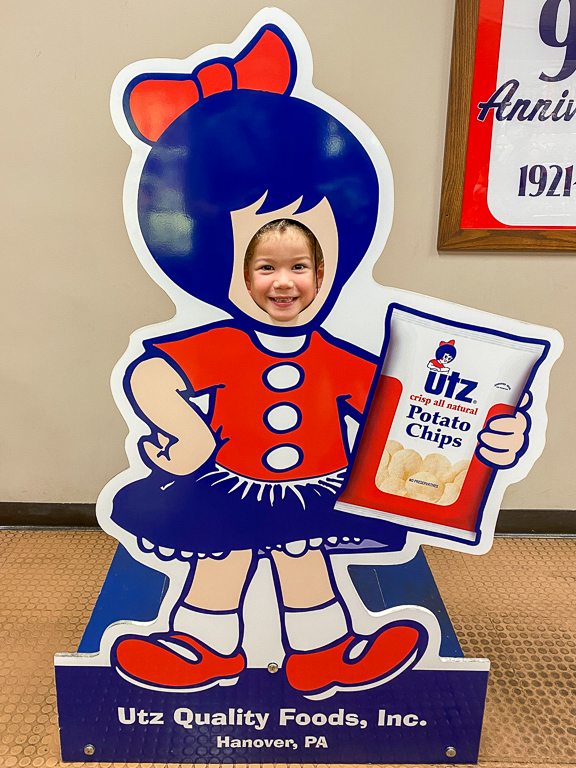 The tour was great, but now everyone is craving potato chips! Where shall we go to get them? How about the Utz Outlet Store just down the street? We'll head there in the next post!
Ian - utz potato chips factory - My favorite part was getting a free bag of chips. The potatoes are first peeled. Than they slice the potatoes. Than they bake. Than the chips are salted. Then they package.
Alli - My favorite prt was getting free patado chips at the end of the toor. We bot cesbols (cheeseballs). We bot difrit tipes of cesbols (different types of cheeseballs). We at almost all of them on the way back home. 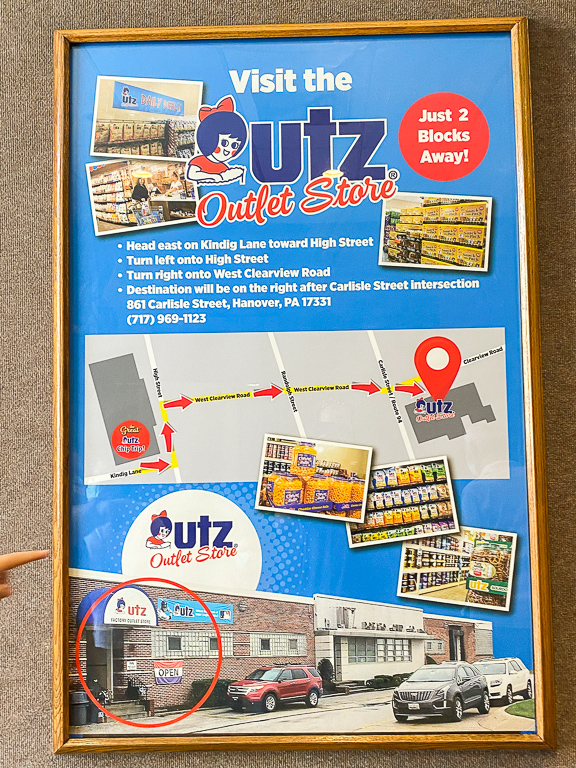