Today is our last full day in North Carolina and it's going to be a full one. We had such a good time in the Outer Banks a few days ago that we all decided to come back. Since we're here, the kids wanted to try to earn another Junior Ranger badge, so our first stop of the day is Fort Raleigh National Historic Site. 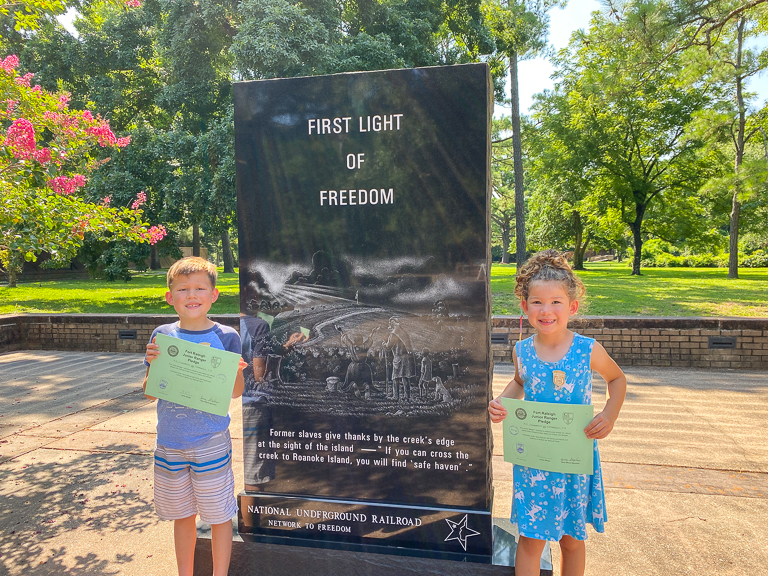 Volunteer Jerry was giving a Ranger talk as soon as we arrived, and so we quickly sat down and caught the beginning of it. His first question was "What should you do if you get caught in a rip current?" Ian's hand shot up! He just learned about what to do from one of our previous Ranger talks and Junior Ranger programs at the Bodie Lighthouse, and it stuck in his head.
Ian - You swim sideways to the shore.
Good answer Ian. And you also never swim alone, go in the water when it's choppy, and scream for help if you do get stuck in a rip current. 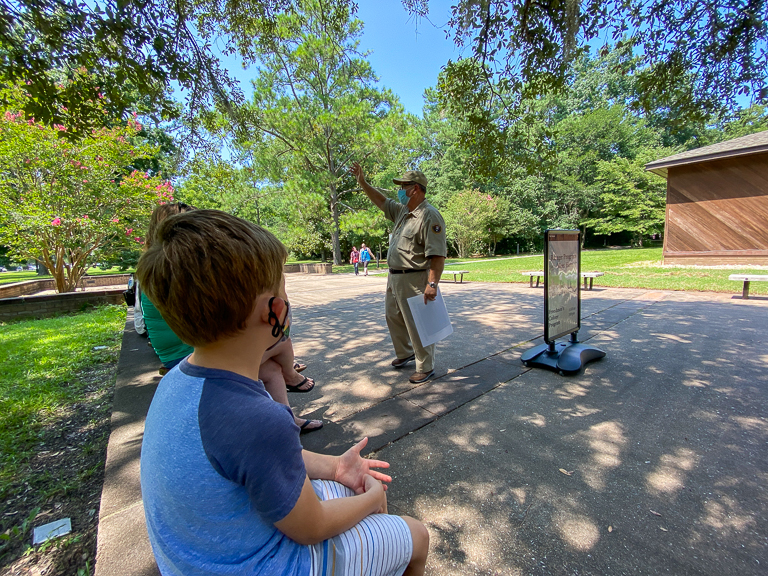 Next Jerry told us about how the story of Fort Raleigh actually has two major parts. The first is a tale about the Roanoke Colony and the Lost Colony back in 1587. The second is the Freedman's Colony founded during the American Civil War in 1861. 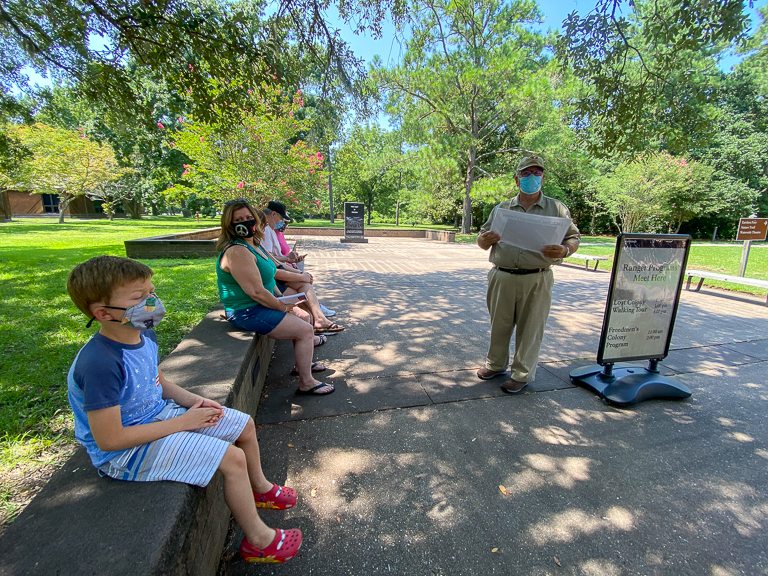 After the talk we went inside the visitors center to the small museum. 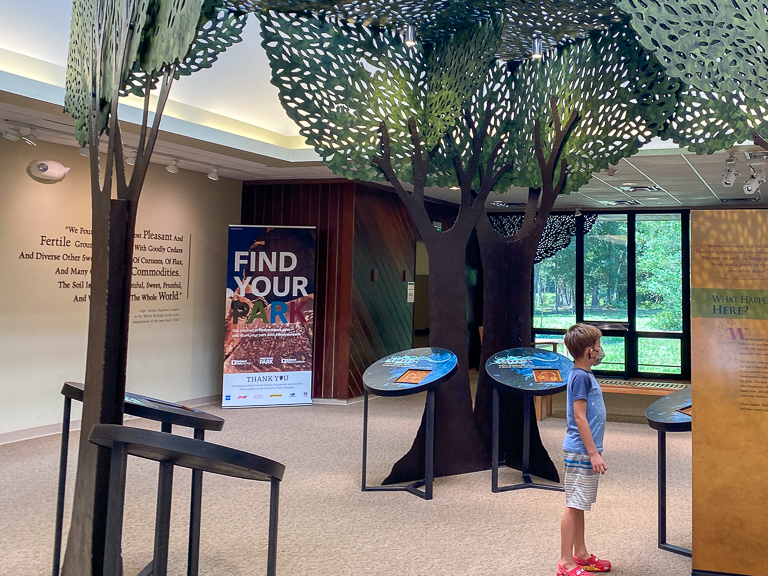 Ah, Jerry is back! Now we can get started with the Junior Ranger program activities. 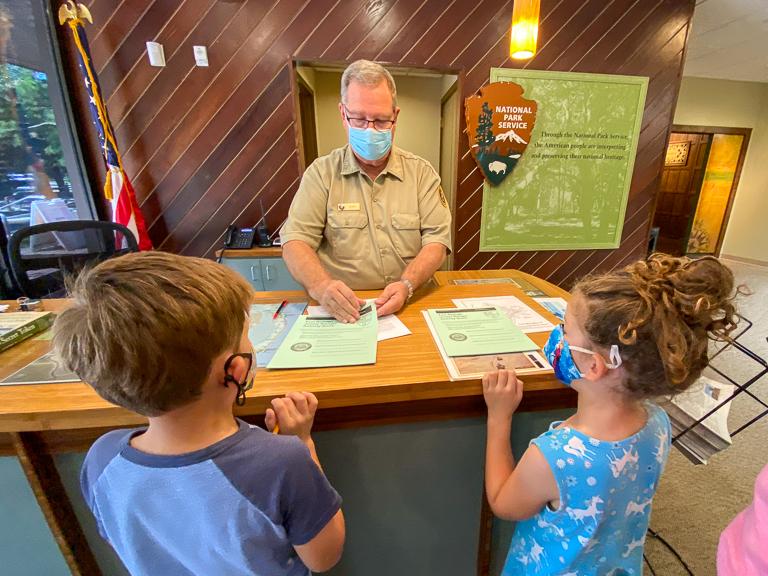 We're seeing similarities between a few of these Junior Ranger booklets and others. I wonder who actually puts them together for each National Park. The difficulty level at some sites is super easy, while others can be overly difficult for their age range. 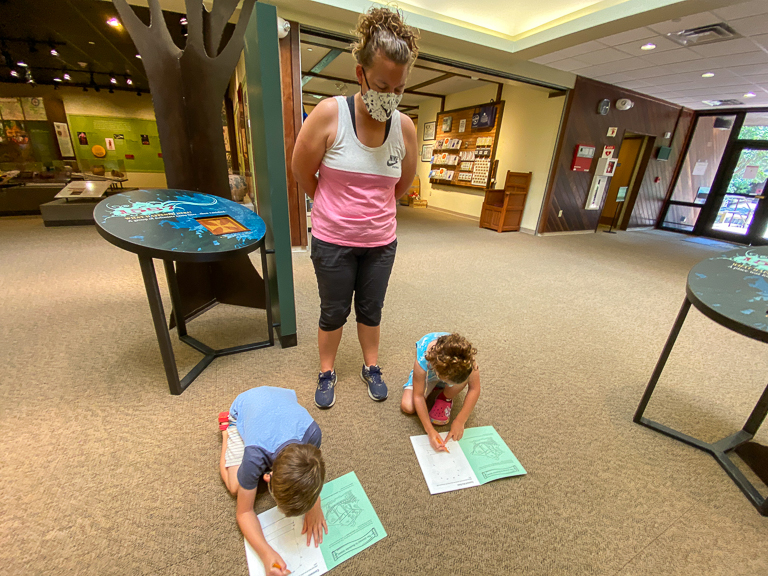 They filled in a National Park Ranger Badge with things that are important to them. Ian wants to make sure water stays clean, and protect trees and turtles (I think the Bodie Lighthouse Ranger talk might be influencing that). Alli chose a puppy and flowers. 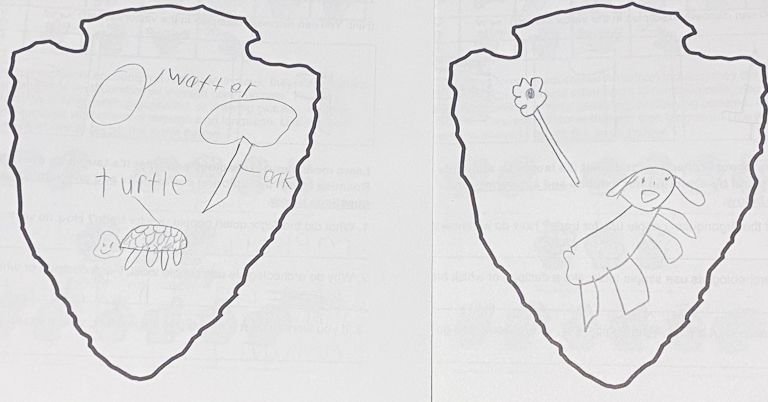 What kind of things would you take on a voyage across the ocean? Food and a fishing rod is what these kids thought of. Connect the dots and name the monument? We'd soon discover that it's the 1896 monument that we'll see shortly. See how easy some of these activities are? 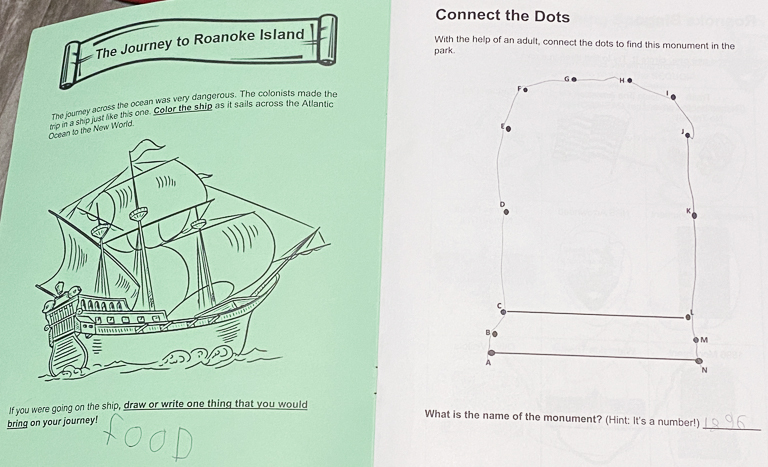 For Bingo, or more like Tic-Tac-Toe, we need to find three of these in a row. We found all nine of them! 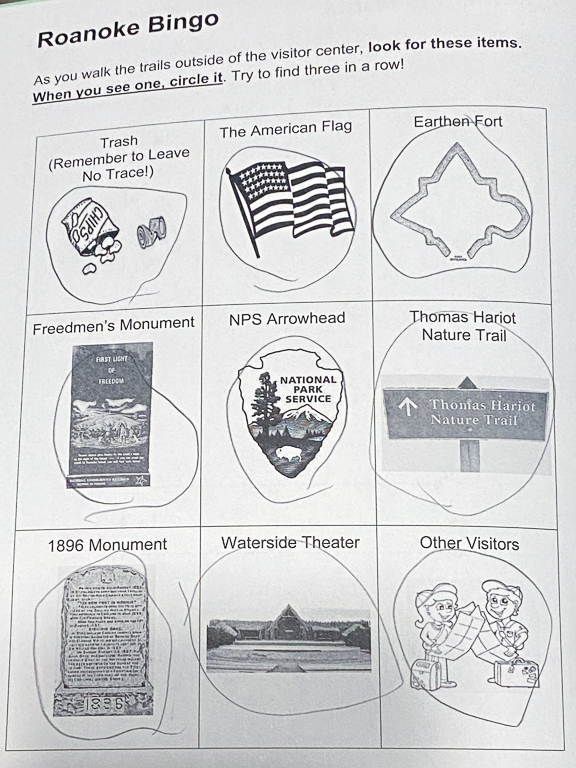 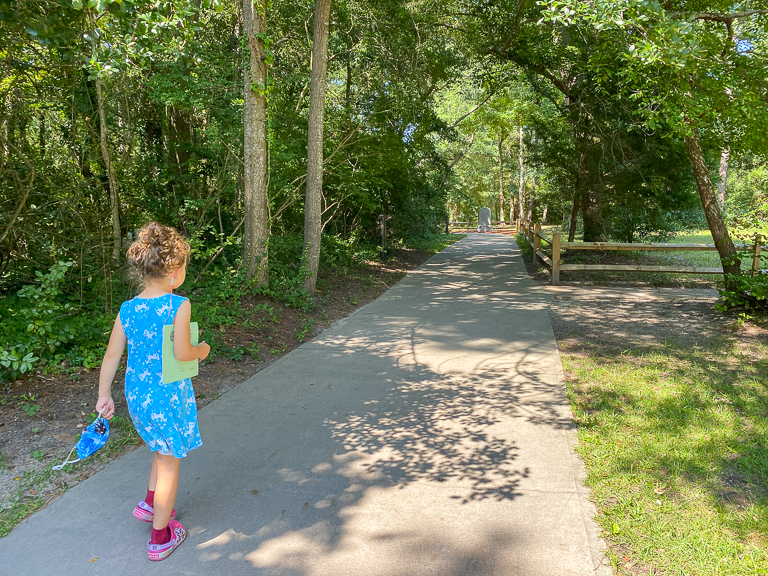 The Roanoke Colony, founded in 1585 by Sir Walter Raleigh, was the first attempted permanent English settlement in North America. The first colony failed, and so a second colony was attempted in 1587. It was then that the first English child, Virginia Dare, was born in this New World colony in America. 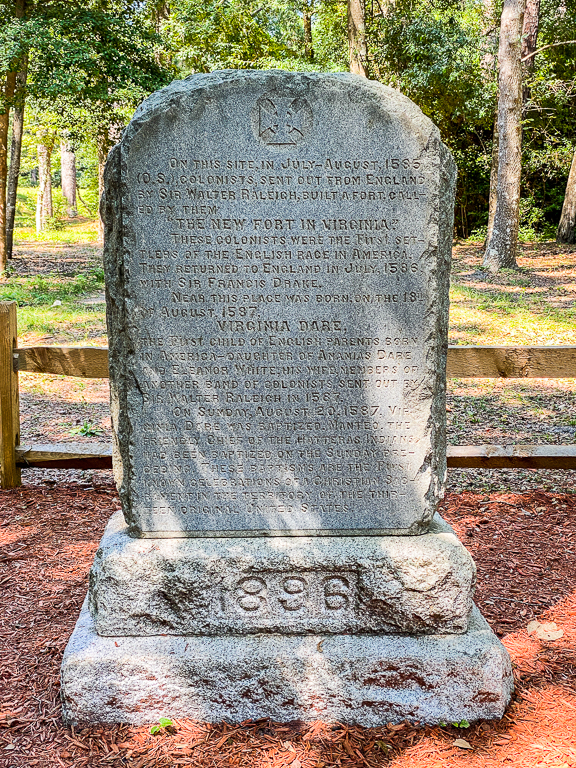 She was part of the Lost Colony, made up of 80 men, 17 women, and 11 children, who disappeared without a trace. John White was the governor of the colony and sailed to England for additional supplies in 1587. His return was delayed due to war until 1590, and when he returned all the colonists were missing. The letters CRO were carved into a tree, and the word CROATOAN was carved into a post on the fence of the fort, supposedly indicating that everyone had moved to Croatoan Island. The colonists were never found though, and it's still a mystery what really happened to them. 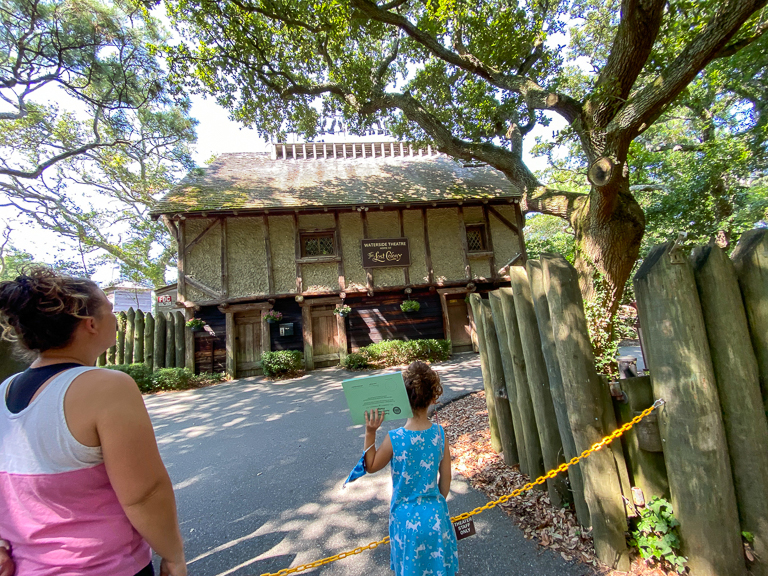 Jump forward about 300 years, and it's 1861. America is in the middle of a Civil War and North Carolina has seceded from the Union. The Confederate Army built forts on Roanoke Island, but in 1862 Union General Ambrose Burnside captured the island and controlled it through the rest of the war.
Slaves were considered to be property, and during the war Generals were allowed to disposition property as they saw fit. When/If a slave could make it to Roanoke Island, the general there would then declare them no longer property but Freed Men. The number of freedmen increased from 200 to over a thousand by the end of the year.
Here these freedmen started to form their own city, with homes, farms, schools, and churches. At its peak, the population of the Freedmen's colony reached 3900. In 1865, with the Civil War over, President Andrew Johnson issued the "Amnesty Proclamation" which returned all property seized by Union forces during the Civil War (except slaves) back to their Confederate owners. The Freedmen were kicked off the land that they'd worked to cultivate and forced to relocate. A sad ending, but this site was an important stop and a place of hope to the slaves that were able to make their way here and find their freedom.

Walking along exploring the grounds, the kids were excited to see a white-bellied squirrel. 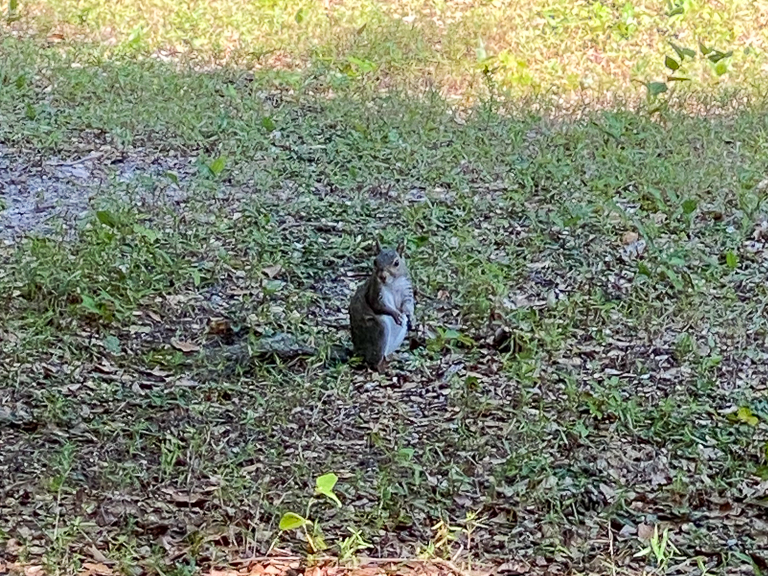 As well as some funky mushrooms. 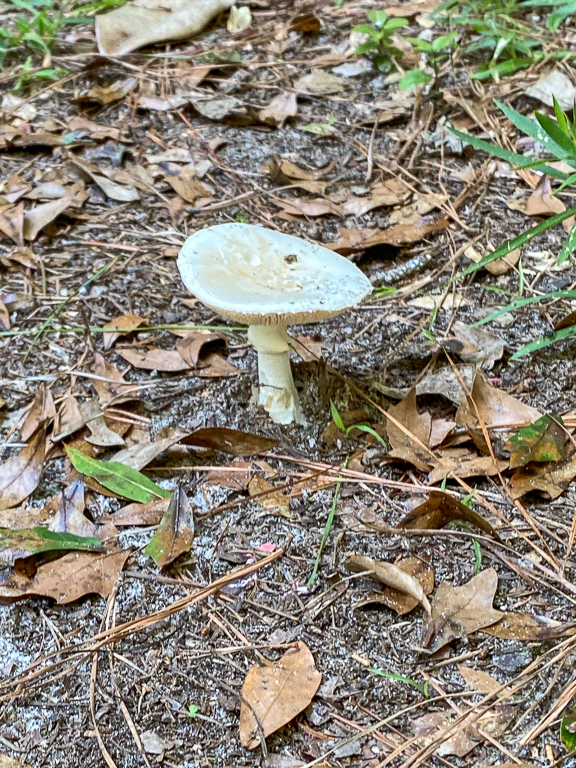 With their Junior Ranger activities complete, it was time to return to the visitor's center and get their badges. 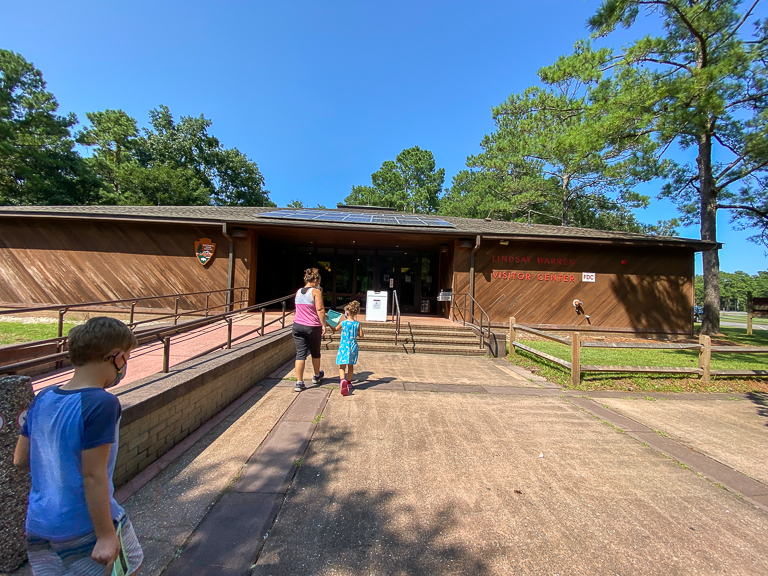 Volunteer Jerry checked their work and signed off on their answers. 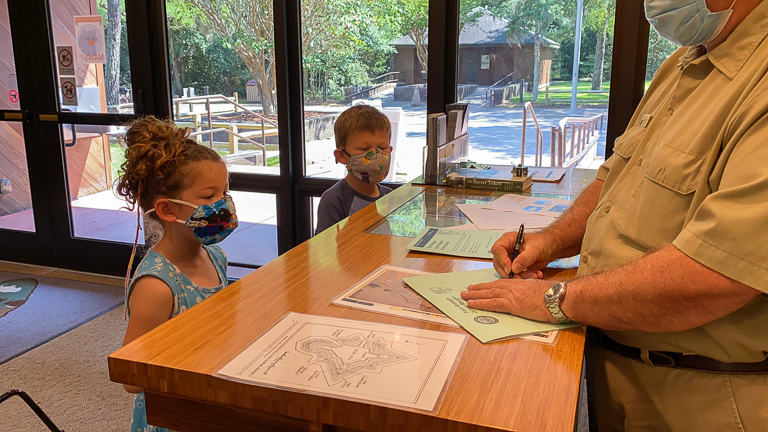 And in front of the National Park Service insignia, they were sworn in. 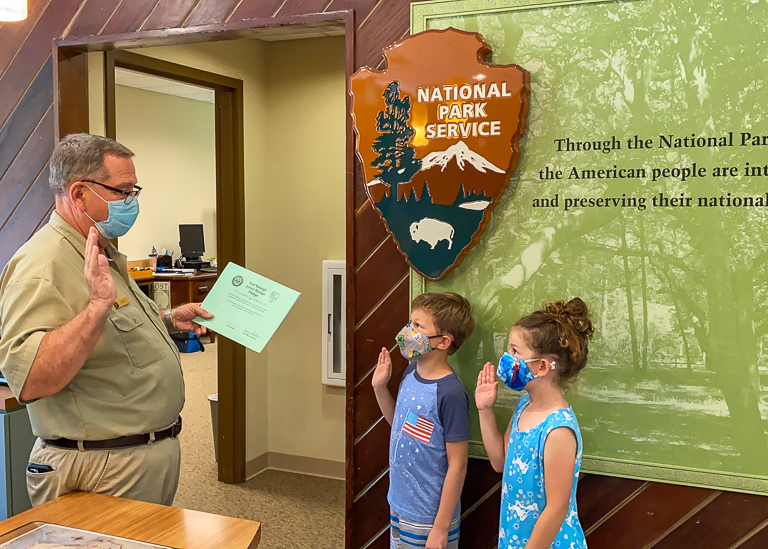 Special to this location, there's more than one design for the Junior Ranger badges. One shows the Native American that were originally here, and the other shows the CRO tree of the Lost Colony of Roanoke. They decided to each get something different. 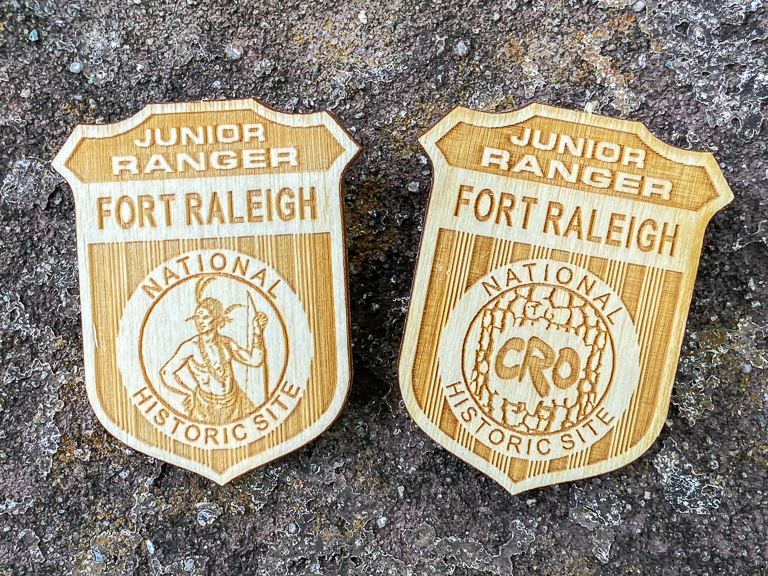 Great job Junior Rangers! I'm glad you're having a good time learning about some of the history of America!
Ian - I like the outer banks. My favorite part was seeing a white belly squirrel. I got a jr. ranger badge!
Alli - We got joonyr Ragr bag. We sow r day ley anml. the day ley anml was rik and mody. they r scwrs. (We saw our daily animal. The daily animal was Rick and Morty. They are squirrels.)
Some background, at one of our first campground sites the kids noticed the squirrels and named one Rick and another Morty. They've never seen the TV show, so I don't know where the names came from. Any time we get to a new site, inevitably there's squirrels there too, and they are still Rick and Morty who have travelled (running I suppose) along with us and found us at the new place. 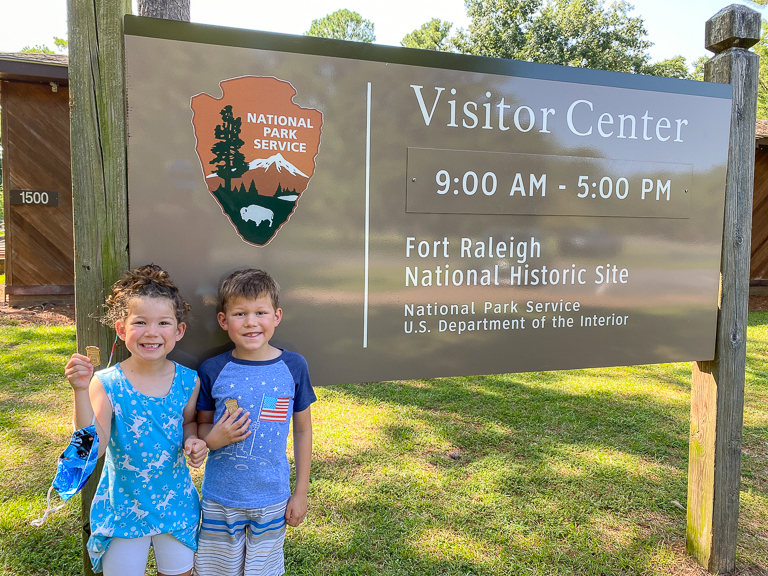