Happy Sunday! Time for another pizza in the RV! Just about every week we're in a new location, and I'm trying to theme my homemade pizzas to the region we're visiting!

This week we're in New York. I already made New York Style pizza with the giant foldable slices when I first started this pizza journey over a year ago. Let's see, Big Apple, I've already done an apple pie pizza before.

A look at google for "what foods is NY known for" shows the second most popular item listed is New York Style Cheesecake. Tonight I'll be making a New York Strawberry Cheesecake Pizza! 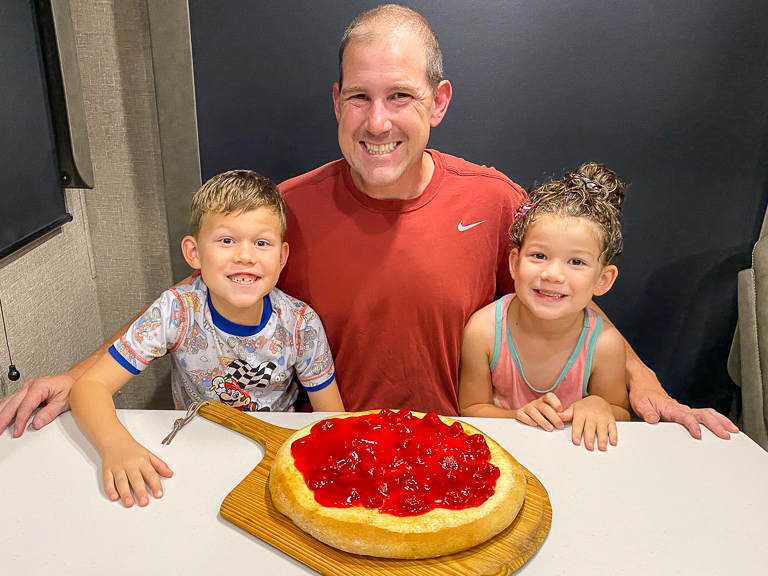 But we can't just go having dessert pizza for dinner. I'm making a few regular pizzas too. For myself and anyone else who wants to share, I've got a pepperoni, ham, bacon, mozzarella, provolone, and edam pizza. Of course Ian needs his pepperoni pizza. And for Alli, she's getting an order of breadsticks to dip into the sauce of her choosing. 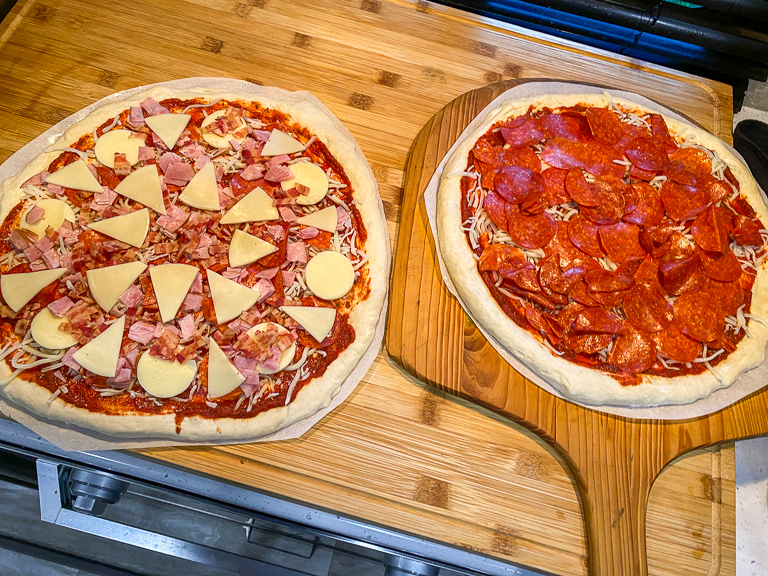 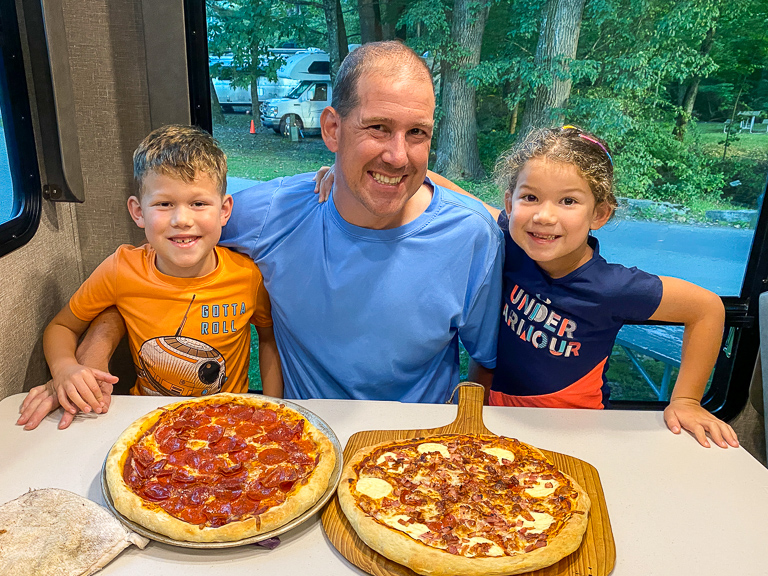 My plate tonight. Not gonna lie. My pizza was delicious. 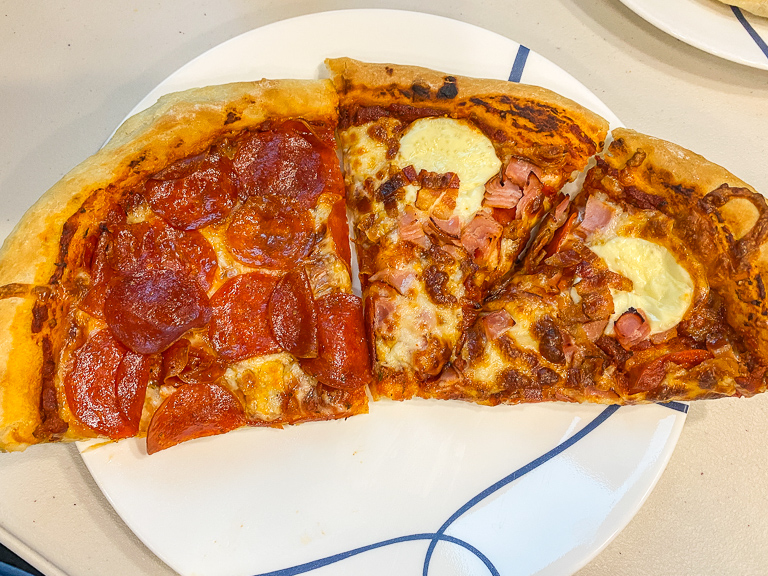 Aww, Ian is sharing his pizza with his sister. 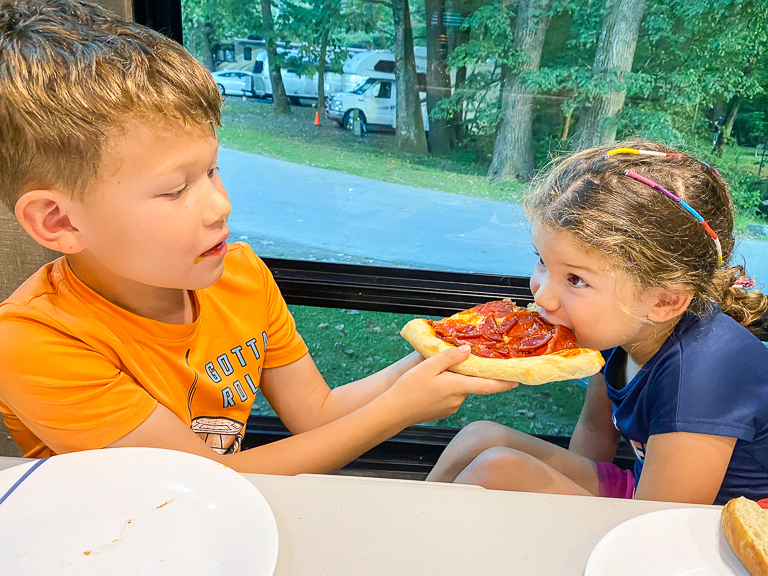 Alli, what are you doing?
Alli - Putting sauce inside my breadstick. 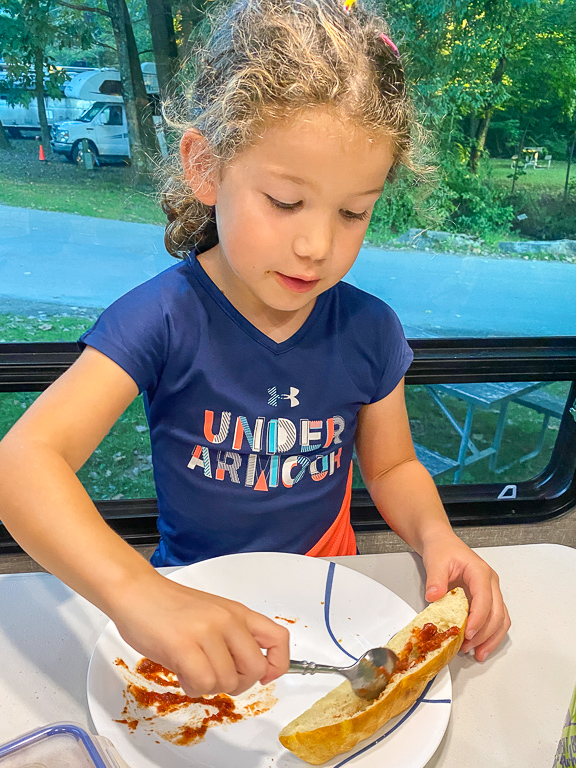 Alli, where did you get those pepperonis?
Alli - (giggling) From Ian.
You know you are just making a do-it-yourself pizza out of all the ingredients I have been using all this time. 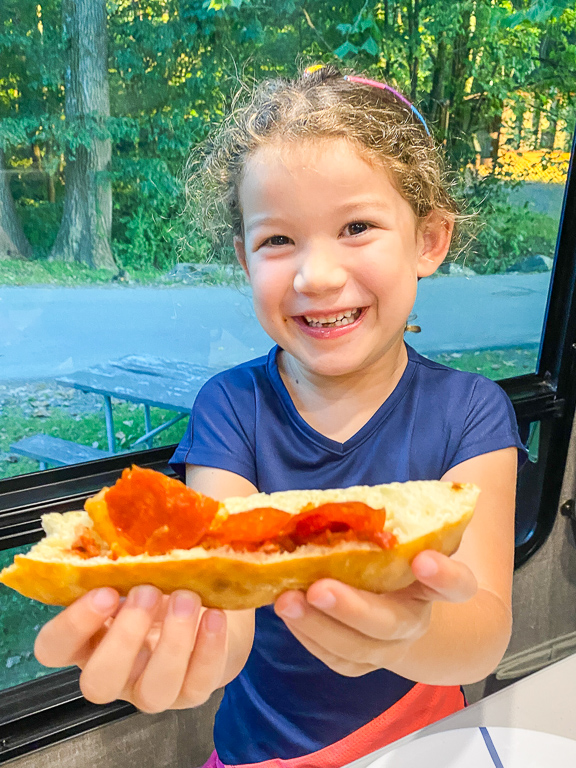 Sharing her creation with Ian. 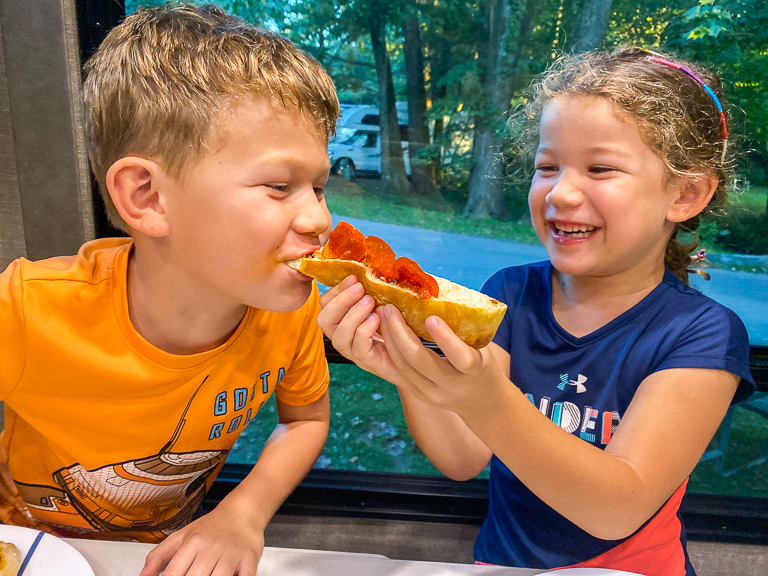 Earlier in the day, both kids wanted to help me get the crust for my dessert pizza ready. Theresa reminded me that Cheesecake generally has a graham cracker crust on it, so I'll be doing something similar to last week's S'mores pizza from Hershey Pennsylvania. It starts with a whole lot of graham crackers that have been crushed up. 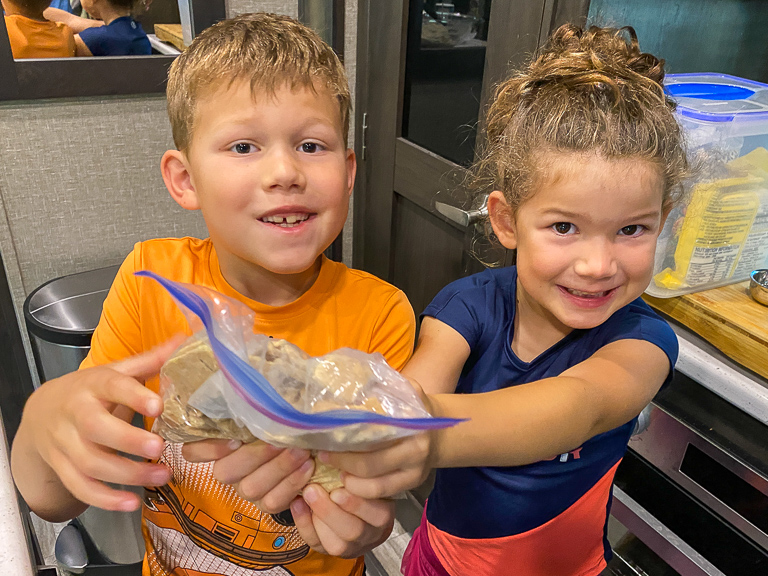 Then Alli added it to a bowl of sugar and yeast. 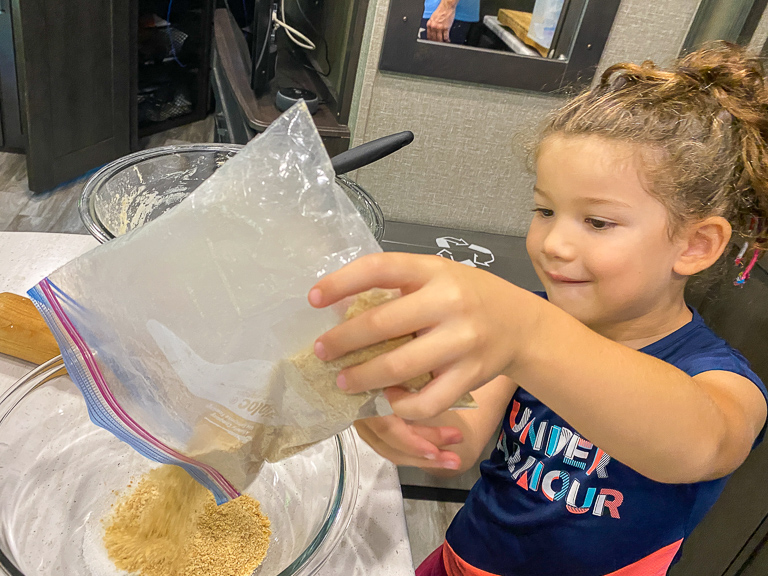 I added enough water to make it the consistency I wanted, then I tossed in a little bit of my pizza dough that I'm using for the other pizzas tonight. I mixed it all together and set it out to rest for a couple hours. 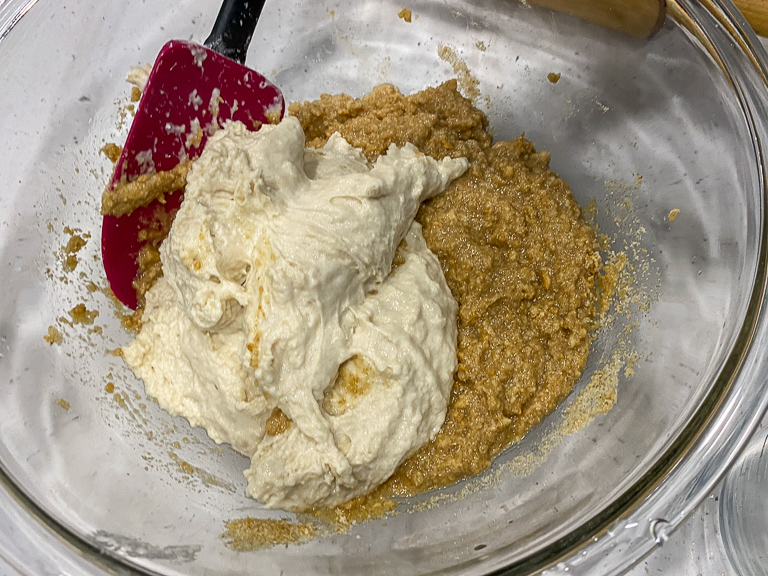 This pizza dough is happy! In another bowl I combined an egg, sugar, vanilla, and cream cheese. 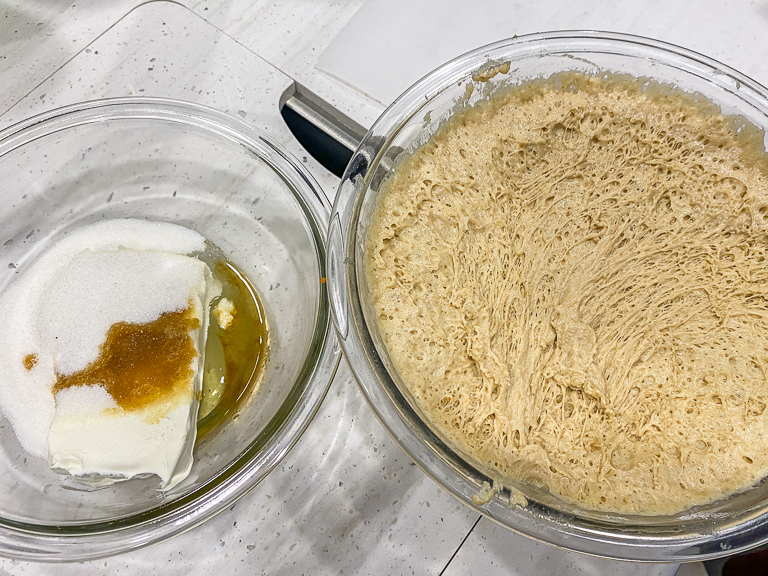 Using my mixer I blended it all together until it was creamy and smooth. 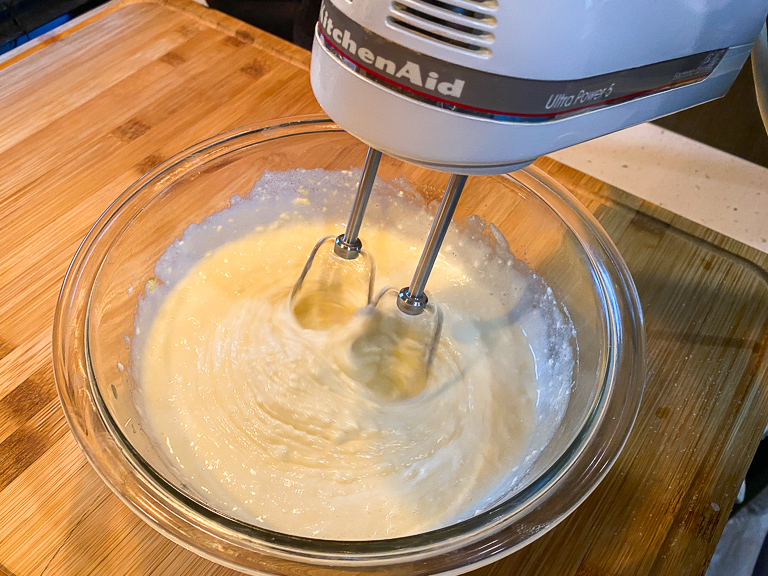 Then it was spread over my raw graham cracker dough. 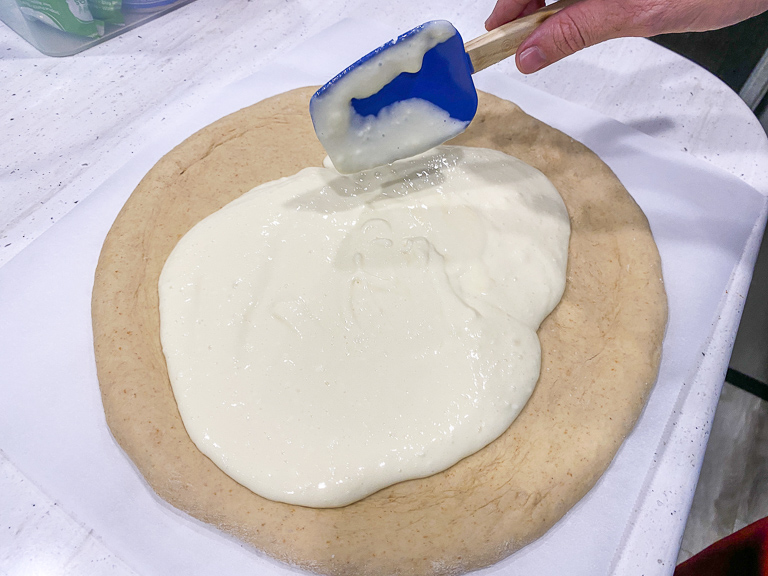 This pizza is baking at only 350F, much cooler than my normal pizzas. I've also turned off the convection setting, so it's just the ambient heat with no additional fan circulating the air. 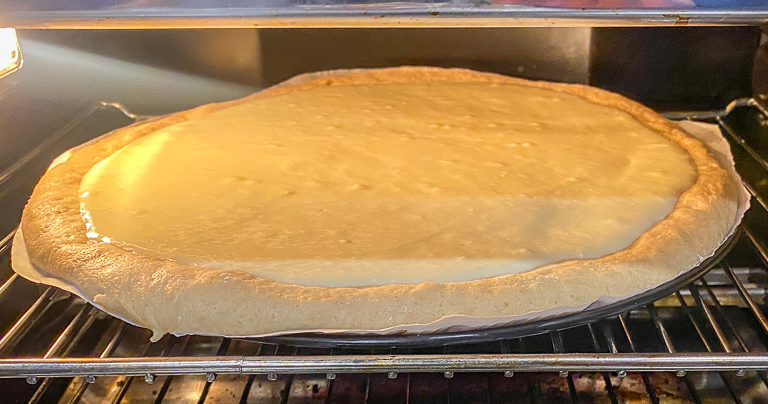 After about 22 minutes the cream cheese mixture has set up and it's ready to cool off on the counter. 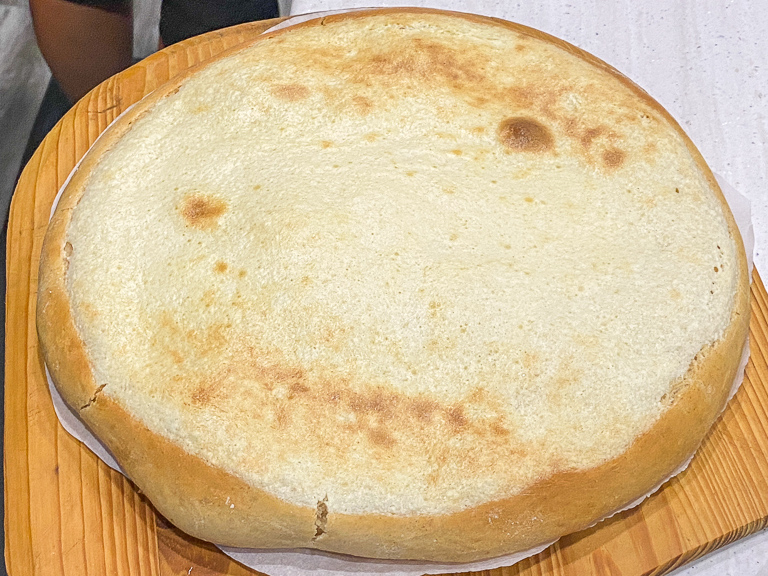 There's just one more thing I want to put on my New York Cheesecake Pizza. Strawberries! 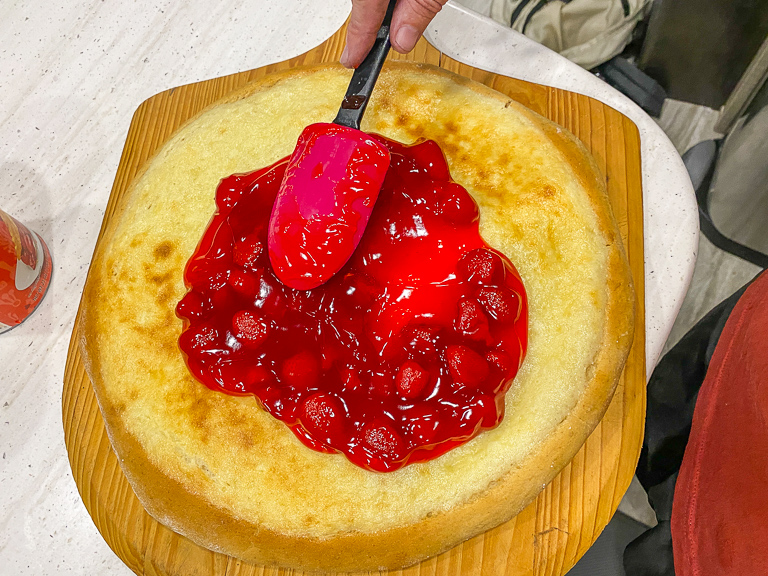 That does look pretty tasty! 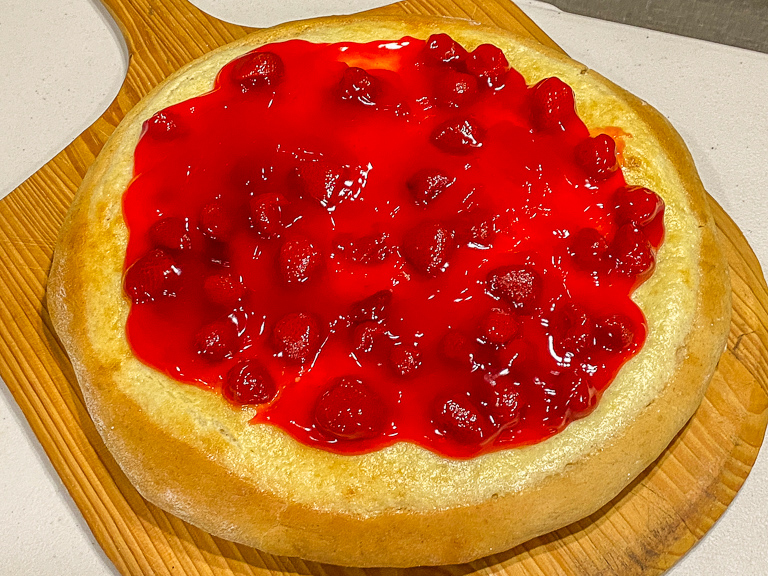 Ian got up close and said it smelled really good too. 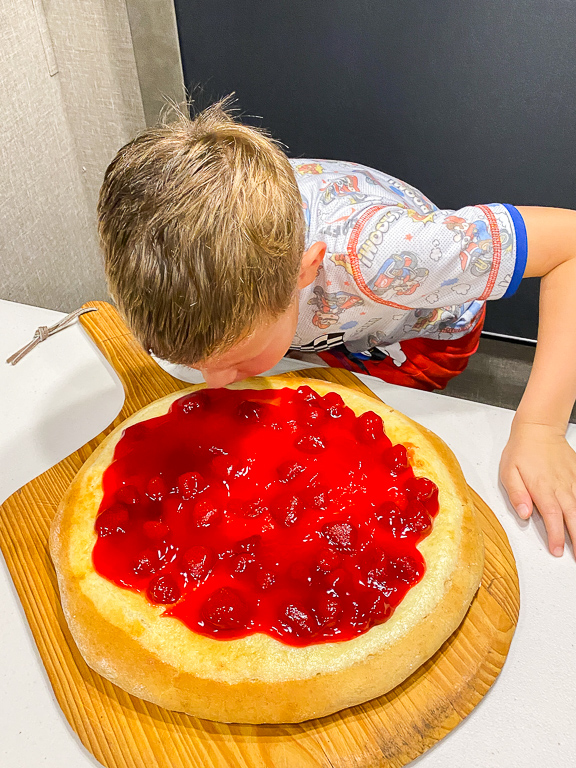 Let's cut it up and dig in! 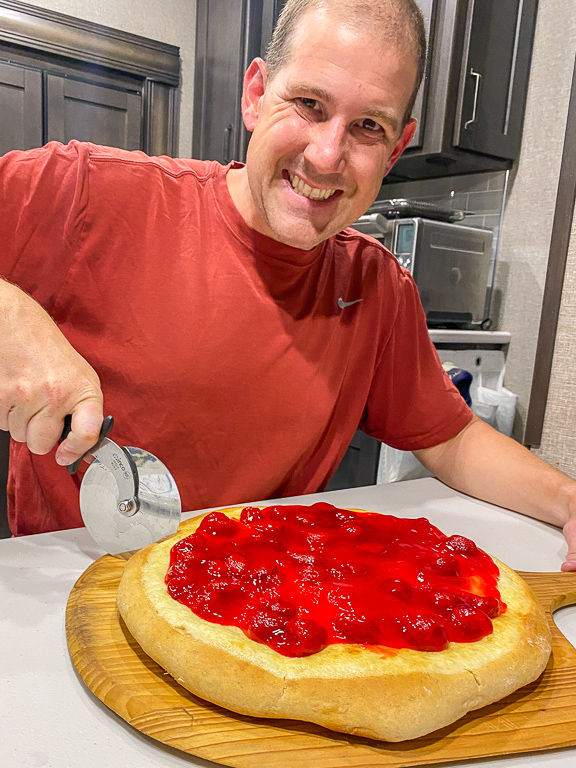 Honesty time. It could be better. I had seen another recipe use 8 oz of cream cheese, but it's a pretty thin layer across the top. You could easily double and maybe even triple the amount of cream cheese filling. The Graham Cracker dough is good, but I'd make it a bit thinner next time. My pizza gets very fluffy and the ratio of crust to filling wasn't what I was hoping for. But still, it's sweet cream cheese on sweet pizza dough, with sweet strawberry topping. It's still tasty. Just not exactly what I was picturing in my head.
Theresa - It's better than anything from Goofy's Kitchen.
Why would you say that?
Theresa - Because they're the only other ones I've had that make dessert pizzas. 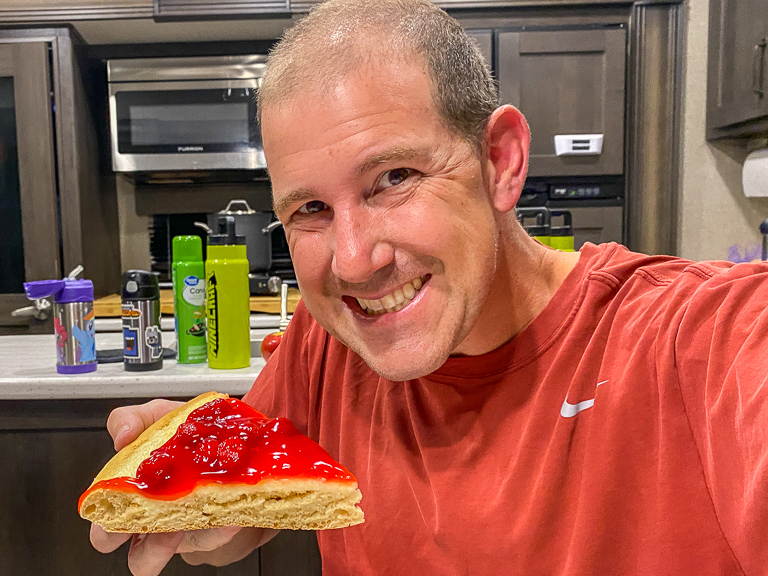 But how about the real critics. The children.
They loved it! Both of them gobbled it up, and had to be reminded to take smaller bites. Ian loved the strawberry topping, while Alli would have preferred cherries. 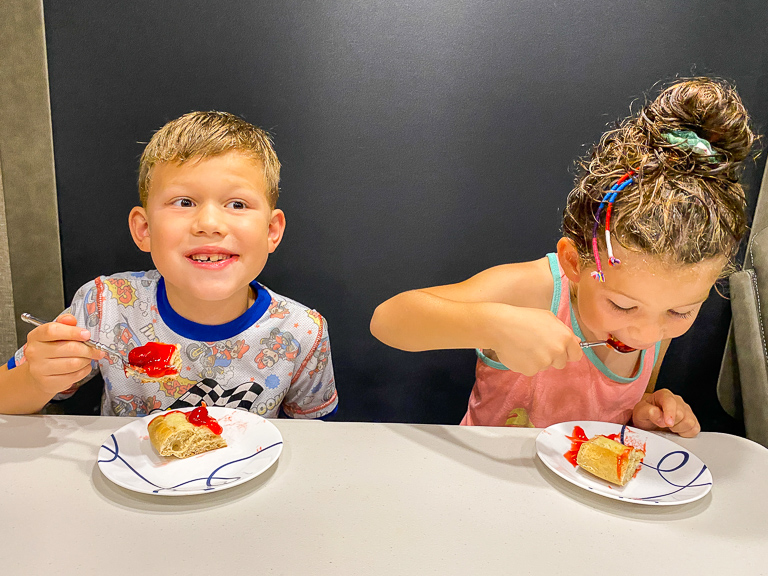 Together - Can we have seconds?
I guess they really do like it! 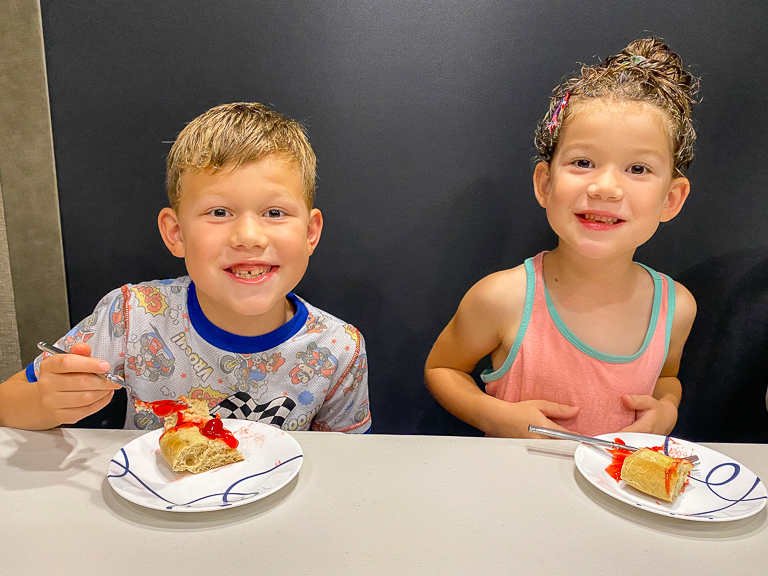 Going down the list here's the states I've covered so far.