It's Sunday and time for Pizza! Being a July 4th weekend, my mind takes me to New York. The Statue of Liberty and people coming to America for the very first time. I figured our pizza today could take us there also, and so today we're doing a New York style pizza. 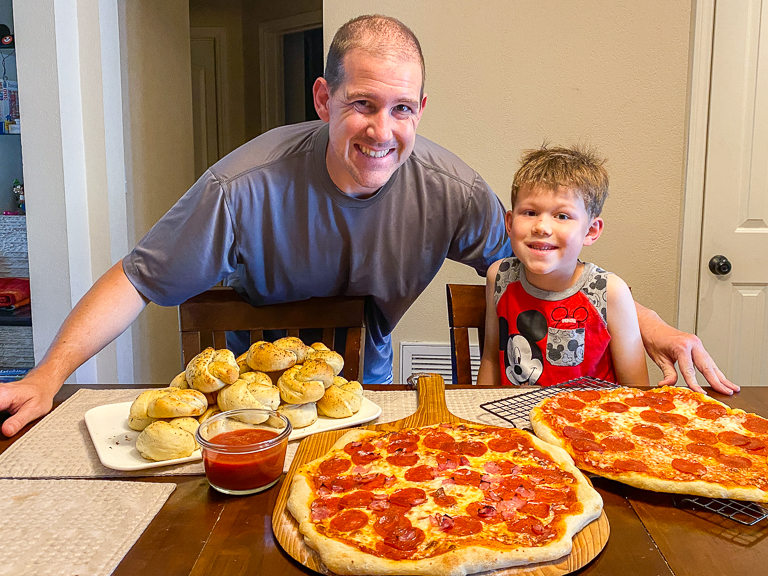 Pizza dough comes in all forms. For my New York style crust, I'm getting my recipe from feelingfoodish.com. The only thing that really changes are the ratios of flour and water. There's also small variations in yeast, salt, sugar, and olive oil. 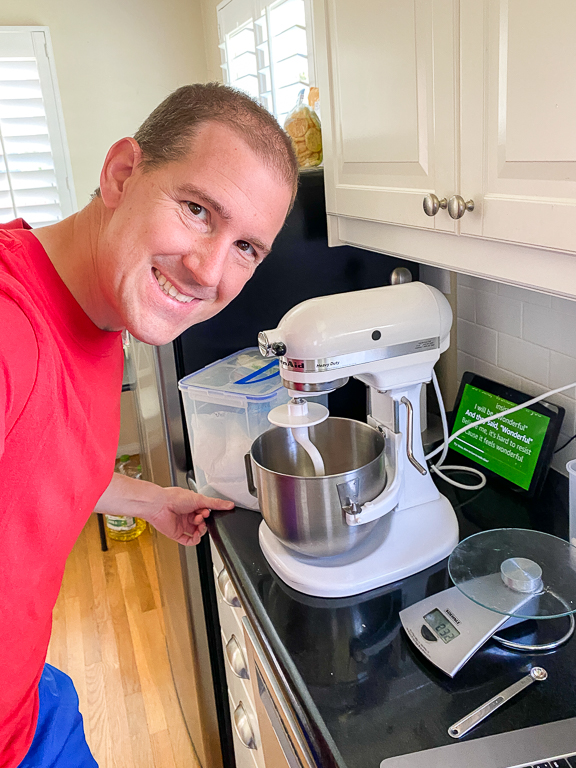 This is the first time I've been asked to measure the temperature of the dough after mixing. The site suggested cold fermentation, which means it's going to take a couple days for the flavor to develop. I started the dough on Friday, placed it in an oiled gallon ziplock bag and put it into the fridge until Sunday. 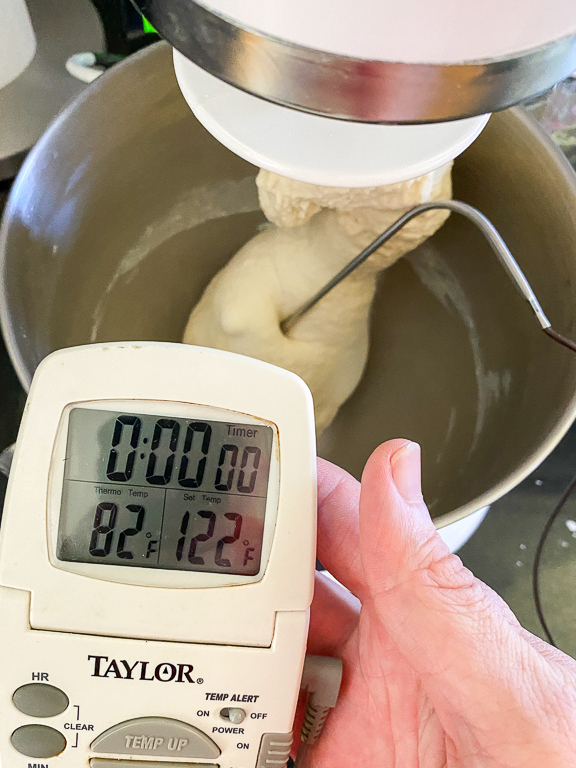 For all these Pizzas we're making at home, I've also been making side dishes to go with it. We've done fresh baguettes and balsamic vinegar, fresh baguettes and bruschetta, cheese bread, and breadsticks. I was trying to think of something tasty to go with it when my sister-in-law suggested garlic knots. Garlic Knots! I love those!
I've used SallysBakingAddiction.com for a few things. This time I saw a well reviewed recipe for Homemade Garlic Knots. This new yeast we have is really active! 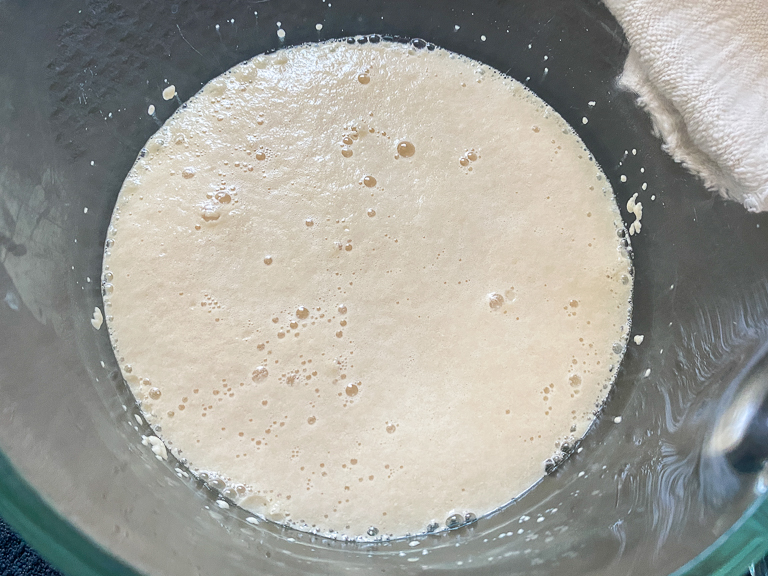 It went into the mixer for a few minutes with flour, sugar, salt, and oil. Now it's got to rise for a couple hours. It's a beautiful warm day in So Cal, so it won't have any problem finding warm temperatures to expand. 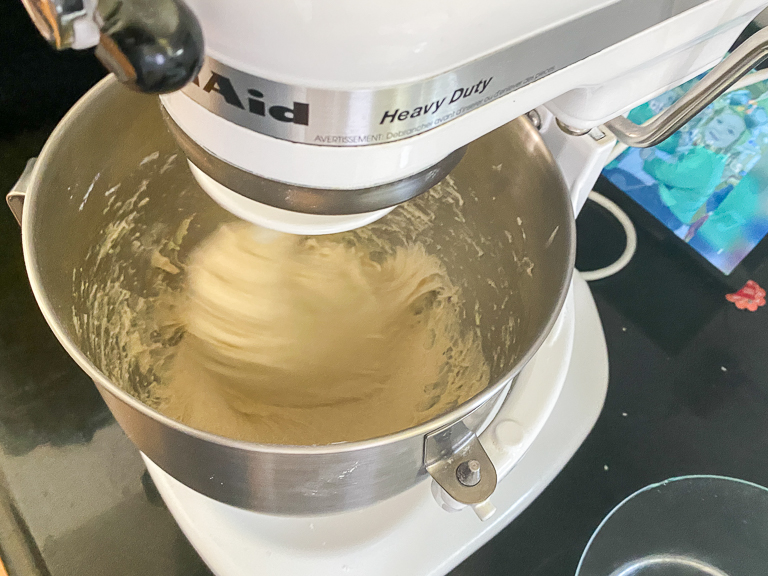 While the dough it doing its thing, we're also hanging out. The kids have been playing in the front yard in a kiddie pool, chalking up the driveway, and enjoying the sunshine. I had them run off and grab a couple Disney books and read them the story of The Rescuers Down Under and Donald's Birthday. Each book is pretty thick and takes about 20 minutes to get through. 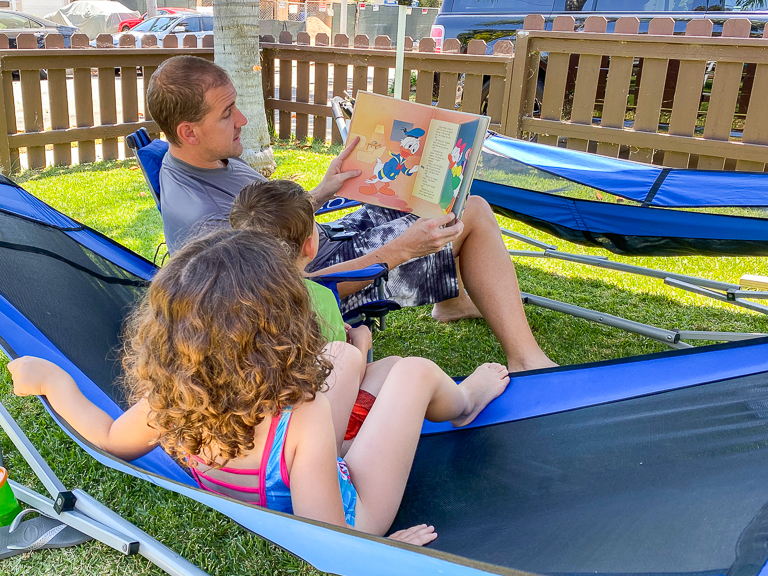 About 45 minutes before dinner, I was back inside prepping the Garlic Knots. The dough has risen nicely. Very fluffy. 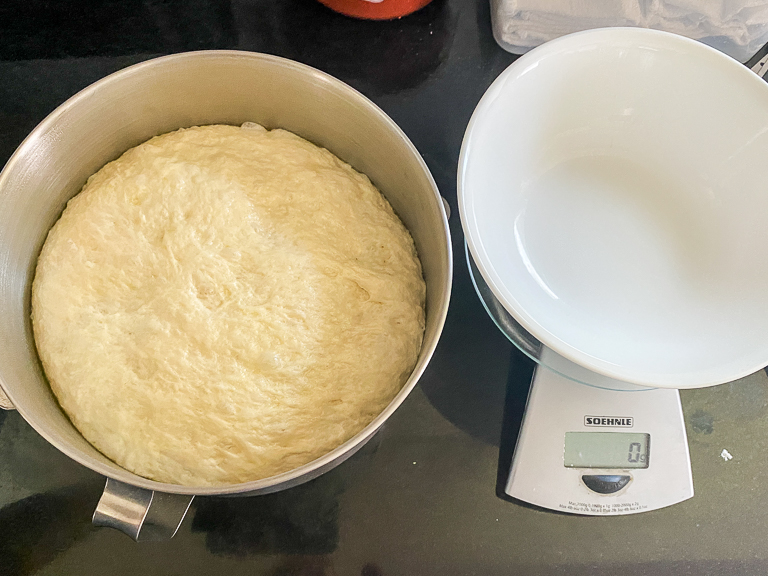 I weighed the dough and then used a pizza cutter to make 16 equal portions. 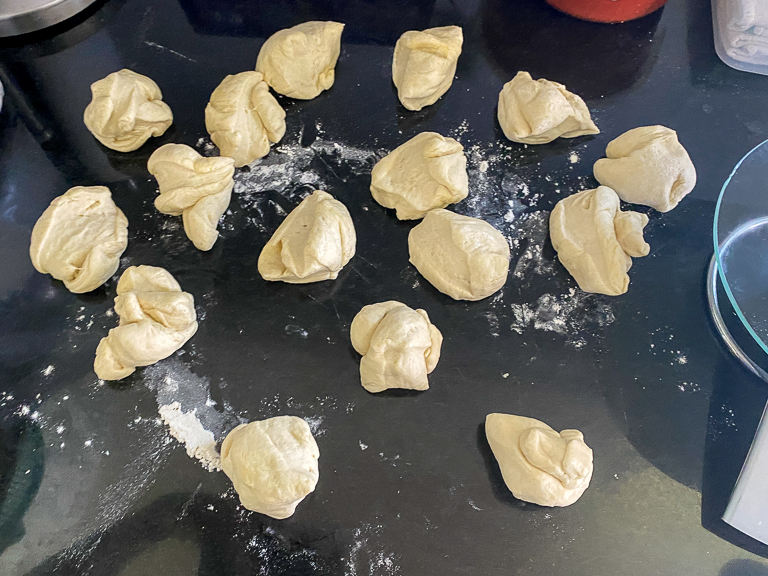 I rolled 16 snakes of dough and gave them just a couple minutes to relax and not become so elastic. 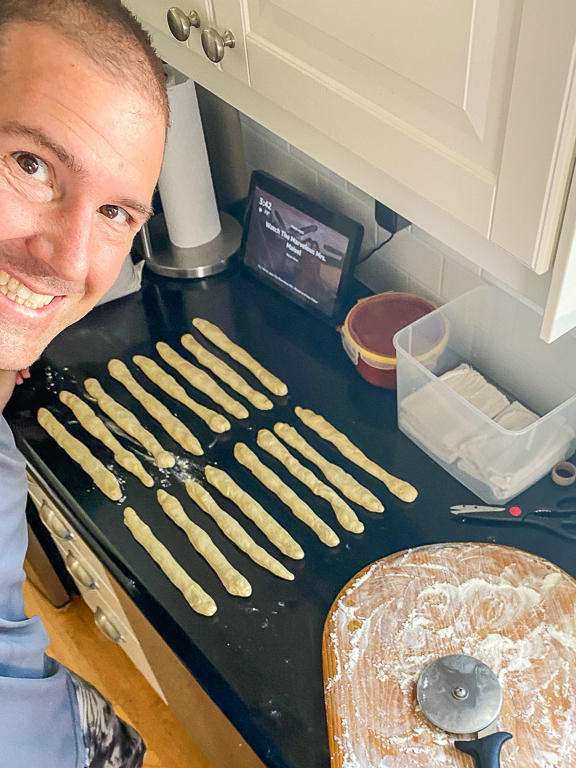 Next it was time to tie them into knots. Easy work, and I tucked the ends of each piece inwards so it wouldn't get done too fast. I probably overcrowded the cookie sheet, but I only have so much oven space. I've got a pizza stone on one rack and I need to bake these on the other. Already my temperatures are going to be off with these cooking at 400F and the pizzas wanting to cook at 550F. After giving then a second chance to rise for 45 minutes, these will go for about 18 minutes in the oven. 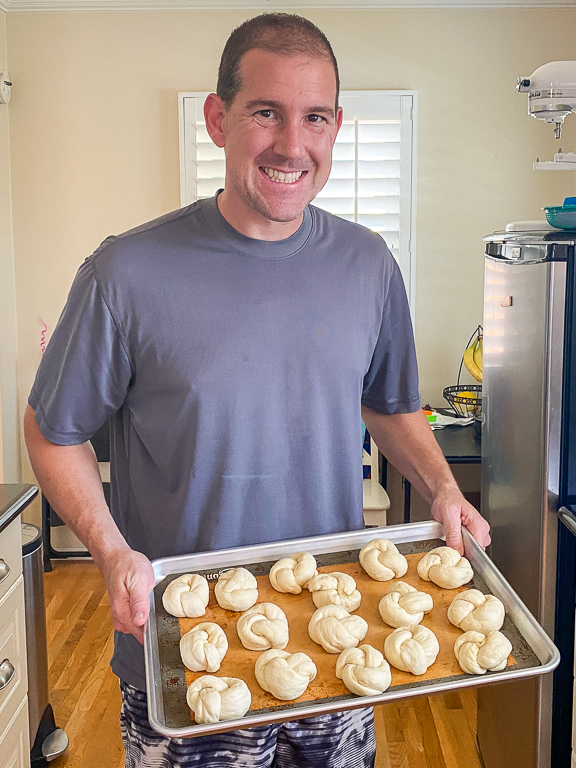 My NY crust came out of the fridge a bit earlier and has been coming up to room temperature. It's super soft and ready to shape. 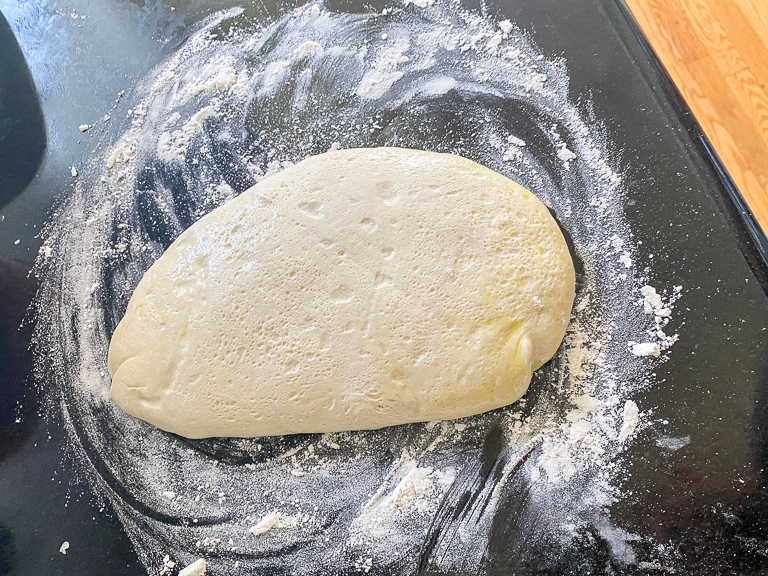 I pulled out my trusty pizza peel (seriously, I've had this for at least 15 years), and kept the toppings simple. Light on the sauce, easy cheese, and pepperoni for one, then pepperoni and ham for the other. 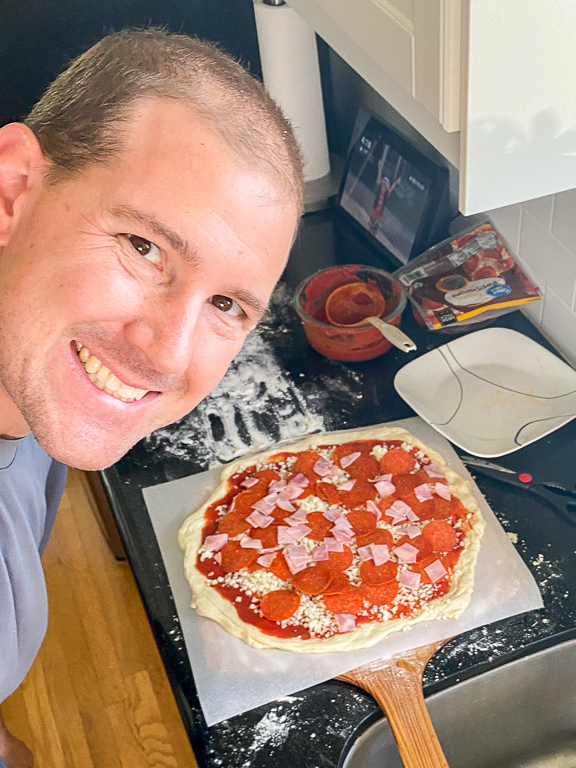 Alli was occupied, so it's just Ian and I getting our picture today. These look great! 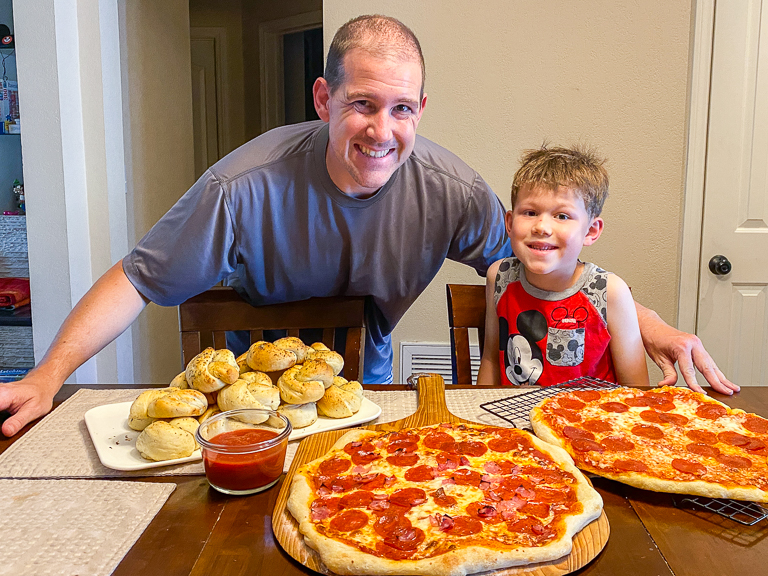 The pizza is thin with a crispy crust, but it's still foldable and chewy. 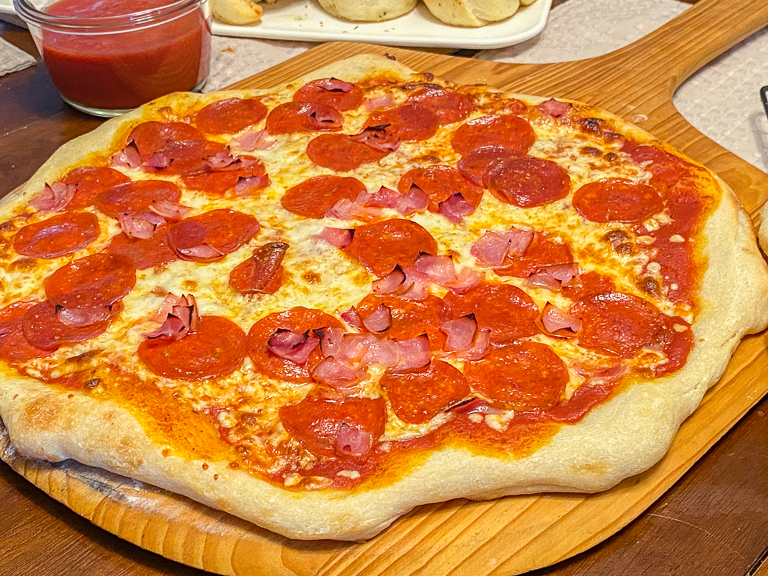 That pepperoni pizza looks almost exactly like the recipe. 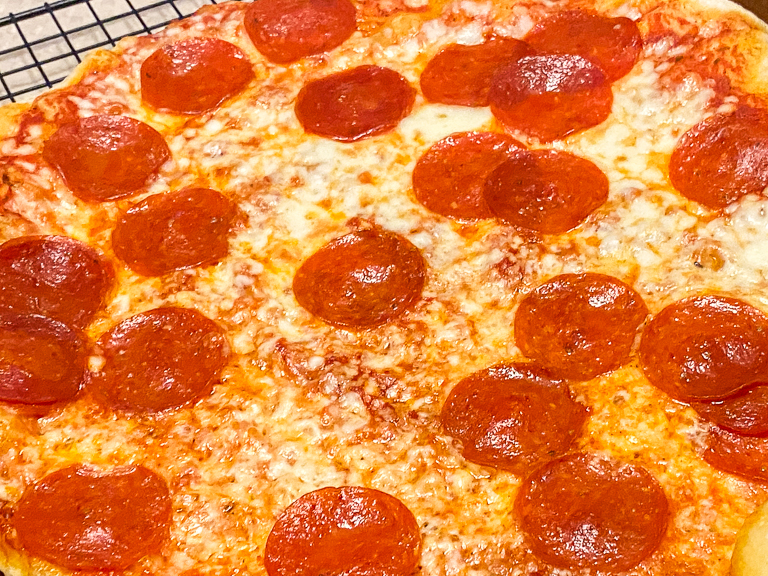 These garlic knots look and smell amazing! As they were cooking, Chi made her way to the kitchen, wondering what that great smell was. I brushed them with homemade garlic and herb butter before going into the oven, and then brushed them again after coming out. Marinara sauce is the perfect accompaniment for these. 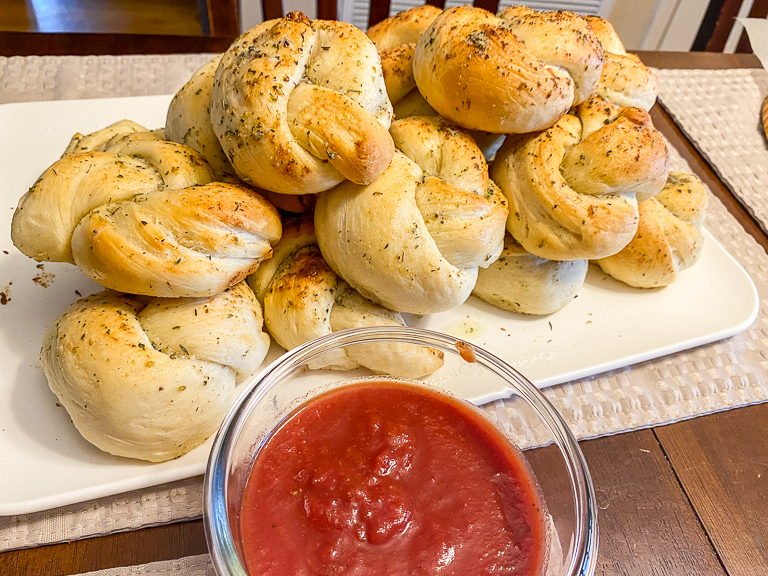 One characteristic of New York Pizza is that the slices are usually giant! I can only make ~14" with my pizza stone, but if I cut it just right I can get a couple really large slices out of it.
Now that's an Ian sized piece of pizza! 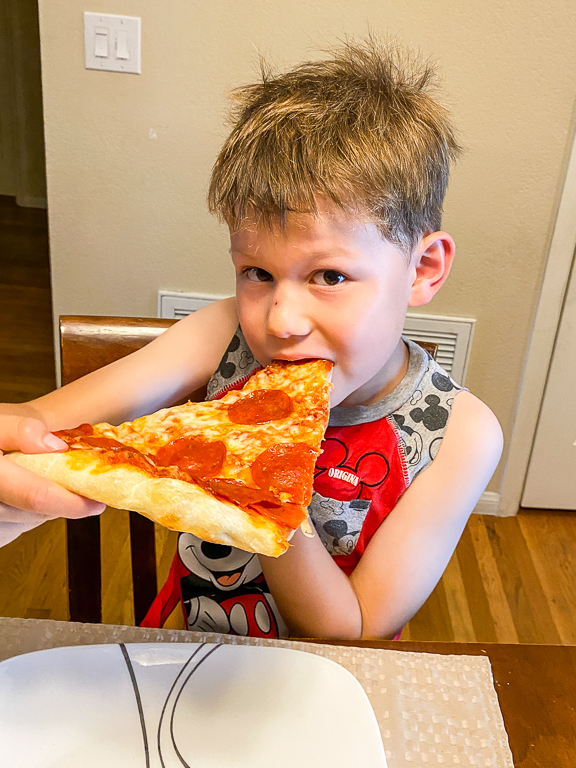 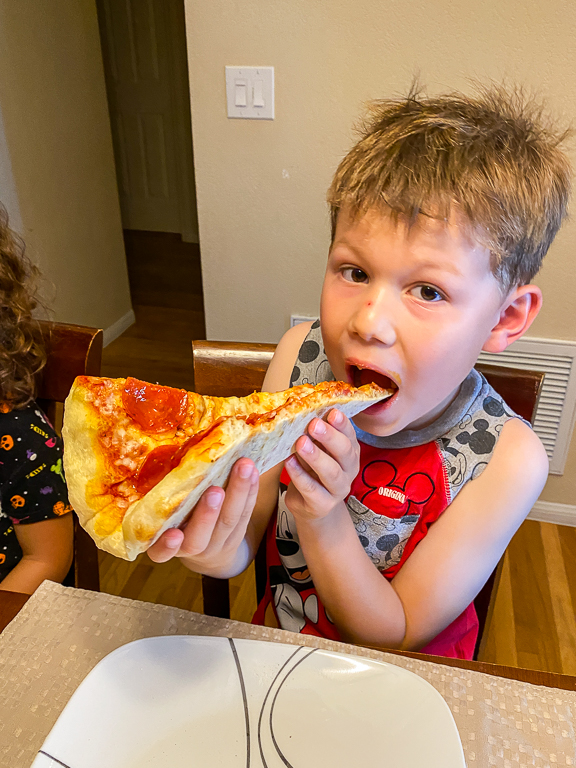 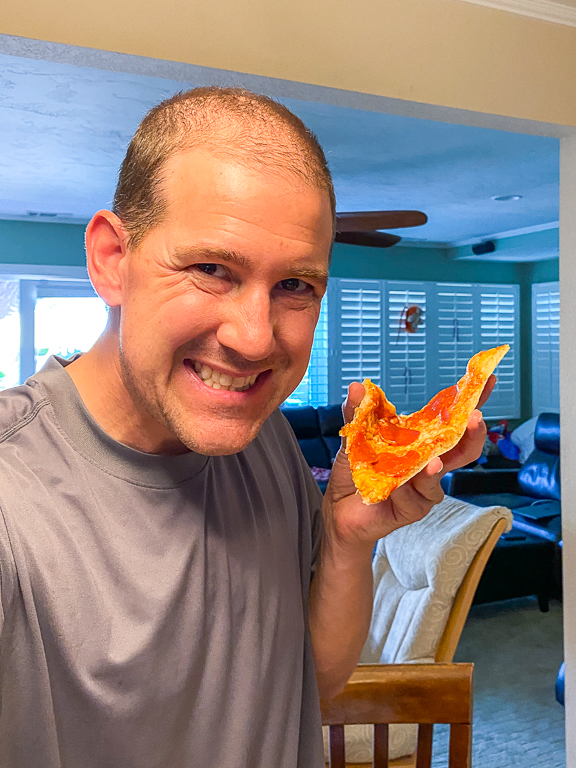 Here's my plate for tonight. 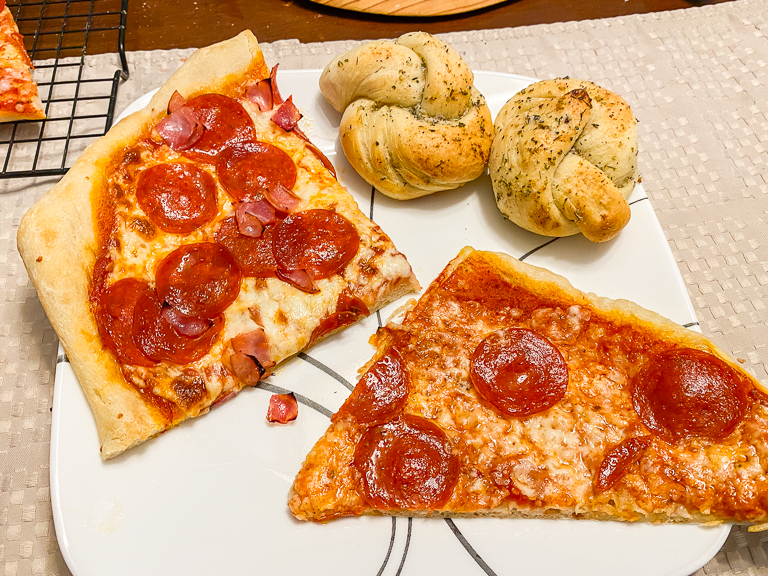 Those garlic knots are really tasty! Letting them have that second rise made them light and fluffy. 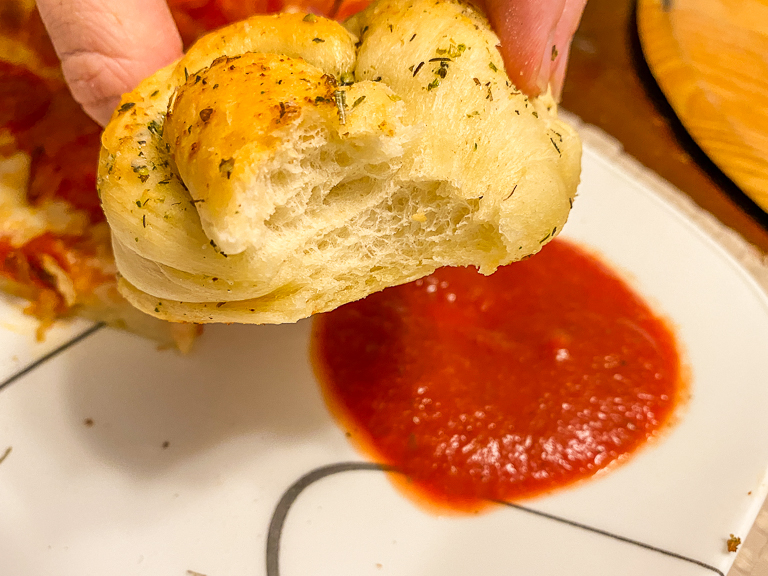 Theresa loves garlic knots and thought these were great! 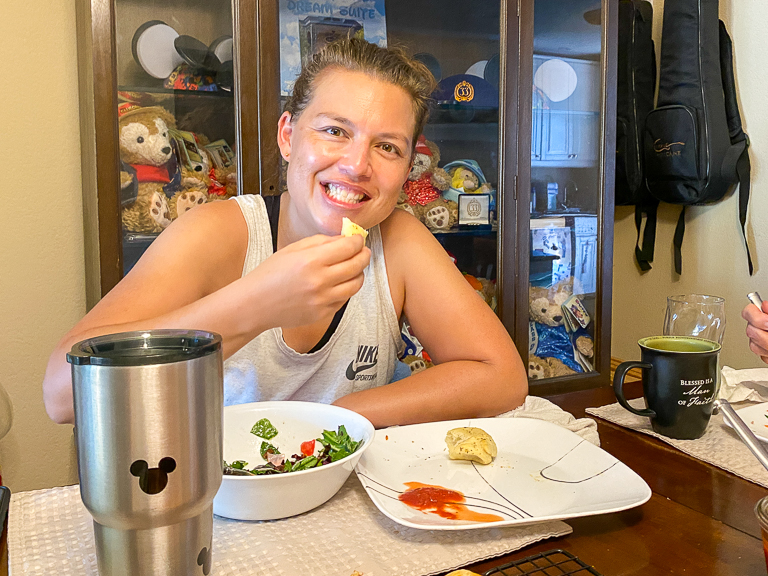 And Chi thinks they're even better than the pizza! Today I just might agree with her. The pizza is good, but the garlic knots are the star tonight! 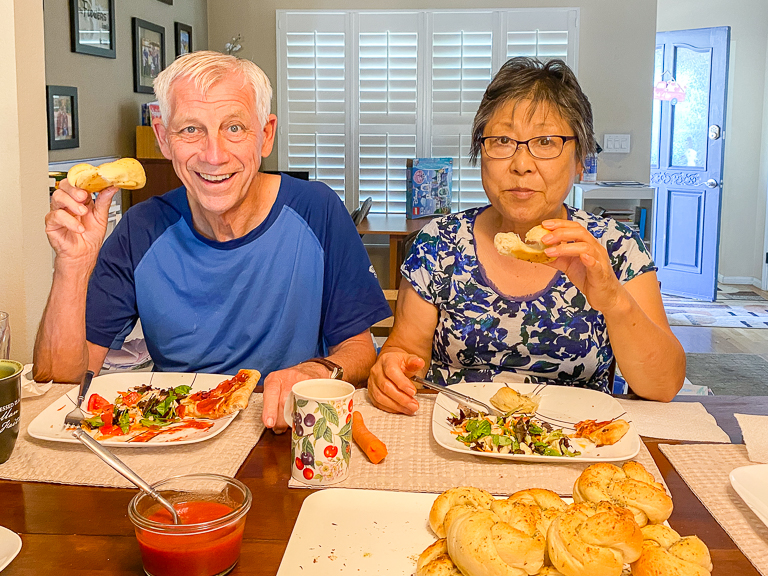