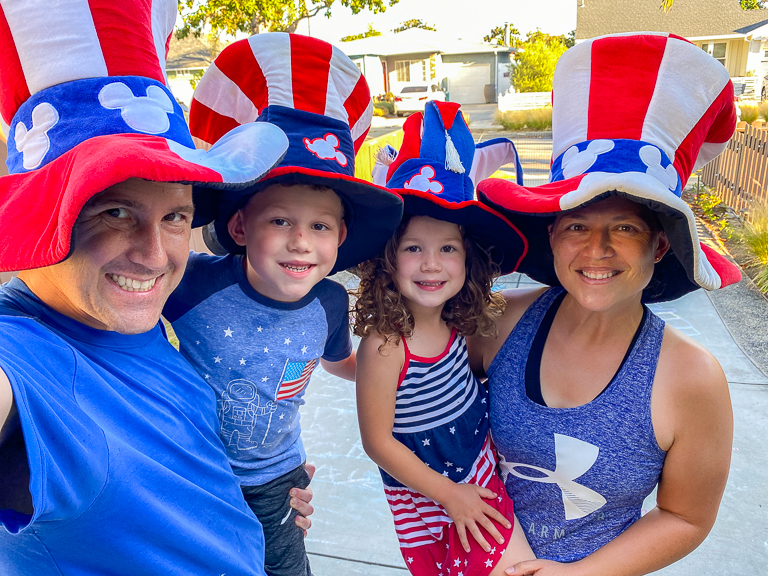 I saw this and thought it was funny. That could be a fun tradition. The kids wanted to do it as soon as I showed it to them. 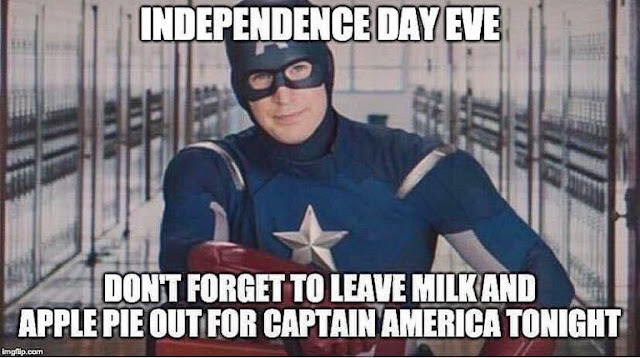 On July 4th, Alli had her outfit totally picked out. This girl likes to match whatever the theme of the day is, and she knows what all the clothes she has have on them. Grammy and Gram have fun fabrics, so Alli has flag hair scrunchies and a colorful star wristband. 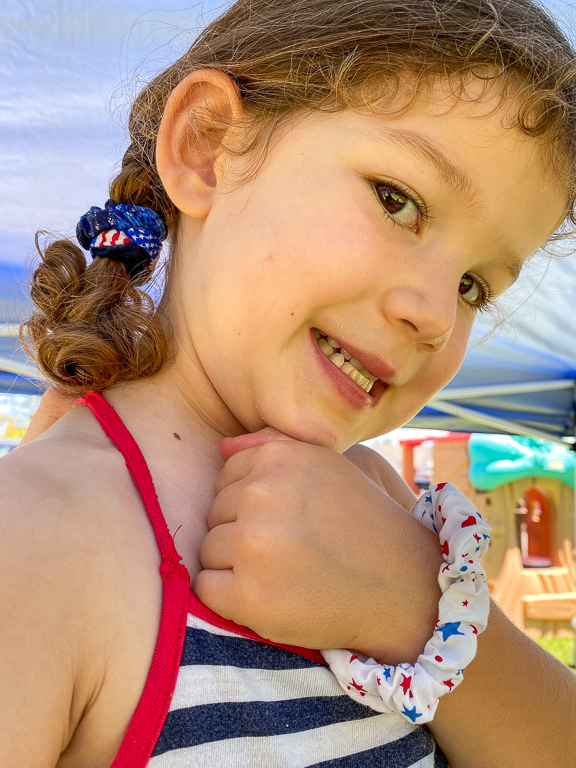 Ian picked a shirt that's totally in character for him. Something with space, but also an American flag on it. Duffy is looking patriotic today too. 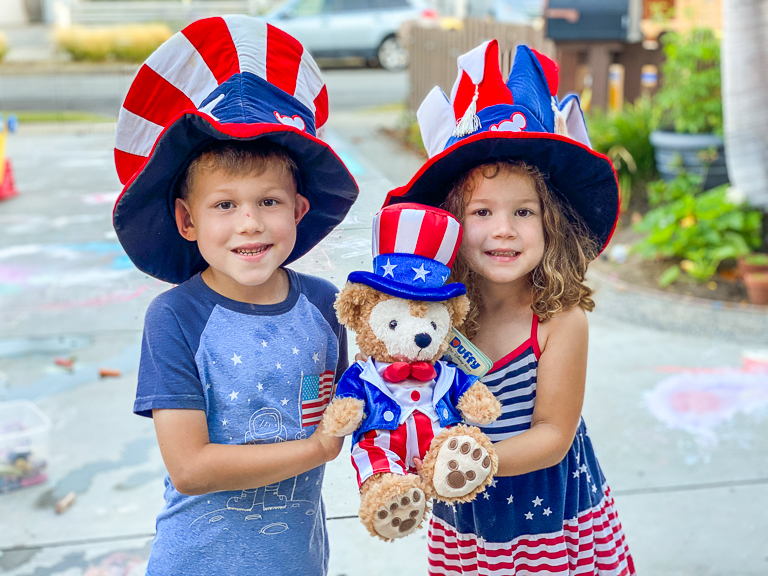 Grammy split a watermelon for everyone to enjoy. She said it's the tastiest of the season so far. 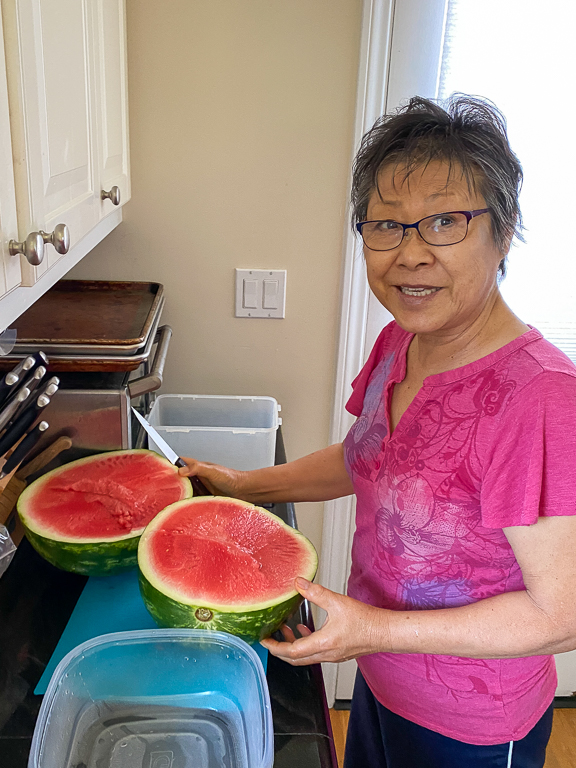 Before it gets too hot today, we're going to take a morning bike ride. Got to pick out a patriotic mask. 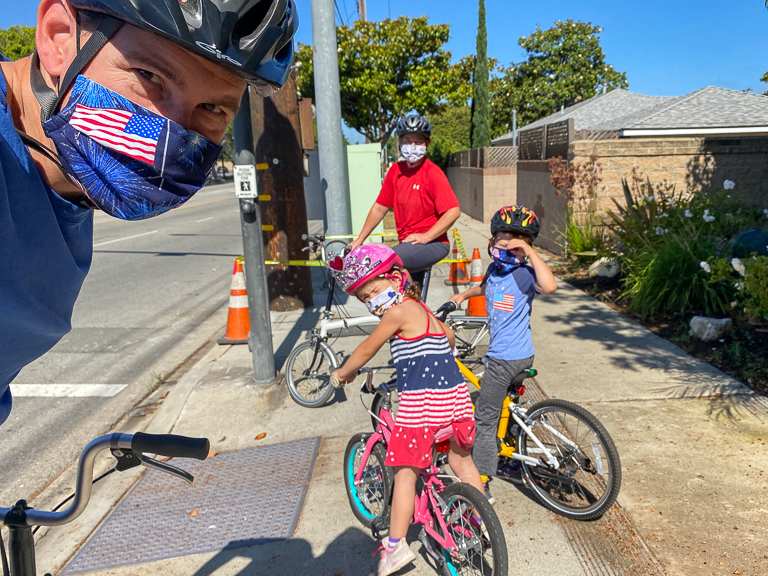 The weather was gorgeous out today. Blue skies, warm temperatures. 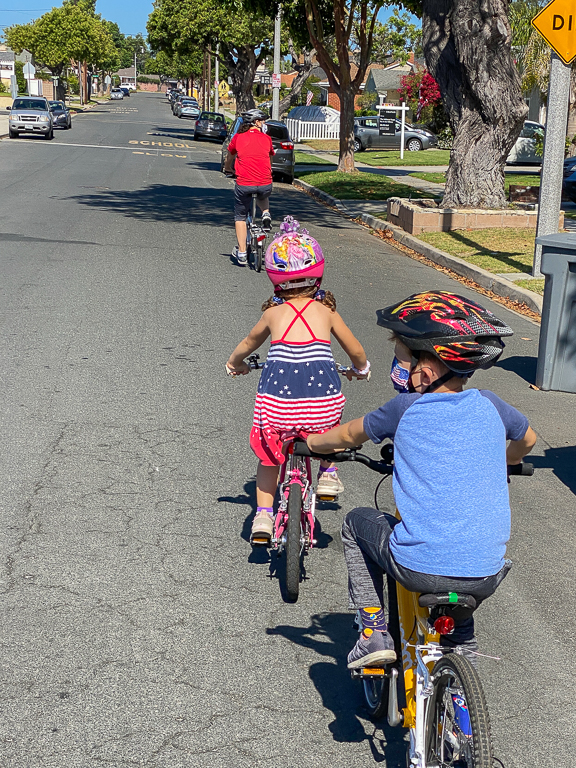 Perfect weather for relaxing in the front yard. Theresa and I pulled out our portable hammocks and the pop-up tent and we all hung out together. 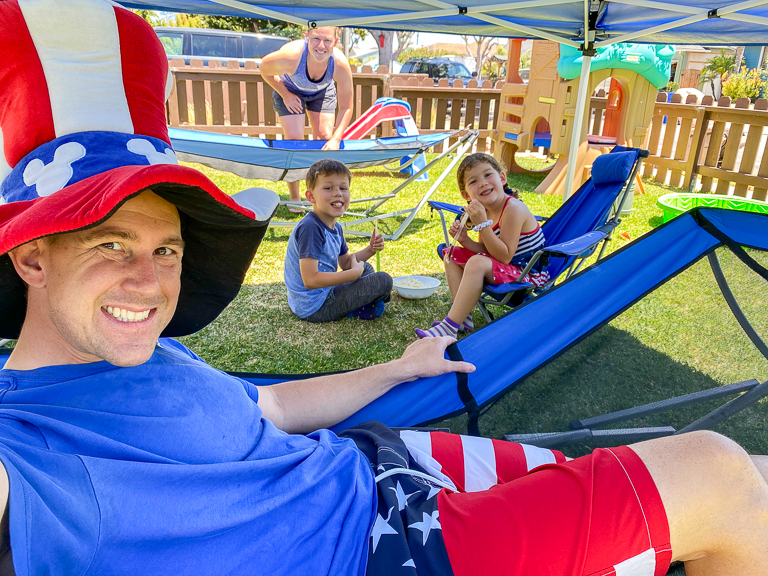 But bike rides make me thirsty. How about a red, white, and blue smoothie? 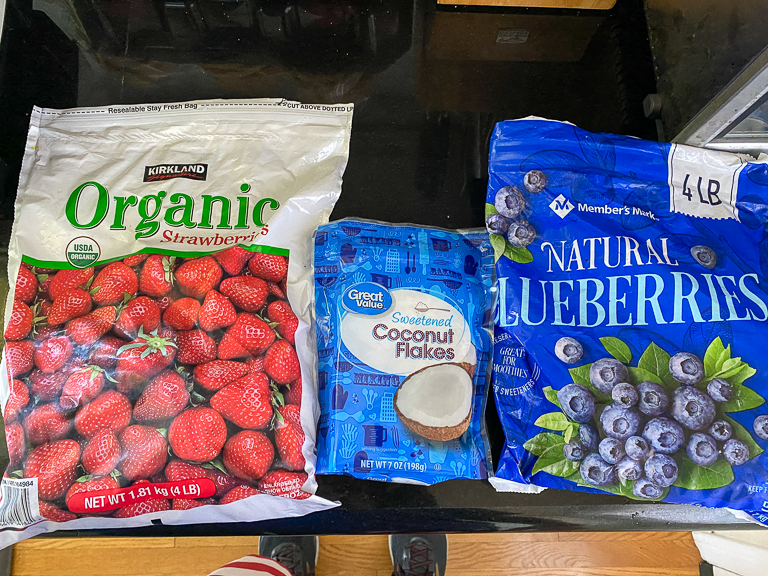 Made from Strawberries, Coconut, and Blueberries. 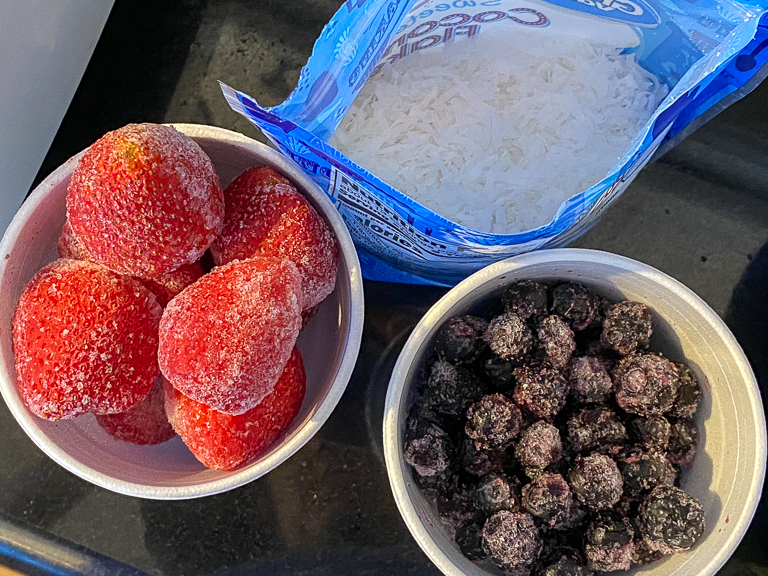 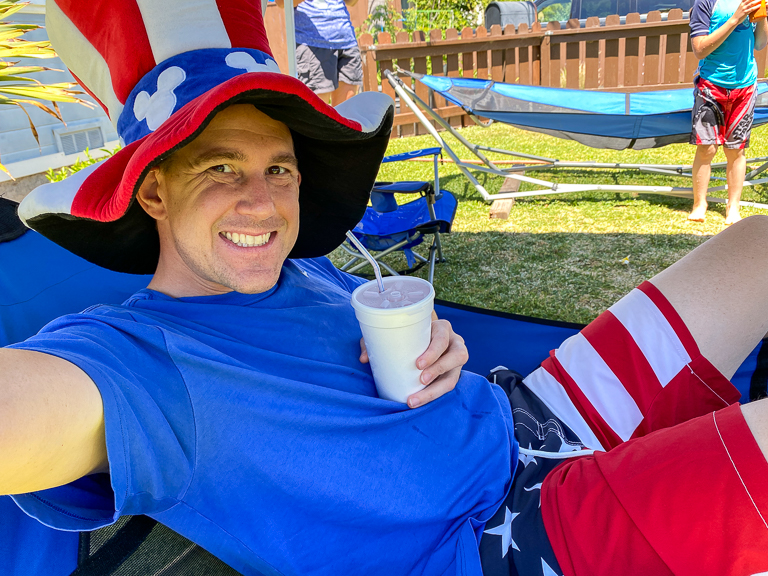 The day was spent hanging out together. More on that in future posts.
As I write this at night on July 4th, there's a crazy amount of fireworks going off outside. Earlier in the day, the kids got to play with those classic poppers to celebrate. 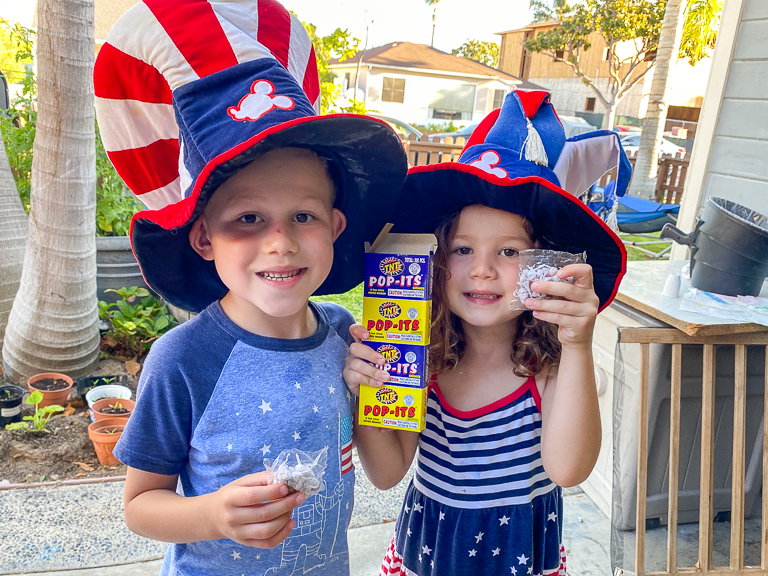 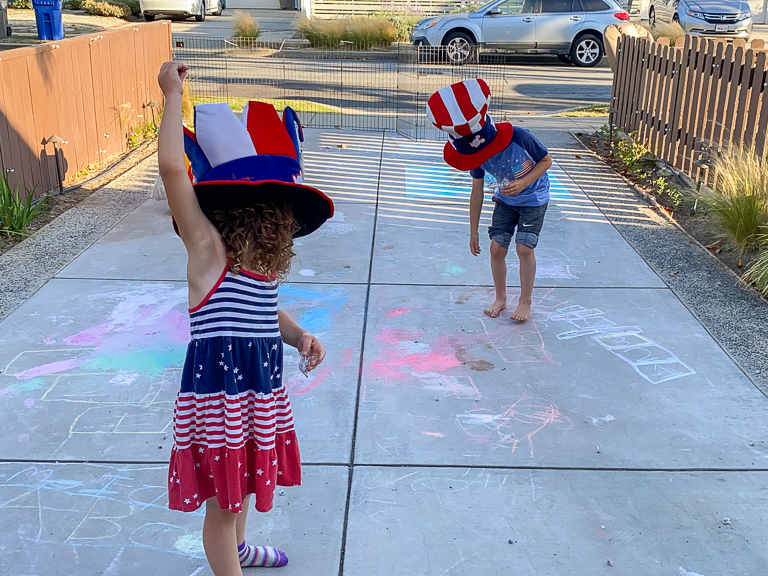 Oh wow, that's an even bigger wind-up. She's jumping to get a good throw. 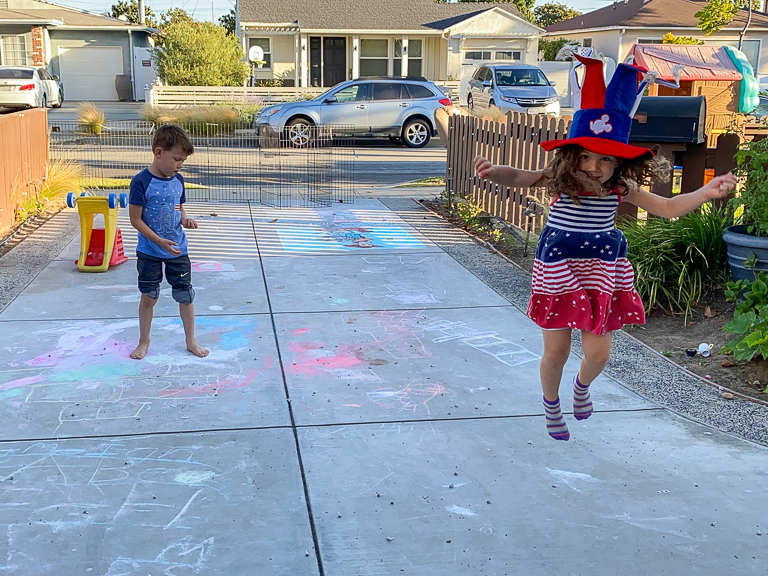 And then she started doing something else crazy.

The kids have been chalking up the driveway like crazy with all time we're spending in the front yard. They started by drawing the word "LOVE" at the bottom. Ian did a Spider-Man O because he thought people would like it. Then Alli made the V Green and Red Christmas colors. And then they just started drawing all sorts of holidays, saying they wanted to make everyone who saw it happy.
For July 4th, they drew stripes, and made sure to do 50 marks for the stars. And Ian wrote "Amarica is Great".
I love the little heart parade for Valentines Day. And that's a giant egg for the Easter Bunny! 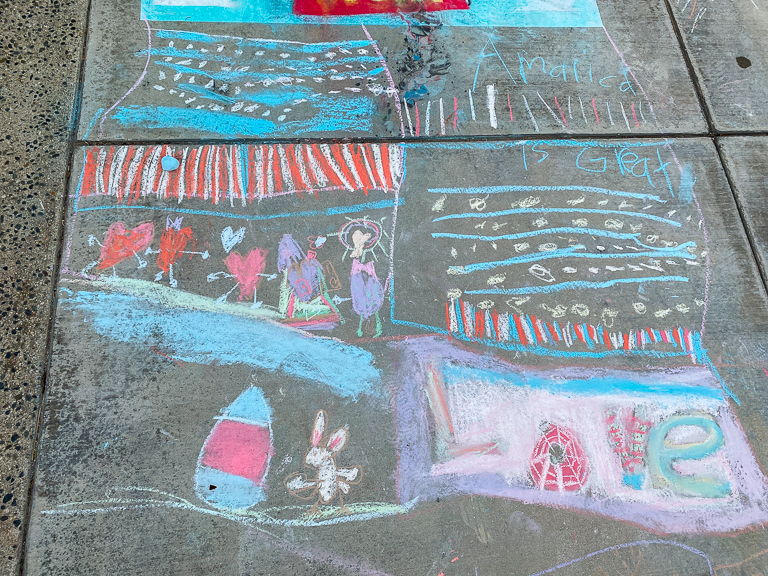 As we were winding down our evening, just watching them draw, Ian invited us to come joint them. Sure! Why not! 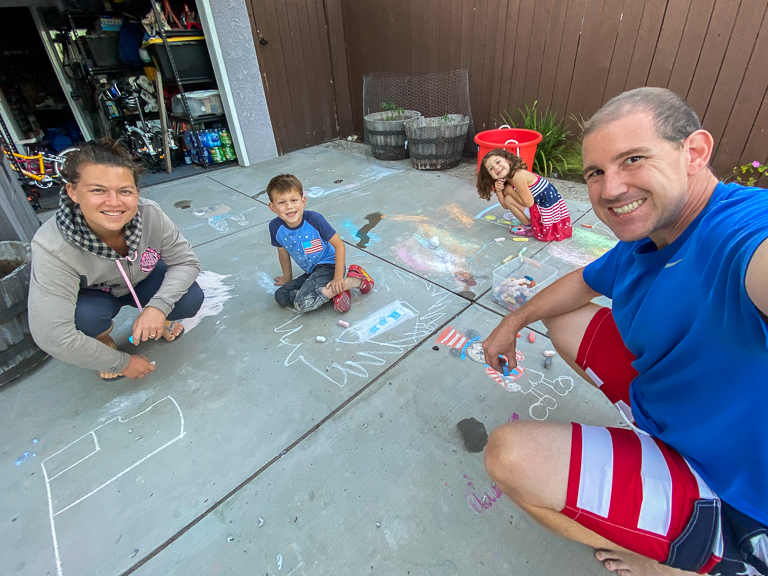 Alli loves to draw pictures of our family. 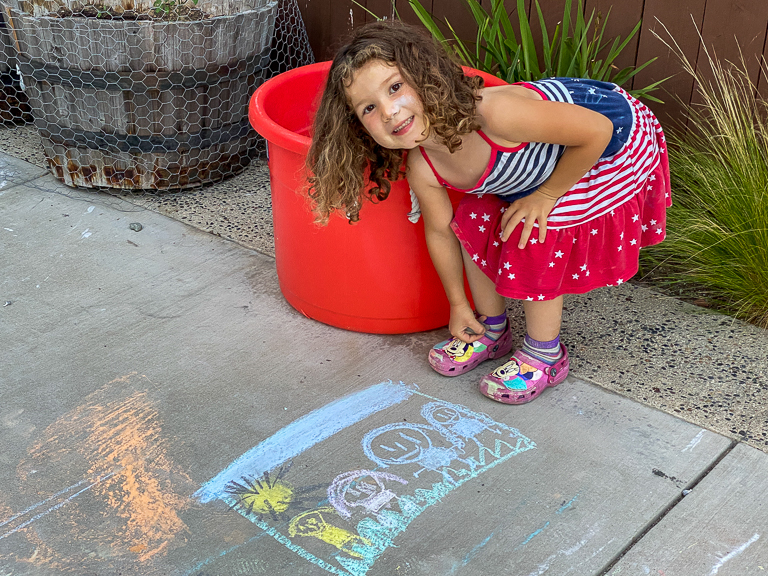 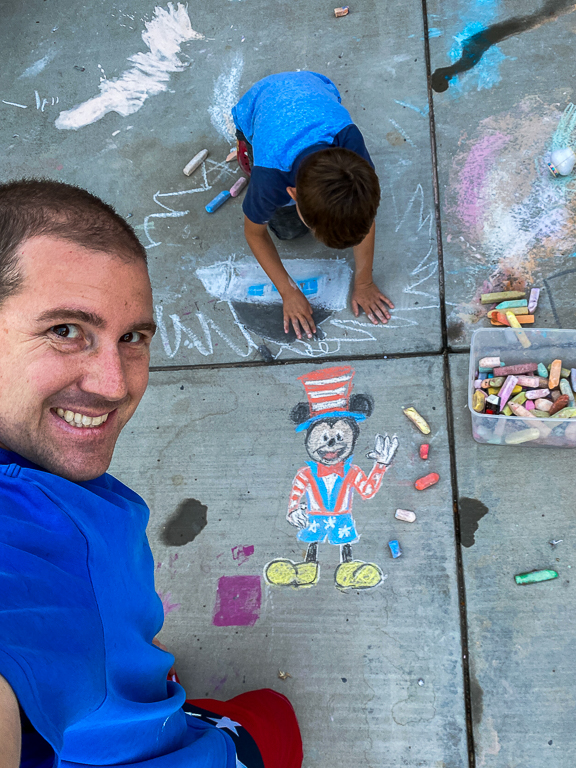 Ian said he wasn't going to draw anything with bright colors that popped, because of COVID. He drew a house with black and white grass. 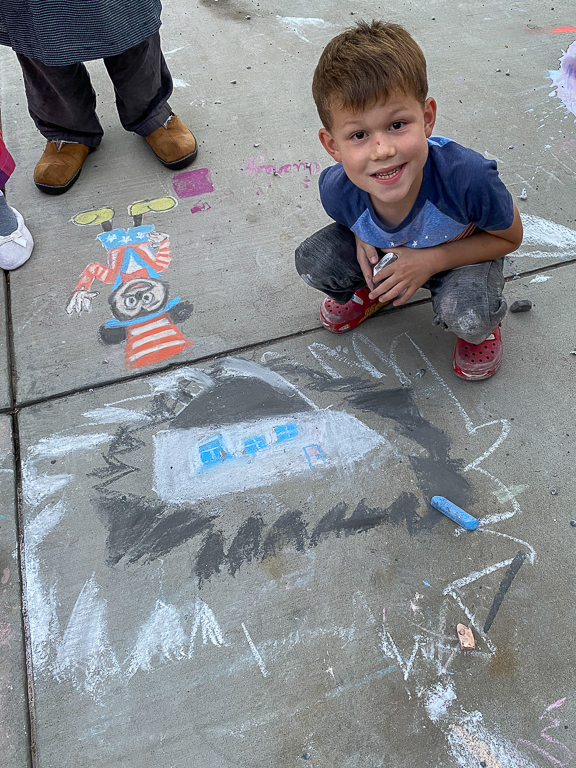 Alli ran back to get Grammy and Grandpa so she could draw them too.
Alli - Grandpa, you're wearing all black, but you're got white hair. And Grammy, you're wearing blue. 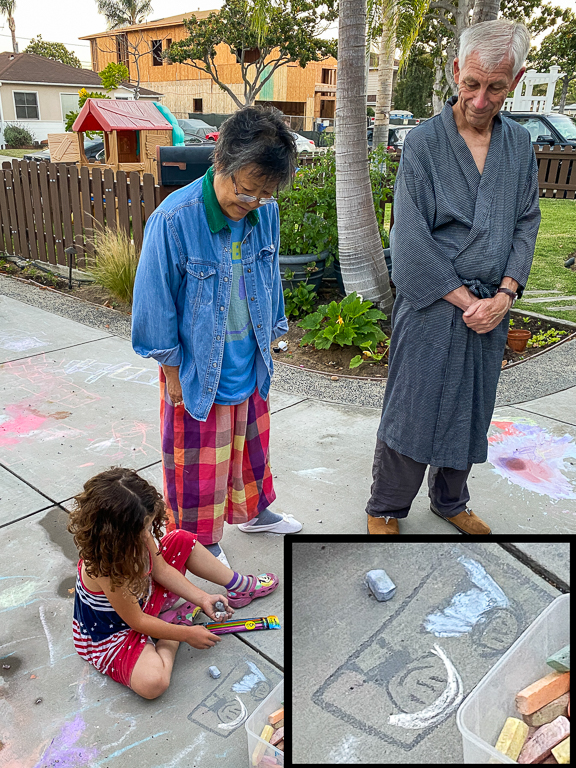 Very nice Theresa. The right number of stars and stripes! 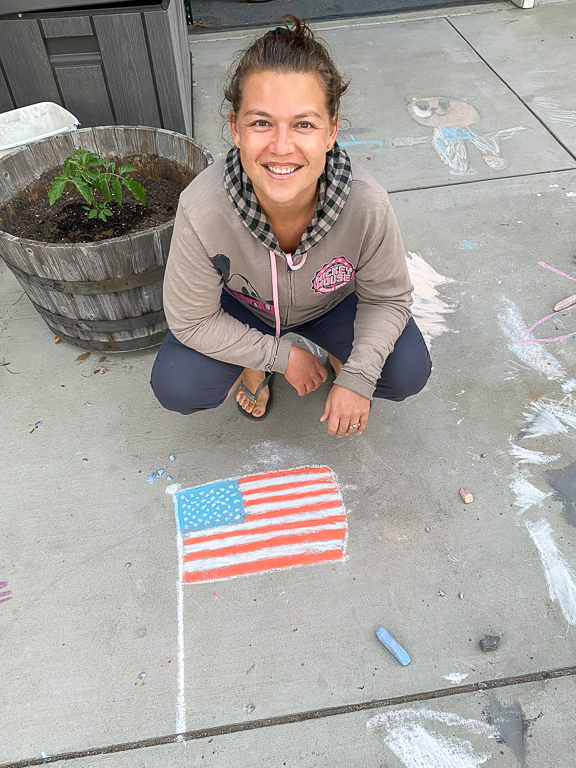 Ha, we can pretend to hold it. 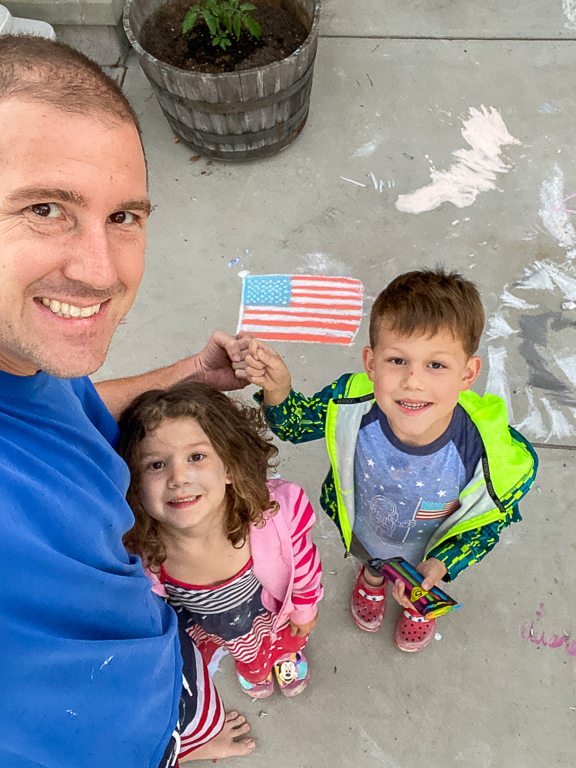 We're letting the kids stay up past their bedtime tonight. Ian was wanting to watch the sunset. So artist Alli decided to draw a picture of him watching the sunset. 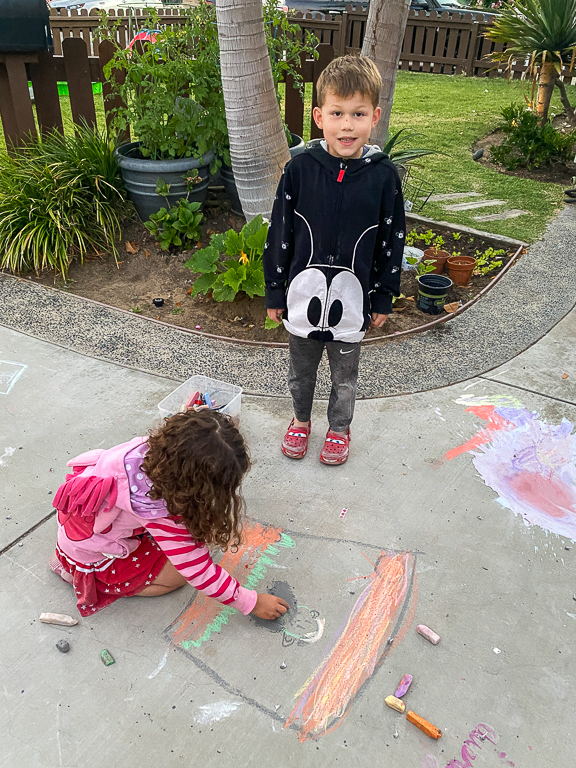 Pretty good Alli! Orange sky for the sunset. And that's Ian's jacket, jacket pattern, and red shoes too! I love it! 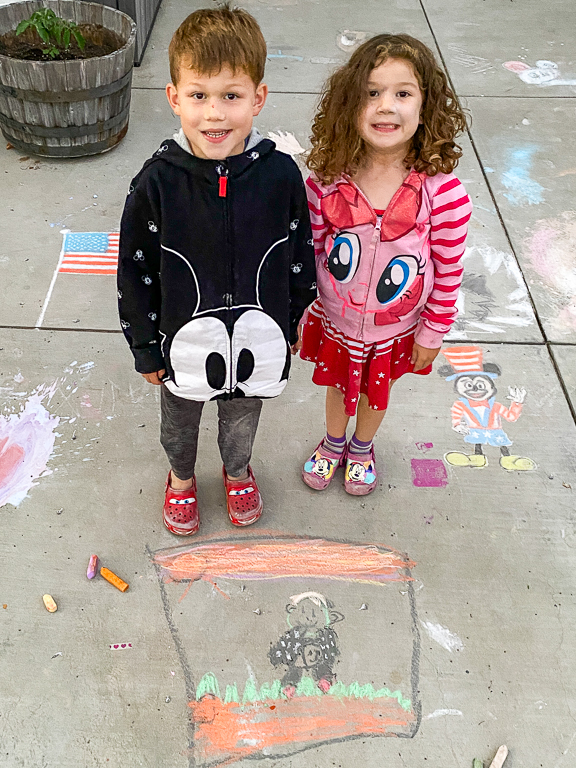 For a final treat of the night, in lieu of any more fireworks, we pulled out some glow-sticks. 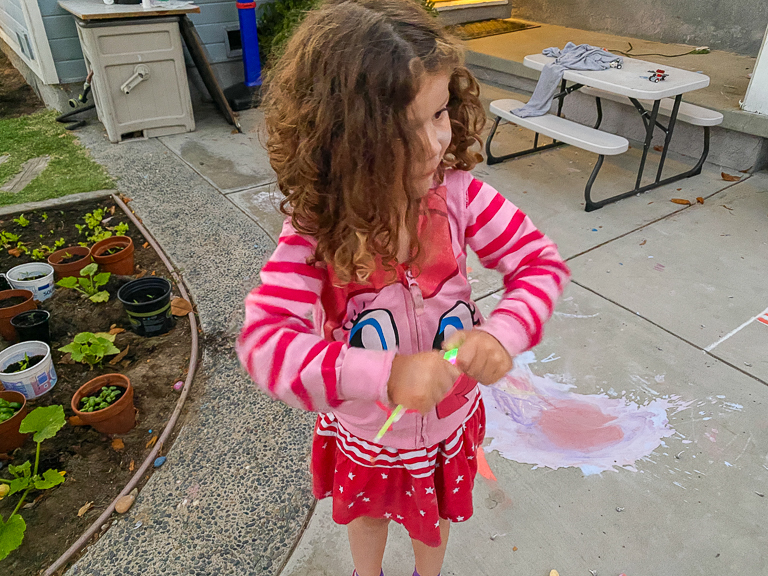 Alli quickly traded Ian for his pink and purple ones. And after running around outside for a little while, the fun went inside. 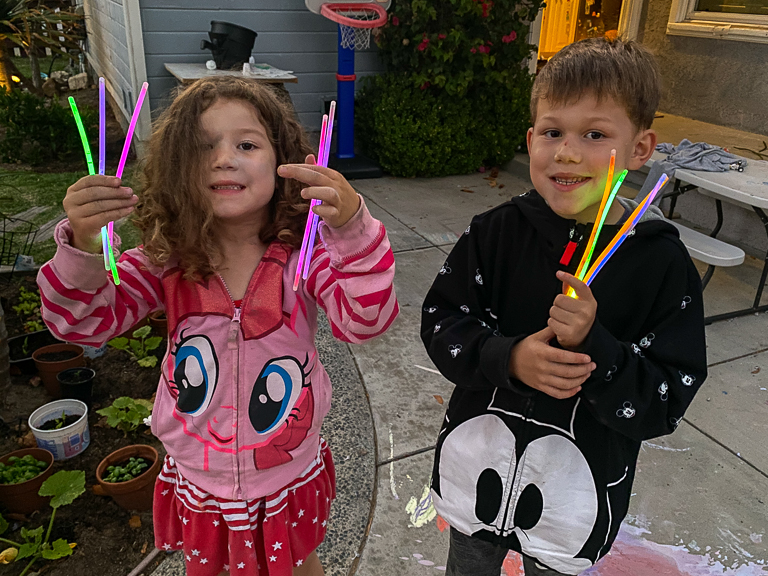 The four of us played hide-and-seek in the dark, follow-the-leader around the house in the dark, and watched fireworks from our back porch. 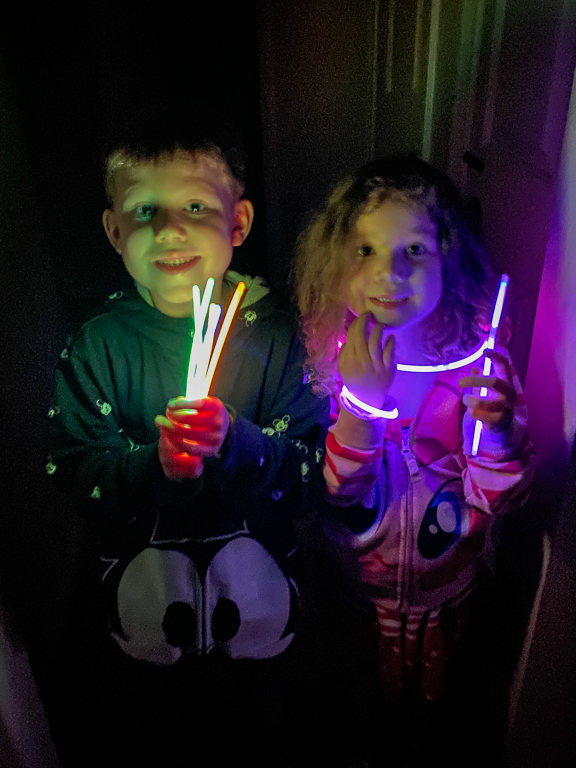 The all four of us went to the kids' Haunted Mansion and we all played 20 questions with Disney Characters. I started us off.
My character was a male, tall. (Alli immediately guessed Hercules). Good guess, but not this time. He is strong. He's in a Disney movie. Doesn't have a ride at the parks. Somehow Theresa asked if he liked breakfast foods, and yes, he does. Why, when he was a lad, he ate 4 dozen eggs. Alli - GASTON! Right you are Alli! Good guesser! Your turn!
Alli's character is a girl. She's in a Disney movie. She has a ride at the parks. It's not Ariel. She's not a princess. Hair color, black - no, blonde - no, brown - no, red - no. No? Didn't we just name all the hair colors? What about green hair? Yes! Is she friends with Joy - maybe. Ian - DISGUST! Right! That was a good one Alli!
Ian's turn. It's a boy. It's an animal. From a Disney movie. Doesn't live on land, ooh that narrows it down. He's not red. Mommy guessed Flounder and was right!
Alright mommy, your turn. It's a boy. Lives on land. Animal. Small. No hair. I guessed Mushu but was wrong. Friends with a princess. Hmm, no to Snow White, Cinderella, Aurora, Moana, Merida, Ariel, Jasmine, Mulan, Elsa, or Anna. What princess are we missing? We tried to figure out color, but all we got back was "most of the time he's not those colors". Ah-ha! Ian knows who it is, but can't remember his name! Alli wanted to run off and grab her princess book. I asked if his name started with a P. That helped. Ian - Pascal! Right you are! 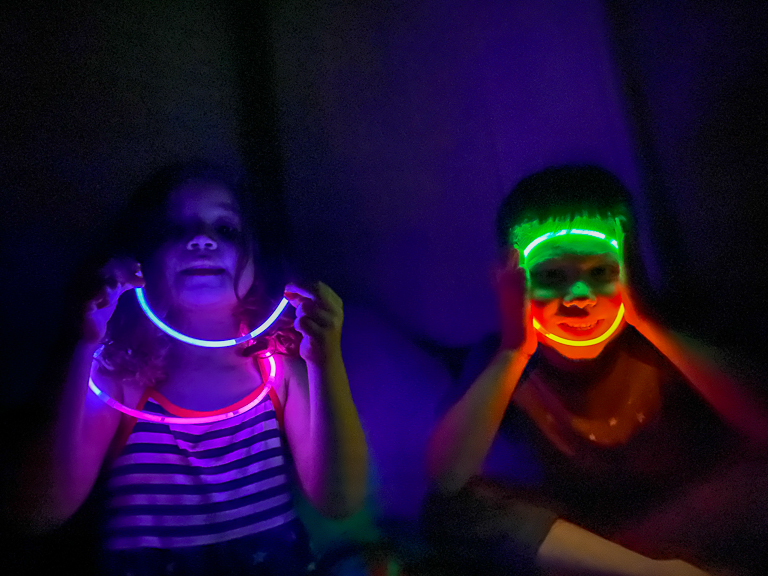 It was a fun day hanging out together (even though that's pretty much all we do these days!). Happy July 4th!
Posted by Joe at 8:00 PM