Today we've got a tasty treat planned. In coming up with the ideas for all these "Make at Home" meals, there's one thing that Theresa was really wanting, but we were having a hard time deciding what to make along with it.
Texas Roadhouse makes fine food, but there's only one thing that is a real standout and you won't even find it on the menu. It's their fresh, piping hot from their oven to your table sweet rolls! These unlimited rolls come free with your meal and their Theresa's favorite! She will order a small entree and have 4-5 of these delicious breads.
And so not really inspired to make any of Texas Roadhouse's steaks, chicken, or sides, we're just making their rolls! 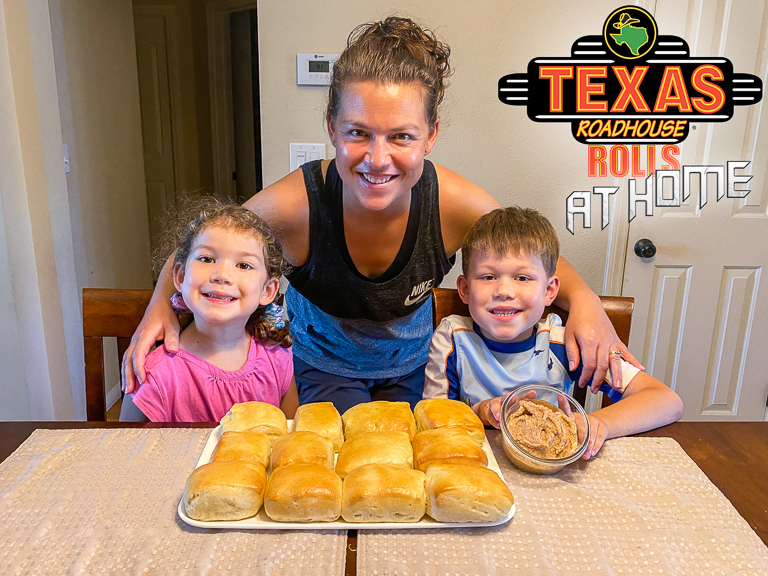 And because they're going to be special for Theresa, I'm making it all up myself today. For the recipe, I'm using this one for Texas Roadhouse Rolls from jocooks.com.
The ingredients are all pretty typical. Flour, sugar, butter, yeast, eggs, and the like. Wait a second, hey Theresa, this recipe says it makes 30-35 rolls!
Theresa - Yes! Make that! 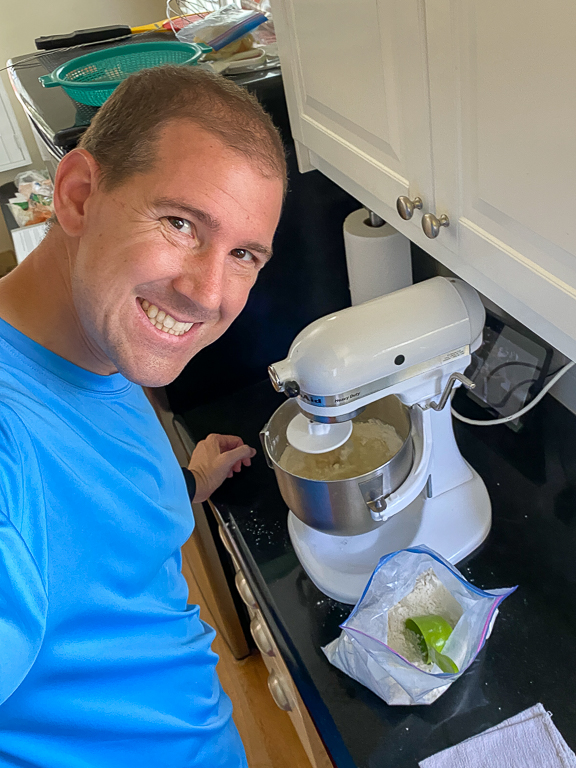 One ingredient I don't remember ever seeing before is scalded milk. According to wikipedia, this is done to kill off any stray bacteria that pasteurization might not have caught along with any wild yeast that might be present. Not doing this step might allow these to alter the flavor of the final product. Learn something new every day. I was stirring it constantly and I caught it just before it was able to boil over. I was quick to move it over the sink, and luckily nothing spilled. Whew!
Everything went into the mixer (which has been so great to have) and the dough came together. Because of the volume, it went into two oiled bowls and was set aside to rise. 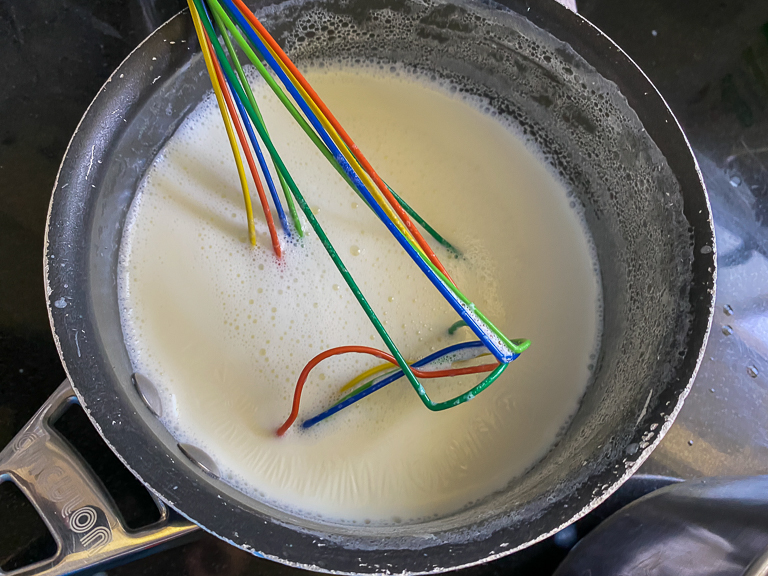 There's one other thing that we've got to make for this to be like Texas Roadhouse. Along with the rolls, they always bring out a container of Cinnamon Honey Butter. Luckily the recipe for that is also found at jocooks.com. Just 4 ingredients - softened butter, cinnamon, honey, and powdered sugar. 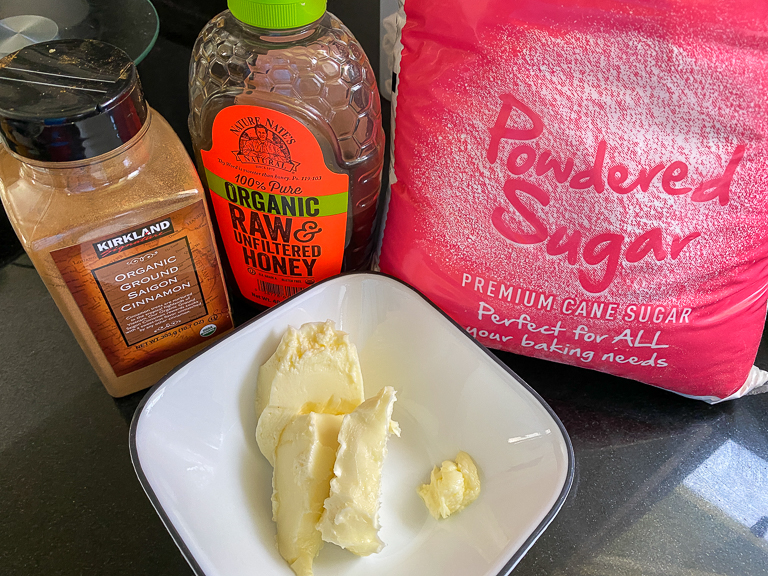 Alli was close enough to hear me call for "who wants to lick the spoon". Gotta be quieter next time I suppose. I did get to try some from the container I mixed it all in though and it was delicious. 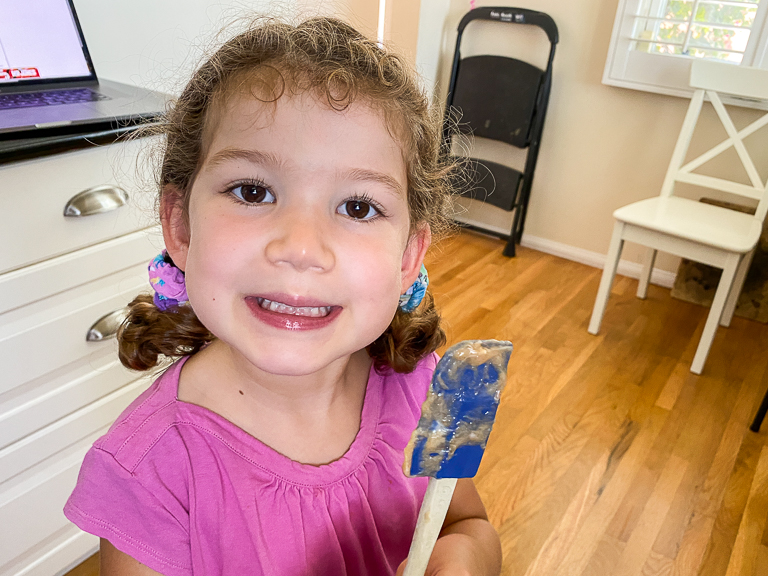 After a little over an hour, the dough is super fluffy. It's a shame I've got to roll those air bubbles out. 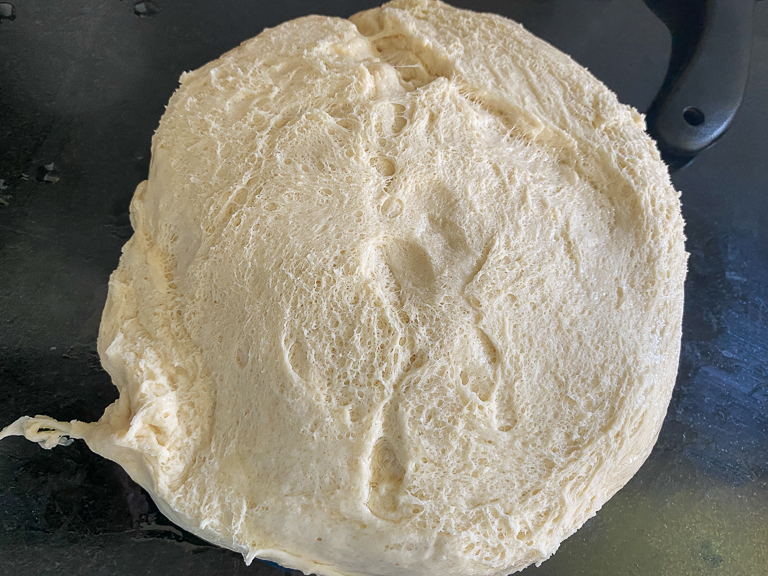 I rolled it into a square and used a pizza cutter to cut our my square rolls. 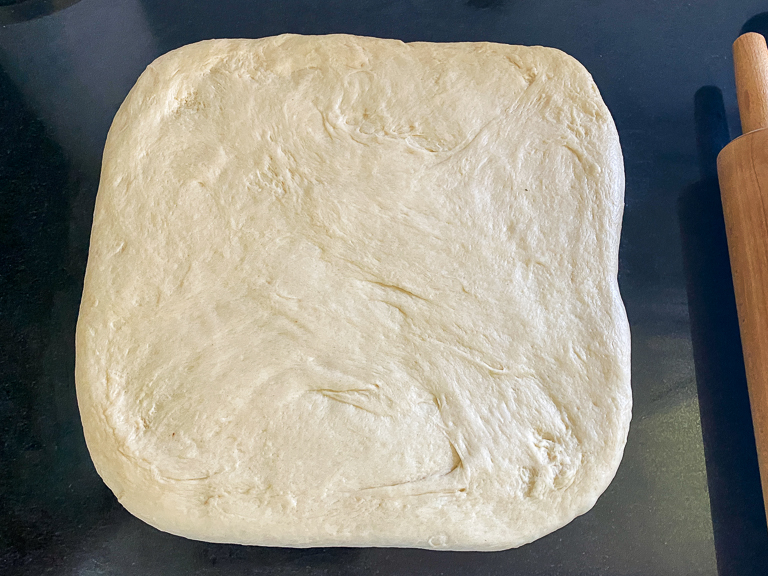 I thought I got the size about right, but these are puffing up quite a bit. I think in my mind, I'm cutting out their approximate final size, but I need to cut their pre-risen and pre-baked size. Oh well. These rolls will just be extra large. I covered them a second time and let them rise for another 30 minutes. 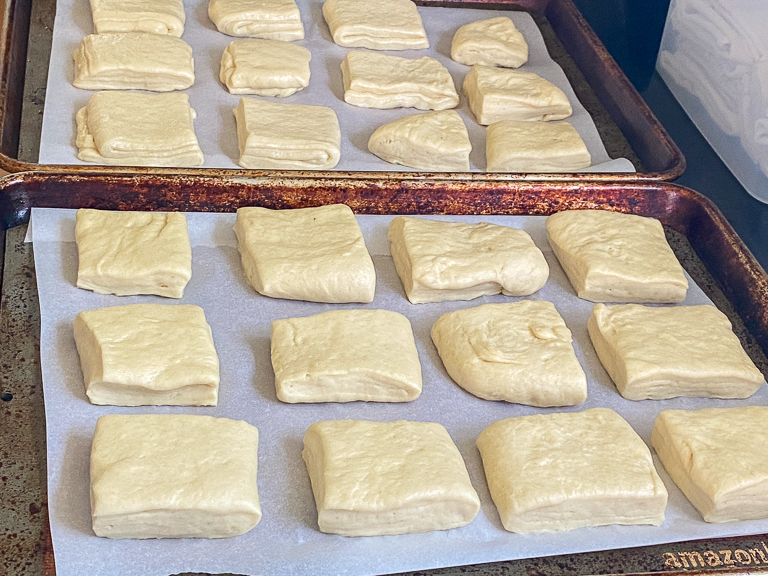 After that, they went into a 350F oven for about 18 minutes. Coming out, the tops are nicely browned. There's just one thing that's missing. 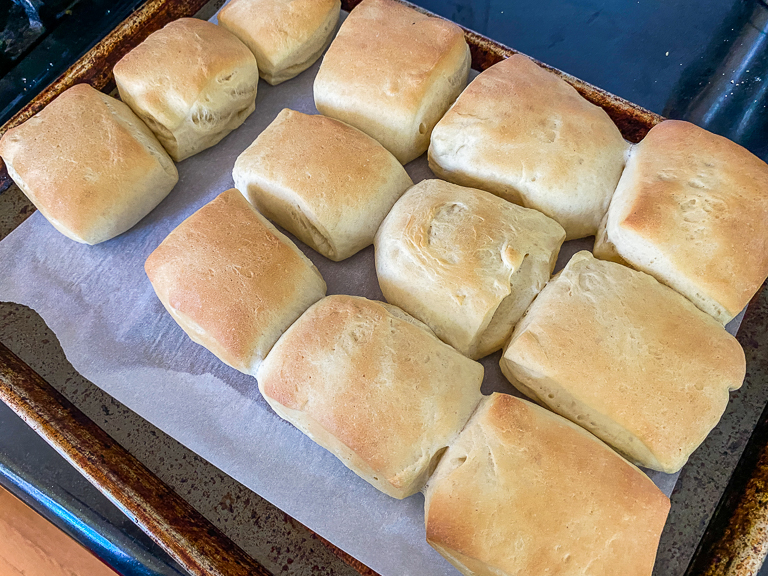 These need a coating of melted butter! There's that shiny gloss that I'm used to seeing (and feeling) on these rolls. 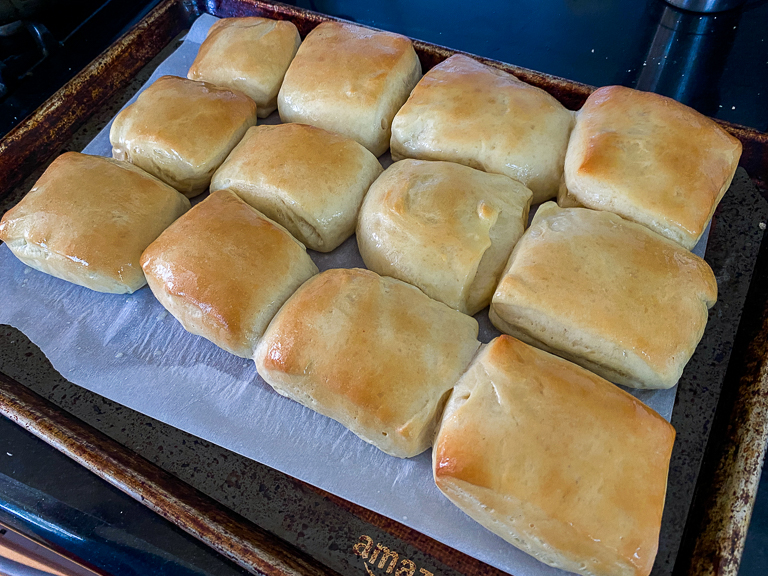 Theresa was certainly excited. As I was working in the kitchen, she'd be looking in the oven and repeating things like "these are going to be so good", "these are my favorite rolls in the world", and "I was thinking about eating some vegetable soup for dinner, but no, I'm going to save room for the rolls". 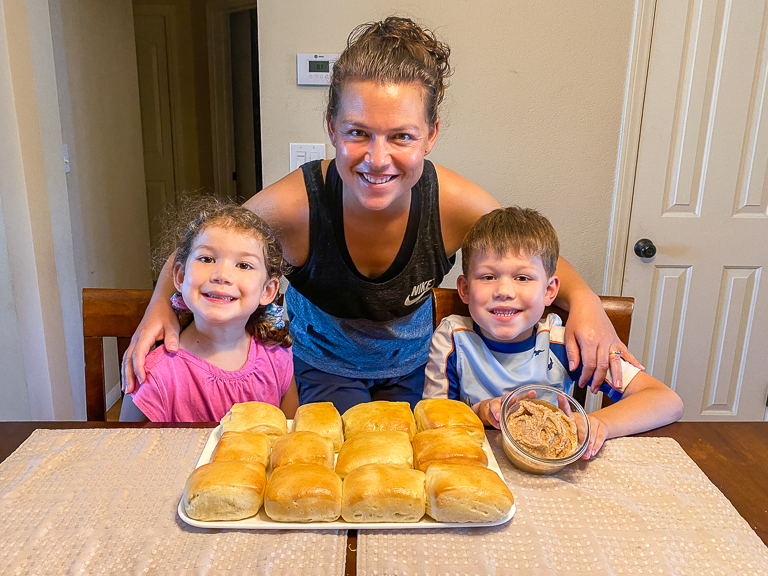 I probably should have whipped that cinnamon honey butter, but it's still going to be tasty. 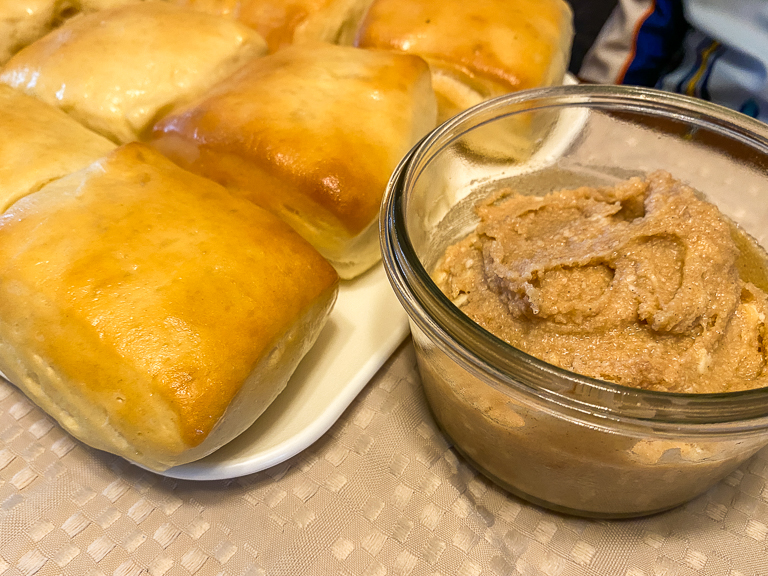 Spreading the butter on the rolls and taking my first bite... oh yes. These are delicious. And I immediately think of Texas Roadhouse. The rolls are light and fluffy. The butter cinnamon honey mixture is perfect. I think I've found a great recipe any time we need a bread with a fancy meal. 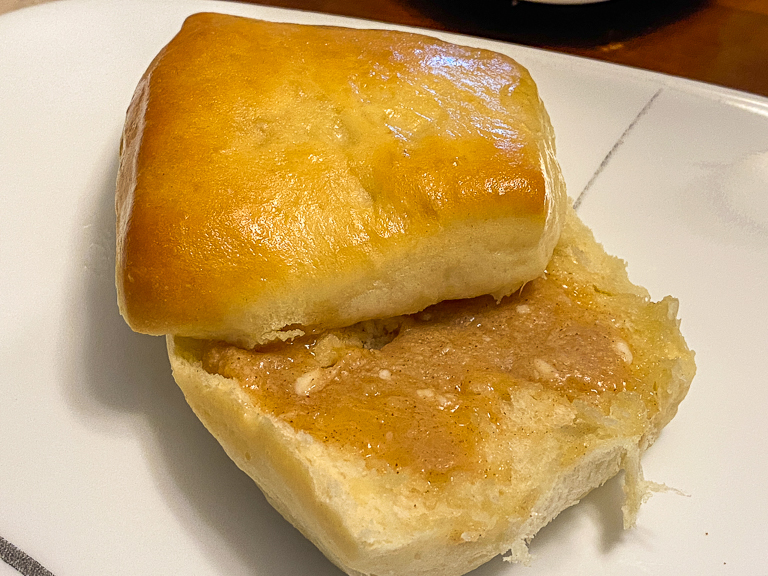 Theresa thought the rolls were really good and the flavor was spot on. My cinnamon honey butter she thought tasted even better than the one they serve. She said that she's satisfied with these, and now that we've done better than Texas Roadhouse, we don't need to go back again to get rolls. 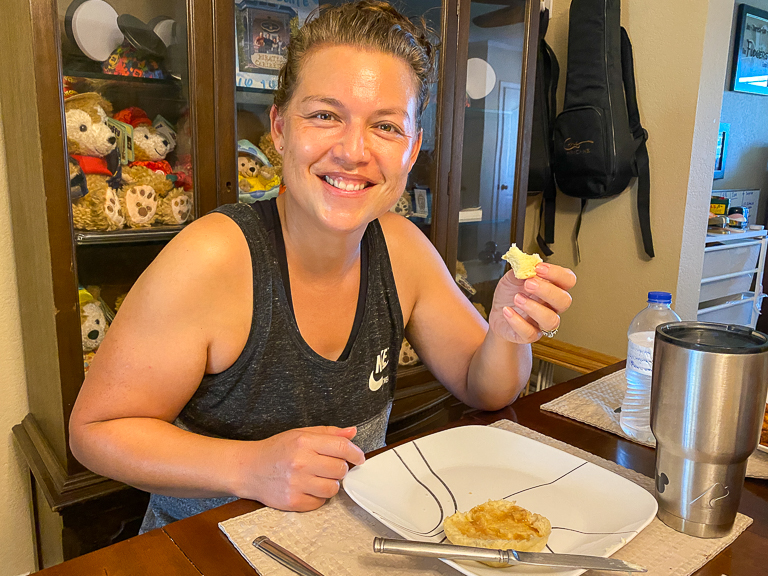 These are pretty big... but I might have still have 3 of them.
Alli said "It's a little nutritious! The honey!". Yeah, honey isn't that nutritious either Alli. 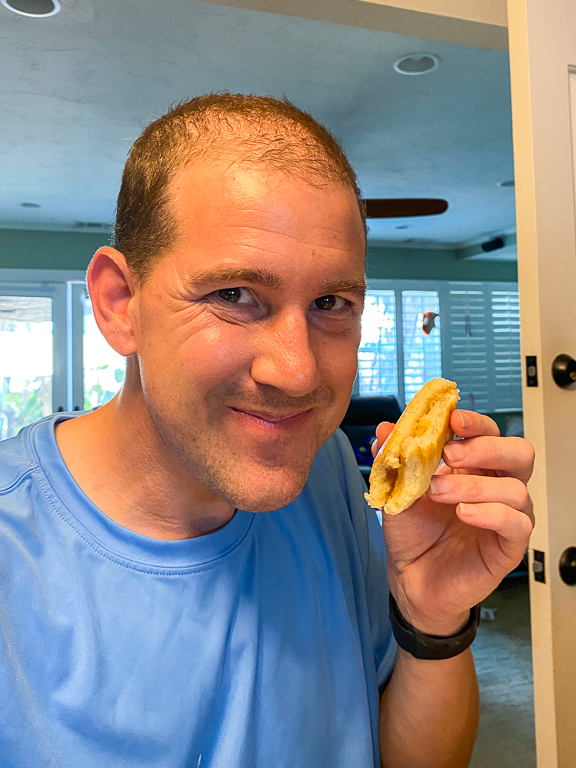 And Richard and Chi think they're so good. Chi wants the recipe for her to use in the future.
These were great! 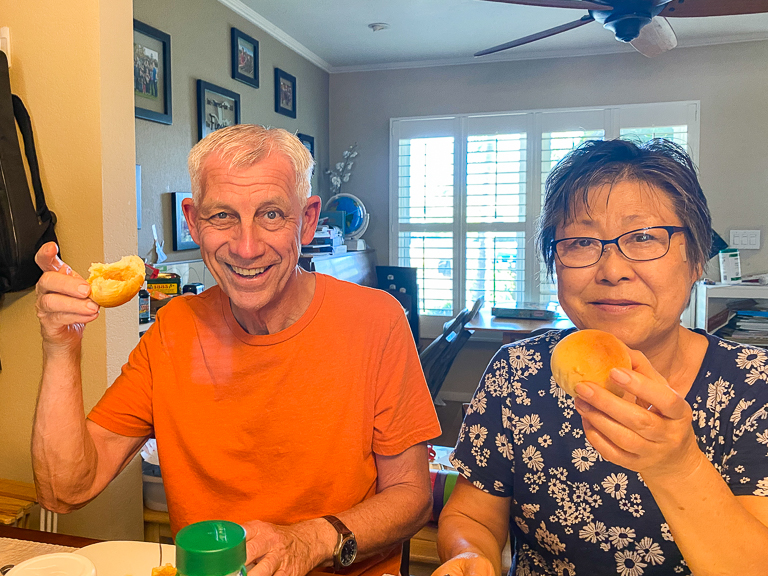