An experimental test to make the best Cheese Crisp

After the very successful night of making Parmesan Whisps at home, feeling emboldened, Theresa and I are venturing out to other cheese varieties. There's plenty of different cheeses we could try, but, we're going to sample a few of the more traditional cheeses you might have at home. 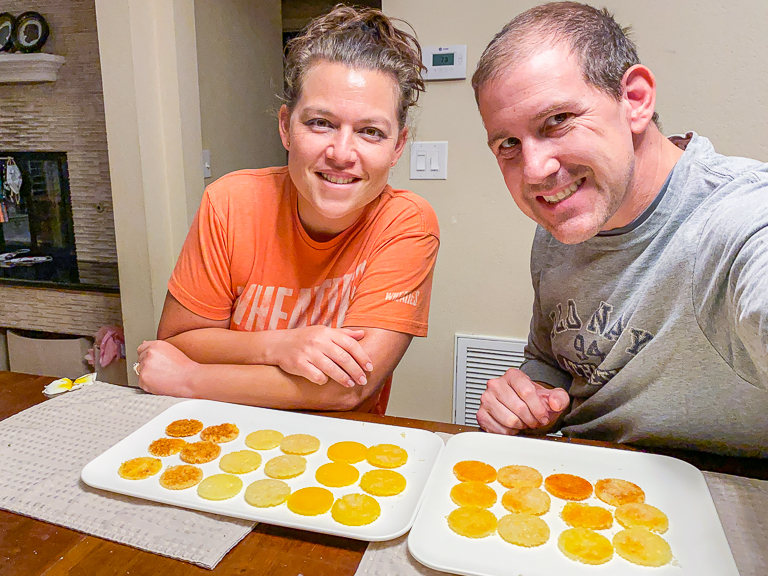 And so, here's our different cheese crisps that we're going to try tonight!
Wait a second, that doesn't look very scientific.

There! That's better! Is my inner engineer showing through?
We're trying 5 different cheeses and 5 cheese blends.
Those 5 cheeses are: Monterey Jack, Asiago, Sharp Cheddar, Smoked Cheddar, and Black Diamond Cheddar.
For the blends, we'll be combining those with shredded Parmesan cheese. 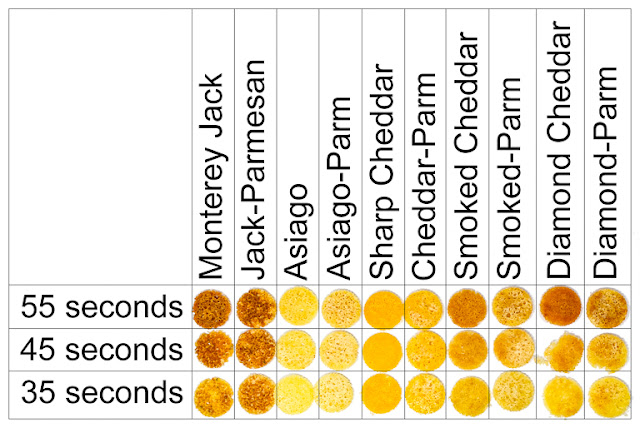 If we're going to be scientific about this, there's got to be some consistency. I set the scale to grams and each sample received 6 grams total of cheese. In the case where it was just 1 cheese, obviously it was just 6 grams. For the blends, I used 3 grams of Parmesan and 3 grams of that cheese. 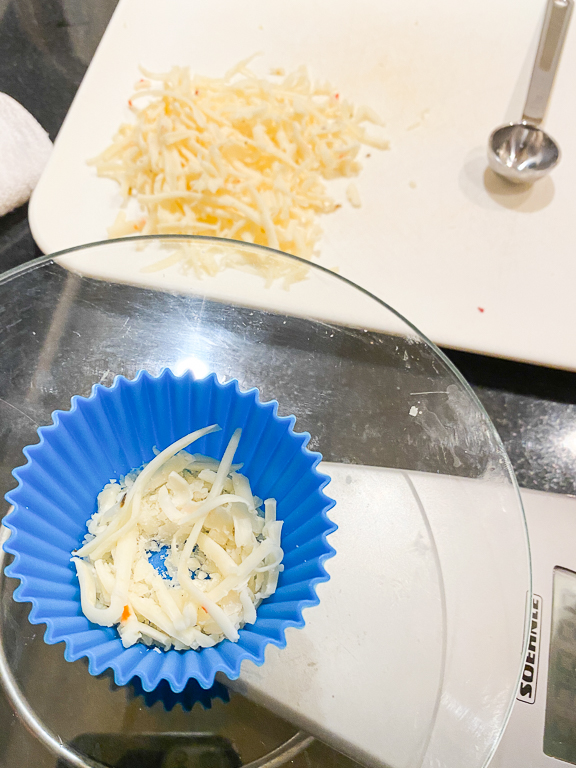 Theresa doing the cheese grating while I measured and microwaved. 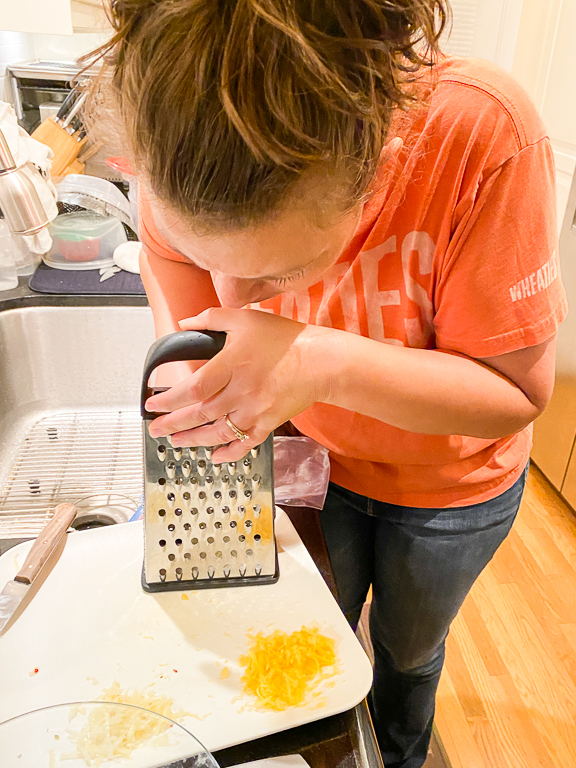 During our original experiment, we saw that cooking times were very important to get right. For each sample, we're cooking it 3 different durations. 35 seconds, 45 seconds, and 55 seconds. For all of these coming up, I noticed that anything that had half parmesan was a lot more "fluffy".

And so, after all that combining and cooking of each and every cheese crisp individually, it was finally time to taste them. 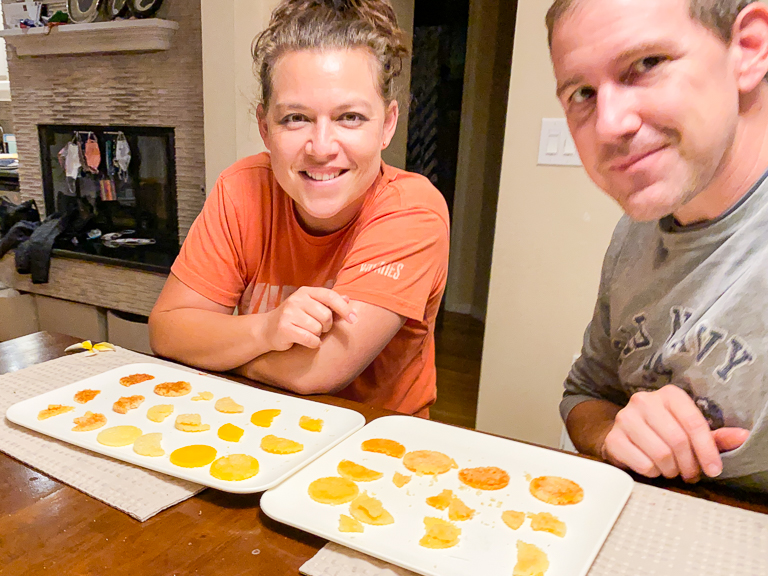 Starting with the Monterey Jack. I was hoping the peppery flavor would be a good addition to our Cheese Crisps.
Apparently this Monterey Jack burns very easily. It didn't matter if it was 35, 45, or 55 seconds, all of them had some level of burning. And unfortunately even the lightest cooked ones are still chewy too. I do taste the peppers, but the texture of these isn't up to par. 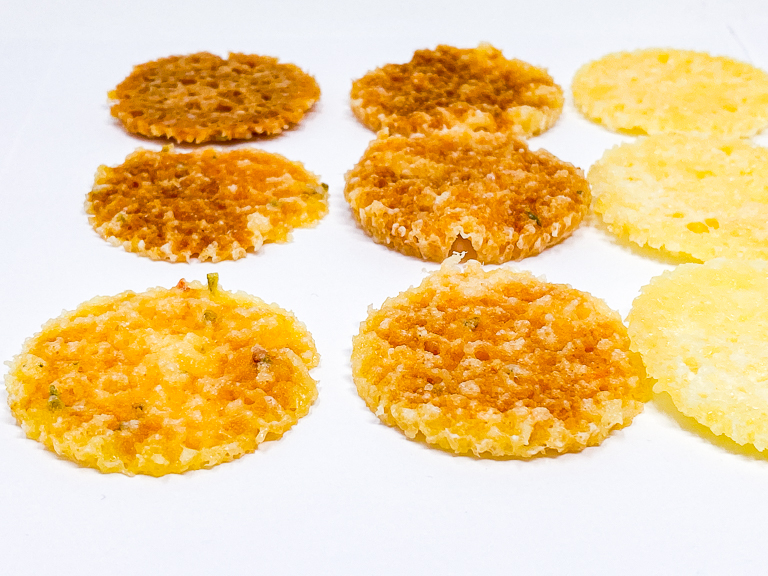 Next were the Asiago cheese crisps.
Asiago has a strong flavor and it's also a fairly hard cheese, similar to Parmesan. I had high hopes for it. And I wasn't disappointed, it crisped up nicely. The flavor was great! Mixed with the parmesan it added a great complexity to the normal parmesan, and 55 seconds was a great amount of time to make it crispy. 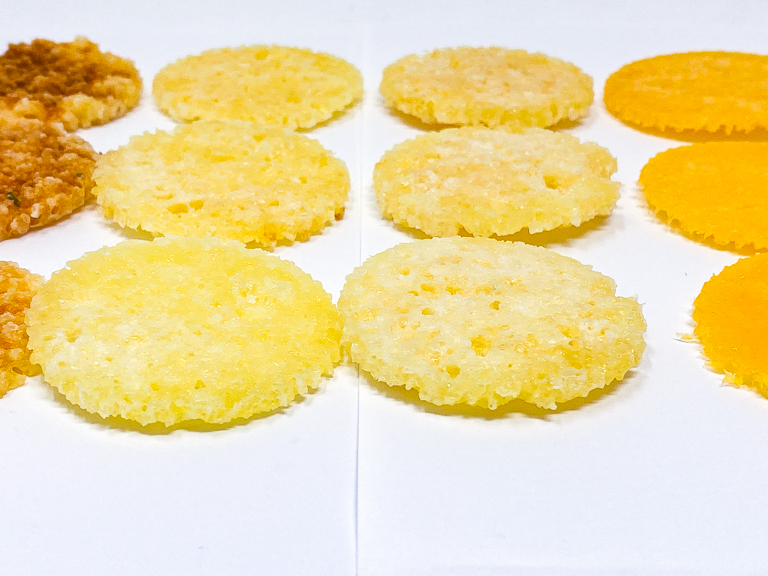 Time for the Sharp Cheddar. Of all the cheeses here, this one is probably the most oily. To get it the right texture you have to go at least 55 seconds with it. Combining it with parmesan helps. It's a nice flavor difference to have every once in a while, but it wasn't our favorite. 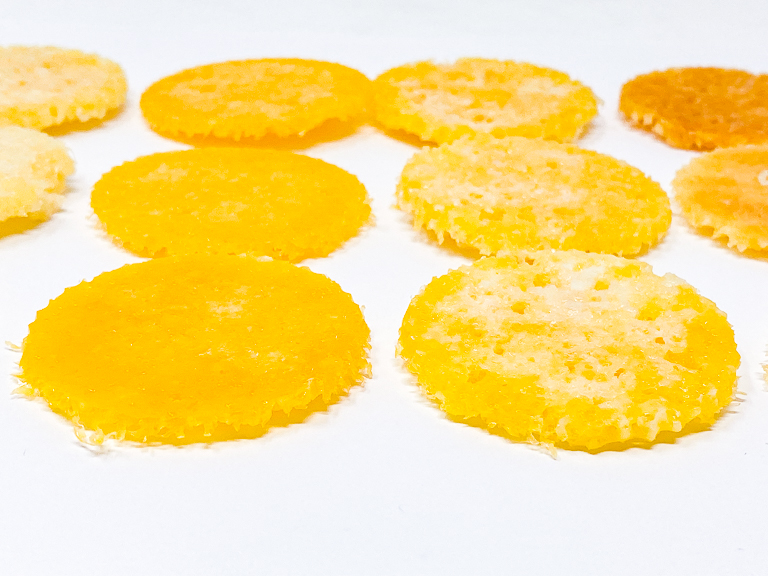 The smoked cheddar was next to try. Theresa "nope, nope, nope"'d the ones made out of just smoked cheddar. The smoke did make them a little bitter. Combining it with Parmesan helped, but only if it wasn't over-cooked. 45 seconds on these ones. 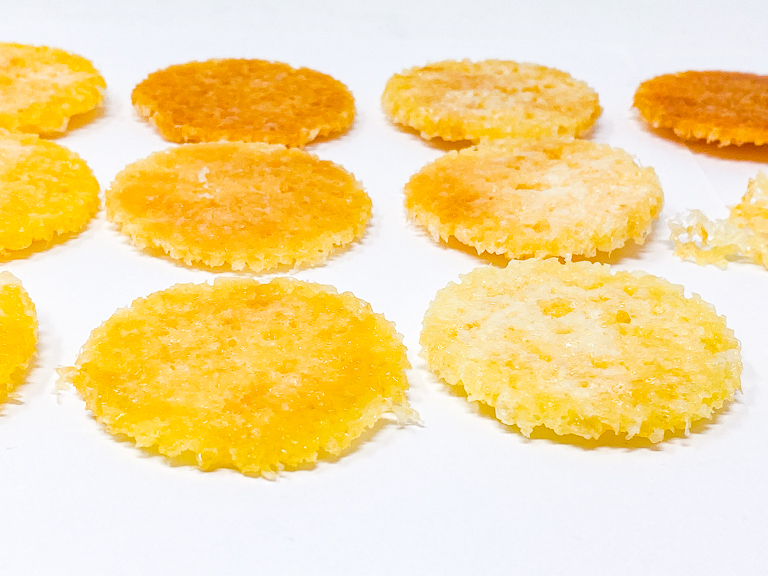 Last up were the Black Diamond Cheddar. I don't know what exactly happened with these, but something in these didn't taste right. 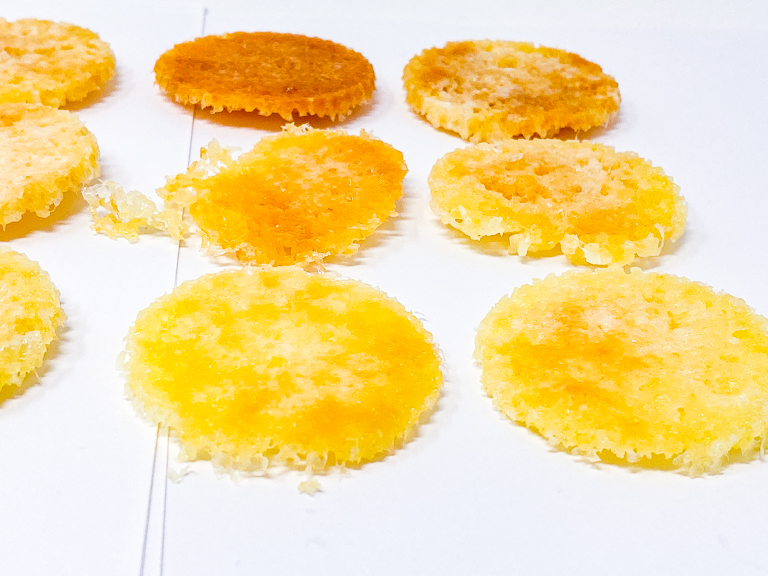 Here's our handy guide for what we liked and what we didn't. 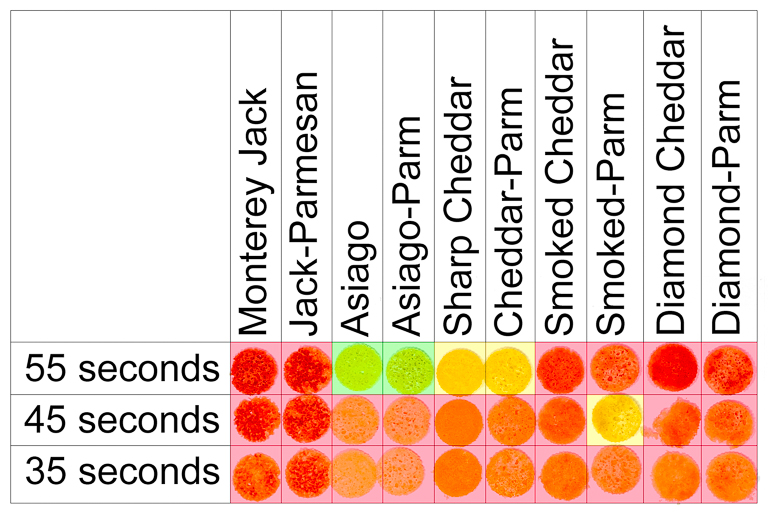 And here's what's left after all our tastings. Now we know what we enjoy and what we might try making again. 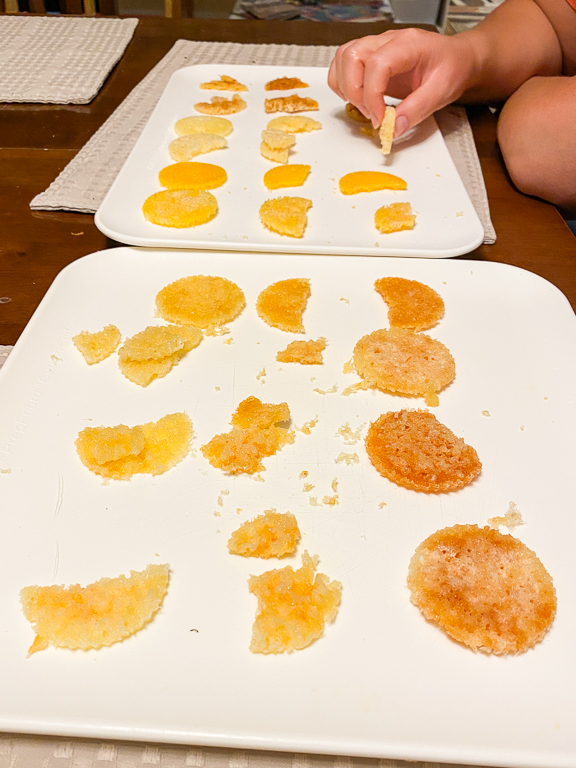 And Alli really likes being a helper in the kitchen. She loves the Parmesan Crisps as much as we do, and wanted to help me make up a batch. We started by sending the parmesan chunks through the food processor. First through the grating wheel and then using the blade at the bottom to make it into finer pieces. 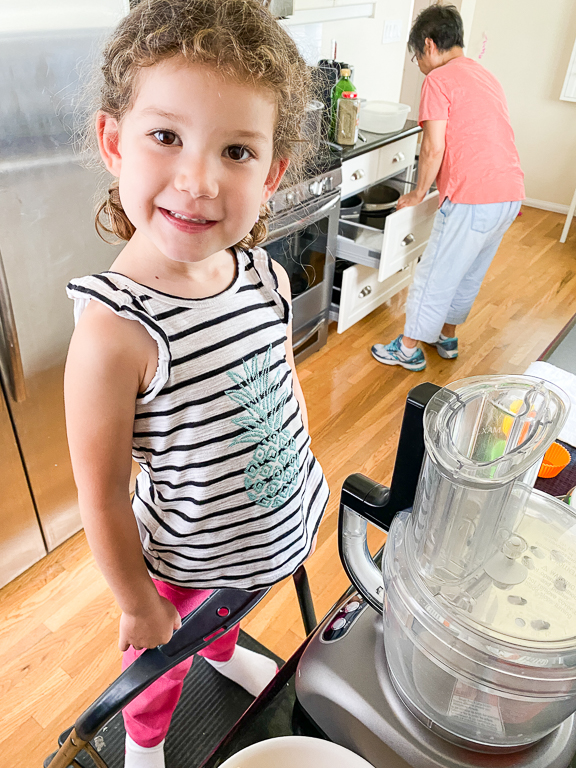 And she very carefully measured between 5 and 6 grams of parmesan for each silicone cup.
I found that I can put four of these on one plate, microwave them for 1:20 and they turn out perfect! 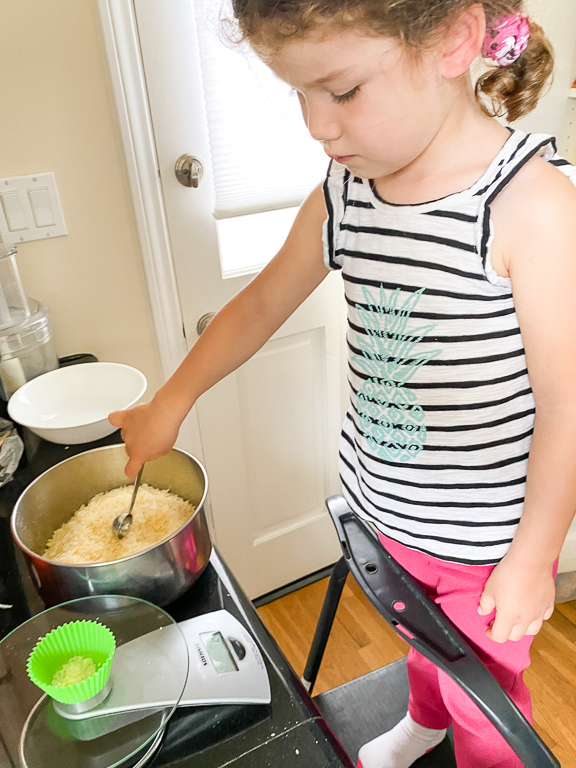 Great job Alli! She shared them with everyone in the house. Delicious! 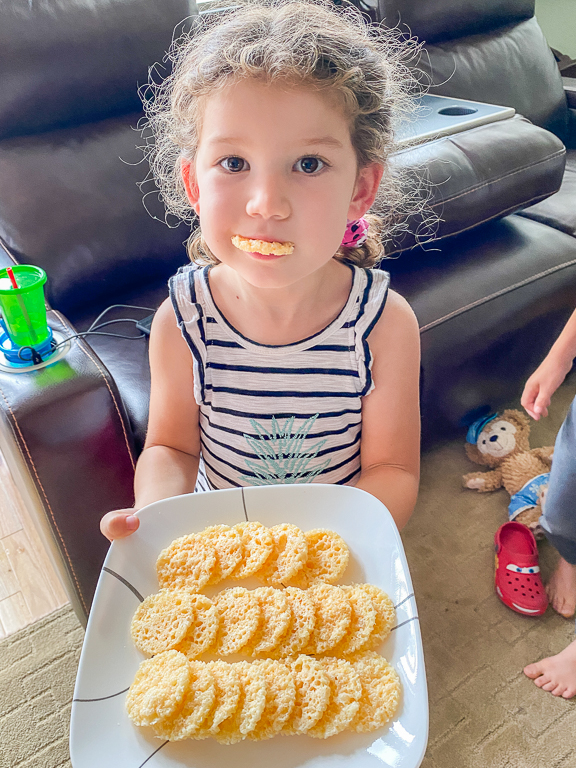 As far as these Cheese Crisps go, I think I have one more experiment I want to try with them. Flavors! I'm thinking Garlic, Italian seasoning, and a variety of other spices, just to see what might pair well together with them. Stay tuned for more coming up!
Posted by Joe at 5:00 PM