Who is feeling like noodles tonight? I've been wanting a tasty mac and cheese for a little while now.
I haven't had Noodles & Company for years now. Noodles & Company was something Theresa and I would indulge on when we were in college. Tonight, we're going to try making it at home! And today is National Macaroni Day! I think we can do something with that. 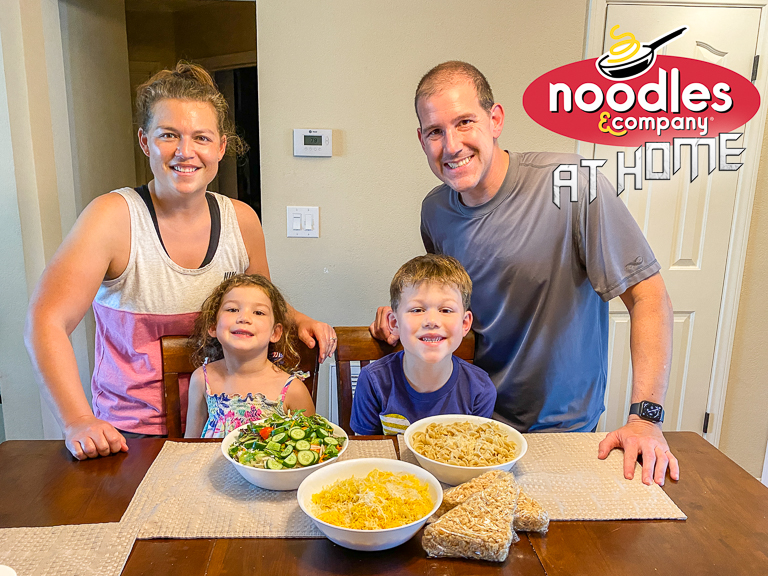 Being poor college students, our tastes were simple. Just pasta, no toppings, nothing particularly fancy. I would order the Butter Noodles. Theresa was fond of the Wisconsin Mac and Cheese. If we were feeling particularly celebratory, they also had giant Rice Crispy treats for dessert. These are the images from the Noodles & Company website at the appropriately chosen noodles.com. 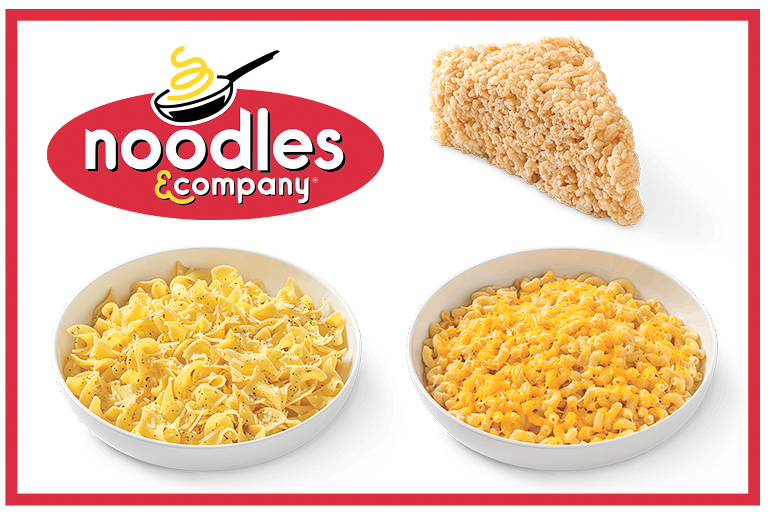 First up, Theresa's going to make us some Rice Crispy treats. There's nothing fancy about this one. It's the standard Rice Krispy Treat recipe, but then she adds 1 tsp of vanilla to the melted marshmallows. It adds a great flavor to an already delicious treat. 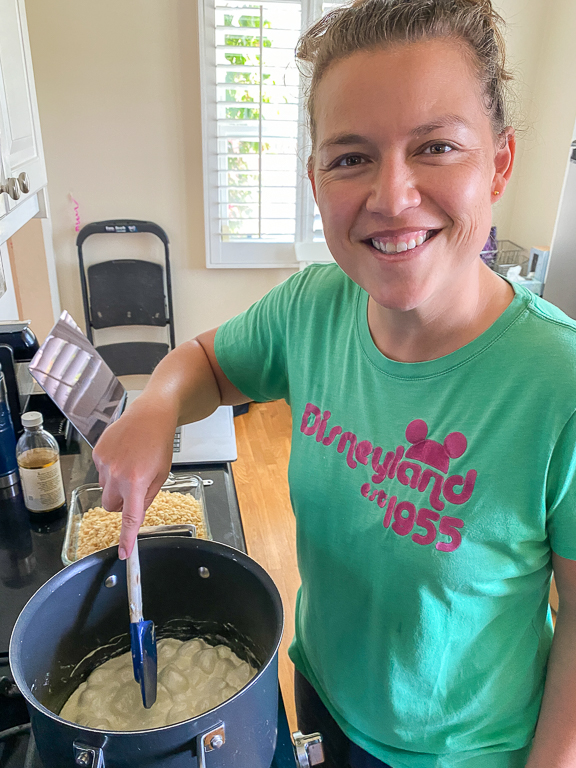 And when we make Rice Krispy Treats at home, I can't help but remember this old commerial.

Alright, on to the rest of the meal.
For the Mac and Cheese, we need to start with a sharp cheddar cheese, grated fine. Theresa was responsible for that. 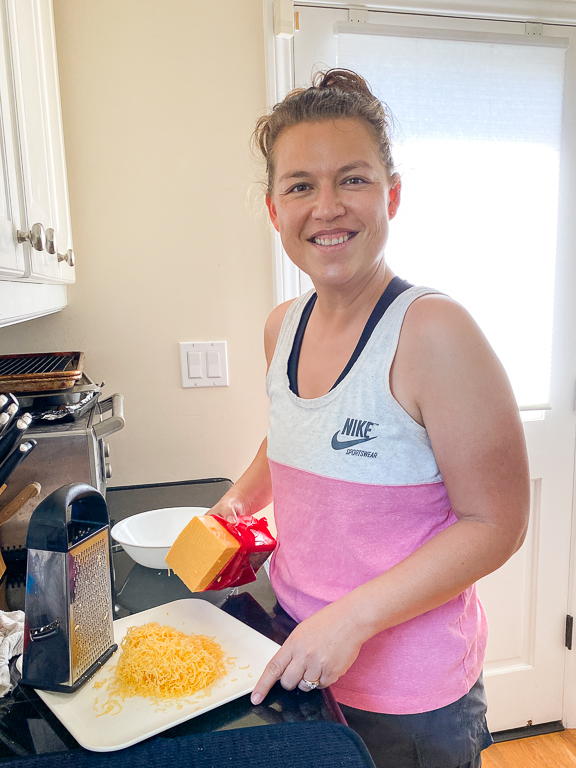 And I'm making a roux for the cheese sauce by combining butter and flour. We're basing this off a recipe for Easy Homemade Mac and Cheese from tastesbetterfromscratch.com. 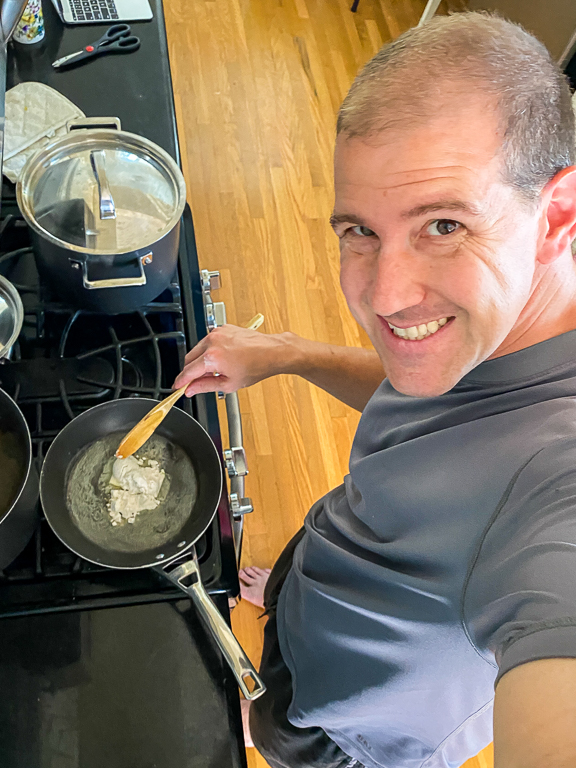 After adding in salt, pepper, milk and heavy cream, and bring up the heat, I tossed in some sharp cheddar. I had to taste it. So delicious, like a rich cheddar soup. We'll combine this with the other ingredients right before we eat. 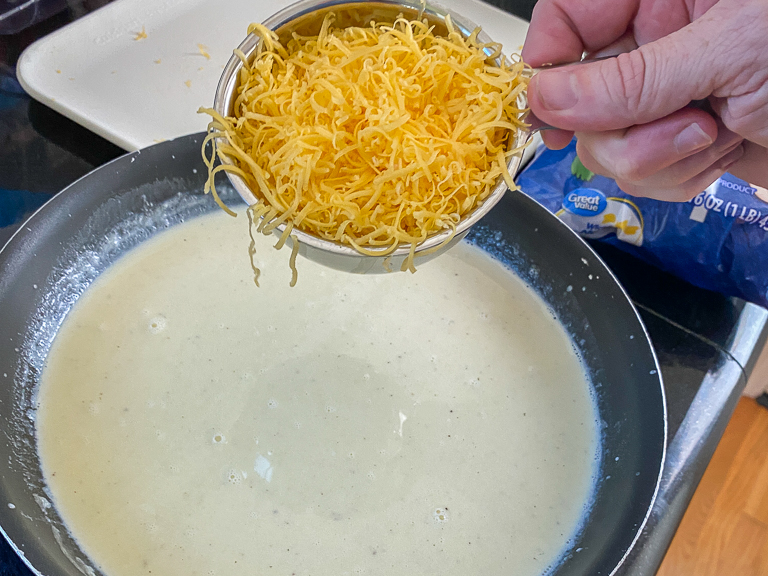 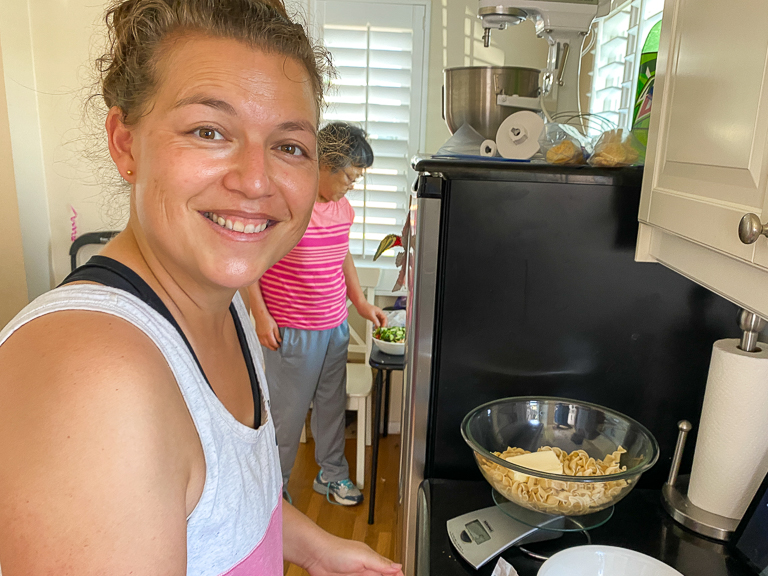 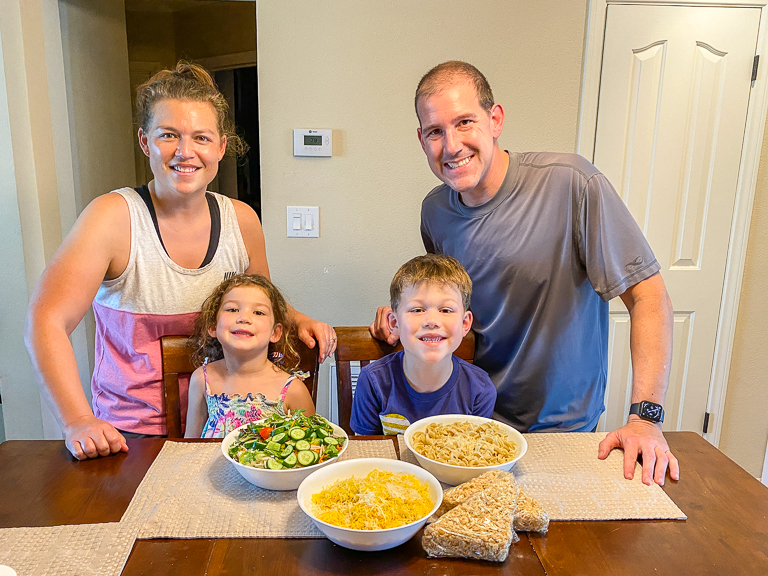 The Buttered Noodles I topped with extra Parmesan, just like I remember at the restaurant. These turned out even better than I remember them. 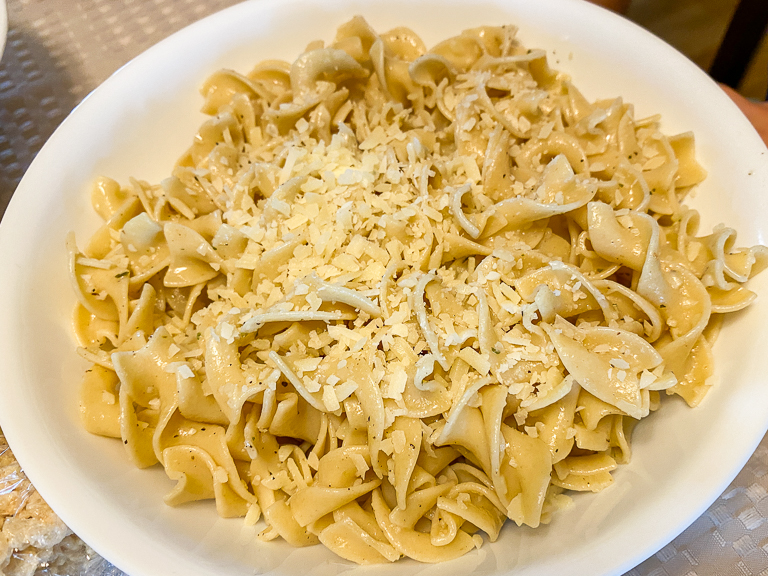 After mixing the elbow macaroni with the cheese sauce, I topped everything with sharp cheddar cheese and a little Monterey Jack. 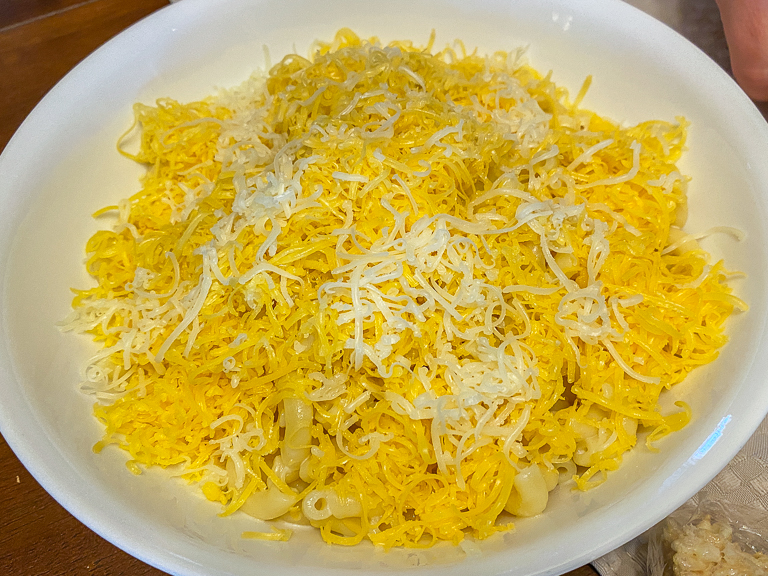 Theresa cut the Rice Crispy treats into the appropriate triangles and wrapped them in cling film. 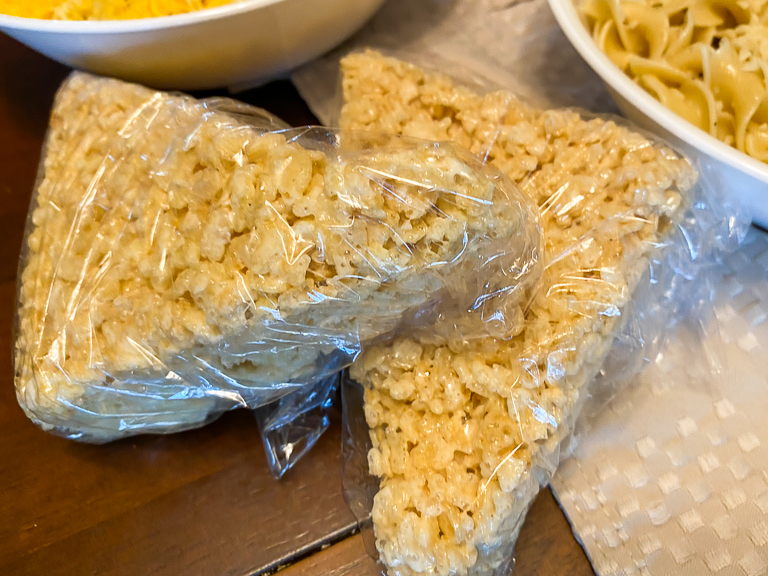 Now that is a tasty looking plate. My second plate looked similar to the first. 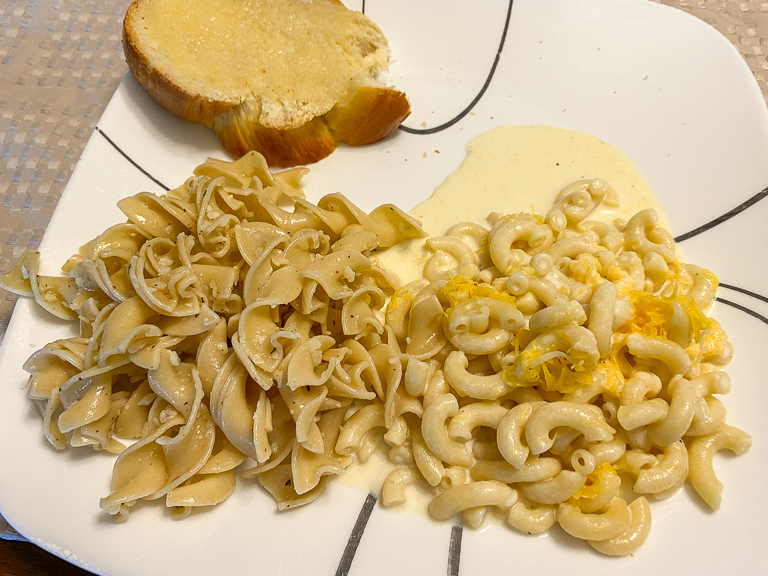 Rich and Chi thought it was particularly tasty tonight too. 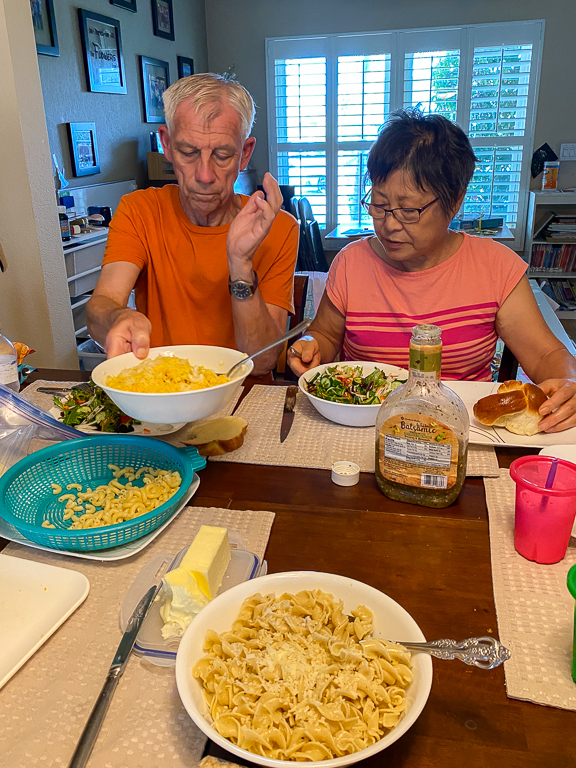 And the verdict? Everything was tasty, and honestly very easy to make.
Ian and I liked the rich flavor the Mac and Cheese best.
Theresa, Alli, Rich, and Chi, preferred the Buttered Noodles, but honestly, it's all good. 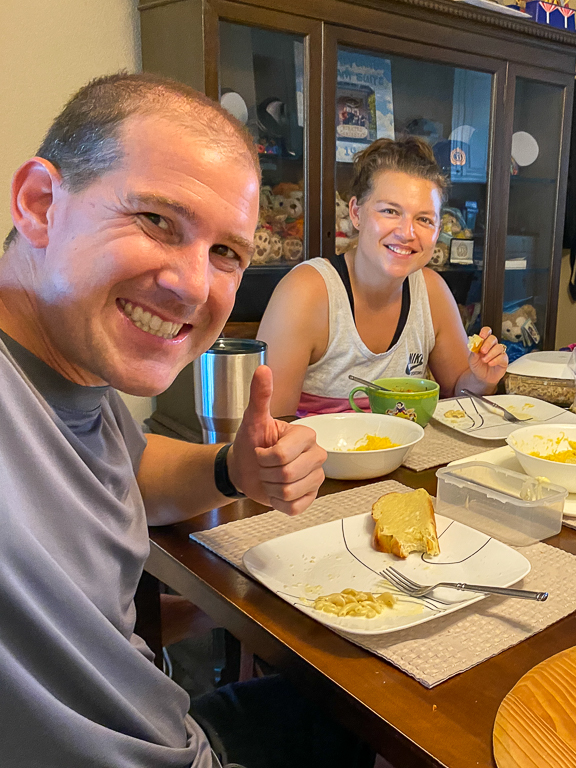 And we can't forget about our delicious dessert. Yum! It was a great meal and a good flashback to old times. 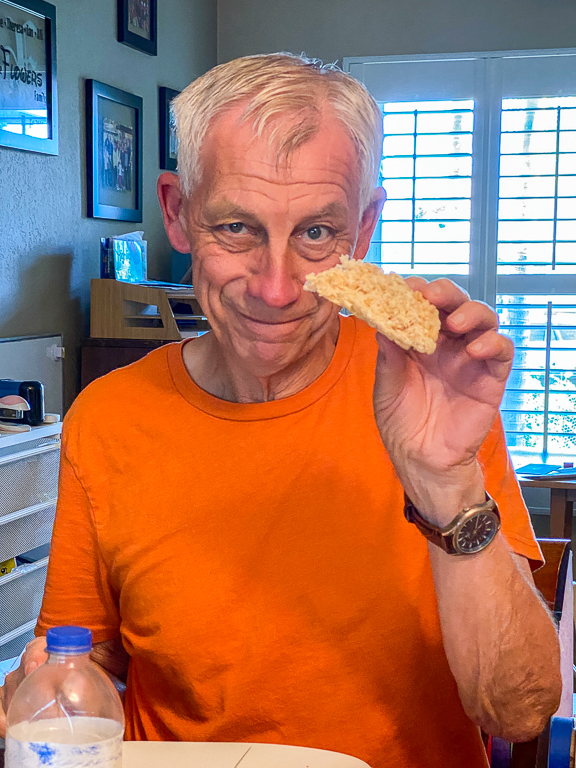