I love pizza day. It's a great time to be creative. Last week we were in Missouri and I made Wild Blackberry Pizza.

This week we're in Kentucky. I asked the kids what Kentucky is famous for, and of course we think of their famous fried chicken. I've never made a fried chicken pizza before, so I'm really looking forward to seeing how all of this will turn out! 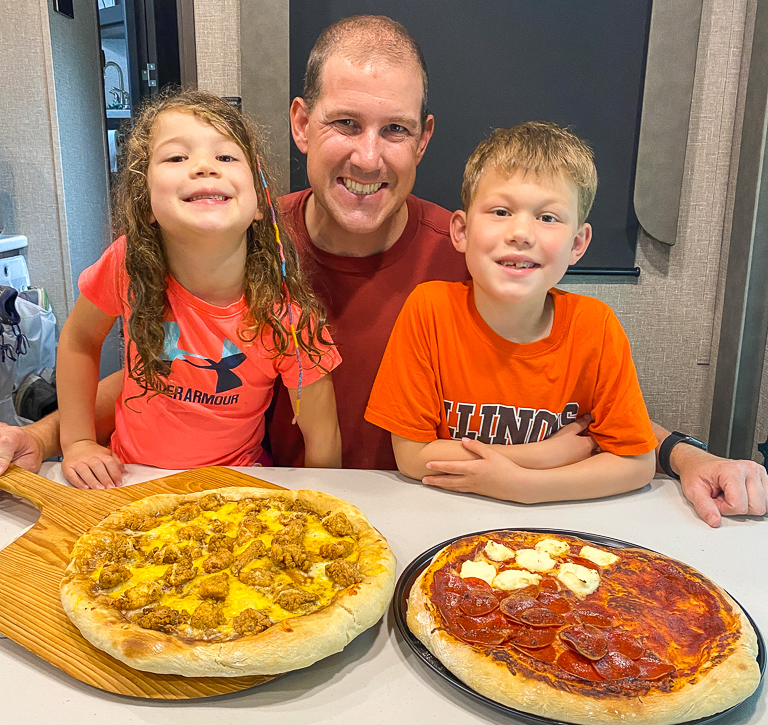 Even in my limited RV pantry, I still had 9 out of the 11 herbs and spices that make up the KFC Original breading recipe. Just white pepper and mustard powder that I was missing. 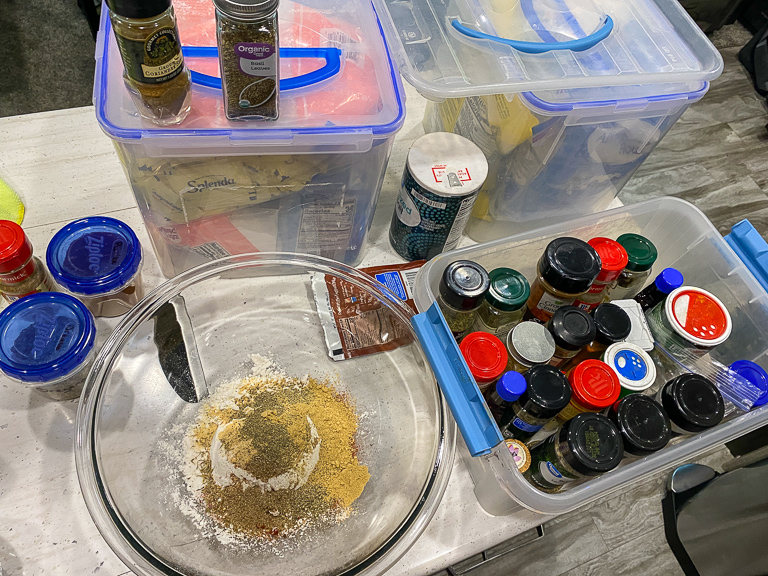 They suggested dipping the chicken in water, but I figured it would be better in a little bit of buttermilk, salt, and pepper. 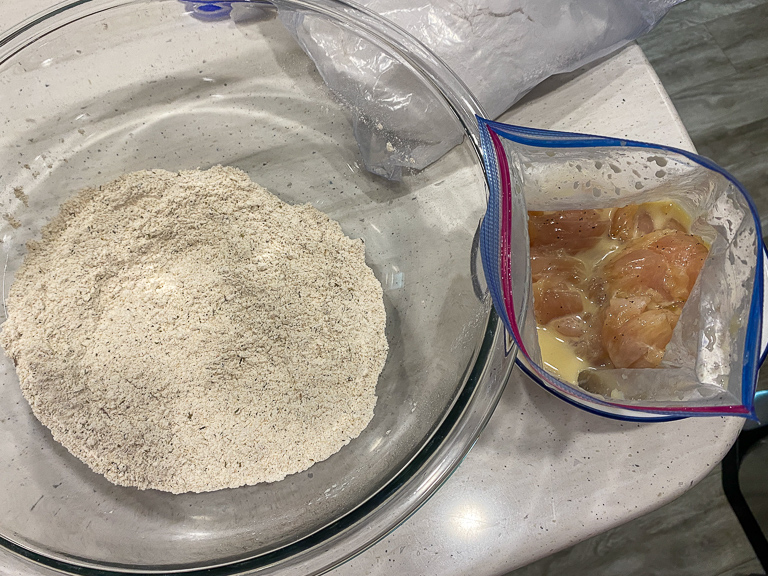 I breaded and fried the chicken in vegetable oil for a few minutes at a relatively low 300F. I also opted to use chicken tenders instead of cubed chicken breasts to make sure the end result was nice and tender. 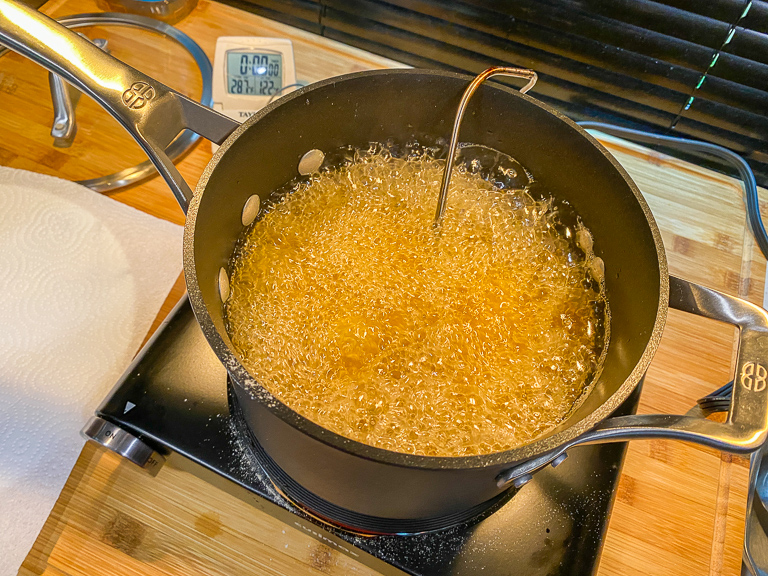 My first batch of crispy chicken nuggets. Hey, weren't there a few more on this plate? The kids were hungry and wanted a nugget snack. Alli liked them so much that she said she would eat these for dessert. 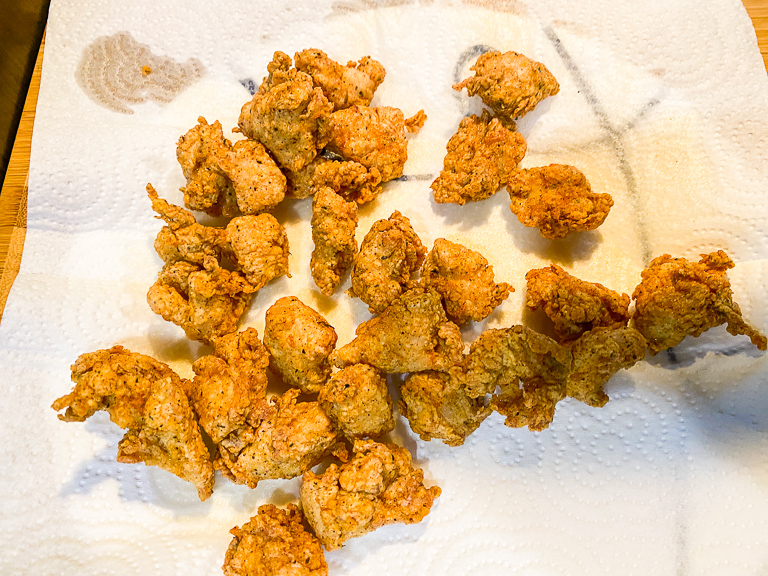 Instead of a regular tomato sauce, my mind was instead on KFC's gravy. I used a brown gravy mix and added a little more corn starch to thicken things up. 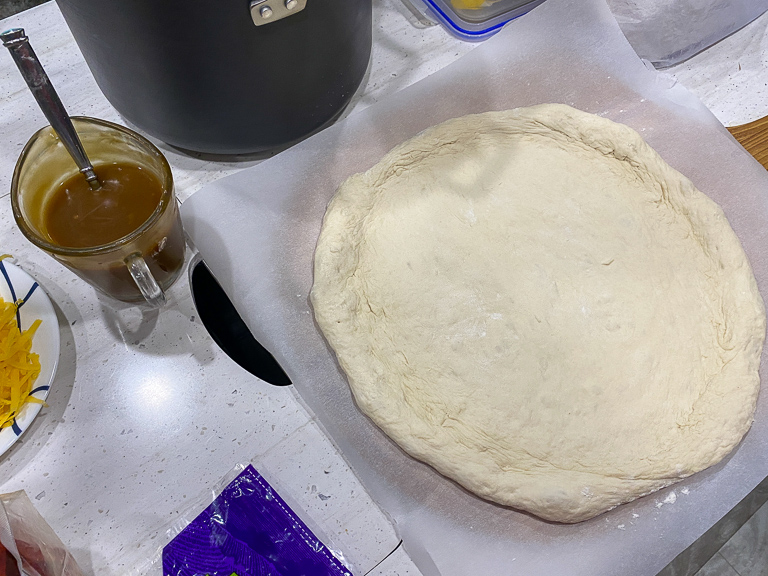 Down goes the gravy base, and on top I sprinkled mozzarella cheese. 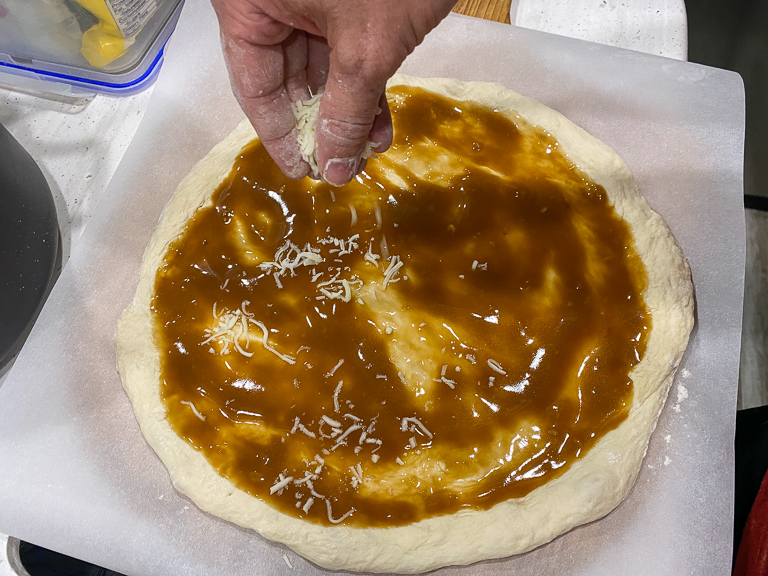 I also made some mashed potatoes out of a potato, sour cream, butter, salt, and pepper. That went down around the edges plus a sprinkling of cheddar cheese on top. I really was debating putting some corn on it too, but ultimately decided against it. 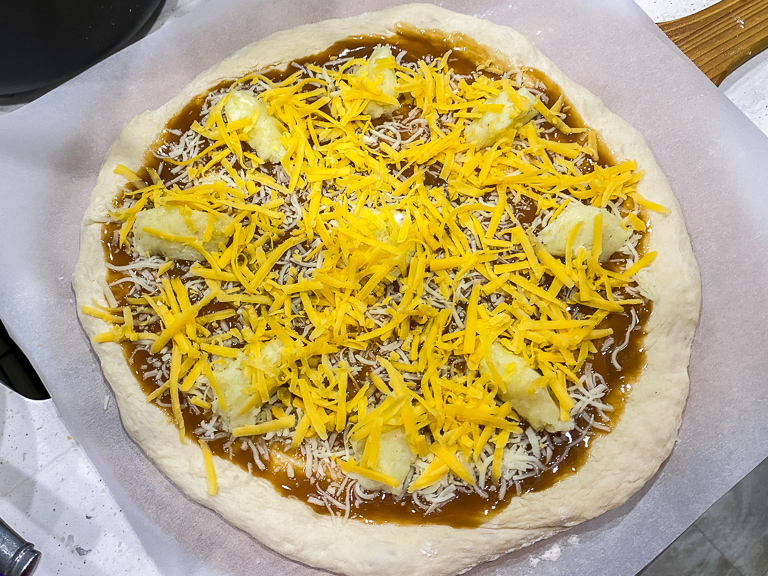 This pizza cooked in the pizza toaster oven on the convection setting for about 10 minutes. 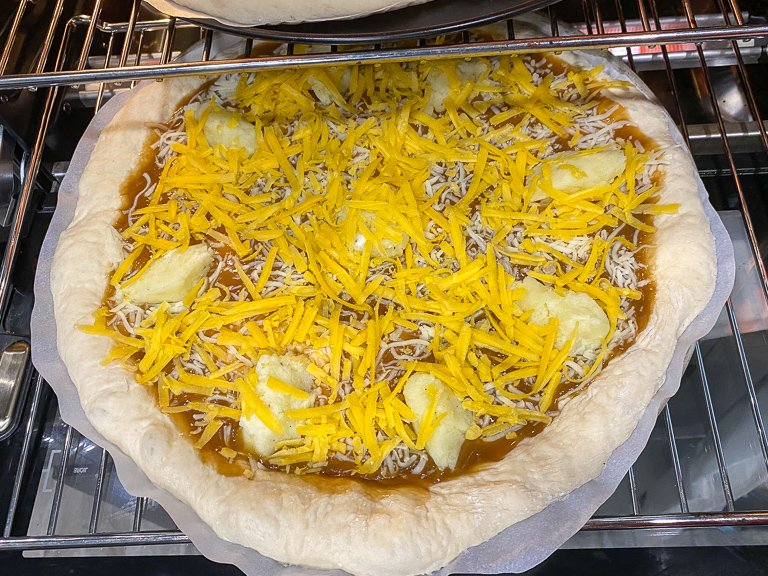 Before everything was completely cooked, I pulled it out to add my KFC copycat nuggets on top. 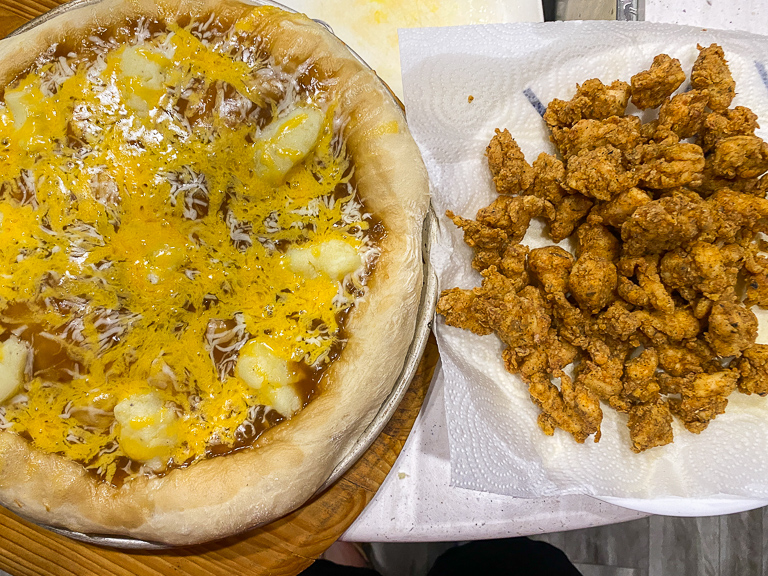 I put a good amount of nuggets on top (if this was Chick-Fil-A that would be about $15 worth of nuggets). I sprinkled a little more cheddar cheese on top, then finished it off with a few more minutes on the top rack of the toaster oven. 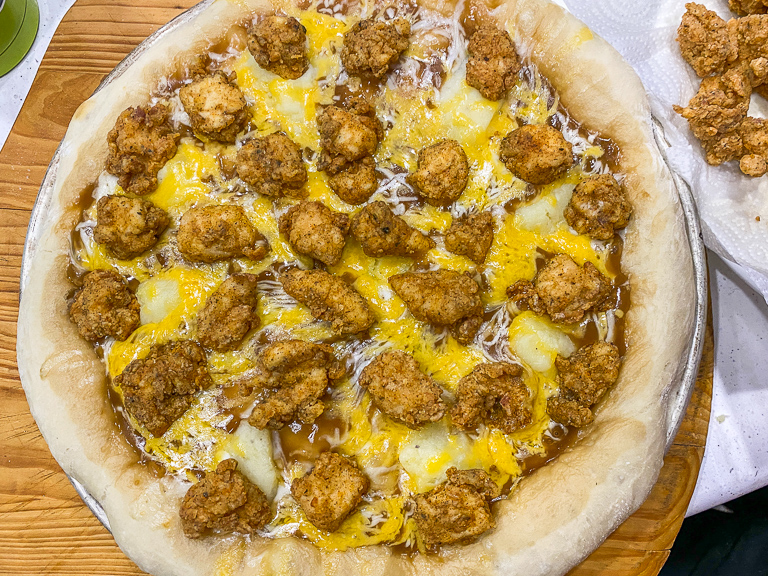 For my second pizza, I made a pizza with varying levels of pepperoni. Some with none for Alli, some with triple pepperoni for Ian, and some with ricotta (left over from last week) for me! 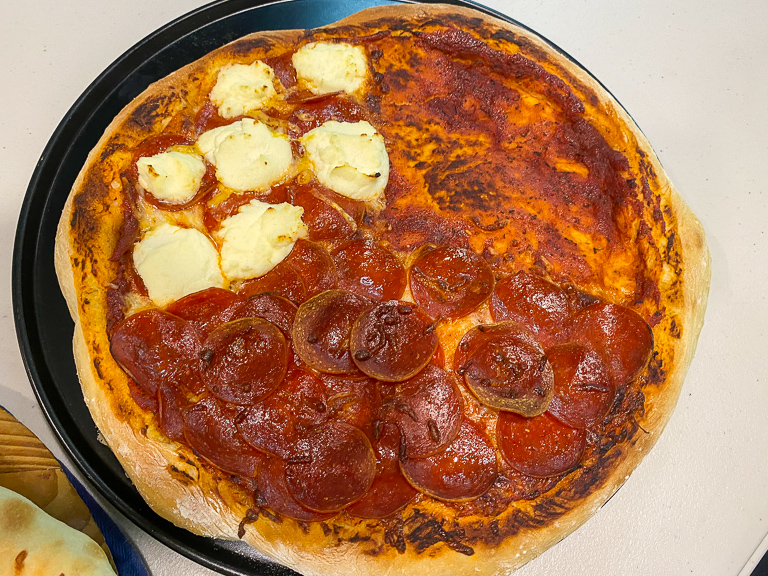 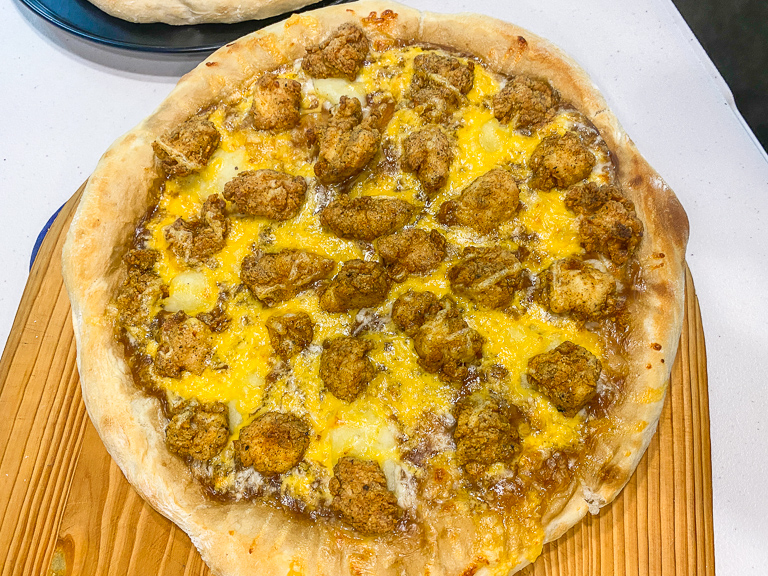 Let's cut into it and see how it tastes! 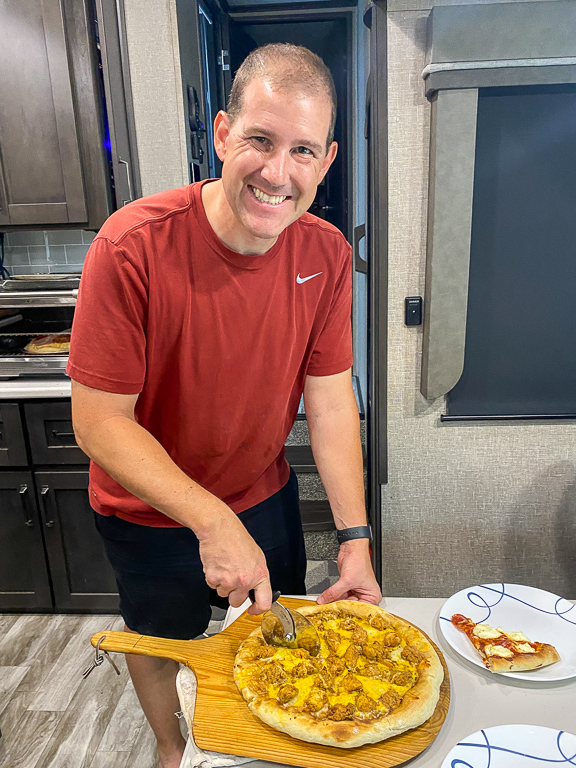 Theresa is eating hers with a fork. She decided that it needed more chicken nuggets, and would ultimately add a nugget into every bite. 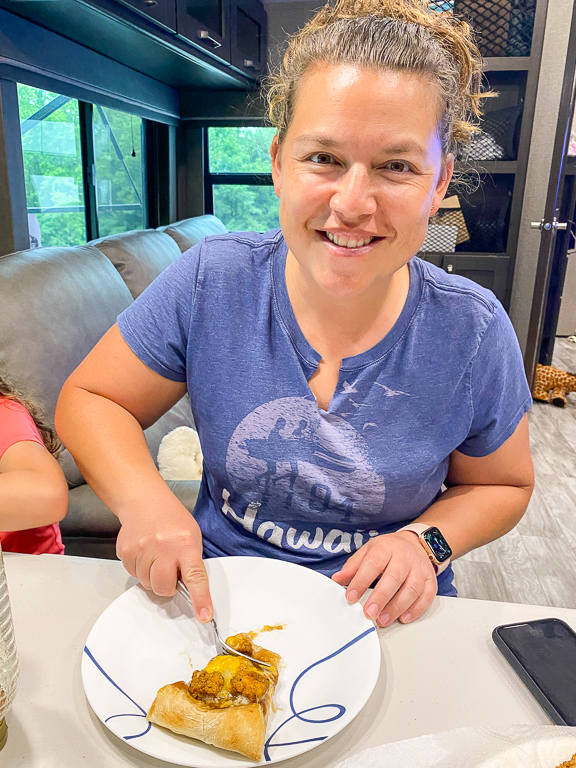 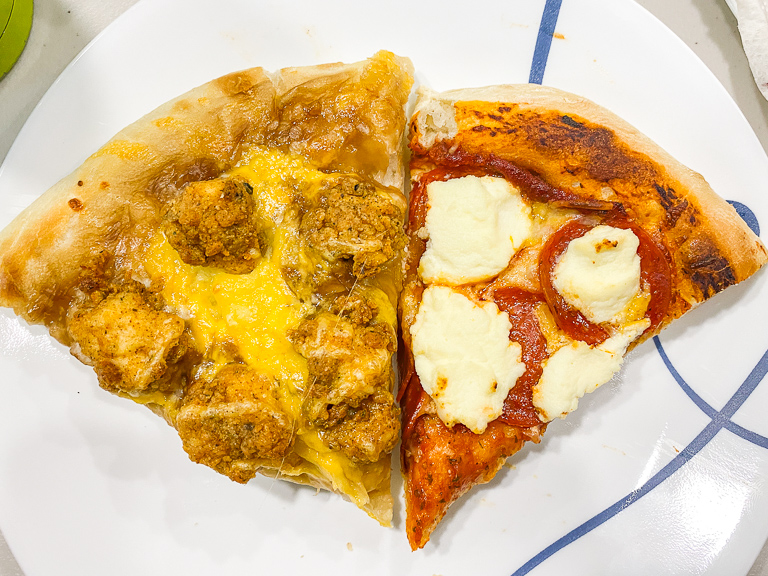 So what's the verdict on the Kentucky Fried Chicken Pizza? Depends on who you ask.
I thought it was really good. I liked the gravy base to go along with the crispy chicken nuggets. The nuggets were delicious and flavorful and a good topping to have on the pizza. And when you got a bit of mashed potato with it. Mmm. Creamy and so good.
Everyone else though thought the pizza was tasty, but why make it into a pizza? They were happier to snack on the nuggets and everything else individually instead of combined.
Still, it was a fun experiment and a good location specific pizza to make while we're visiting Kentucky! 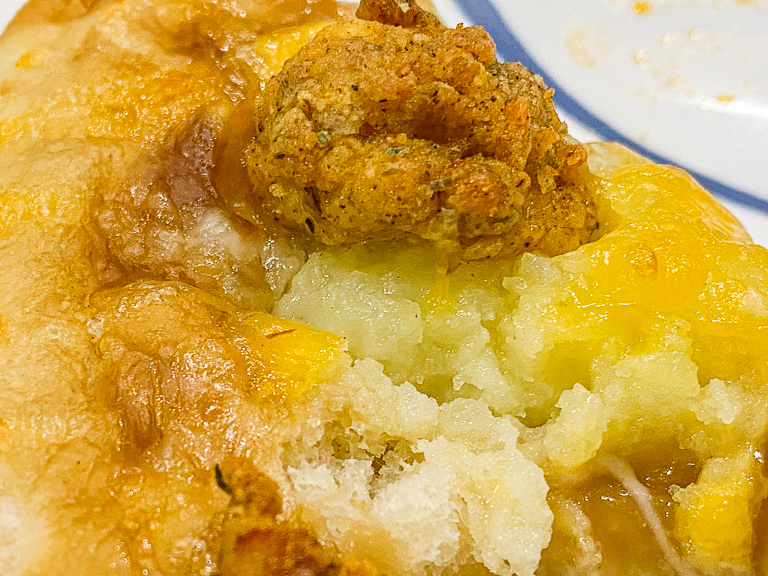