Wow, it's time for another giant taste test. This time I've been able to find a ridiculous number of Faygo sodas! 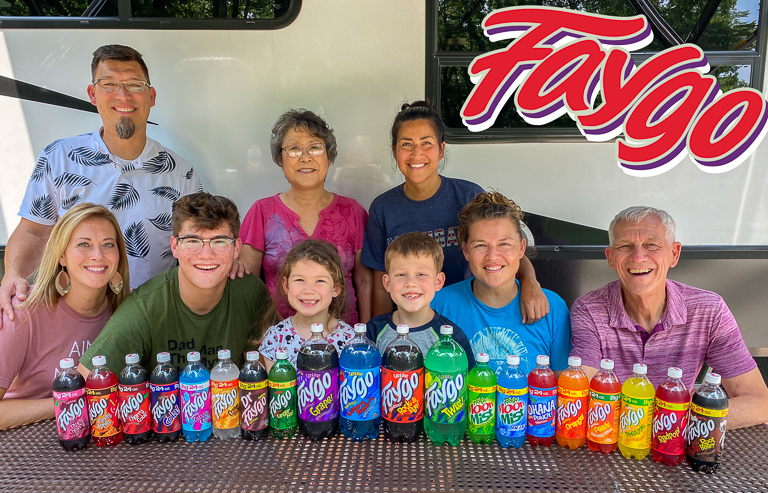 Based out of Detroit Michigan, Faygo boasts over 50 different flavors on their website. While I couldn't find all 50, I was able to find 20 of them. Of those 50, 8 of them are sparkling water flavors, and another 11 of them are diet flavors, so I think 20 isn't actually too bad.

We're in Greenville Missouri at an RV campground, and Downtown Greenville is just a 2.5 mile bike ride away. We were coming for things like egg and flour, but found so much more! 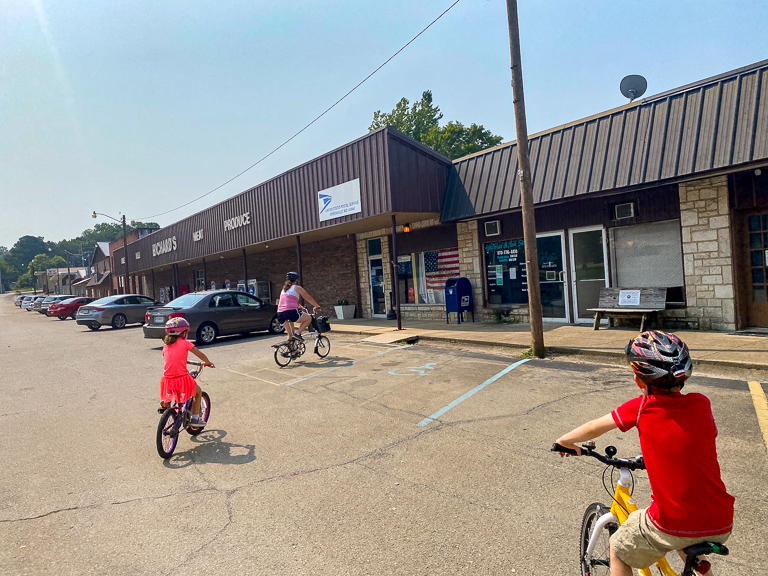 Greenville is a pretty small town, with a population of 526. There's no Super Walmart, Kroger, or chain grocery stores here. Here it's a Richard's Grocery, right across from City Hall and the Post Office. 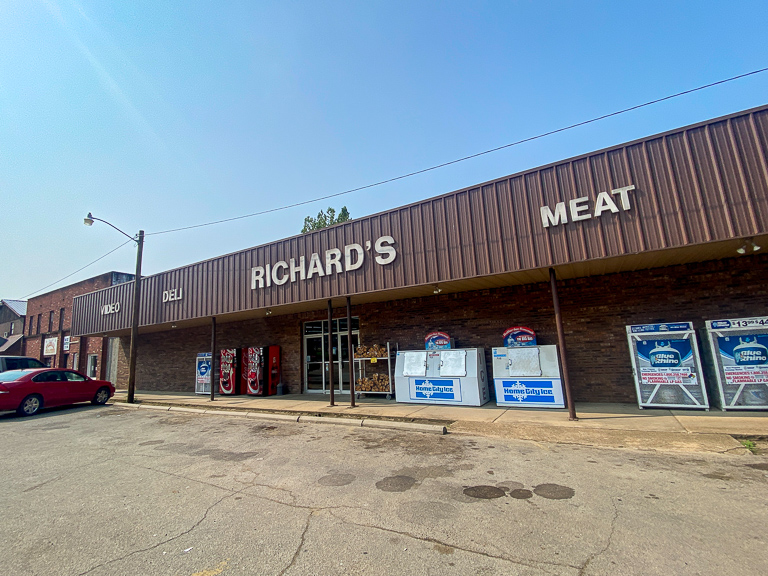 So weren't we surprised when we looked in the cold case and found 15 different kinds of Faygo Pop. I was thinking of just getting everyone's favorite flavor and doing a taste test with that, but Theresa reminded me that we've got visitors coming and it would be fun to do a giant taste test with everyone. Usually Theresa is the one telling me to tame my taste test purchases, but if she's in then we're going all in! 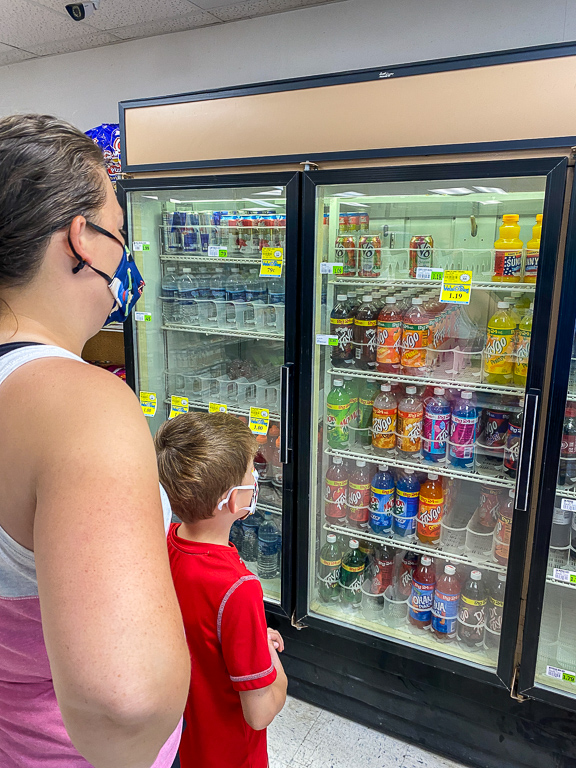 But that was just the cold case. All of us went back to the rest of the soft drinks and found 5 more flavors! 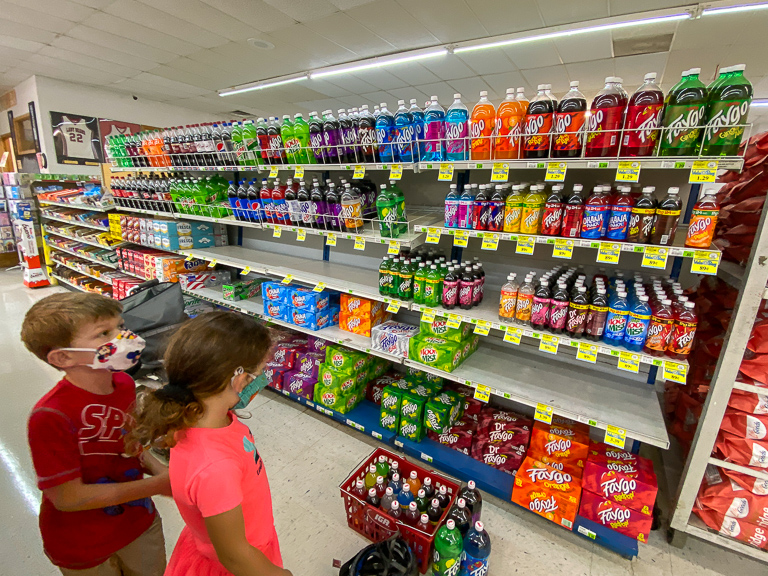 That right there is a lot of sodas. I did mentioned that we rode our bikes here, right? 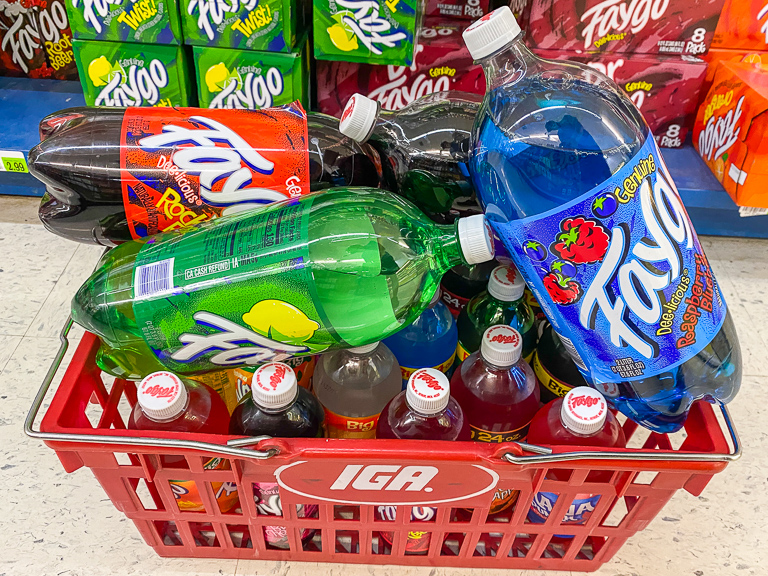 The cashier was a little surprised to see someone buying so many different sodas all at once. The kids told her that we do this kind of thing pretty often. Well that's true. 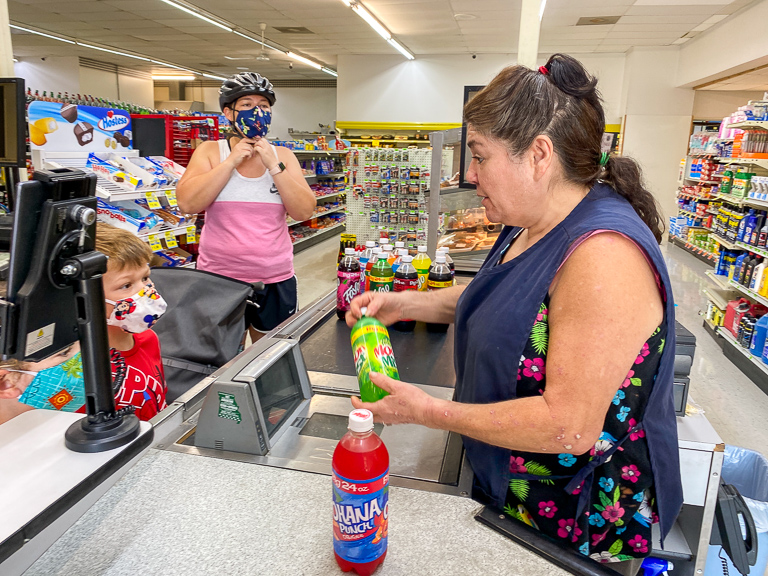 Since we forgot to bring water on the ride, the kids even got to pick an extra one from the cold case to share. Their pick that they could agree on was Dr Faygo. They loved it! 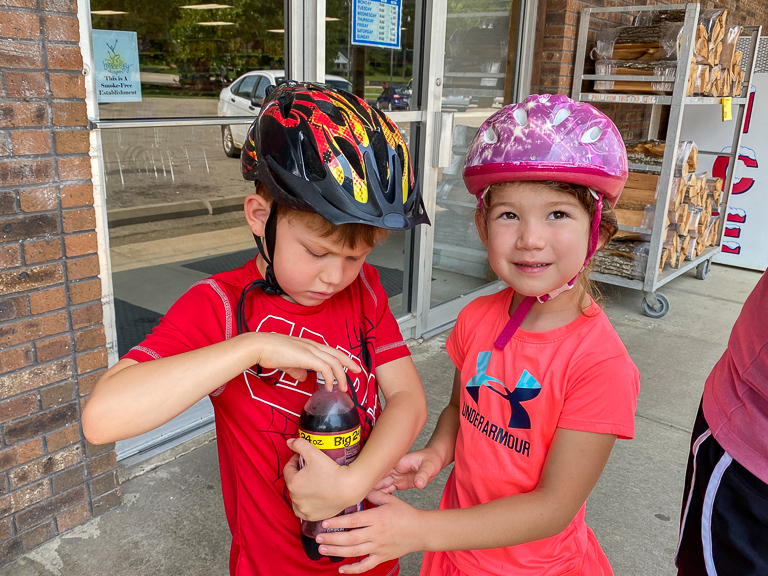 With a few doubled up bags, along with Theresa's messenger bag, we were able to get everything back to the campground. 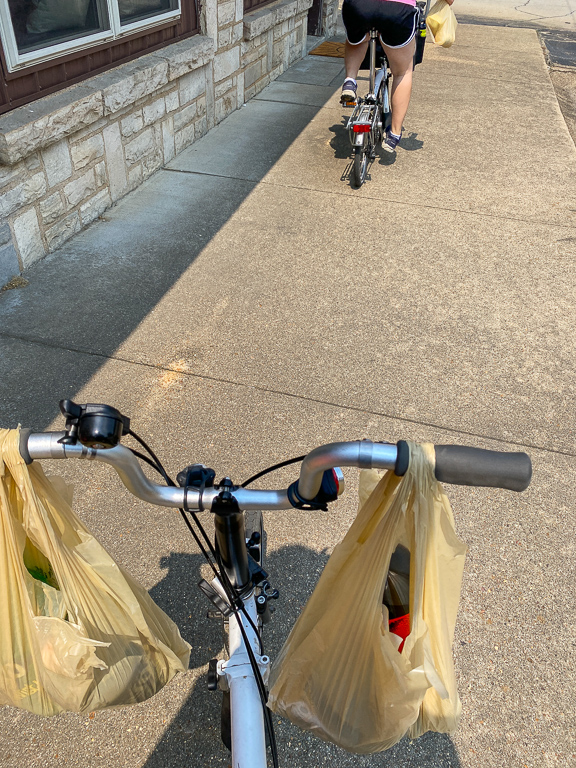 And there's no way our RV fridge could cool down this many drinks quickly, or even fit them all with the rest of our groceries, so we made another trip to get ice so these could all chill in our cooler bags. 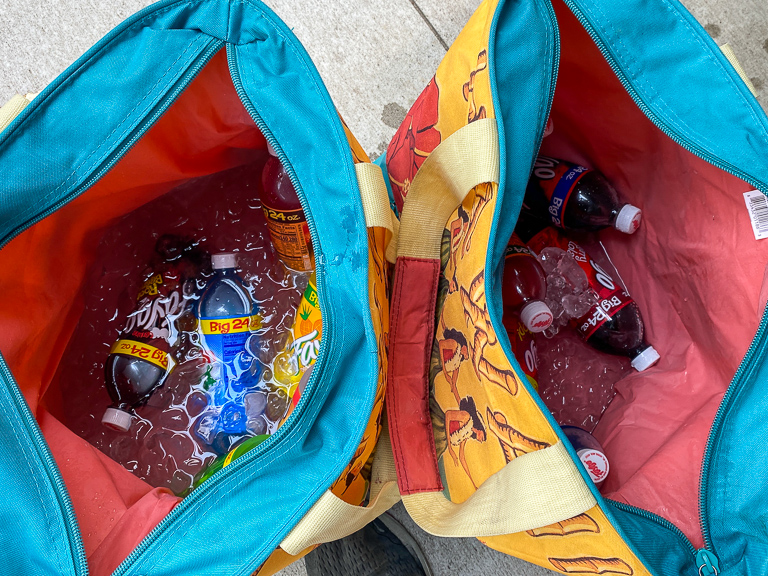 Good thing we have a lot of people here to taste all these! 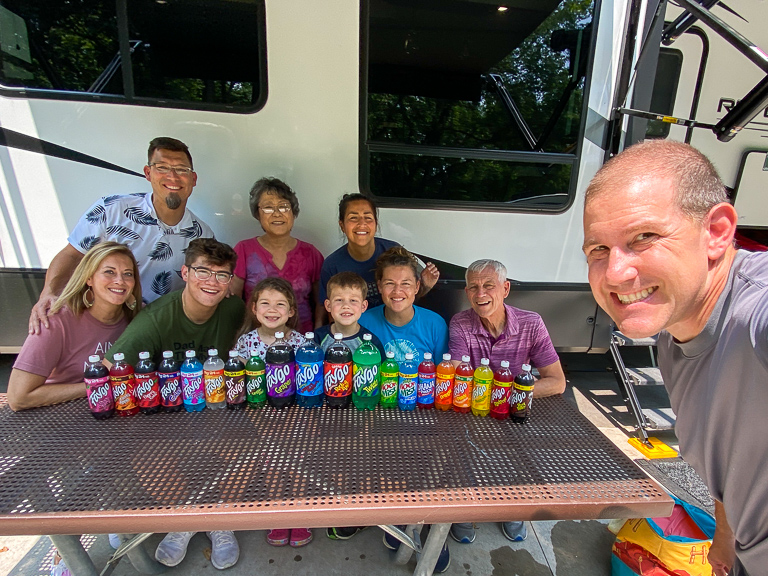 Even after finding these 20 flavors, I was still on the lookout for more. I went to Walmart, Kroger, and even Meijer, but didn't find any different flavors than I already had. I'm even more impressed that Richard's had so much variety!
The Faygo website gives descriptions for each of the flavors.
Black Cherry - At one point in every cherry’s lifespan, they go through a rebellious phase. That is precisely when we pick them.
Candy Apple - Enjoy the same taste of a fresh candied apple without getting any of it stuck in your teeth.
Cherry Cola - "You’re the cherry to my cola,” isn’t really a saying, but it definitely should be.
Cola - We’re not scared of a little competition. Our cola is in a league of its own. 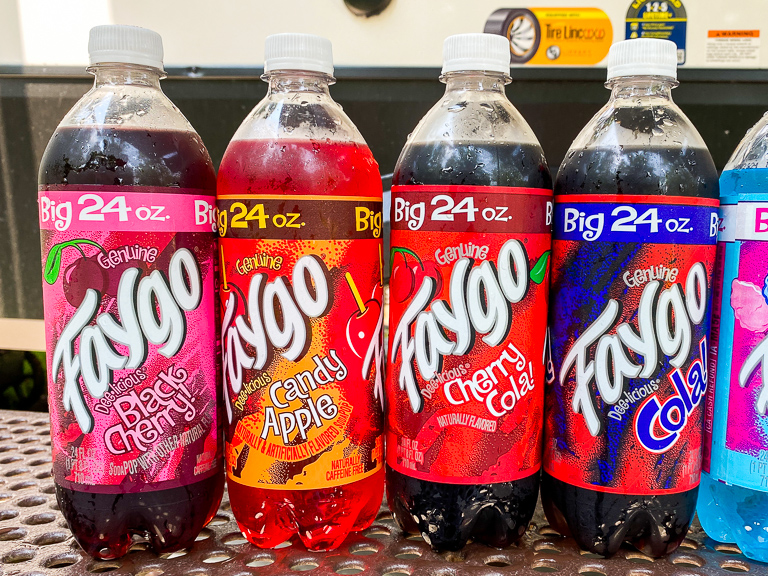 Cotton Candy - Every memory you’ve ever had while eating cotton candy will immediately come flowing back.
Cream Soda Vanilla - Looks like water, but tastes like a vanilla dream.
Dr Faygo -  With a perfect combination of flavors, this pop has exactly what you’d want to remedy your thirst.
Ginger Ale - That warm fuzzy feeling delivered to you in liquid form. 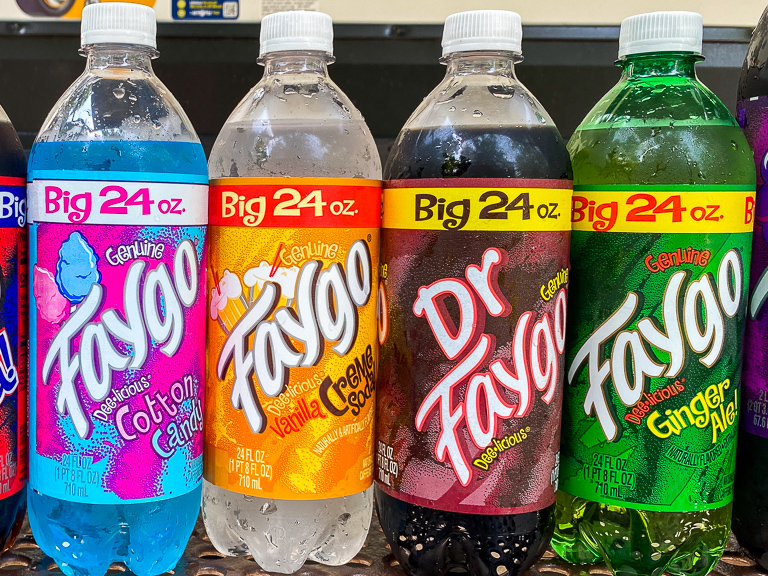 Grape - Nature’s candy, but with a lot more pop.
Raspberry Blueberry - The name says it all. For when you can’t decide between red and blue.
Rock & Rye - Like cream soda, but with a delicious ¿¿cherry, maybe?? twist.
Twist - Made from the notoriously delicious lemon-lime fruit. 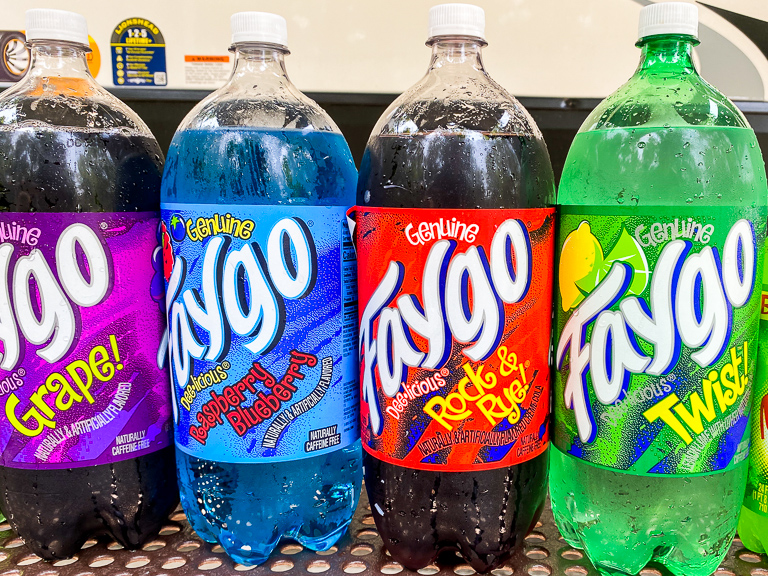 Moon Mist - From a citrus spring located on the moon.
Moon Mist Blue - On either side of the lemon-lime moon spring are thriving berry bushes. We harvest them every day.
Ohana Punch - Almost like a punch bowl squeezed itself into a bottle.
Orange - How much orange can you fit in a bottle? All of it. 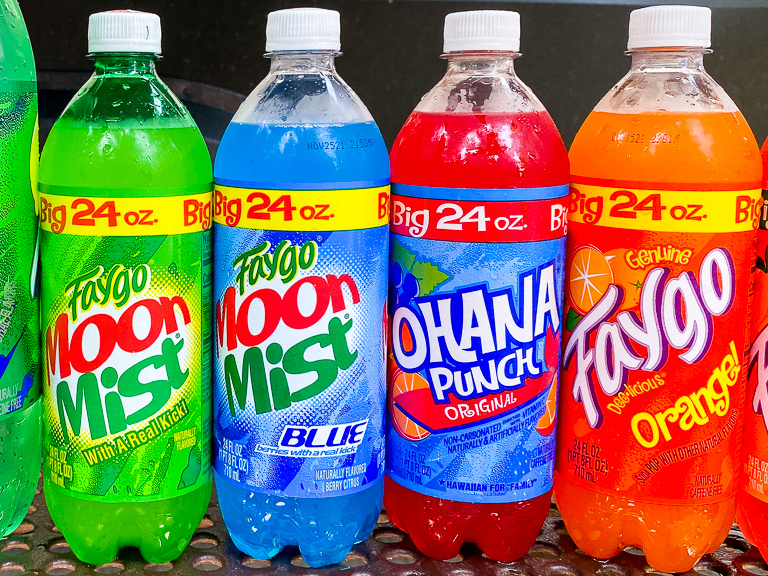 Peach - Each sip is like taking the first bite of a peach freshly picked from the orchard.
Pineapple - For those who want to get tropical without traveling very far.
Redpop - Packed with a hint of strawberry, and a whole lot more, this is one of the flavors that started it all.
Root Beer - Like drinking the feeling of the outdoors on a cool summer day. 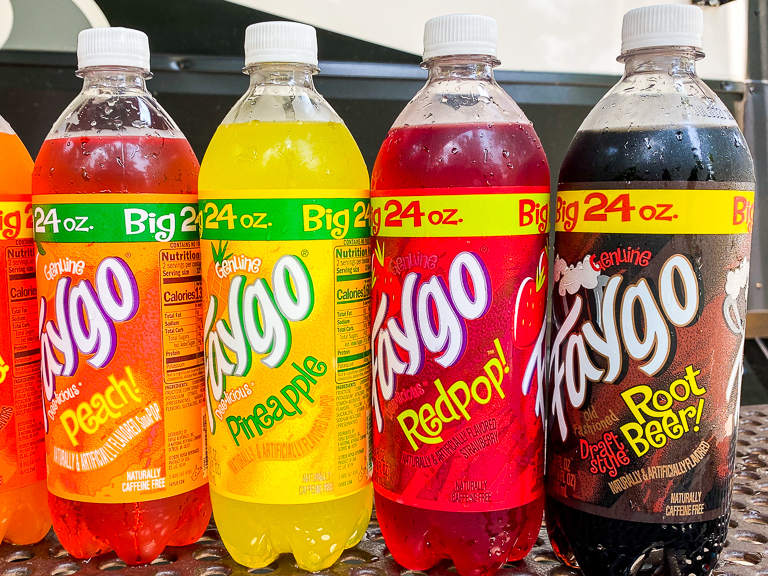 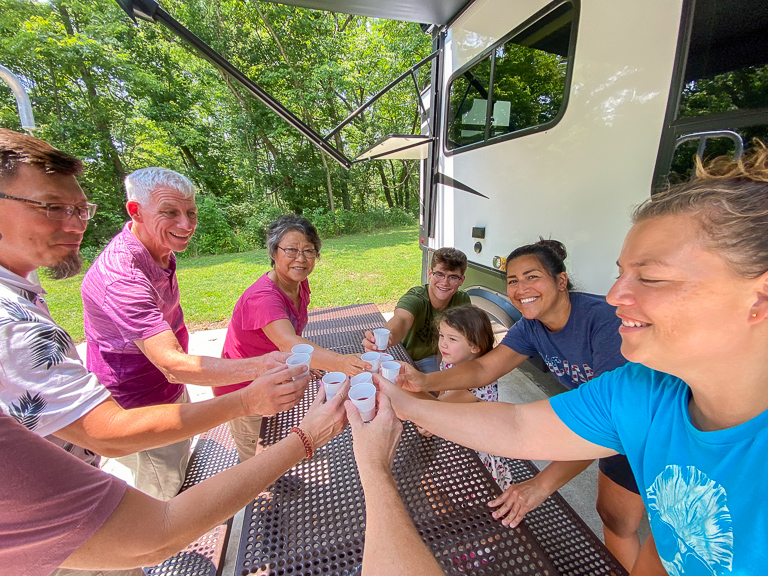 We tasted them in a random order, but I'll be going in the order I listed them above.

Candy Apple - Donald - I like this! Very surprising. Everyone was shocked on this one. It's not a green apple flavor. It's a different apple flavor. Amy - I like that. Tastes like a candy popsicle. Like maybe a Lemonhead Applehead flavor.

Cherry Cola - I do not like this cherry flavor. We usually like cherry cola but this one wasn't good. It's got an odd cherry flavor. Many shared my opinion.

Cola - Small carbonation. Little bubbles. Not Rita's favorite cola. It's not as good as Coke or Pepsi, but I'm not sure why. 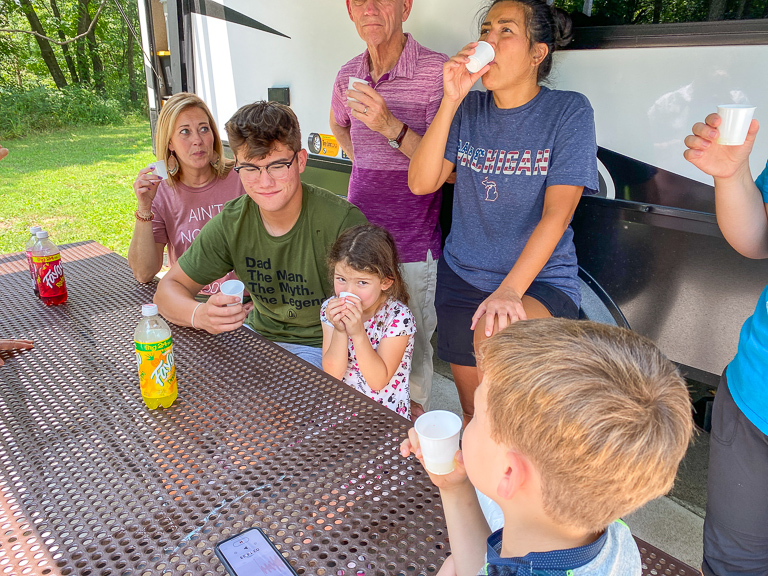 Cotton Candy - The one Ian was looking forward to most. But now it's his least favorite. He tossed it into the grass. Theresa thinks it tastes like carbonated cotton candy, and that's not a good thing for her. Very carbonated. Definitely tastes like what it's supposed to. I don't want 24 ounces of that, but I do like it. Donald agrees. It takes him back to his childhood.

Cream Soda - Does have a bit of fizz. Theresa loves cream soda. It's got a good vanilla flavor to it. Reminded me of IBC. Theresa and Rita both like the flavor and the carbonation. Rita - The cream soda was delish. Theresa - I want that vanilla cream soda in the fridge when we're done.

Ginger Ale - It's a light ginger ale flavor but a good ginger ale flavor. Has a whole bunch of carbonation. Donald thinks it would be great if you added another juice to it. Austin likes it a lot.

Chi, you can stop. You don't need to get sick. The rest of you do have to continue. 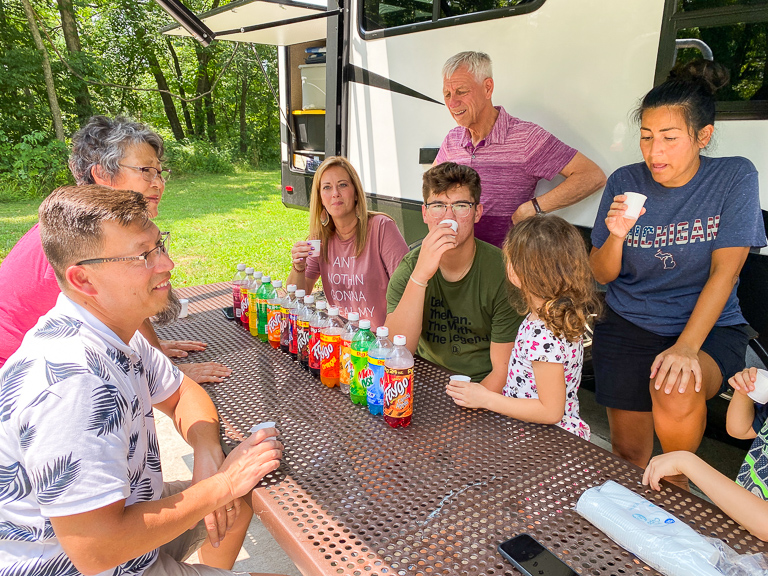 Grape - Donald's top 3. He chooses to buy Faygo Grape back home. It's a good grape. Alli - It tastes like medicine! Donald - No, try it, it's better. Joe - Actually Alli loves grape medicine. That's a compliment. Alli ranks it really high.

Raspberry Blueberry - Theresa just doesn't like blue drinks. They always have that blue icee flavor and she doesn't care for it. Austin confirms, this is a melted icee flavor. Ian's new favorite. Alli's second favorite. Not Donald's favorite.

Rock & Rye - People love this in Detroit. Cherry cream soda. Ty likes this back home. For some reason, Donald can't even drink this one. It's terrible to him. It's the first one he poured out. He rejects it. "It's like they messed up!" Theresa - They took all the nastiness and combined them into one drink. Donald - Like a suicide, where you combine all the flavors at a soda fountain into one cup. Ian and Alli hated it too. Austin thinks it tastes like medicine. Amy - I can handle the Red Pop better than the Rock & Rye.

Faygo Twist - Amy - I like it. It's got a Sprite kind of flavor to it. 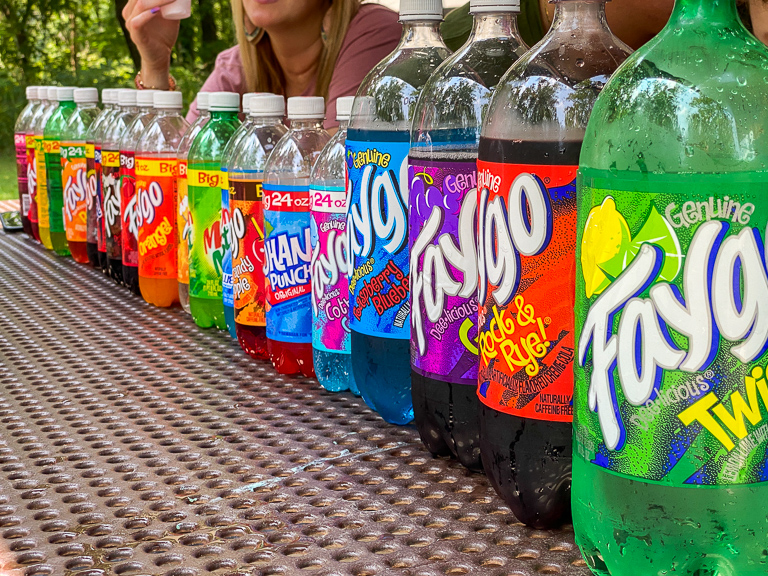 Moon Mist Green - Light carbonation. Like a lemon-lime. Austin's favorite so far. Despite having all this soda in his belly, he wants another cup of it poured for him.

Moon Mist Blue - Berry flavored. Ian - YUM! Austin's new favorite. He said he loves that flavor. Ian's favorite so far too. Theresa, Rita, Donald. No thank you. Rita - It's not for me. Theresa - Tastes like a melted slurpee.

Orange - No fizz here. Many liked the flavor. Like McDonald's Hi-C. 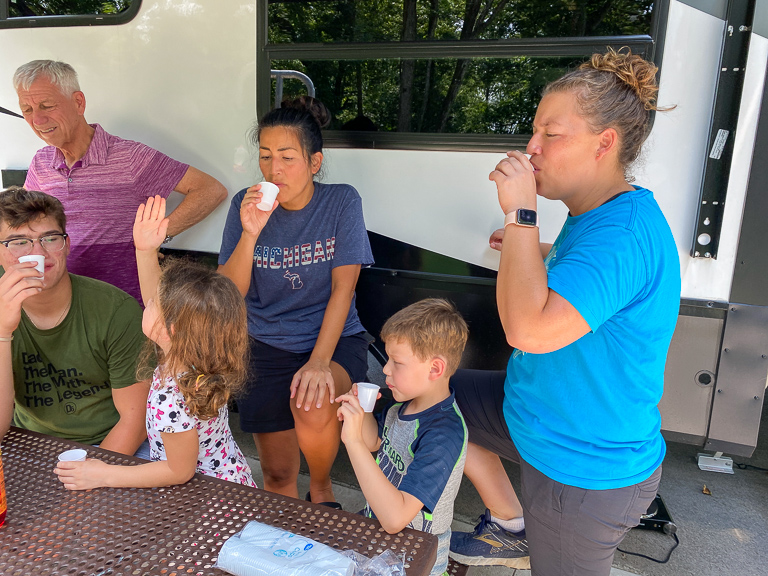 Pineapple - Donald is pumped to try this one. Smells really nice. Austin says it smells like a Dole Whip. Donald says it smells incredible. Very light carbonation. Like a juice almost. Everyone loved the flavor of this one. And yes, it tastes like a carbonated Dole Whip. Awesome.

Red Pop - Rita thinks it tastes like medicine. Theresa too. Looks like strawberries on the package. Ian is a fan. Alli loves it. Donald says people make floats out of this in Michigan. Austin says it's like the syrup from maraschino cherries, but in strawberry form.

Root Beer - Not fizzy enough for Rita. Smells like A&W. Rita is really missing the foam. She said the grape foamed even more than the root beer and that's just not right. Needs more bite. Similar to the sarsparilla we tried in Kansas. I would like a stronger flavor. 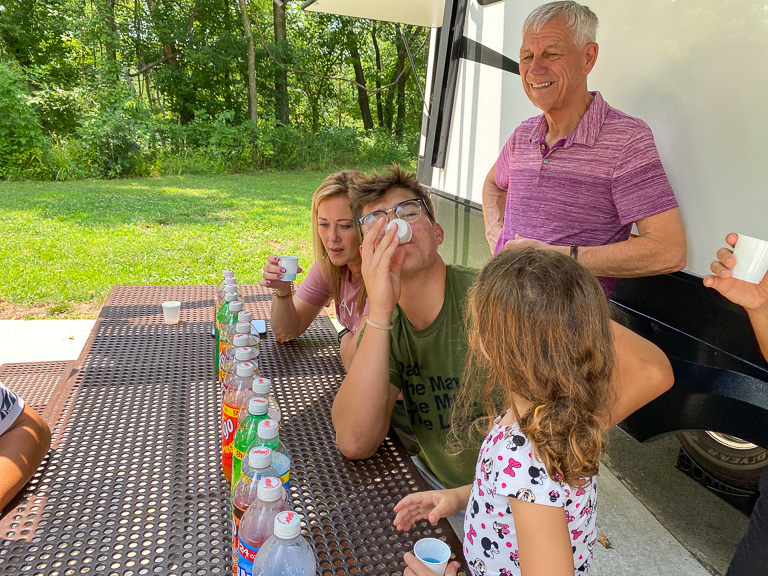 Whew, that was a lot of different flavors of pop to try! After all that, what were the favorites?

Second places for many were the Vanilla Cream Soda, Black Cherry. Surprises were the Candy Apple and the Cotton Candy. They tasted a lot better than people were expecting.

The worst were Red Pop, Cherry Cola, and a special callout for the Rock & Rye.

Looking at the Faygo website there's still some more flavors I want to try. Fireworks (like a bomb pop, cherry/lime/blue raspberry), Pineapple Orange, Pineapple Watermelon, Strawberry Banana, and Kiwi Strawberry. I'll be on the lookout for them in the future!