Time for another pizza day! I'm still trying to theme it to the location that we're visiting at the moment and today we're in North Carolina! And there was really no question about what kind of pizza this was going to be. North Carolina BBQ Pizza!

You might have had BBQ before, but have you ever had real North Carolina BBQ? When I lived here previously, my family would always go to Bill's BBQ in Wilson NC. Bill's closed back in 2017 after being open for nearly 56 years, so I can't get it from there, but you can't forget the flavor. Even after we moved away from North Carolina my dad would still make North Carolina BBQ for us. Today I'm going to try making it myself.

Instead of being tomato sauce based like most BBQ you might be familiar with, North Carolina BBQ is vinegar based, giving it a very different taste. Let's make some pizza! 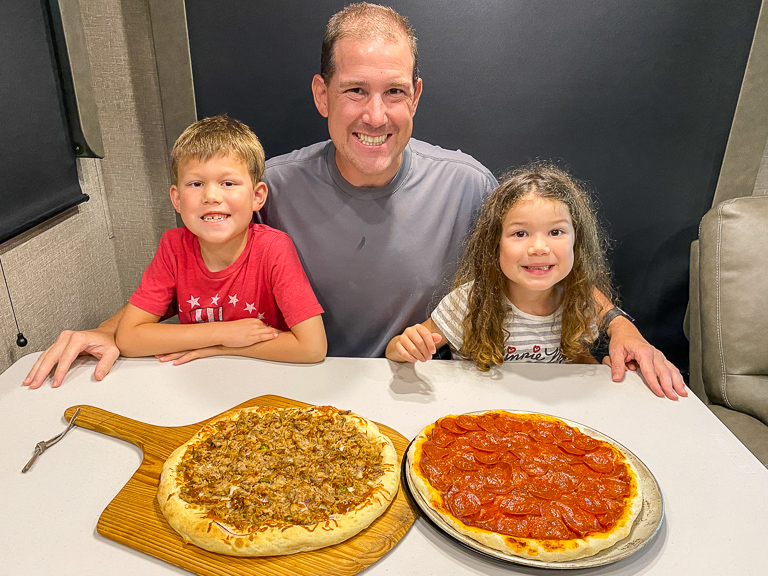 For this recipe I'm going to need a pork shoulder, salt, pepper, and why not add some MSG in there for good measure. 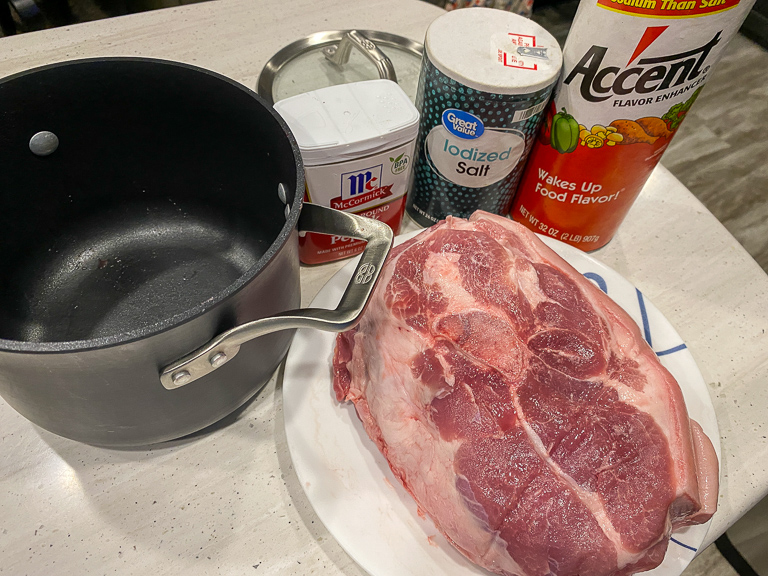 I put everything into a pot and then added 1.5 cups of vinegar to it. 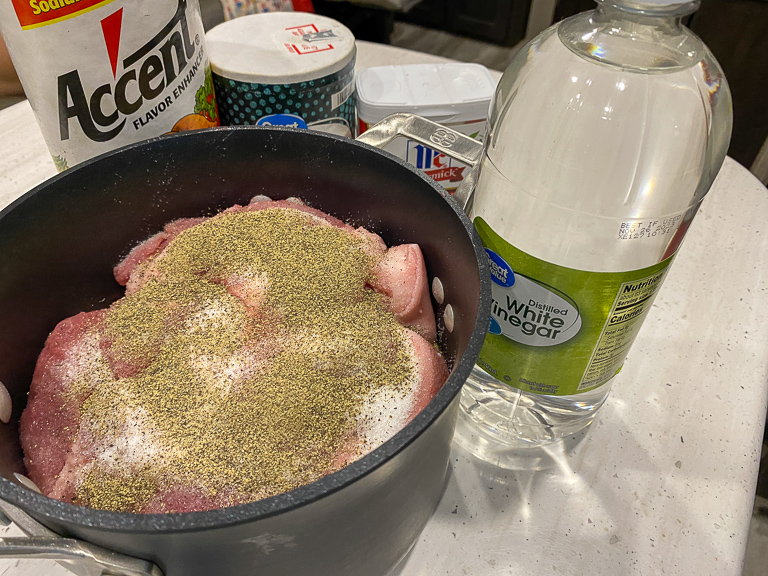 That's all the liquids this is going to get. 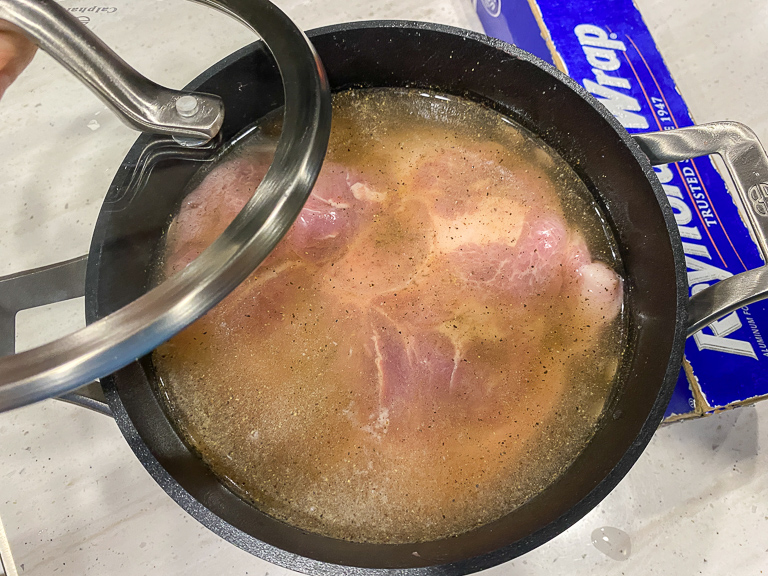 I don't have to luxury of a crock-pot in my RV. Instead I have my oven-safe cooking pots and lids. I added aluminum foil to make a tighter seal. 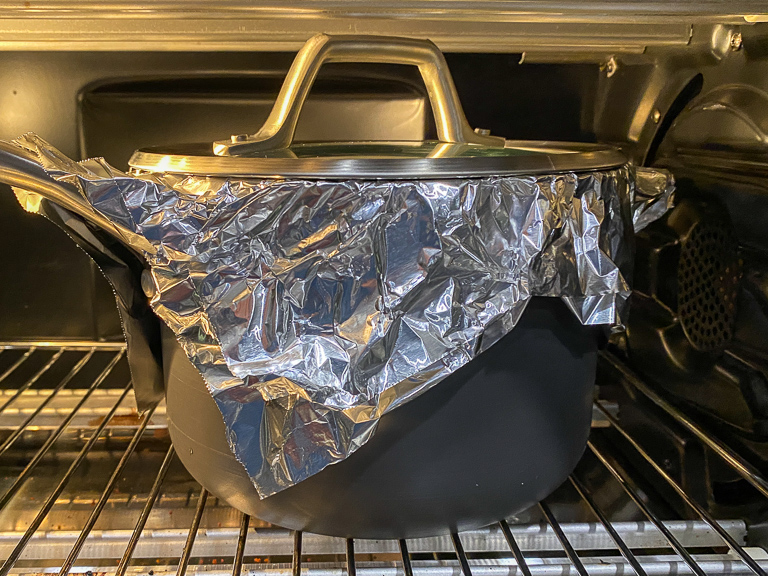 My pizza toaster oven has a bunch of different settings, including a Slow Cook mode! Sweet! This is supposed to cook on low for 12 hours, so I set it before I went to bed and by the morning the whole house was smelling delicious. 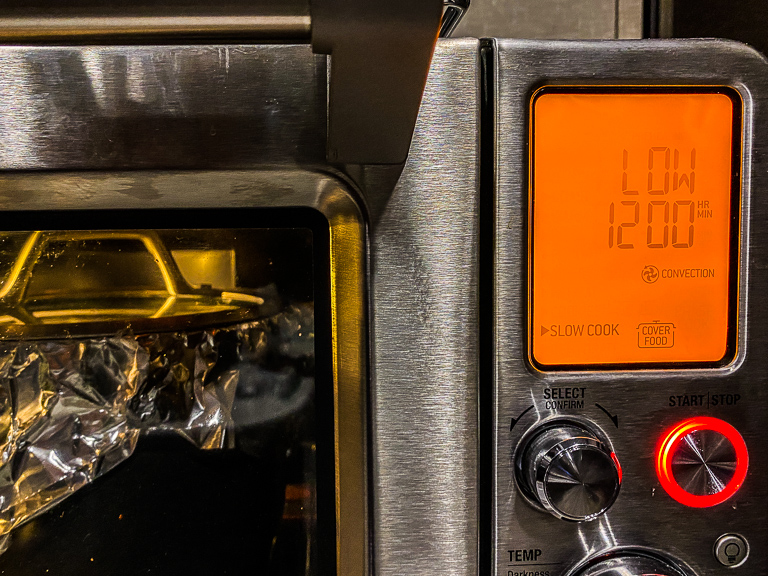 Slow cooking does wonders to this meat. All the fat renders beautifully. I poured the tasty liquid into a bowl for use in my pepper sauce. 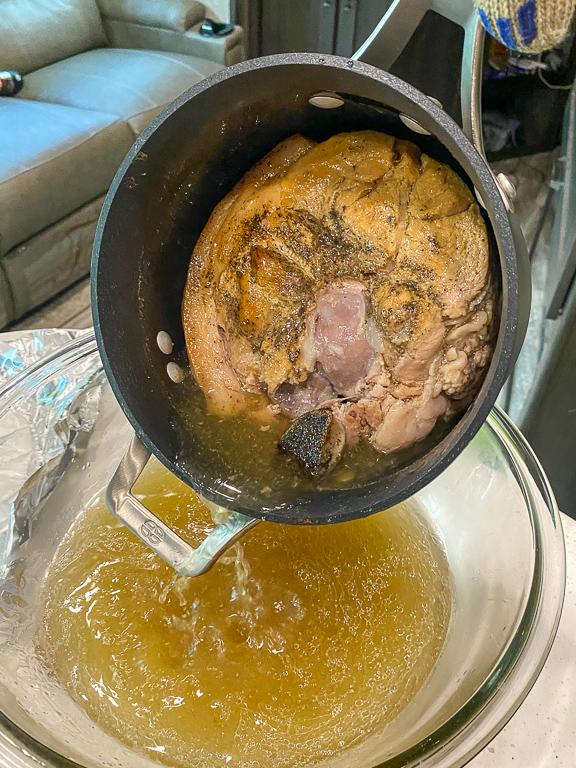 It used 2 cups of the liquid plus brown sugar. 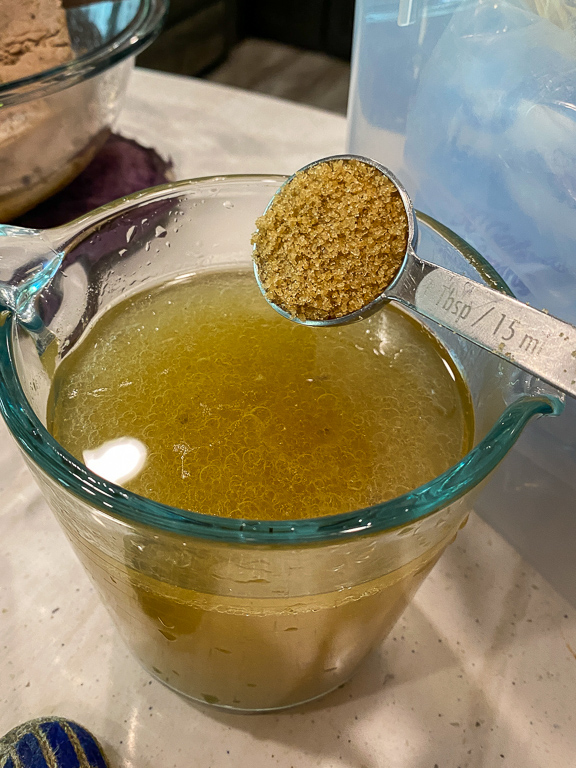 As well as hot sauce, red pepper flakes, and cayenne. I tried a bit and it was spicy but very tasty. 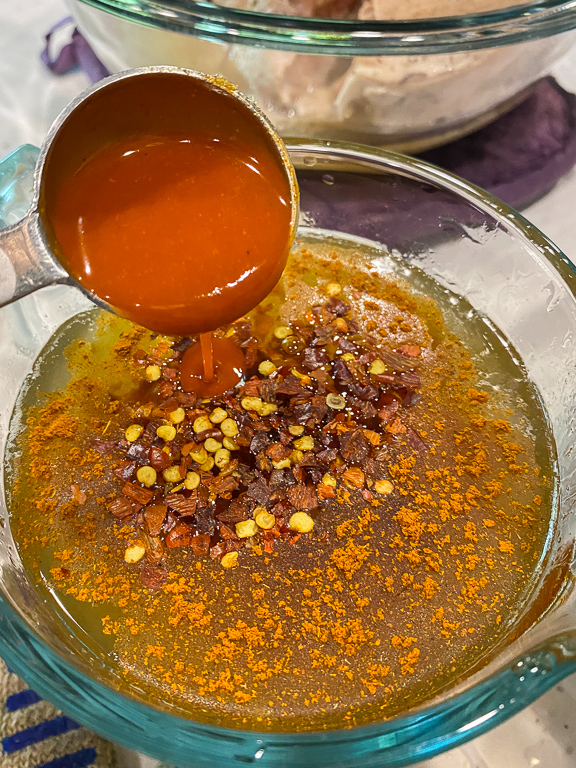 This pork shoulder is just falling apart whenever I grab it with the tongs. The bone pulled right out. 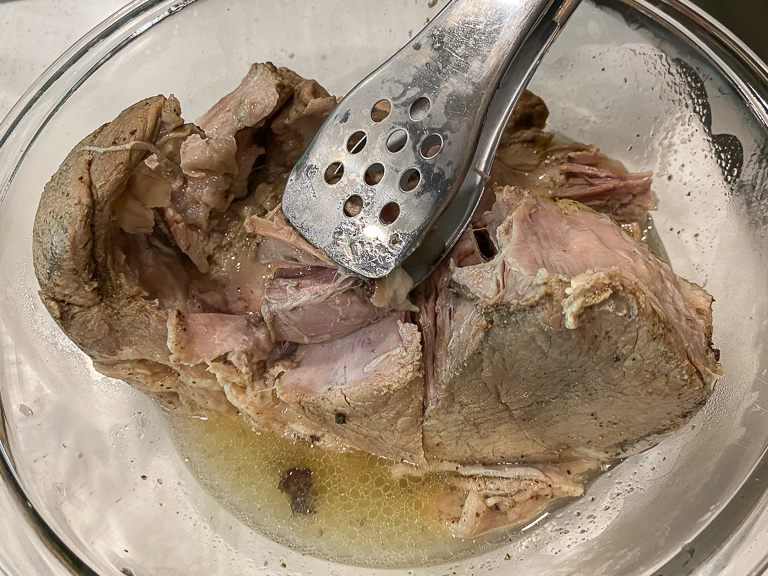 Theresa is in charge of picking the fat out of the meat and shredding it to bits. I did notice a few pieces that must have needed tasting while all this was going on. 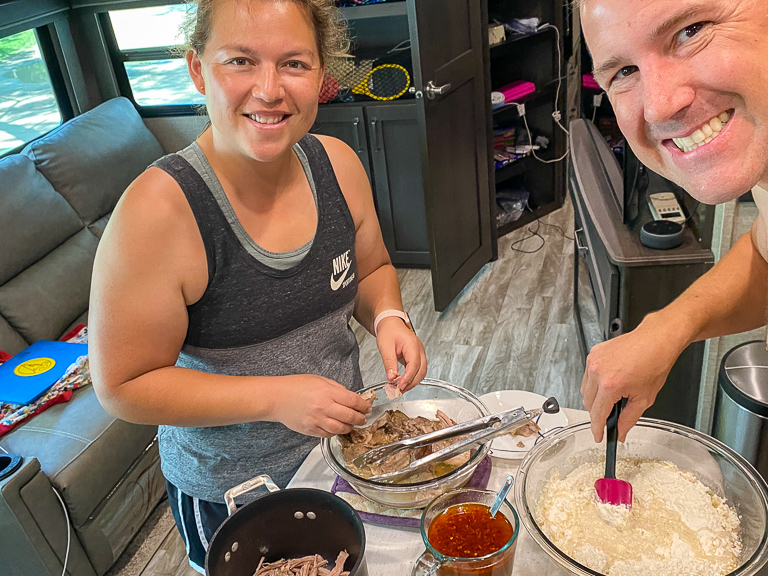 Once the meat was shredded, I used half of my pepper sauce liquid and poured it over the pork. The meat is ridiculously tender and the sauce adds a fantastic tangy vinegary flavor. 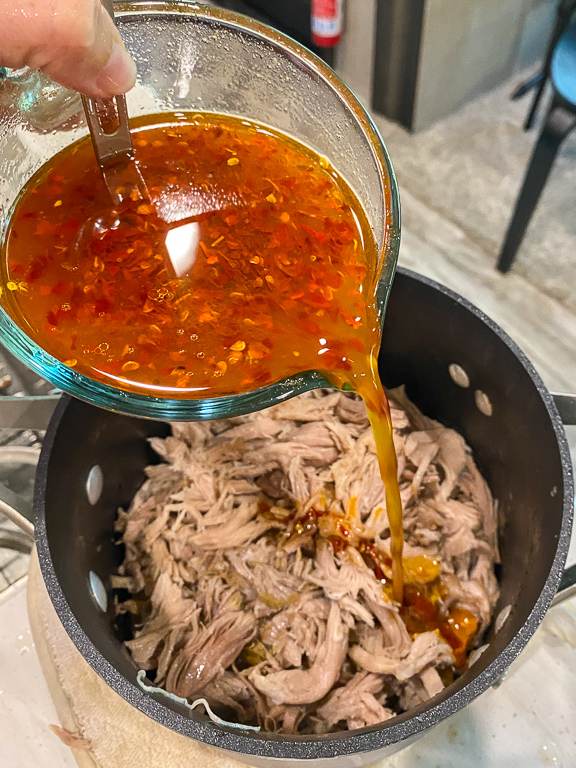 This went back into the pot and into the toaster oven on Warm until I was ready for it. 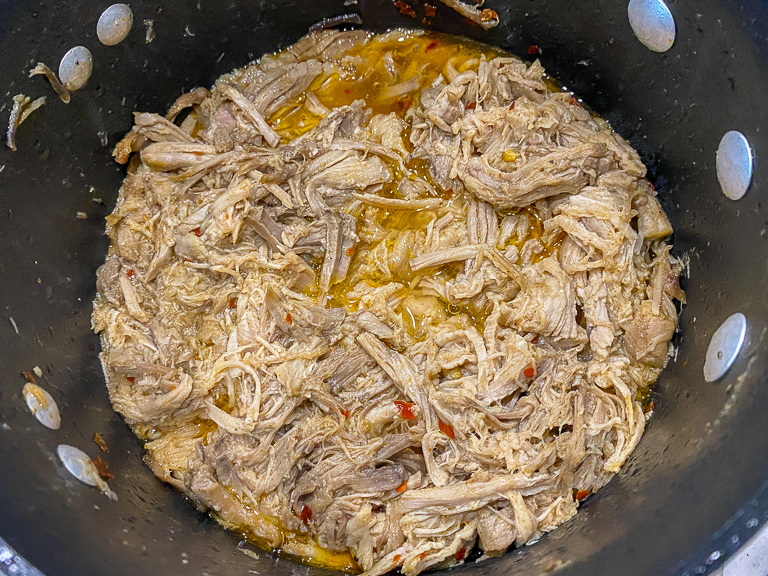 Even though it's a little spicy, Alli do you want a taste? She's usually good to try anything once. 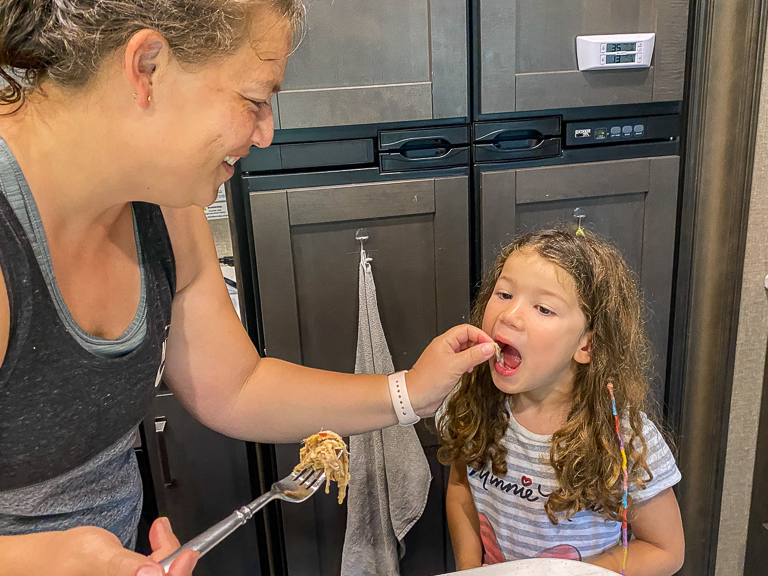 It's definitely okay! It's a tad spicy for her, but she's alright with it. 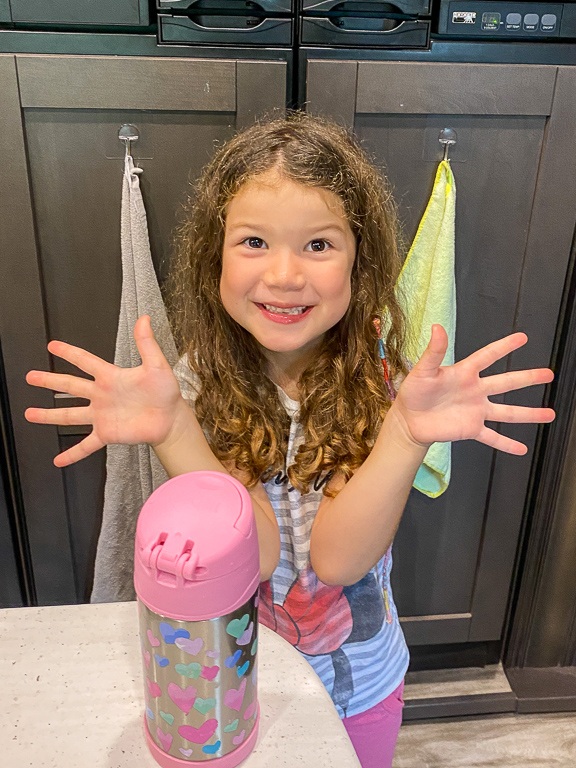 For the other half of that pepper sauce, I'm making a reduction that I'll drizzle onto the pizza. I boiled off a bit more of the water, added some corn starch, then let it sit to cool. If the pork was spicy, this was even hotter. I love it! 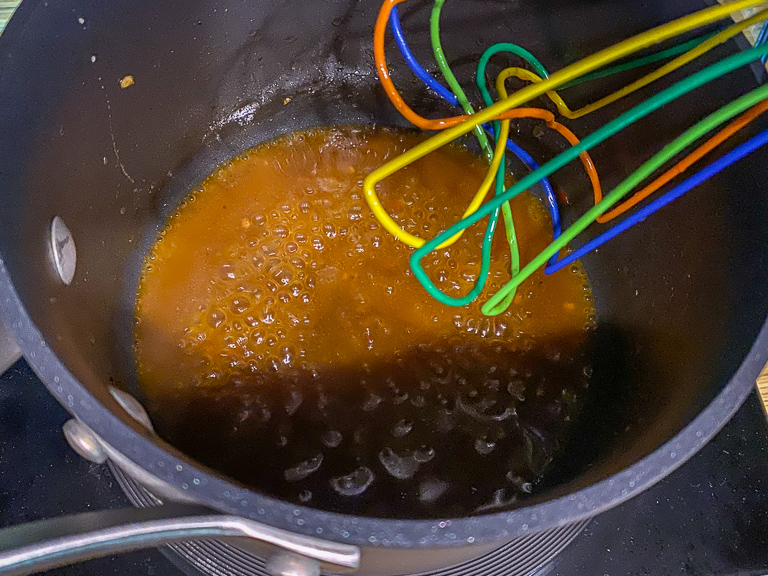 I was debating on what to put on my pizza. There's lots of different sides that you can have with Carolina BBQ. Macaroni salad, potato salad, coleslaw, fried okra, baked beans, and more. In the end, I decided to just let the pulled pork be the star and have some red onions and jalapeños. I also skipped the tomato sauce base, and just oiled the crust and added mozzarella cheese. 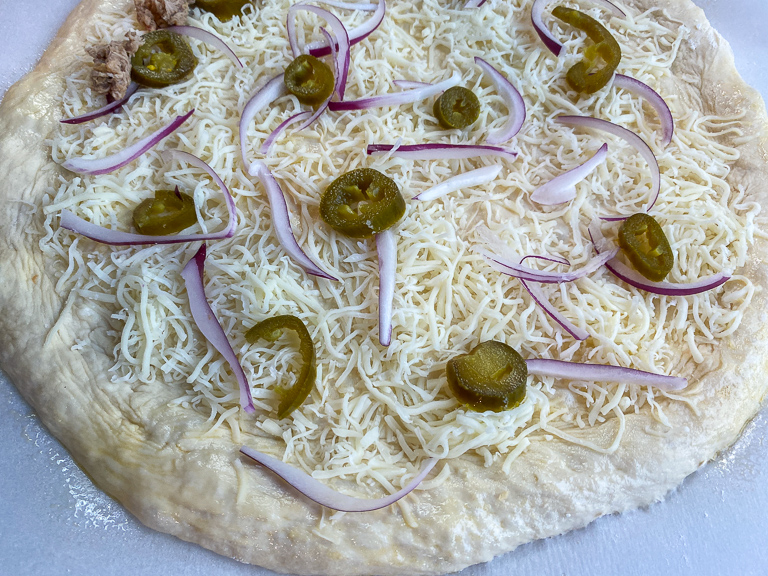 Theresa saw me cutting up the pork and asked "You're using that much?" Absolutely. No one is going to say I didn't have enough BBQ on my pizza. There was still plenty in the pot for leftovers. 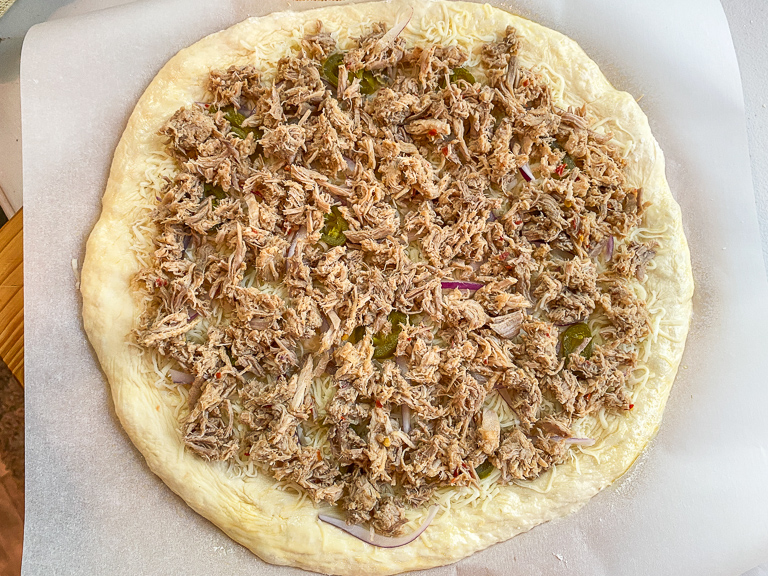 Ian said he wanted to help with his pizza tonight, and of course I'm all for that! 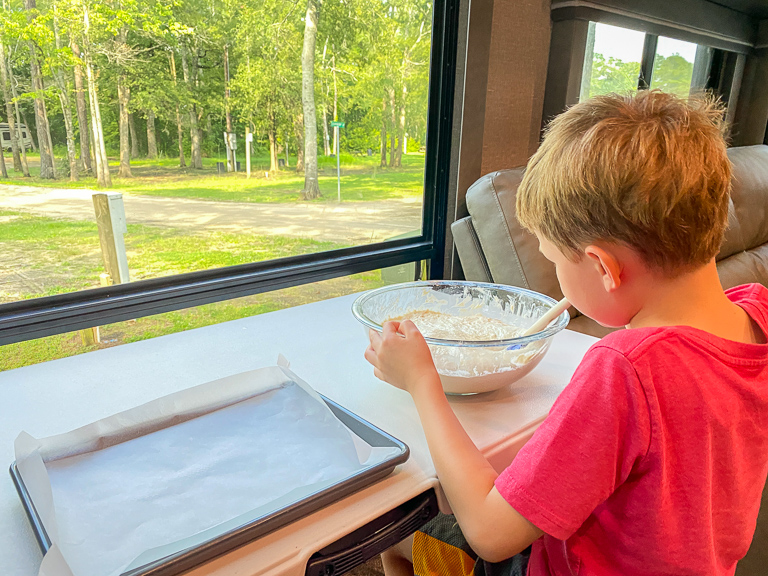 First we pressed the dough out into a round shape. 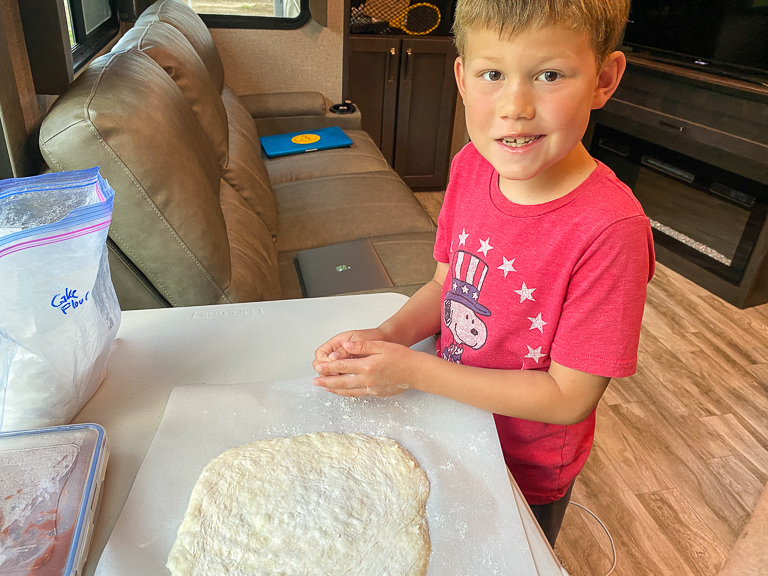 He added some pizza sauce to it and spread it around. 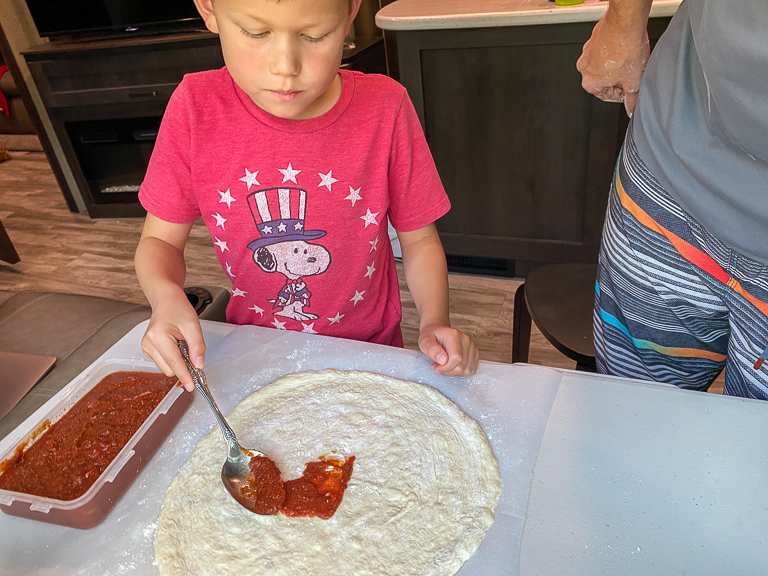 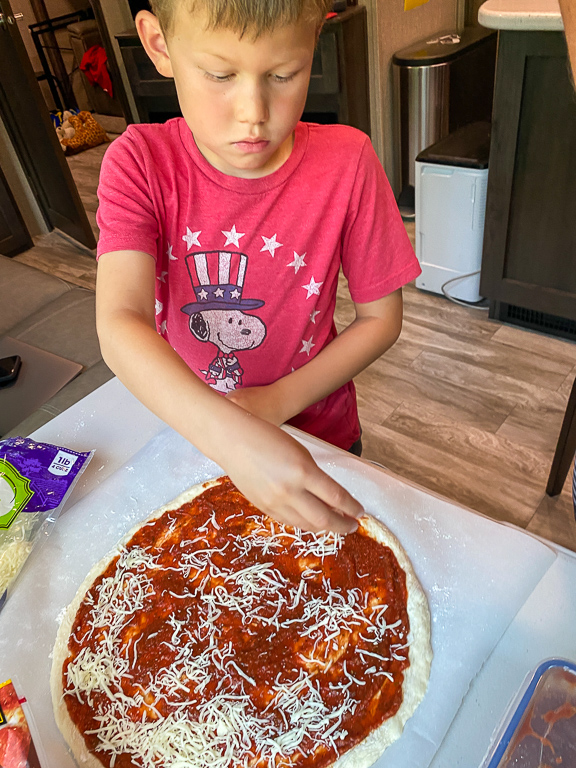 Alli saw him making pizza and ran to grab her iPad.
Alli - I've got to get a picture of this. Do you want me to send it to you Daddy?
Of course I do Alli.
How many pepperonis is enough Ian? 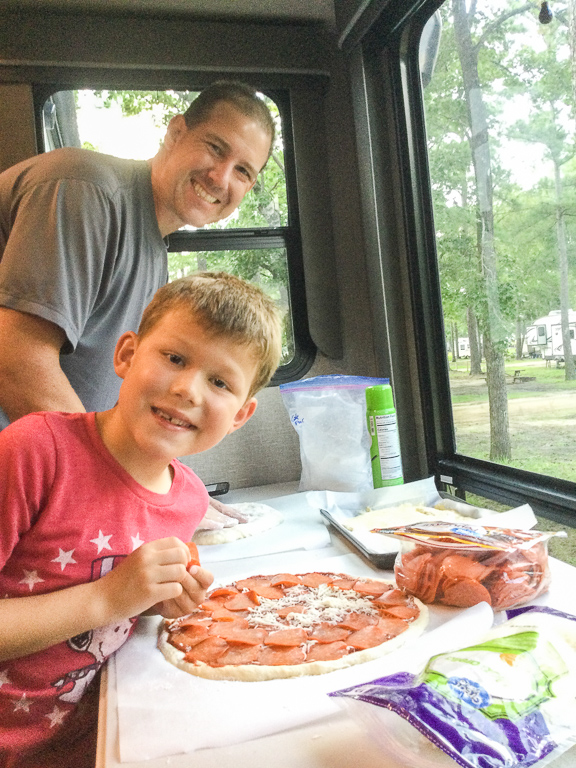 Well, this is what you get when you turn your back on a 1 pound bag of pepperonis and a boy who loves them.
Into the oven it all goes, along with my pulled pork pizza. 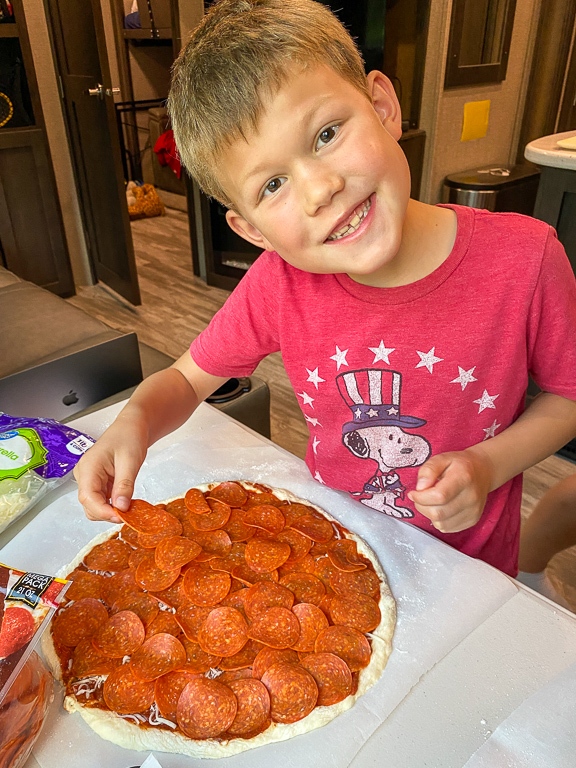 Well doesn't this look tasty! The pizza cooked up fantastically. 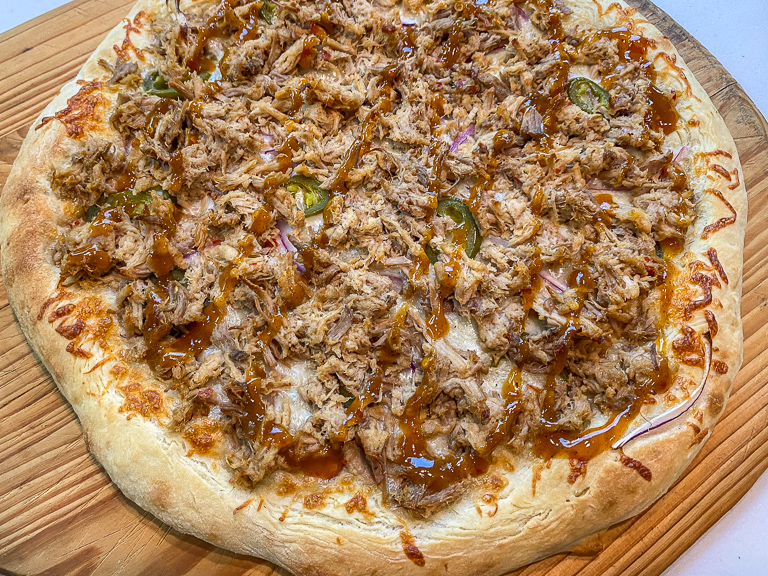 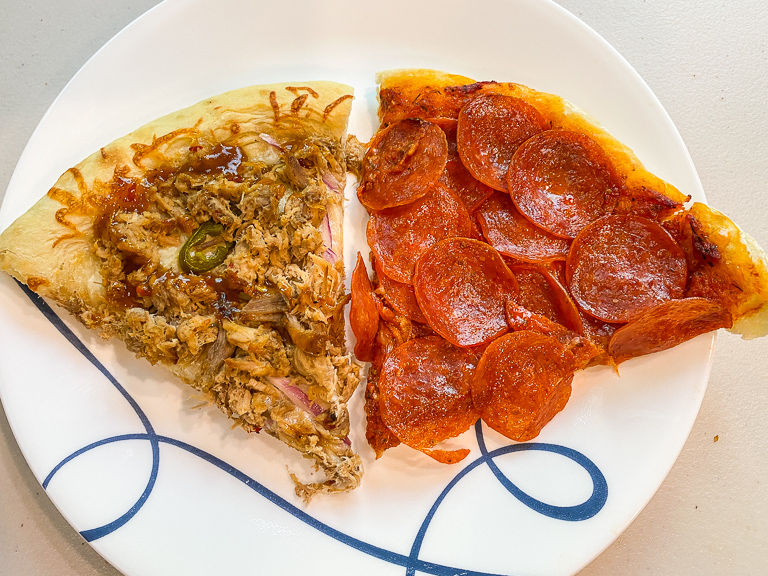 North Carolina BBQ is pretty tasty on its own... but on a pizza it might be even better. This turned out so good! The pork is still fall-apart tender and has a vinegar kick to it. The sauce drizzle adds a welcome heat. And if there were any shreds of pork sticking up too high, they got a nice crispiness to them. 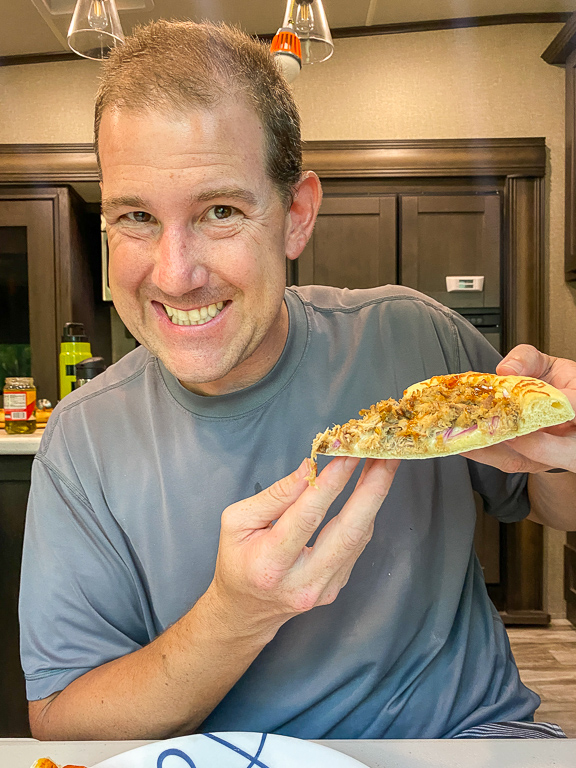 The past couple weeks Theresa thought the components of the pizza were better than having everything combined. Today though she said everything worked together very well and I got a thumbs up. She even went back for a second slice!
And Ian loved his pepperoni pizza too, having 3 slices of it all by himself. 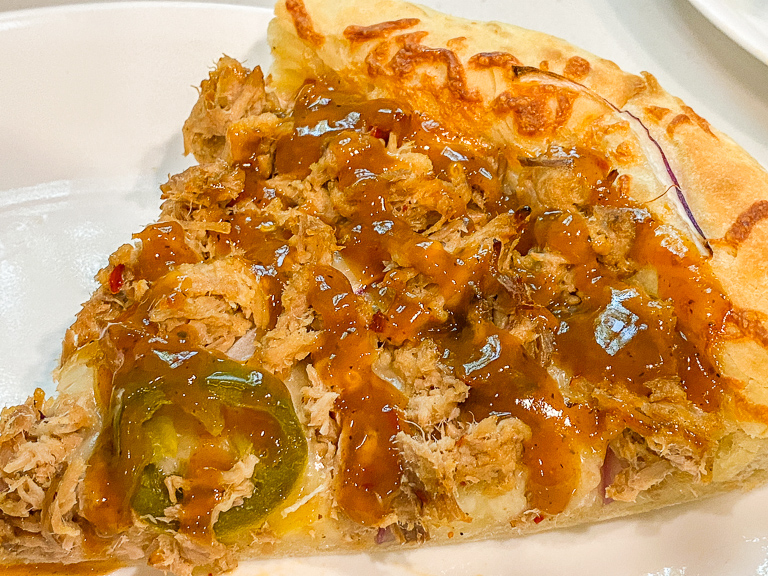 Alli likes my new plan of taking any leftover dough I have and making breadsticks. Give her some honey or pizza sauce to dip it in and she's a happy camper. And why two salads? So she can have two different salad dressings, of course!
North Carolina BBQ pizza was a success tonight! I'm going to have to make this one again when I go back home to see my family. They're going to love this one! 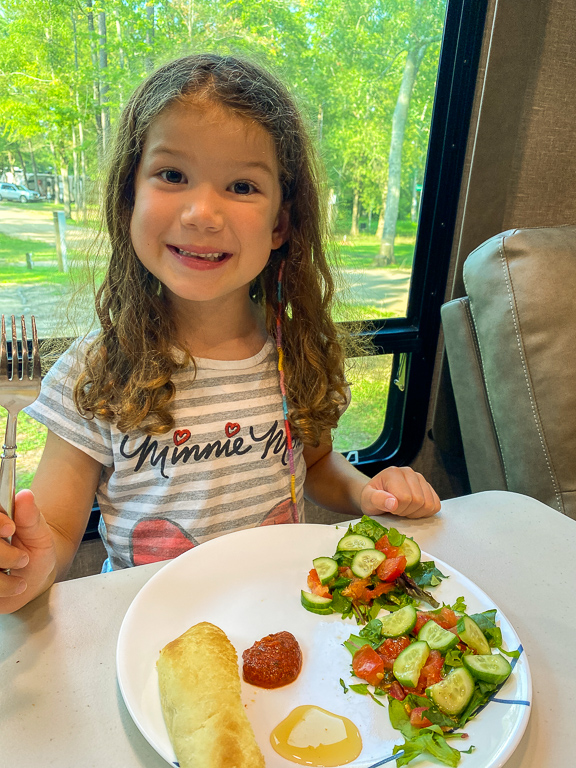