It's Sunday and we're in a new location! This week us and the RV are in Virginia, right alongside the Chesapeake Bay! And you know that Chesapeake Bay is very famous for their Crab Cakes. That's why this week for my state themed pizza, I'm making... Virginia Ham! I hate seafood. 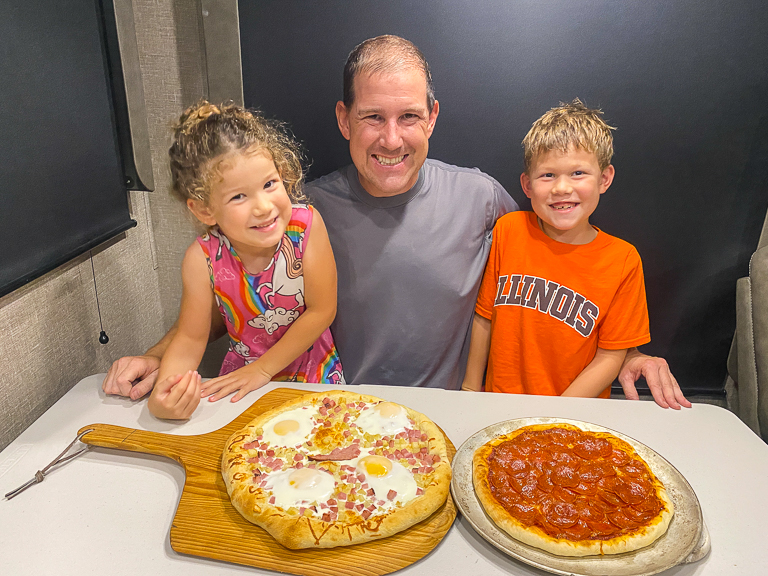 I was having a difficult time finding Virginia Ham at the grocery stores we went to. We tried going by a couple farmer's markets to see if anyone was selling meat there, but no luck.
Eventually I found something in the deli section of a store, though I'm a little disappointed it's Virginia Brand Ham and it's made in North Carolina. 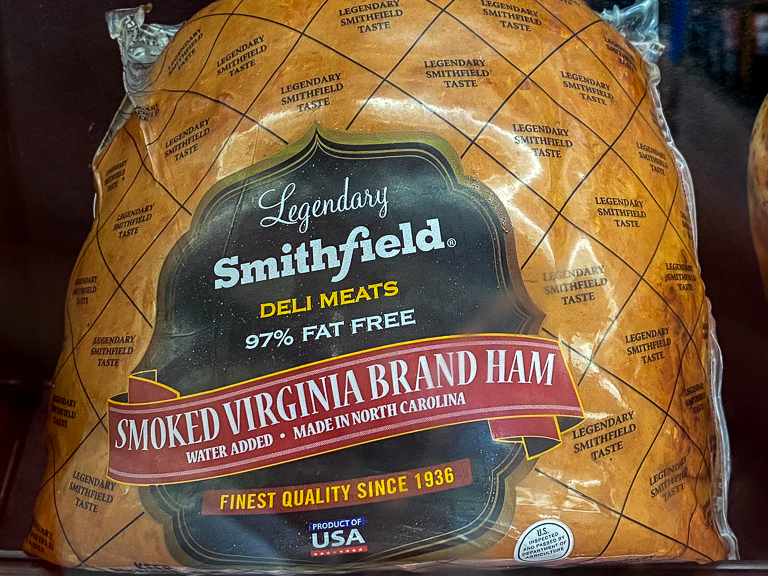 At least the potatoes I'm using are from Virginia.
For today's pizza, I wasn't wanting to pair it with pineapples or anything like that. We could treat it like a dinner ham and use those kinds of sides on the pizza. But if we're ever at a breakfast buffet and they have sliced ham, I'm always getting a few pieces. I'm going to treat this like a breakfast pizza and add the typical breakfast accompaniments. 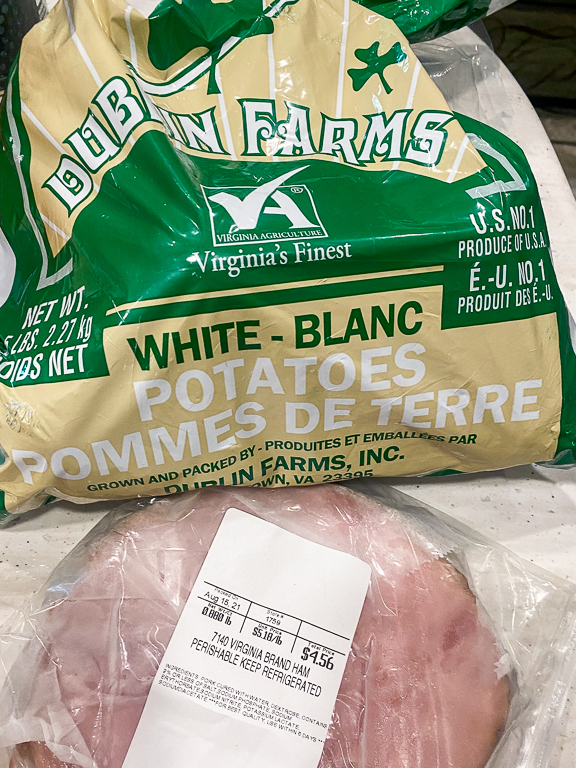 I peeled and diced my Virginia White Potatoes, and tossed them in a hot pan with oil. 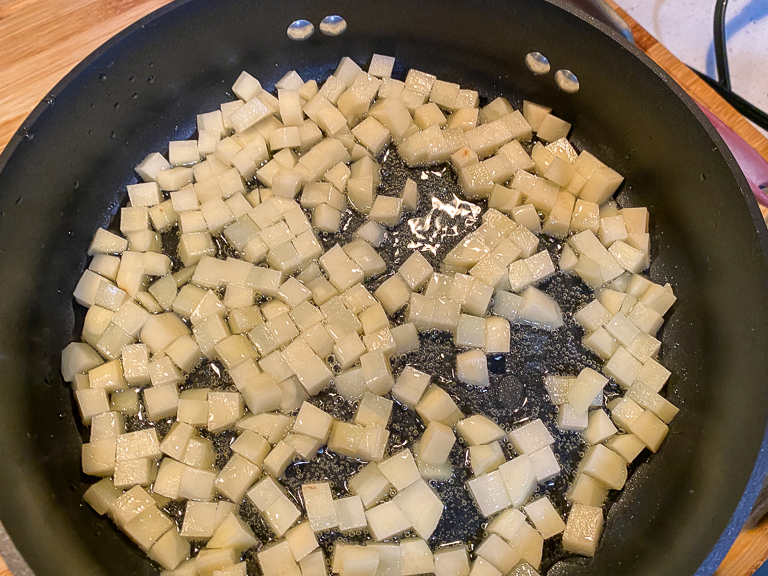 As soon as I was satisfied with them, I pulled them out, then added salt and MSG. I caught Theresa snacking on a few and she was especially impressed with them.
Theresa - These are probably the best fried potatoes I've ever had! You've got to try them. If you made these for me every day, I could never stay on a diet.
Mmm. Oh yeah. These are pretty delicious. She brought a few to the kids and they were also impressed.
Kids - Daddy, can you make these more often? 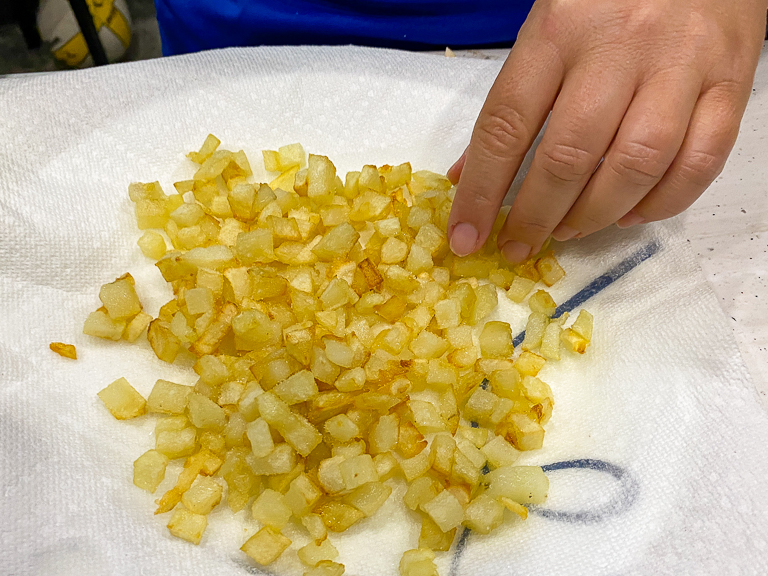 I made a batch of my usual pizza dough, stretched it out to the shape I wanted, coated it with oil and then cheese. Then I topped it with my potatoes and ham. 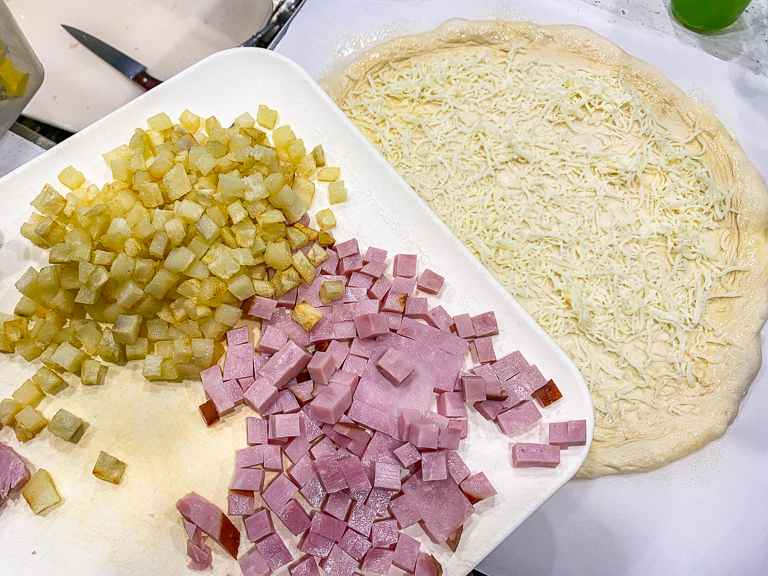 And just to emphasize the point a little more, there's a Virginia shaped piece of Virginia ham in the center. 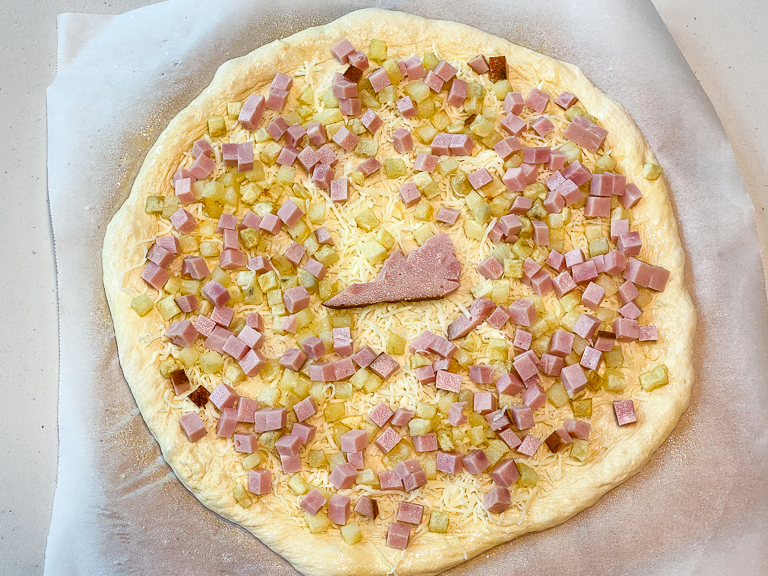 While it's been in the 90s outside, with a real feel over 100 degrees, the AC in our RV is running constantly and keeps it a cool 75. Not the greatest for letting my pizza dough rise. Even after all the toppings are on it, I like to give it 10-15 minutes to rise again. The middle of the truck is perfect for letting this proof again! 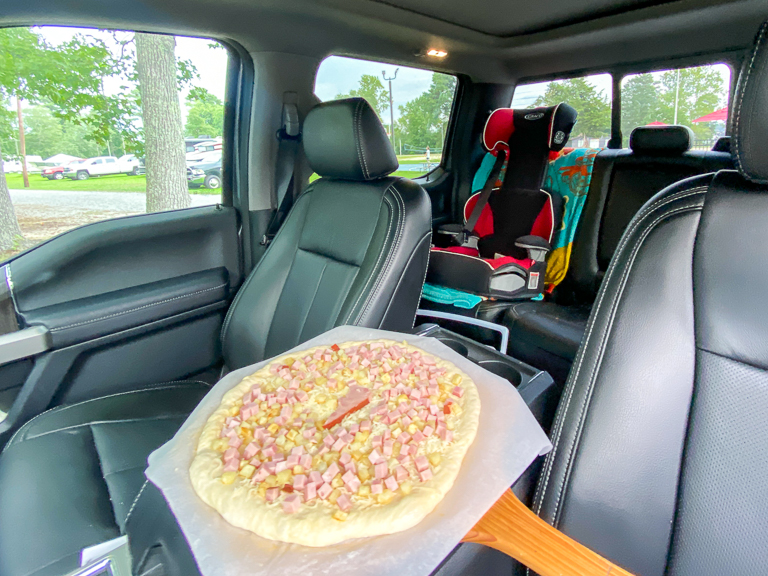 Because this is a breakfast pizza, and because Theresa requested it, I'm going to crack a few eggs on top of this Virginia Ham pizza too. Previous pizzas I've done this to, I only used 1 egg. That wasn't enough for any of us, so I'm stepping it up and using 4 eggs today.
I waited until there was 5 minutes of cooking time left before adding the room-temperature eggs to the top. 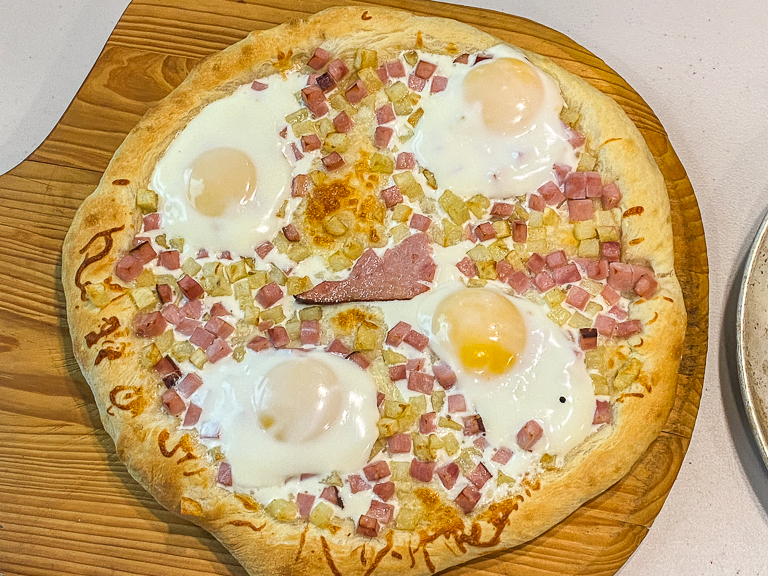 And was rewarded with a perfectly runny egg on my pizza. Yum! The runny egg adds a delicious richness to the overall flavor of everything. 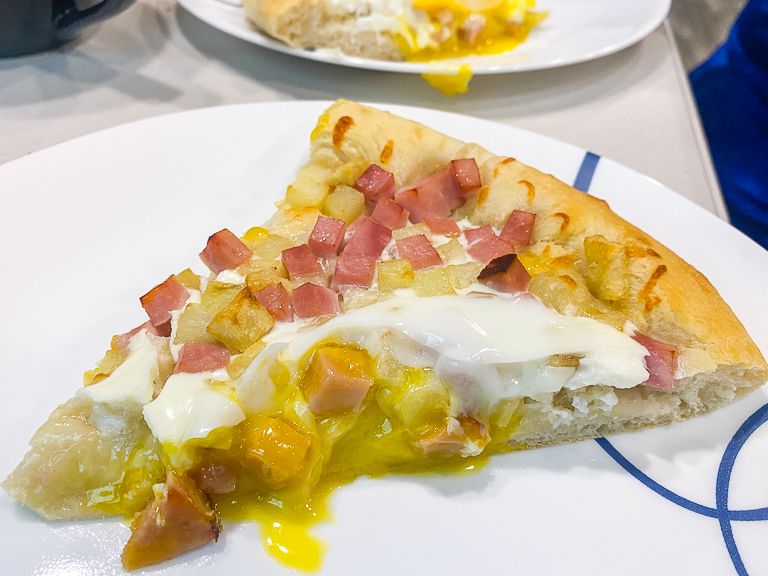 Alli gave me a thumbs up, saying it was pretty good. But she was content to go back to her breadsticks and dipping sauce. 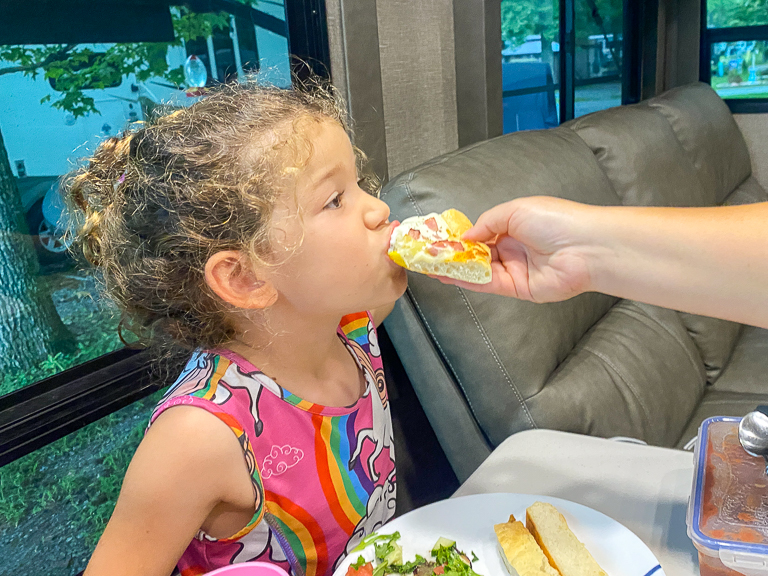 I thought the pizza was delicious! I can see why Theresa likes it without tomato sauce. You can taste the other ingredients so much better. The Virginia ham was a little sweet and savory, the potatoes added a good saltiness, and the egg gave it a satisfying richness. This was a good pizza.
But Theresa said that even more importantly, now we know you can make fried potatoes, so we can have that more often too. 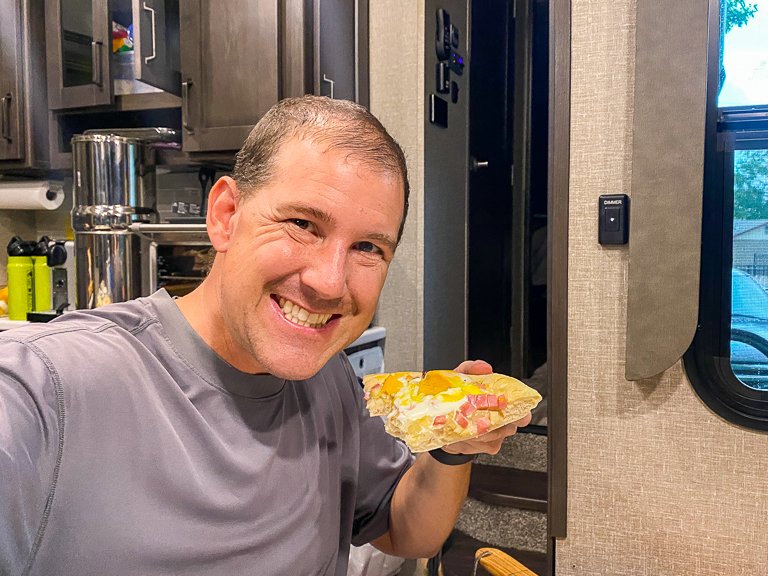