It's time for another Starburst taste test! This time it's Starburst Drink Mix and we'll be trying three different flavors.

We'll see how it stacks up to the Starburst Yogurt, Starburst Gelatin, Starburst Gum, Starburst Fruit by the Foot, and Starburst Strawberry Sorbet bars that we've tried previously. 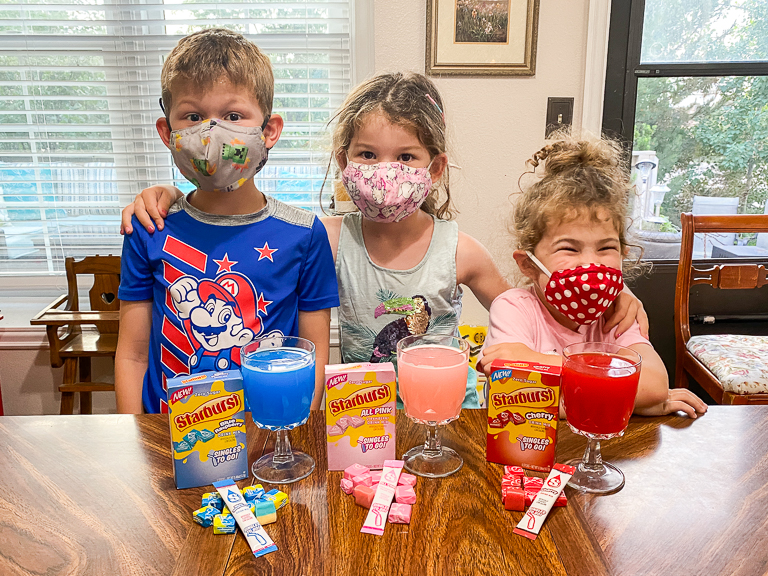 There's three flavors we're going to try today. Starburst Blue Raspberry, Starburst Strawberry, and Starburst Cherry. I collected these over a few weeks from multiple grocery stores. I've seen that a Starburst Lemon Drink Mix exists, but I haven't been able to find it.

Since we've got Avery with us, she's going to get first pick. And in a surprise to no-one, she's picking pink to go first!
The color of the drink mix matches pretty well to the Pink Starburst. It's most everyone's favorite Starburst flavor. Let's see how they did getting the drink mix to taste like it.
Thank you Mom for the glasses in this taste test. It was one of their wedding presents, so these glasses are even older than me! 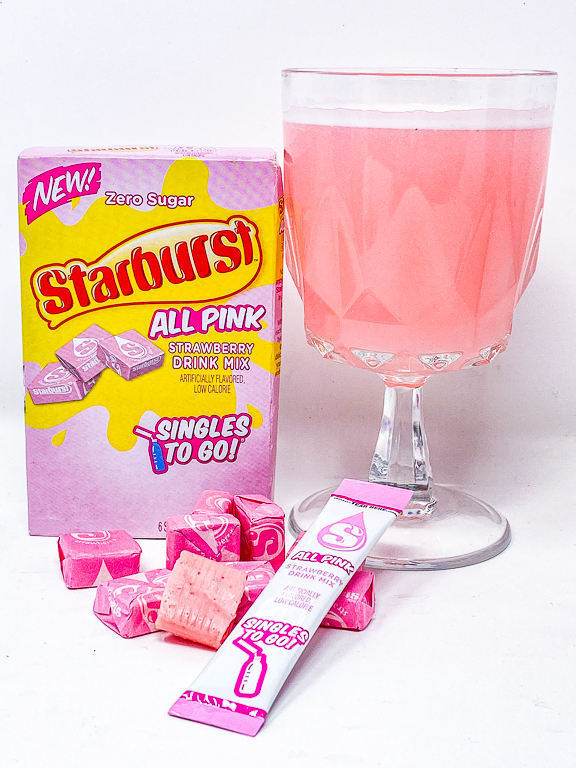 Everyone tried the Starburst chewy candy to get a feel for what it should taste like, and then tried the drink mix next. So, how did Strawberry fare? 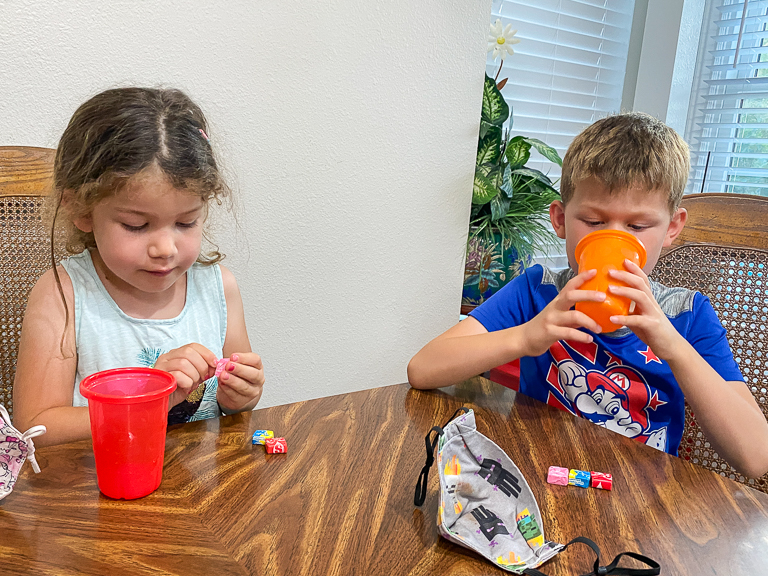 Um, what? This doesn't taste like Starburst Strawberry. I don't even think it tastes like good strawberry drink mix.
Ian - They didn't quite get the flavor right, but it's still good. 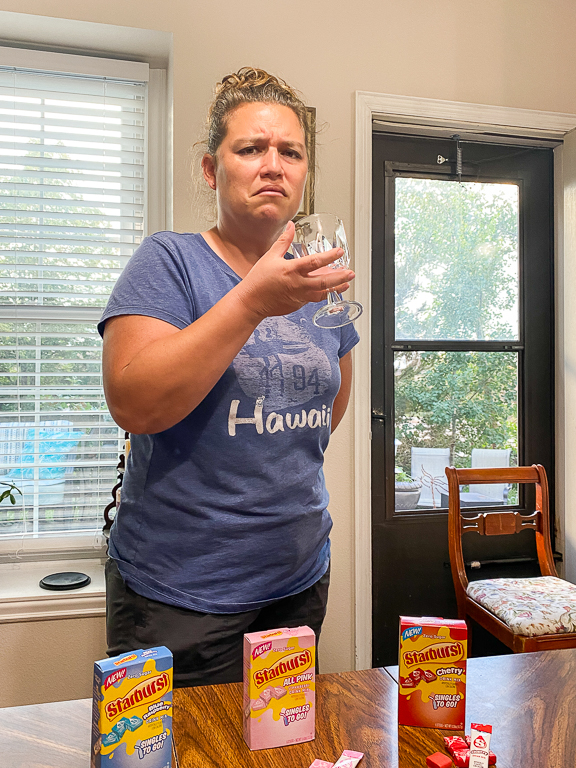 Alli took the next pick and chose the Starburst Blue Raspberry. We've run into this problem before when we had the Starburst Gelatin. Blue Raspberry Starburst just aren't a regular flavor for them. The only thing I've been able to find is the Starburst Duos where it's half blue raspberry and half lemonade.
For this one, the color does not match up to the candy so well. The drink is a bright blue. 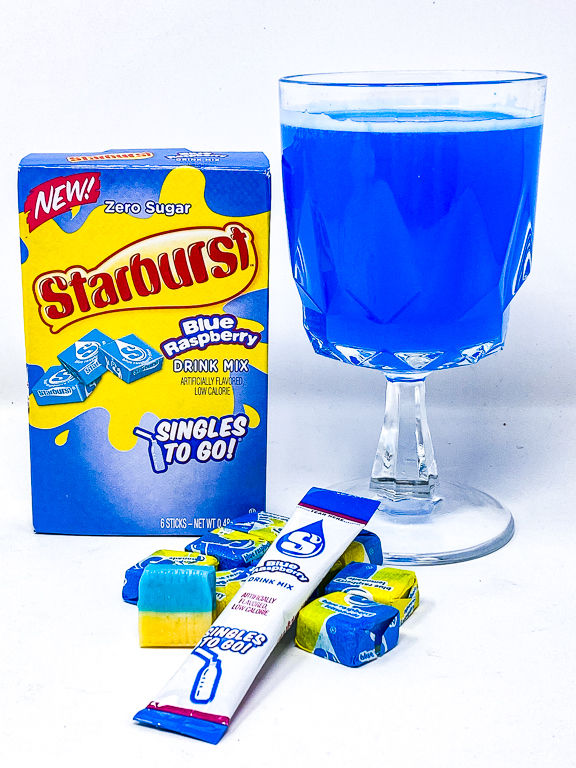 The chewy candies are good. 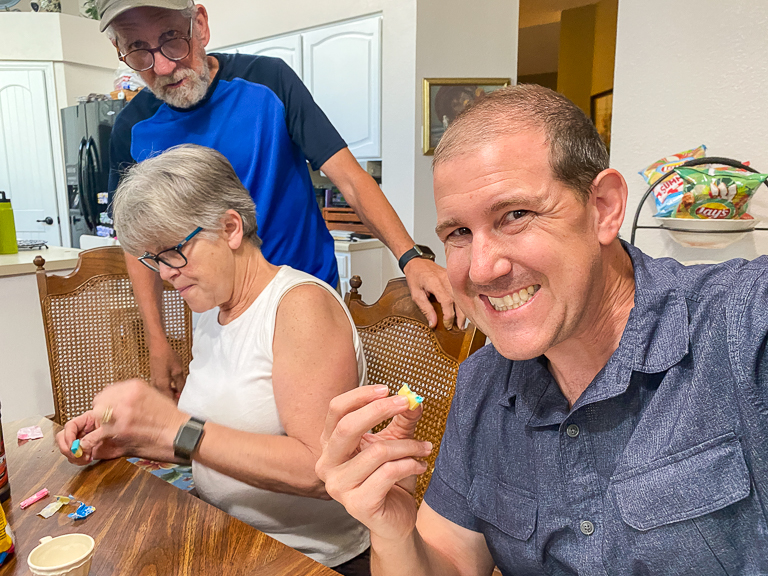 Thumbs up from Avery. 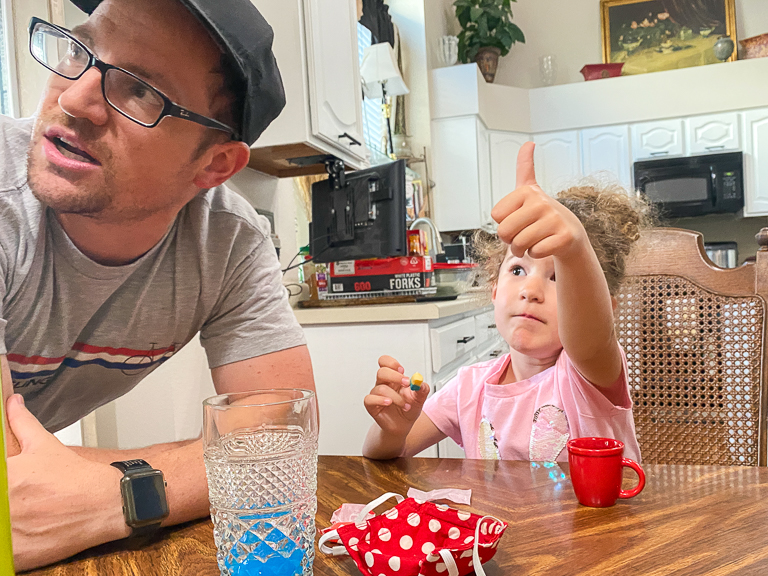 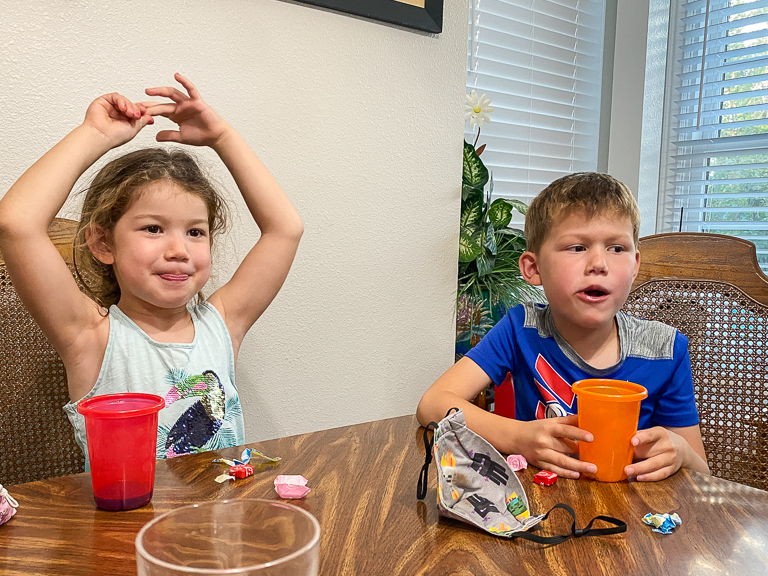 To get extra blue raspberry flavor, Avery is dipping her candy into her drink. Yum! 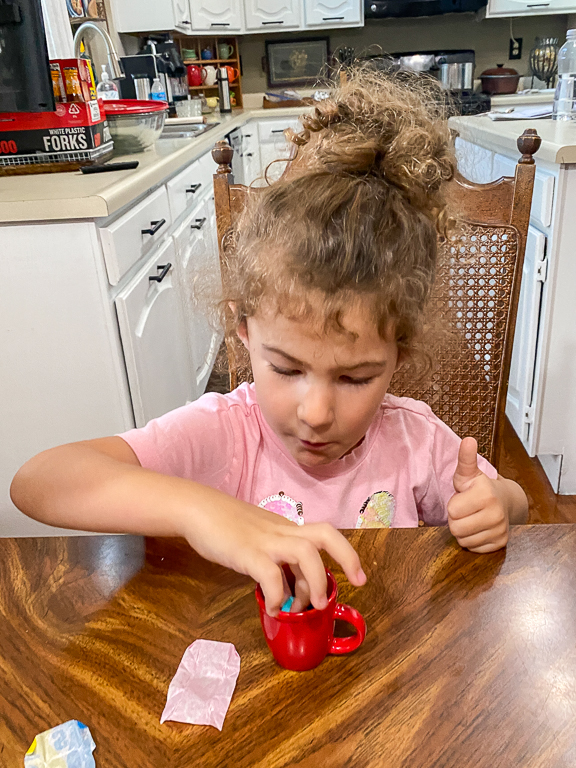 Alright Ian, you get the last pick. Yes, I suppose it is the only pick left, isn't it.
Starburst Cherry. The drink does appear to be the same bright shade of red as the candy. 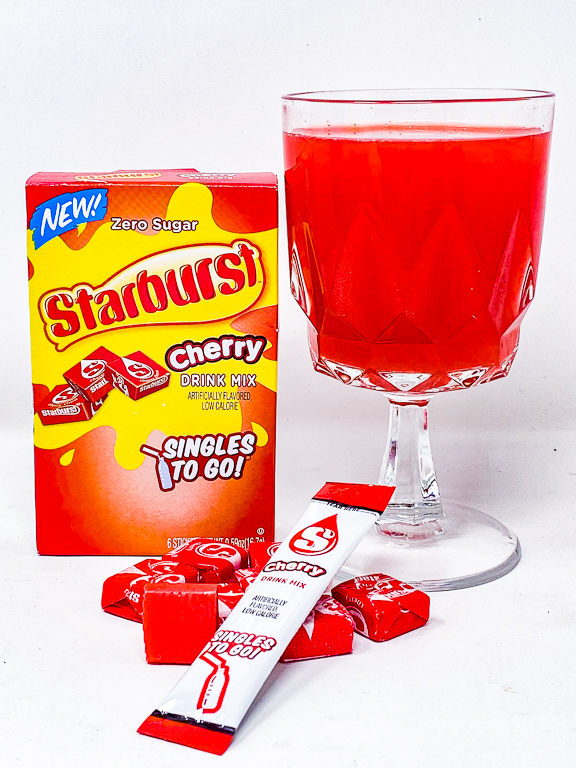 Me serving everyone their drinks. Just a few spoonfuls for everyone to get a taste. 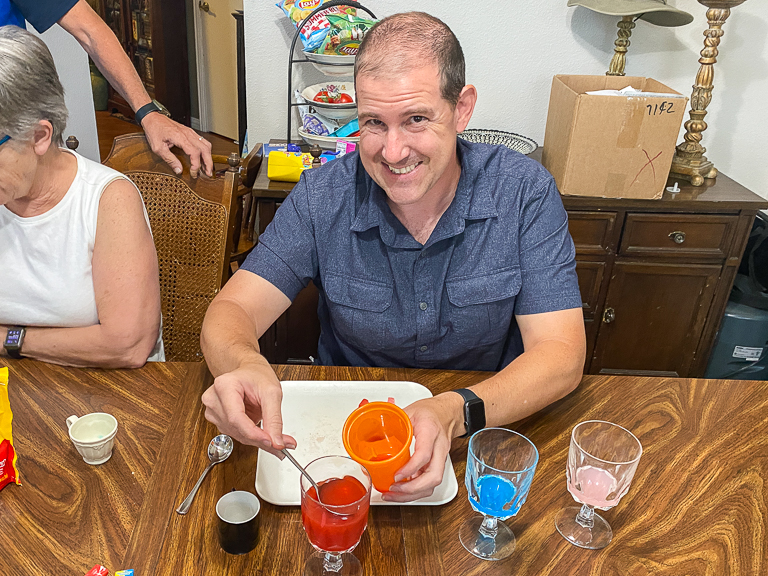 The Cherry Starburst flavor is one of Theresa's least favorites. It's too much like medicine for her. 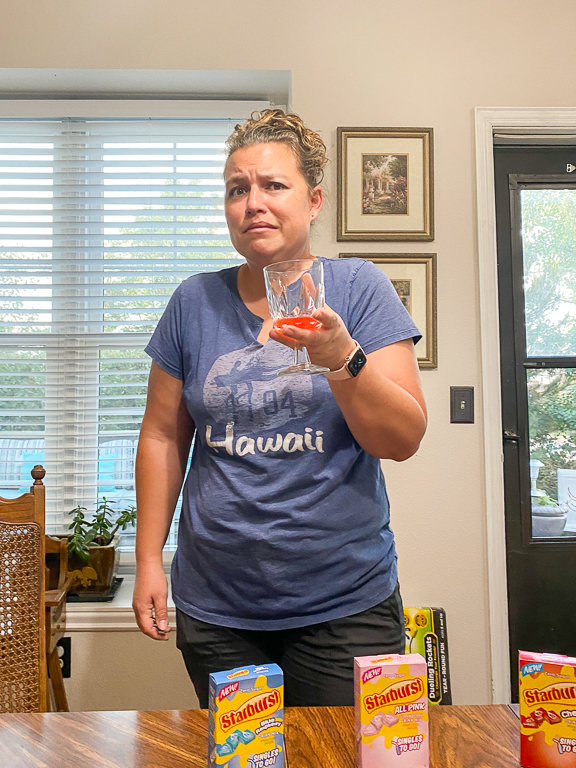 But that's not the same for everyone. Some people loved it.
Favorites:
Drinks
Cherry - Avery, Pop Pop, Ian
Pink Strawberry - Patrick, Gram
Blue Raspberry - Joe, Alli
Theresa says don't waste your money on the drinks.
Starburst Chew
Pink - Avery, Joe, Ian, Alli, Theresa
Cherry - Pop Pop, Patrick
Blue Raspberry - Gram
So the winner for the Starburst Drink Mix is Cherry with 3 votes over 2 for everything else. People agreed that it tastes the most like the candy it's representing.
And there's a reason why they sell bags of just Pink Strawberry. It's the favorite of many.
Big thumbs up for this taste test! 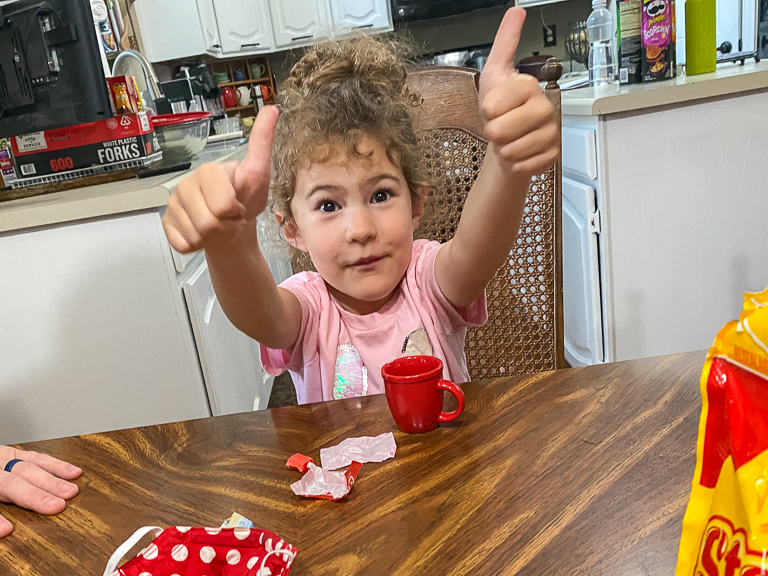