Philly Cheesesteak was on my list of foods to "Make at Home", making the buns, and everything, but I never did get to it. That's okay! I'll just make a pizza out of it instead! 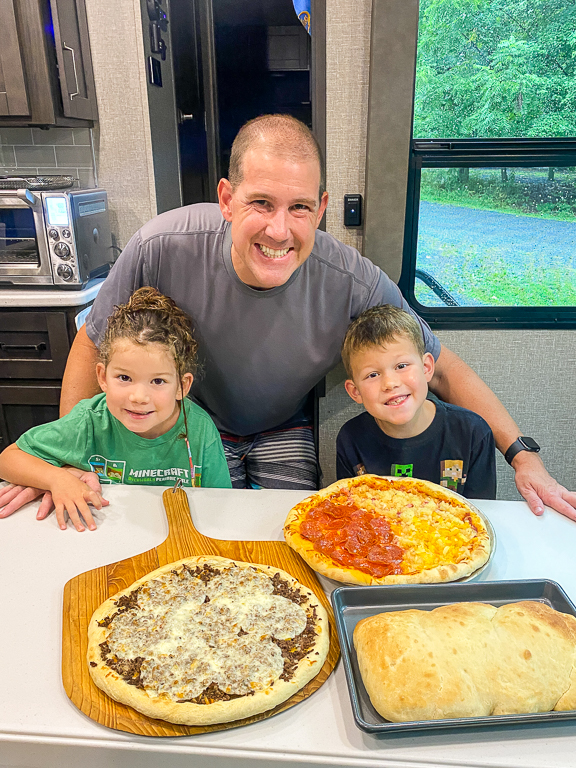 My dough recipe hasn't changed in months now. It's my favorite to make. And I've found that the middle of the truck is the best for letting the dough proof. 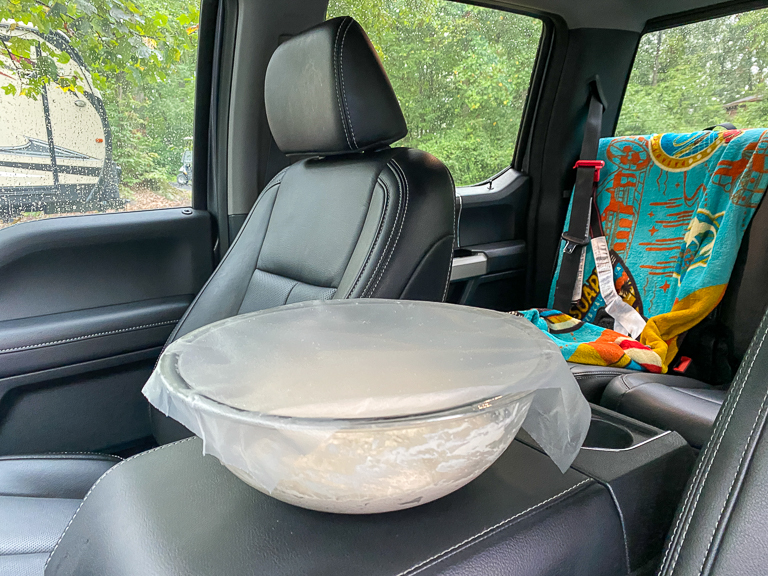 If we're making cheesesteak, I'm going to need some steak. The standard is ribeye, but I'm going to be cutting these so small it's not going to be recognizable. Sirloin will work just fine. These went to the freezer for a little while so they'll be easier to slice. 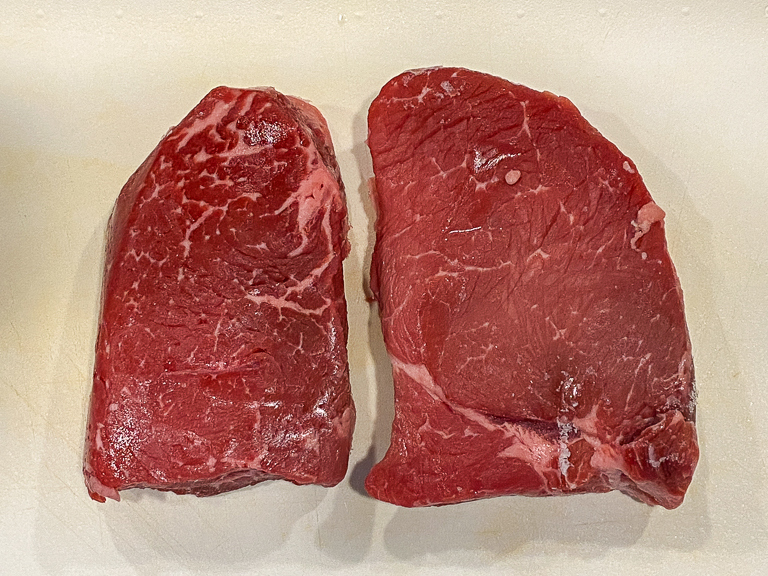 Slightly frozen, with a sharp knife I was able to slice thin pieces and then dice it even finer. 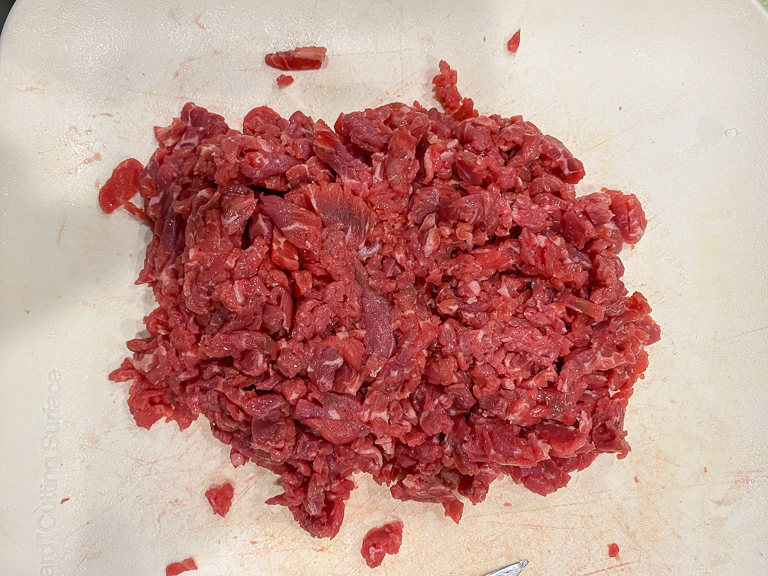 I melted a few pats of butter in a pan, then added some onions and 2 kinds of bell peppers. I cooked everything on low for 10-15 minutes. Theresa came in and noticed the small of onions and peppers right away. Almost smells like fajita night doesn't it. 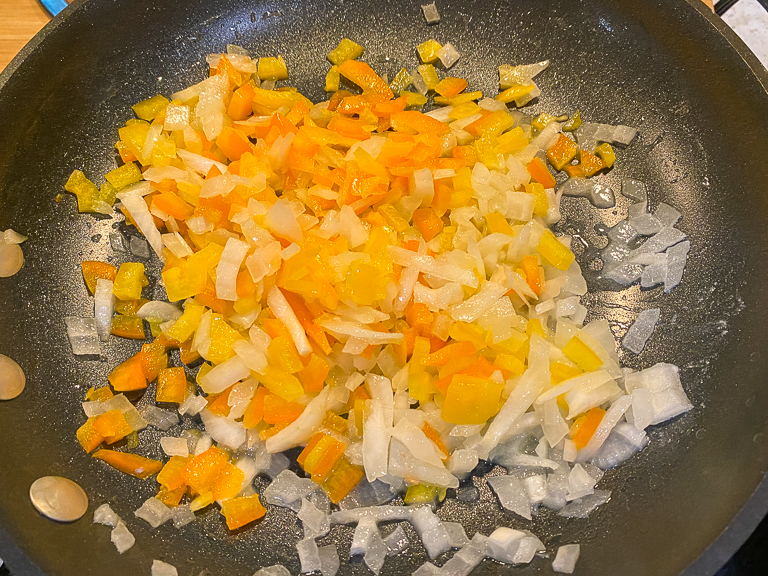 I added a few more pats of butter to my pan and cooked up my small pieces of steak. Seasoned with salt, pepper, MSG, and Worcestershire, this is tasting good. 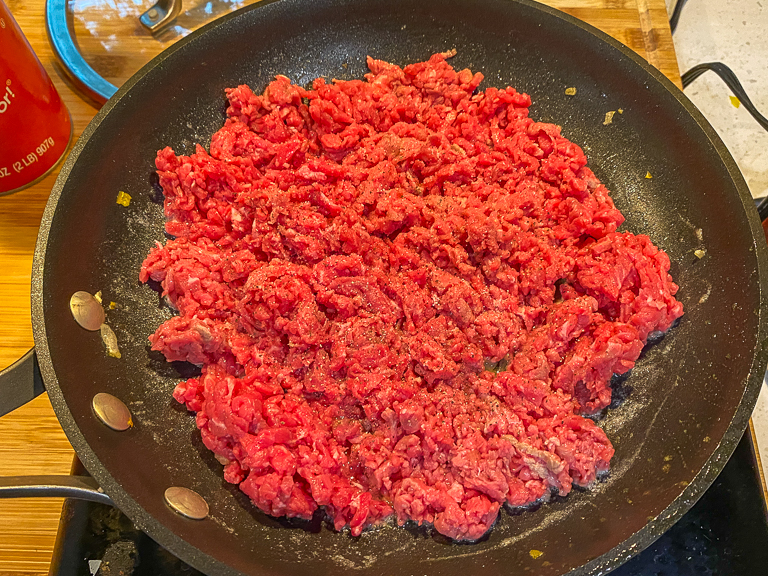 I then combined the steak, peppers, and onions and let them cook together just a little longer. 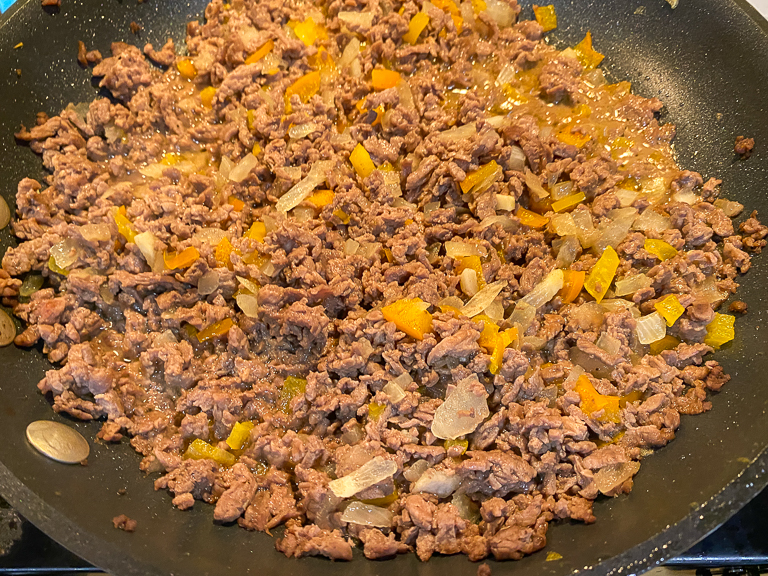 Let's make this pizza! I spread my dough, oiled the crust, and put down a small layer of mozzarella cheese. No tomato sauce on this one. Then my meat layer goes down. 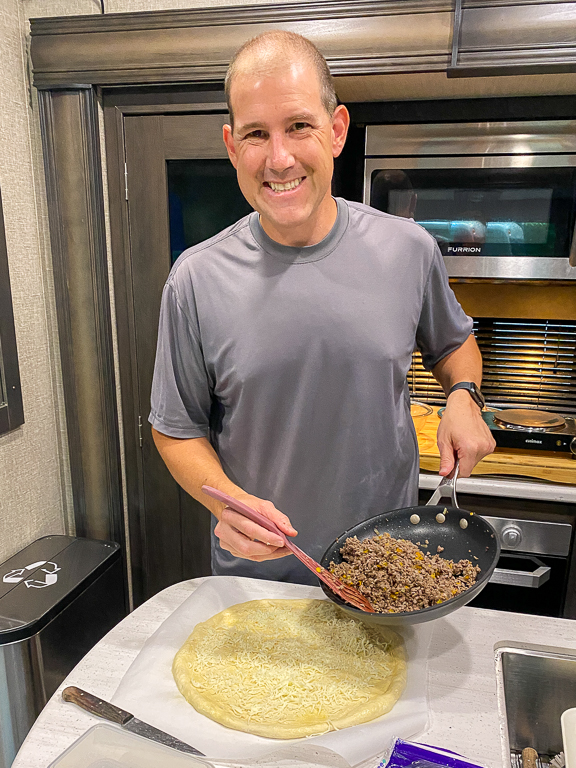 No one will suggest this doesn't have enough meat. I baked it like this for the first 8 minutes. 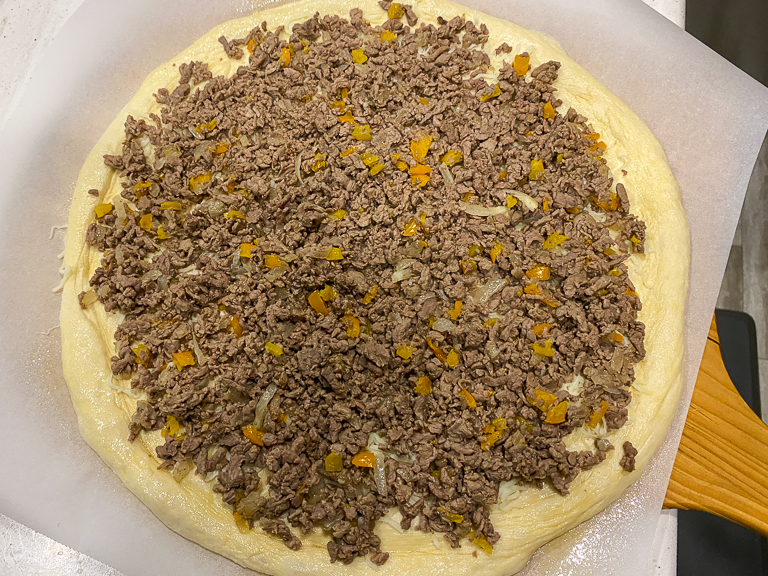 Then with just a few minutes to go, I've got to add the cheese that's going to make it a cheesesteak pizza. I pulled out my pizza and added a few slices of provolone to the top. 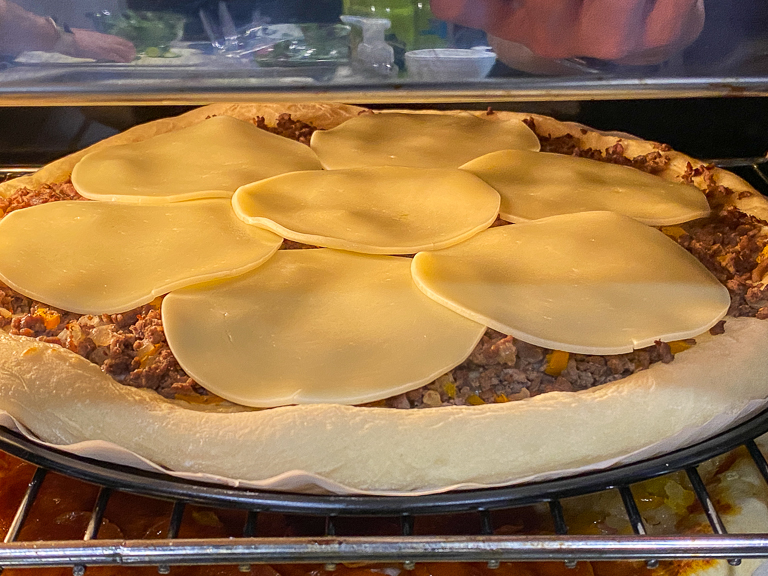 Oh yes. Melted cheese is delicious. I know that Cheez Whiz is another option, but Provolone tastes better to me and it's also traditional. 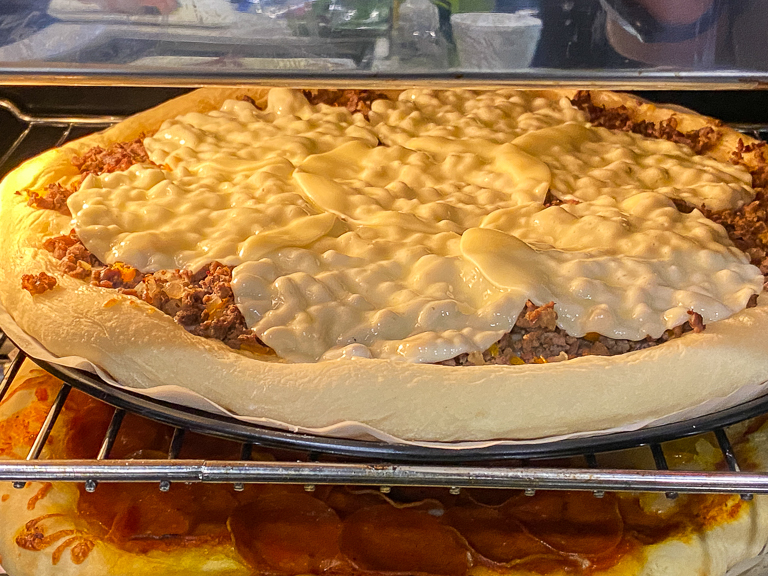 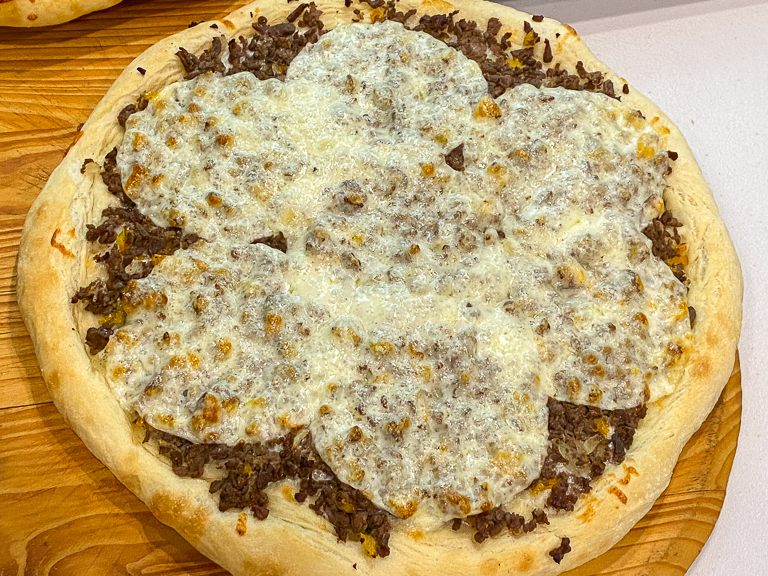 For my second pizza, I'm making a little something for everyone. We've got visitors and Richard loves peppers, onions, ham, and pineapple. He'll get a third of this pizza. Ian love pepperoni and he'll get another third. Then it's ham, pineapple, and red pepper flakes for me. 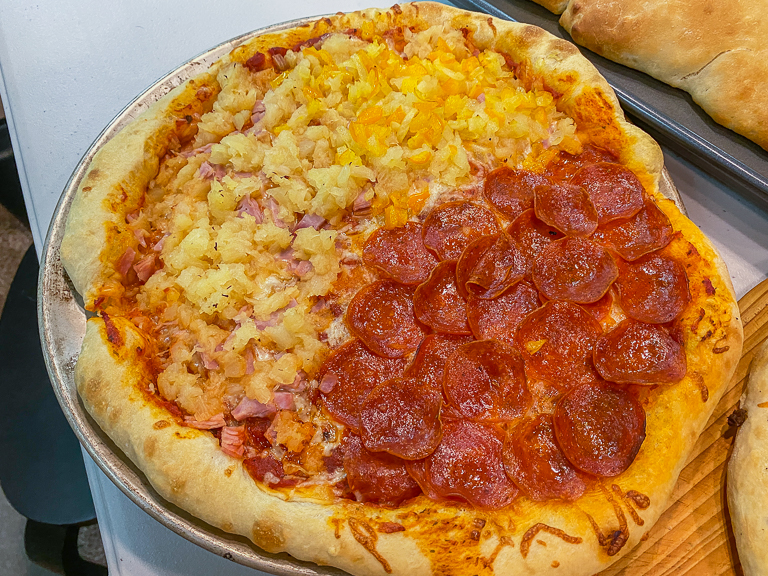 Let's get a shot of that pull-apart of the slices. Oh yeah, it's cheesy. 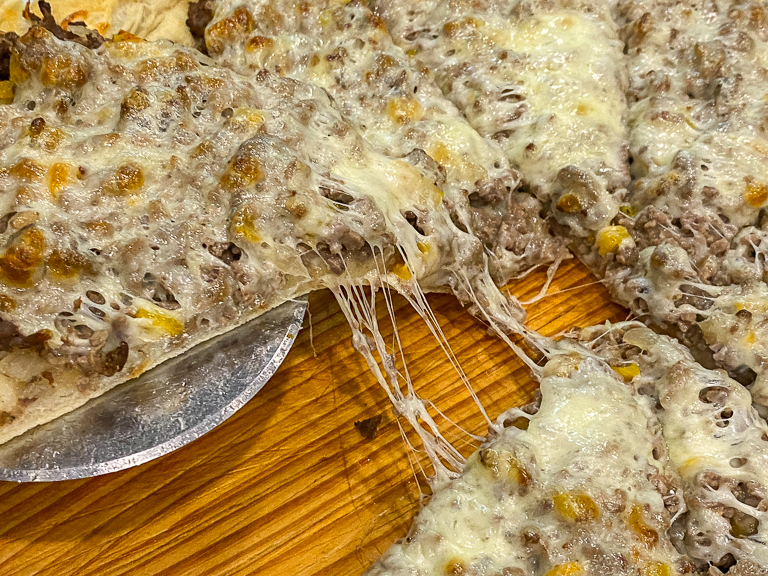 My first plate tonight. The breadsticks are getting pretty popular. Alli and Theresa like to dip them in my pizza sauce or honey. When you dip it in honey it's almost like those delicious sopapillas we made before. Almost. 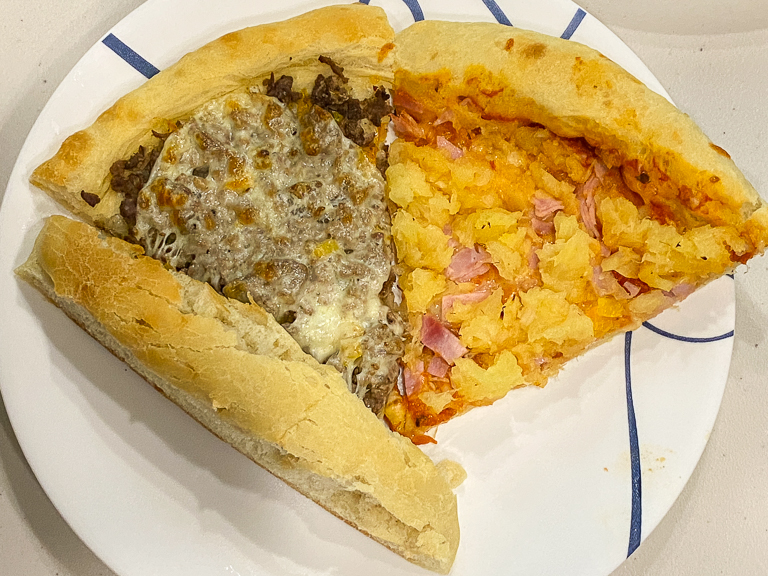 What do the kids think? Thumbs up? I'll take it. 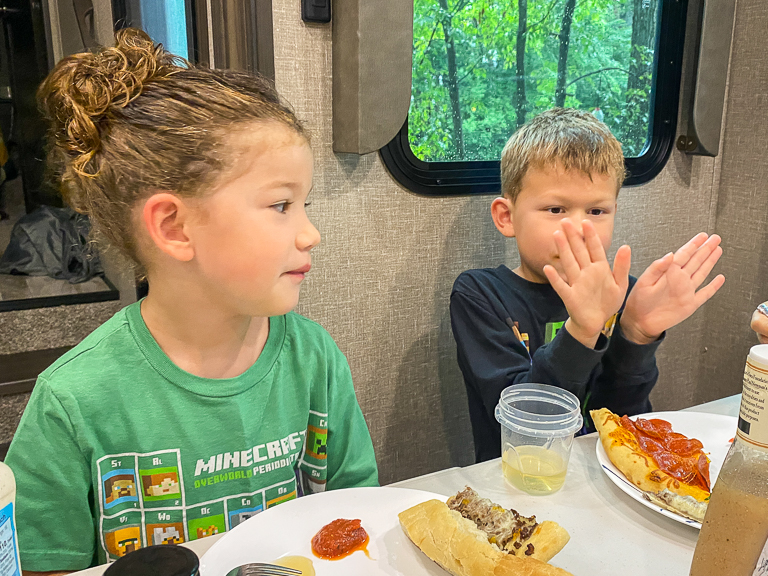 Theresa said that it's her favorite State pizza I've made so far and I'm going to agree. This one is delicious!
Thus far I've made:
Missouri - Wild Blackberry Pizza
Kentucky - Kentucky Fried Chicken Pizza
Tennessee - Nashville Hot Chicken Pizza
North Carolina - North Carolina BBQ Pizza
Virginia - Virginia Ham and Potato Pizza
Actually she just updated her answer and said it's in the top 3 for any pizza I've made. Her other favorites are the Napa Rose pizzetta and thin crust with mushrooms and olives. 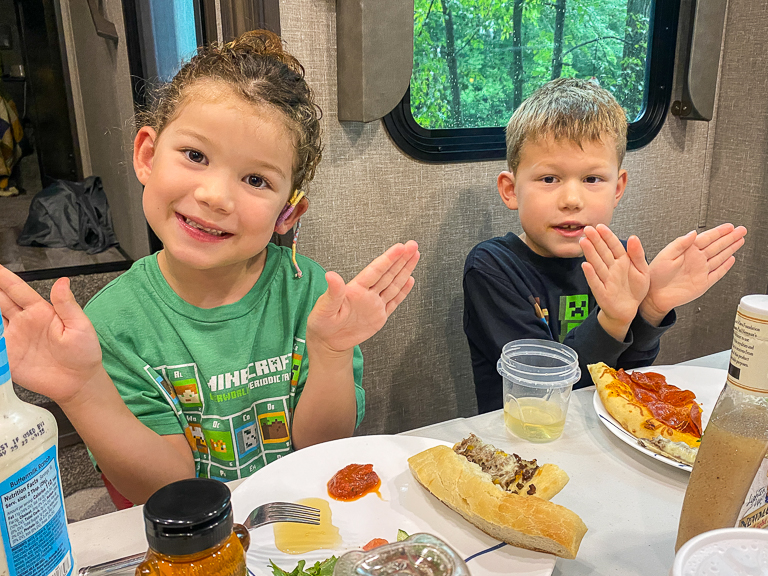