Dunkin' Donuts is making a cereal now? We've got to try it!

Technically the box just says Dunkin'. I guess that's because it's not based on their donuts today, but on their coffee instead. Specifically their Mocha Latte and their Caramel Macchiato. But how will they fare as a cereal? We'll have to taste them and see! 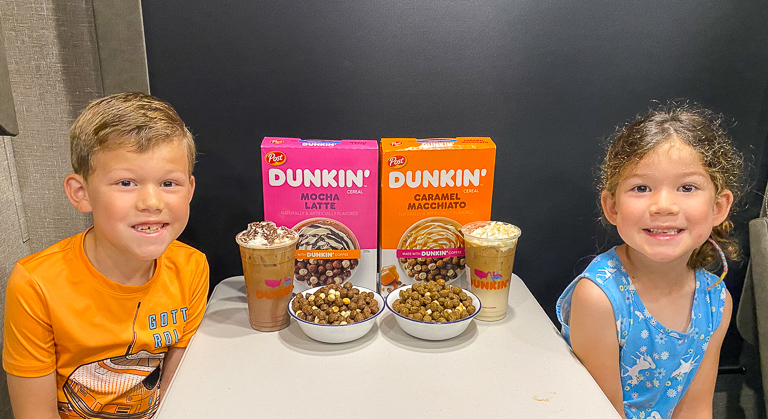 And if we're tasting the cereal, you know we've got to get the real thing to go with it! 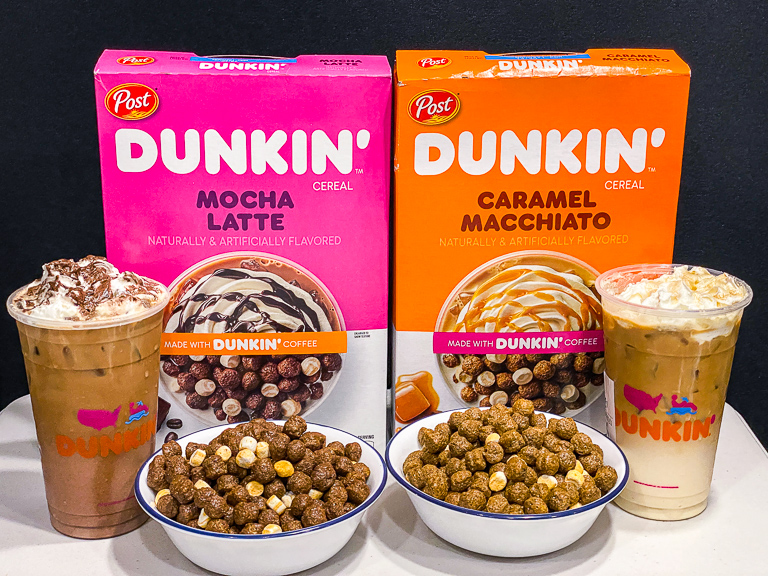 We're in Pigeon Forge Tennessee and there's a Dunkin' Donuts very close to our camp site. 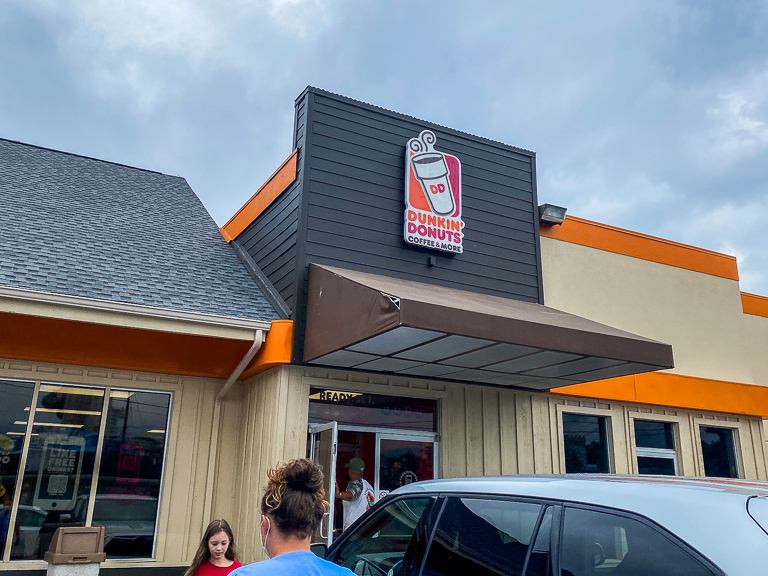 But it's Sunday around 10am so it's pretty busy here I guess. The line is pretty long inside. I'd say there were 8 parties ahead of us. 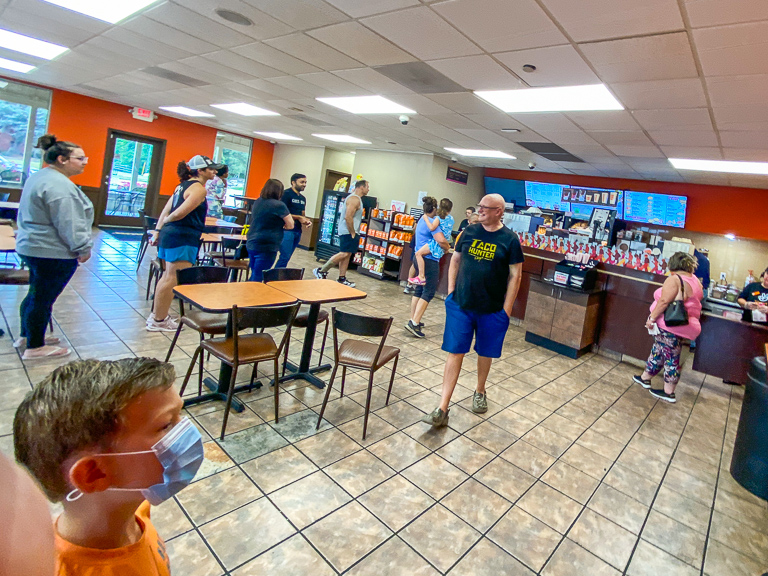 Theresa took the kids to the front counter to show them their donut options, and then went back out to the truck with them. No reason to keep them waiting around with me.
Once I got to the front of the line 25 minutes, yes 25, later, I showed the worker the boxes of cereal with the picture of the drinks on the front, saying I want one of those. 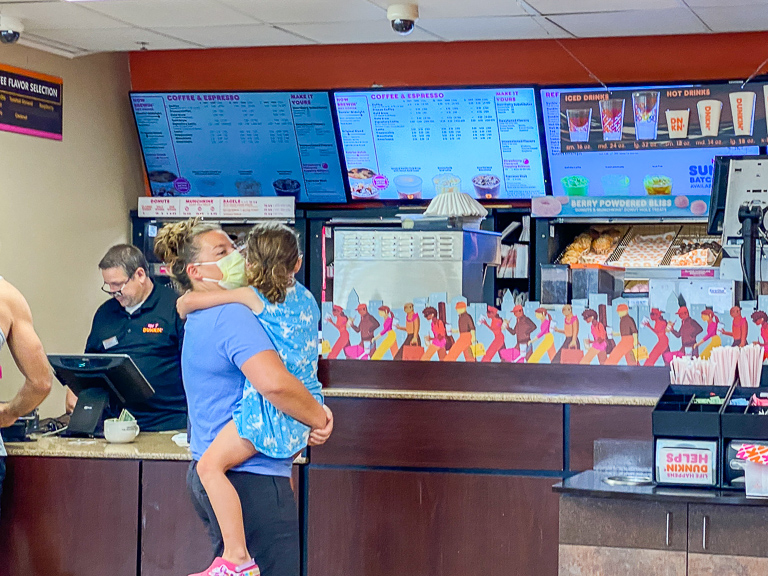 The first one came out with mocha swirls on top. The second one came out without any whipped cream or caramel on top. Of course both had to be fixed so they'll match the picture on the box. 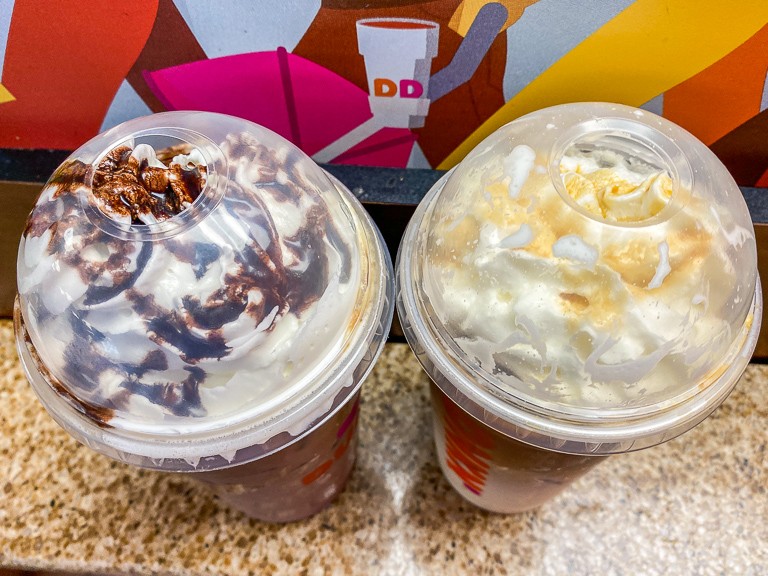 First up is the Dunkin' Cereal Mocha Latte. The box doesn't exactly specify that these are cold coffee drinks. I had to look closely to see the ice cubes floating behind the whipped cream to be able to tell. When I opened the box of cereal I got hit with a coffee smell immediately. That's interesting. I don't think I've had a coffee flavored cereal before. There's marshmallows, perhaps to simulate the whipped cream. The corn puff cereal has a dark brown color, which would be correct for either chocolate or coffee. 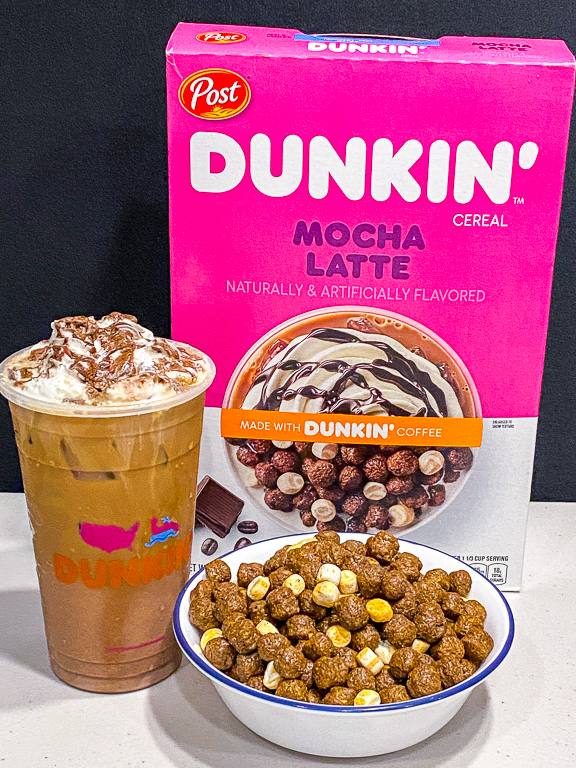 The second cereal is Dunkin' Cereal Caramel Macchiato. This one has a lighter coffee smell. Instead it smells more strongly like sweet caramel. The marshmallows are identical between the two cereals from what I could tell. 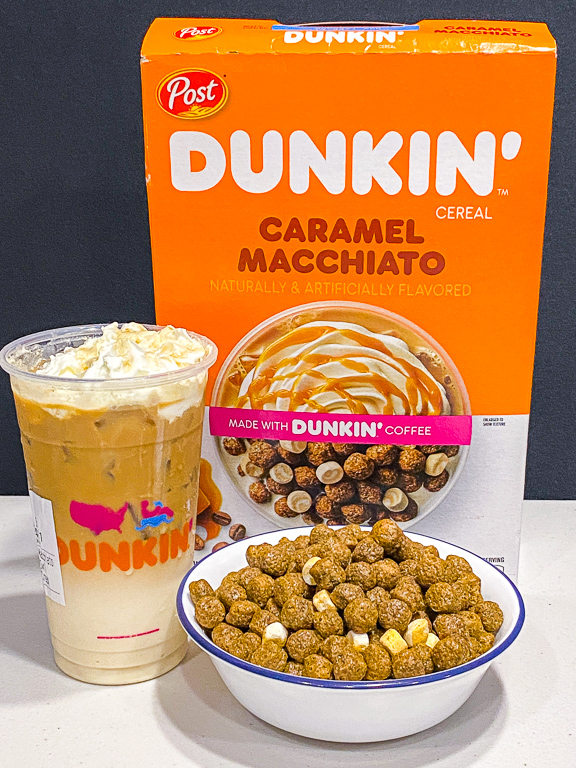 The Mocha puffs have a darker brown color compared to the Caramel puffs. 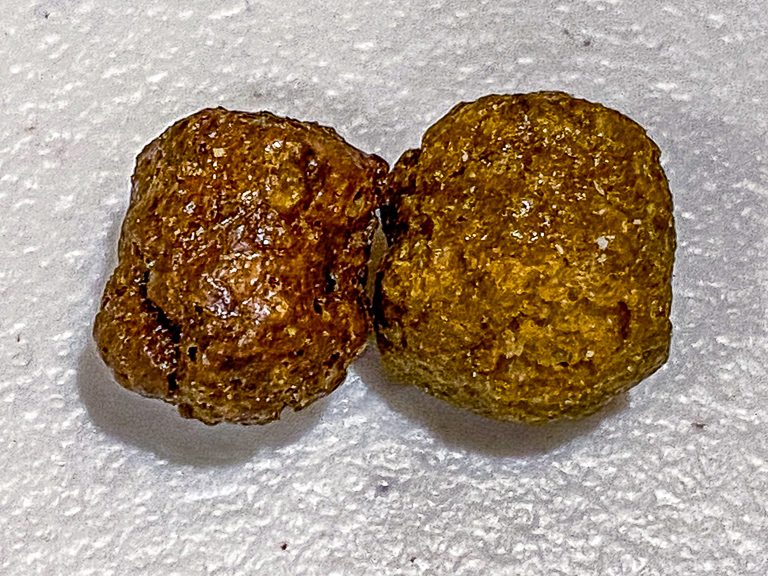 There's no games on the back of these cereal boxes. I guess they figure it would be adults eating the cereal and not kids. Looking at the Timeline on the right, I see that Dunkin' Donuts changed their name in 2019 to just be Dunkin'. I guess the signage on this store didn't get the memo. 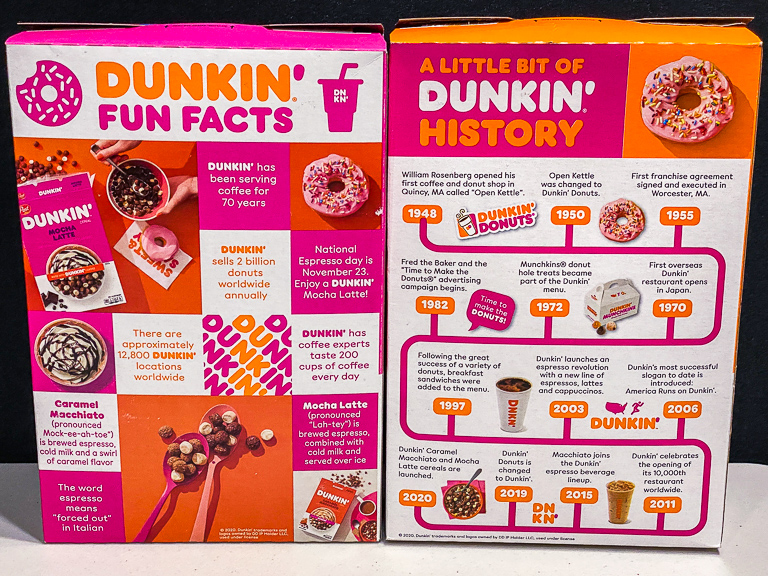 And we couldn't go to a place like Dunkin' Donuts and not get donuts too. The kids got to pick their favorite, plus I got a sampling of Munchkins. I remember loving Munchkins when I was little. 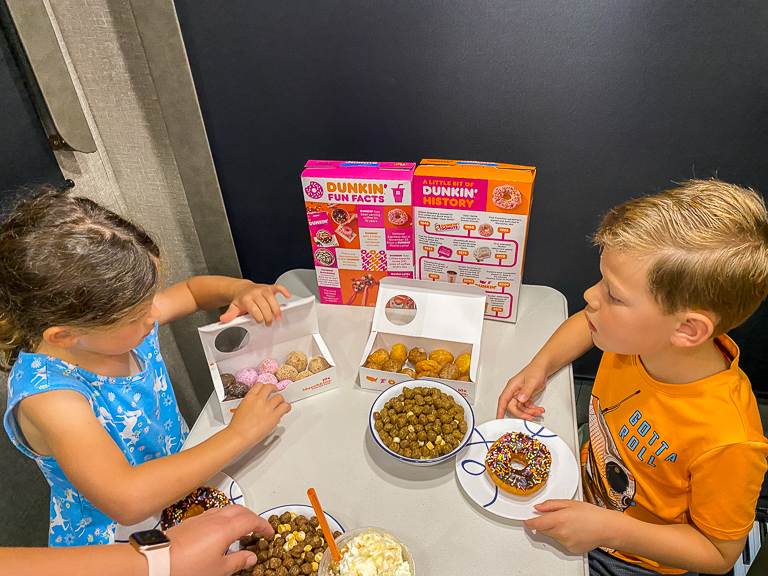 So how are those coffee drinks? 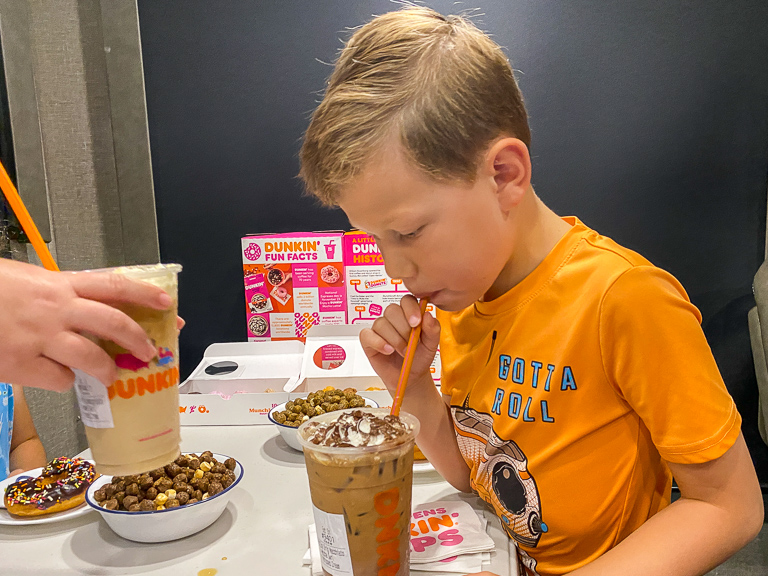 Yeah, you said it Alli. The Mocha Latte drink just tastes like black coffee. It's not particularly sweet at all. 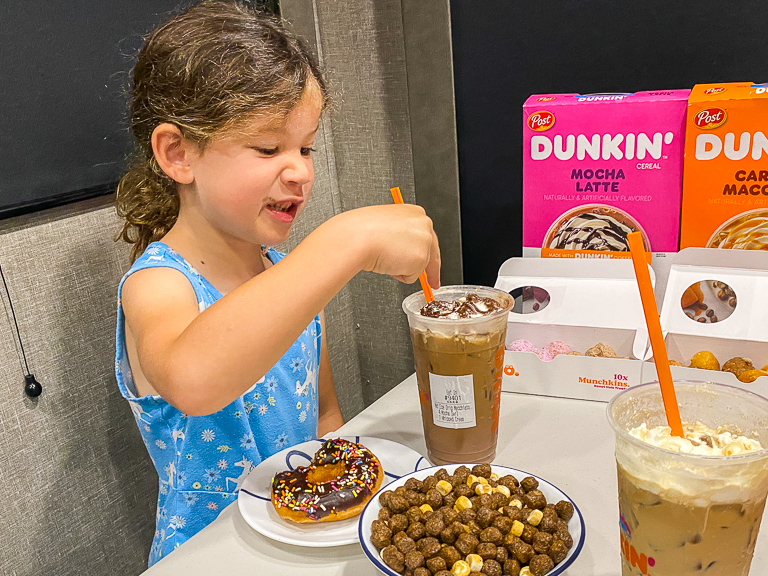 The Caramel Macchiato drink isn't particularly sweet either. Even though the label on the side says there's supposed to be 3 swirls of caramel in it. 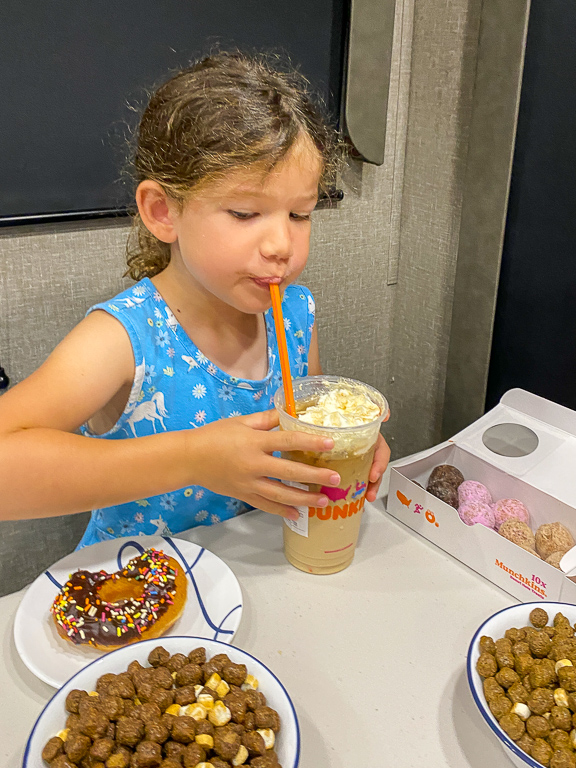 Someone is liking his chocolate sprinkle donut though. 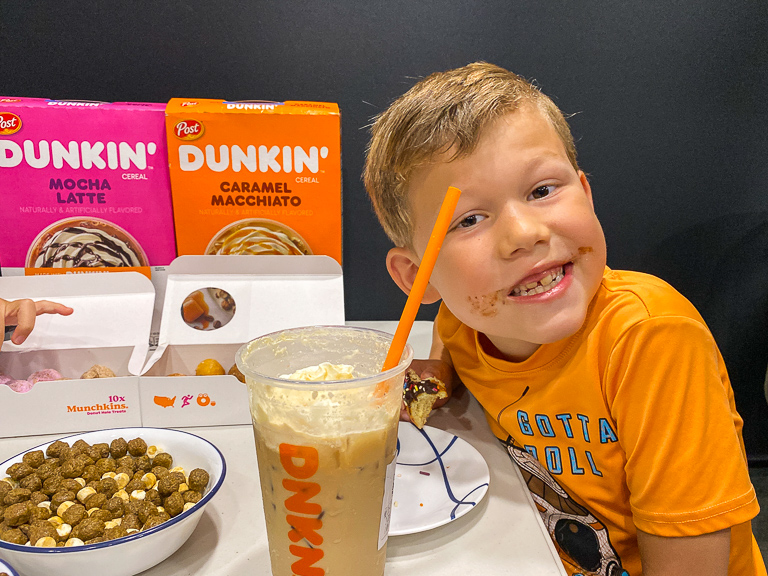 So what about the cereal?
Mocha Latte - Hmm, even though the second ingredient is sugar, it's a little bitter. T says it just tastes wrong. I suppose it does match the drink then, doesn't it. Theresa said "I definitely don't like it."
Caramel Macchiato - Oh wow, this one is unexpected. It actually tastes like a good caramel flavor. Normally fake caramel has a bit of a "burnt" taste to it. This one doesn't have that. I doesn't taste like the drink. It tastes better than the drink. Theresa said "If I had a coffee flavored cereal, that's what I'd want it to taste like. Though I don't necessarily want a coffee flavored cereal."
Ian - Neither of the drinks or the cereals satisfies me. 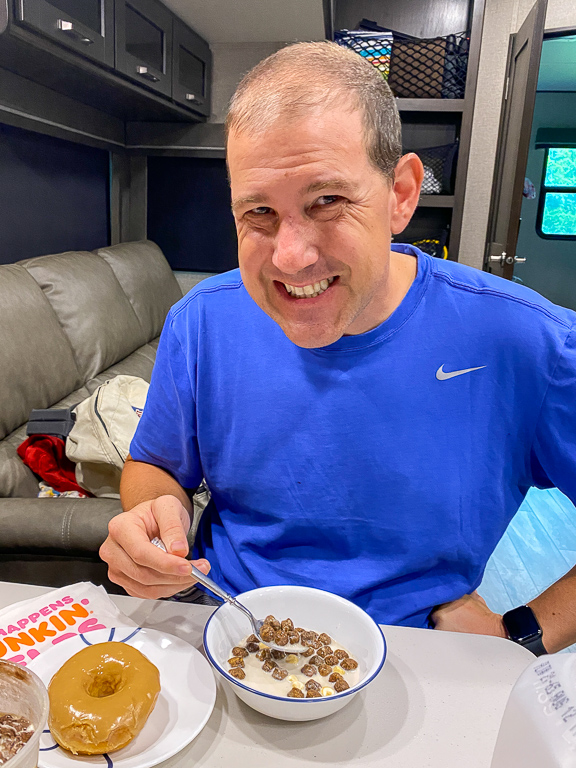 I got a half dozen donuts, including a chocolate sprinkle, vanilla sprinkle, and strawberry sprinkle. 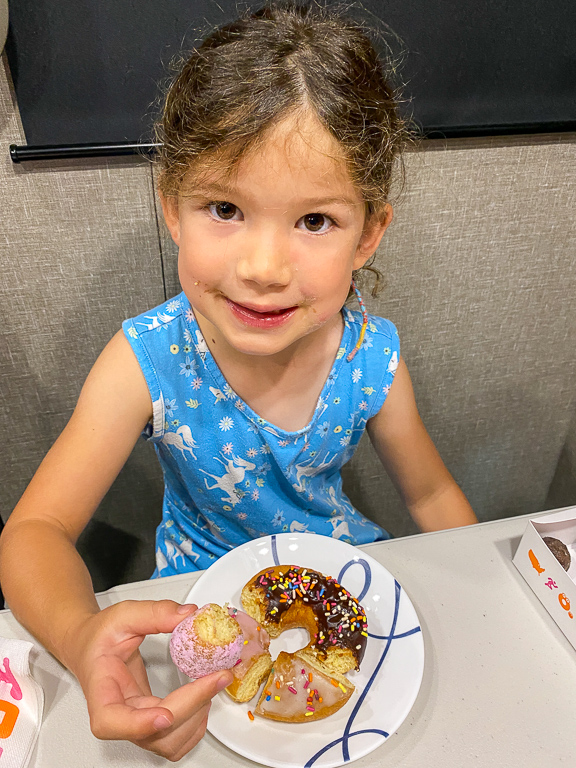 Alli has a Neapolitan collection on her plate right now.
Theresa said "You can remind me that I don't need to buy Dunkin' Donuts anymore. There's lots of other better donuts out there." She's been spoiled on Randy's Donuts and Moon Donuts back in Los Angeles. 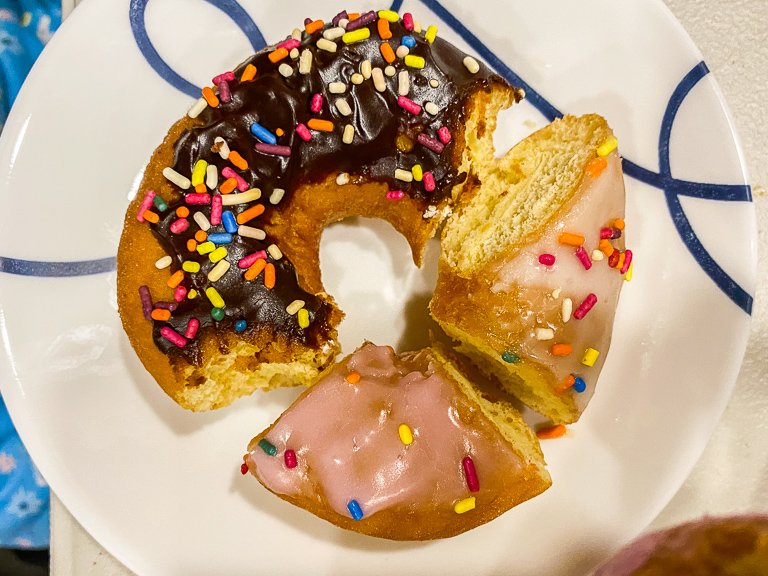 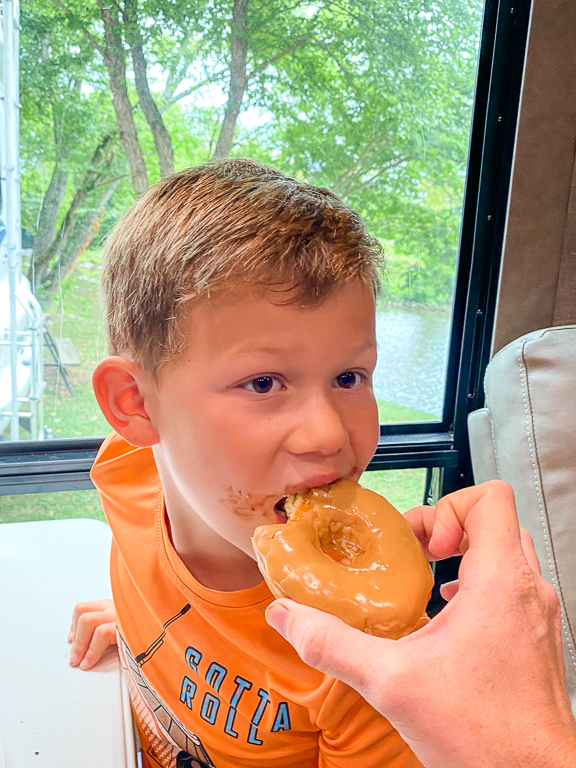 Alli, are you just eating the icing off the tops of your donuts? 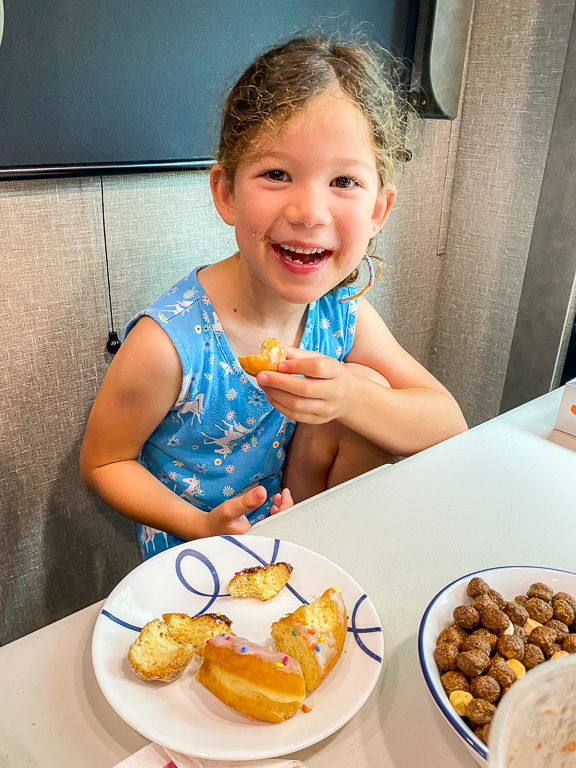