Time for a sleepover! The kids have been excited to have a sleepover for a few weeks now. During the day, they have been taking all the pillows in the house and piling them up in the living room, just on the off-chance that we'll consent to doing a sleepover that night. Finally though it's the weekend and we're ready. There's lots of fun stuff we've got planned for our sleepover.

Fun things like a pizza party dinner! You can make any frozen pizza a whole lot better by adding your own toppings to it. The kids love extra pineapple and I like adding goat cheese. Yum! And the drinks are special too. Chocolate milk for them.
And we all watched a movie together while eating dinner. The musical Sing hits a lot of the right notes. 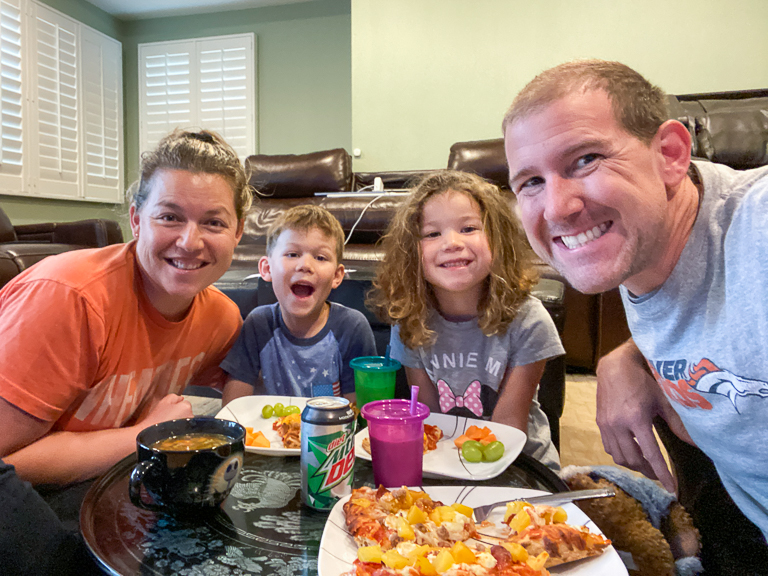 And all good sleepover need dessert. We grabbed some of Aunt Rita's frozen cookies and made ourselves a batch. 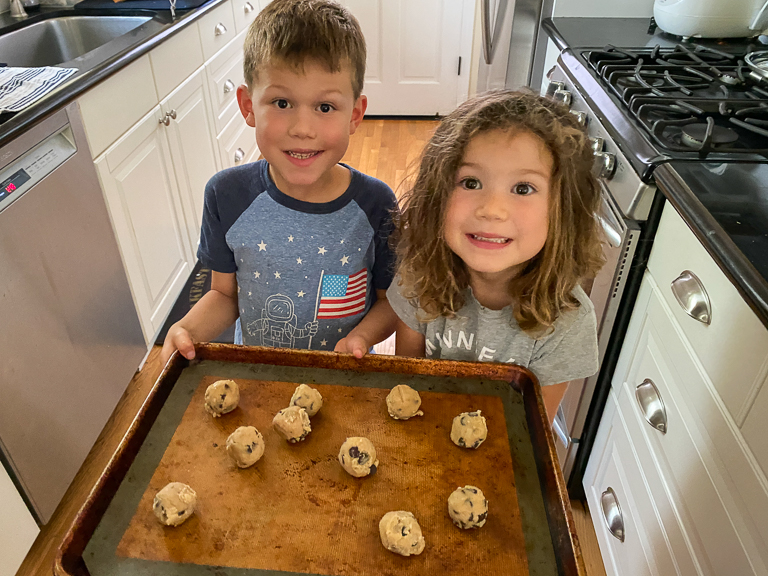 Which will go great with ice cream. The girls wanted ice cream cones, the boys were happy to have ice cream in a bowl and eat the cookies separately. 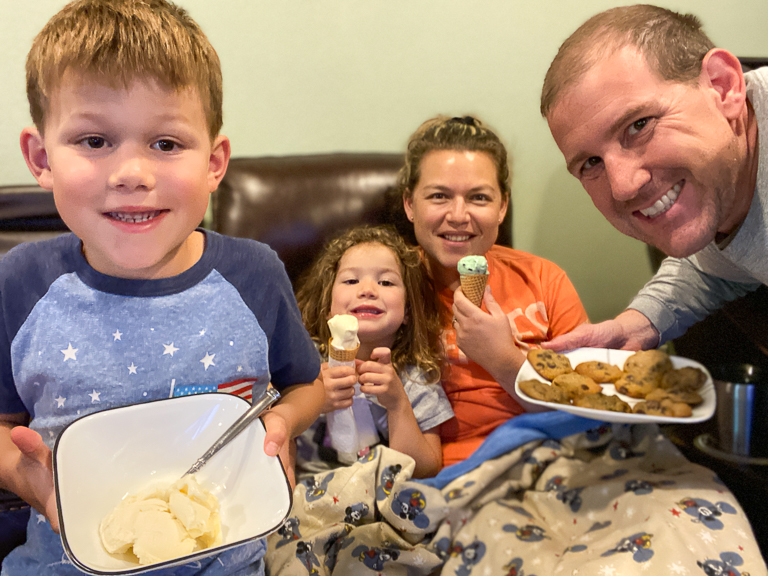 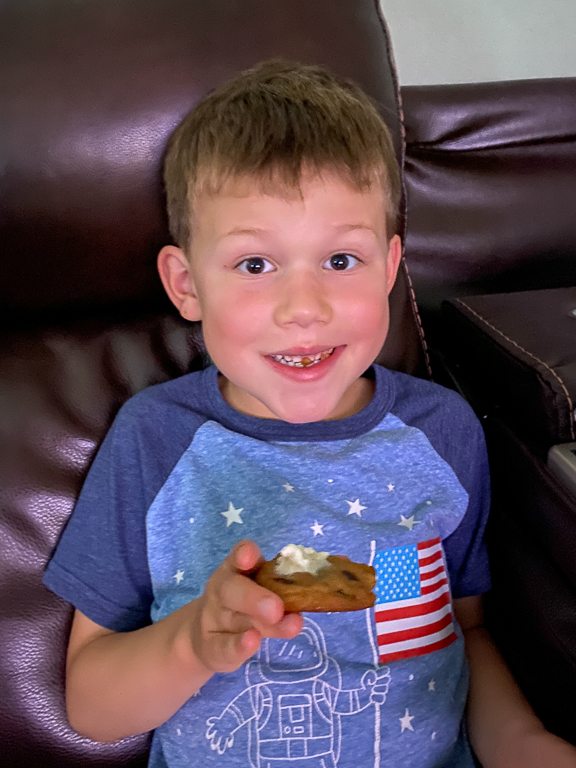 Going through our usual nighttime routine, the kids brought their books out to the living room. Alli is doing pretty well, working on getting through her second BOB book. Not bad for a 4 year old who isn't even in kindergarten! 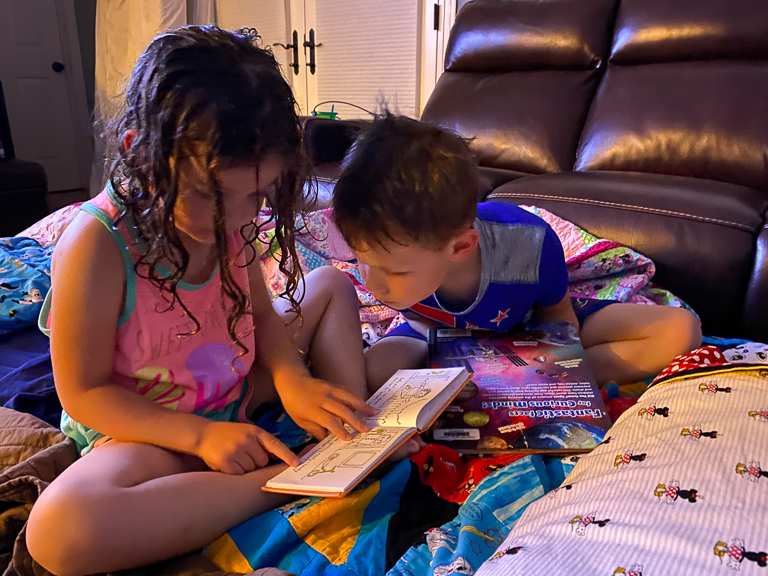 Our mattresses set up in the living room, ready to continue our night. 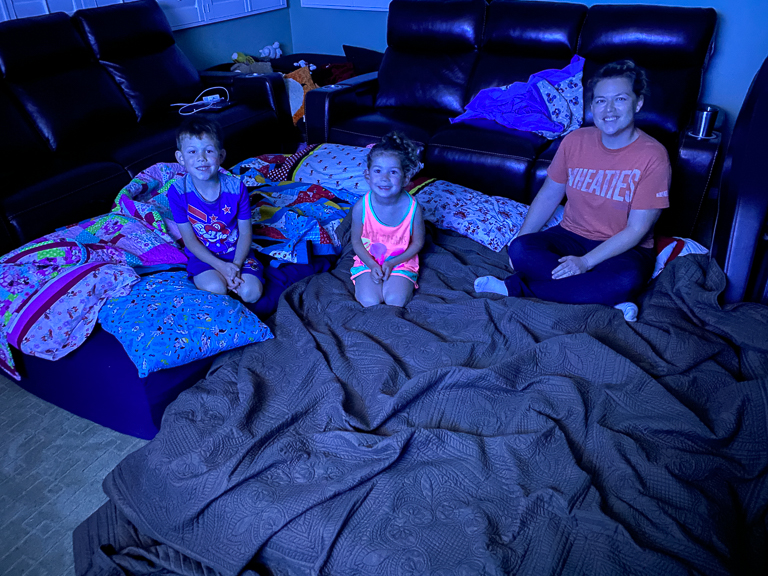 Instead of going straight to bed, we're going to watch a movie. The first Trolls movie from 2016 is also a fun musical. We rented it from Amazon and the kids were loving it. 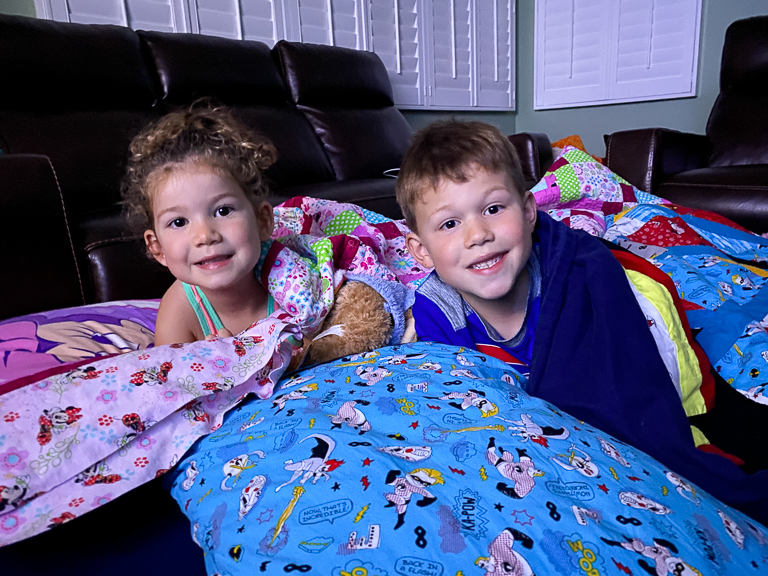 Finally at about 10pm, Ian said that he was ready to go to sleep. Alli concurred. The TV went off, but everyone was still a little excited about having a sleepover. You know what else is good to do during a sleepover?
Telling stories! Everyone made up whatever story they wanted.

Alli came up with a story about everyone getting to eat fruit salad.
Ian's story was about going to the store and finding dollar coins on the ground, then going to eat and finding quarters on the ground, then coming home and finding nickels on the ground. finding over 1000 dollars total. That's a fun story!
I remember hearing my dad tell Freddie the Frog stories when I was growing up. Freddie would have all sorts of adventures and I remember imagining all the things he would do in my mind. And so I continued the Freddie the frog stories. Today he went on a trip to Disneyland, pulling the sword out of the stone and being king for the day! I asked the kids for input on what kind of things he got to do. Freddie got to go all sorts of places. Ian said he got to go into the Dream Suite (Ian really wants to go since I read him our story). Space Mountain lots of times without having to get off. Roger Rabbit where Roger joined him in the car and drove him all around. Alli thought Freddie should eat at the Blue Bayou. Once it was time to go home, Freddie got to ride a Monorail home. Sounds like a fun adventure.
Theresa made up a story about a Princess Eva and her friend who lost a red ball in the forest and ended up going on an adventure. They met a fairy, an ogre (Shrek), and candy house with lots of treats (no witch), and finally found their red ball.
In the end, it was after 10:30 before everyone really started going to sleep. 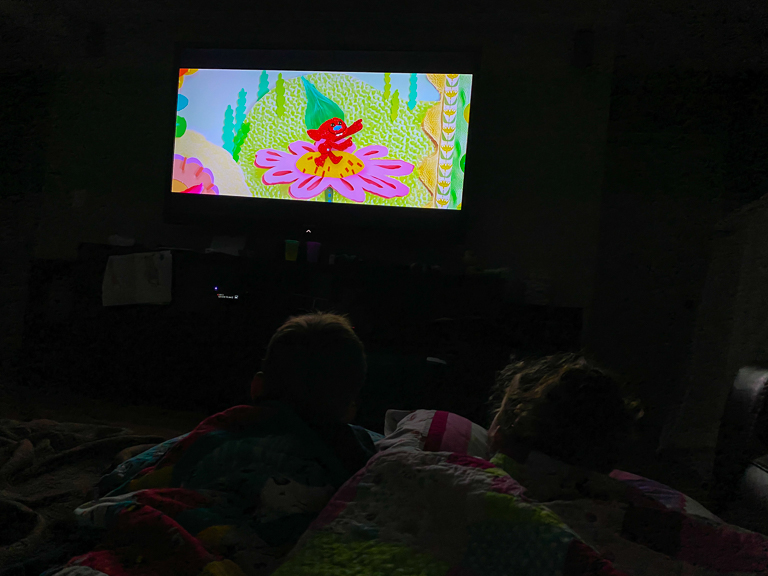 The kids woke with the sun the next morning. So early... They're bright eyed though. 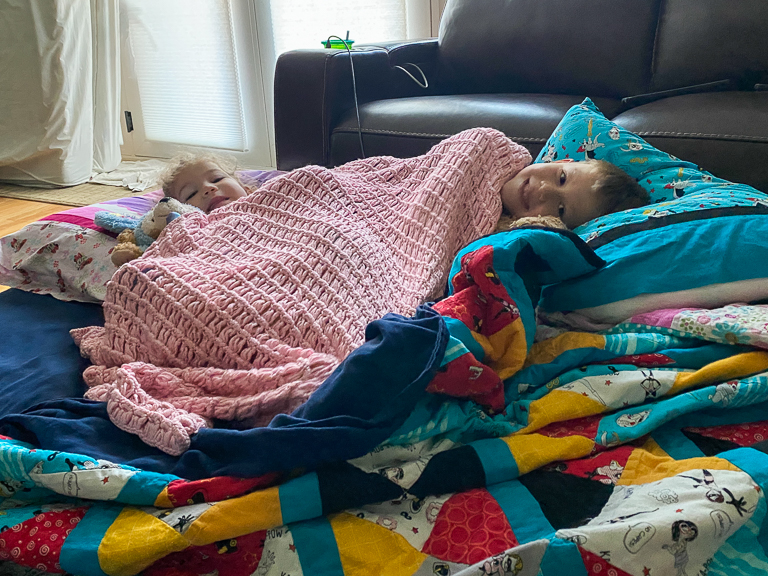 We spent the morning watching fun cartoons, like Rescue Rangers. 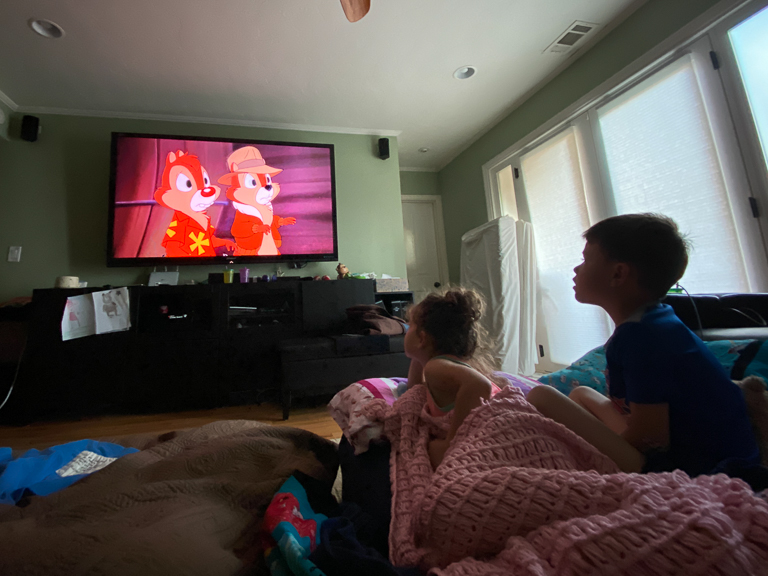 It was a relaxing morning. 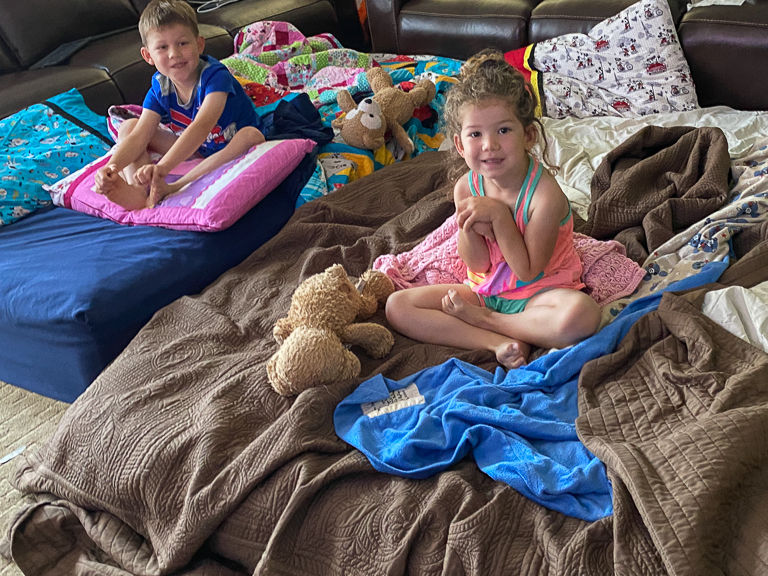 Eventually it got around to wanting to hear more of "Daddy's stories". They saw one of the stories I wrote about going to Six Flags Magic Mountain and loved hearing about all those different roller coasters they could ride when they got bigger. The next best thing are on-ride videos. They wouldn't let me pass up a single one. I told them some of my favorites.
Rides like Tatsu where you lay down in a Superman pose and fly through the ride. Ian assumed the position during the ride through. After every ride he would ask me how tall he needs to be to ride that one. Magic Mountain has a bunch of big thrills, so a lot of them are 54". He's still got a ways to go, 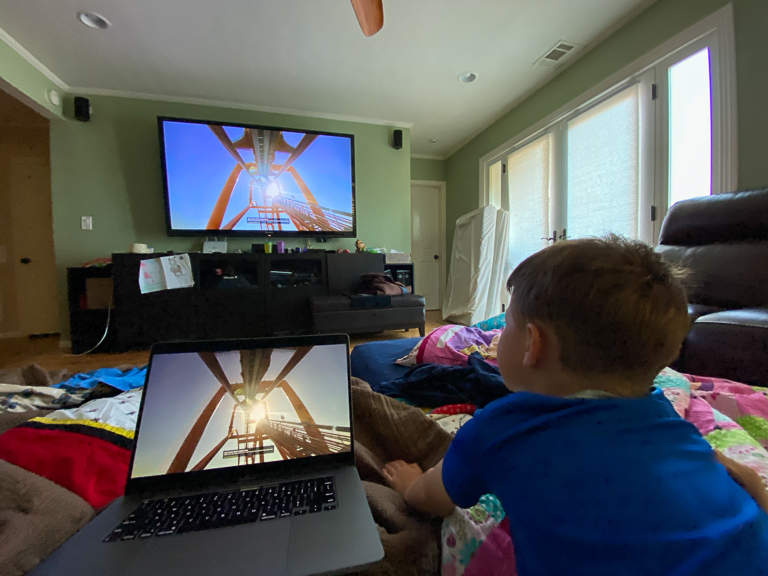 Riddler's Revenge is a stand-up coaster, so he stood and leaned for this ride-though. 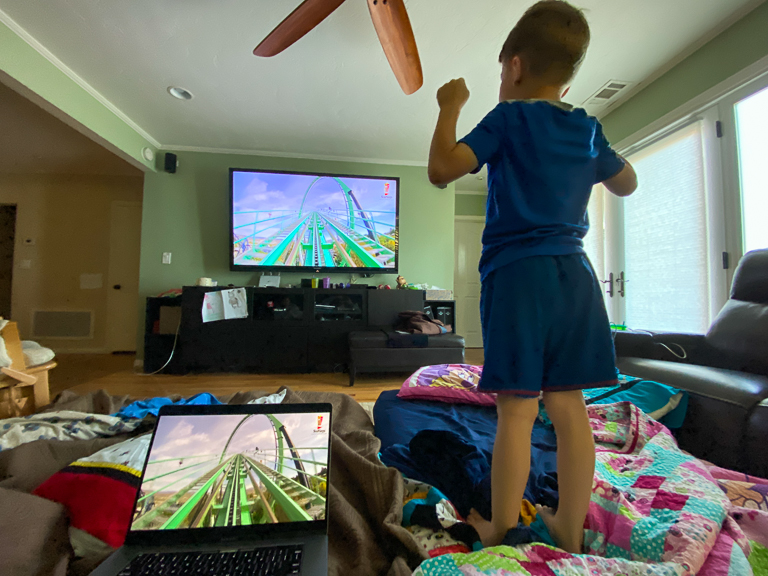 All in all, it was a fun sleepover. They want to do it again soon.
Posted by Joe at 6:00 PM