I've got a fun new series that we're going to be starting. With the stay-at-home order, we're making the best of it. Even though technically it's allowed to go out to get food, we're staying at home and making our own meals. That means for now, we're not doing any fast food.
But, that doesn't mean we can't make our own at home!
Tonight, the new Home of the Whopper is the Flowers' House! 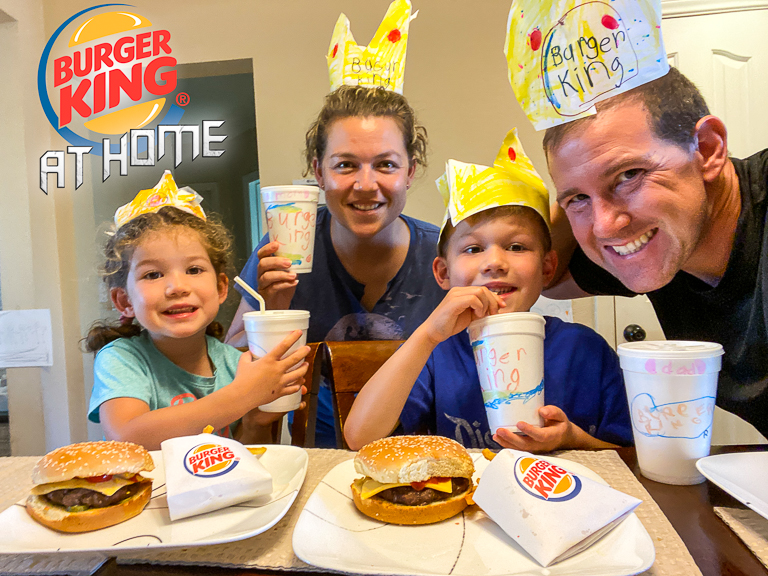 It starts with the hamburgers. Earlier in the day I mixed a pound of 88% ground beef with 1/4 teaspoon of pepper and a 1/2 teaspoon of salt. Afterwards I separated them into 6 patties and squished them about as flat as I dared. After that it was into the freezer to firm up.
You can't call it a Whopper if it's not flame-broiled, so it was out to the grill to cook. 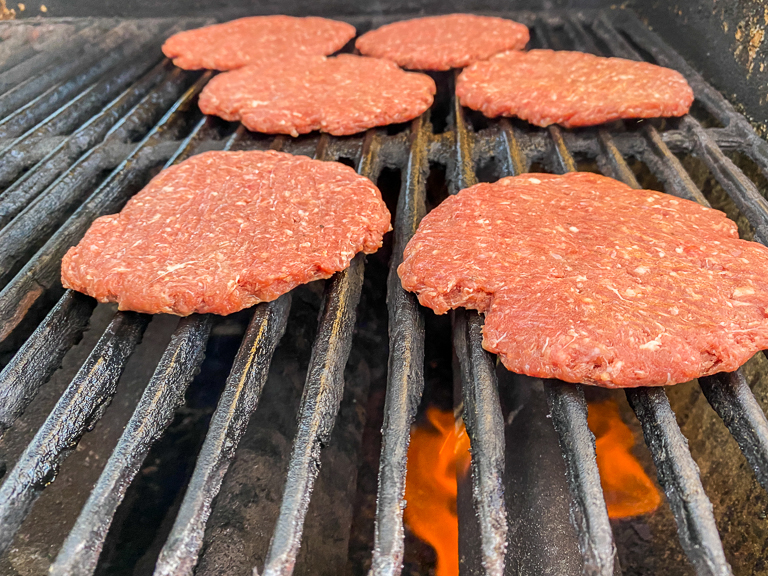 Oh yes, look at those grill marks. These are turning out great. 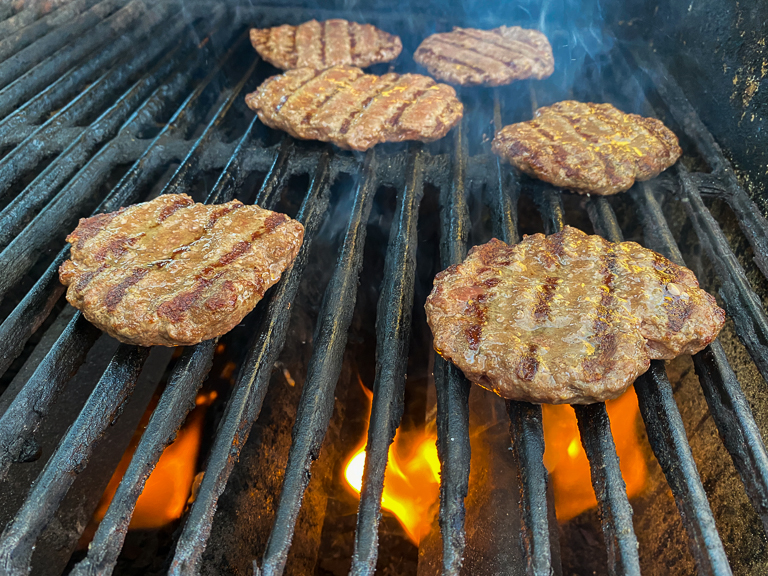 Hey Kids! Let's have dinner!
They can't just go to the table if we're going out for dinner. They have to take a car. 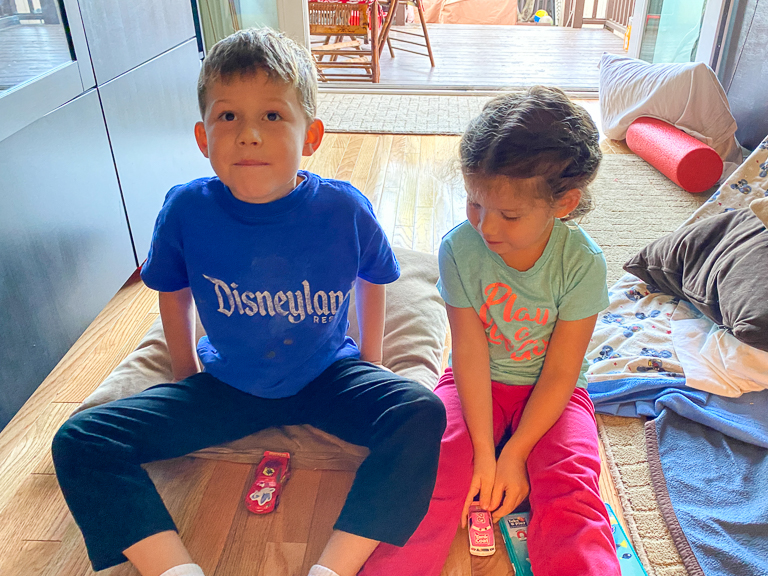 This next part was totally their idea. I'm just glad that I was taking a video. They each had a little car and rode to the table for dinner.

Once they got there, there were Burger King Crowns waiting for them.
I had given them a heads up earlier in the day we'd be making Burger King, so they were pretty excited. They made BK Crowns for everyone! 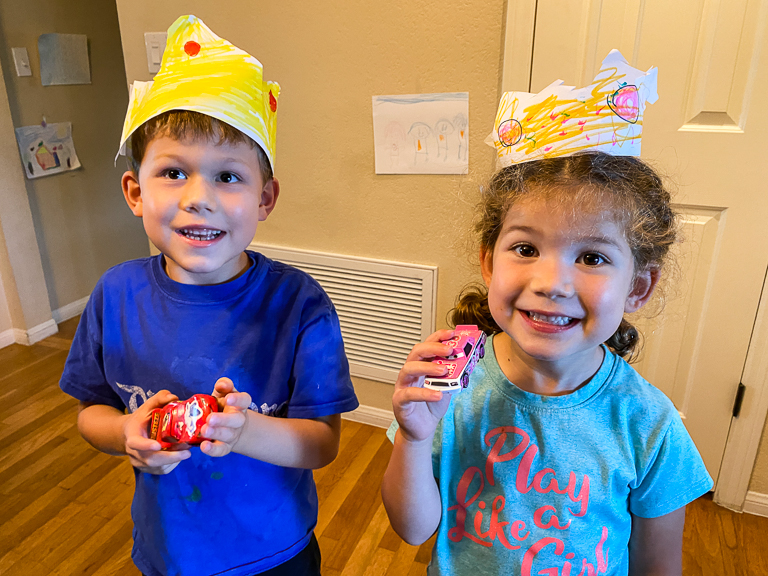 And I had a little touch of creativity of my own too. A wrapper for the burger and containers for the french fries. Speaking of french fries, Theresa had some Ore-Ida Extra Crispy Fast Food Fries in the freezer that worked out perfectly for this. 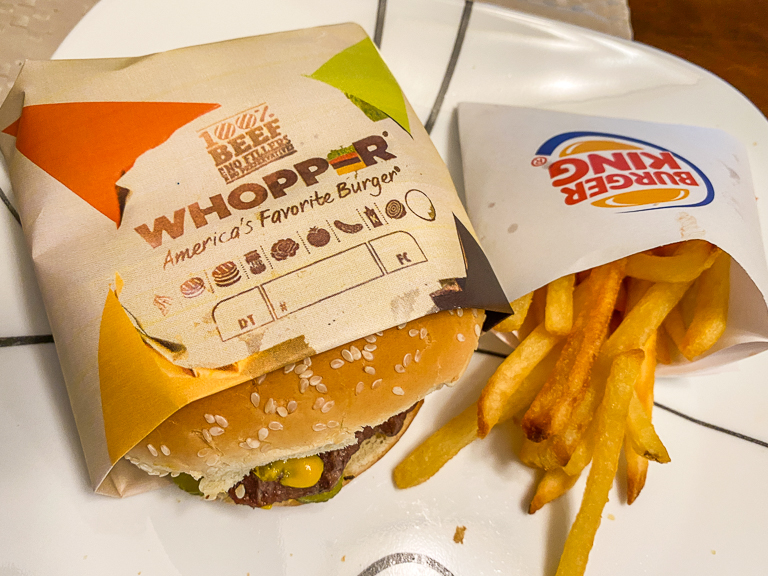 I made sure to use sesame seed buns, buttered and toasted, and had an array of toppings, so everyone could "Have It Your Way". 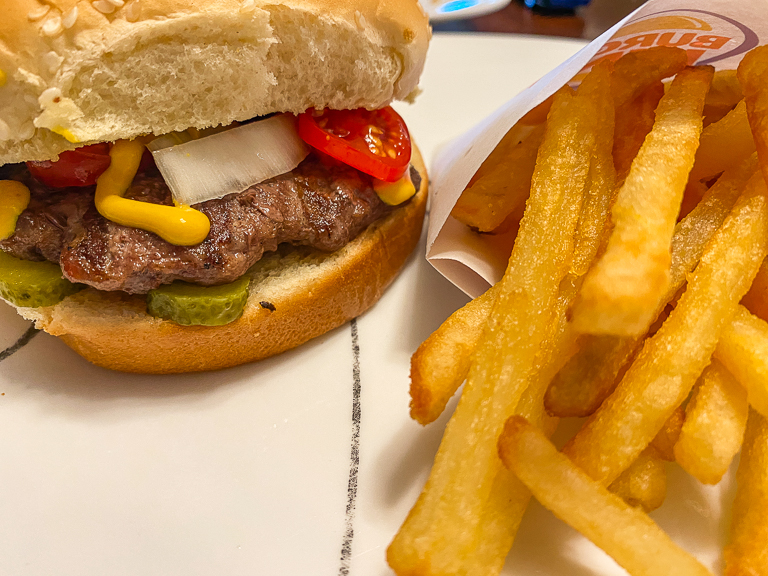 As an added touch, the kids added their version of the Burger King logo on everyone's cup too.
Ian - I even included the ® sign.
I can see that. Nice job.

With their requested burgers made, they were excited to dig in.
Alli had a burger with tomatoes, onions, pickles, cheese, ketchup and mustard. She loves toppings.
Ian wanted cheese, ketchup, and just 1 pickle. That's fine buddy, you can have it your way! 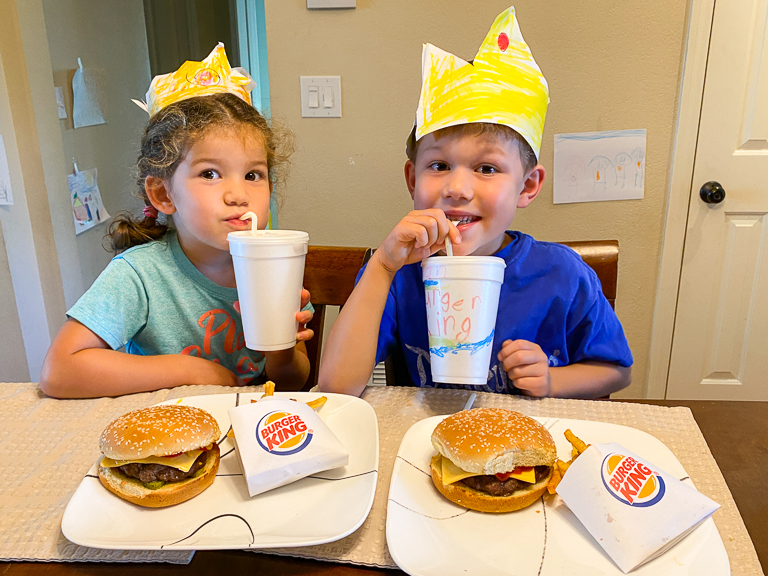 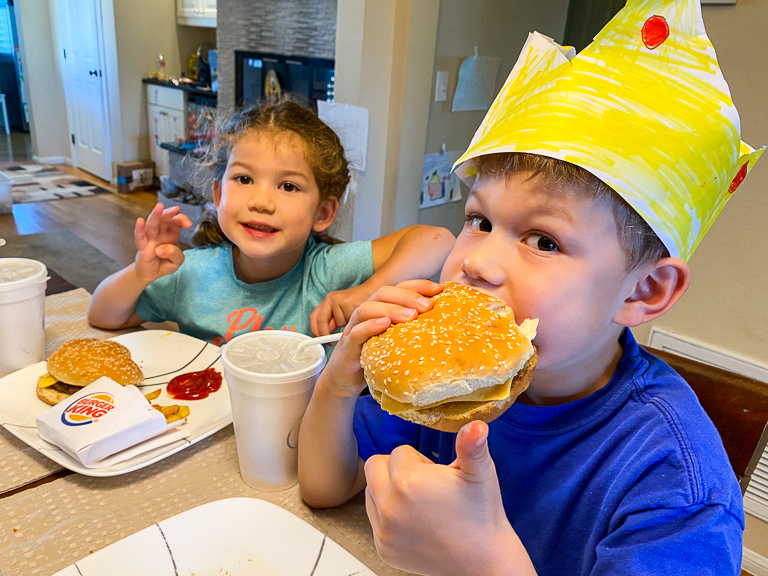 Great job everyone helping to make this meal special! 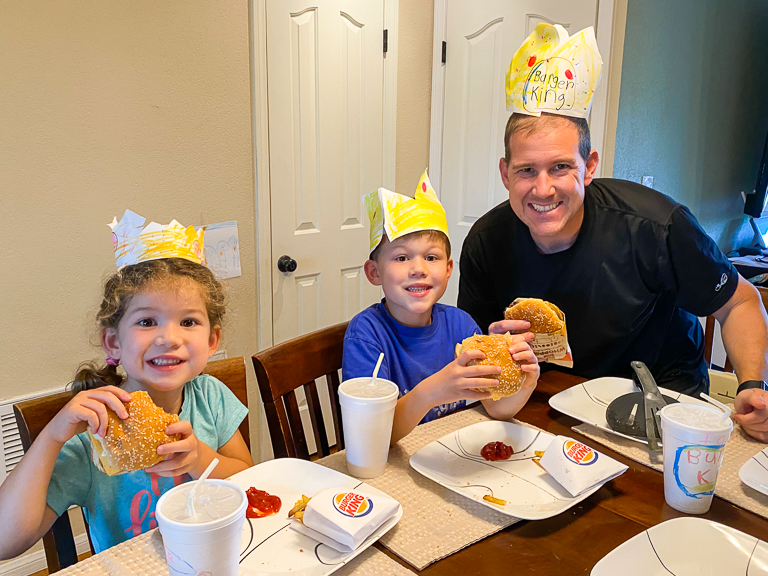 I made myself a triple Whopper! It was fantastic! 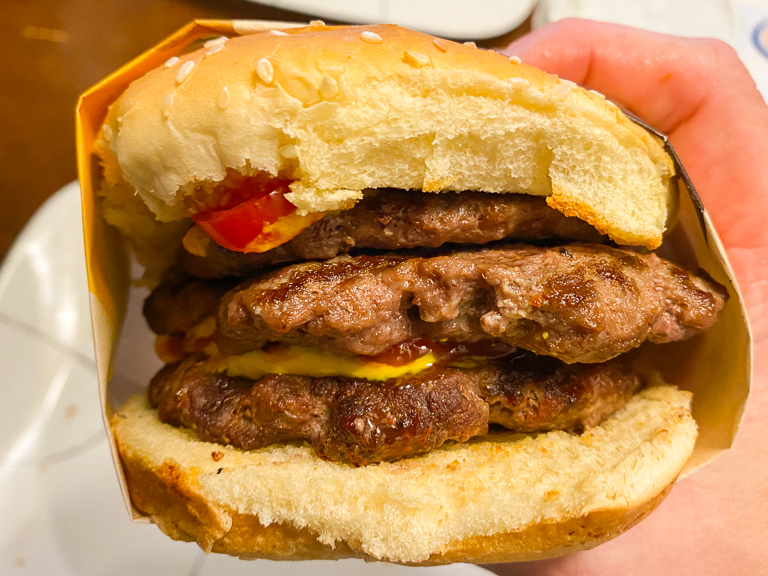 And Theresa thought they were tasty too. 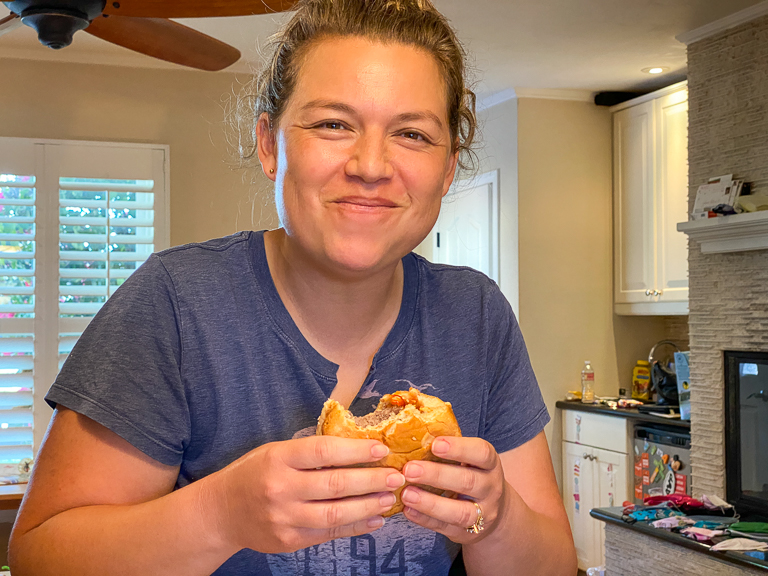 What'd you think of our homemade Burger King meal kids? Big thumbs up. 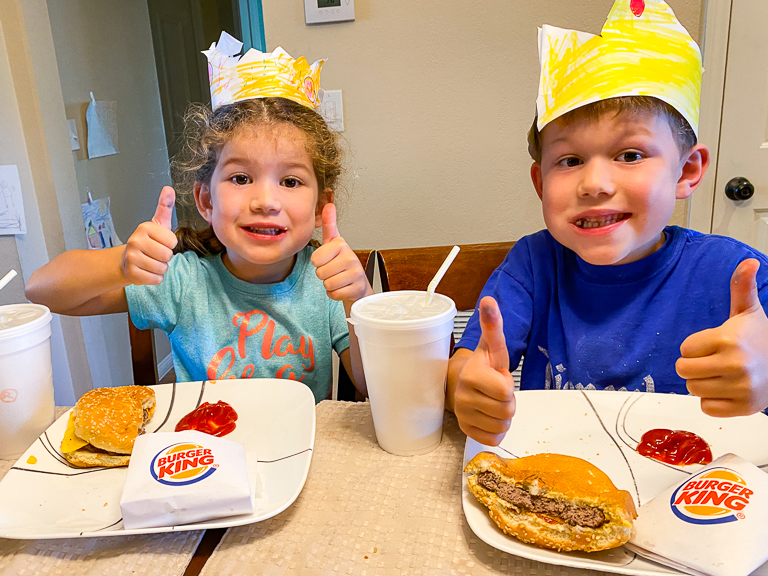 And wow, look at that clean plate. Ian said it was even better than the real Burger King!
I don't know about that, but I think this method for making burgers is a winner. Great job today Alli! I see some fun meals coming up for us in the future. 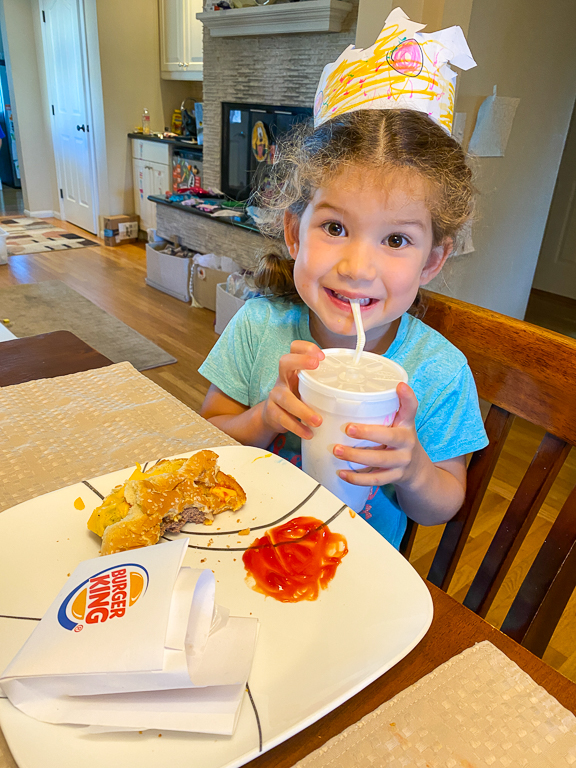 With full bellies and crowns on their head, they rode their cars home. 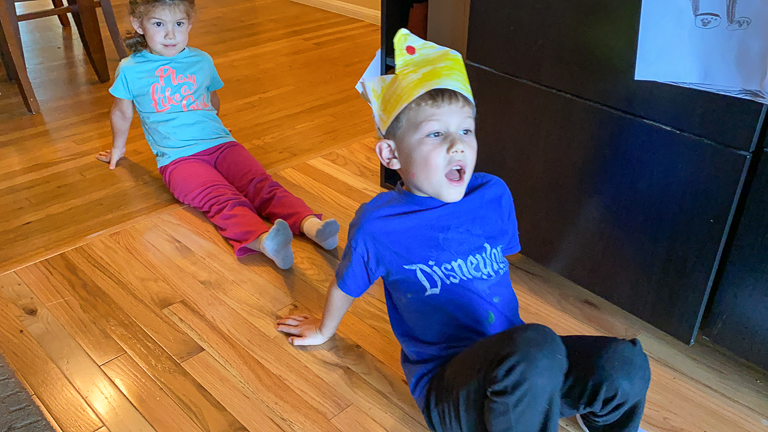 After the first one, I made sure to get a video of this trip too.

So that's Burger King made at home! Theresa and I have had some fun planning a few others we'll be having in the weeks to come.
Posted by Joe at 5:00 PM