Our time at Sherwood Forest RV park is coming to an end and now it's time to move back to the West side or Orlando. We're packing up the RV, leaving these tight spaces, and headed to over to Lake Magic RV Resort. 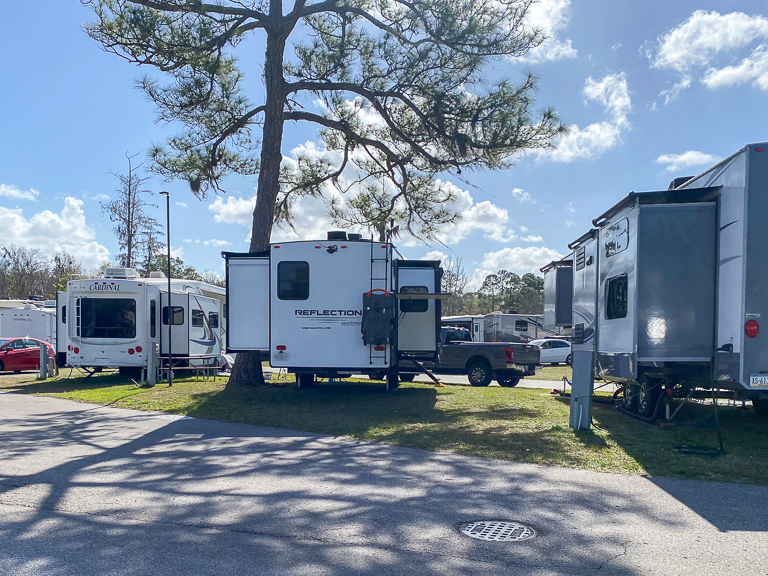 They're really good about communication here and sent us our site number a day early so I could scout it from satellite photos. We arrived about 15 minutes before the noon checkin time and just queued up. Once noon rolled around, we were allowed to drive over to our site. Ah, this is better. We've got a lot more space here! There's a whole front yard that we can use. 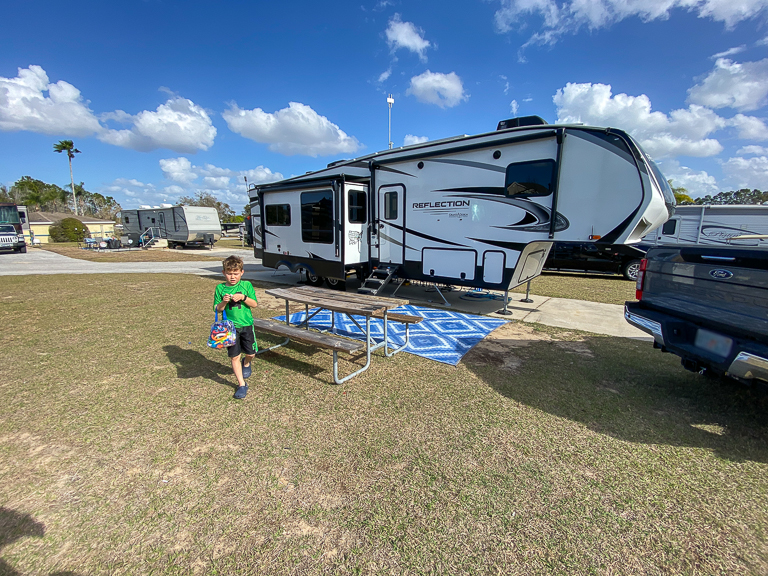 Along with all their regular school that both kids do online with Time4Learning, I'm enjoying all the extra things we get to teach them too. Ian's favorite class is coding. Alli loves Piano. Alli also really liked learning how to program html webpages, making her own "About Me" page and linking it to another page she made about her favorite Minecraft things. 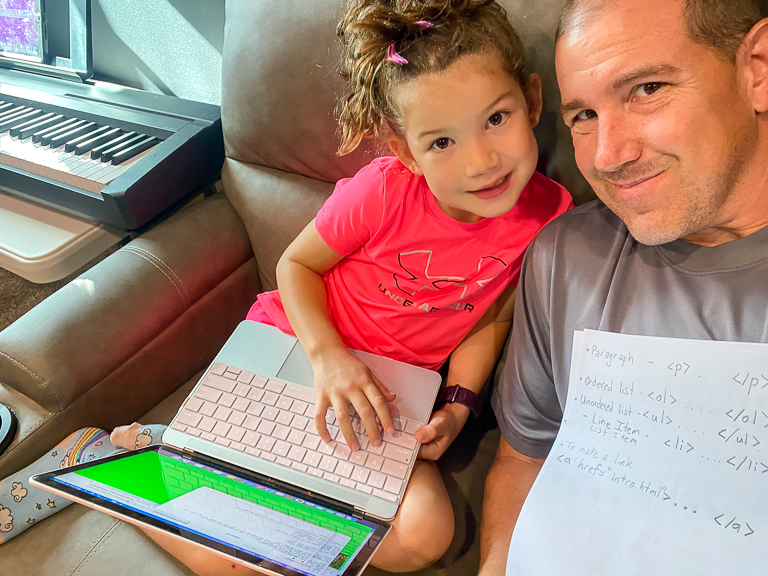 And let's not forget about PE! The kids can swim for hours! So much improvement since last year when they both were wearing float vests whenever they were in the water. 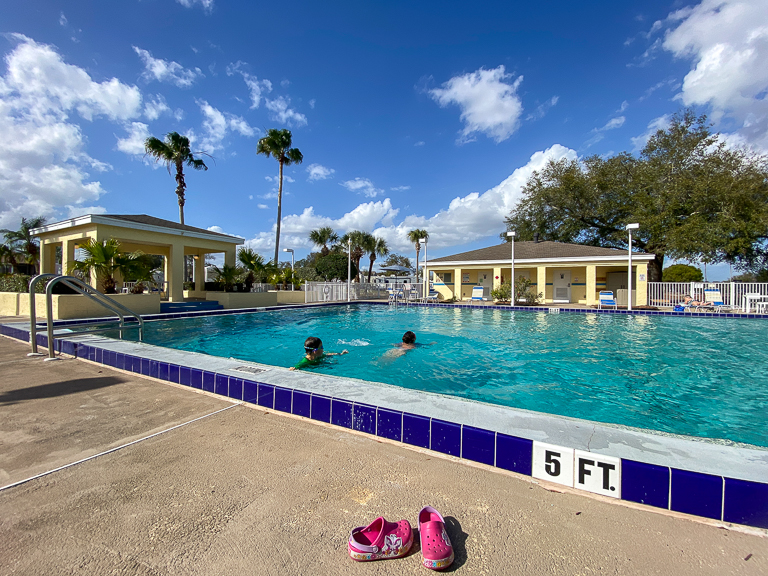 With so much exercising, we make sure to eat well. The kids love my homemade burgers. 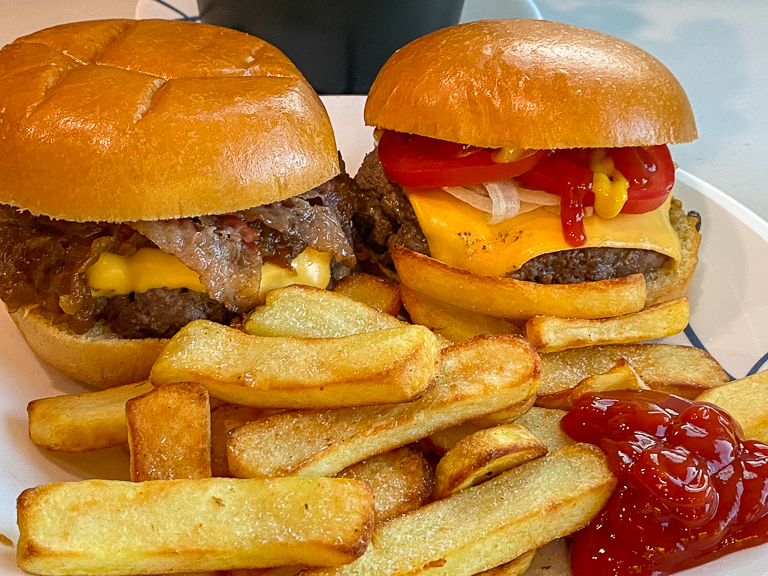 The kids love doing "special" things for us, and will disappear into their room for an hour, coming out only to ask for more paper or tape. When they finally emerge, there is usually something creative that they want us to participate in. This time it was a scavenger hunt around the RV, with a map and lots of prizes!
They made lots of drawings and other things we could win as prizes. 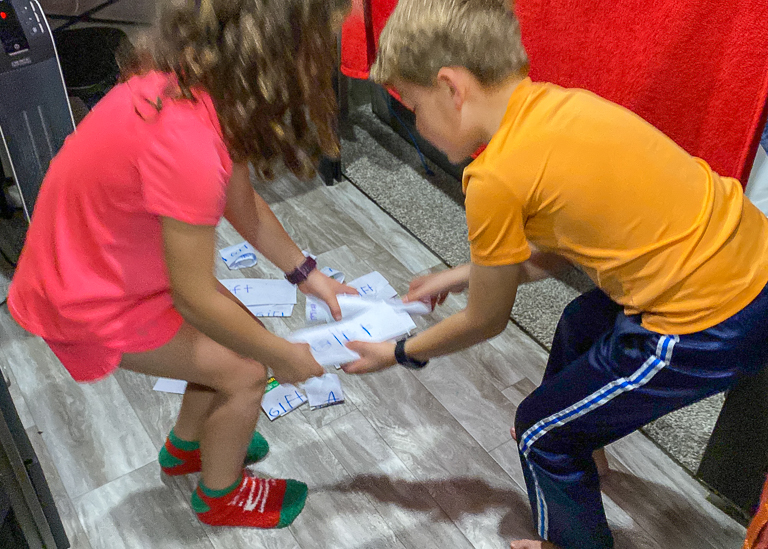 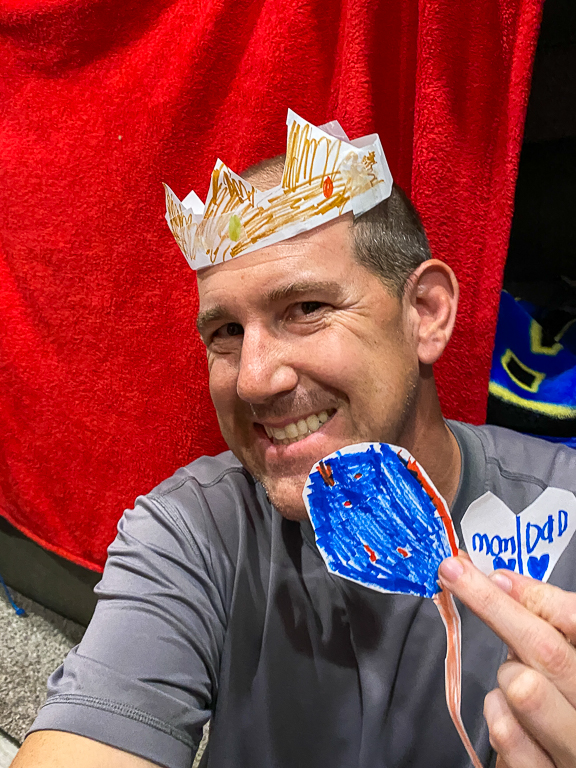 They wrapped most of them with "A Gift" paper. 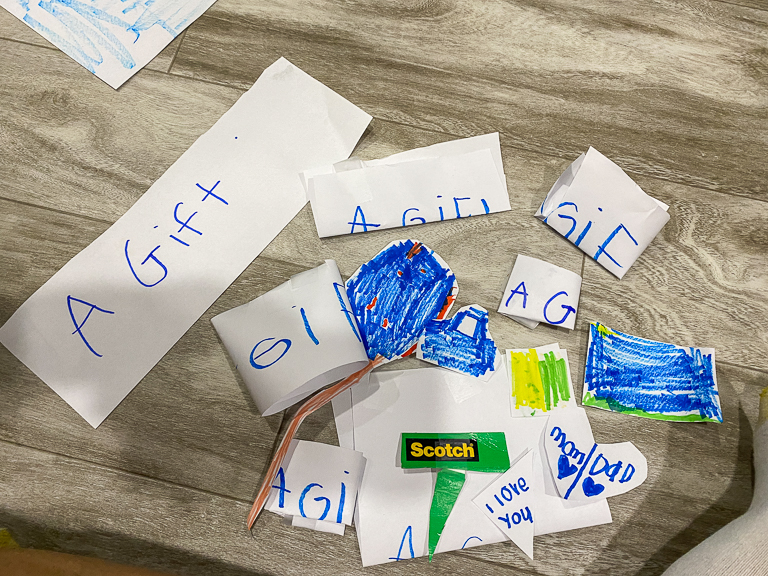 They even gave us decorations. 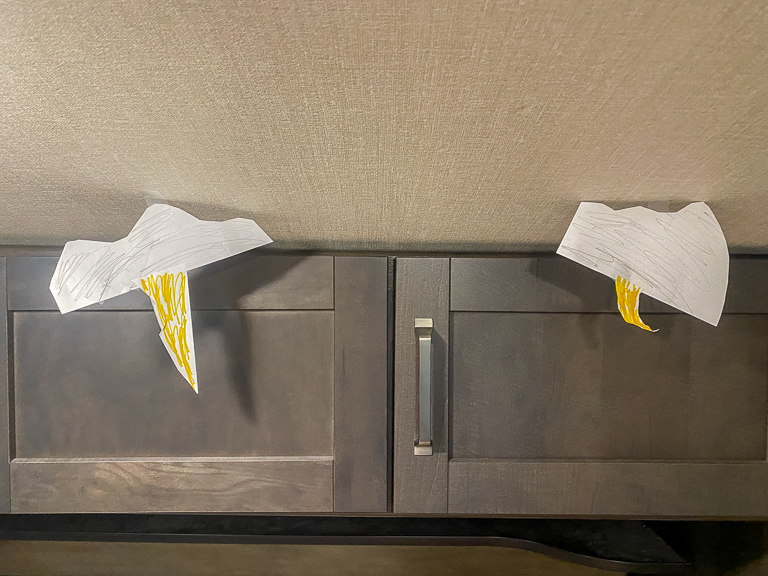 Now that we're back on this side of Orlando, we can get back into our bike riding! The Van Fleet Trail is great for getting our miles in. 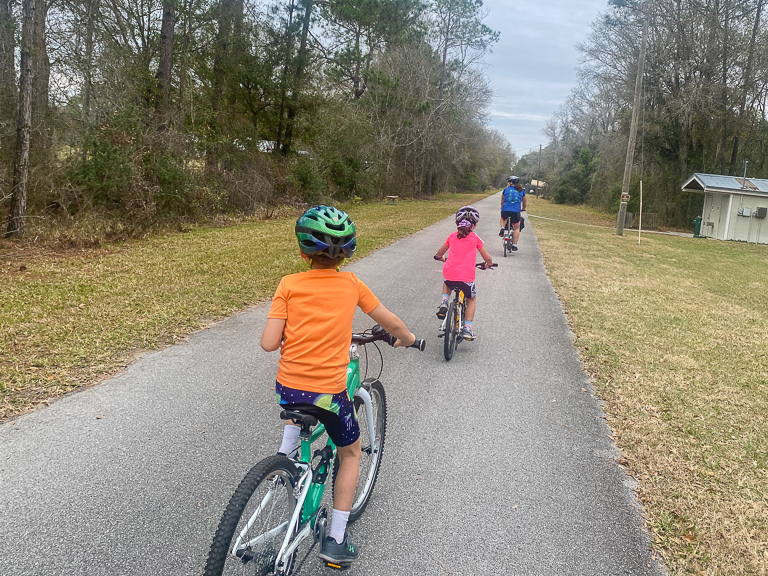 The kids love seeing all the different wildlife that's out and about. Like the big gators! 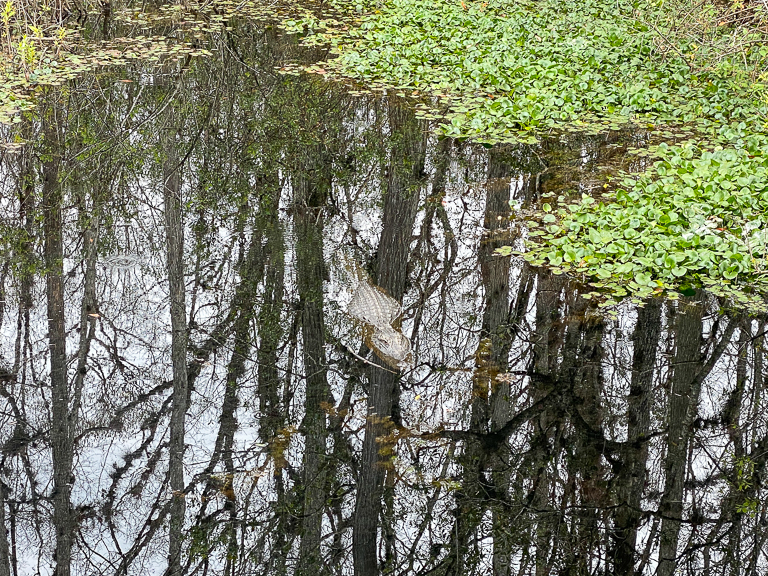 And we got to visit with Henry again! We brought carrots for the horses. 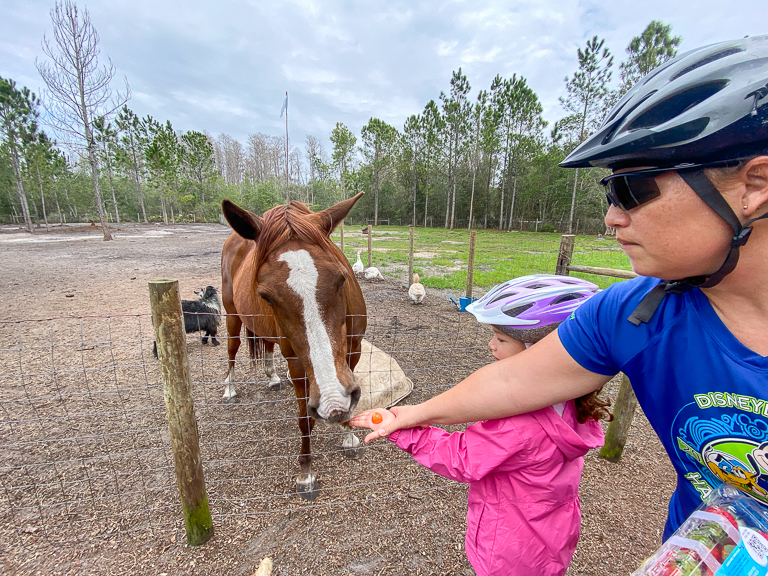 And Henry caught one of his Muscovy Ducks for us to pet. They do have soft feathers. We love all the different animals Henry has at his place. 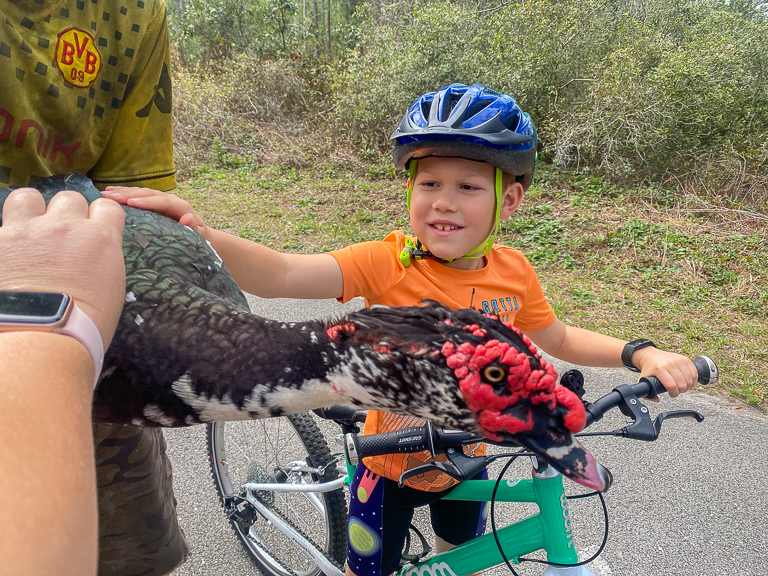 After a long 33 mile bike ride like this, the kids were happy to have a Little Caesars pizza for dinner. They love pizza in all forms. 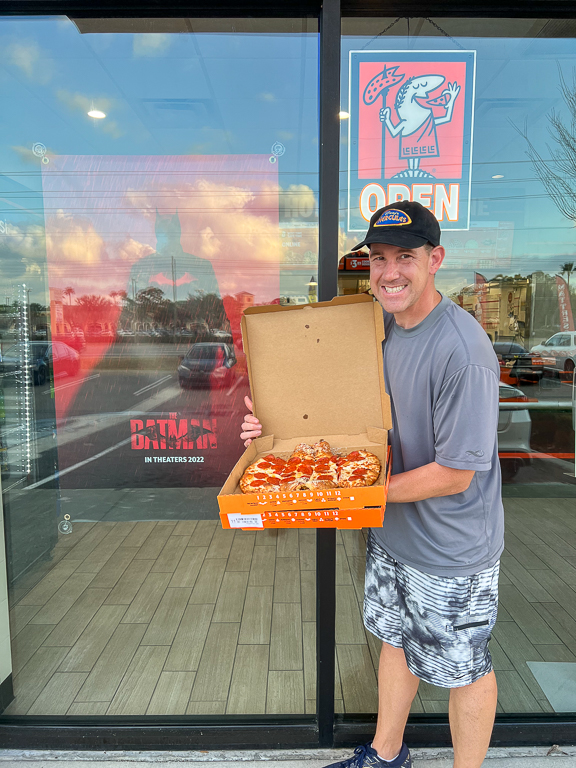 And right now there's a special Batman Calzony with pepperoni slice and white sauce cheese calzone pieces too. It's delicious! 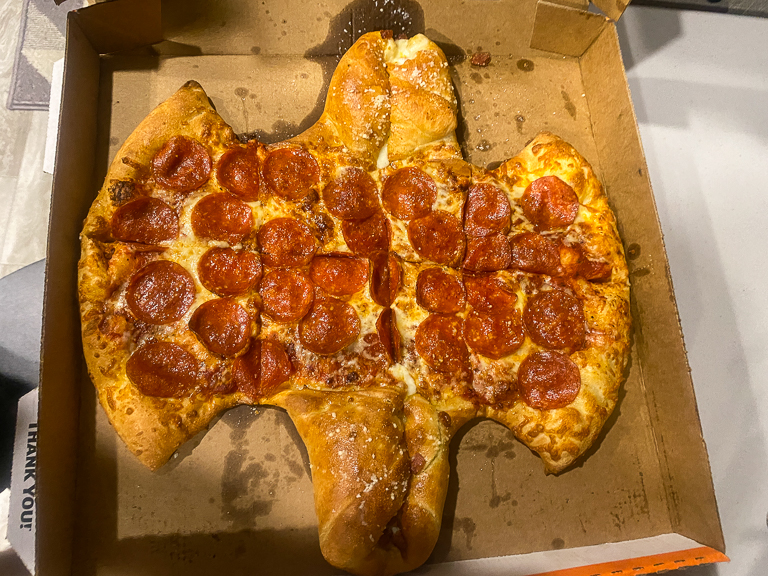 Just a couple days later, we were back on the trail again, racking up more miles to count for our 600 mile challenge this year. 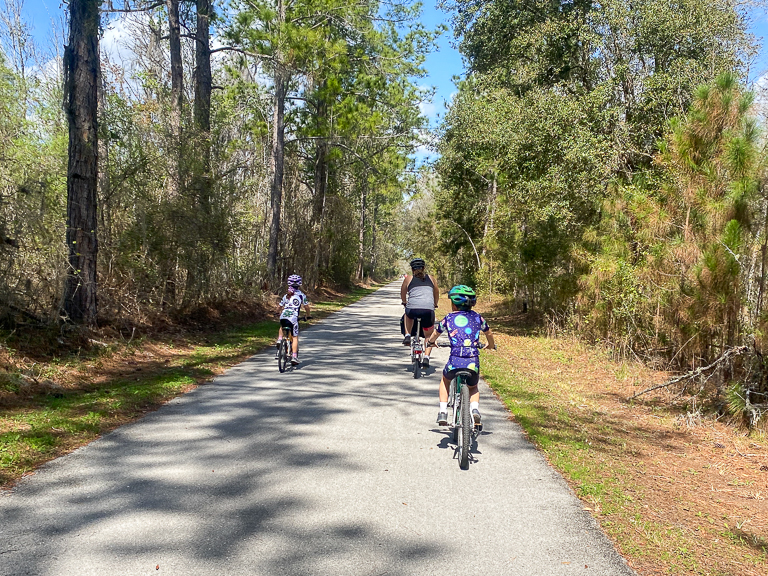 At "The Bridges" portion of the trail, there's always something interesting to see. Usually alligators and turtles, but today we found something different. Many days we'll see a black bird sitting in the trees nearby. Today though this bird was swimming in the water, and the alligator was very interested.
This is a snake bird, also known as an Anhinga. The feathers on the Anhinga doesn't have the same oils with the ability to repel water like a duck, and so instead of swimming on top of the water, they swim underneath it, with just their long necks sticking out, looking like a snake! 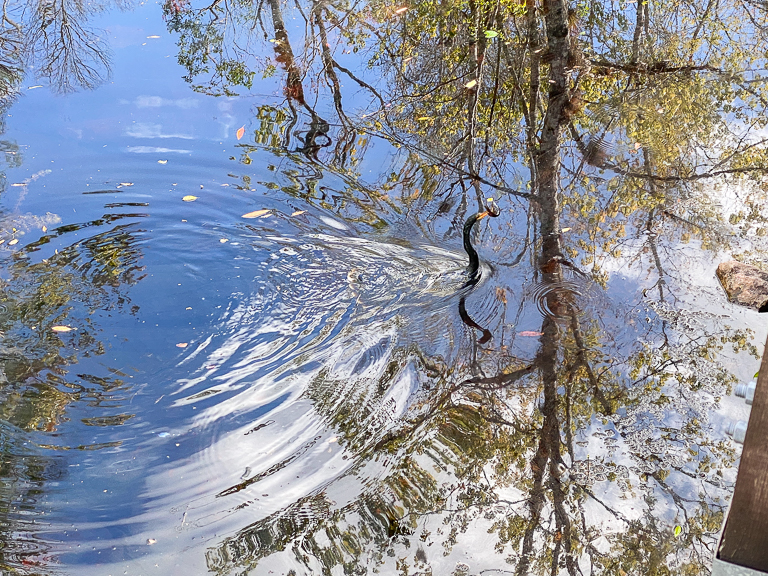 The Anhinga has a sharp beak that it uses to spear fish. It has learned to take those fish out of the water and beat them against a rock or tree until they finally stop moving and won't escape when they try to eat them. 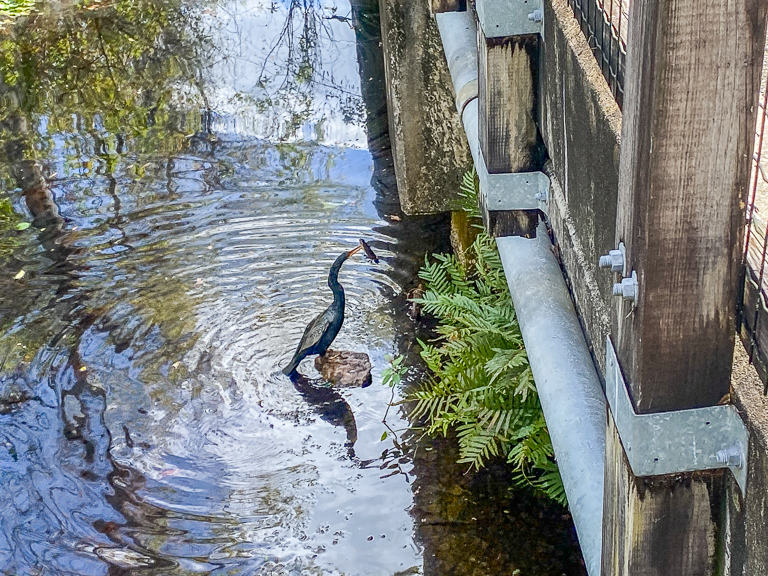 A video I took.
The kids love the snacks halfway through the ride. Just 20 miles today. The kids can throw 20 miles down now like it's nothing. 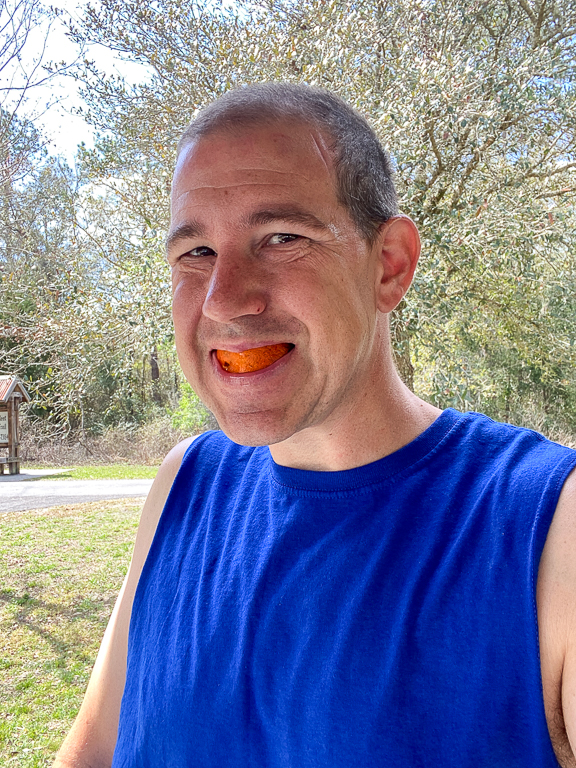 We've seen many animals, but this is the first wild dog we've seen. It looked like it might have been someone's pet, but it's super skinny and must have been out here for a little while. It would run ahead of us, pause until we got 20 yards away, and take off running again. It ran ahead of us for about a mile before it finally ran off the path and into the woods. 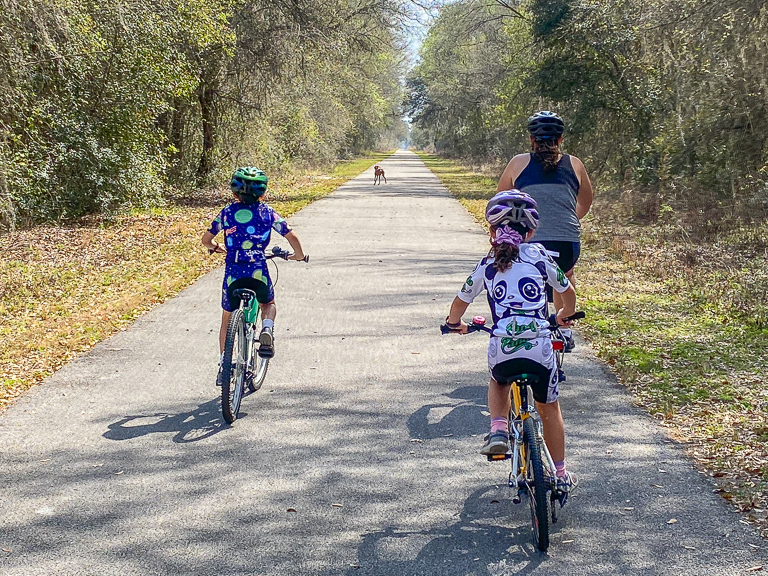 The kids named him Loper because it would trot ahead of us.
We're only here at Lake Magic for 6 days before it was time to move again, this time to Orlando RV Resort, one of our favorite places to stay while we're in Orlando! Better get one more swim in! 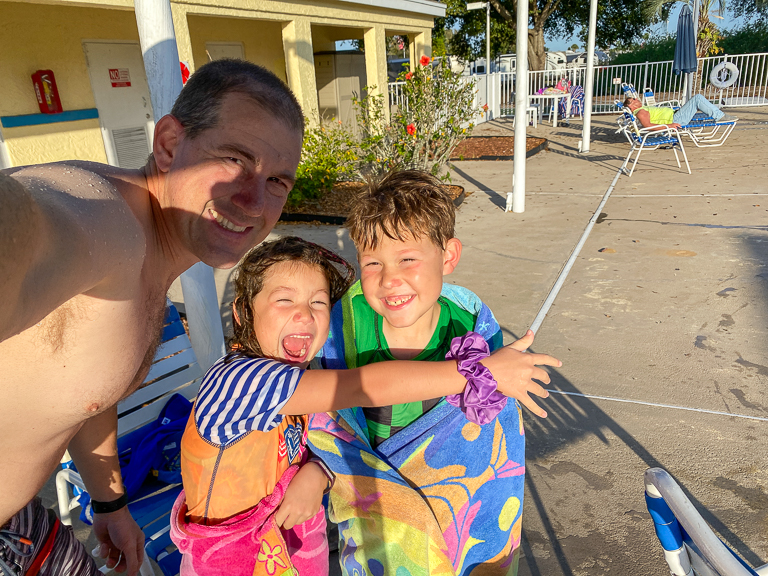