Happy St Patrick's Day! Today is one of those holidays that the kids just love to celebrate! Let's jump right into it! 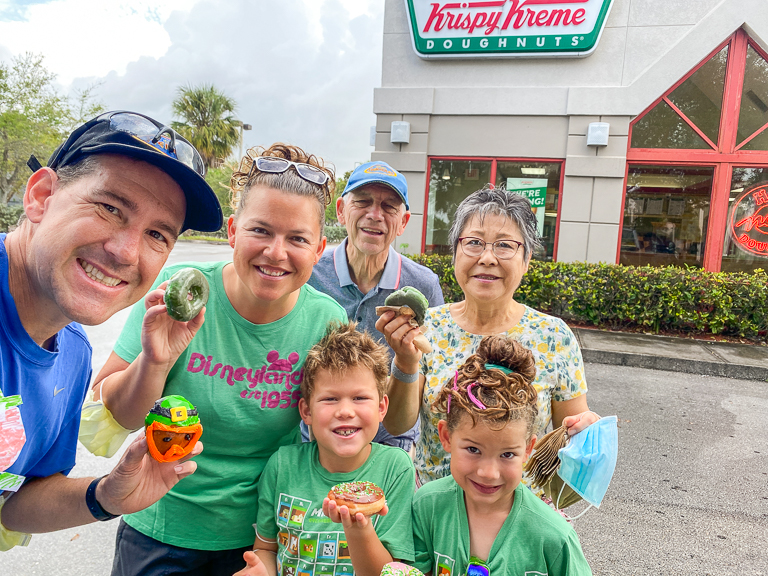 The kids love trying to catch a leprechaun the night before St Patrick's Day. They've been doing it since 2019. Oh, they were so little back then. In 2020, they went with a pretty elaborate trap to catch Lucky. In 2021, they filled an entire wall with drawings of leprechauns, usually doing naughty things, to go along with their traps. This year, they've scaled things back a little bit.
Alli came up with 1 idea for her trap.
Alli - Daddy, where is the tape?
I had no idea she'd use that much! She covered an entire piece of paper with tape and placed a gold coin in the middle. Ian asked for a couple paper bowls. He taped them together and used scissors to cut a window, expecting Lucky to lock himself in. 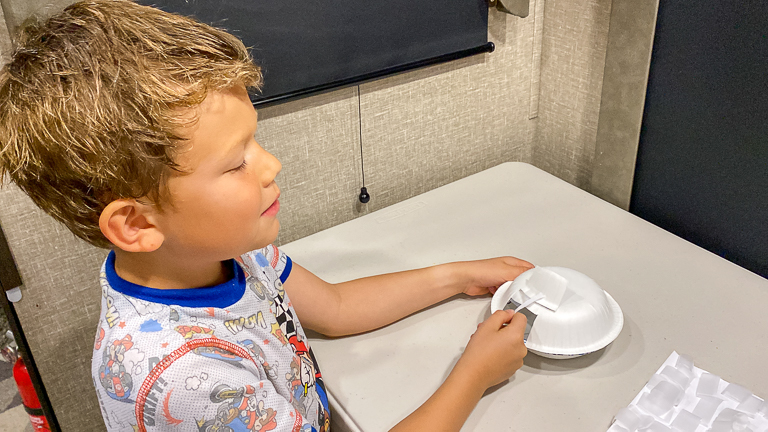 His other idea was a gold coin attached to a string, and when Lucky pulls it, the bowl falls on top of him. Uh, guys, I hate to say this, but Lucky might not have come with us in the RV this year.
Ian - That's okay! <runs off> 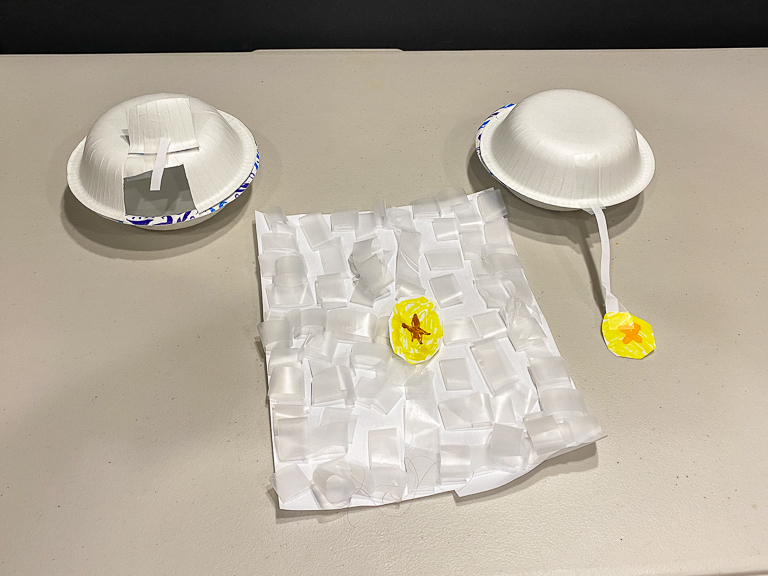 A few minutes later he was back with this little guy. 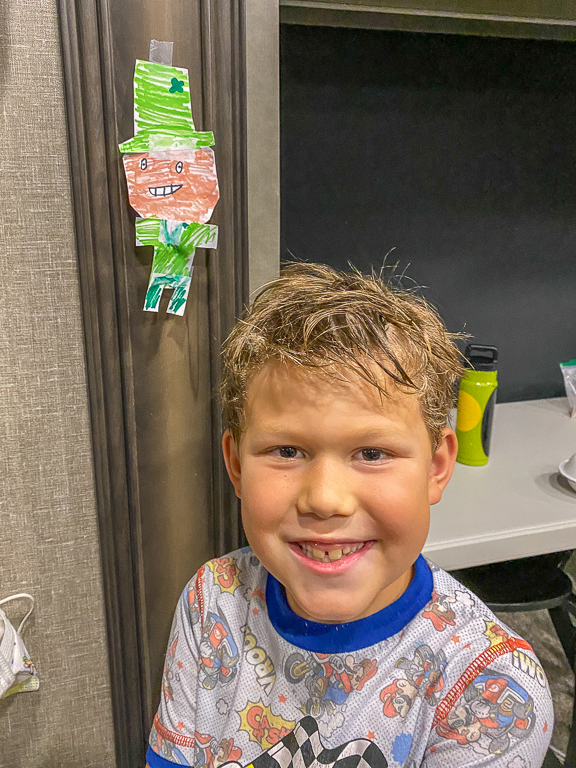 I love it Ian! Way to solve the problem! 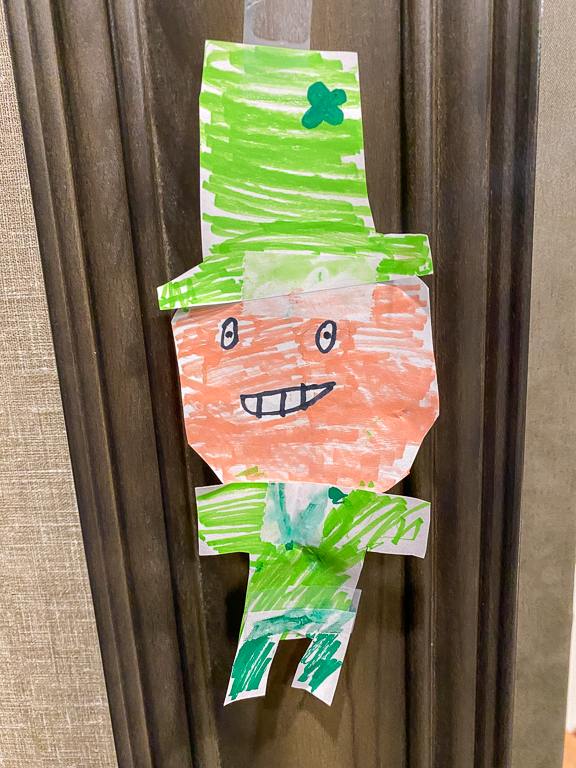 The next morning, the kids were all appropriately dressed in green. When they checked on their leprechaun trap, they had been sprung! 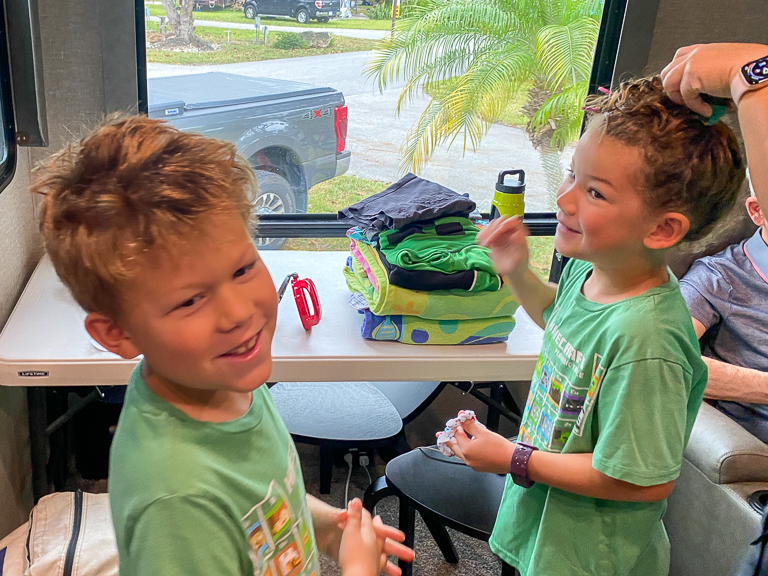 Looks like it took both traps to catch a leprechaun this year! He must have went under Ian's bowl and then shuffled his way over into Alli's tape trap. 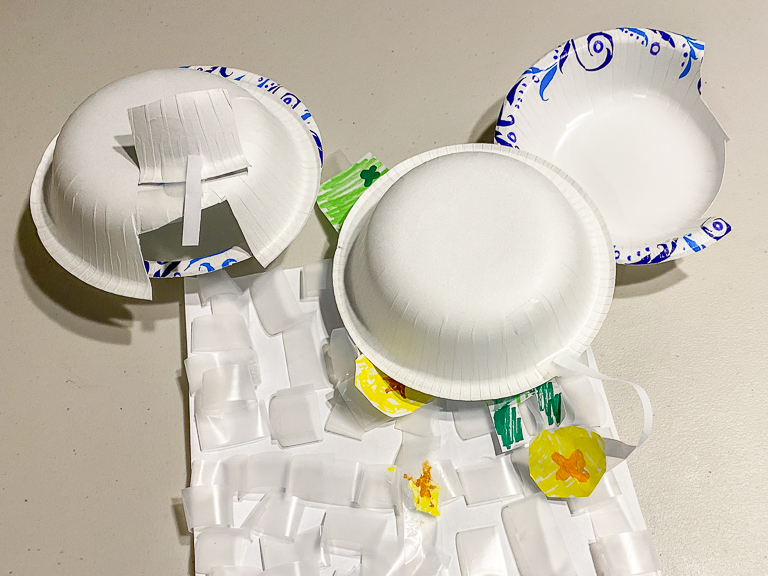 Good job kids! Though Ian was a little disappointed that Lucky didn't leave any gold coins this year. D'oh! 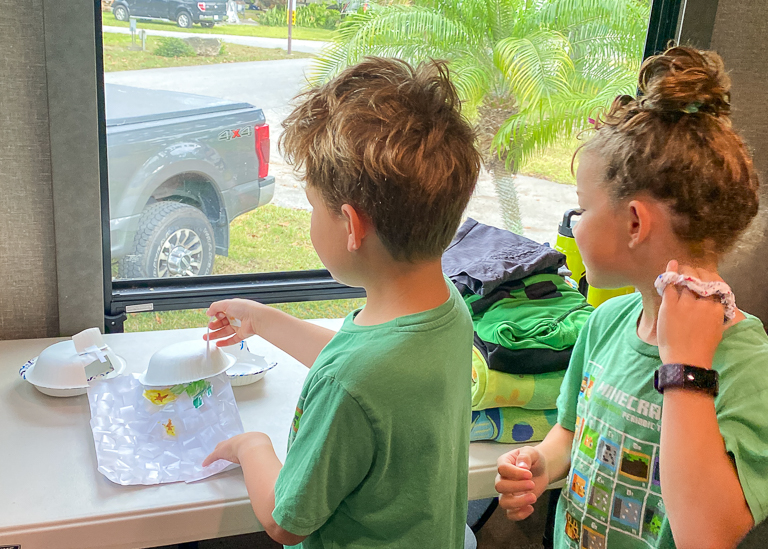 In their own words.
One other thing the kids love is getting green donuts from Krispy Kreme. There happened to be one nearby our RV park. And they've got Hot Doughnuts Now! 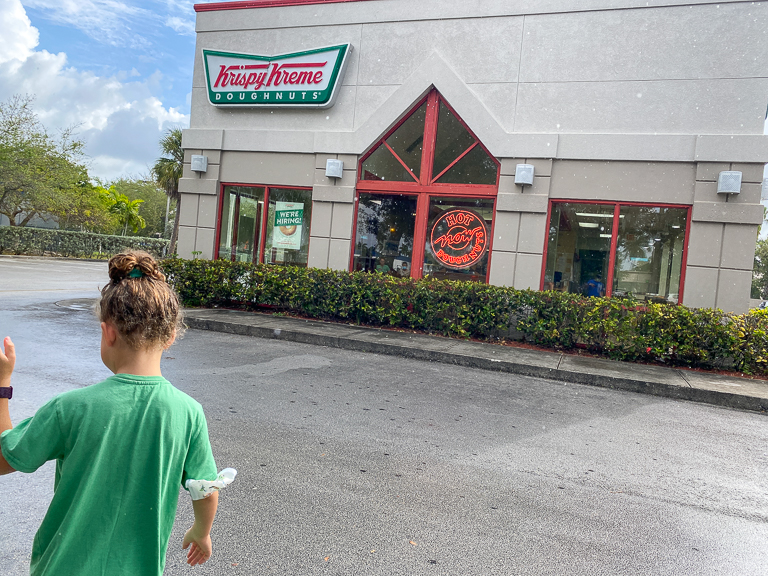 Huh. Interesting. Looks like this Krispy Kreme doesn't actually cook the donuts here. There were racks and racks of pre-cooked donuts, and when they needed them, the workers put them on a belt that goes through an oven to reheat them. After they're warmed, they get that signature glaze and go into a box. I guess that's one way to always have hot donuts. 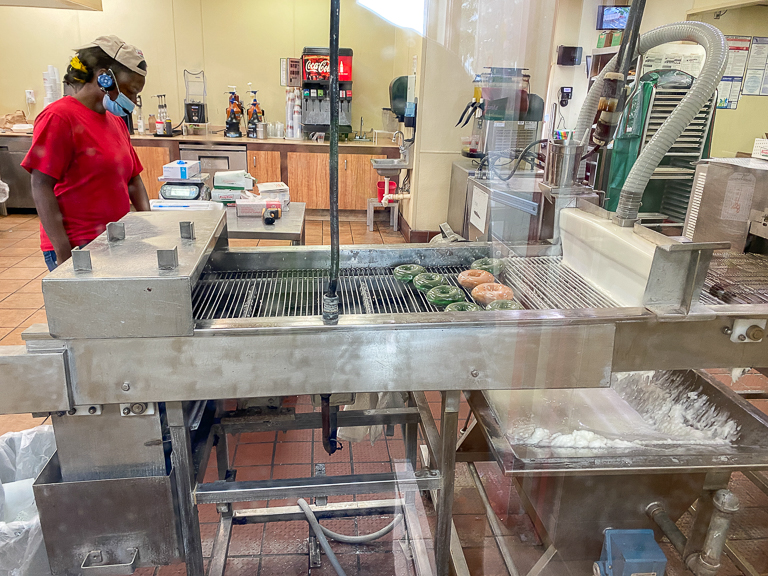 Maybe that's also why they were sold out of so many of the specialty St Patrick's Day donuts. We asked and the worker said they only have what we can see. 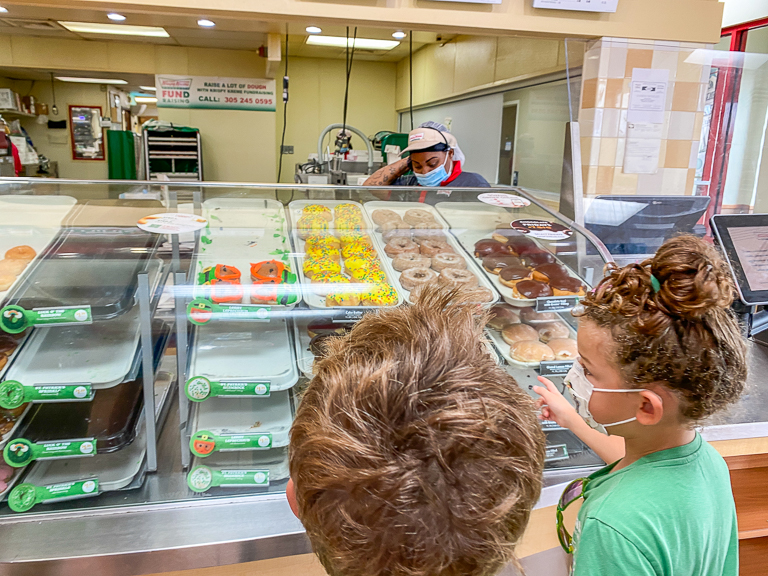 In the end, we got an assorted dozen with lots of different St Patrick's day treats. We're all wearing so form of green, and there's supposed to be a deal where you get a free donut if you're wearing green. The worker didn't seem to be in a good mood though, so we just ordered our dozen and didn't mention it. Once we paid, she went to the back and surprised us by throwing an extra 6 green donuts on top of our assorted dozen! Thanks! 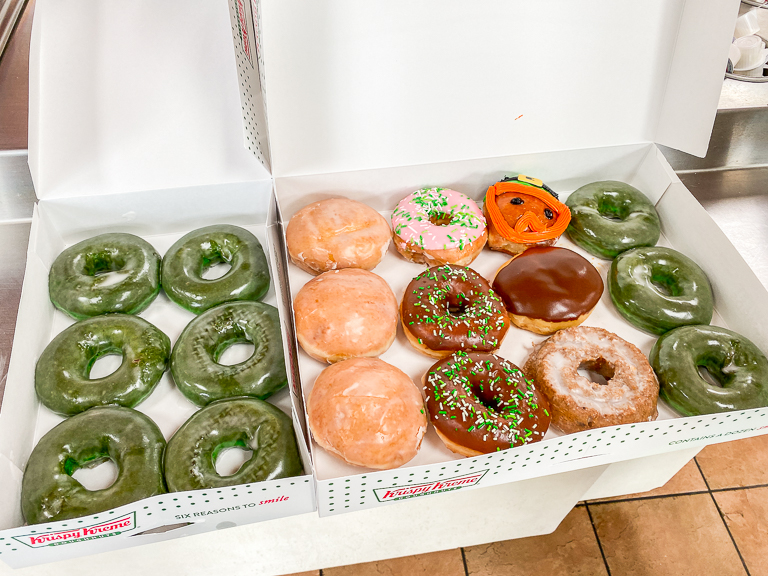 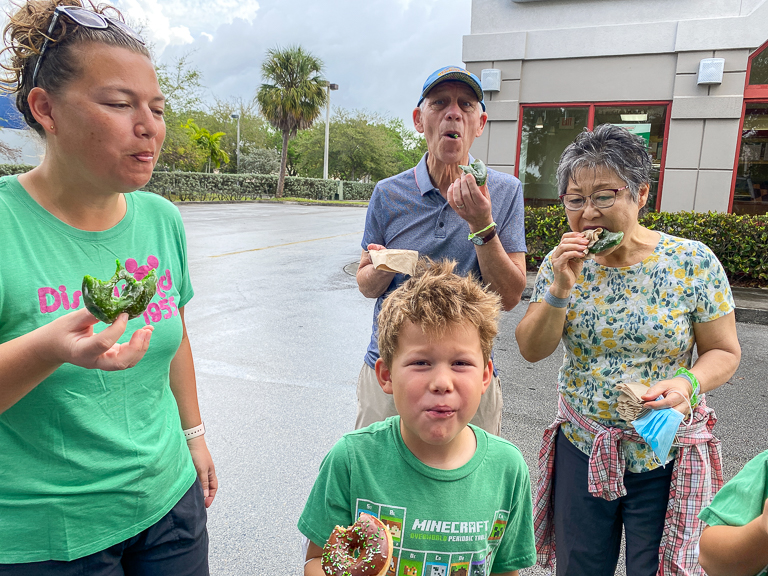 The kids love their chocolate covered ones with sprinkles. 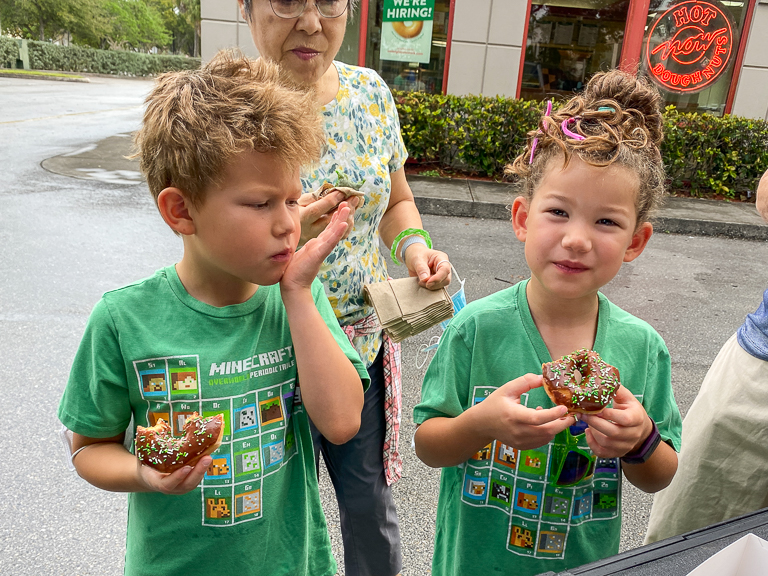 I got a Lenny the Leprechaun donut. Cute little guy huh. 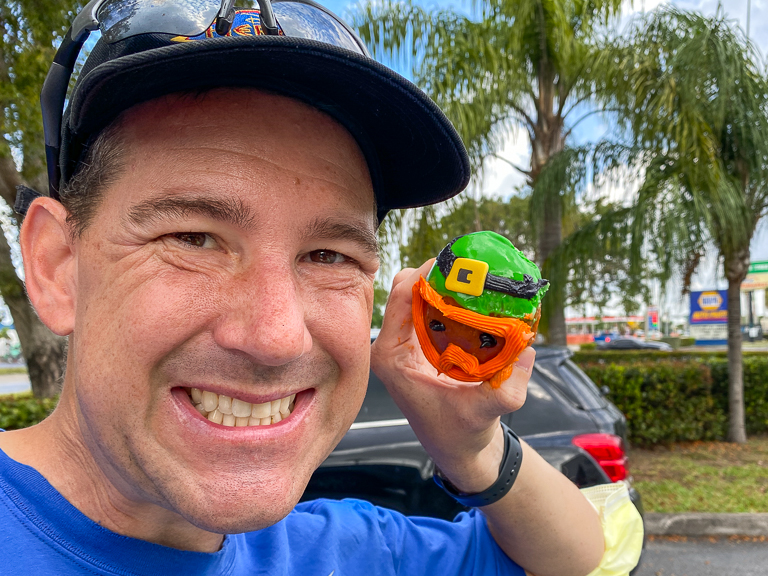 Grammy think they have too much sugar on them. Have you seen someone scraping frosting off a Krispy Kreme donut before? 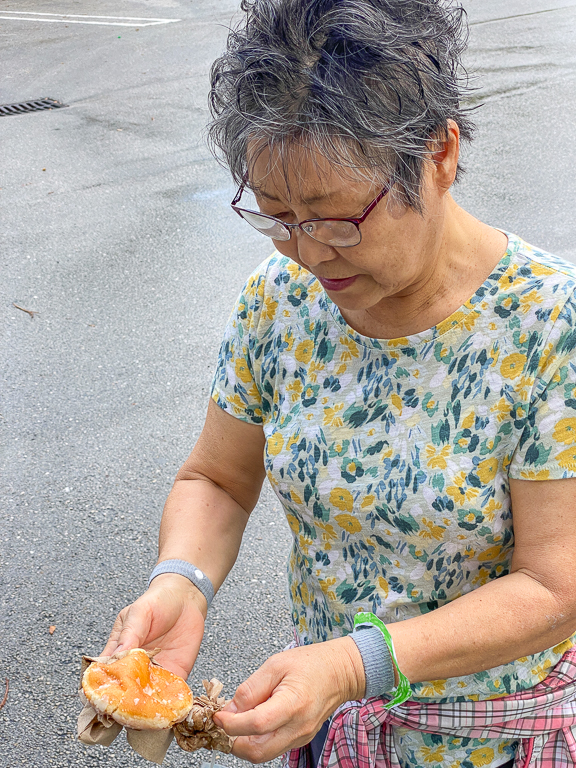 It's hard to beat those donuts that come out hot. They melt in your mouth. 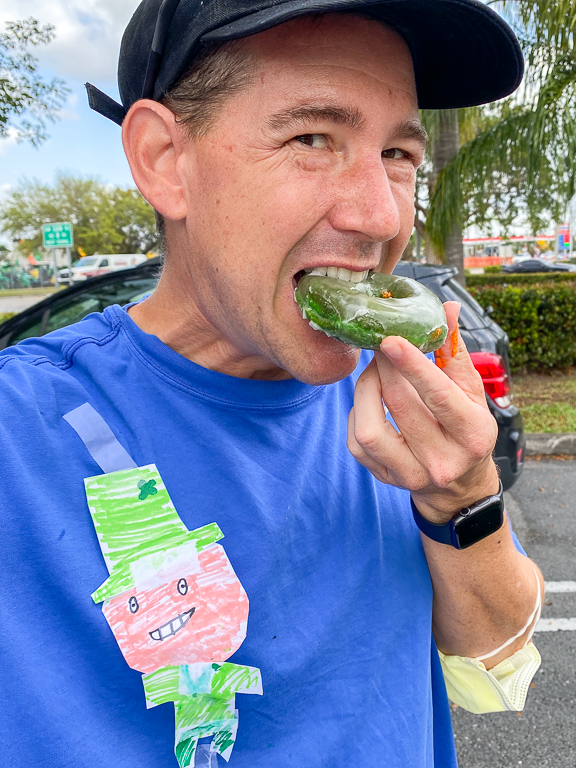 And being pre-cooked and reheated didn't impact anything from what we could tell. They still were the lightest fluffiest donuts you've had. They collapse when you try to pick them up. The insides are bright green. It's been a fun St Patrick's Day! Hope it's been lucky for you too! 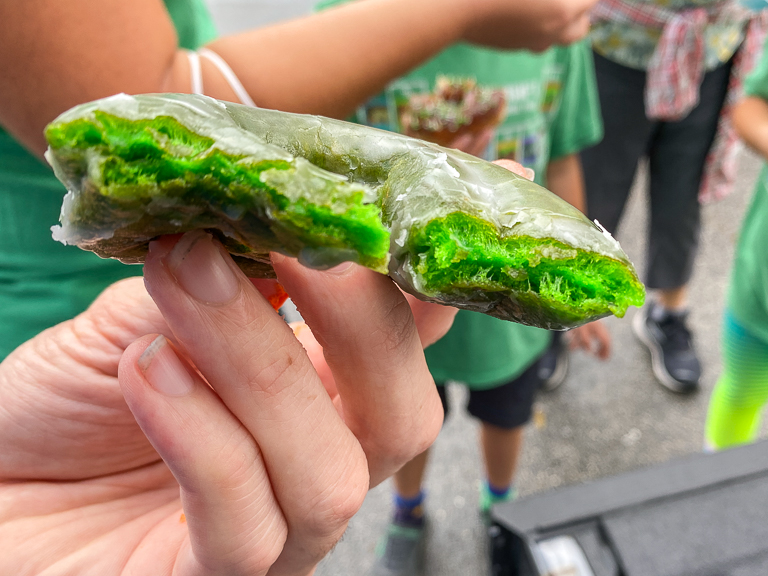