Today is a big one for us. We've been working up to this for a little while now. When family isn't visiting (which is actually a rare occasion these days) we try to get our bicycling milage in. Our favorite place is the Van Fleet Rail Trail. It's flat with minimal road crossings and quite a few interesting things to see. But today we're going to take a big chunk out of that 600 mile goal for the year. Today we're pushing for 40 miles! 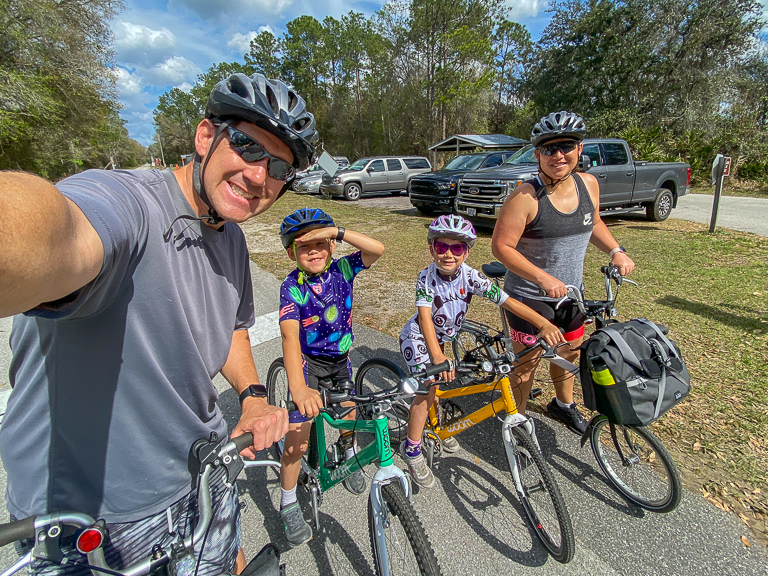 And that's not something we're just going to ask the kids to do without building up to it. We've been pushing our milage for the last few weeks, doing longer bike rides and doing them more frequently. The kids are really building up their endurance! At one point we did 100+ miles in only 7 days! 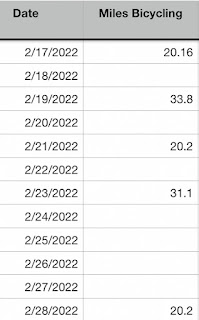 So, when we marked the calendar as "Long Bike Ride", the kids were just as excited as we were to be attempting a record setting bike ride. And they like going on this trail because of all the interesting things there are to see. They love seeing all the tortoises, especially the baby ones. There's some that are no bigger than their palms, and others almost as large as a beach ball. 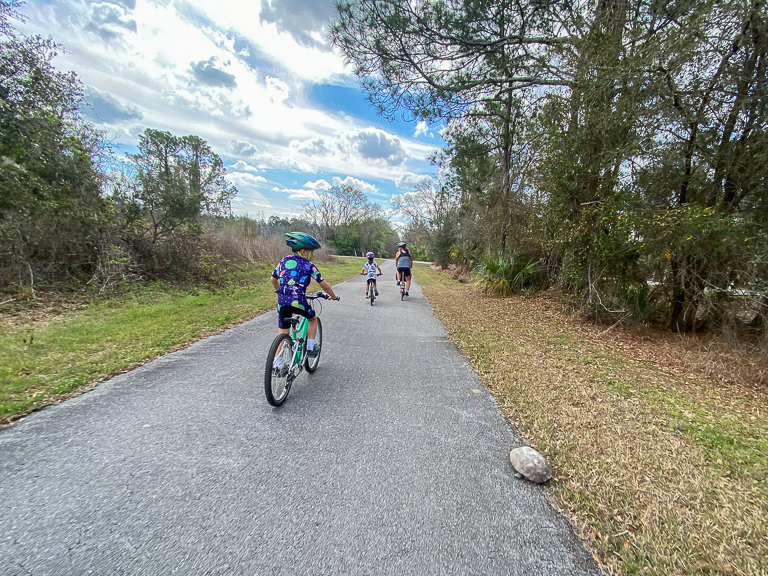 It's bright and sunny out today, but thankfully the temperatures are low 80s and the winds are calm. Along the way, we planned on taking multiple water breaks. Normally we'll carry 1.5 gallons for everyone. Knowing this was coming up, Theresa bought 2 more half gallon thermoses so we'd have plenty. 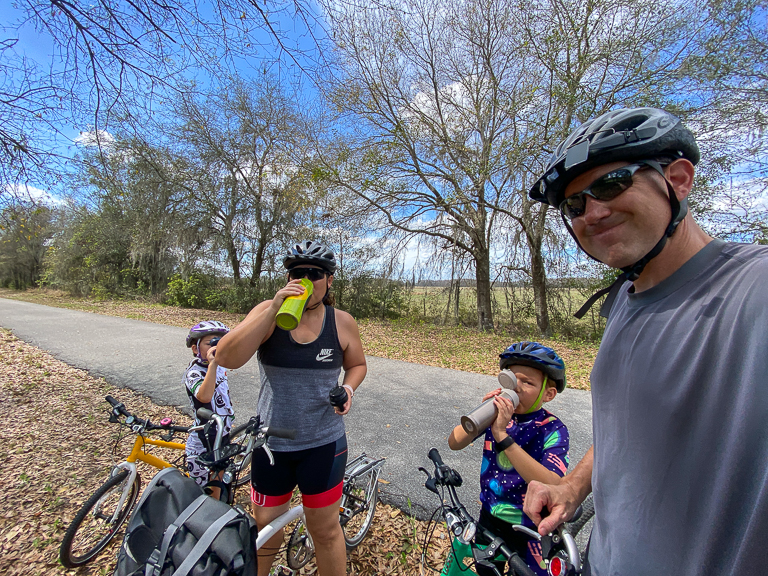 Every 10 miles, we planned a major break. Theresa packed fruit, veggies, and other snacks to keep their energy up. Sour Patch Kids were always requested right before we'd start a leg, and they'd try to keep them in their mouth as long as they could before they finally dissolved. 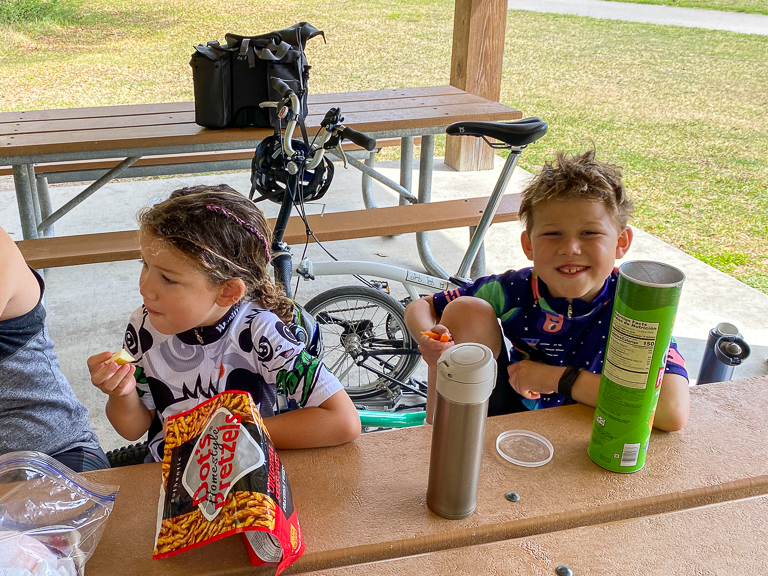 Leaving the Polk City Trailhead. We don't push the pace too hard. It's a comfortable 10mph or so when we're riding.

Back at the Green Pond Trailhead, we're halfway done! 20 miles completed! This is where we parked the truck so we'd have a convenient "base" to leave half of our stuff so we wouldn't have to carry everything with us. Before the ride I cooked up some hot dogs and put them in hot water in a thermos. They came out of that thermos steaming hot, and were perfect for lunch. 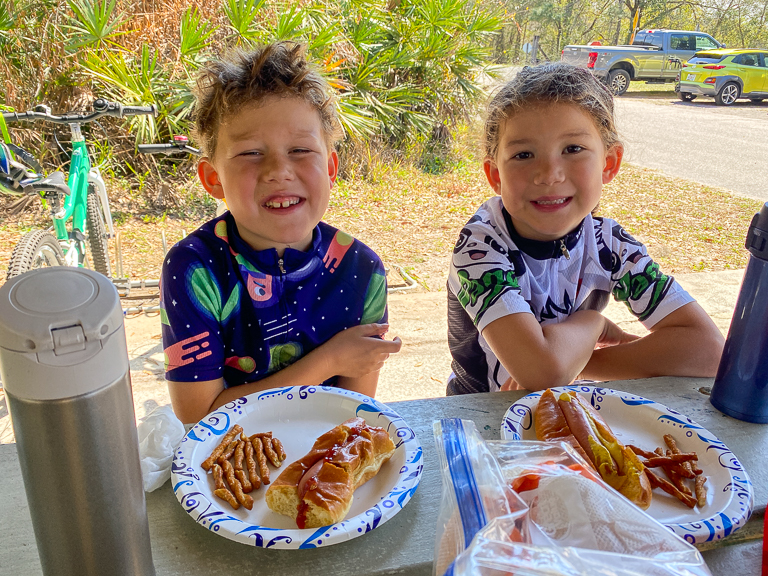 Theresa's hot dog is a little different than everyone elses. 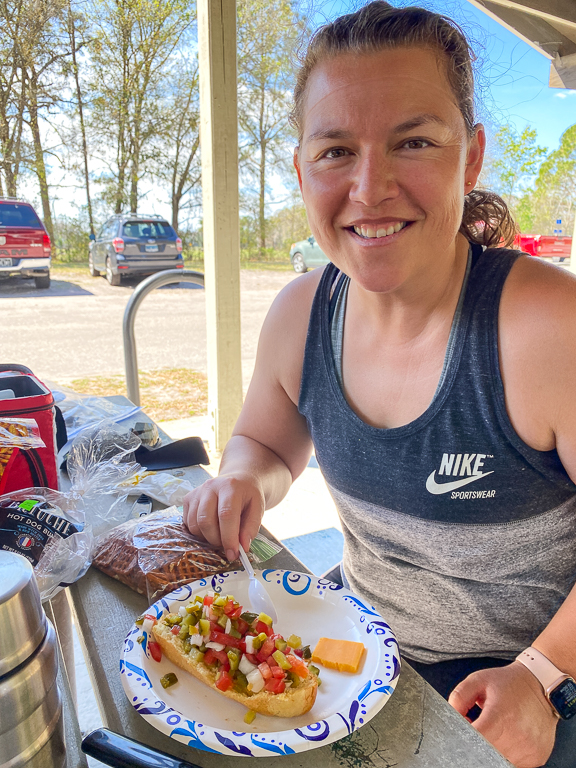 She swears there's a hot dog underneath all those tomatoes, pickles, onions, and jalapeños. 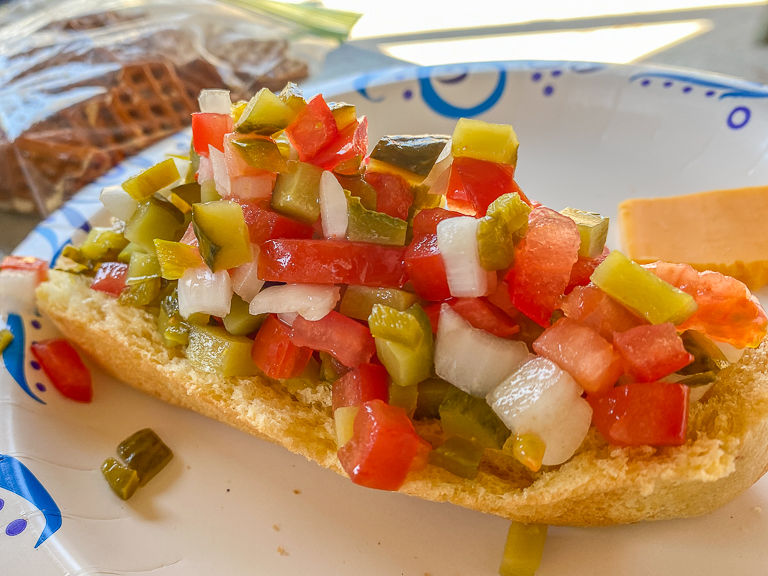 With everyone refueled, we're ready to ride north for the second half. 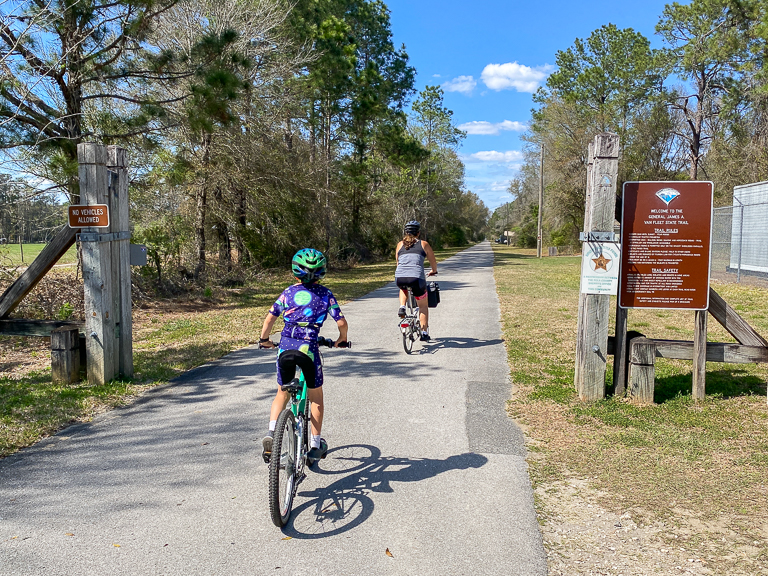 Everyone's legs are feeling great. Those long stops are good for recovery. 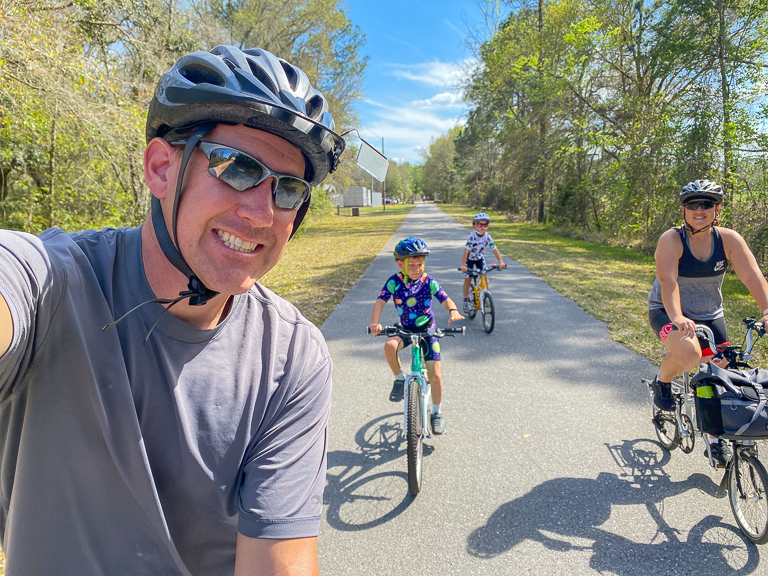 We like stopping at the bridges to see all the animals. These gators are a staple here. In all our rides here, we only missed them one time. 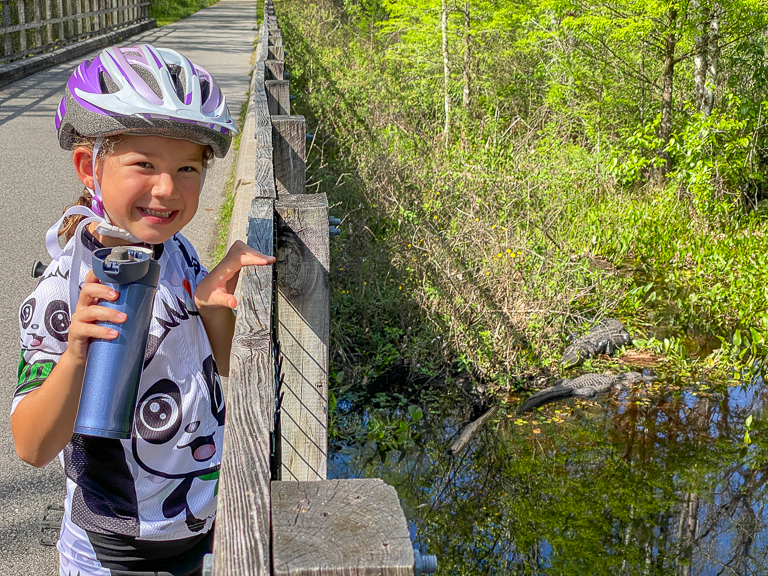 A few miles later, Theresa and Alli came to a skidding stop while Ian and I braked hard to not run into them. Ah! That's why! A snake is making its way across the trail. It freaked the kids out a bit. The snake noticed us and quickly turned around to get back off the trail. 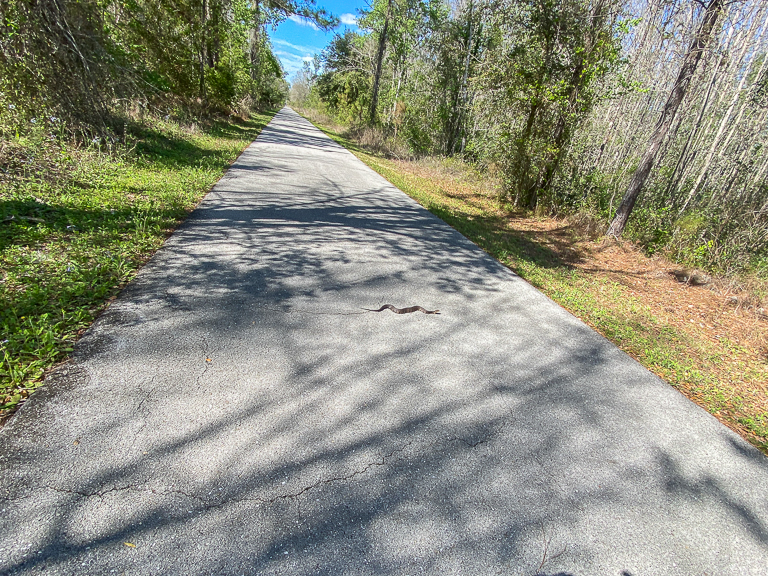 Theresa and I have both been impressed with both kids. Neither of them complain about this being too difficult, or being tired. I love that the trail had major markers every half mile, and rest stops every 10 miles. They can figure out how many more miles it is to go without having to ask us constantly. 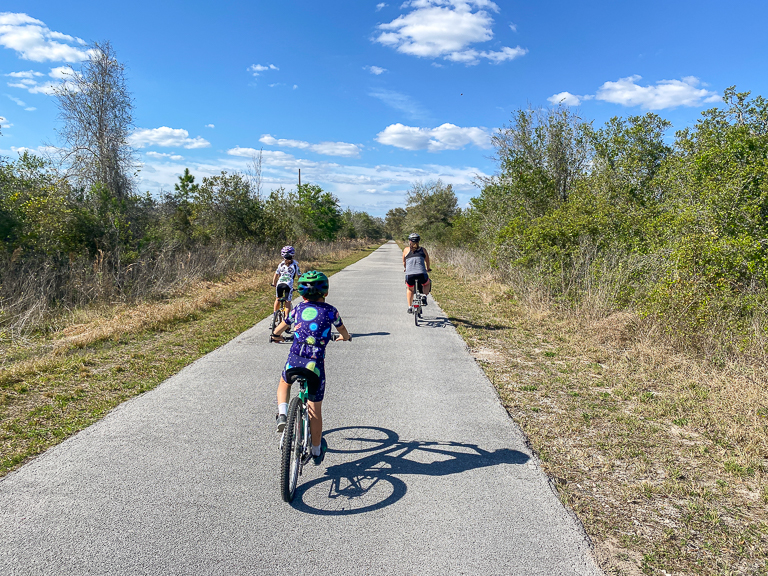 30 miles in and everyone is still smiling! The people we meet out here are great. People share the picnic tables and are easy to chat with. 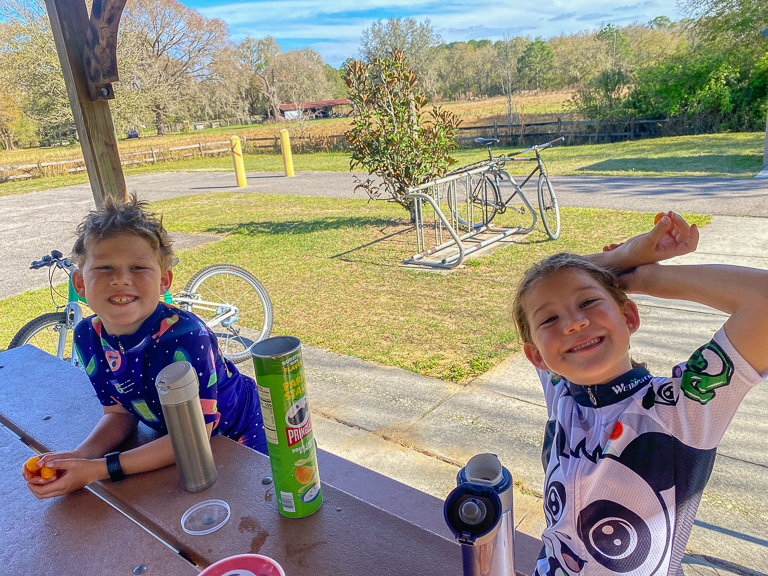 We have seen a whole bunch of animals on the trail, but this is the first time seeing a horse. Its hooves were click clacking on the pavement while the rider took it through a lot of different gaits. It was a very well trained horse.
Time to turn around and do the 10 miles back to the truck. Today we're going to be beating our previous 33 mile (We said we were in Club 33 when did it) record. 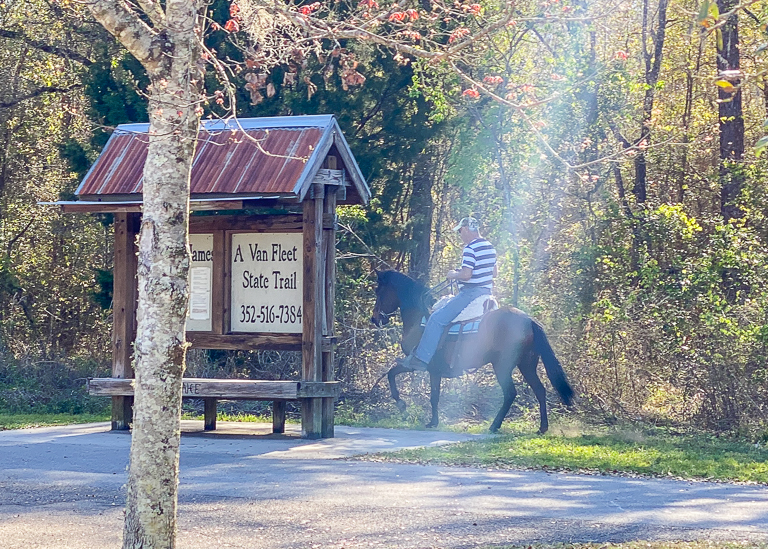 As we got to mile marker 15 on the trail, we always see chickens and ducks along the trail. 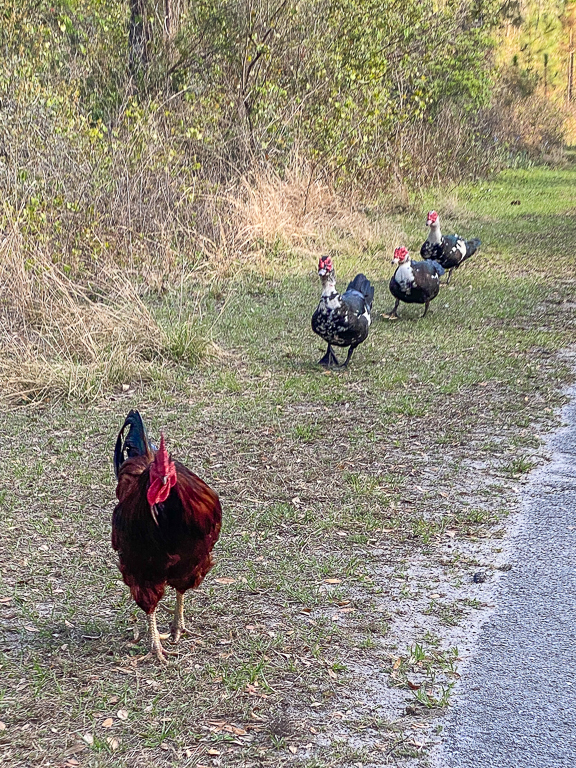 That's because we're at our friend Henry's place! The kids always want to stop and visit.
Lurch the turkey seems to have some personal beef with Ian. Ian has been whacked by his feathers multiple times now. 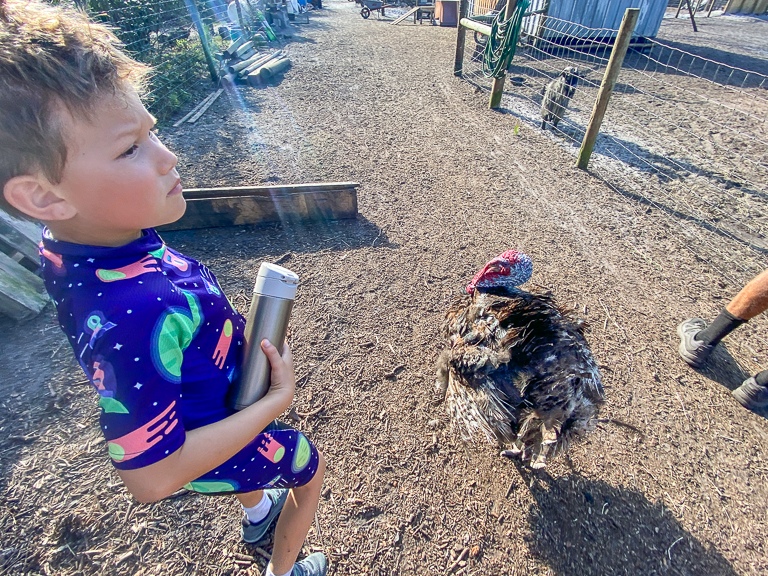 Today we're bringing snacks for a few of his animals. The kids have had carrots as part of their snacks today, and Theresa saved all the carrot skins she peeled and the goats are loving them. 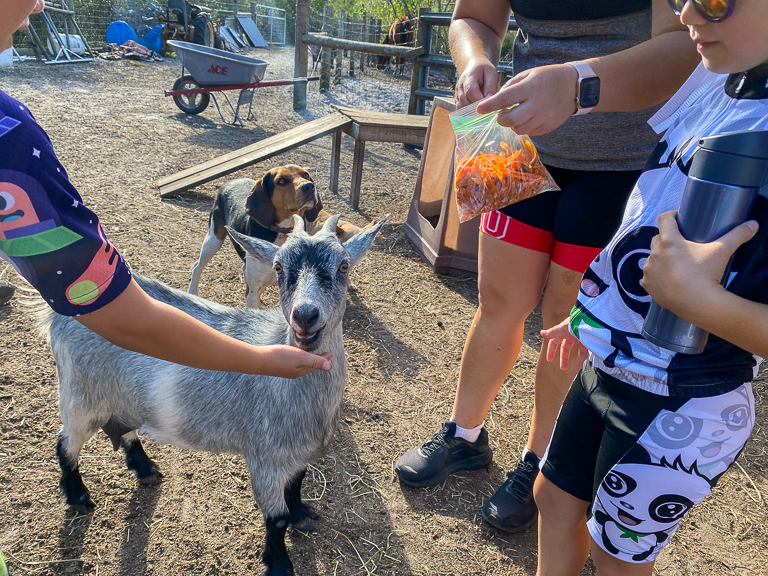 The babies are really starting to grow up! 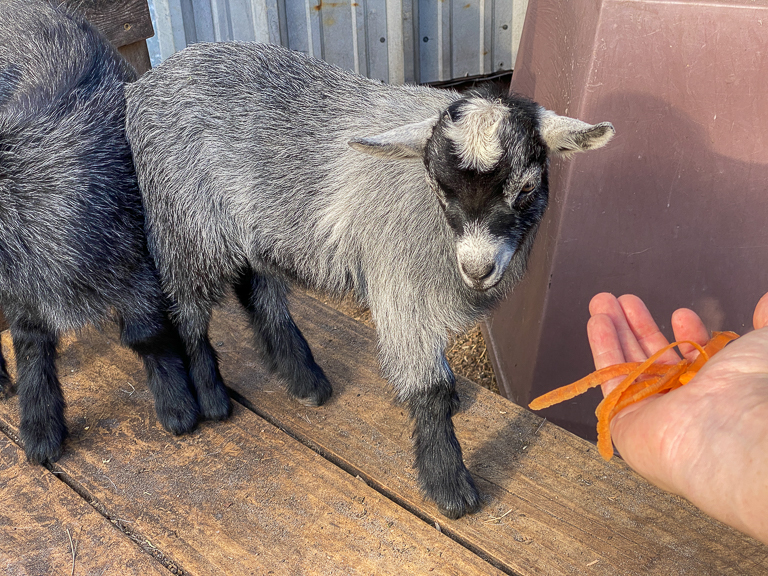 Can't forget about the bigger animals too. We've got a bag of carrots for the horses to munch on. 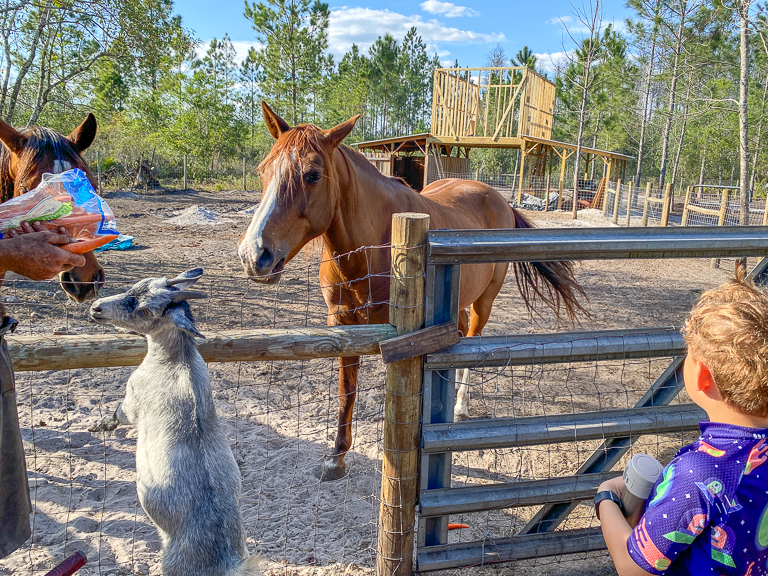 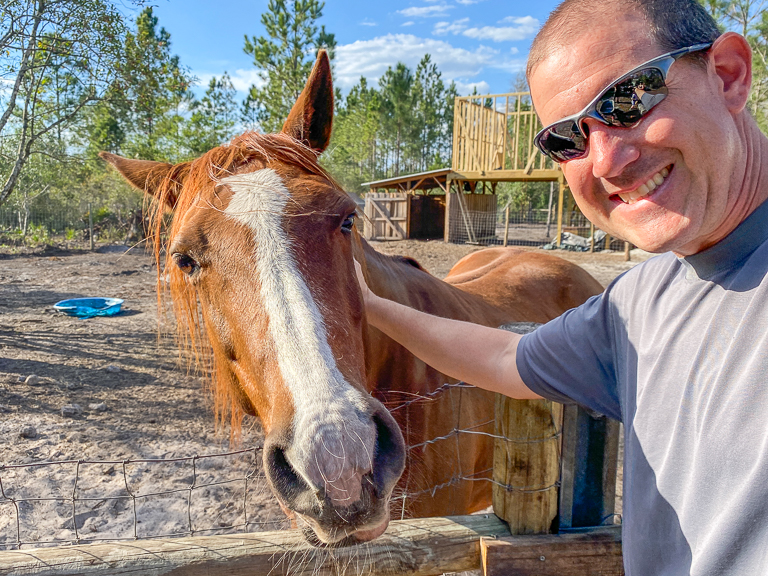 No treats for Sven today. Just lots of pets and attention. 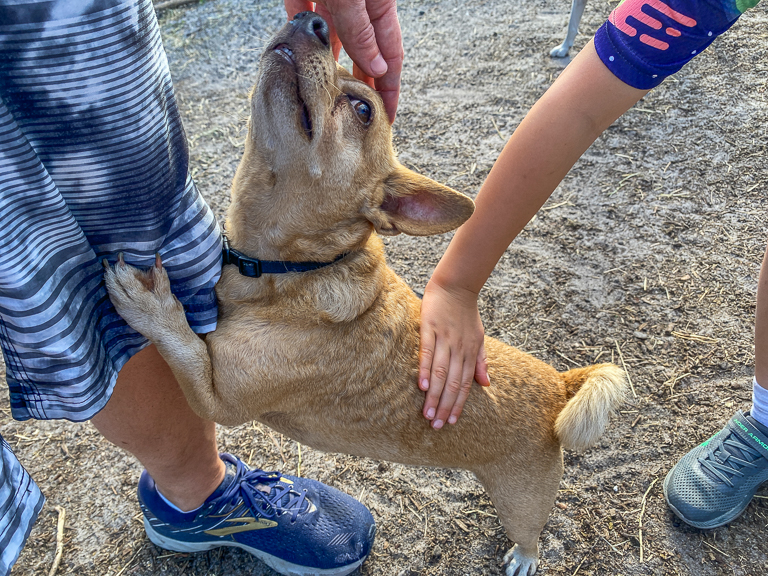 The kids wanted to figure out a way to "help" Henry. They volunteered to fill a bucket of water for him to give to the horses. They can drink quite a bit of water every day. 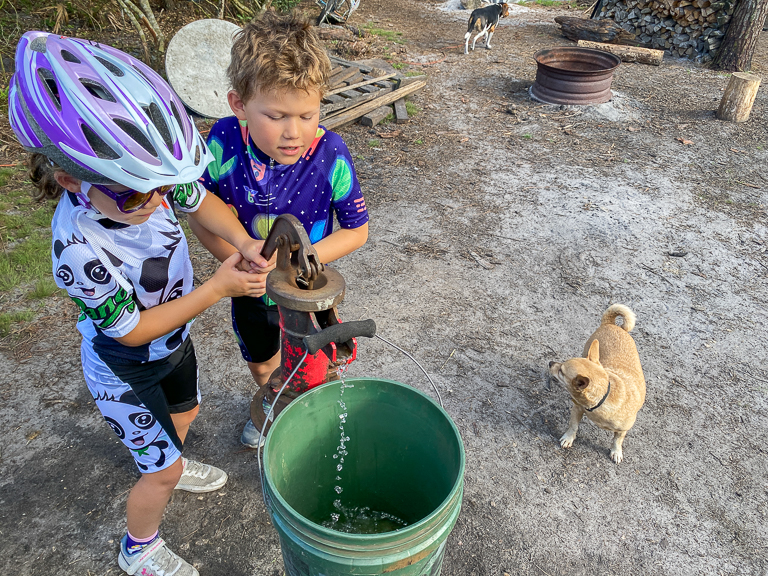 Saying goodbye to Henry, there's only a few more miles to go!
Beware Alligators. Like the one hanging out right behind that sign! Ian was a great gator spotter today, seeing them in places we don't usually find them. 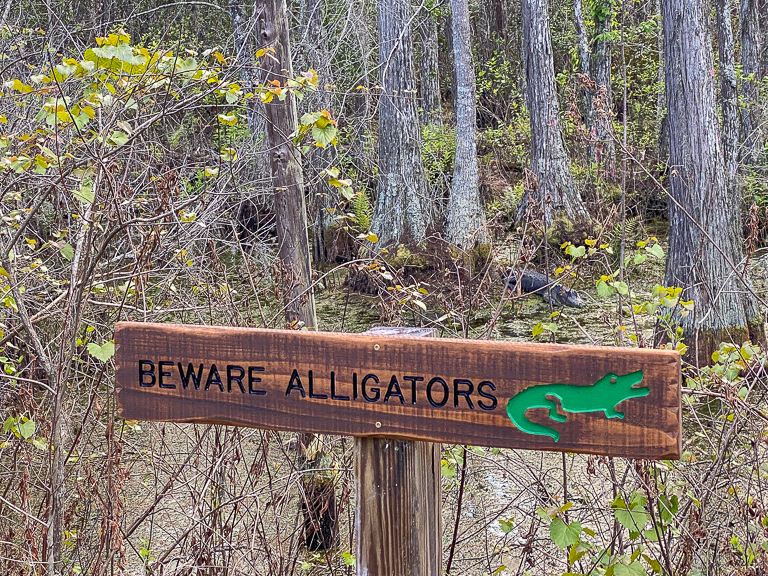 As we pulled in to the Green Pond trailhead, there was cheering and excitement all around. We did it! New record set! 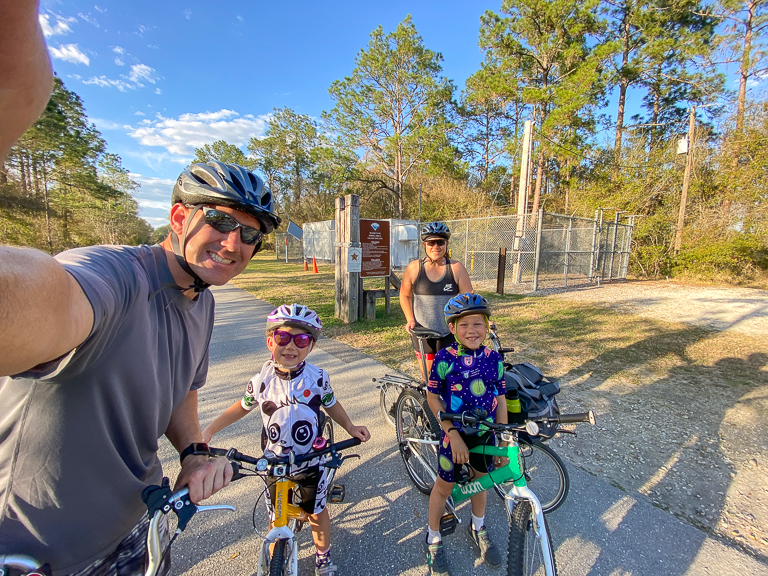 In the end, we did over 41 miles together. I never stopped my watch, so the 6 hours and 21 minutes includes all our rest breaks. Theresa also tracked it and saw that we had 4 hours and 10 minutes of actual moving time. 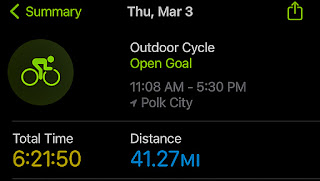 Our ride was flat and straight. Just one slight bend to the trail. Now though the kids are ready to push it even further. At the end of 40 miles they were both feeling really good. Ian was pushing to go even further, but it's starting to get late and we want to make sure we work ourselves up in increments. We'll get there though buddy. 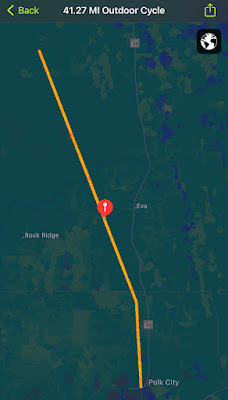 After our 30 mile bike ride, Ian wanted to celebrate with McDonalds. He asked back then if when they do 40 miles, could they celebrate with Taco Bell.
Well it's not Taco Bell, but they were just as excited. They both love Little Caesars. 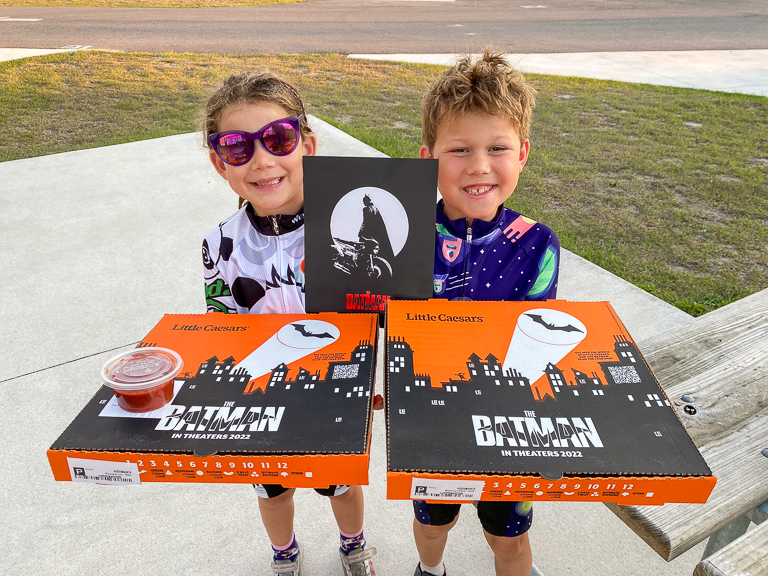 And despite giving them lots of snacks and filling meals on the trail, they are both famished! Each of them ate 4 slices of pizza, in addition to all the fruit and veg that Theresa put on their plates. They've got to build up that energy! The next long bike ride could be coming up soon and they want to be ready! 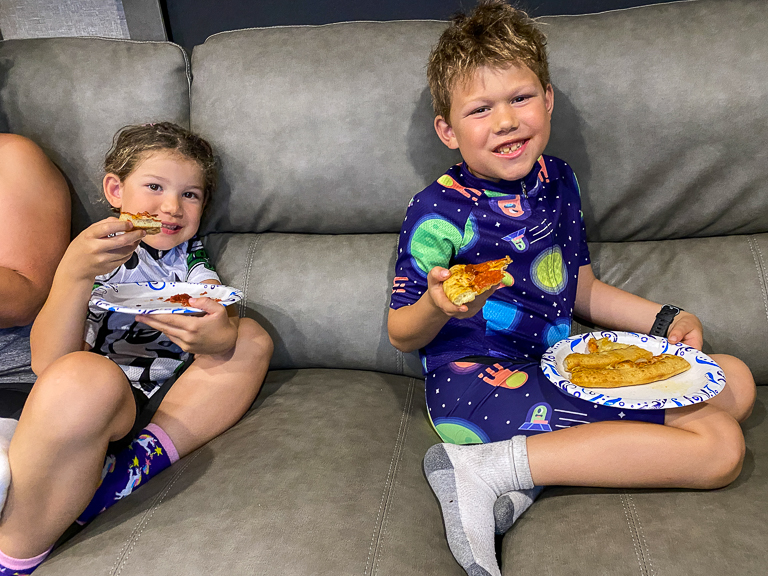