Spending a day biking and going to Disney World

Happy Thursday! Because we can set our own schedule with the kids' school, our typical off-days are Tuesday and Thursday. That means we can head out to the Van Fleet Trail a little earlier in the day and get a few miles in and still have time to do something else afterwards! 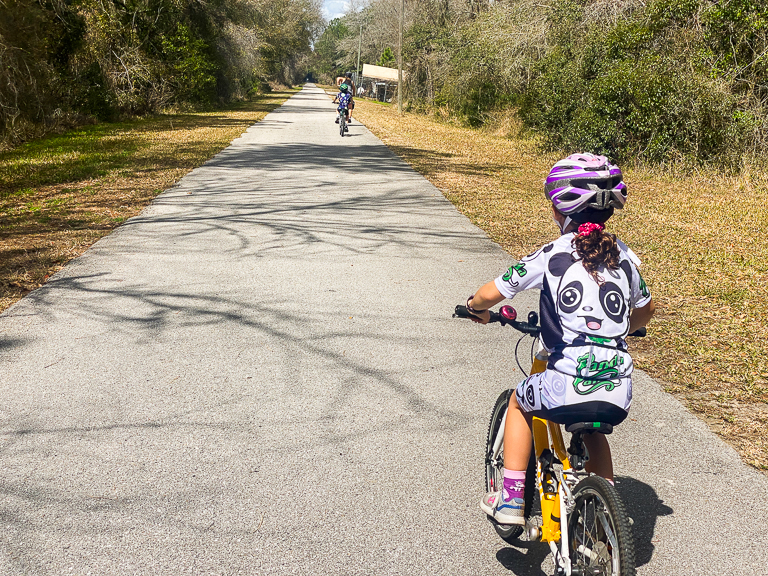 It's still exciting to see gators, especially the bigger ones. 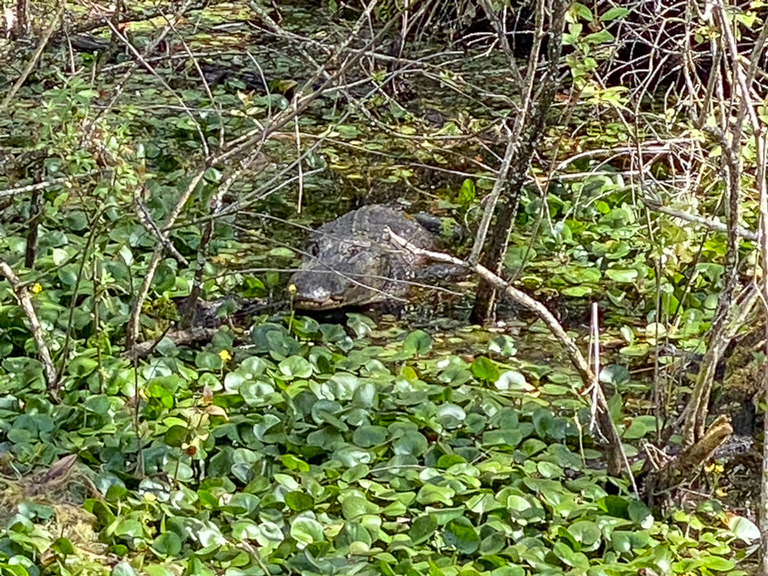 They just like to hang out by the bridges along the trail. 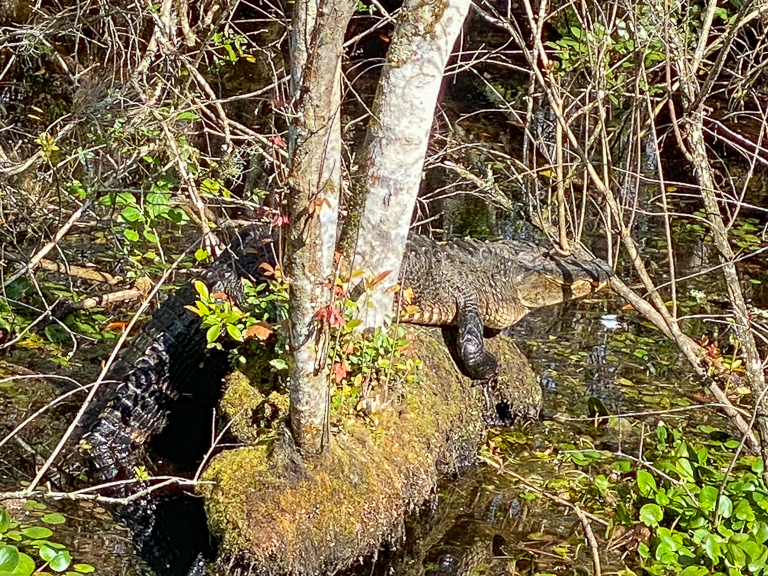 We also get to stop and see our friend Henry and all his animals. He seems to always have a bit of food in his pockets for the animals to munch on. Ian received a few horse nibbles before she finally got it into her mouth. 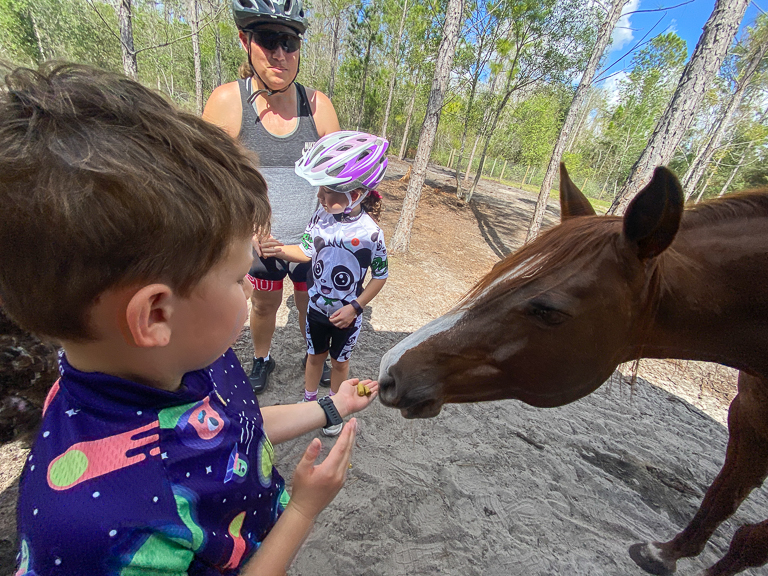 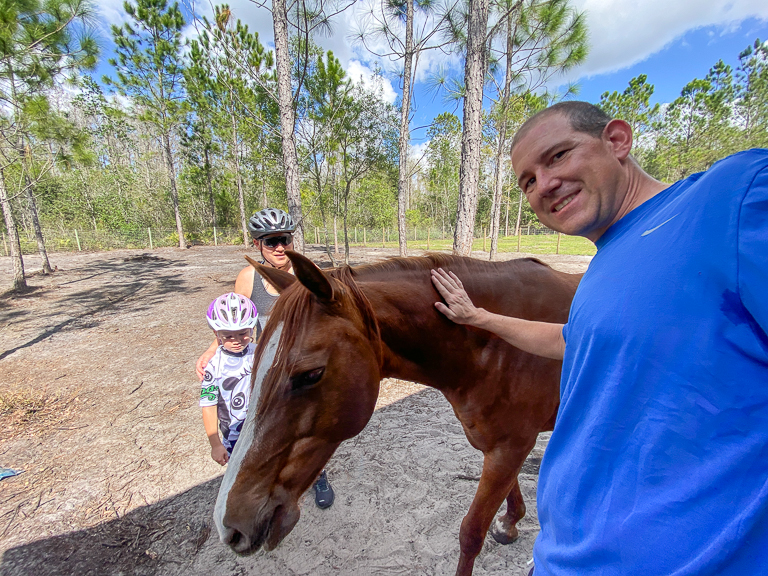 Didn't forget about you Lurch. 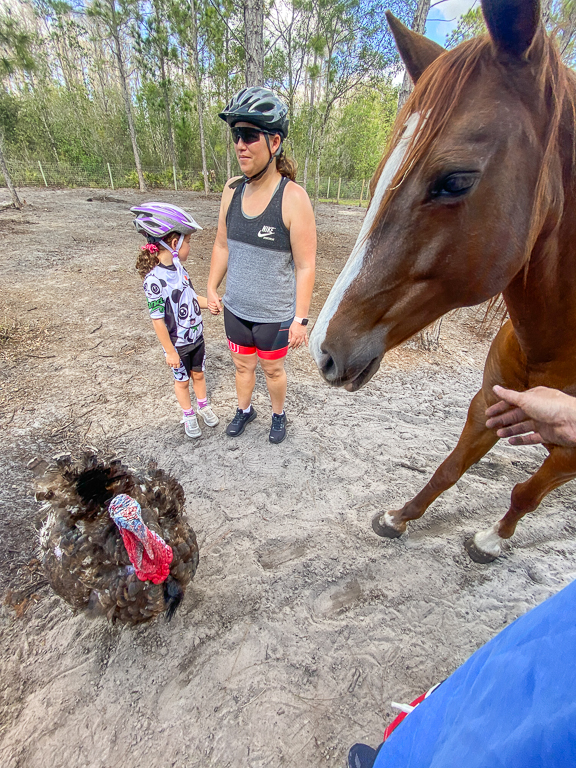 Henry was quick enough to catch a chicken today. Ian has tried, but they are too fast! 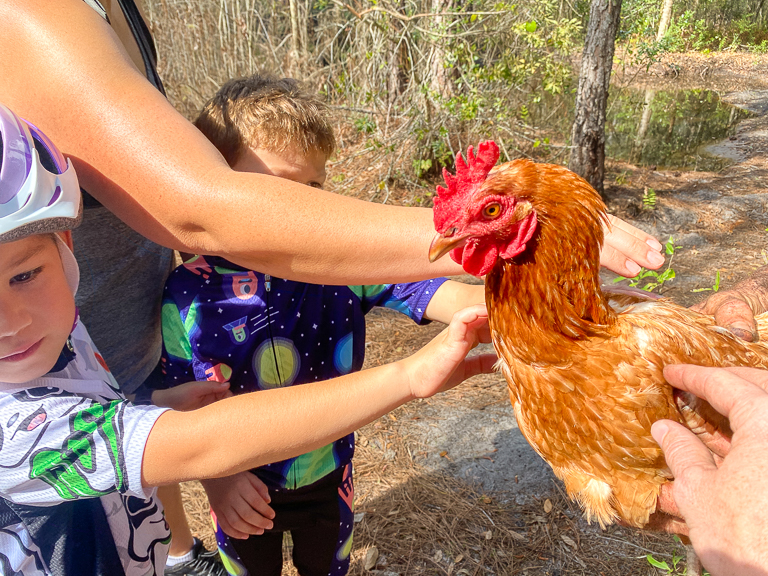 Without any food to feed the chickens in his pockets, he showed us that chickens actually love eating eggs too. He cracked a few on the pavers and the chickens swarmed it. 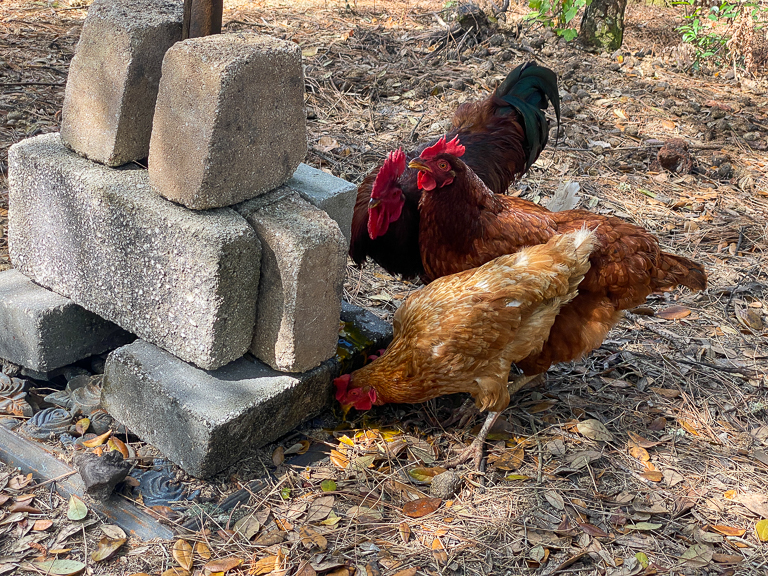 A little over 20 miles on the bike today! Nice job kids! What should we do next? 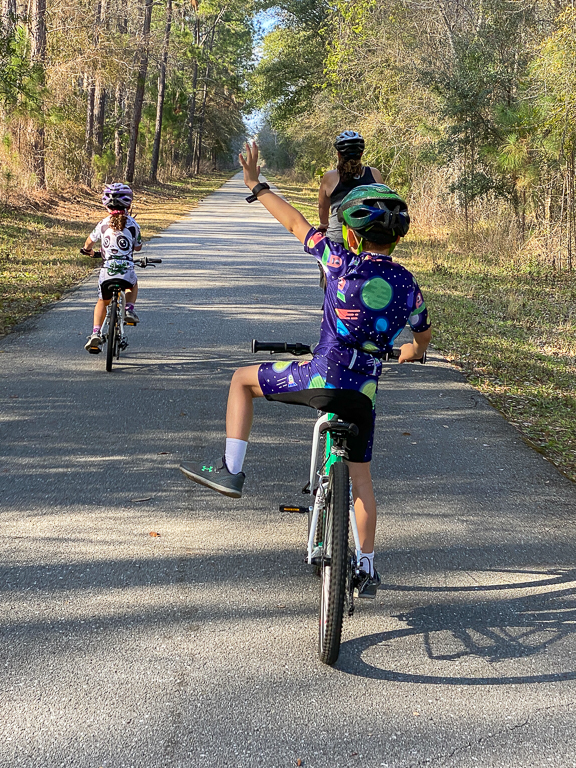 How about a visit to the Magic Kingdom? And the trams are running again! Getting to the Ticket and Transportation Center late in the day means parking far away from the monorails and taking a long walk. Usually we're all for walking to get in mileage, but the novelty of taking the trams again was too much to resist. 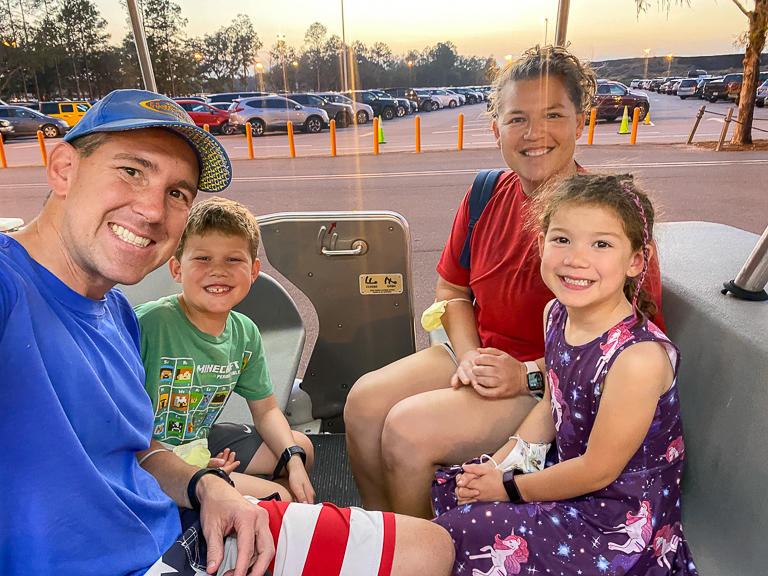 Arriving at 6:30pm to the parking lot, at 7pm we had made it into the parks an over to one of the rides that is high on our list of riding again. And it's back from refurbishment! Splash Mountain! The line showed 70 minutes, but with fireworks starting in 60 minutes we were hoping that time was inflated. 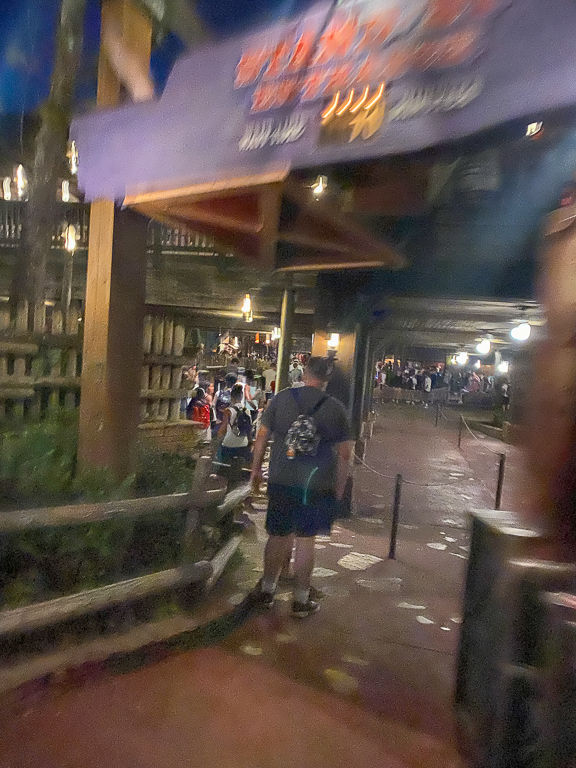 Eh... It wasn't inflated. We shuffled our way through the line with all the rest of the guests wanting to go on this ride again. 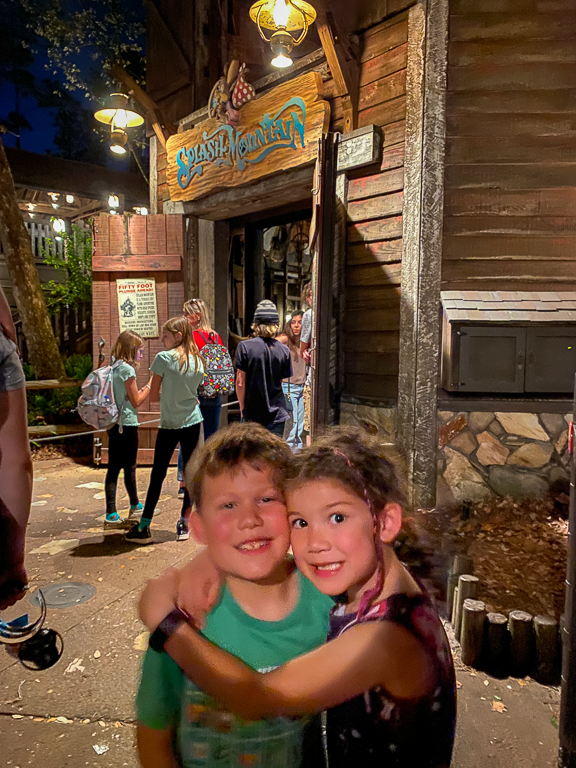 At 8:02, we had made it onto the ride! I was surprised that even Theresa rode with us! 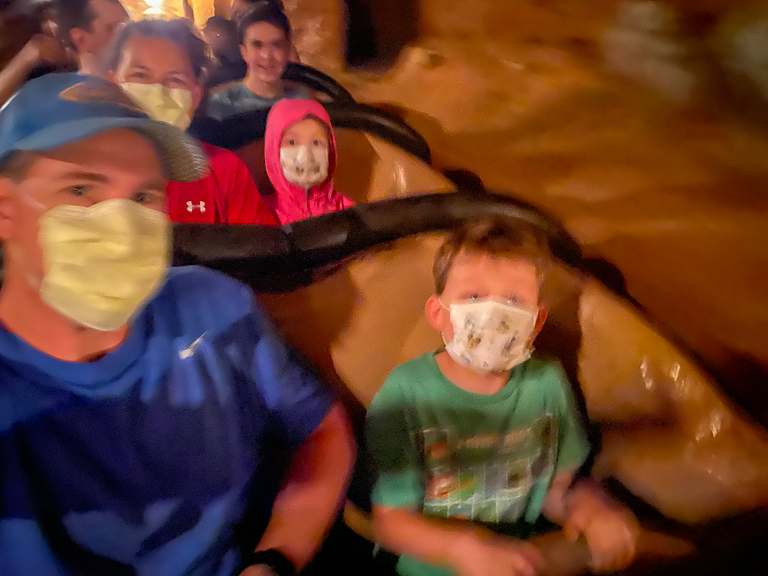 And the best part about going on rides around 8pm is that fireworks are going off at the same time! 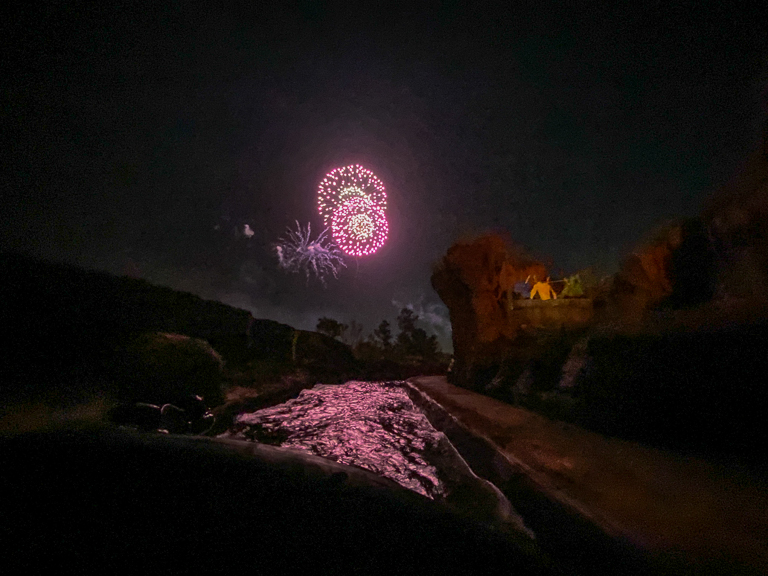 I love going on rides during fireworks. 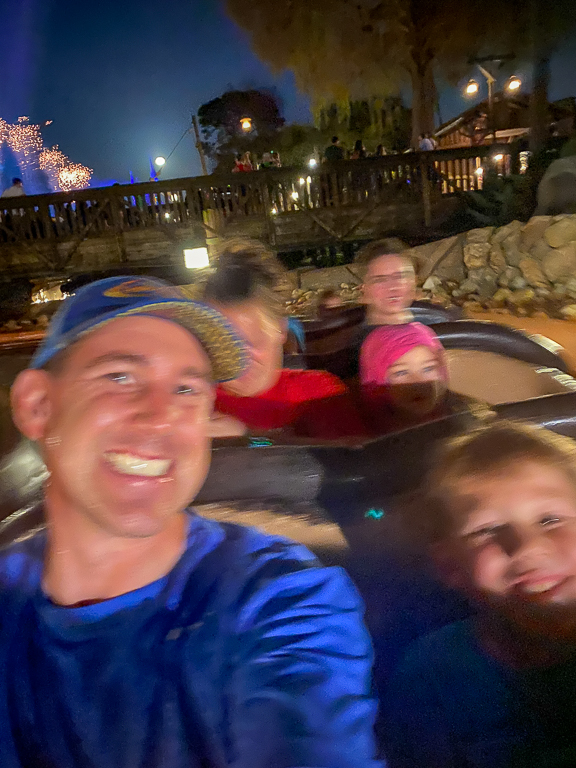 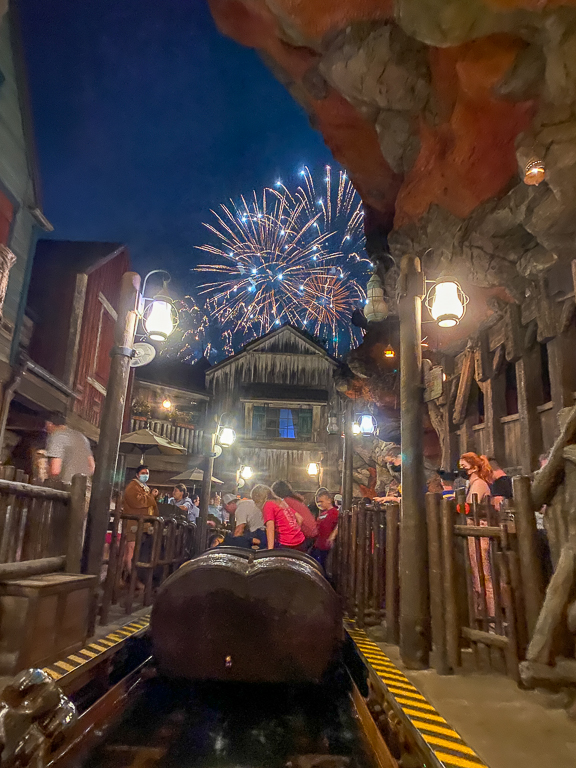 You can see how much fun everyone is having, especially during the big drop! 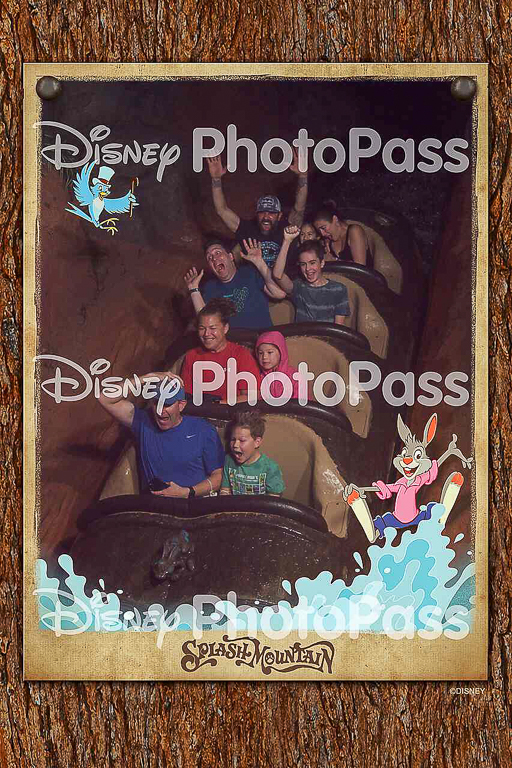 We had so much fun, and the line was so short because everyone was watching fireworks, that we walked right back on a second time! The kids rode together in the front row while Theresa and I got a row to ourselves. 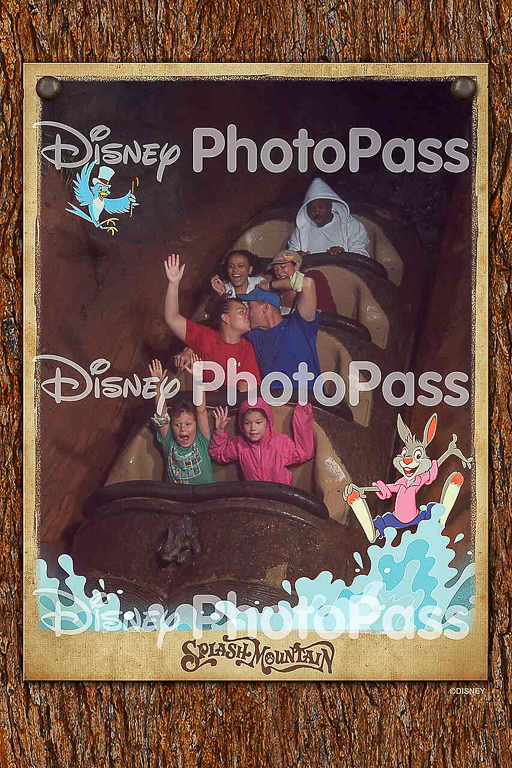 Everyone got just a little bit wet on the ride, especially after the second round. Well, this is what we signed up for isn't it. 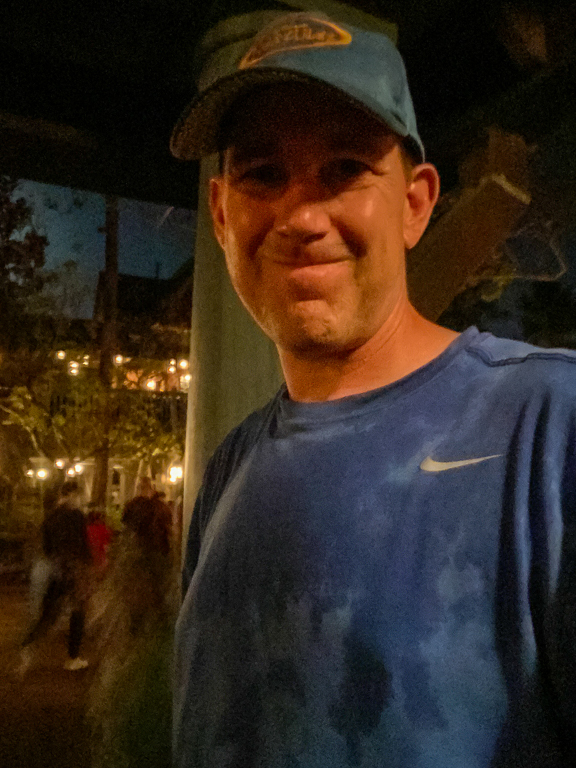 You know, after a bike ride this morning, and some walking in the evening, I think a treat is in order. A Dole Whip float sounds perfect! 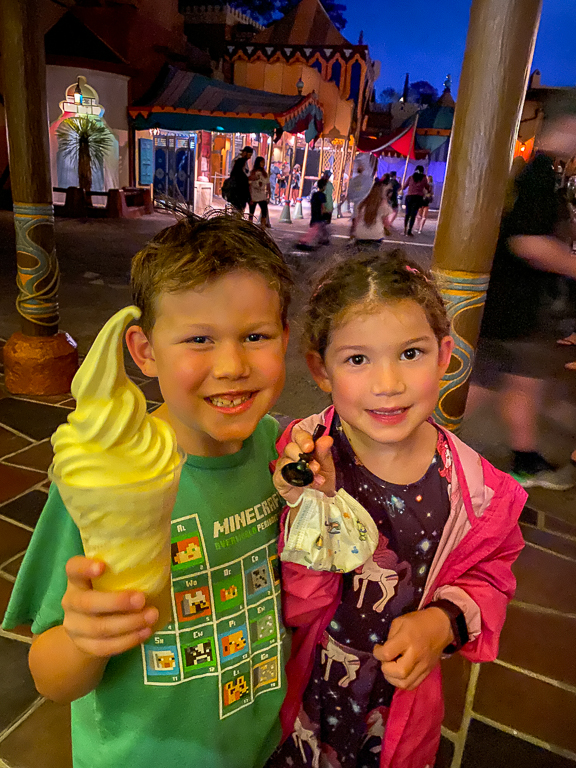 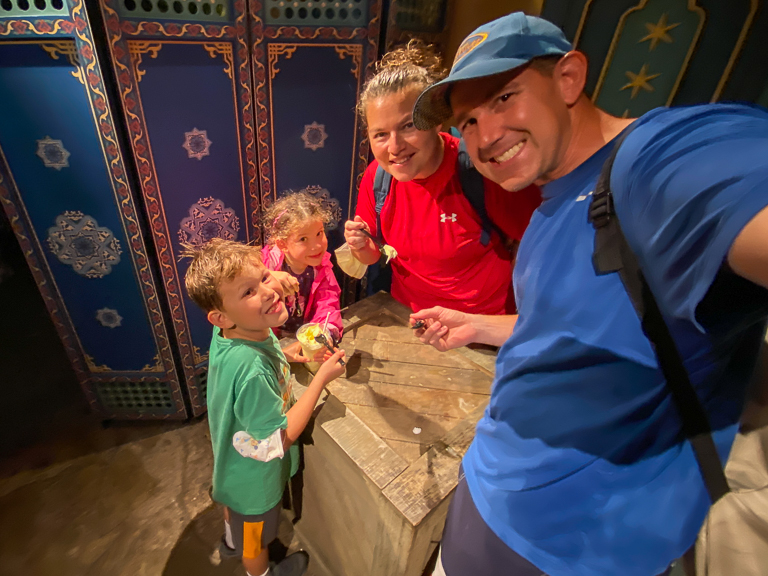 One of Alli's focus rides before we leave Florida is Buzz Lightyear's Space Ranger Spin. Since Ian got to ride one of his, Splash Mountain, we hopped in a short 15 minute line to give Alli a chance for hers. 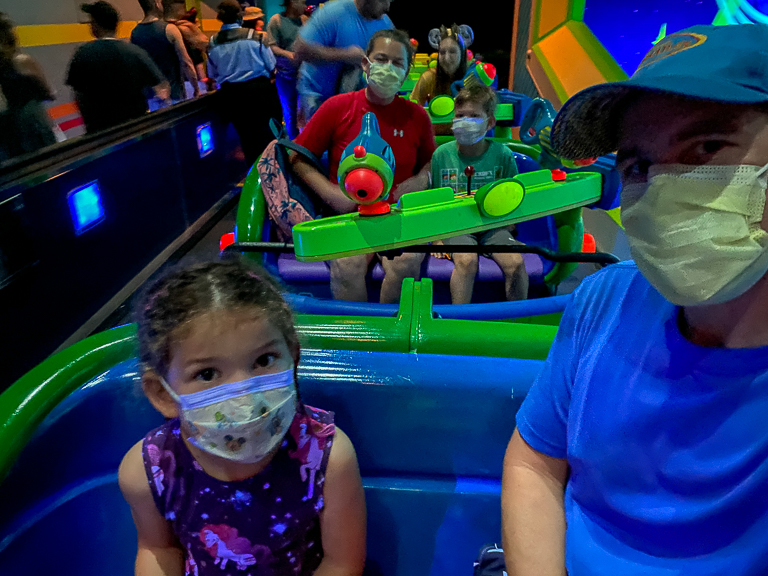 It just reinforces that Disneyland, with its removable blasters and targets with clear point values is superior to the Magic Kingdom version with its fixed cannons and targets that all look the same. 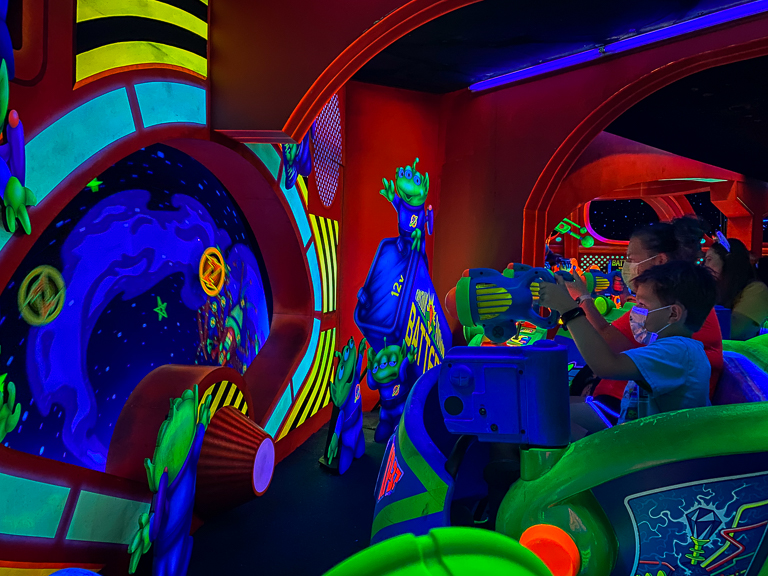 They do show a nice clear picture though when your on-ride photo is taken. 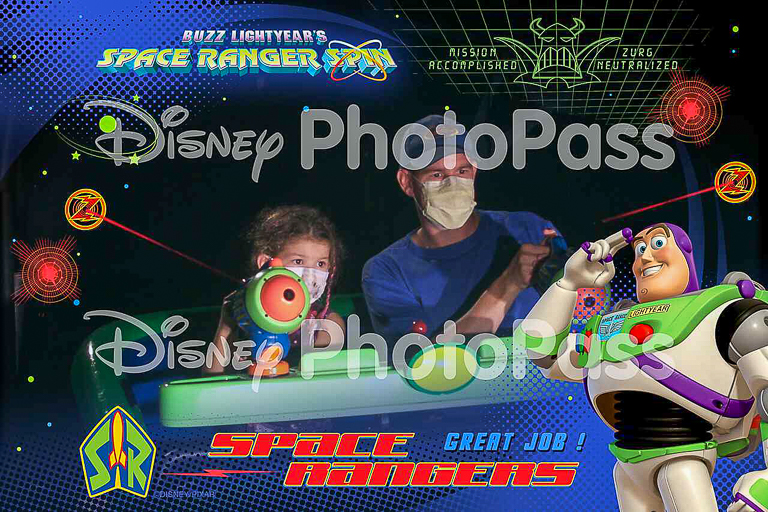 Your score isn't on that picture though, so you don't know how well you did. 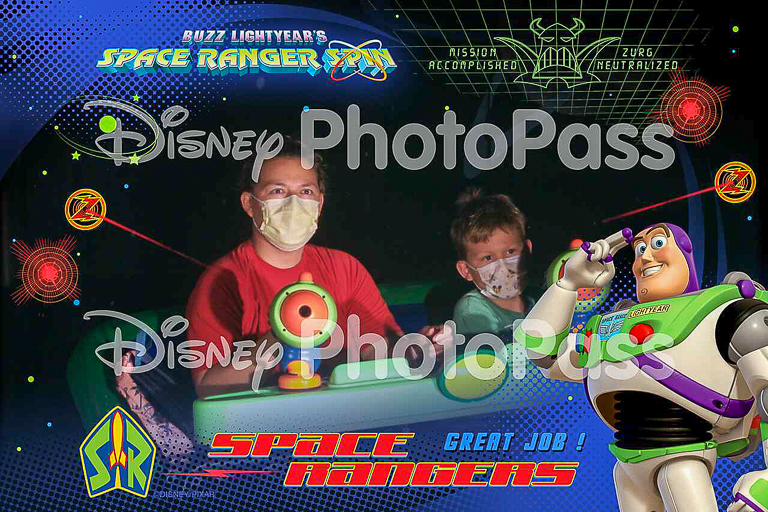 There's 15 minutes before the park closes and only time for a couple more rides. Can you believe Theresa is riding with us on the teacups? The kids did their best to hold our cup steady and didn't go along with my idea to spin it really fast with 15 seconds left. 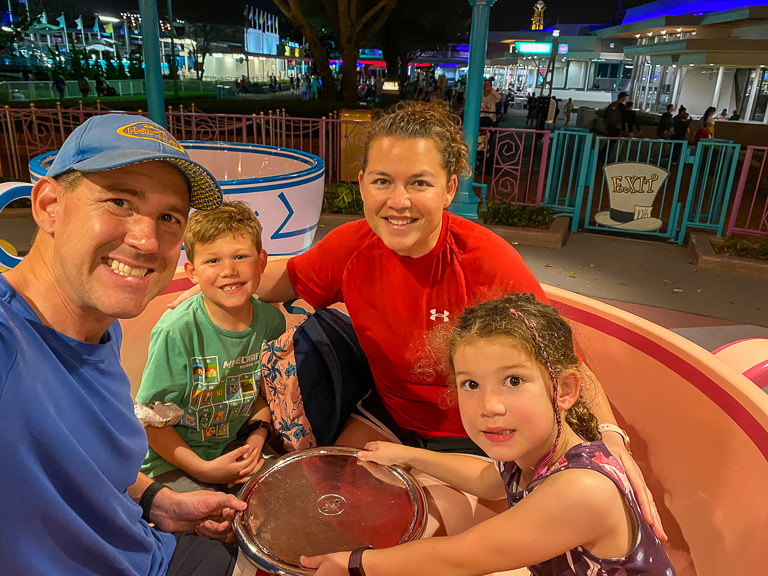 A few minutes before the 10pm closing time, we hopping in the line for Theresa's favorite ride. The Seven Dwarves Mine Train! 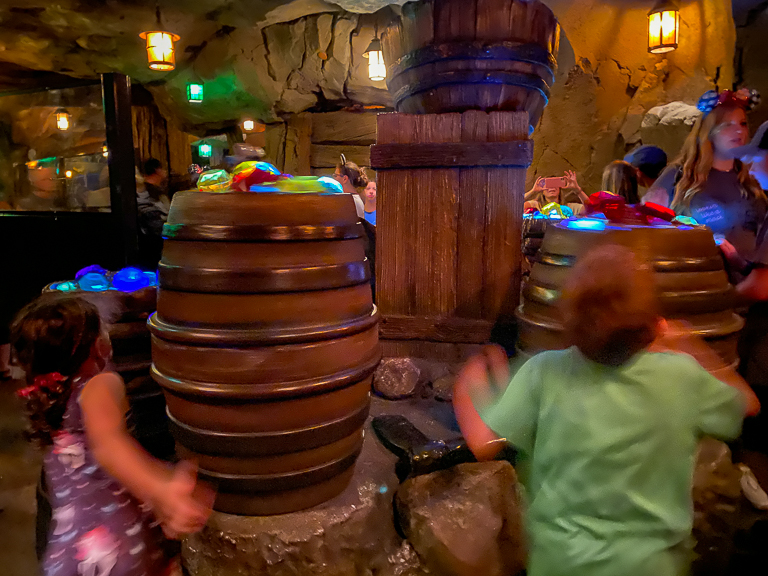 Actually I think it's a lot of our favorite ride here. At least until Tron opens up maybe. 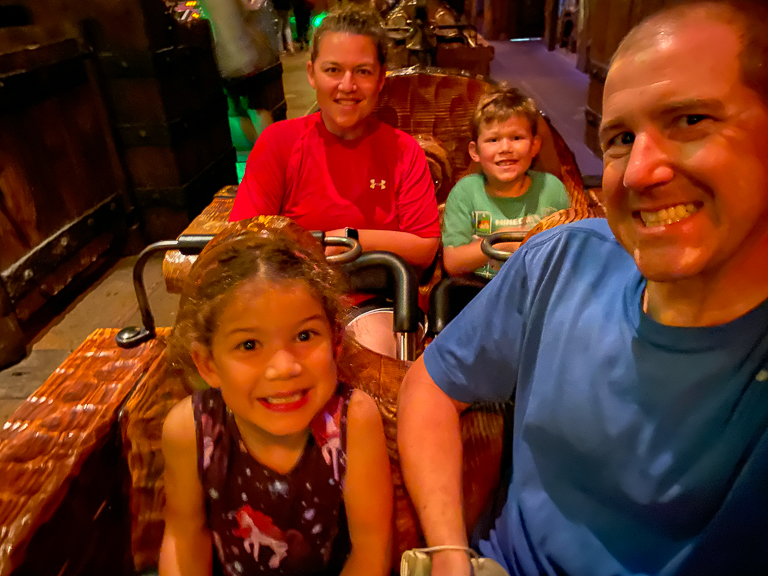 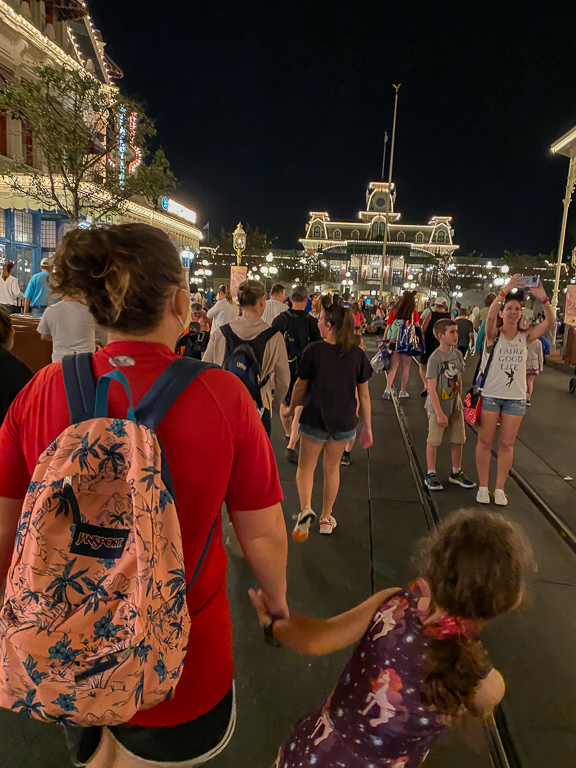 This time, instead of walking to the parking lot, we took the Resort Monorail, and were treated to the nighttime light display, the Electric Water Pageant. It was a great end to a fun day. 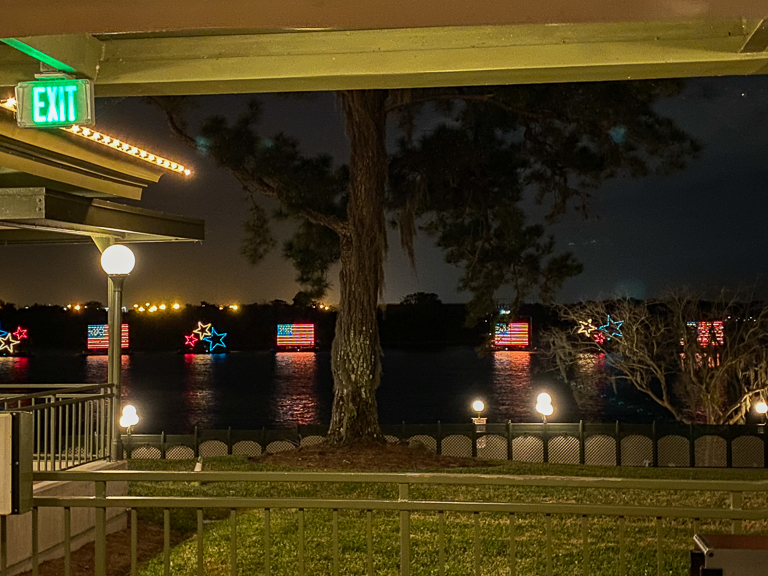