For the Pasadena Chalk Festival, the only thing they really ask of the artists (besides participating on the day of) is to donate a painted canvas for them to auction off during the festival.

Ruston has made a miniature recreation of our big mural, and I love that he's used a circular canvas! Artists can choose any subject matter for their canvas. Some choose to do something similar to their chalk mural. Others go for something completely different. 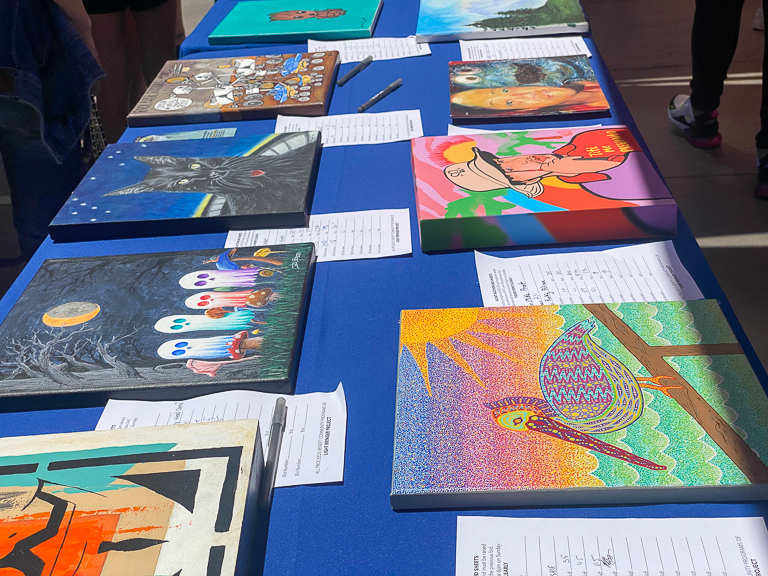 And the Light Bringer organization gives you a 1' x 1' canvas for free, but some people choose to do their own. Shuji Nishimura's photo-realistic painting of Salvador Dali has had so many bids it needs a second sheet, and it's up to $800! Captain. Captain Jack Sparrow. I had a friend who would love this. She's a big fan of Johnny Depp. 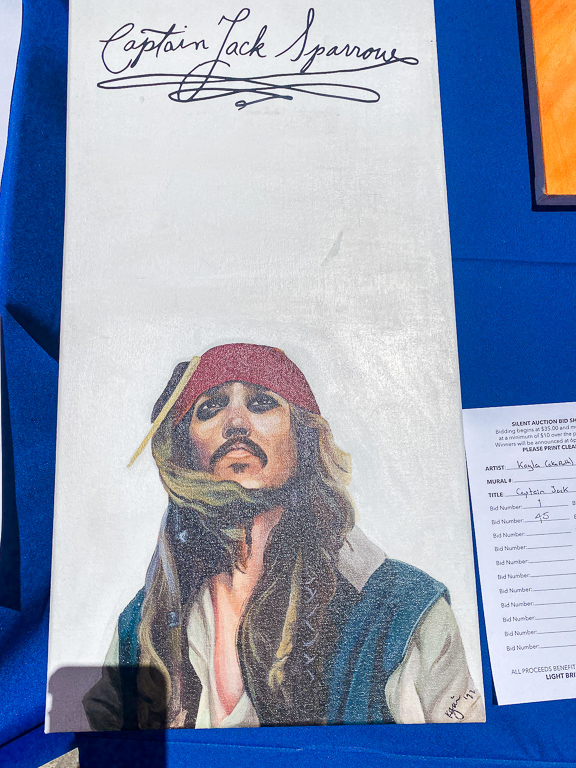 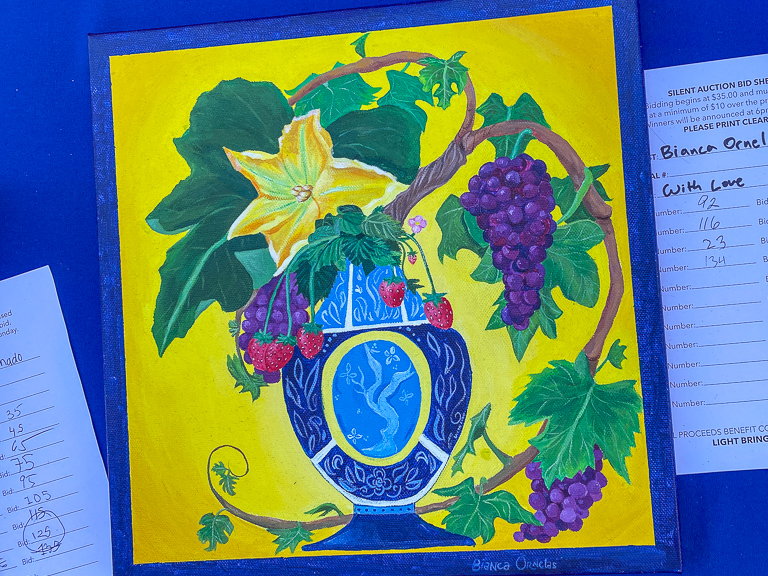 Whenever we'd get up and take a walk, it was fun to go over and see the status of Ruston's painting. See how the bids are going and if it's any higher than the last time we looked. The previous record for one of our paintings was $135! When Ruston saw how much the bid was up to, he was pretty excited! $150!
Spongebob's House.
I didn't get a very good picture of it, but I loved that Jazlyn Jacobo, who did the chalk mural of Carl and Ellie from Up as kids, did a painting of Carl and Ellie as adults! 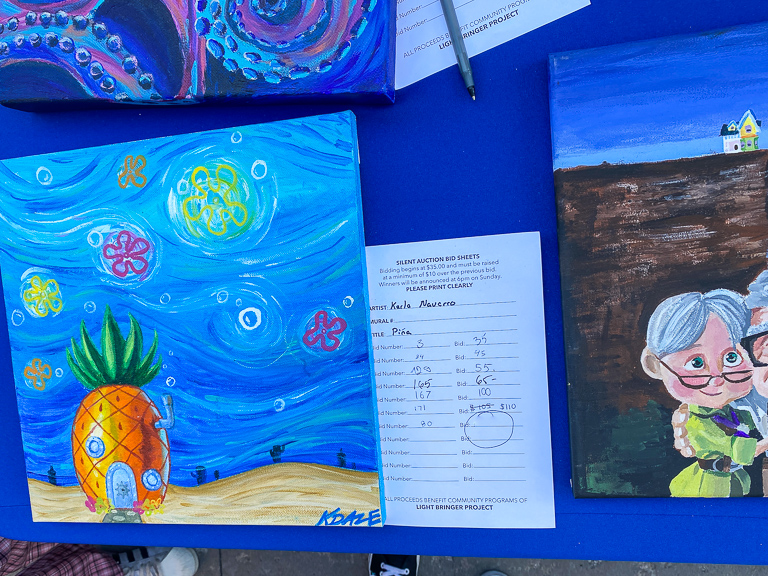 It was pretty crazy at 6pm as people were rushing to put in last minute bids. On some of the really popular paintings, bidding sheets were passed back and forth as people upped their bids right up until the bid sheets were collected.
And what did Ruston's painting sell for this year? $200! Our biggest earner for the Light Bringer Project yet! Congratulations! 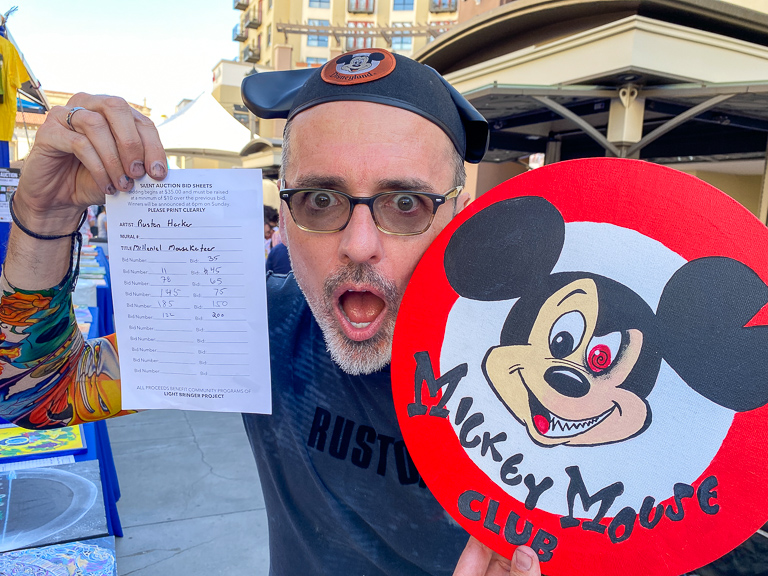 It has been a long day. We sat and listed to the live bands that play at the festival all the way up until awards time. 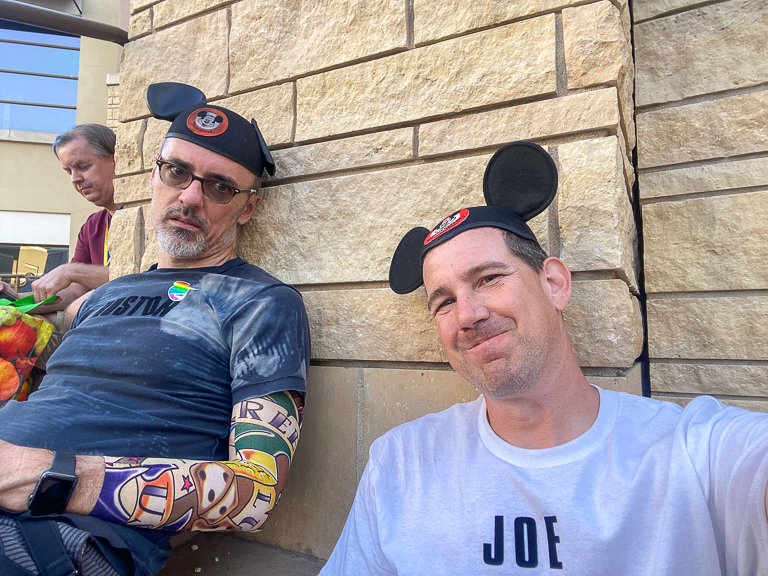 Time for the Artist Awards! And look who it is! Tom Coston! After a few negative Covid tests, he's here! He didn't miss the festival this year after all! 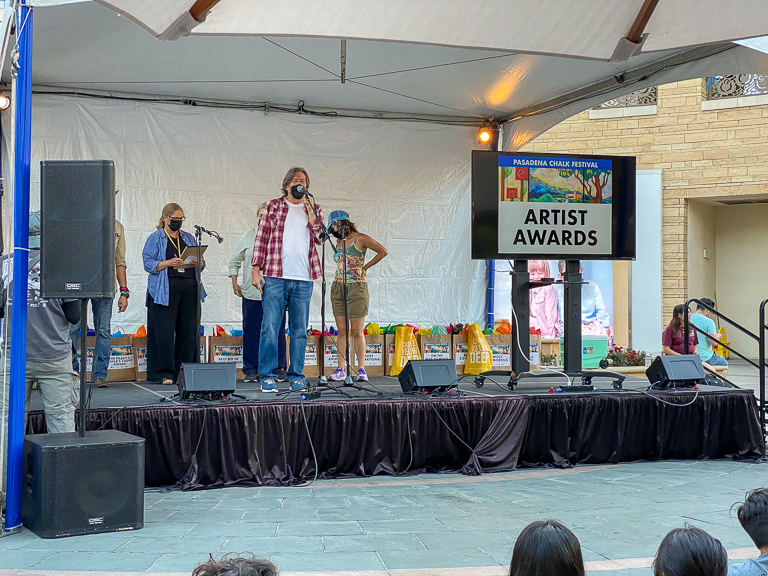 The prizes for the winners are all donated by local businesses. Thank you! In past years, the general public was able to vote for their favorite mural/artist via text message. Sadly that wasn't working this year, giving "Sorry we didn't understand" messages back no matter what was sent. The organizers were ready though with paper ballots!
This year, the People's Choice is Shelsea Flores! Congratulations! 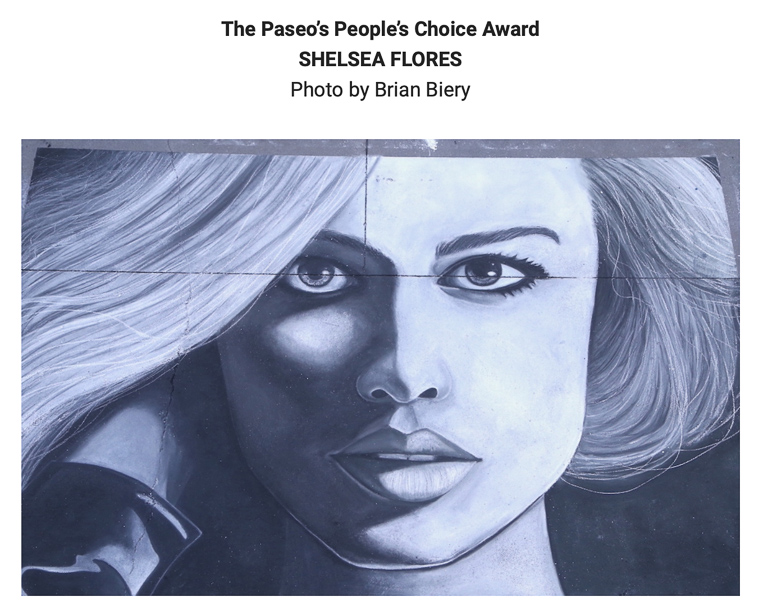 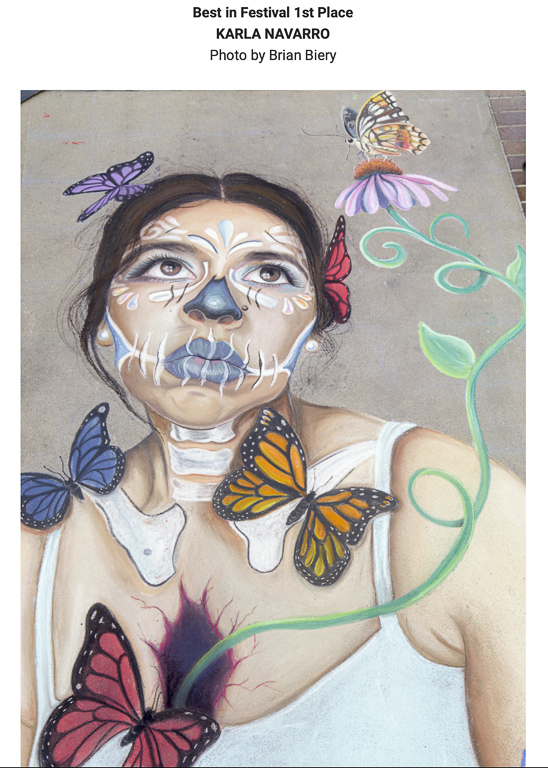 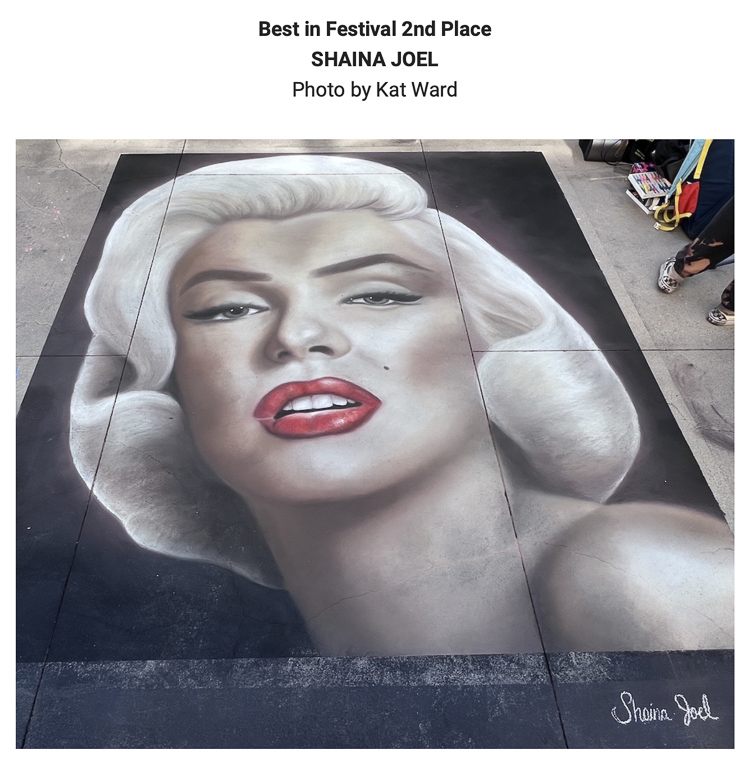 And Arlou Somo in third place! 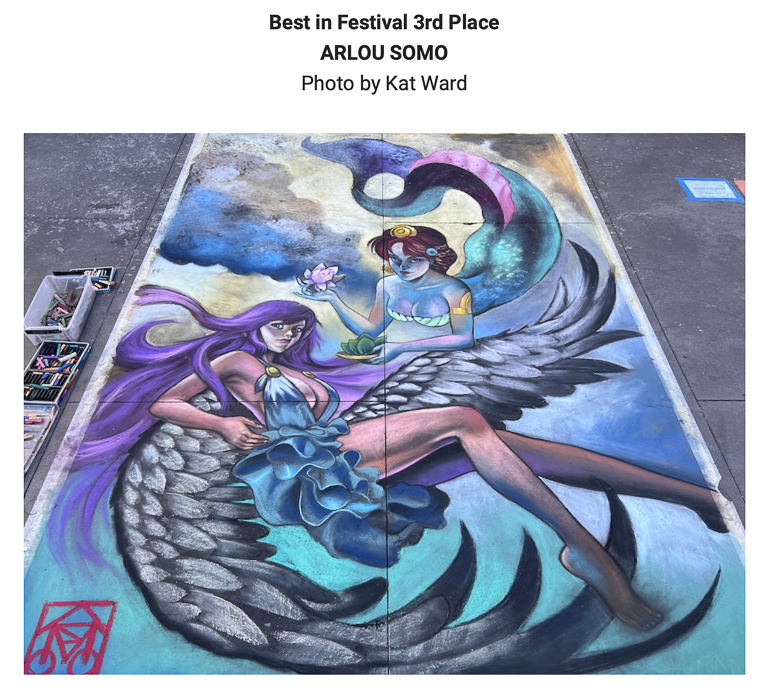 The best of the silent auction goes to the two-sided canvas by Leo Aguirre. In the end, it went for $1000! 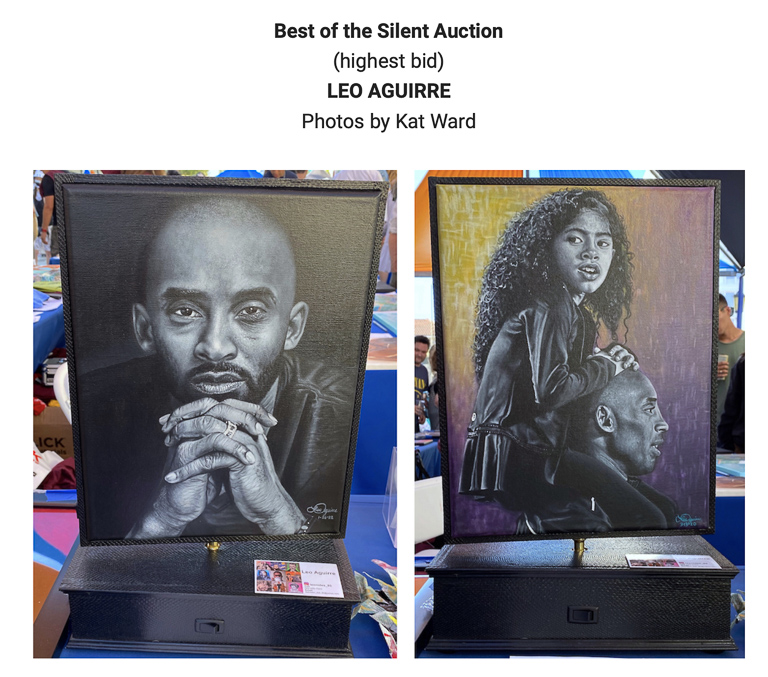 The Most Inspirational went to 14 year old Hazel Vukojevich for his mural titled "Ukrainian Spirit". 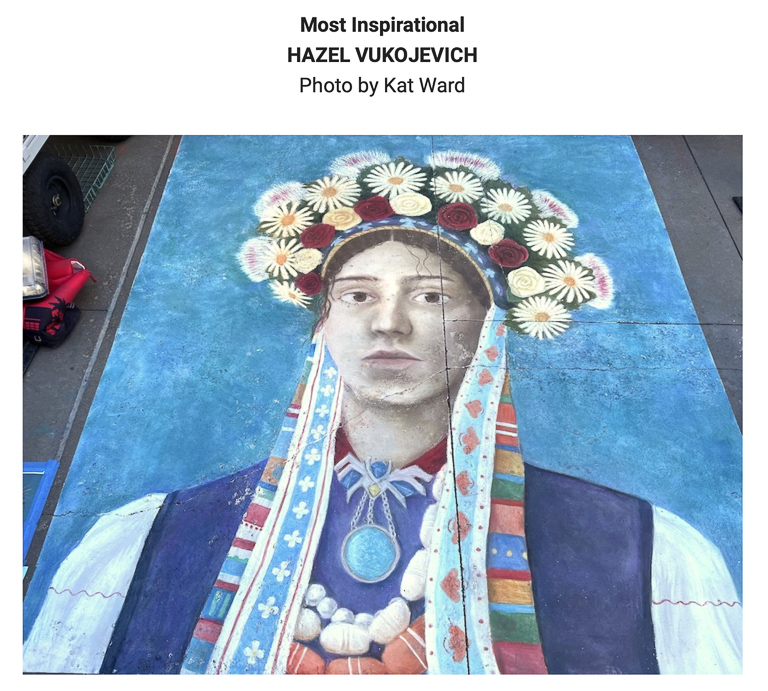 The Chalk of Fame, by the former ArcLight Cinemas, features murals related to movies. Samantha Villalobos' recreation of the poster from Turning Red won Best in Chalk of Fame. 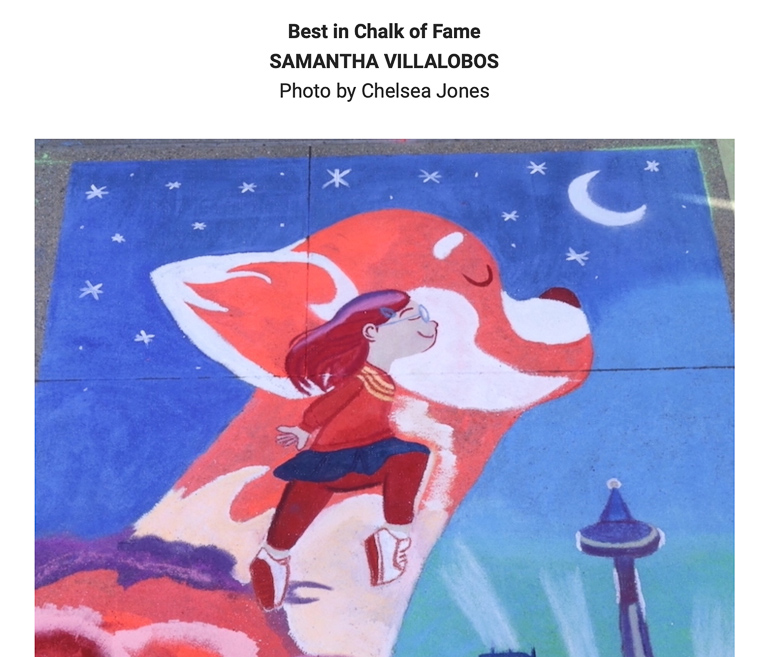 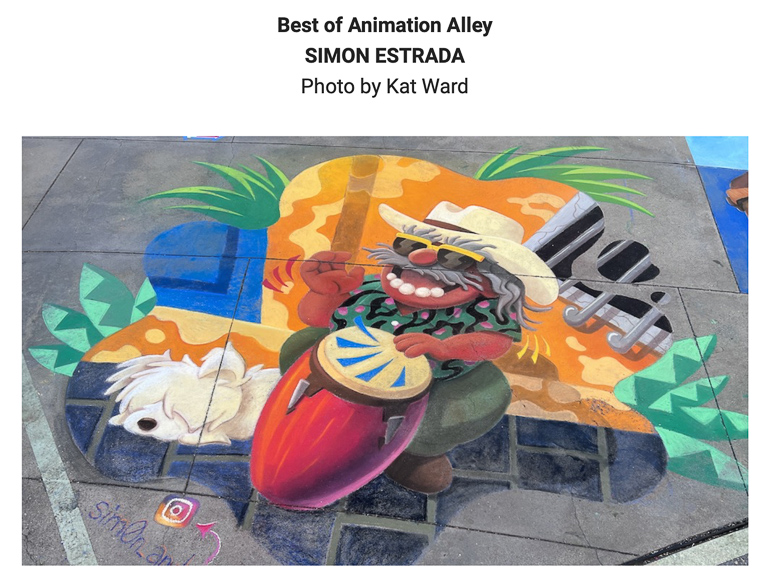 I loved Gus Moran's rendition of Van Gogh's self portrait and Girl with a Pearl Earring. And so did a lot of other people! It won Best Rendition of a Masterpiece! 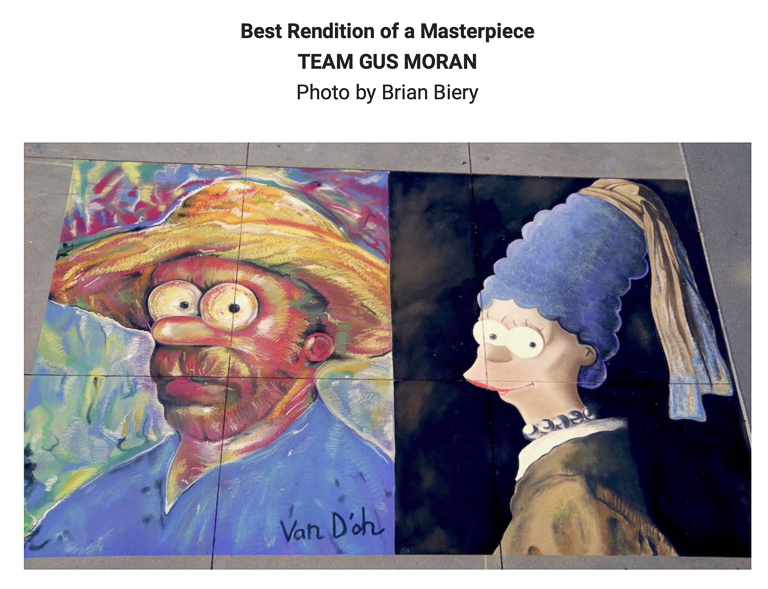 Most Humorous went to Ester Petschar for her mural of Paddington Bear having tea with the Queen. 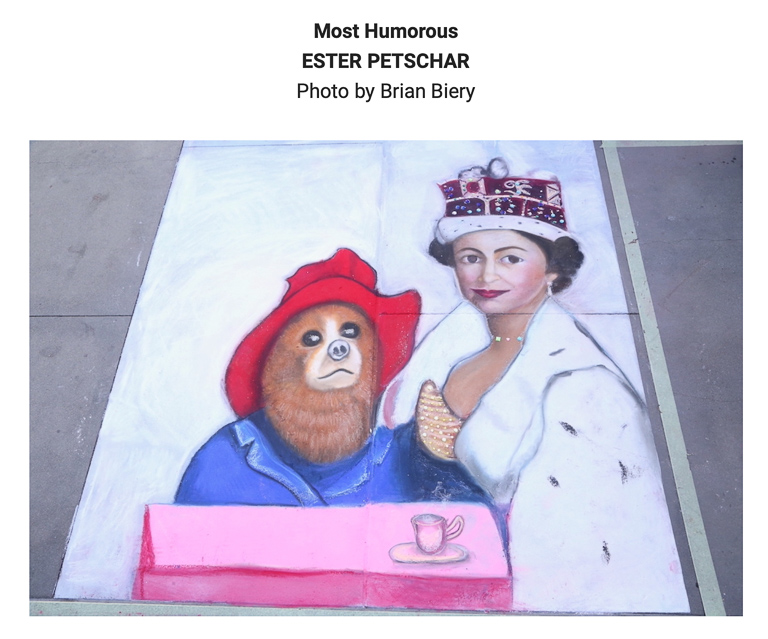 On the Way to MOCA (Museum of Contemporary Art), goes to Grasiela Rodriguez. This mural is based on one of the paintings from the Portrait Hallway inside Disney's Haunted Mansion. In the painting, a reclining woman is shown on a sofa, but when the lightning flashes in the hallway, she changes into a black panther. In 2005, the effect inside the mansion was changed, and instead of being morphed into a darker figure, the image had to be something lighter than the original. That's why today, when you see this inside the Haunted Mansion, the reclining woman changes into a white tiger instead of a black panther. 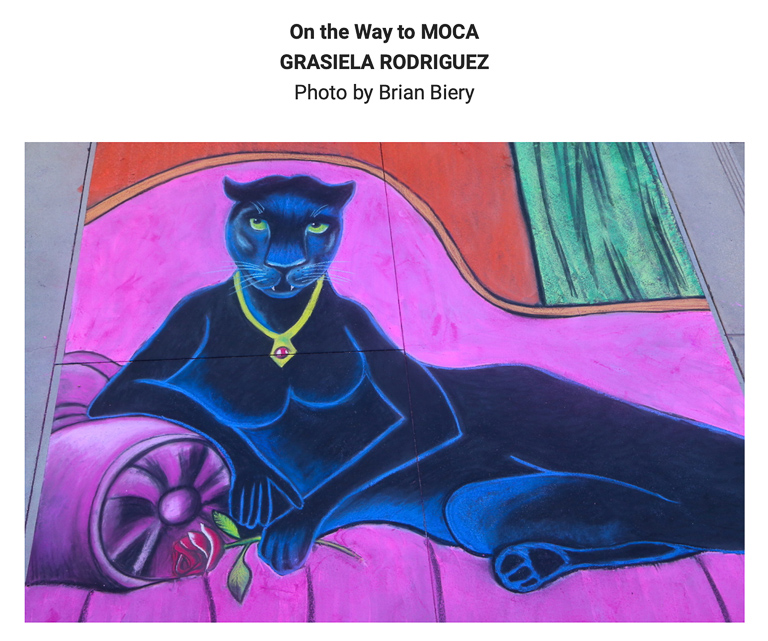 Jaslie Ulloa has been participating in the chalk festival for a few years now and was so surprised when she won! She was still busily working on putting the finishing touches on her mural and had to be notified to come over and accept her award. Congratulations on Best Technique! 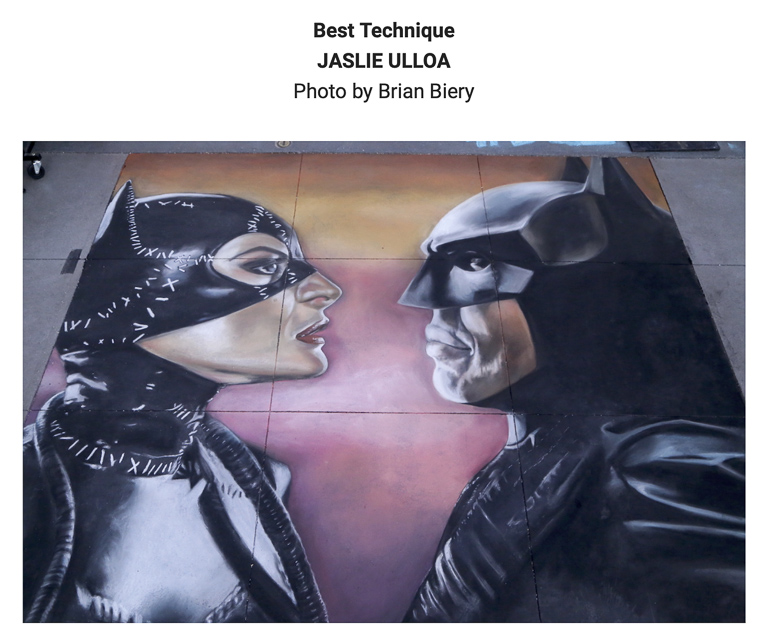 Best Use of Color went to Monica Mortimer and these pictures don't do it justice. The golds and oranges popped! 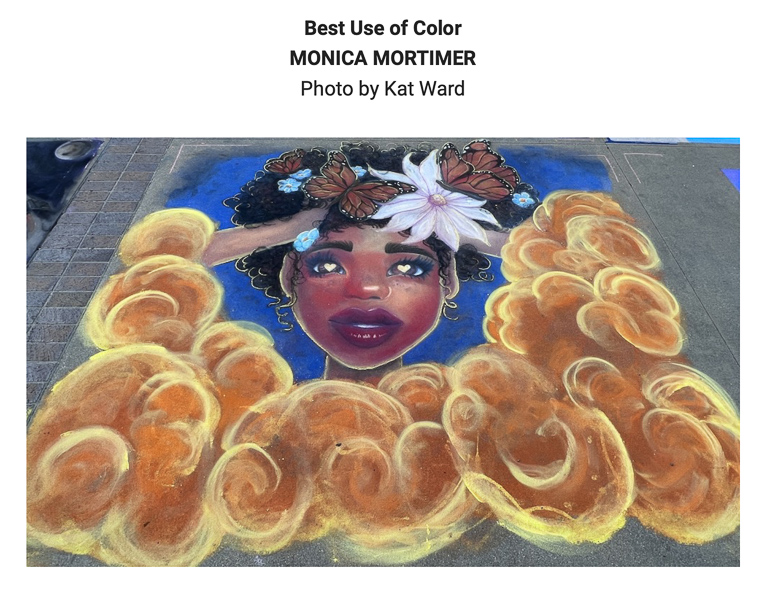 The group of friends known as PMLAB continues to amaze everyone with their 3D creations. I love all the details they bring in, from the real props, to the chalk items "scattered around". Like that ICEE cup drawn out of chalk, sitting on top of an Amazon smile box, but turned upside down for a grouch.  Congratulations on winning Best 3-D Effect! 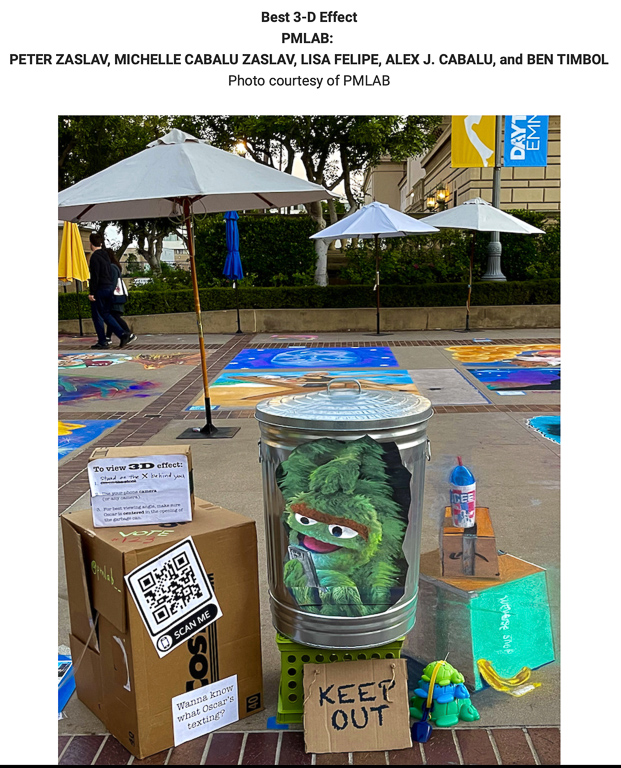 No awards for us this year, but we had a lot of fun participating, and we met a lot of old friends and made a few new ones! We had a fun year! 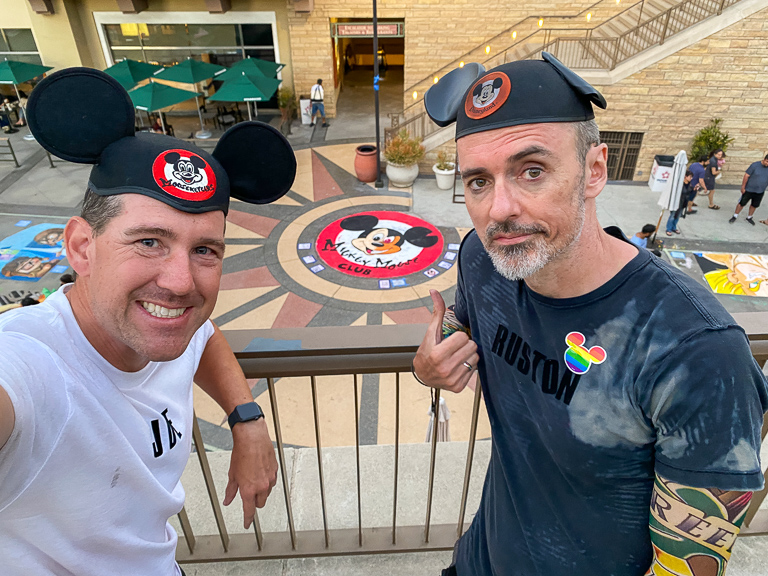 I also liked seeing the others had posted on social media with our mural. How cute! 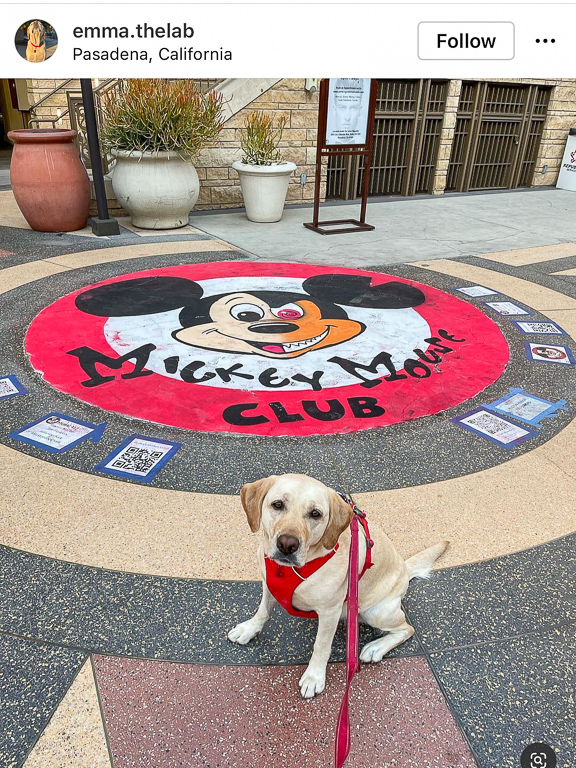 Someone caught us working on Mick Mouse. 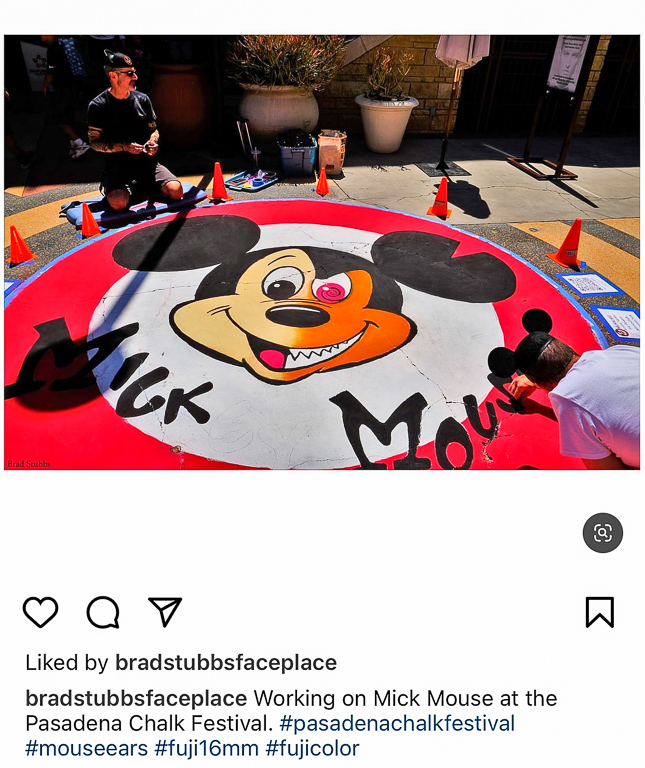 And it was fun to see what others posted on YouTube.

An email from the organizers after the event. I'm looking forward to next year! I hope to be able to make it back for the Pasadena Chalk Festival's 30th Anniversary! 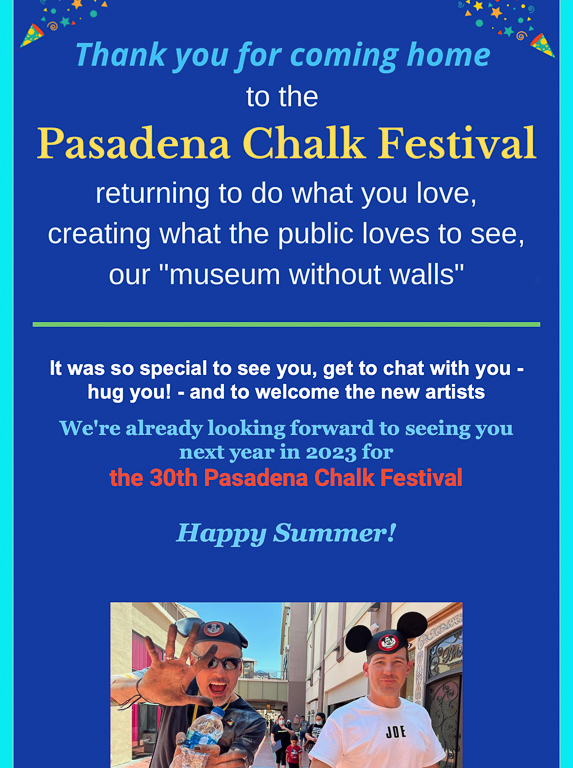