Catching up on some older stories.

It's summertime and it's nearly Fathers Day! You know what that means! It's time for the Pasadena Chalk Festival! All the way back in 2011, Ruston invited us up to Pasadena to experience it. In 2015, Ruston and I decided to stop being observers and start being participants! Because there's two of us, and we each have different ideas, we go back and forth year to year to decide what chalk mural we're going to do. This year it's Ruston's turn! 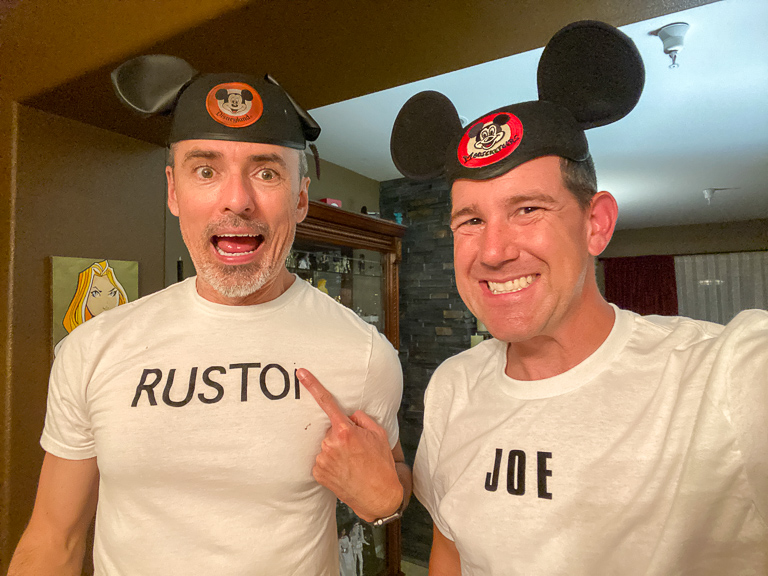 For all the years up to this point, we've drawn our mural in the main thoroughfare, but there's one section that Ruston has always had his eye on. You see, all the sections of the entire chalk festival are pre-marked off for the artists to use, and they're all some form of Rectangle. But, there's this one spot. It's in Animation Alley. It's right near the bottom of a large staircase and it's a circle. Also a lot of people are going to walk by it because it's so prominent. Ruston has wanted that for years, thinking there's something cool we could do with it. 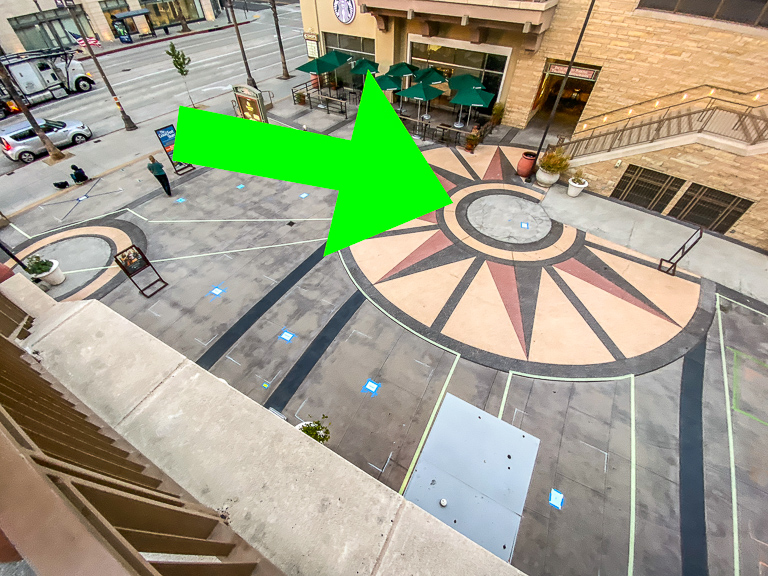 About a year before the event, we contacted the organizers, asking if they could save that spot for us. I know in the past they've kept certain high-profile spots for other artists, so it couldn't hurt to try. Pasadena Chalk Festival Event Manager Kat Ward said she'd see what she could do. Good enough for us!
In the end, Ruston decided to go with this Circular Mickey Mouse Club logo. Not overly difficult, but instantly recognizable. Also, for years now, we like to dress up to match with our mural. We can be Mouseketeers! Sounds like we're off to a good start! 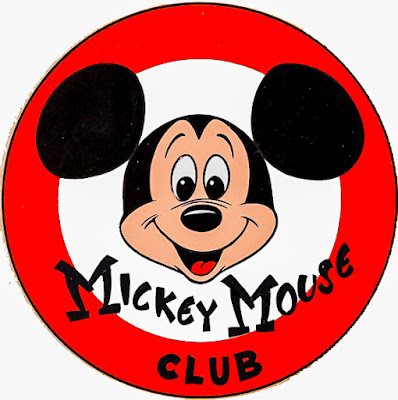 So it was decided all the way back in January what we were going to do. Mural is set and our costumes are set. As the days got closer, we were getting more and more excited.
And even though I live in Florida and travel the country in the RV full time, we had worked out our RV schedule for the year and planned it so that we would be near Pasadena around Fathers Day. 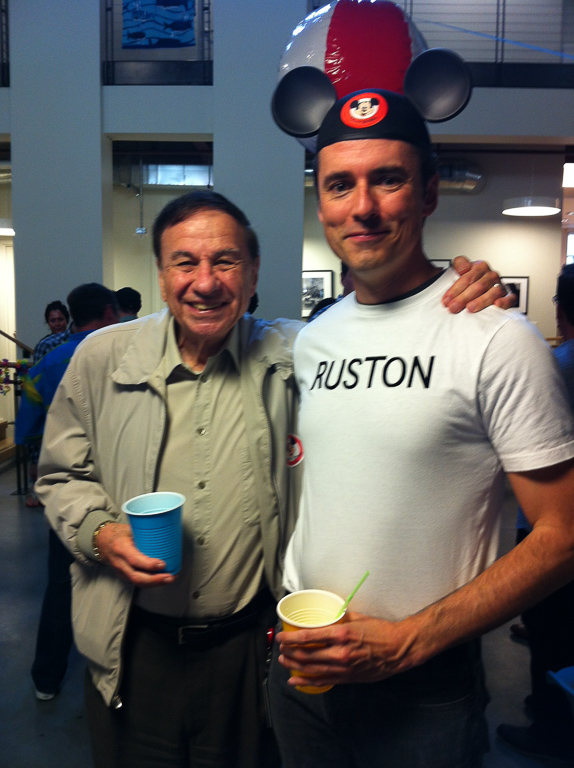 On June 2nd, about 2 weeks before the event, Ruston hit me up with a new idea. 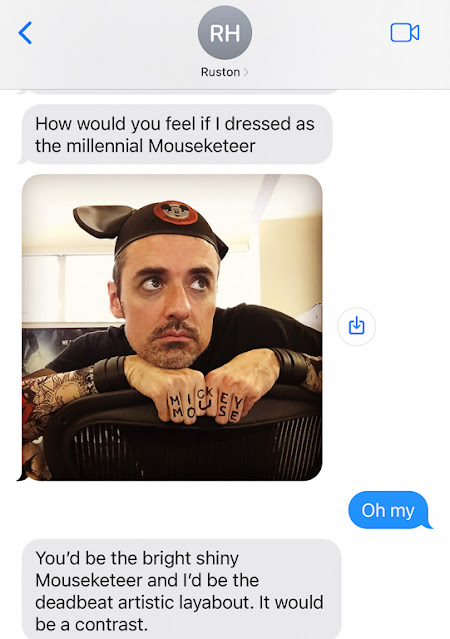 The inspiration for which came out of a random place. Ruston bought the hat on the left and put it in the back window of his car. He returned one day to find the ears completely warped by the heat, and an idea was born. 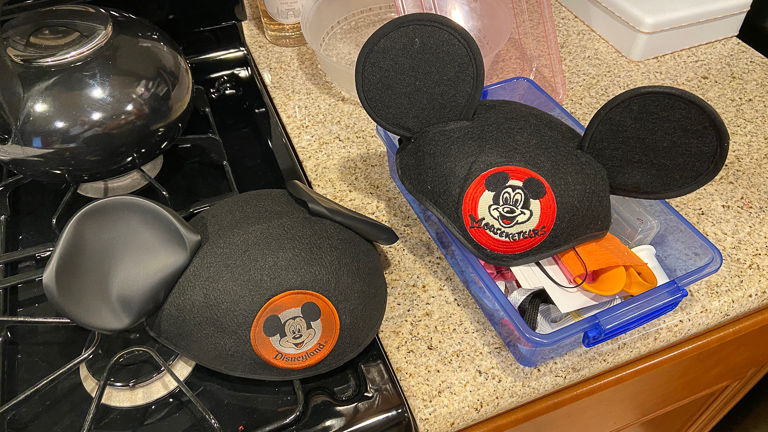 Ruston got to work, collaborating with an artistic friend of his, and made our new logo. This Mickey Mouse is sure to turn some heads. 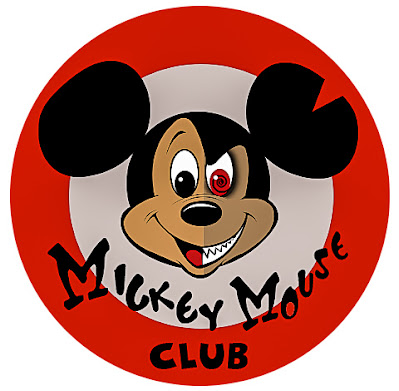 And with full sleeve tattoos, plus a little makeup on the day of, our costumes and our mural is all set! 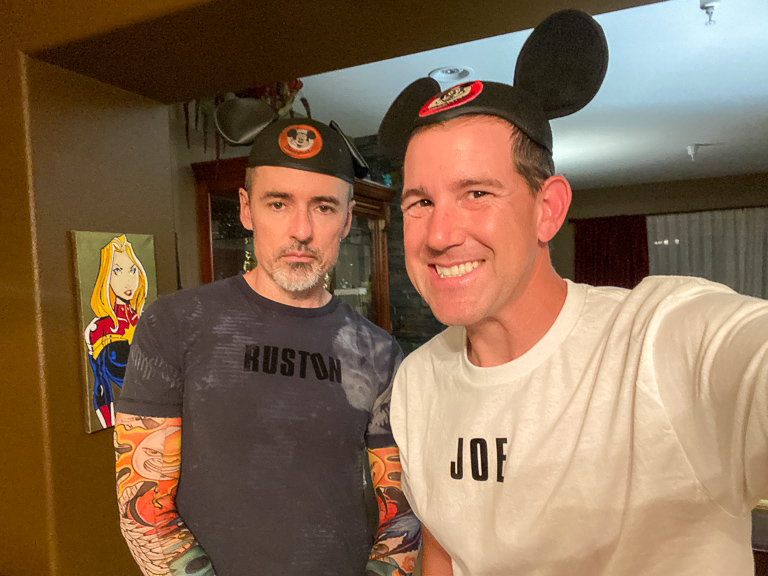 On the Thursday before the event, there is a big dinner and get together for all the chalk artists. I hopped on the Los Angeles Freeway joining all the other cars who were trying to get from one side of the city to the other. The drive from Anaheim to Pasadena was long, but bearable. 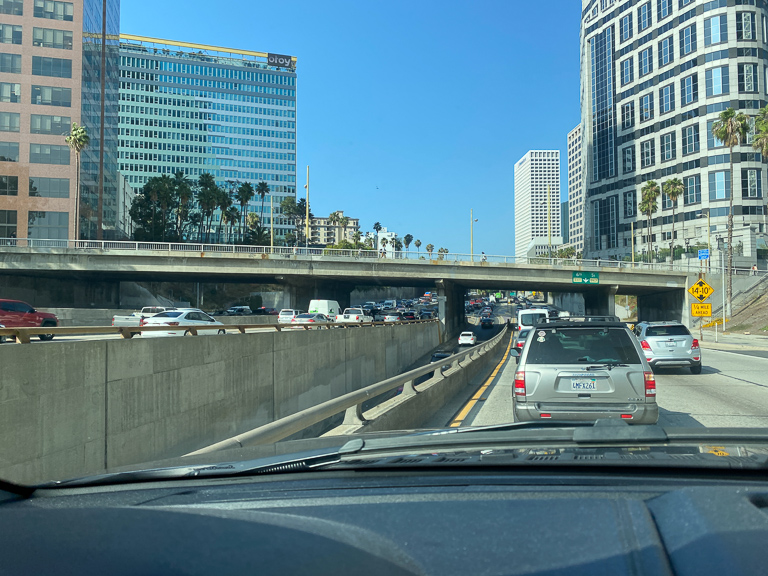 Now for the past few months, we've been back and forth with Kat, asking about that round spot at the bottom of the stairs. She's got it reserved for us, but it's still not guaranteed yet. A couple weeks before the event, Kat let us know that it's ours, but the Fire Marshall will get the final say. In the days before the event, the Marshall walks the grounds with the Festival Organizers and can change things as they see fit. In the past, we've seen this space open some years, and others it's been used. What will it be this year?
Ruston and I parked then walked up Animation Alley to our potential spot. Is it reserved? Is it ours? 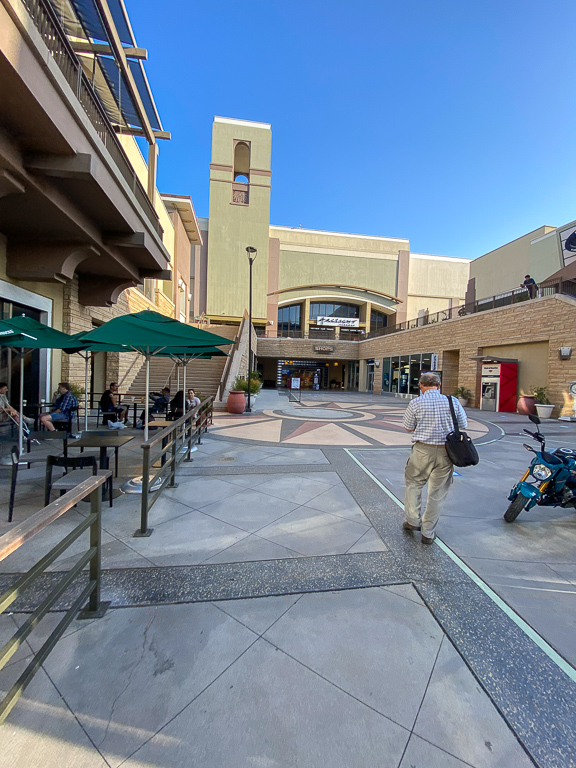 Yes! Ruston Harker and Joe Flowers. Right there on the official blue paper.
I heard later from the organizers that as they were walking around, once they got to this section they told the Marshall, "We need this spot. Disney is doing a mural here."
I'm glad they got it for us! Wow! That spot is huge! Bigger than anything we've done before! 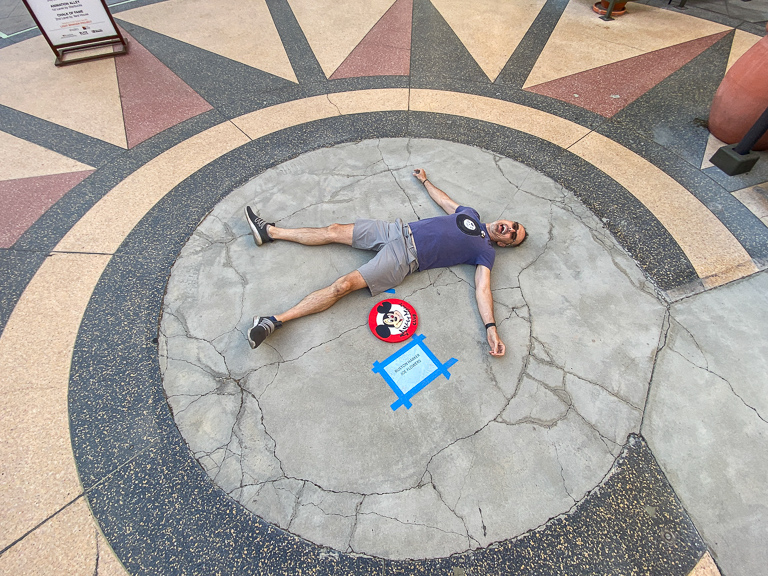 Participation in the Chalk Festival for returning artists is completely free. Just register with them ahead of time with the idea of what your picture will be, and you're in! The only thing they ask in return is a 1'x1' painting that they can auction off, to help raise money for The Light Bringer Project, an organization whose mission is to bring art to communities that need it.
Ruston and I go back and forth between who paints each year too. Because it's his year, he is responsible for it. I love that Ruston found a circular canvas to go with his circular mural. 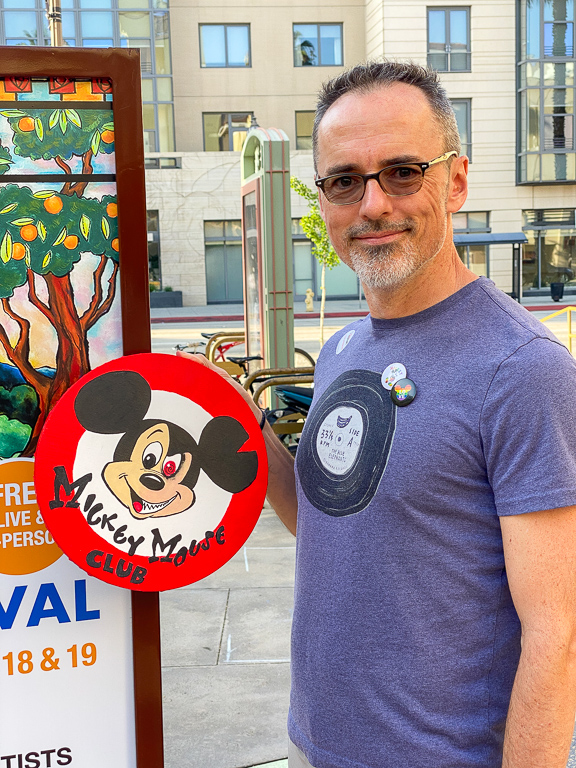 Sadly, the Paseo Mall seems to have been hit pretty hard with businesses leaving during Covid. One such restaurant was the PF Changs that was upstairs and overlooking the festival grounds. The Artist Party took over the space tonight and is having a meal for all the artists catered. Awesome! 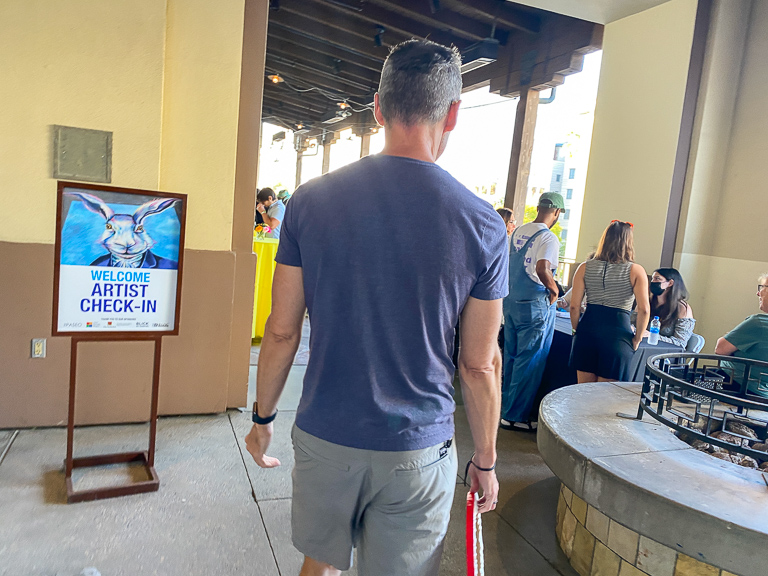 It was here we checked in, turned in Ruston's painting, and got our tickets for dinner. Plus we got to meet people who we haven't seen in a really long time! The last time all of us were together was June 2019, with all the in-person festivals since then being cancelled due to Covid. It also gave us a chance to thank Kat in person for all the work she did to get us our requested spot. Thank you! 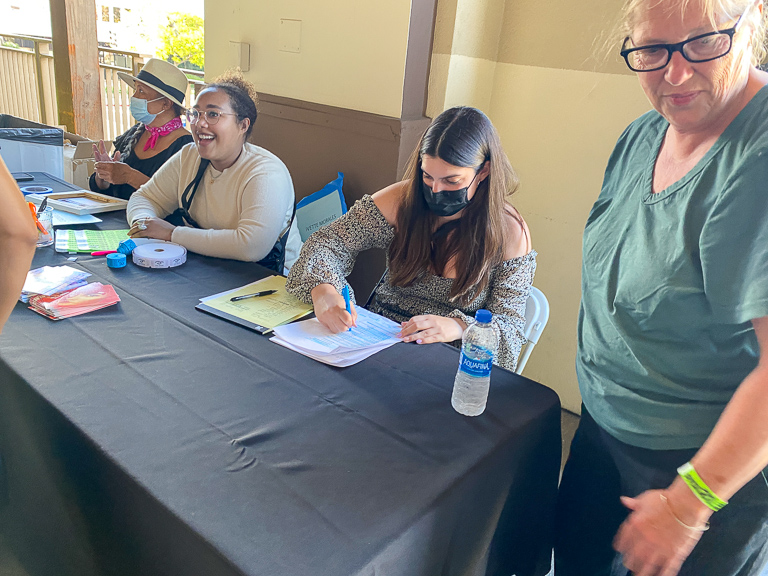 Now we get to mingle, which was so great! Many of these people are like old friends who we haven't seen in a long time. People like Brian Biery who is the official photographer for the event. He gets so many photos of others, but how often does a photographer get pictures of themselves? From experience, not often. 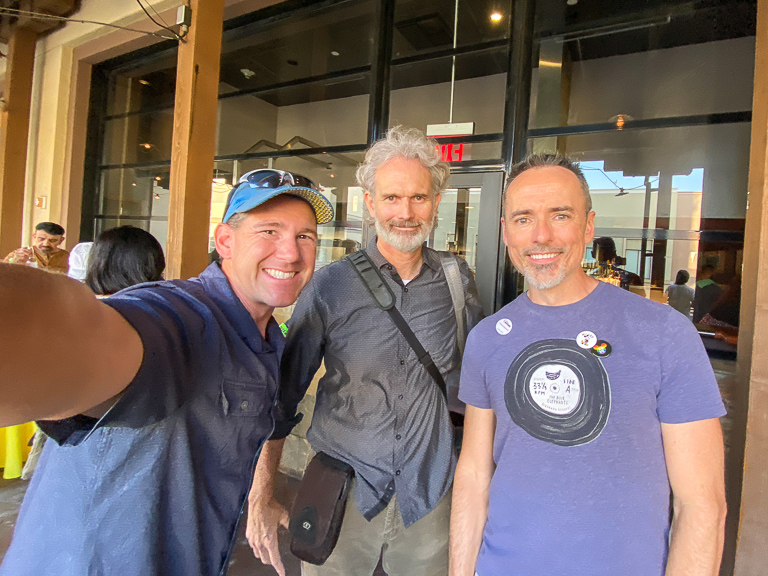 Inside, we met with Patricia Hurley, the managing director of The Light Bringer Project. We've known her since 2015 when we first started participating in the event, and she's always so nice and welcoming. It was good to see her in person and catch up a bit. 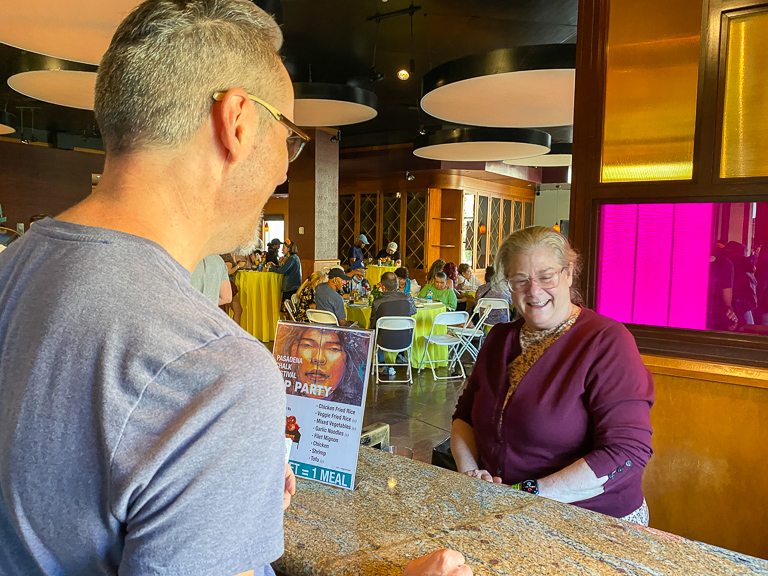 Our dinner choices include Fried Rice, Filet Mignon, Chicken, Shrimp, and Tofu. Wow! I opted for Filet Mignon and Chicken, which were tasty, though I think my steak was scooped with the shrimp spoon, which gave it a flavor I was not expecting. 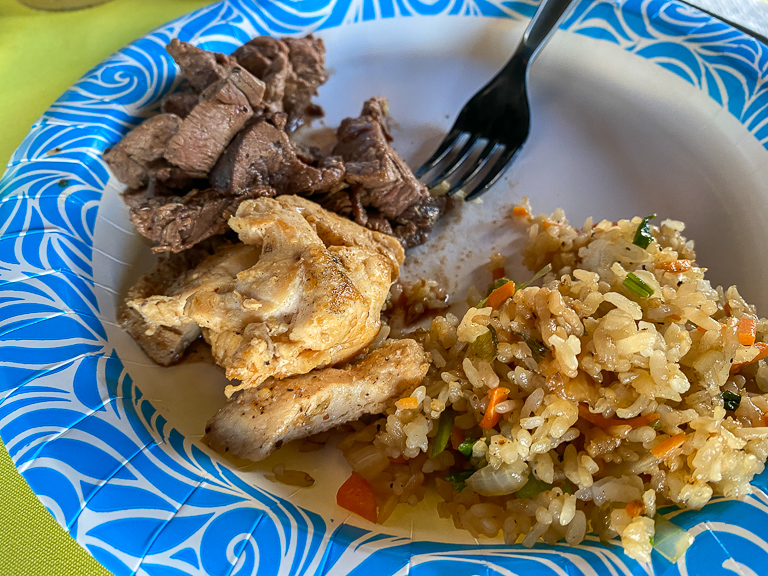 Ruston and I grabbed our meal, then wandered around chatting with a few of the other artists that we recognized, and surprising to us, being recognized ourselves! Yes, we are those guys who always do something related to Disney. Yes, that was us who did Herbie! Yes, that was our colorful Disney castle. Yes, we did that Ducktales mural years back. It was a lot of fun hearing what people remembered about us.
We also made a few new friends too! New artists like Stella who is a high school student who usually works with other mediums but decided to give chalk a try this year. And Beky Bell, an illustrator from Los Angeles who is also a first timer at the chalk festival. Ruston and I shared our tips and tricks, things we wish we knew our very first year here. 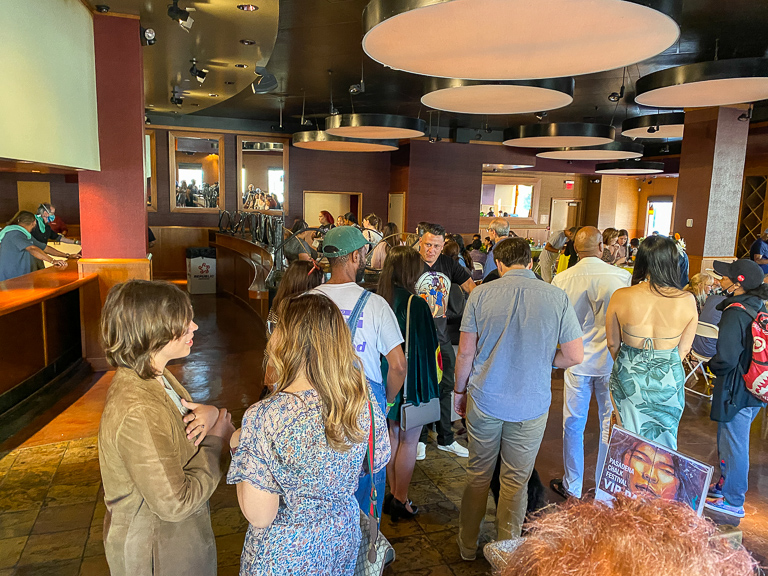 Usually during these artist parties, Tom Coston, the Light Bringer Project President, will come to the front and say a few words. Sadly, after successfully avoiding Covid for so long, in the days leading up to the event he started feeling sick and tested positive. This is the first Pasadena Chalk Festival that he's missed since it started. Bummer! Well he was still able to join us on a Zoom call, then Patricia, Kat, and others talked about the event. It really is great to see everyone here again. 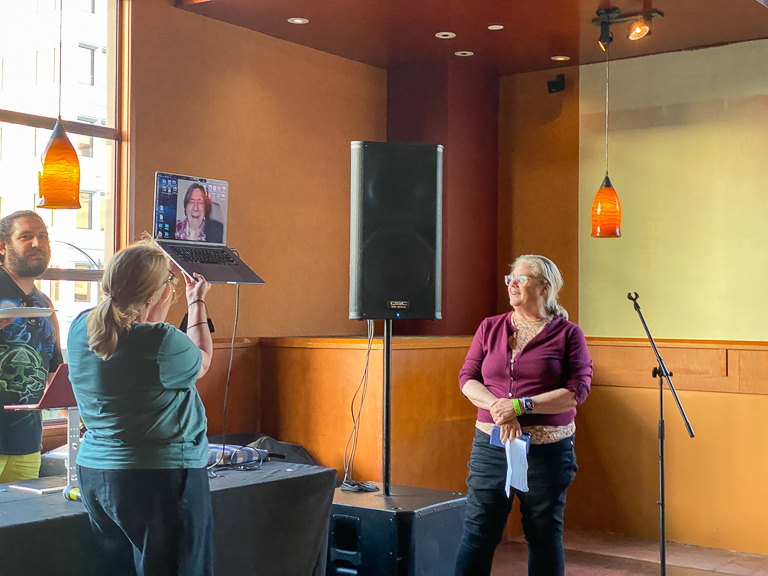 Goodbye Paseo! We'll be back shortly!

So there's many ways for artists to get their ideas down on the ground. Some have it all in their head and can freehand it all. Others reference a printout, grid off the pavement and go from there. Still others make overlays and poke holes or cutaway the paper to make a stencil. We do, and always have done, something a little different. I still make a life-size printout of what we're going to making, but instead of cutting it out, we chalk the back of the paper, like making a giant piece of carbon paper, then trace out our design. It's worked out very well for us after we figured the technique of putting down a base layer of white underneath, instead of going directly onto the pavement.
I said that our mural is the largest we've ever done. In the past, I would send our design to Staples and have them print 36"x48" blueprints, then reassemble them. In the past, I've only needed 4 pages total, making our biggest mural 6 feet by 8 feet. The circle we're working with is 124" in diameter, which is over 10 feet across! Even with 6 sheets we won't have everything covered! 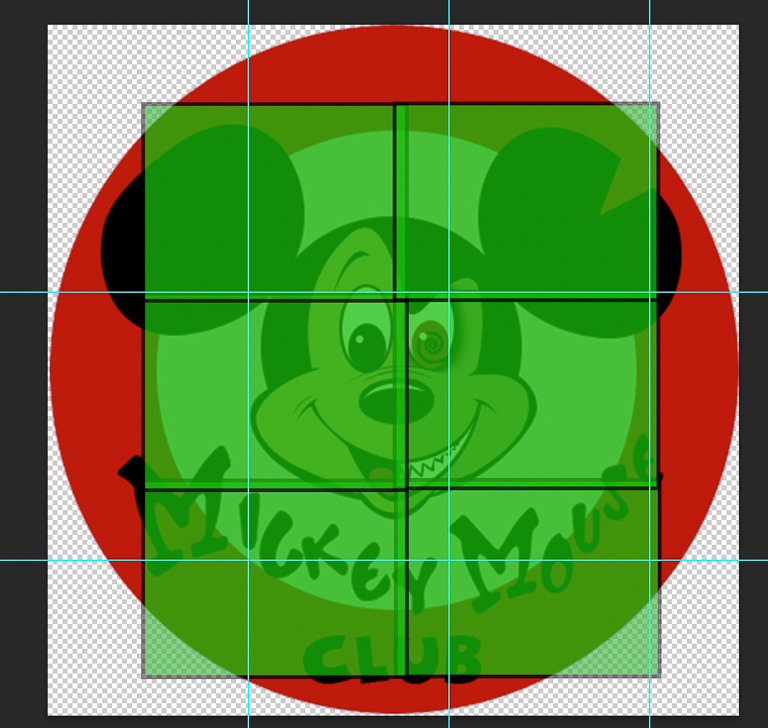 And these sheets are cheap, but not super cheap. At $7.98 each, it's not too bad if you want to buy 4. Buying 12 to get 100% coverage is unrealistic. Luckily if I position things a certain way, I can get all the important bits, and only leave the border unfinished. That's good enough for me! 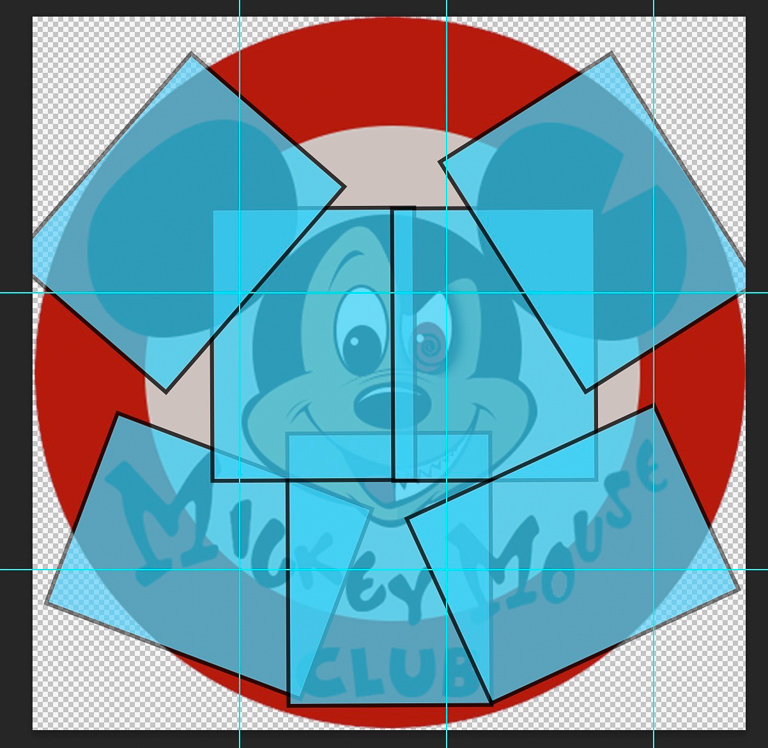 After the party, we went back to Ruston's place to lay everything out and make sure we're ready to go on Saturday morning. This year we didn't get the chance to practice in the driveway ahead of time, so we're just going for it. I think that'll be fine though. We're old pros at this point.
You can see that it doesn't cover the entire logo. I made alignment points on each of the pages in at least 2 spots so we'd know how everything should fit together. You'll also see that Mickey's right ear has a line going through it. That's the border, and we can use that as a guide to finish any of the outside ring that is missing. 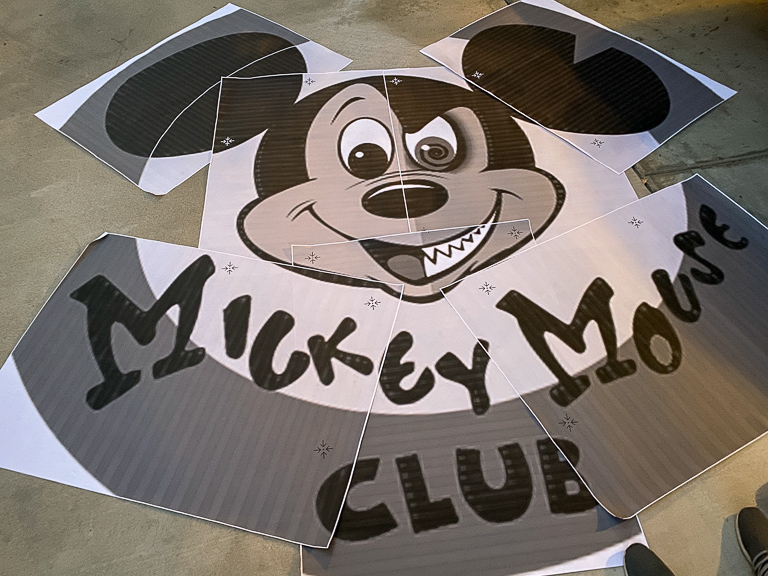 Looks great! It is large though, covering 84 square feet versus previous murals we've done that were only 48 square feet. I think we can do it though. 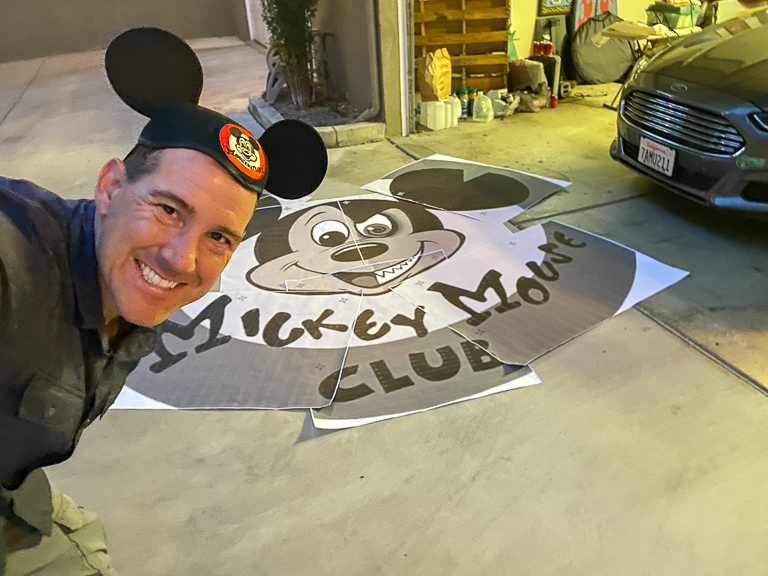 It's a good thing we've got a lot of chalk remaining from previous years of participating in the chalk festival. Blick's Art Supplies graciously donates all the chalk for this event, and each artist gets a 12 count, 24 count, and 48 count pack of chalk. We've got many areas that are all the same color, so we've got to have a lot of the same color red and black! 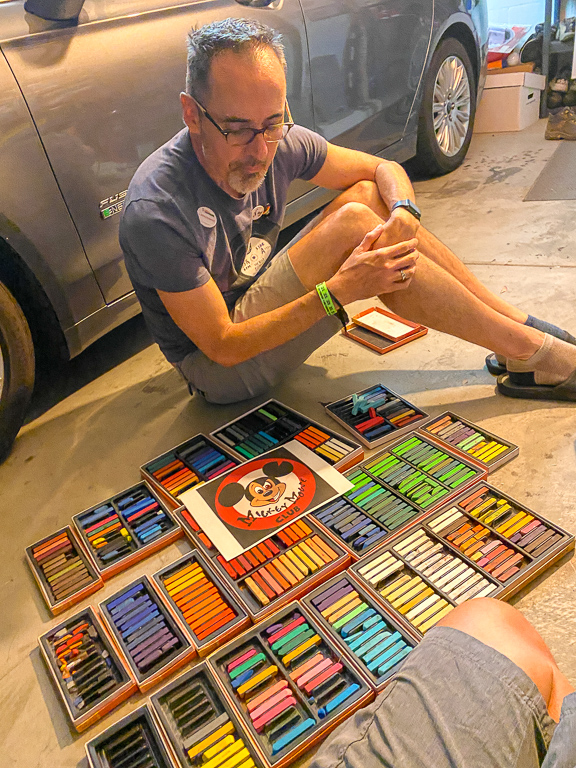 The Pasadena Chalk Festival Instagram is keeping everyone up to date. And there's our artwork from a previous year being featured! We loved seeing that!
Who is getting excited? We are! The festival is almost here! 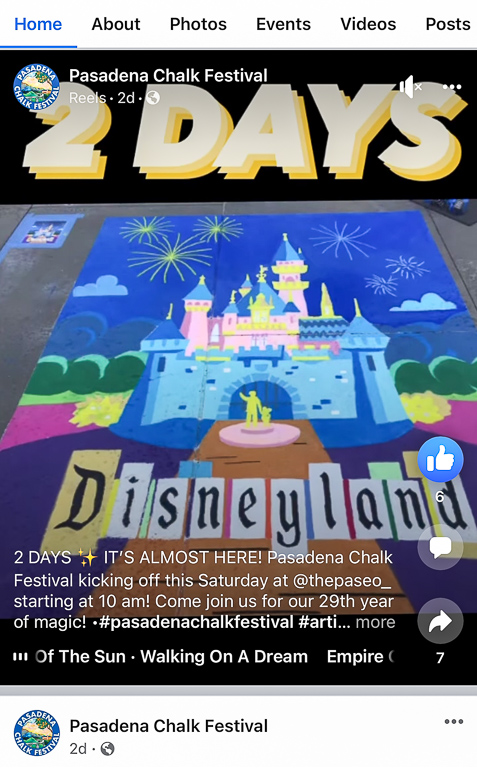