I have seen the Cabazon dinosaurs a few times driving by, but I've never actually stopped at them. It's our last day in Palm Springs and that's pretty close by, so we've definitely got to do that. 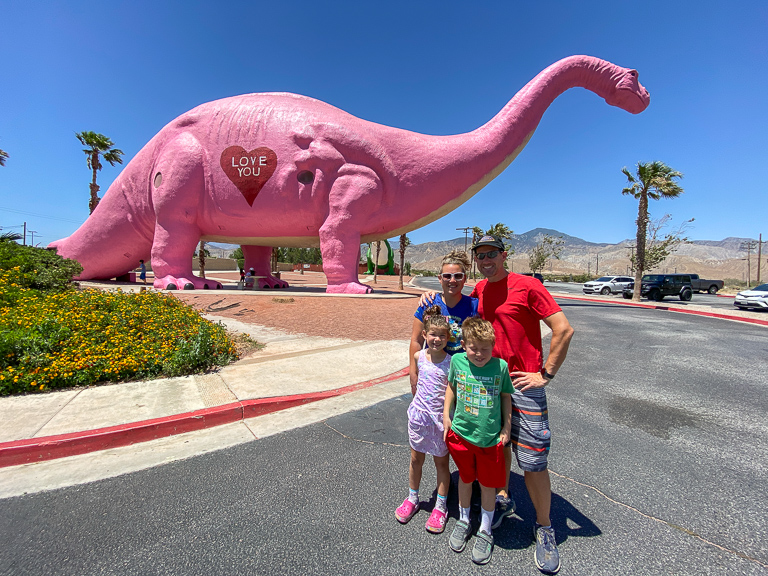 You know, the kids are pretty into video games, and I know a movie that I think they might like called The Wizard. It's about a couple kids, one of them really good at video games, who travel across the country to participate in a video game tournament in California. The Wizard, named Jimmy, repeats "California, California" over and over again, because he wants to get back here, to the Cabazon Dinosaurs. Did I have them watch the whole movie to see the 2 minutes at the end where the dinosaurs appear. Yes, yes I did. 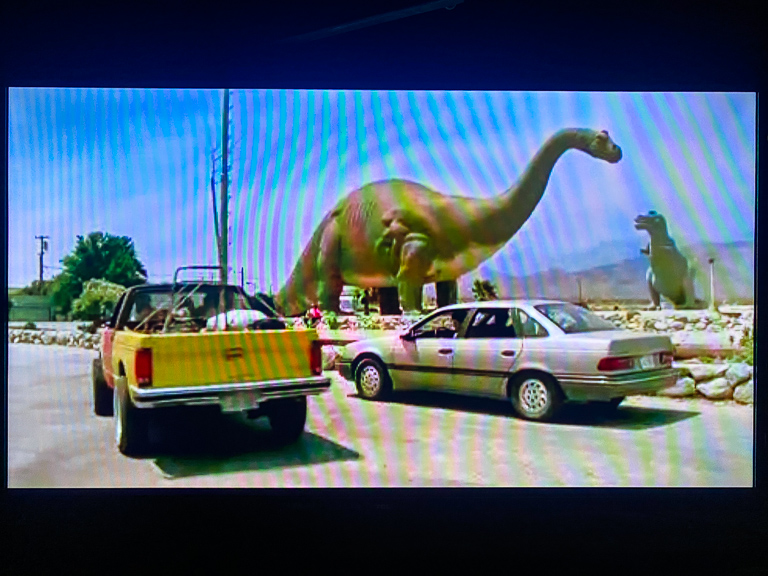 And now it's our turn to see the dinosaurs in person! 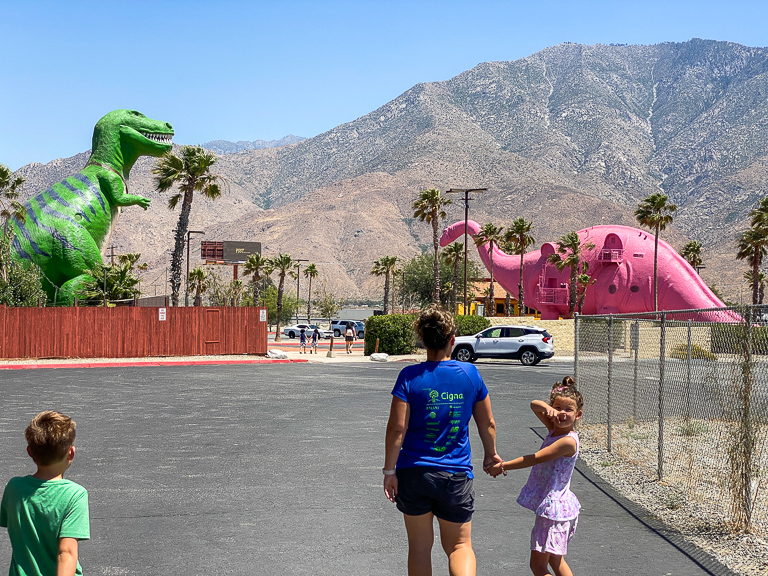 I love that the dinos get painted for different holidays! I've even seen pictures of Mr. Rex in a Santa costume! 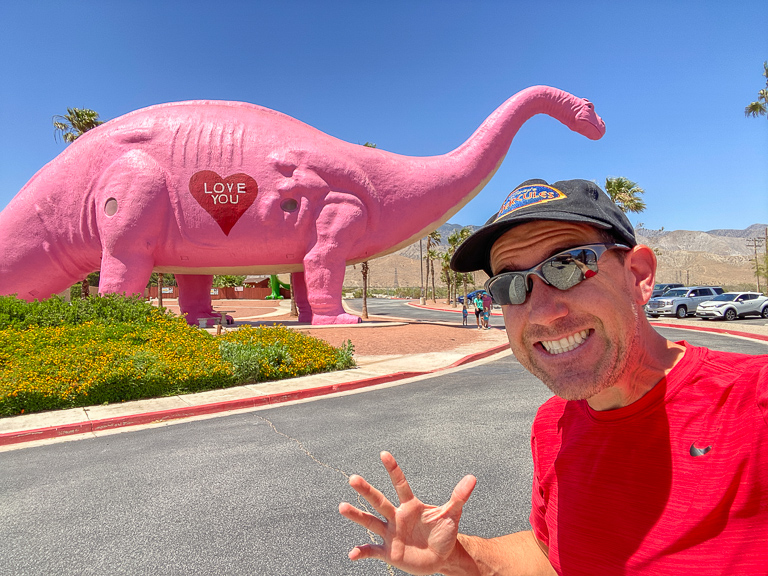 Not only can you see the outside, but you can also go inside! Just off the tail, there's a doorway leading inside. 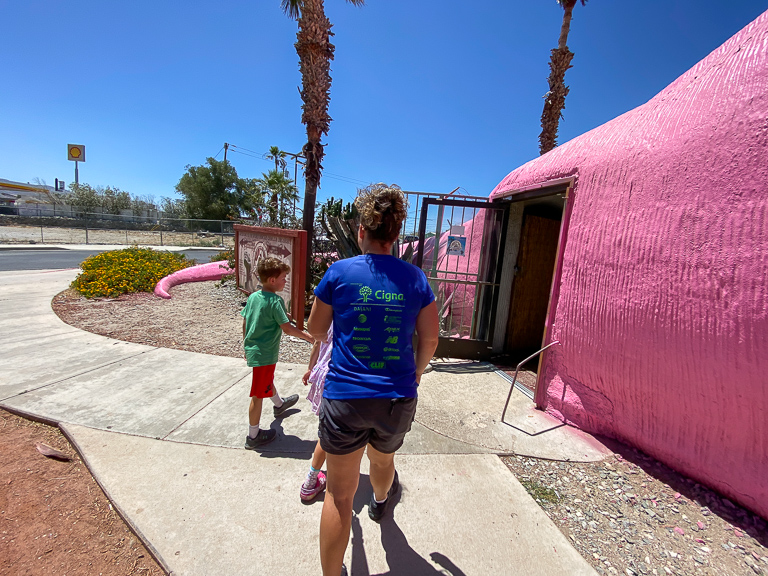 It's Dinney/Dinny! Started in 1960 and finished in 1971, Claude Bell built Dinny, a 150 foot long Brontosaurus as a roadside attraction to bring more people to his nearby restaurant, the Wheel Inn! 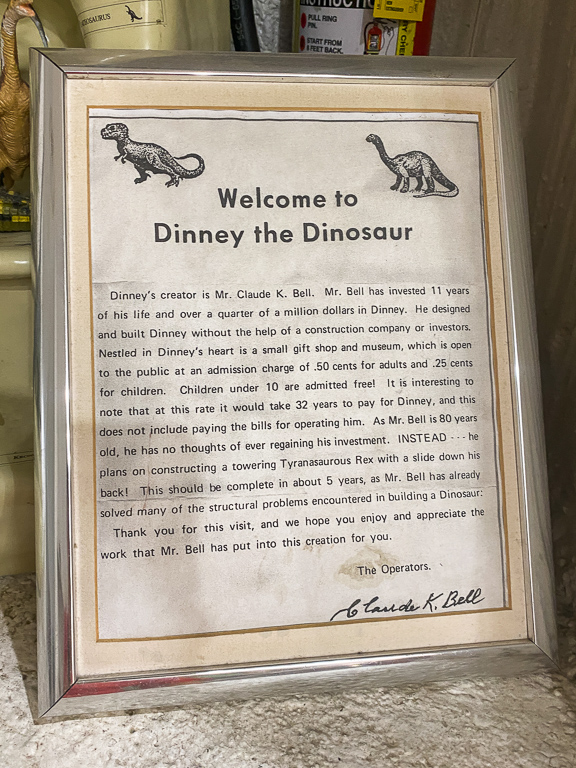 There's a stairway leading up Dinny's tail into a gift shop. 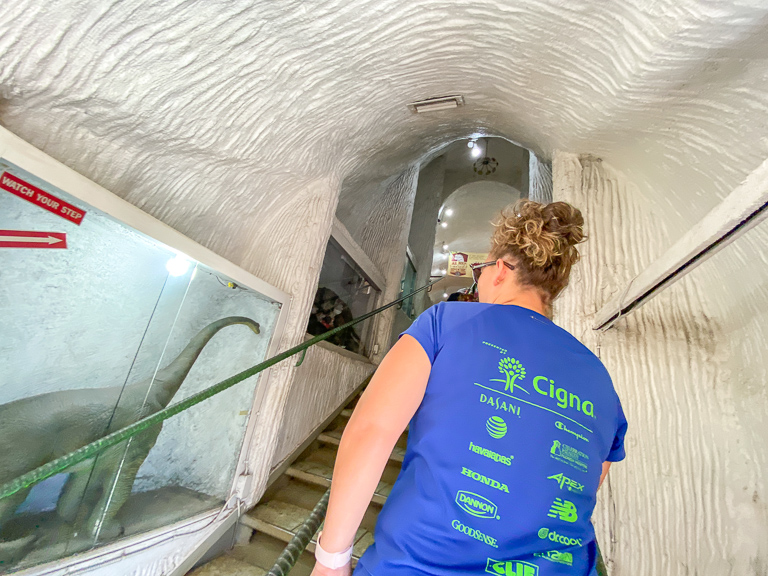 Along the stairway are models of different dinosaurs. 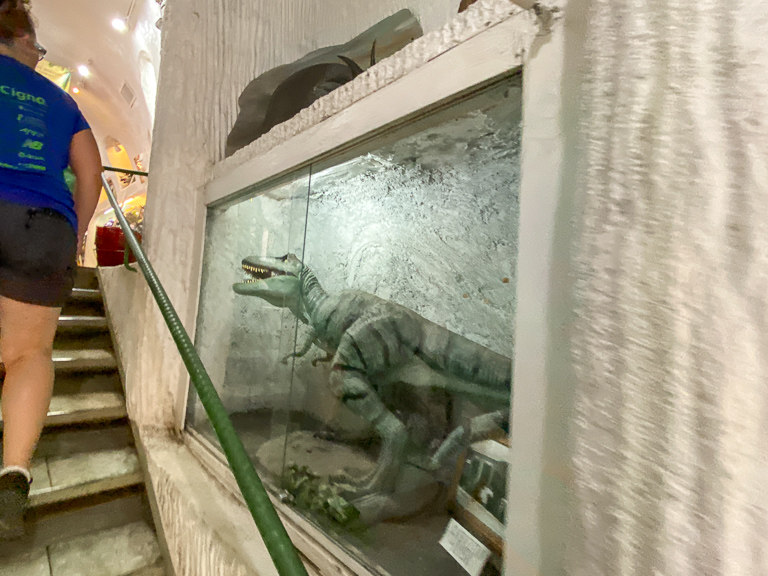 And it opens into the gift shop in the belly of the dinosaur. 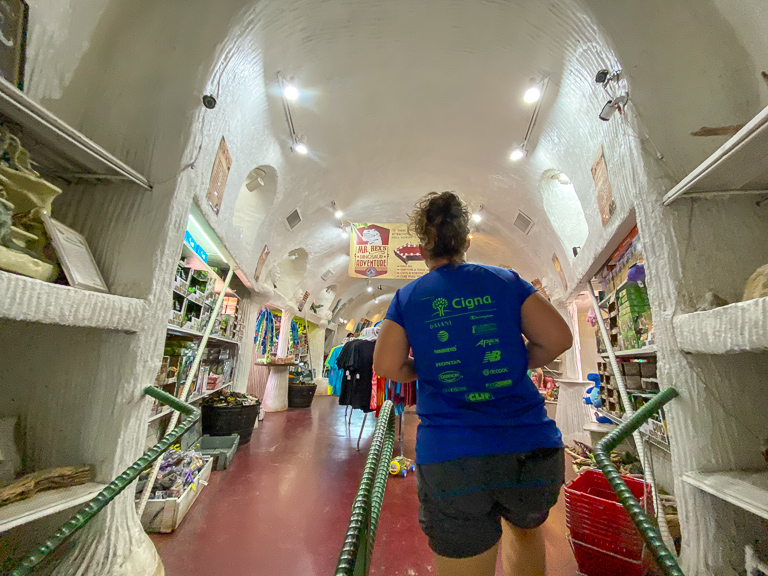 Looking back down the stairwell. 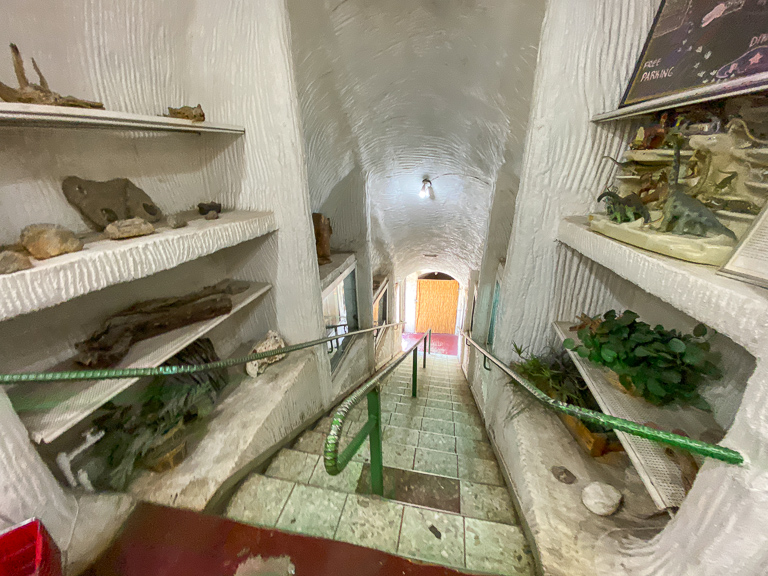 He's a clip from The Wizard. Bottom right corner shows that same stairwell that Jimmy climbed up. Jimmy then ran over to this curtain to hide behind it. 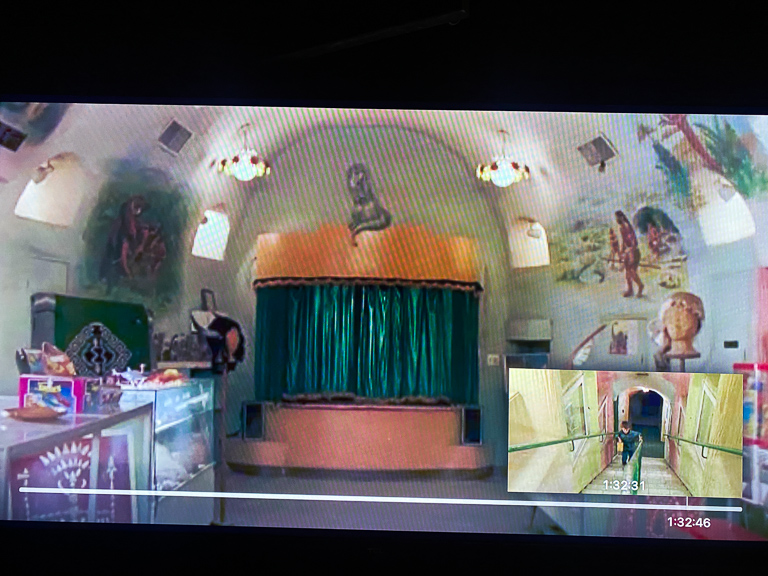 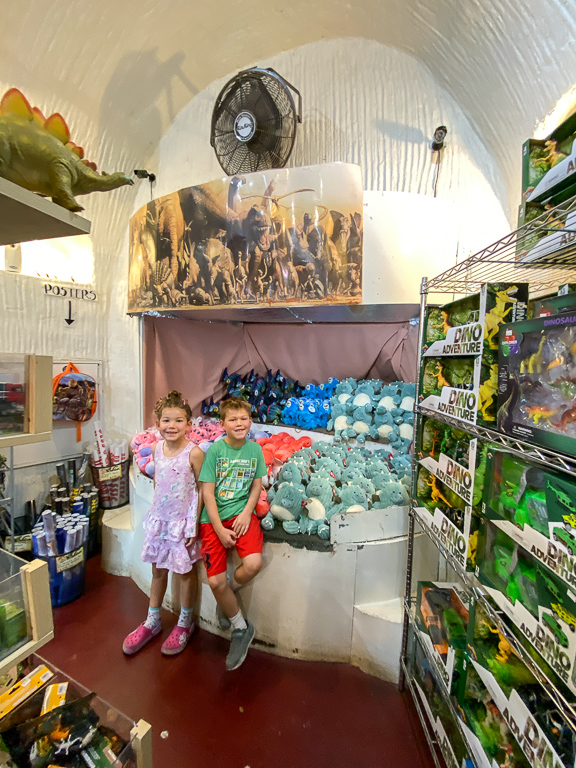 We looked through the rest of the gift shop. There's lots of dino themed merchandise. 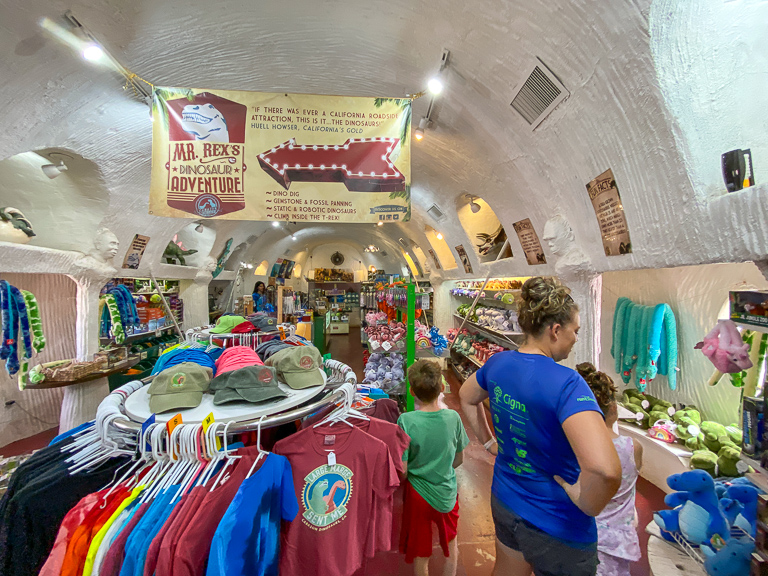 Dino facts on the walls. 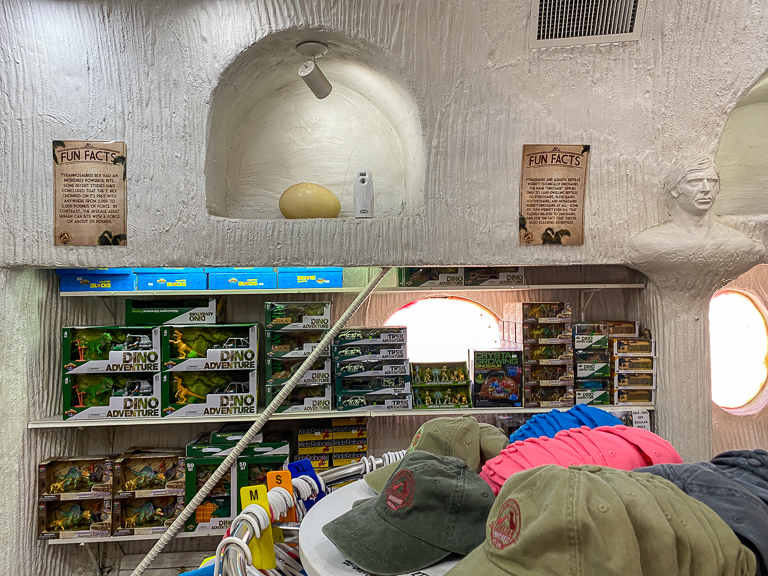 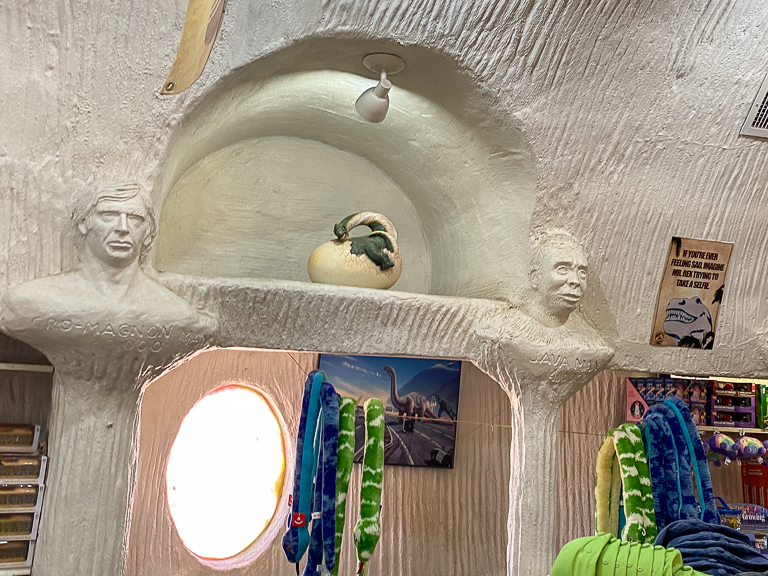 The kids wanted to get a plushie. 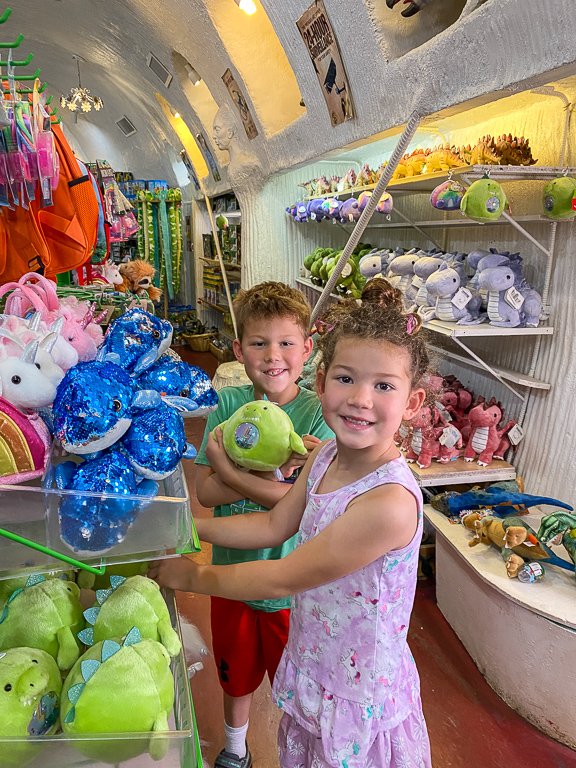 I like that they have pins. I wonder if "California" at the top is from The Wizard. I know Large Marge is from another movie Pee-Wee's Big Adventure. 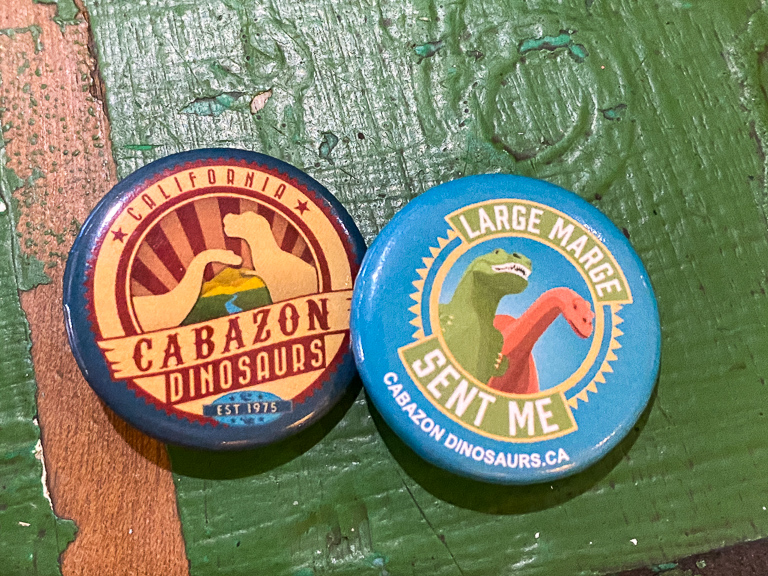 Ooh, a snake! Guess what else I found. Rattlesnake Eggs! 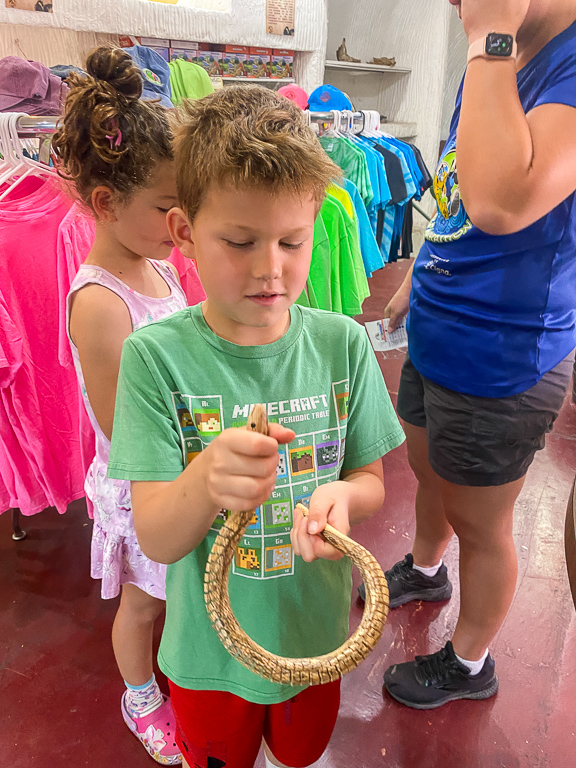 I don't know what I've done that the kids don't just trust me with things...
Actually I remember my Dad doing giving me a similar envelope when I was about their age. It's actually just a metal washer on a rubber band that you twist up, and when you open the envelope, it rattles the paper, sounding like a rattlesnake.
Something else I wanted to do, we've got to get a family picture. 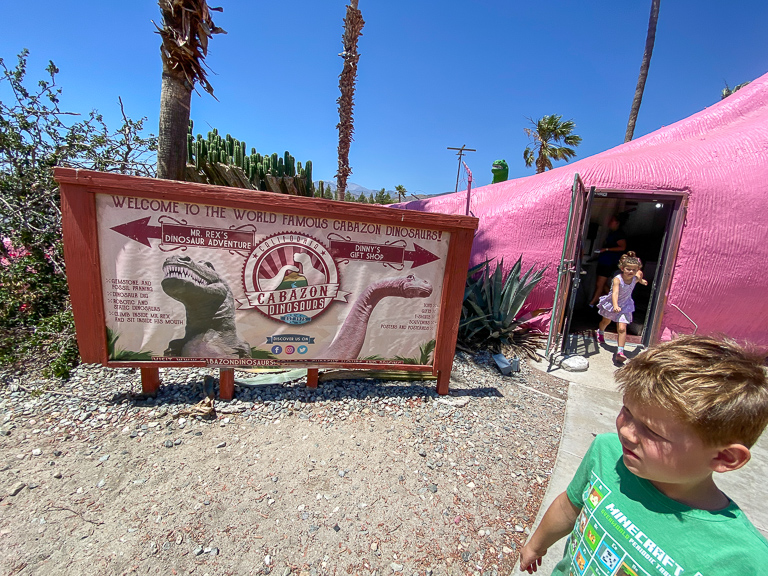 Sitting on Dinny's foot with Mr. Rex in the background. Just like... 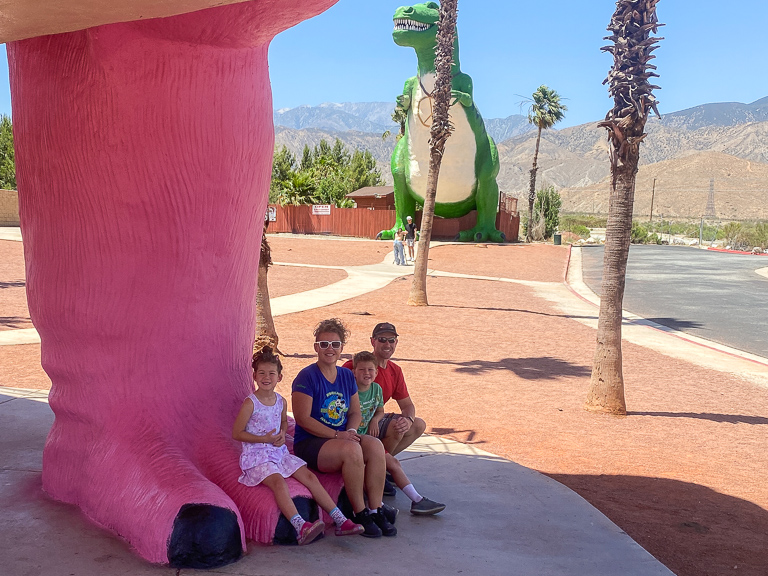 The family picture from The Wizard! I couldn't find a reference online, so I just went from memory. Pretty close. 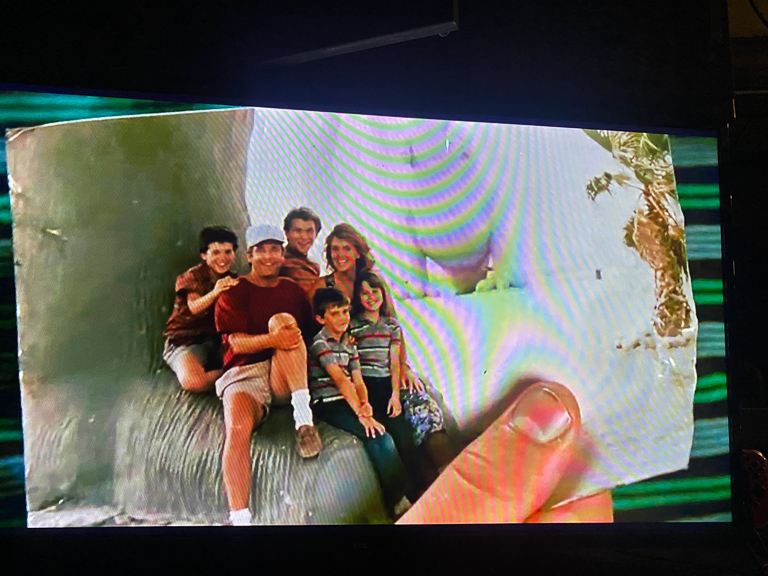 As a separate admission, you can pay $15 per adult or $13 for kids to climb inside Mr Rex and see a dinosaur park. Eh, we like dinosaurs, but that's a little much for us for just a few minutes. 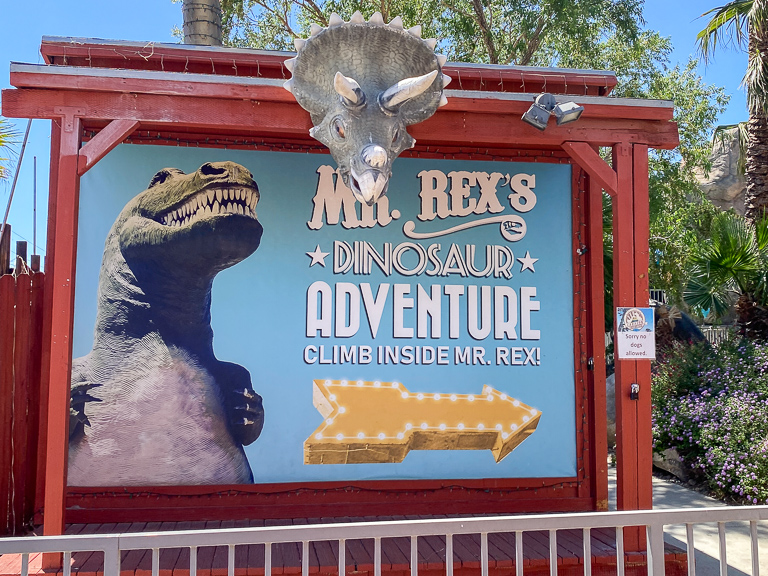 Instead we took a look around what was outside the Dino Park. Watch out kids! Don't get eaten! 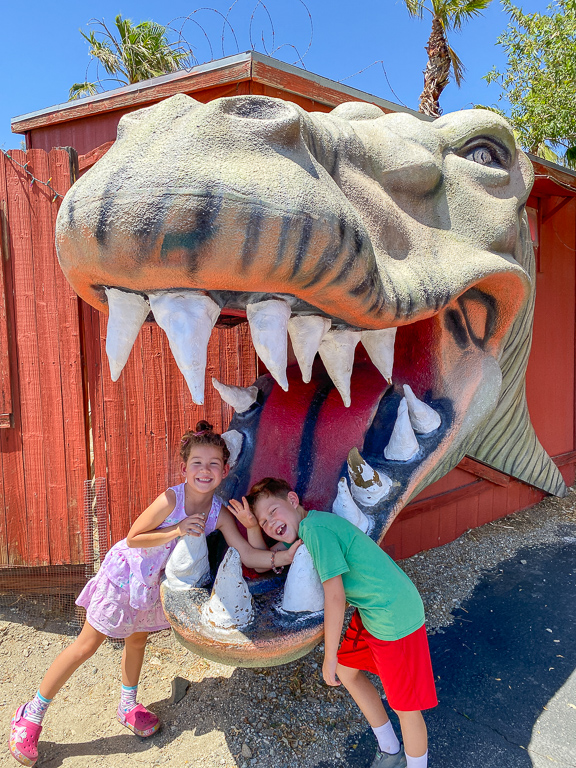 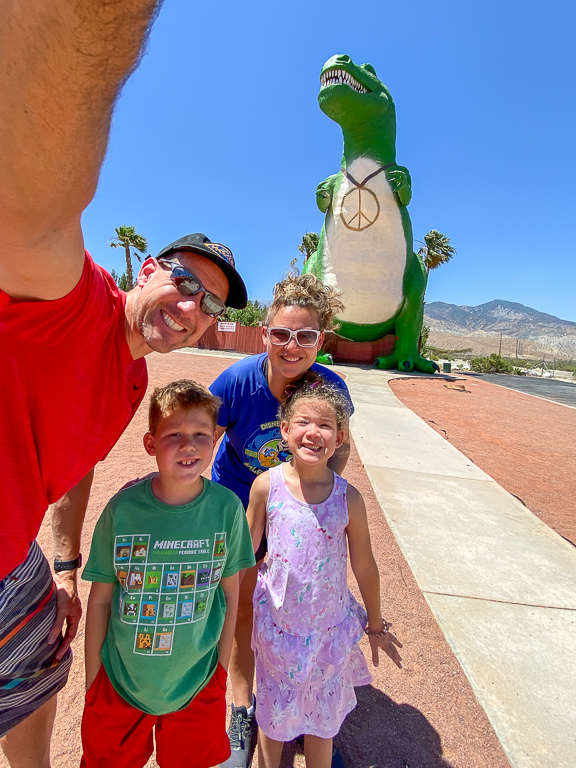 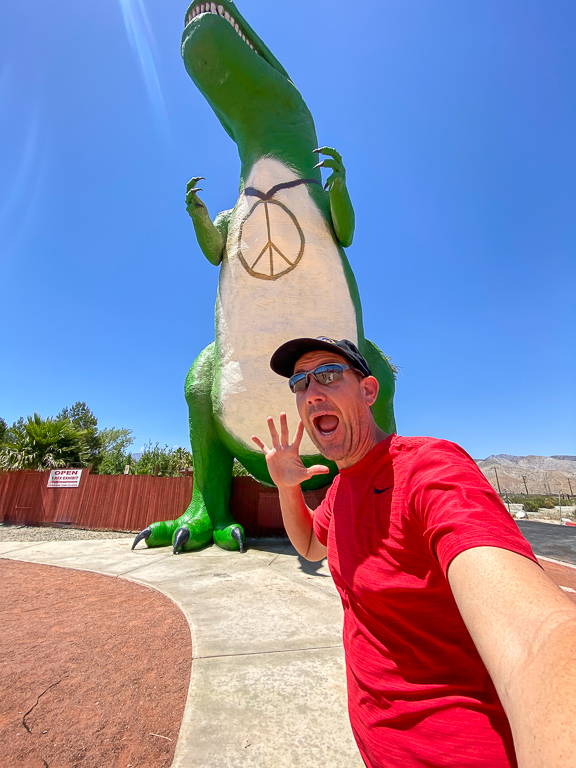 The dinosaurs are great, but there's one thing that the kids are even more interested in right now on this hot day. 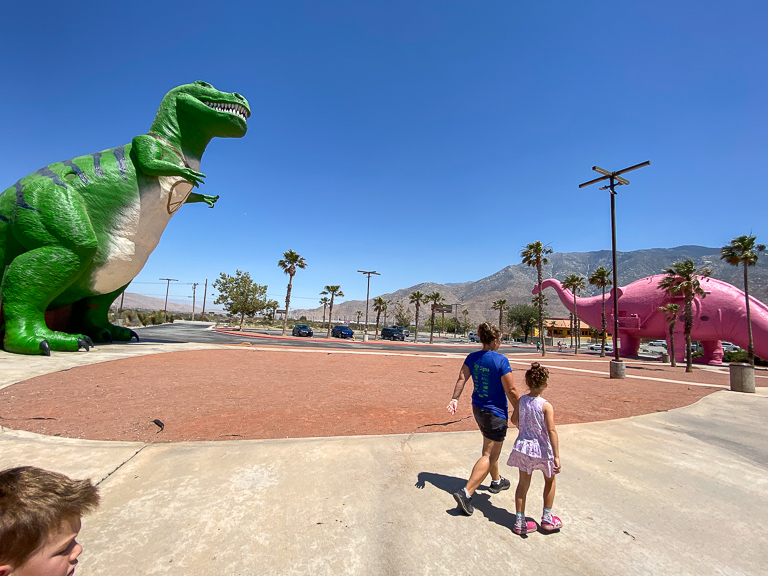 Right in front of Dinny. 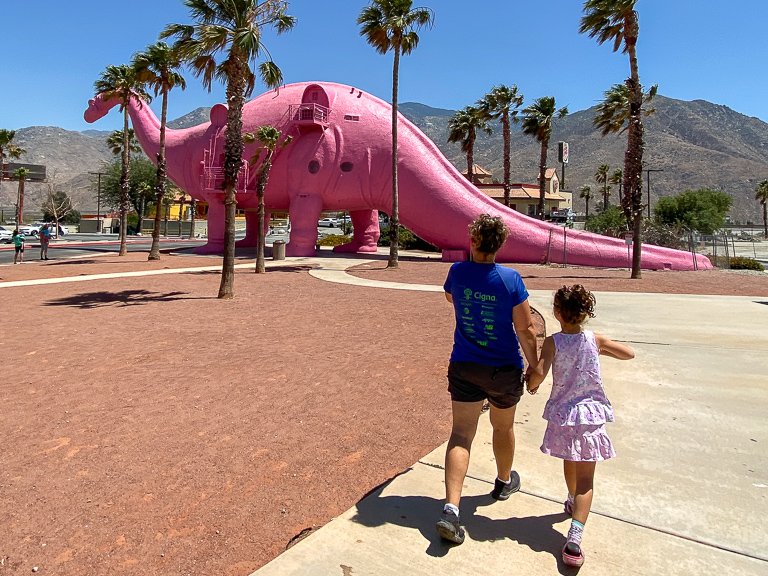 With big signs on the windows, advertising $1 Icees, is a Burger King! Those are going to be perfect for a hot day like today. 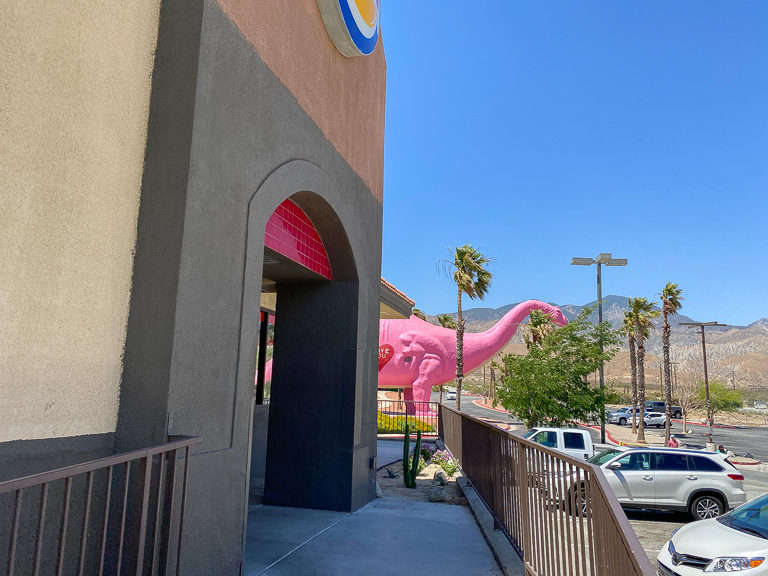 I loved seeing the Cabazon dinosaurs today! It was a great stop! 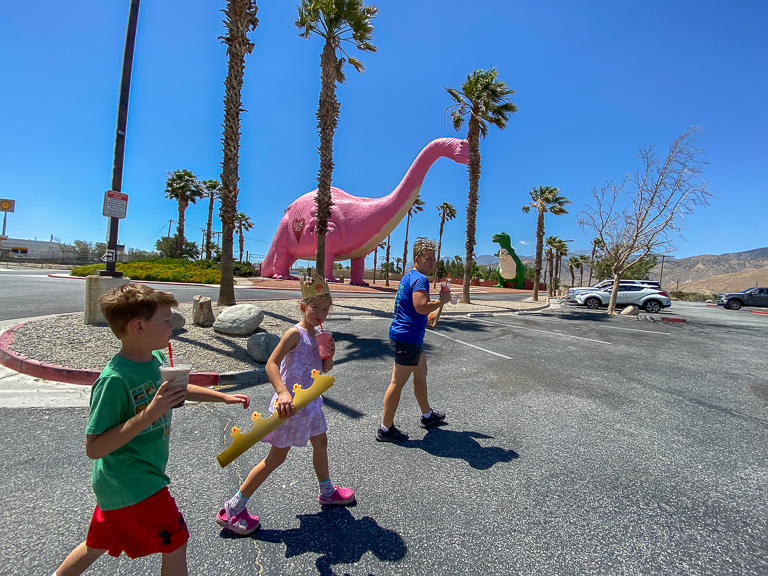