In an effort to bring some excitement to what normally be a boring bowl of oatmeal, General Mills has decided to combine 4 of its popular cereal flavors with oatmeal. 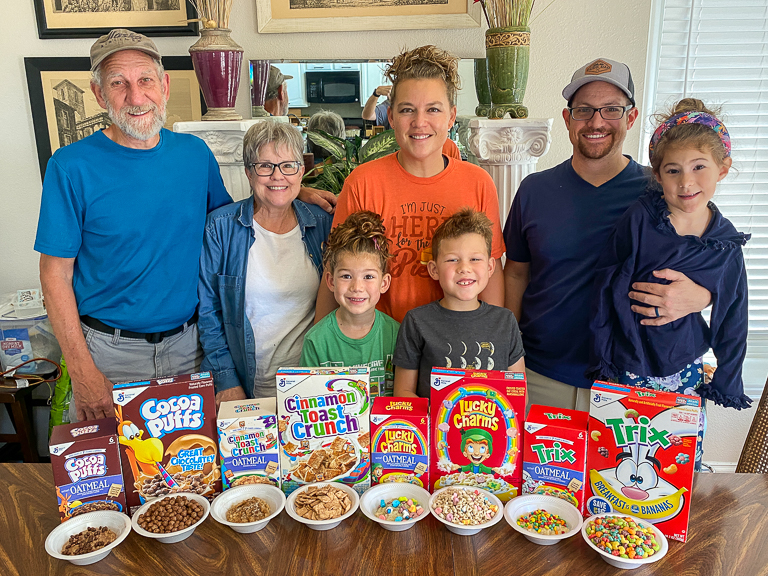 There's Cocoa Puffs for the chocolate lovers, Cinnamon Toast Crunch for the cinnamon lovers, Lucky Charms for the marshmallow lovers, and Trix for the fruit lovers.

Try all the flavors? Yes, I think I will.

In fact, we're not going to just be trying these against each other. We're going to be comparing them to the original cereals too! There's 8 different breakfast items to eat today! 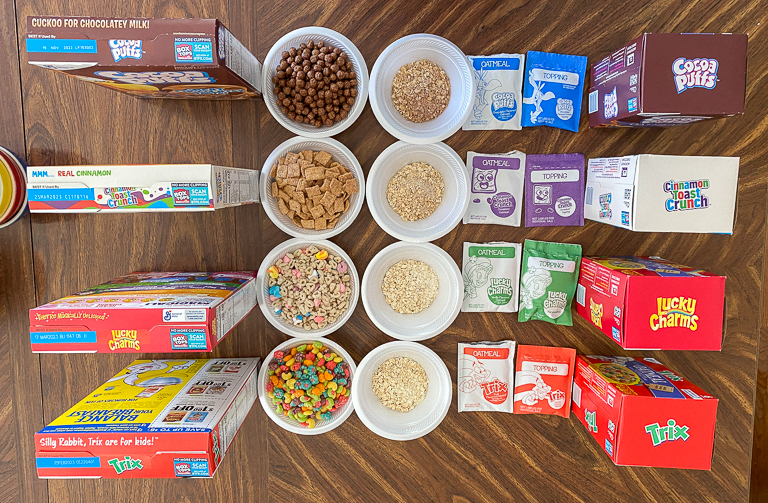 All of these are instant oatmeals that will be cooked in the microwave. This is what they look like before they go in. The Cocoa Puffs Oatmeal has chocolate powder mixed in with it and will be a chocolaty oatmeal. 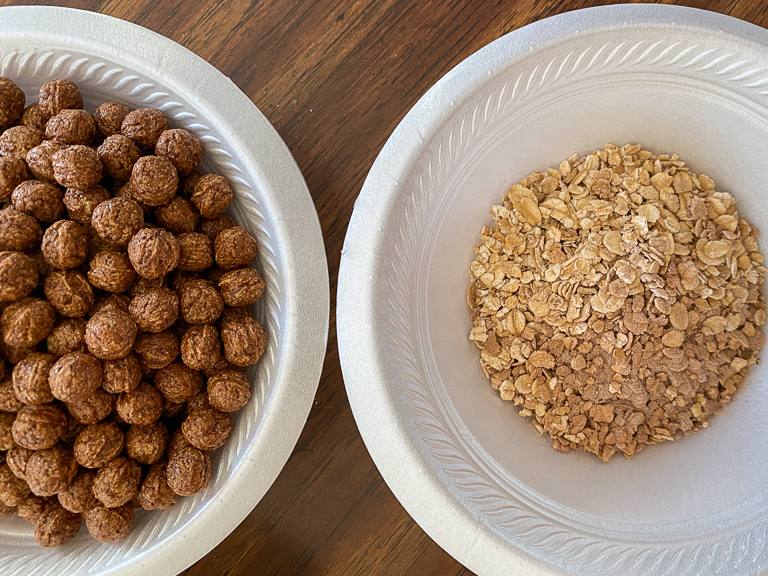 The Cinnamon Toast Crunch Oatmeal of course has cinnamon. 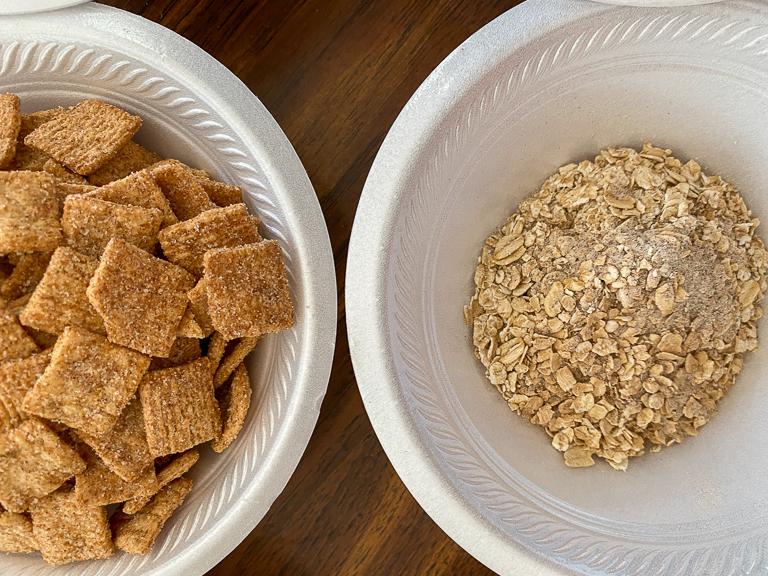 The Lucky Charms Oatmeal says that it is vanilla flavored. 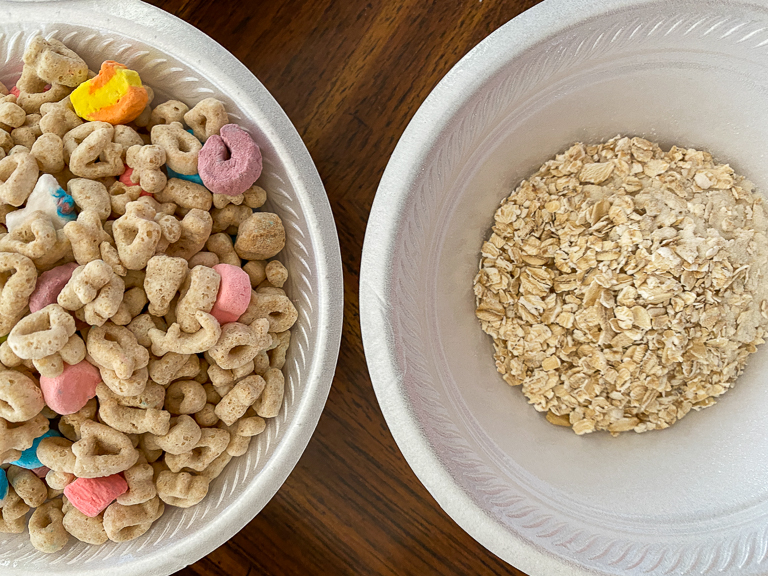 And the Trix Oatmeal has mixed fruit flavoring into the oatmeal. 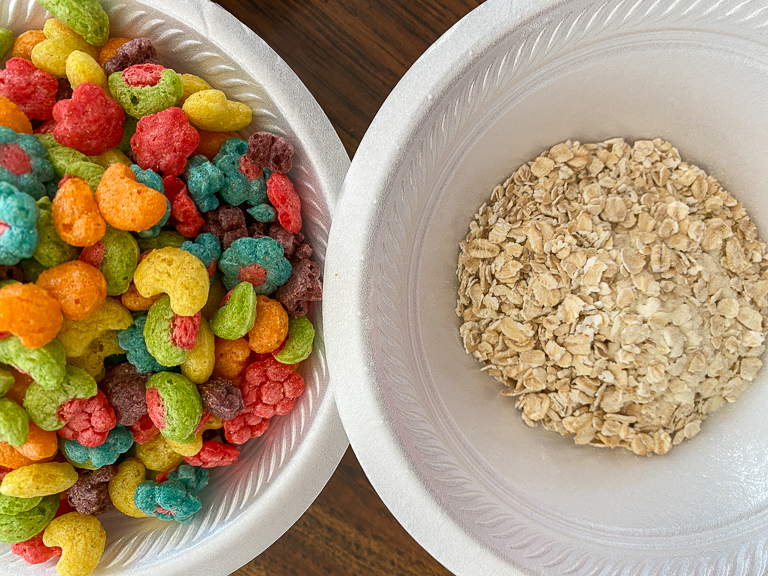 I added the recommended amount of water to each and then microwaved them in glass bowls. 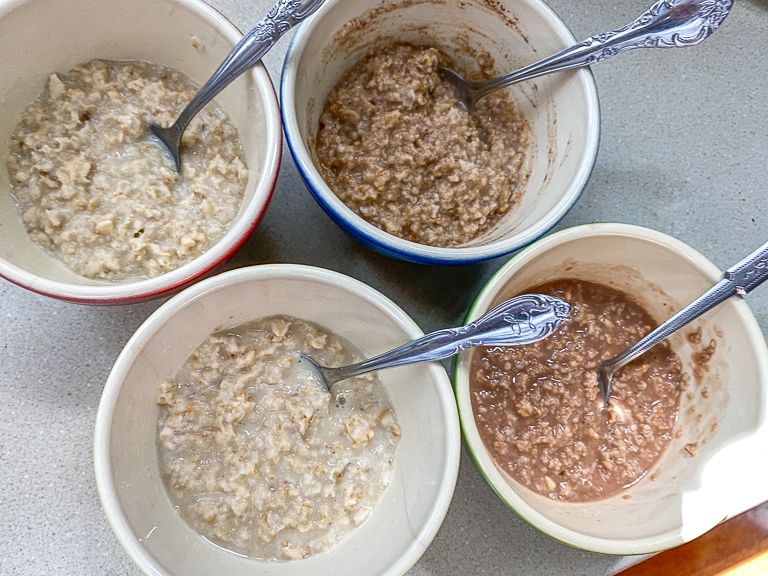 Afterwards I recruited the kids to help me spread the different toppings onto the oatmeal.
For the Cocoa Puffs, there is a Chocolatey Flavored Crunchy Topping. 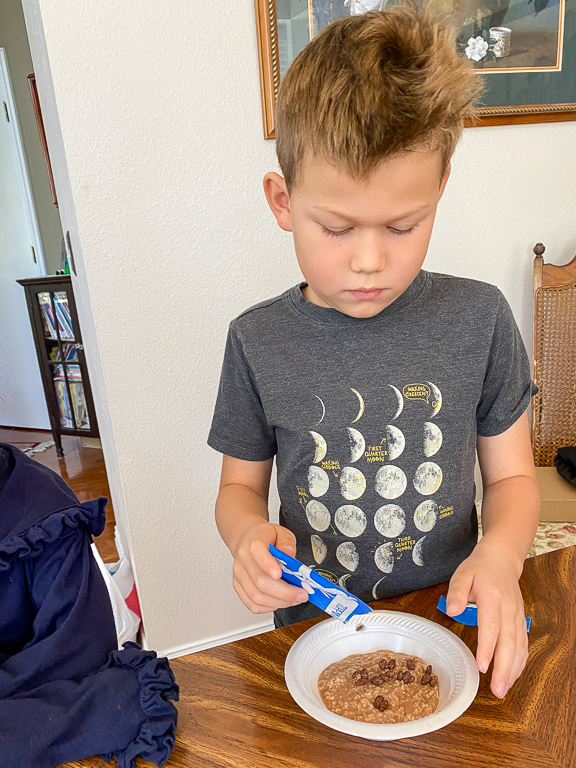 Theresa had an interesting comment regarding the toppings that are added to the Cocoa Puffs.
Theresa - They look like turds.
Eww. That's not a good start to your morning. 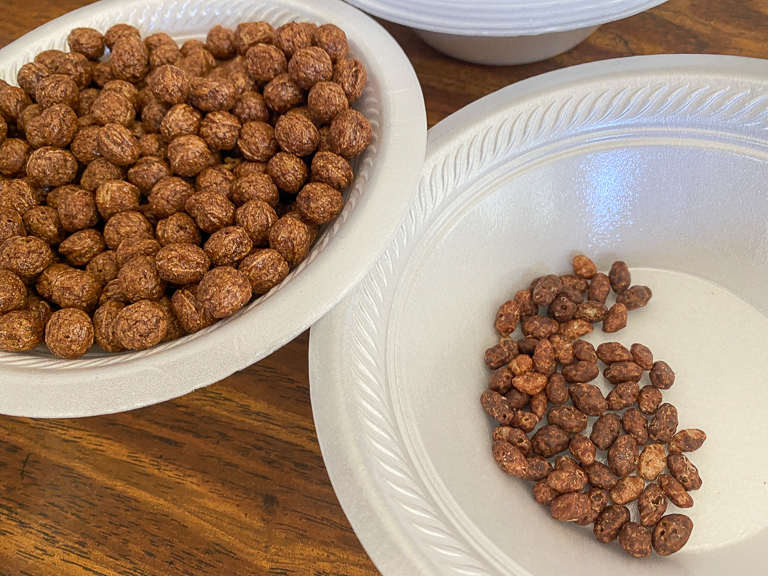 It reminded me of the hilarious quote from the movie Happy Gilmore. 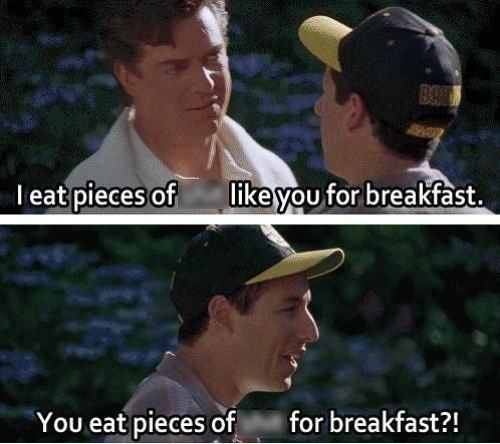 The Cinnamon Toast Crunch Oatmeal has a Cinnadust topping. We've tried Cinnadust before since they started selling it in the spice aisle by the bottle! 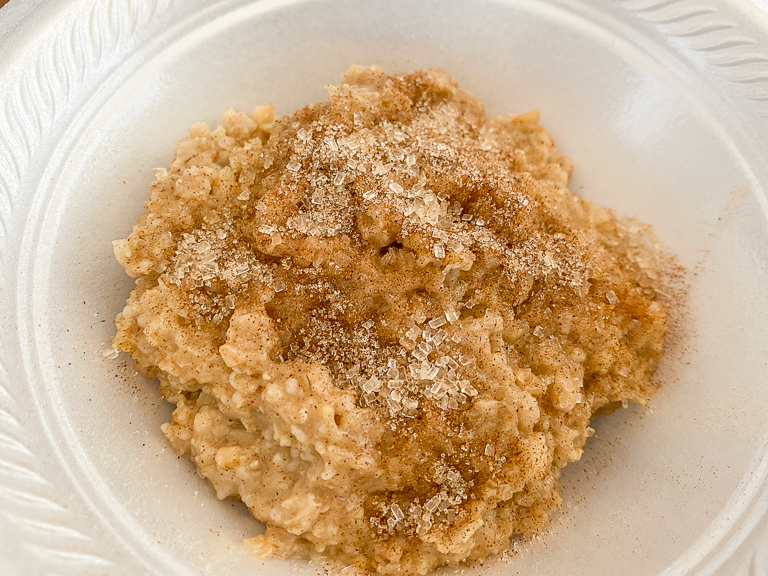 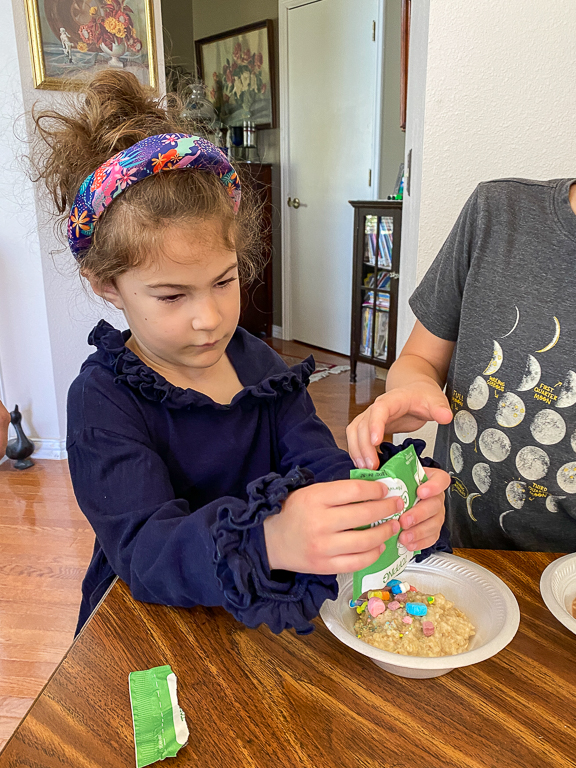 And the Trix Oatmeal has a "Colorful Crunchy Topping". 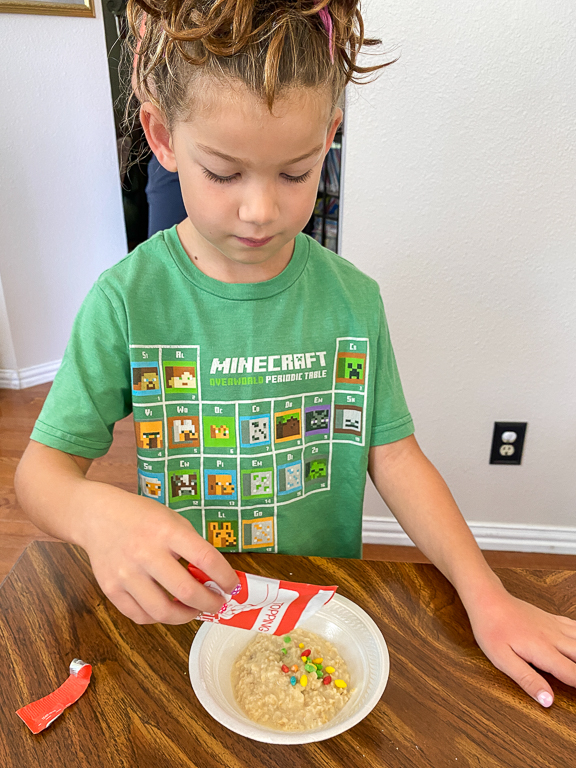 Before we dig into the tasting, which do you think is going to be your favorite?
Ian - Lucky Charms Oatmeal and Cocoa Puff Cereal
Avery, Joe, and Patrick - Cinnamon Toast Crunch Oatmeal and Cereal 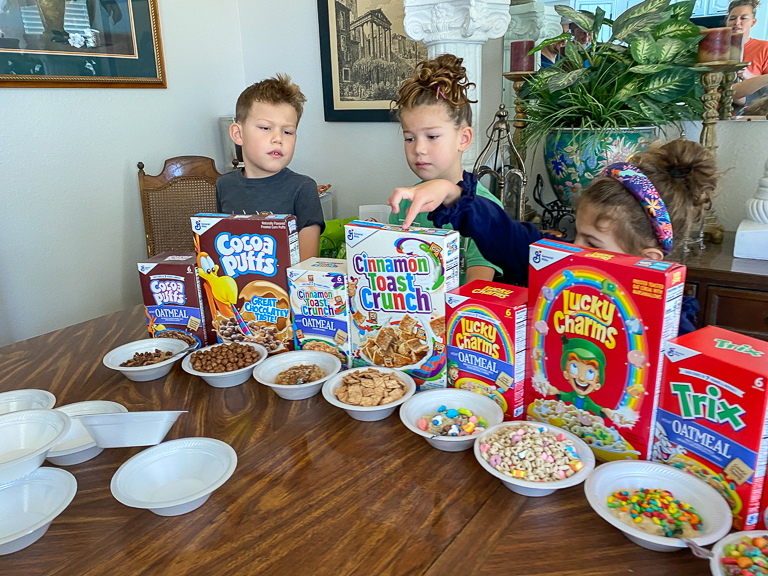 Let's start with the Cocoa Puffs Oatmeal! Here's what you get in the box along with the serving size that it makes. 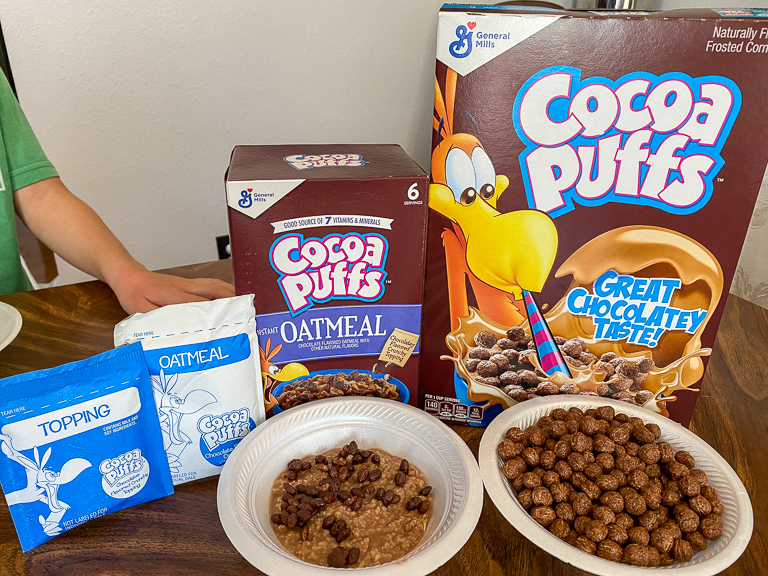 Ian - Ready... What is that? So bad!
Mickey - It's not super sweet.
Patrick - Like a granola bar.
Sheila - Kinda blah.
Theresa - The cocoa with the oatmeal (gags). 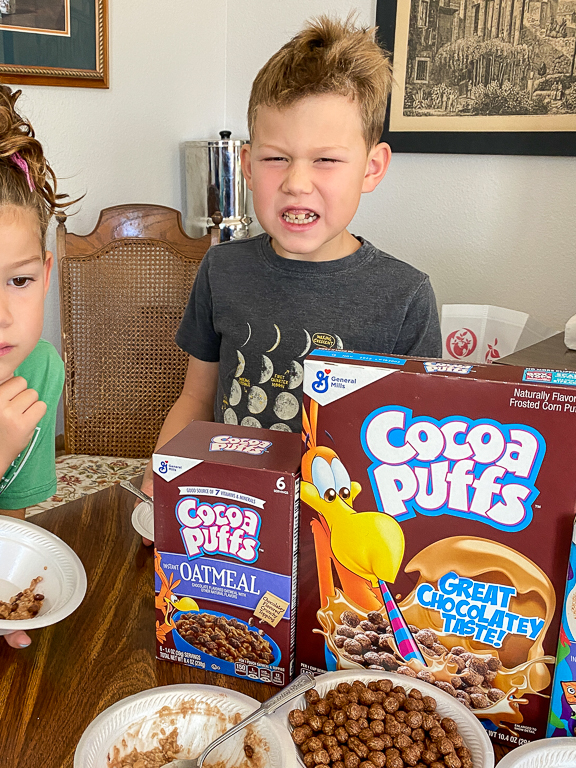 Avery finished hers, but gave it 100 thumbs down.
Theresa - Not good.
Ian - Can I throw mine away?
Theresa - The crunchy chocolate topping has a little bit of a sugar coating.
How about the cereal?
Theresa - Definitely better than Wendy's Frosty cereal.
Avery - I like the crunchy cereal, but not the oatmeal part. 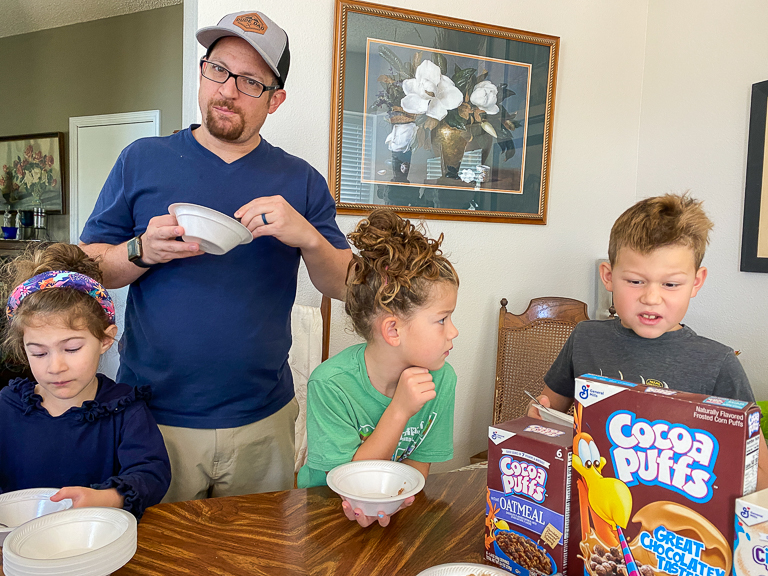 Well, that wasn't a good start. Let's hope the Cinnamon Toast Crunch can improve on things. 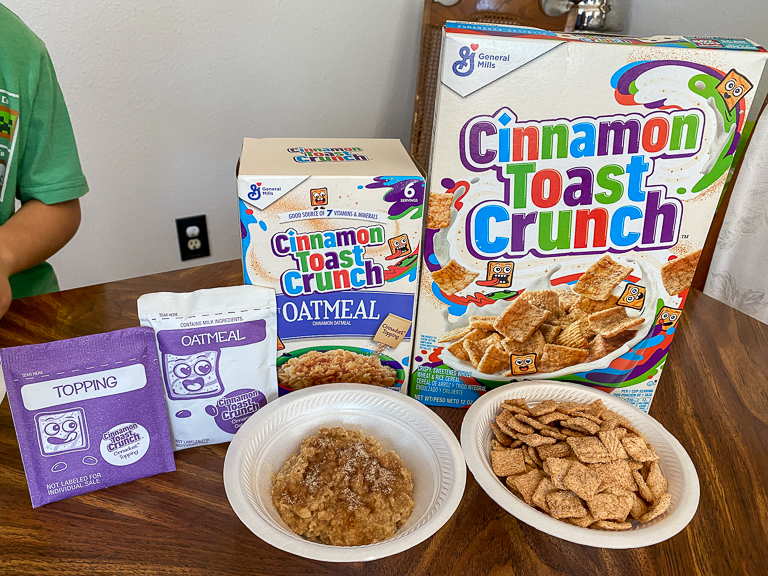 Theresa - The oatmeal tastes like glue. But cinnamon glue!
Patrick - Much better than regular glue.
Avery - I give it a million plus 100 thumbs up.
Mickey - Tastes a lot like the cereal.
Ian - It's okay. It tastes way better than the last one.
Joe - I like the oatmeal.
Alli - It might be the best oatmeal I've every had.
Theresa - Mommy needs to make you some good oatmeal. 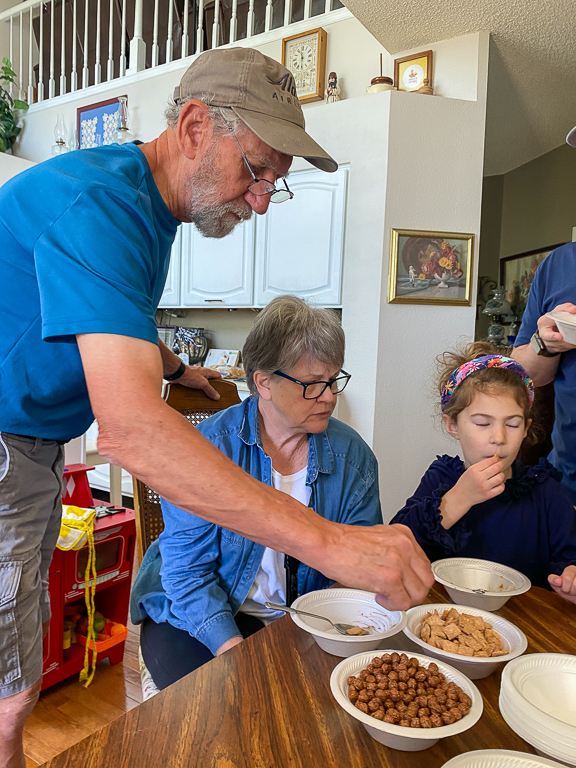 And the cereal?
Ian - The Cinnamon Toast Crunch Cereal is way better!
Mickey - It's crunchier.
Everyone thought the cereal tasted better. 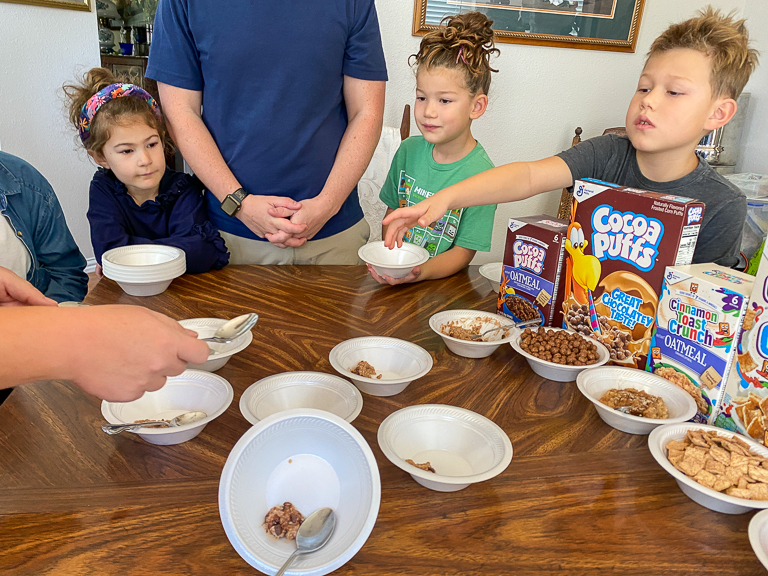 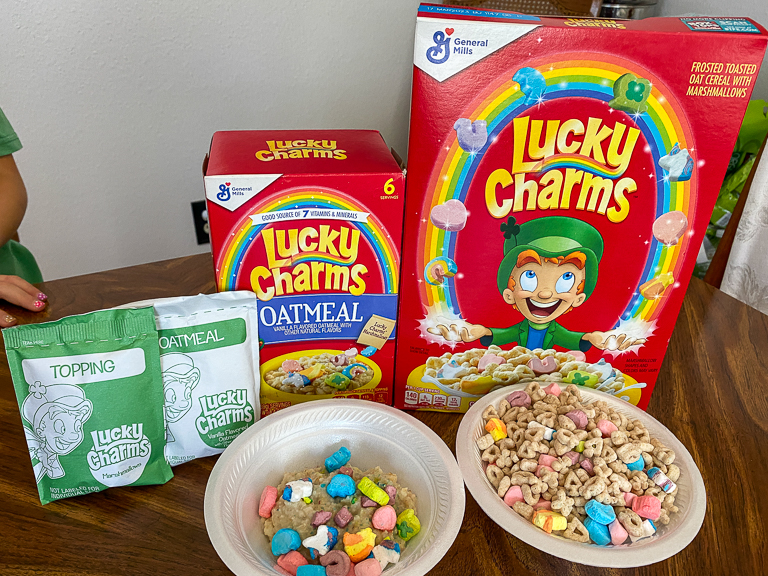 Theresa - That oatmeal is super sweet! It definitely tastes like marshmallows.
Sheila - The best of the three so far.
Mickey - That's too sweet. That's sticky sweet. 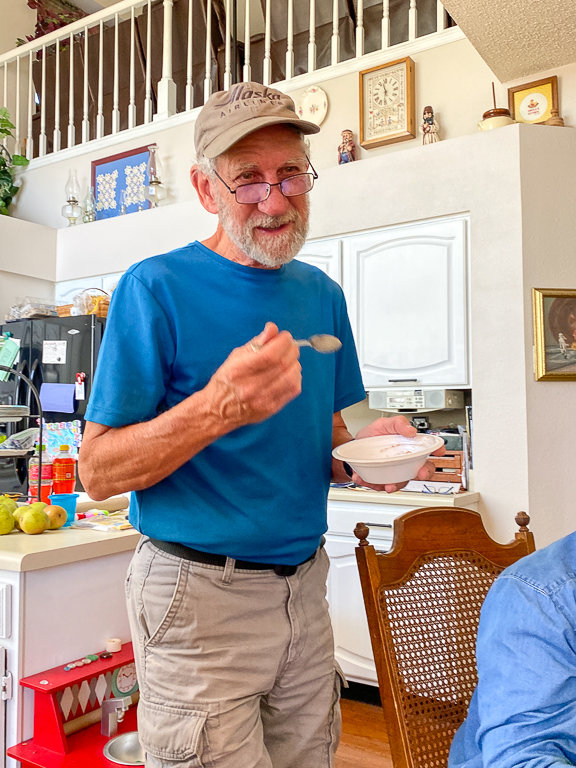 Avery - May I have some cereal? Thank you Gram.
Joe - Do you always pick out the marshmallows?
Patrick - I would always save the marshmallows for last.
Theresa - I don't like the freeze dried marshmallows.
Mickey - I love them! 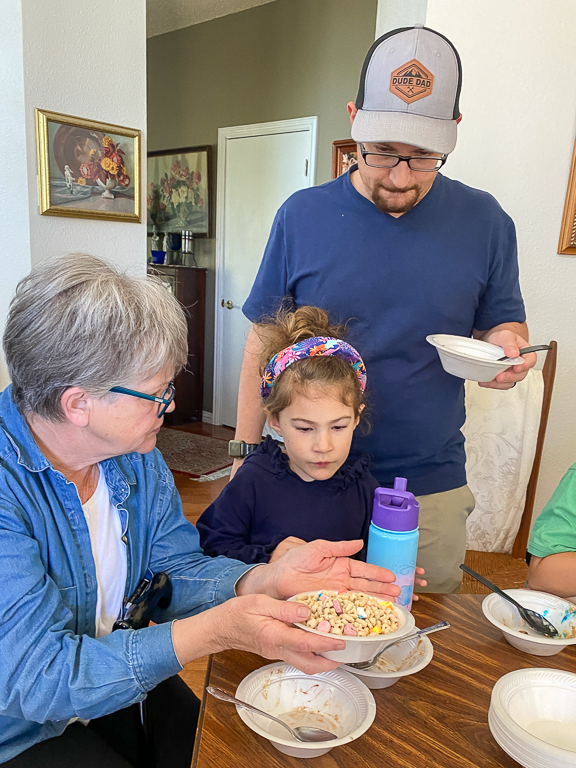 Last up, we have Trix! 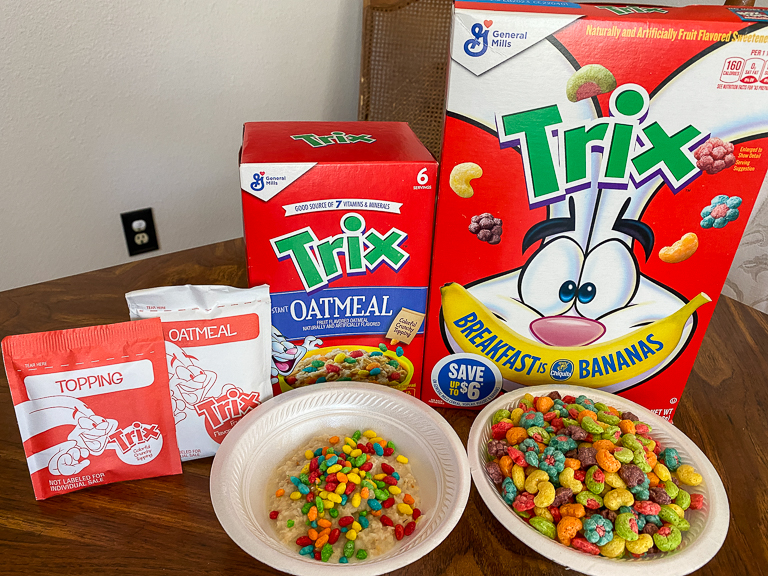 Sheila - It looks like candy.
Ian - Best one so far. Tastes like Fruity Pebbles.
Sheila - Not a fan.
Joe - I'd say it tastes like Trix.
Theresa - It does. But it's bad. 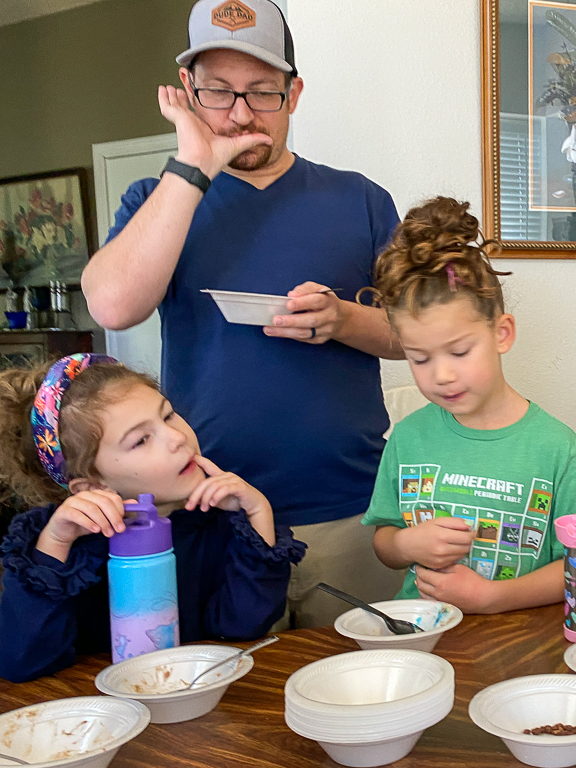 For some reason for us, the crunchy topping on this one tasted humidified and stale. I ripped open another bag of Trix topping and they were the same. Having these crunchy toppings be chewier toppings definitely took away from the experience.
The Trix cereal itself is good. 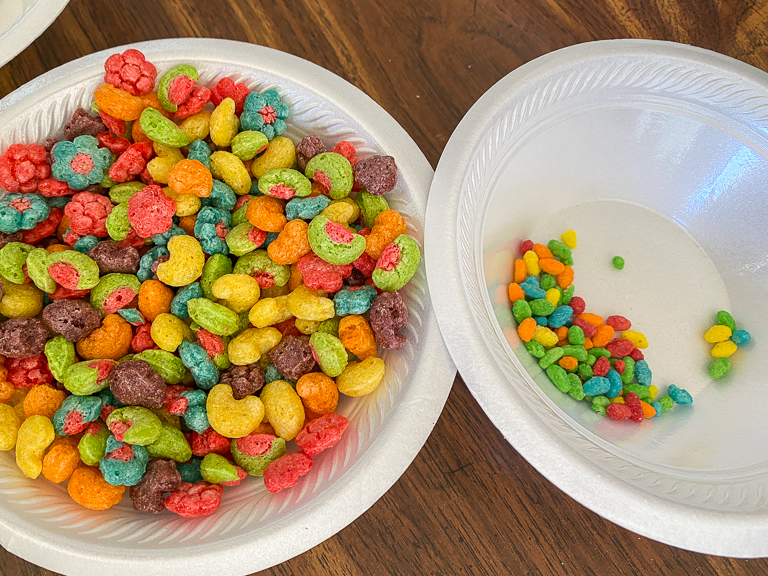 Theresa - Does anyone want a whole bowl full of anything now?
Everyone - NO!
Time for the favorites!
Alli - Cinnamon Toast Crunch Oatmeal and Trix Cereal
Ian - Trix Oatmeal and Lucky Charms Cereal. Least favorite oatmeal was Cocoa Puffs.
Joe - Cinnamon Toast Crunch Oatmeal and CTC Cereal
Theresa - CTC Oatmeal. Trix Cereal. All the other oatmeals were my least favorite. I never want to put them in my mouth again.
Mickey - CTC Oatmeal. Cocoa Puff Cereal. Least favorite oatmeal was Cocoa Puffs. All the cereals were good.
Sheila - Lucky Charms Oatmeal. CTC Cereal. Least favorite Cocoa Puffs cereal and oatmeal. I like chocolate but didn't like that.
Avery - CTC Oatmeal. CTC Cereal. Lucky Charms oatmeal was disgusting. And the cereal.
Patrick - Trix Oatmeal if the topping wasn't stale, but as is, CTC Oatmeal. CTC Cereal.
Theresa - Try Trix Oatmeal with Trix cereal.
Joe - Does anyone like oatmeal better than cereal?
Everyone - No!
Okay then. Good try oatmeal, but you don't win today.
Sheila - I liked the Cheerios taste test better.
Mickey - They did a good job matching up the oatmeal flavors to the cereal. 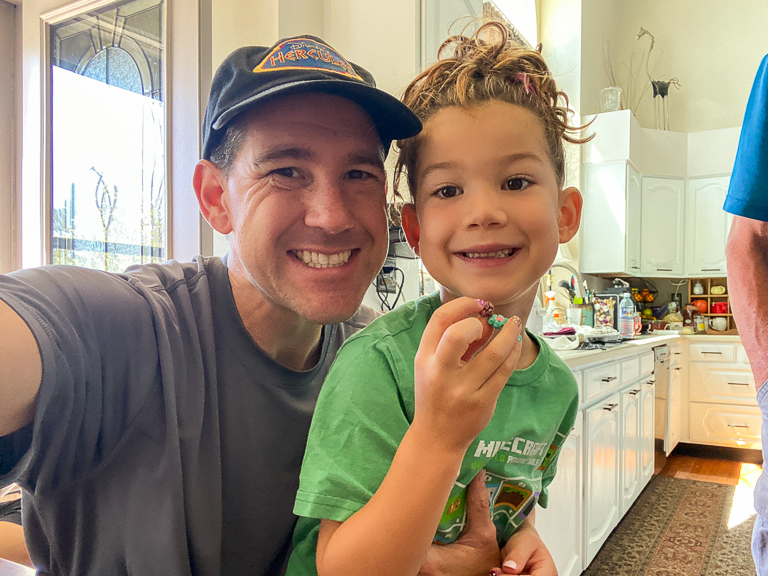