We have had a great time together hanging out Gram and Pop Pop as they came to visit us in California. Exploring Disneyland together has been awesome and I love all the time we got to spend together.

Let's close this one out. 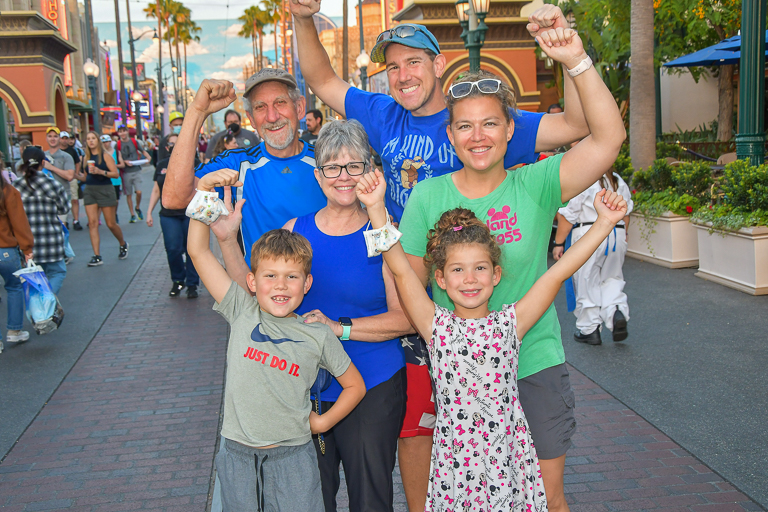 Ian loves the rides that drop you, and I love that he loves them. They're my favorite too. Before we leave, we have to go on it one more time. I love the high energy from this ride and I'm really looking forward to going on the new Guardians of the Galaxy ride back home in Florida. 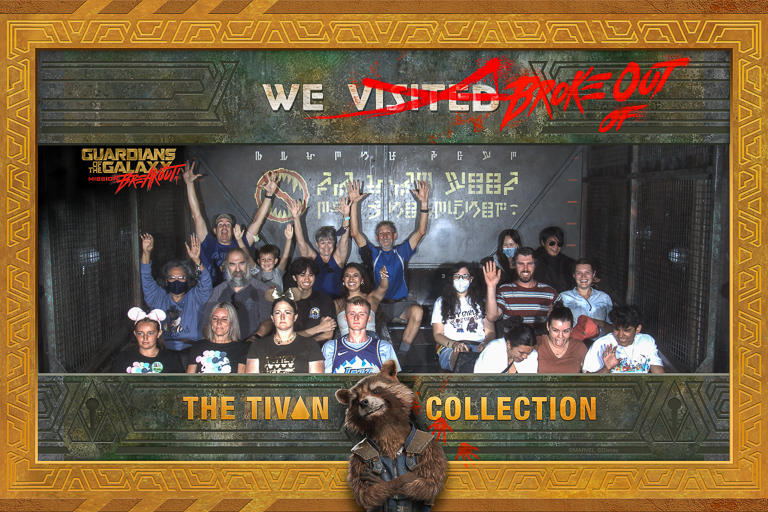 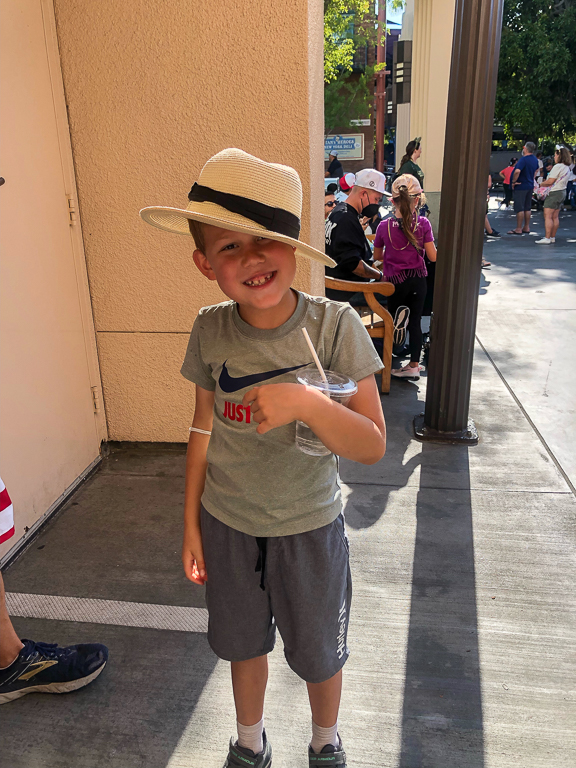 Before we take a break for a snack, let's see how they make our sourdough bread. I love that they still hand out samples to snack on while you watch the process of how they make it. 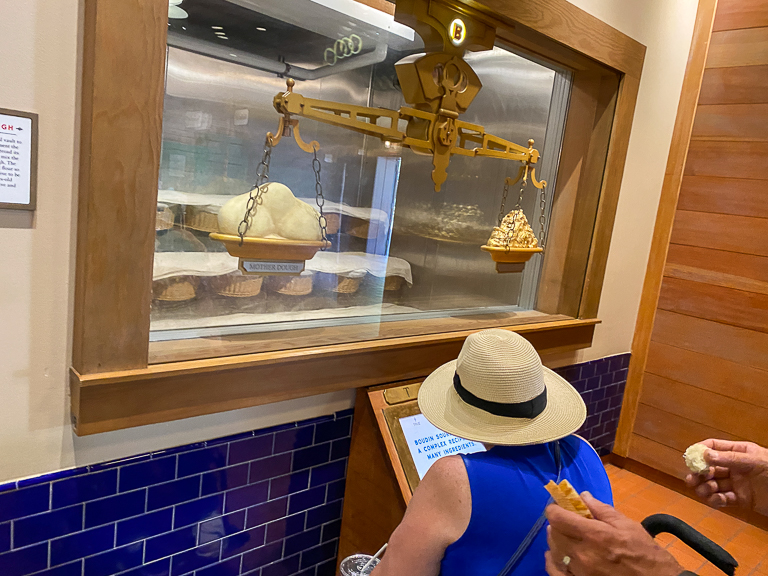 I'm still amazed at how inexpensive this filling snack is. Just $6 for a sliced loaf of bread and all the butter you want. It's such a good treat that everyone enjoys that we ended up buying two loaves. 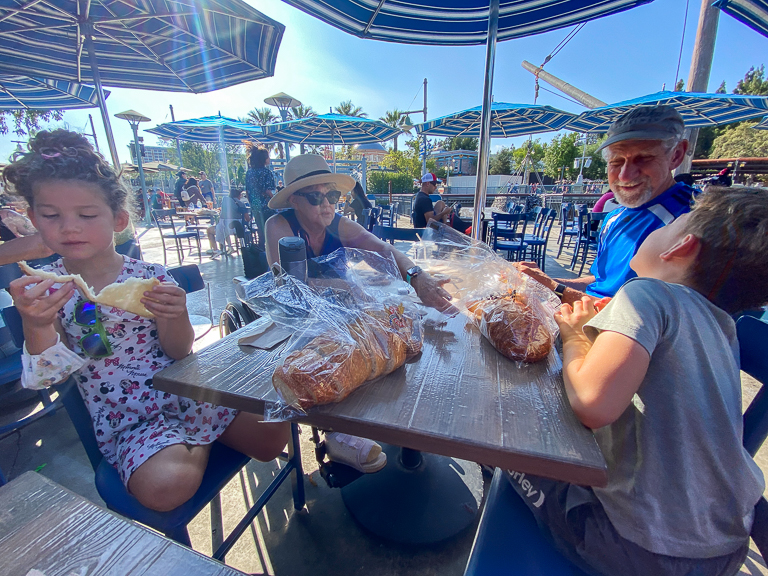 The kids think it's super tasty, though they only eat the middle part and save the crust in a pile for later.
Pop Pop loves the crust though and started to eat it.
Gram - Where is all that crust going?
Pop Pop - I ate it!
Gram - That was for the ducks!
Pop Pop - Quack quack! 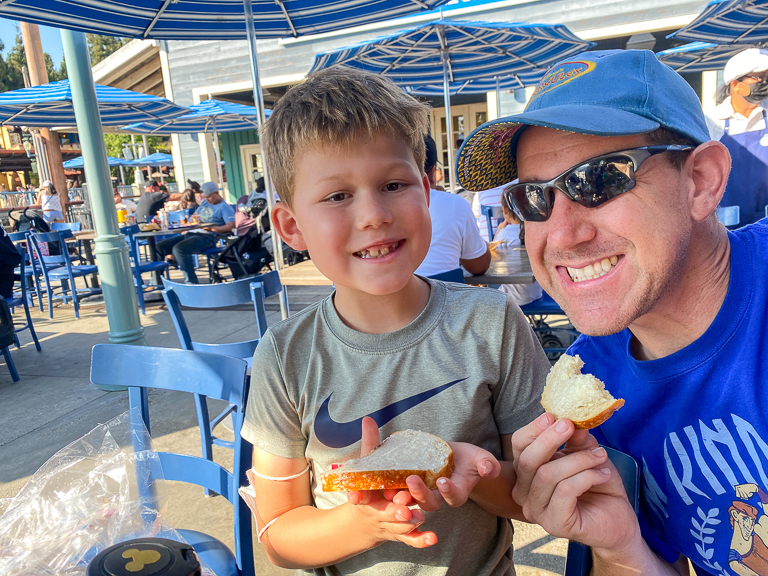 The kids still had some left though to throw. 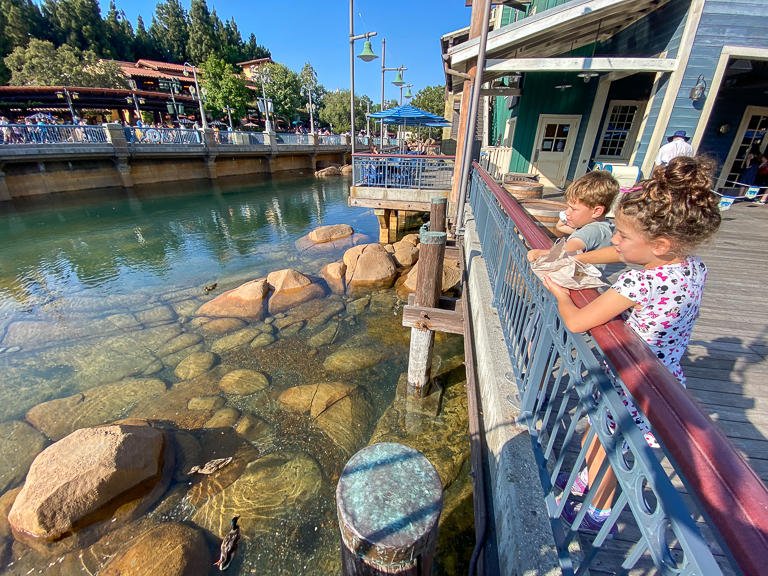 And even better, to share. I love how thoughtful they can be. A few kids came up to see what they were doing, and they were quick to share what they had. When they were all out of crusts and still more kids were coming, they ran back to the table to ask for more whole bread slices to share. Eh, it was for eating later, but you're right, this is a better use for it. Share away! How about another ride on Toy Story Mania? We really had good luck getting in all the major rides we wanted to go on in the 3 days we were here. I don't think anyone is feeling like they've missed out. 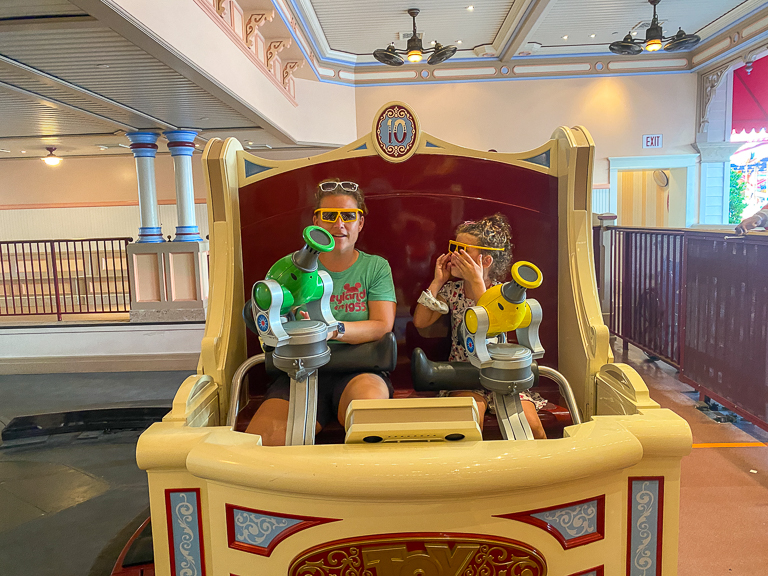 Ian and I rode together and we worked to get him his highest score ever! Nearly 160k! Not bad buddy! 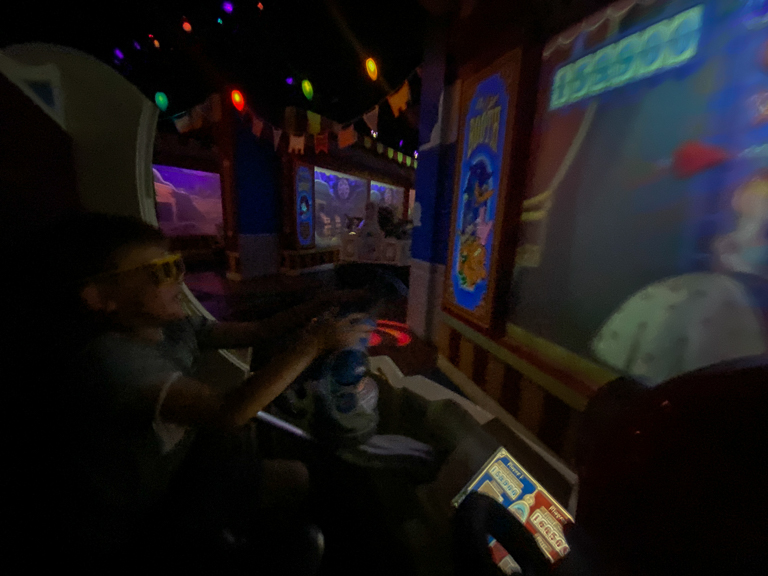 This is a ride that has a lot of repeatability. Even after watching guidelines and tips, I still don't know how some people are scoring 400k+ and 500k+. That's amazing. 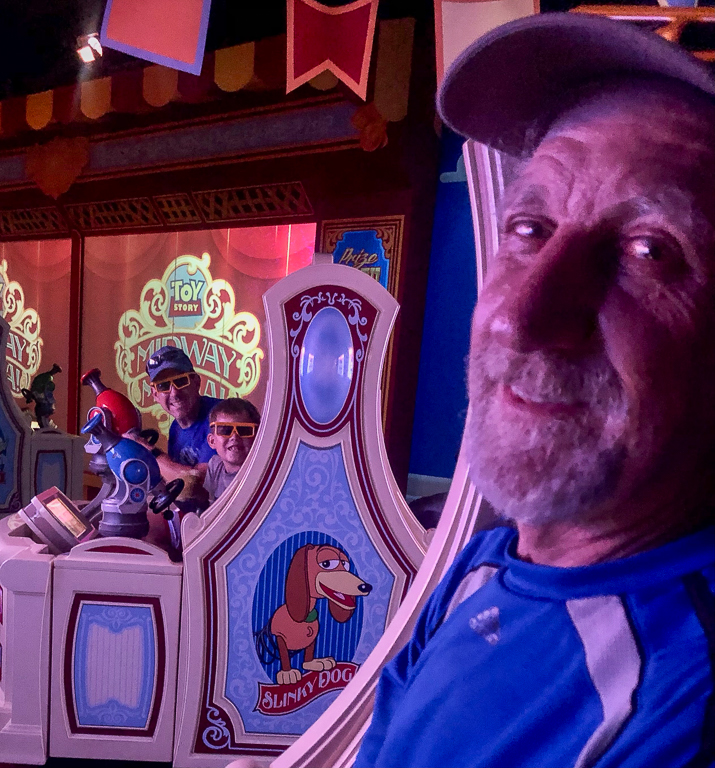 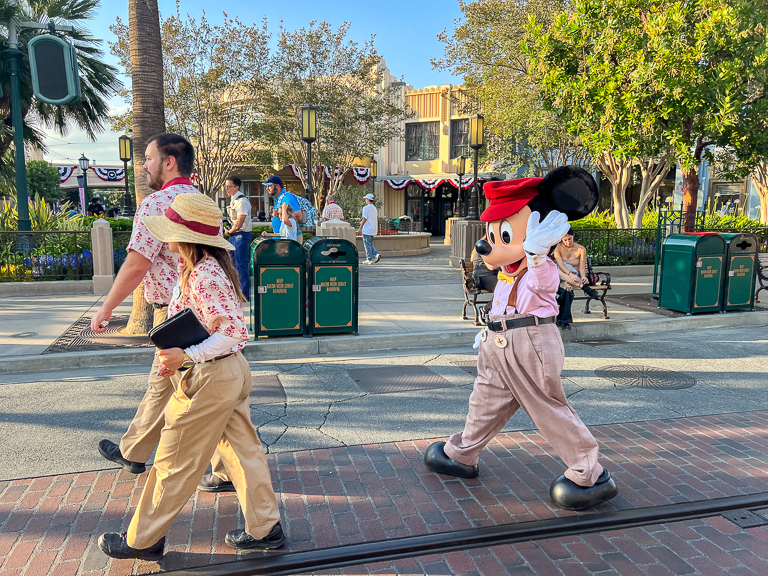 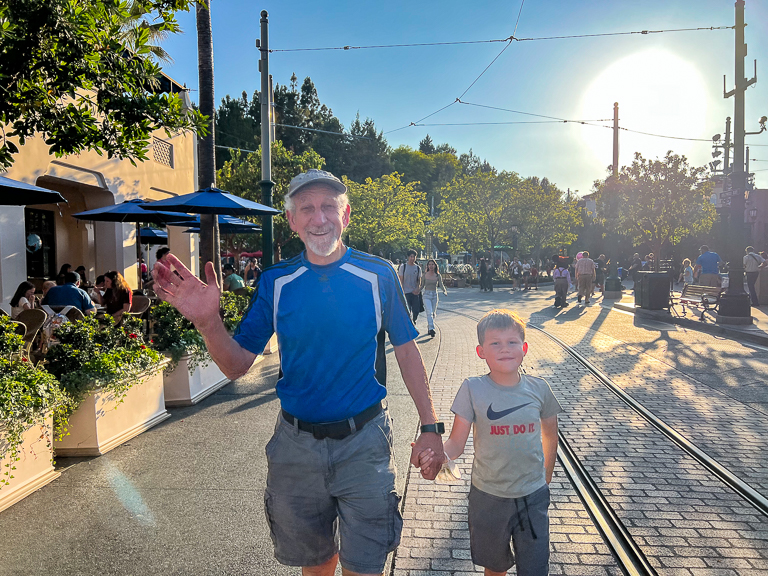 We've used a lot of our Genie+ reservations, and you can't repeat rides with it. What's left that we haven't done? Monsters Inc is cute. Let's try that. 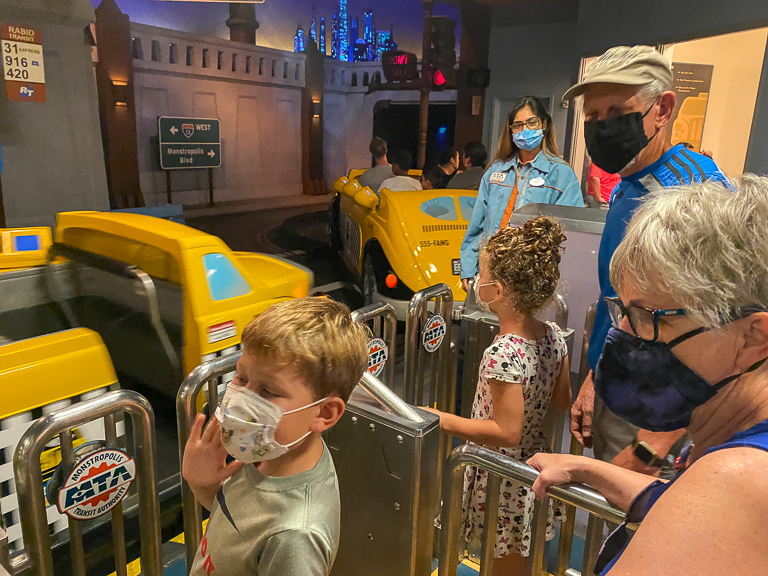 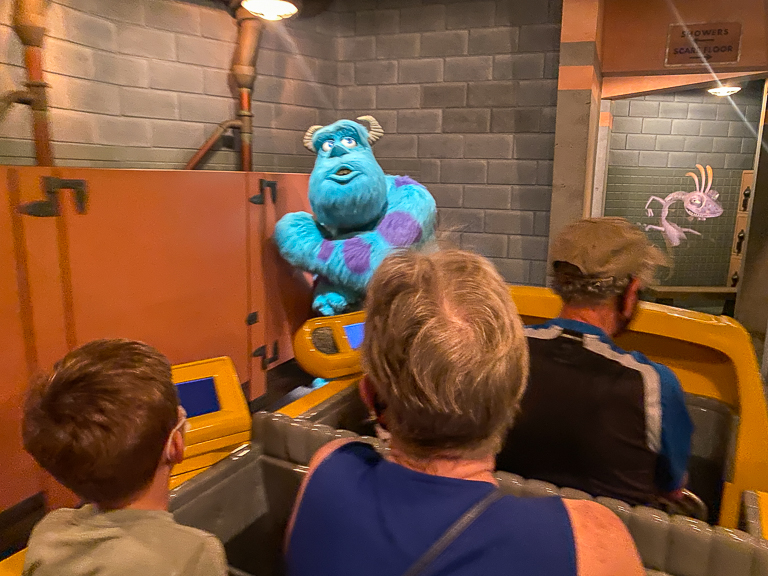 Apparently I was giving Roz eyes. I like that they have some interaction on this ride. 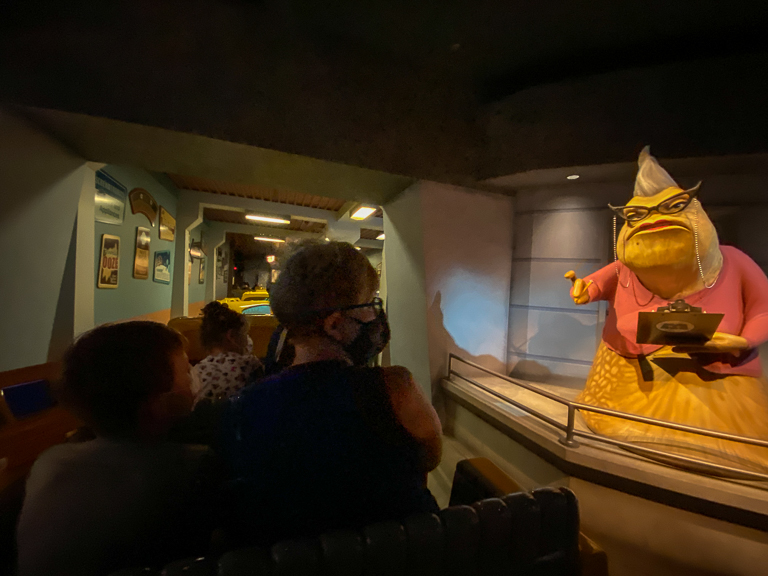 It's still relatively early in the day (7:45pm) considering what time we got here, but we're about ready to go. The grandparents need to get packed up and get to the airport early tomorrow, so we can't close out the park like the last couple days. What's a good ride to end on? Something we can all ride together. Soarin sounds perfect. 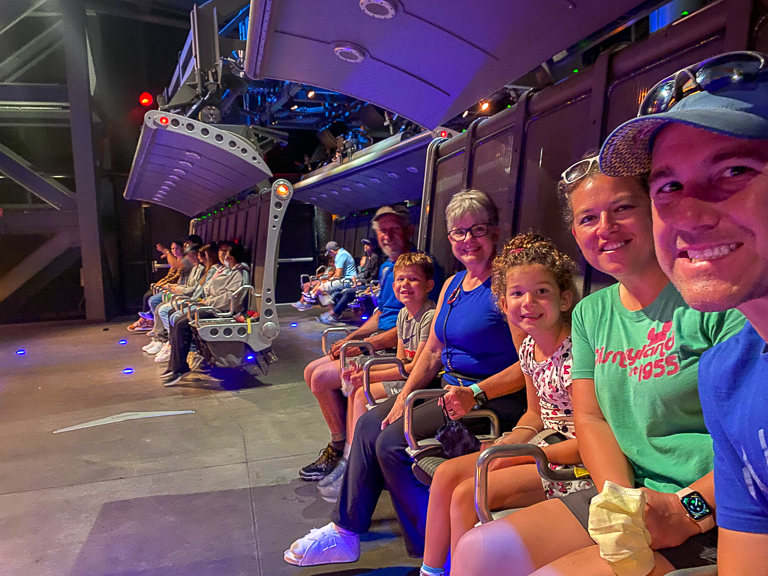 And we waited to get the best seat in the house. Top row, and look at that, dead center. Excellent. 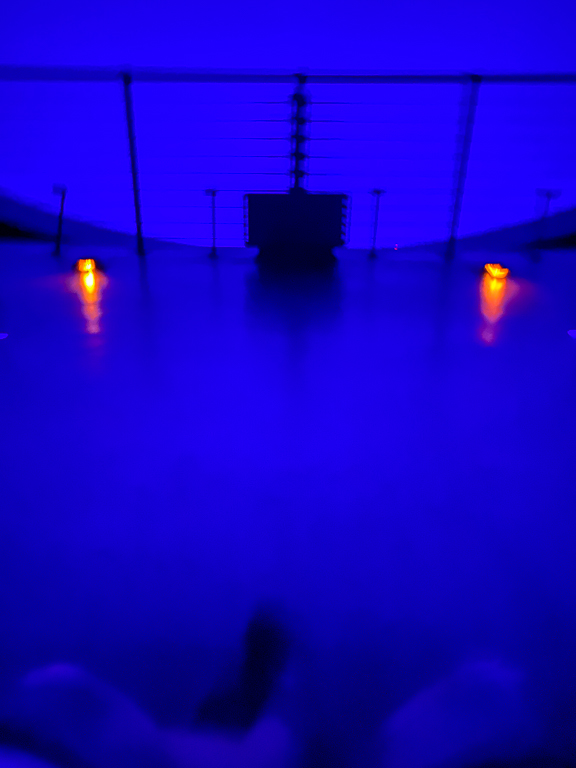 On the way out, I saw a Photopass photographer taking pictures of a family by the fountain. We patiently waited our turn, but when they were done, were told that that was their last family before they were done. Ah, well I'll get my own picture then. 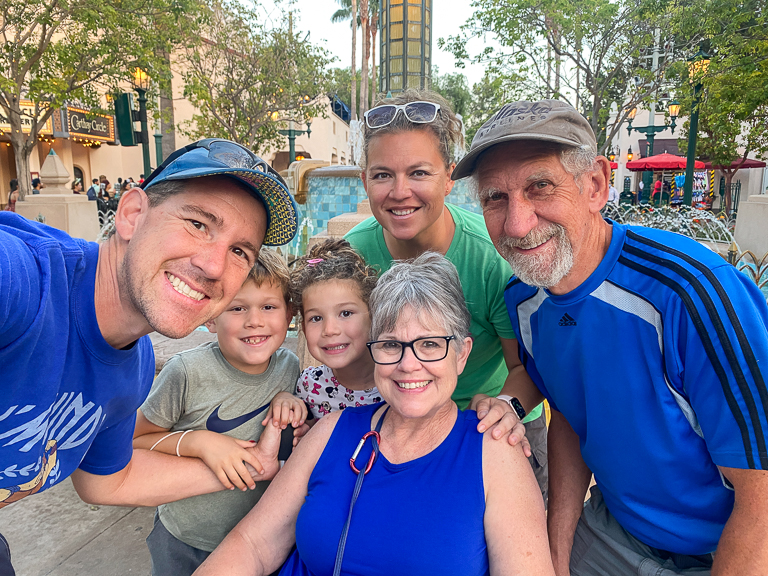 But then I was inspired to seek out another Photopass member to get a couple more shots. 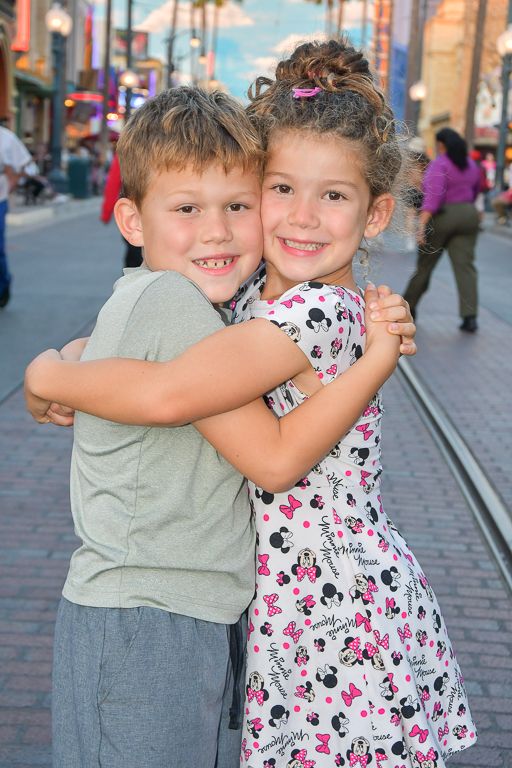 They have fun pose ideas. 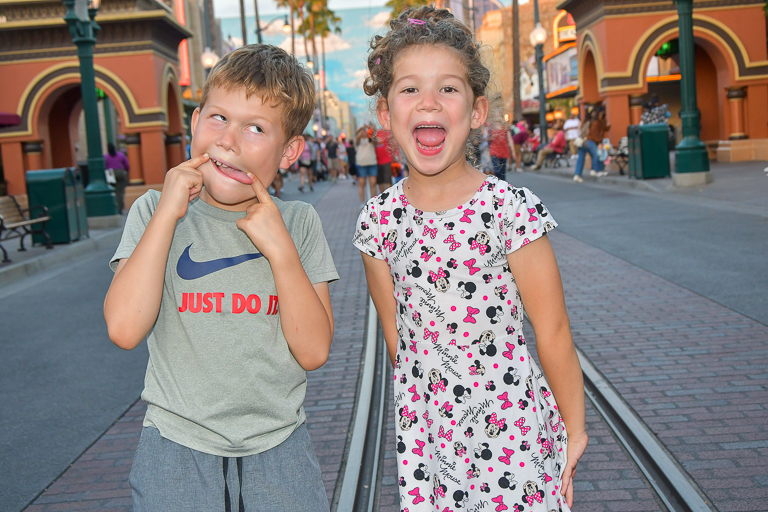 Love this family! I'm glad we got to get together! It's been a great visit full of firsts, a few laughs, and awesome memories. 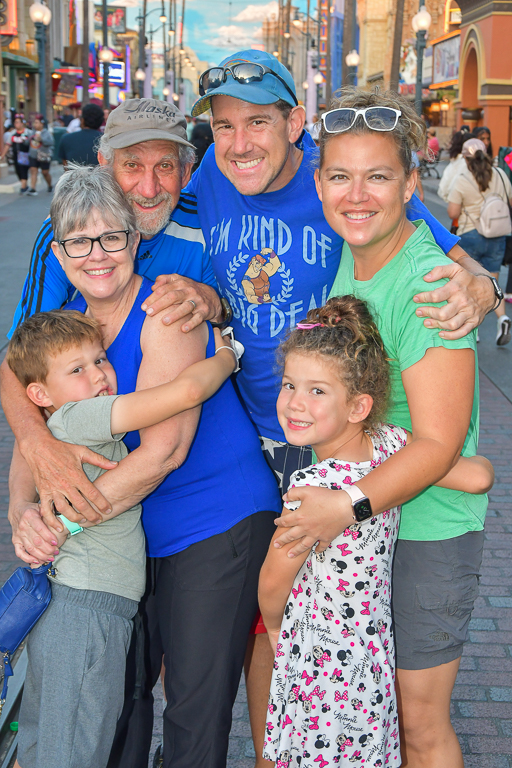