Anaheim has been great, but it's time to pick up stakes and move this wagon to the next destination. We're going from one magical place to another place that almost feels like it's magic. Let's go! 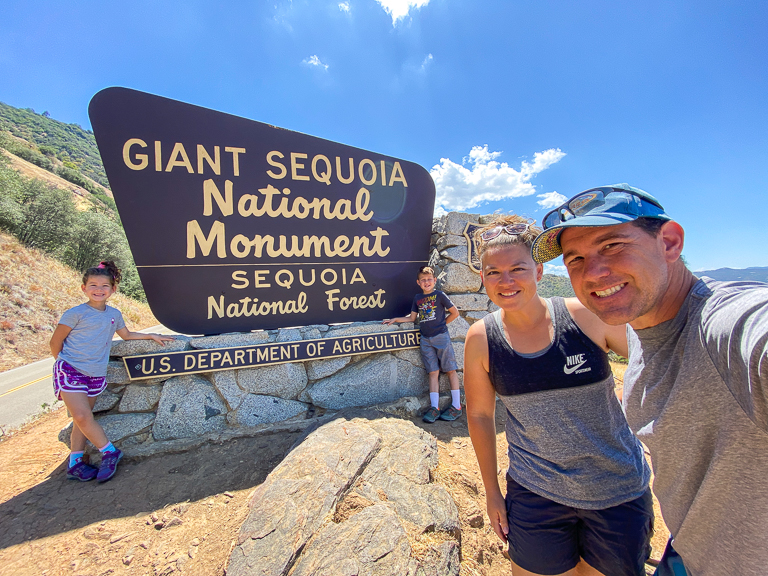 Leaving Orangeland RV was easy enough. I was looking forward to an easy and uneventful drive on freeways the entire time. And that's what I got. Mostly. There was one bit of excitement. 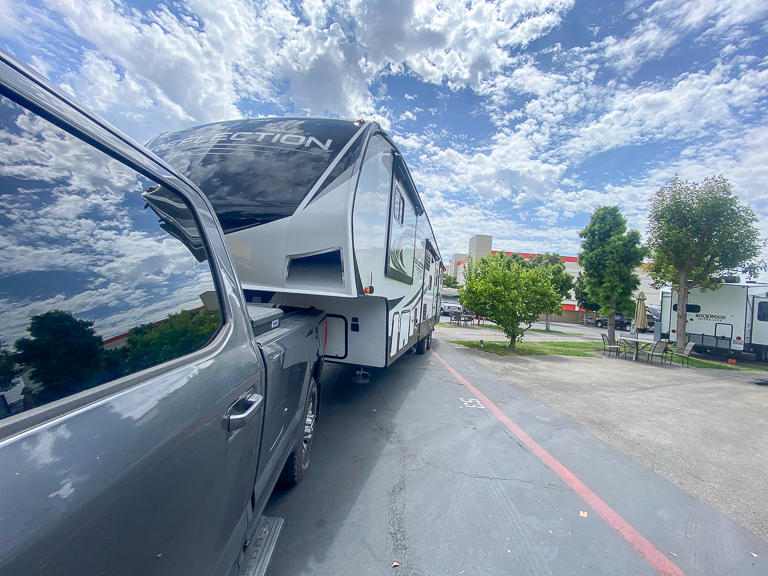 Driving on the 99 freeway, nothing particularly exciting happening, all of the sudden the air was filled with a bit of a HUMMM and then the power line next to the road sparked down to the earth and an immediate fireball started. It's surrounded by dry grasses so who knows if it's going to get out of hand. We called 911 who routed it to the local fire department. Hopefully things got handled!
While we're driving, I had the dash-cam recording for any interesting things that happen and this certain qualifies. You can see the brightness of the fireball light up our faces as we go by.
With no more excitement on the roadway, we soon found ourselves at the Sequoia RV Park/Kings Canyon Mobile Home Park. 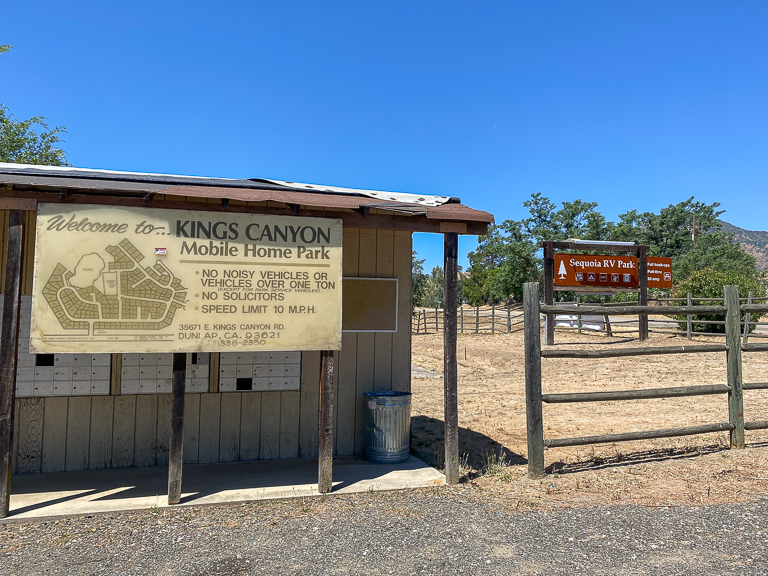 The roads here were nice and wide, which is always appreciated when trying to move Beauty around. 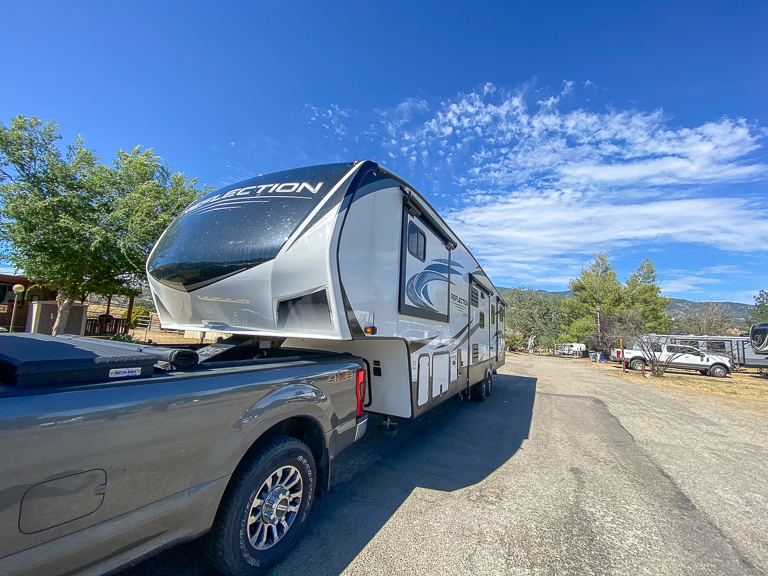 There's no one manning the office, so Theresa filled out our registration paperwork and we set out to find our spot. It's choose your own, so anywhere that looks good is up for grabs. 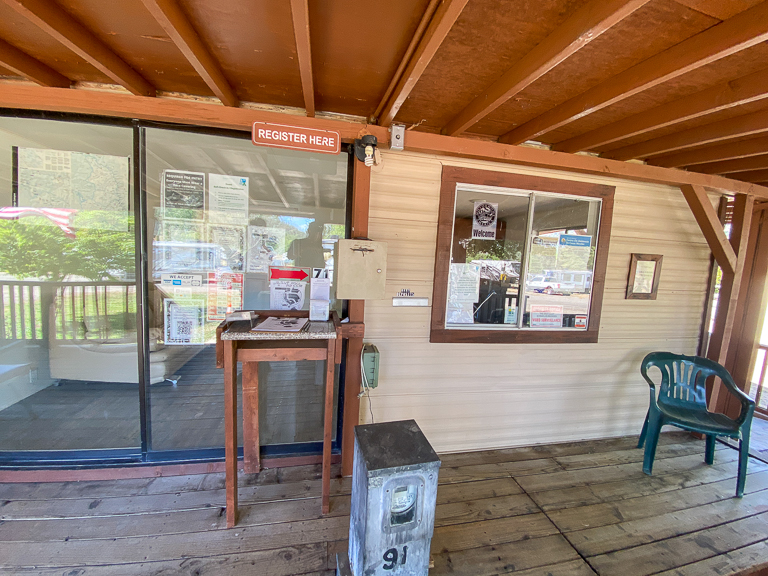 After a quick drive around, we found a spot that worked and I backed into it like a pro! 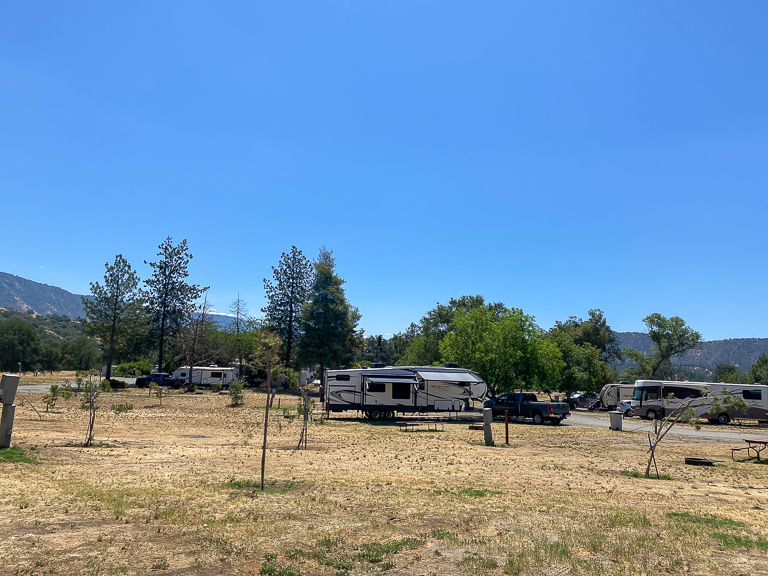 The only oddity of this site was the positioning of the power, water, and sewer lines. They were on the opposite side! I needed my extension cord for my electrical cable, plus all my sewer lines to reach it. Glad I have them both ready to go if I need them. 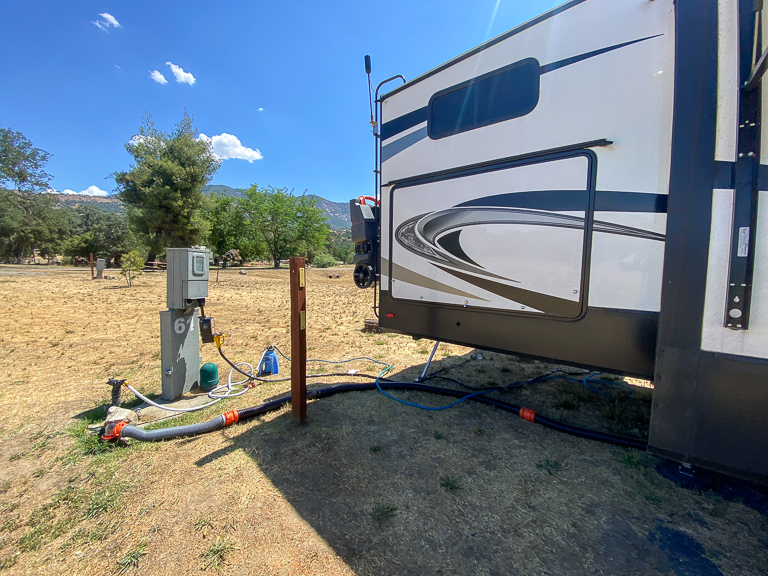 We're getting in relatively late, so we decided to go for a walk around the campground. There's not too much to see, but Theresa got a kick out of this sign. I don't think we could do any of those things. 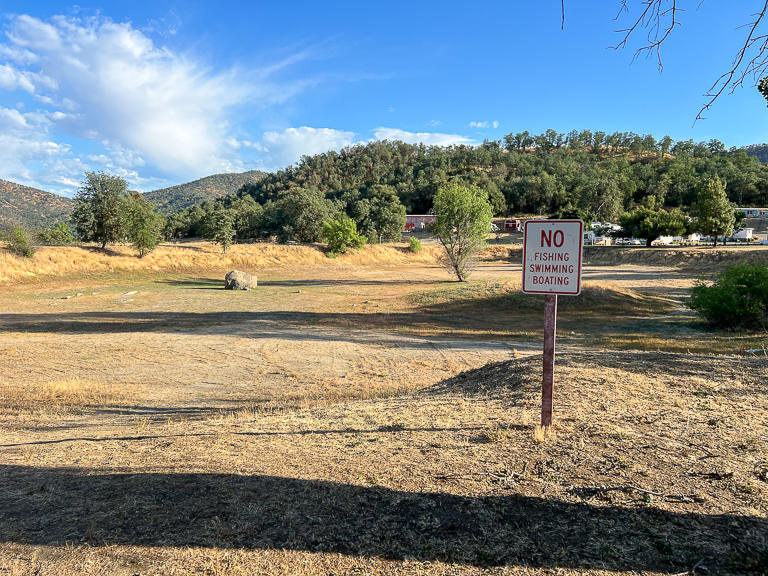 The kids and I also got out to throw the tennis balls around. Gotta work on that catching and throwing. On one such instance we had a bad bounce and it went down a gopher hole! It was too far for me to get out, and we spent the next couple days hoping it would get pushed out, but we had to leave with it still missing. 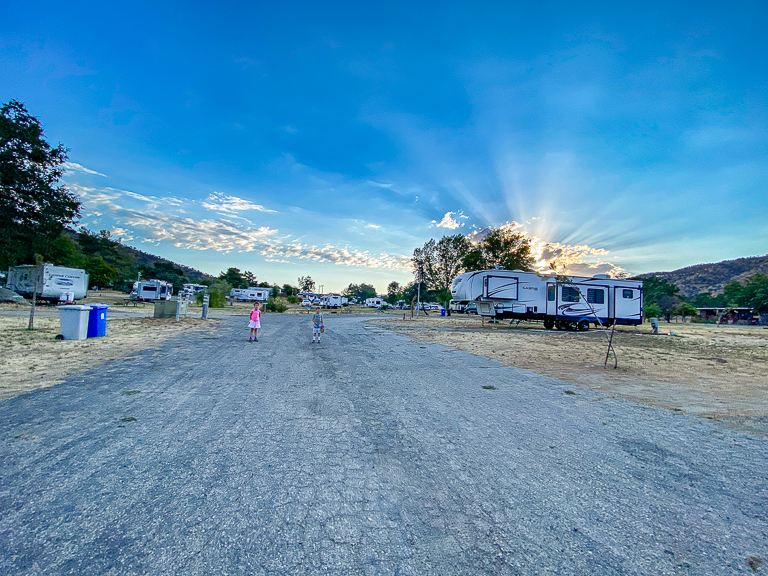 The next morning we got moving to go see our real reason to come here. Sequoia National Park! Our National Park Pass sure has come in handy this year. 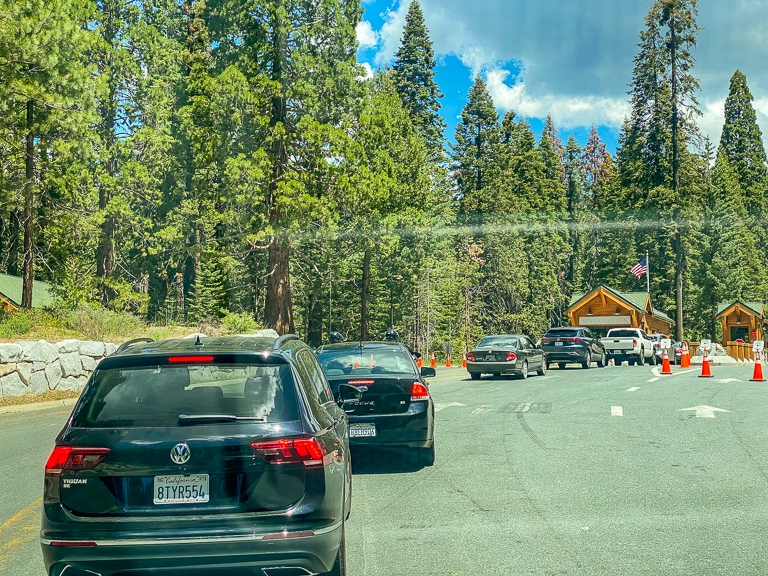 Our first stop has to be the visitor's center. Those are some pretty big trees already in the parking lot. 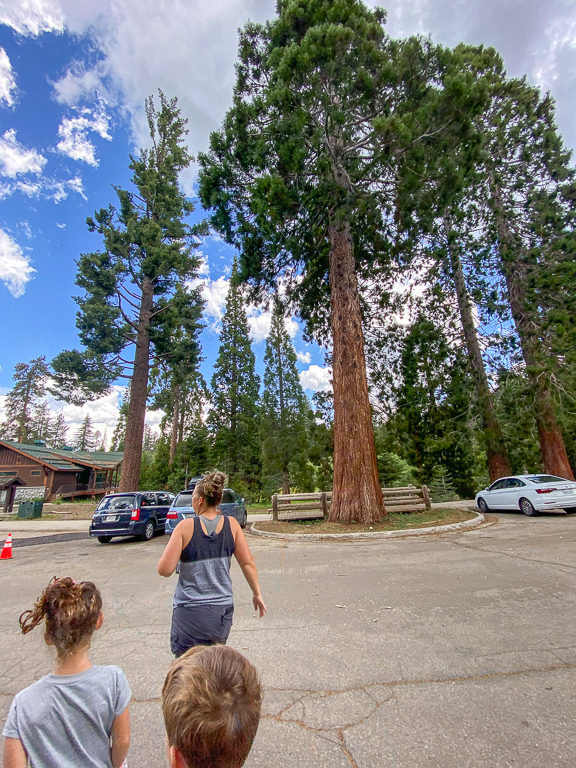 It's here that we'll be able to pick up our Junior Ranger guidebooks and earn our badge for Sequoias! 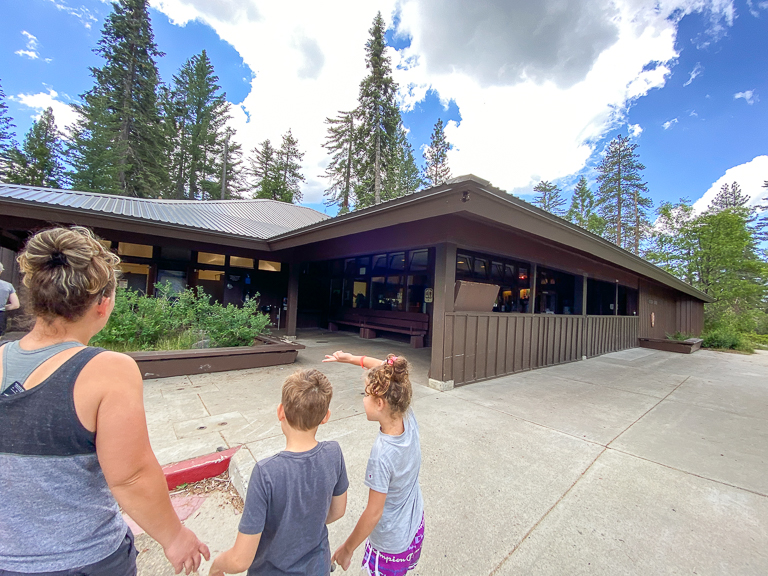 Inside the kids picked up their ranger booklets and we started to look around. It looked like bear fur, but on closer inspection it's a replica. 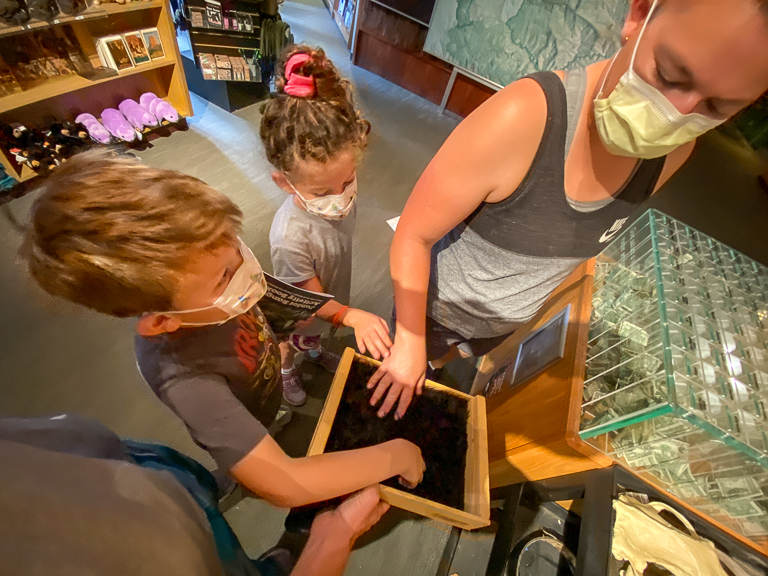 We've got a few different tasks to complete to earn that Junior Ranger badge. We found a section of the visitor's center that looks to be used for groups that visit, but it was unused at the moment. 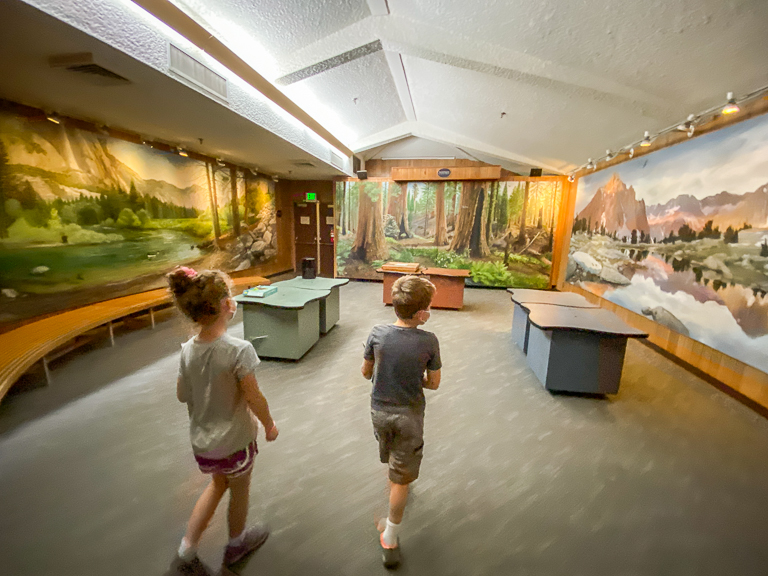 The kids went through the activities. 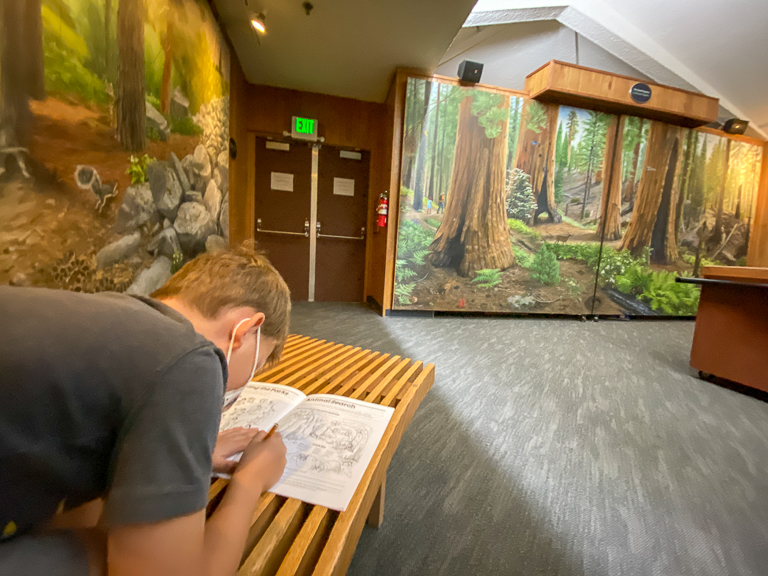 There's some giant paintings in here that are really well done. We played eye-spy trying to find all the different animals that were hidden. 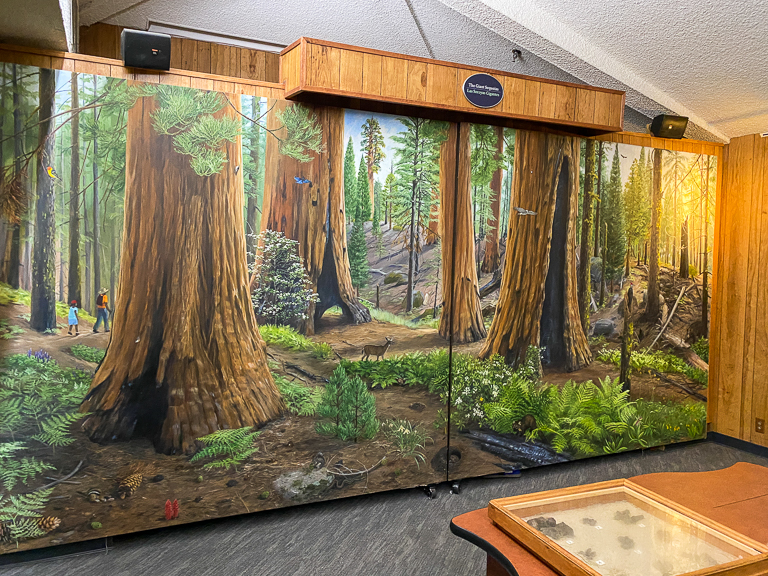 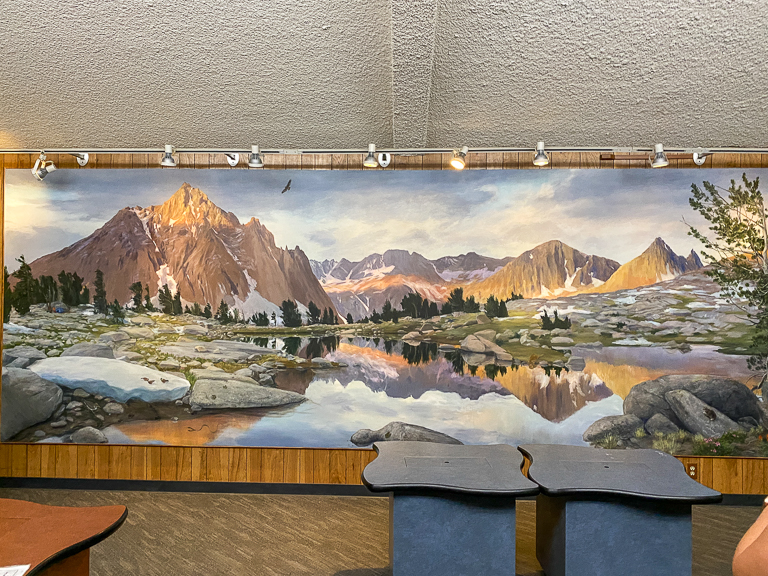 The kids found a puzzle. 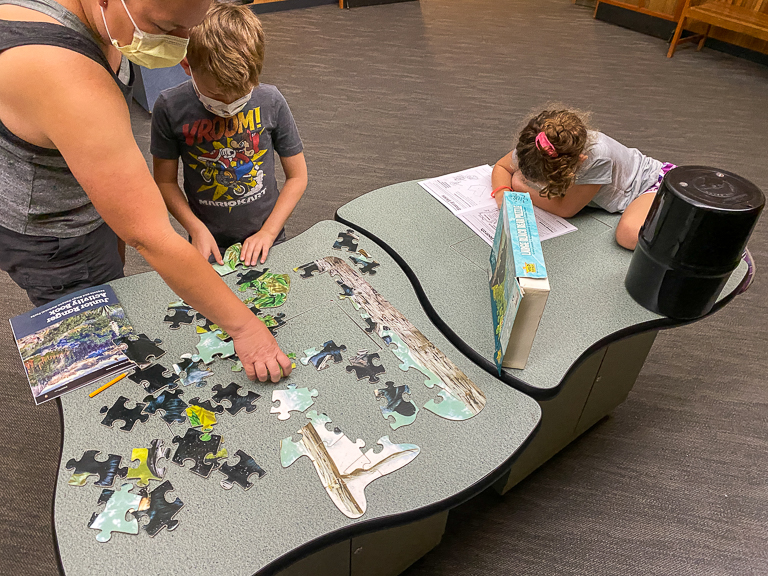 Turned out to be a black bear, and we also learned about food safety around bears. Bears can be especially clever, so if you're out and about, they need to be in a bear proof canister. 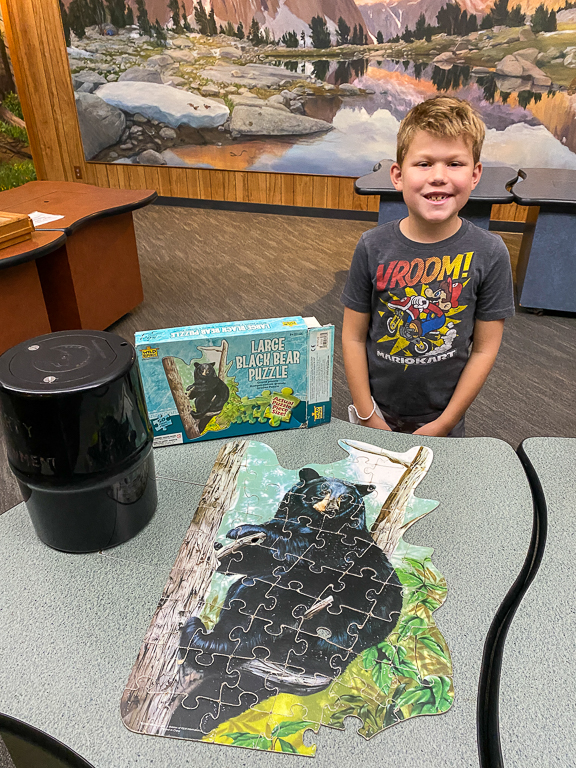 There was also an exhibit showing how to identify animals based on their scat. 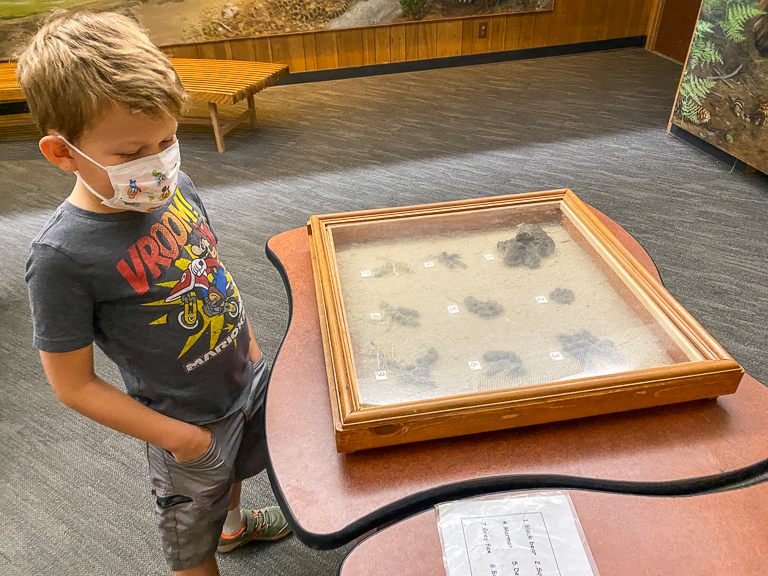 In lieu of a Ranger led program, which aren't being offered right now, the park does have a small theater showing information about the Sequoia trees and that will count. 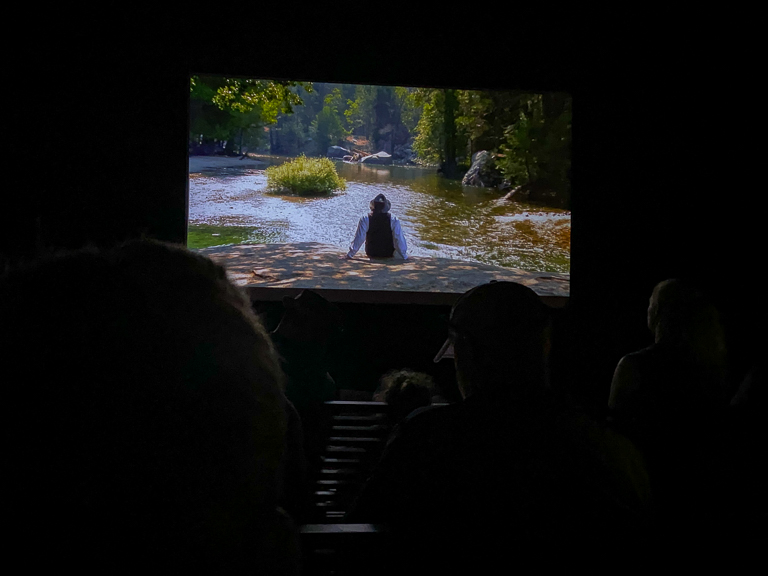 The kids got their booklets checked, then were sworn in. 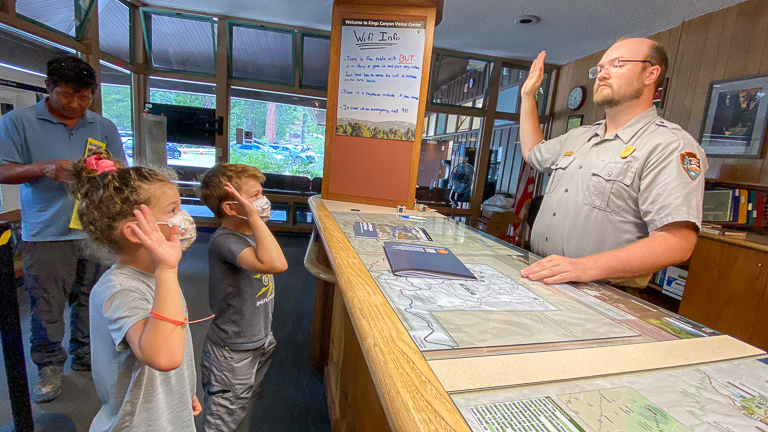 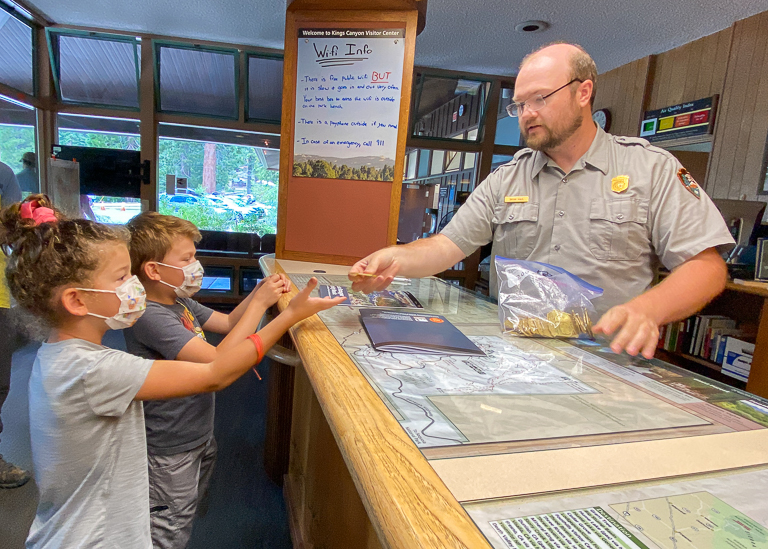 The swearing in! Ranger Bryan was great!
A closer look at that badge. 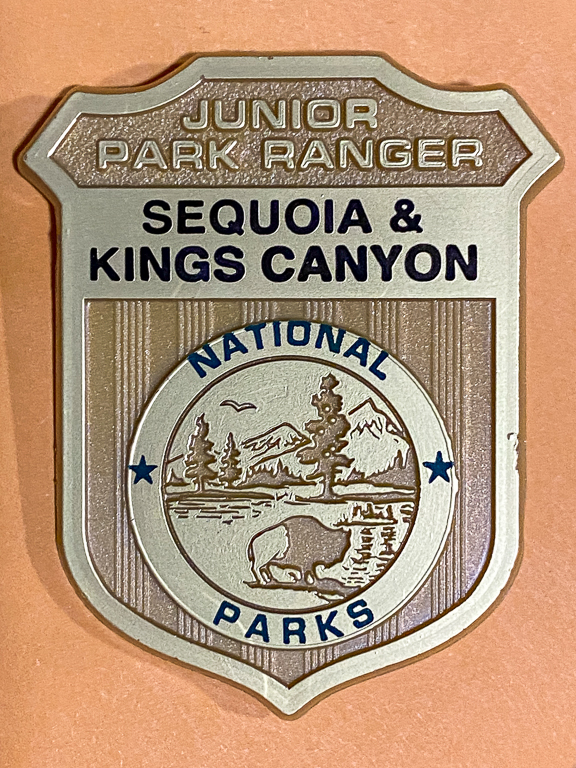 Of all the badges we've seen so far, this one looks the most like the National Park logo that you see everywhere. That might be because the tree on the logo is a Sequoia tree! 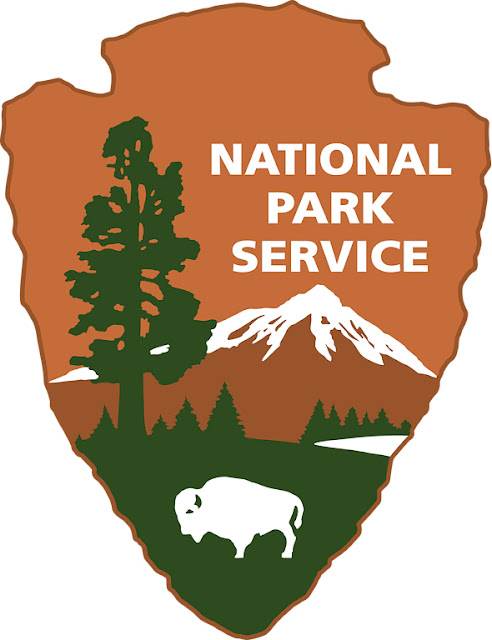 Quick stamp with the date on their Junior Ranger books, just because they can. 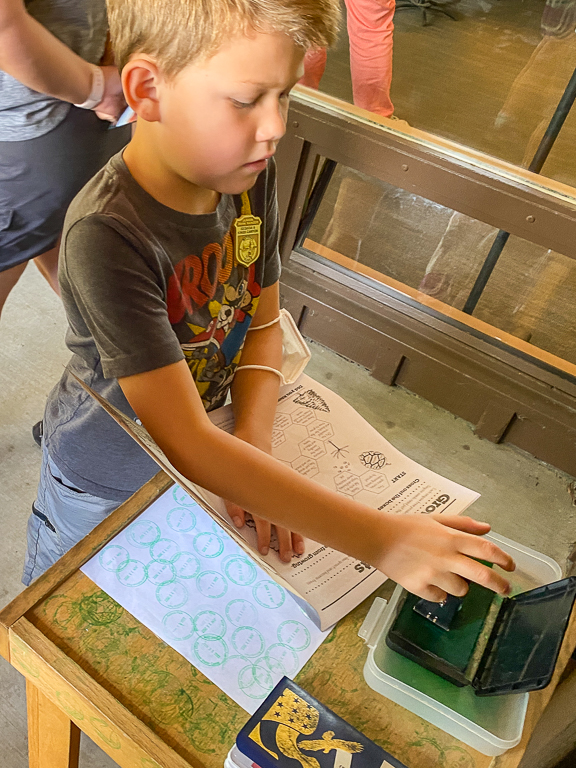 And Alli has a new friend that she's picked up. The fluffy raccoon has proven to be so fluffy that she couldn't stand it! It had to come home with her. But don't dare call it a trash panda. She will give you eyes if you do that.
So now we've learned all about these giant trees, but we need to go see and experience them for ourselves! Let's go! 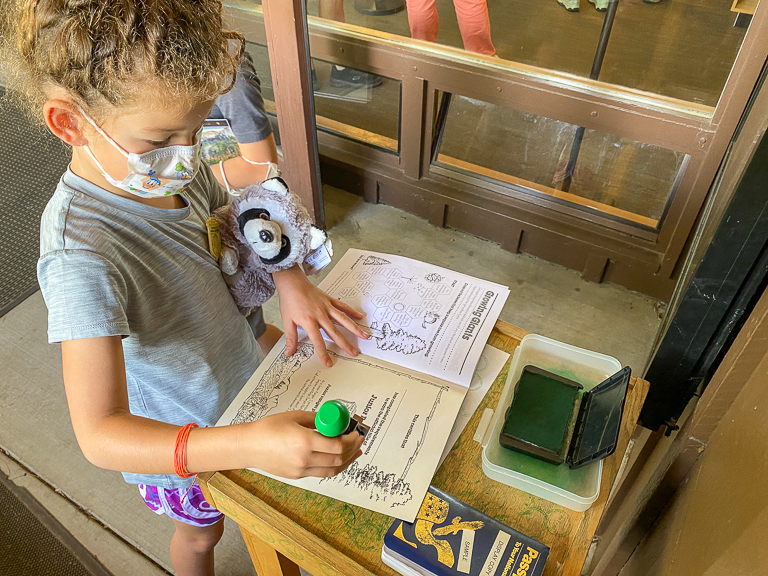