Now that we're back in Orlando, we get to go back to Disney World! We're very fortunate that Uncle Jacob is still out visiting from California! He's got an annual pass too, so as soon as he's done working, we'll all meet up at the parks! 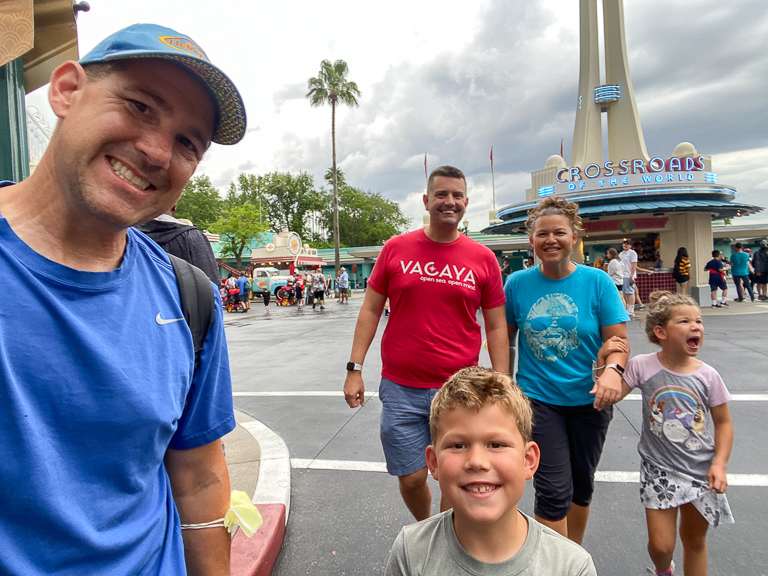 Since it's Spring Break time for many, the parks themselves are a little crowded. We've found that the best way to beat the crowds is to go towards the end of the day. You don't have the morning crush of people, plus guests are starting to leave for dinner, or sitting down to watch shows.

Even though we don't start our day in the parks, the Disney World app on the phone will still show ride wait times. It gives us an idea what to expect when we arrive. Mickey's Runaway Railway has been down on the app most of the day, but as we got to the end of the street at Hollywood Studios, people had started to get in line! Since the line wasn't even outside the door, we went to check it out.

Score! In less than 15 minutes we were through both queues and on the ride! The kids think it's hilarious that Goofy is the Employee of the Month. 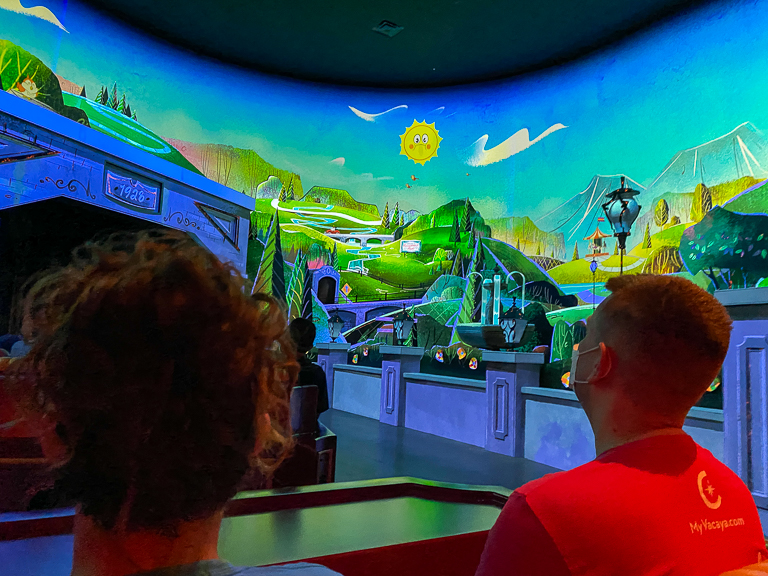 The five of us joined C3-P0 on a Star Tours adventure, though none of us were secretly Rebellion spies.
Over on the Alien Swirling Saucers, you can still fit 3 in a saucer if two of them are little. 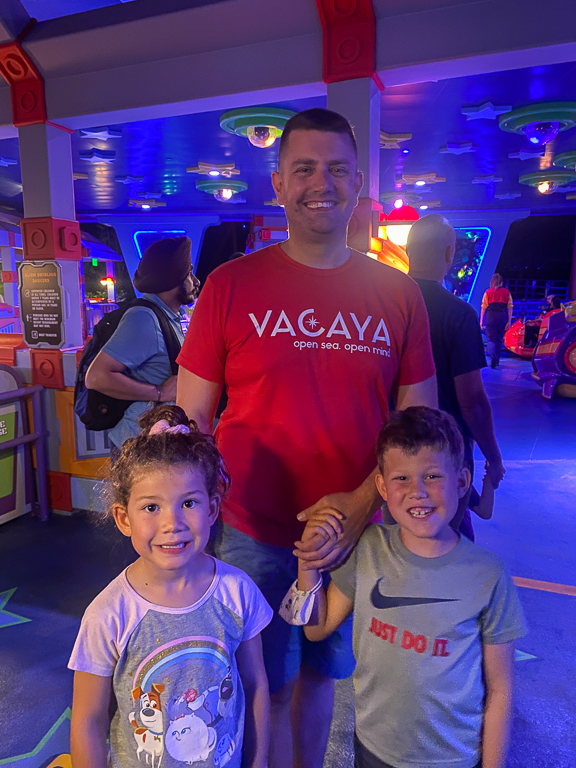 And Theresa and I get to ride together! 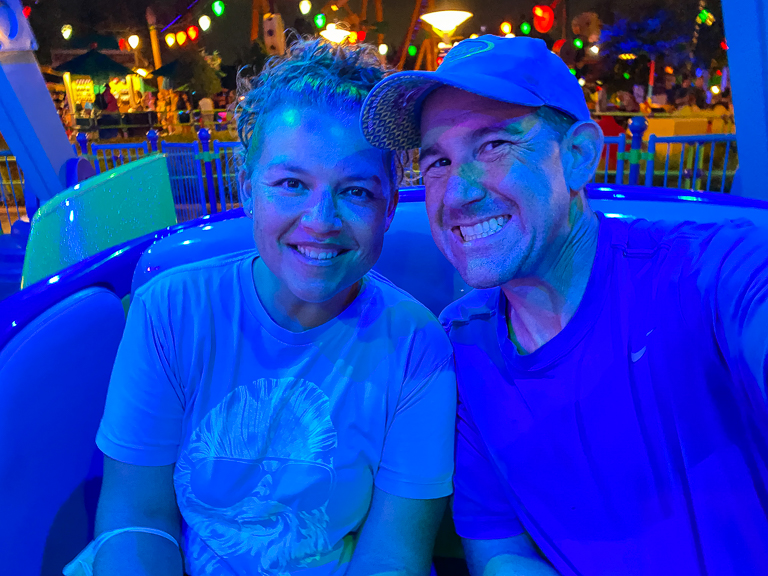 Ooh! A Num-num cookie. When they're warm and gooey, those are always delicious. 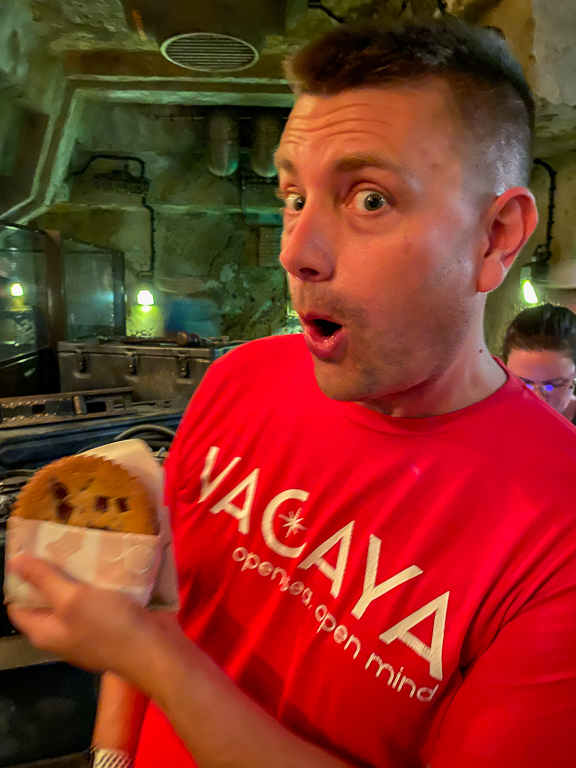 To finish our night, we're headed to one of the most popular rides at the park. We always hop in line just a few minutes before closing, Disney inflates the wait time, even at close, saying it's 50 minutes or something high.
Ten minutes after getting in line, after listening to the message from Rey, we hustled to the transport and the cast member asked for a youngling to help open up the doors. Ian was standing right there!
Everyone piled into the transport and we watched as Lieutenant Bek and Nien Nunb piloted our transport off Batuu. 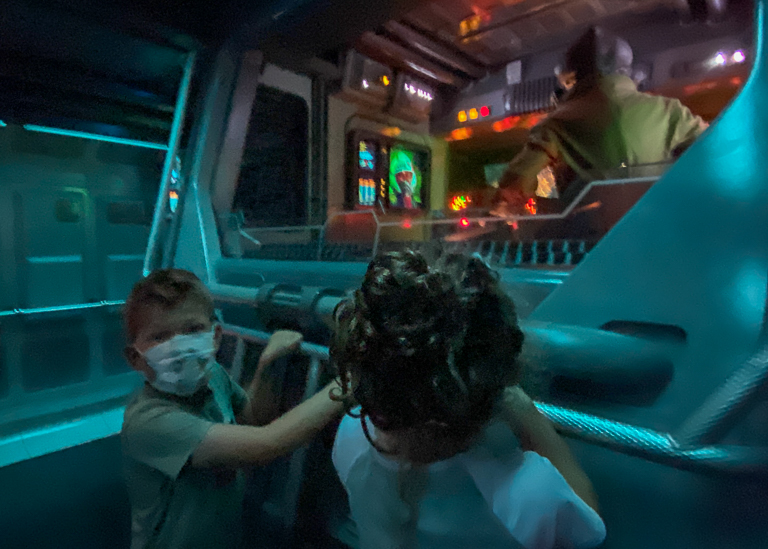 The kids need a boost to get a better view. 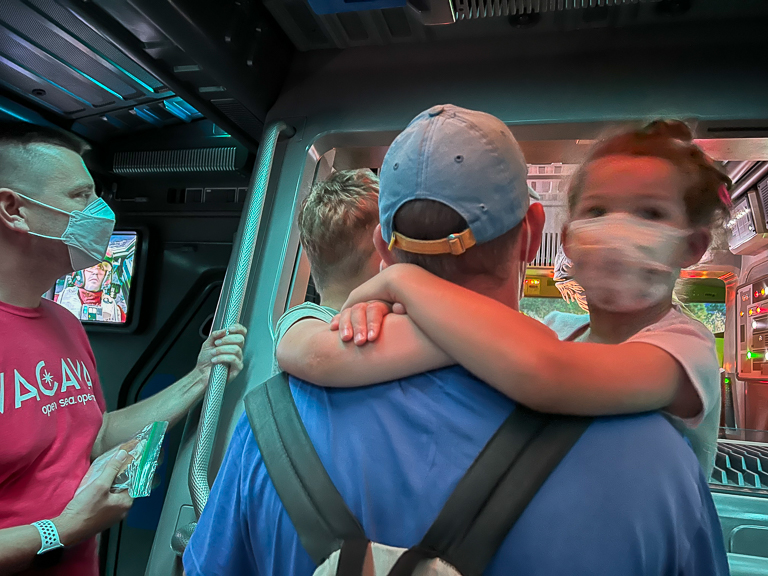 Twenty minutes after getting in line, we were on the ride! It's a really good ride, very detailed, but I like more physical thrills. Either way, it's a fun ride to end the night on. 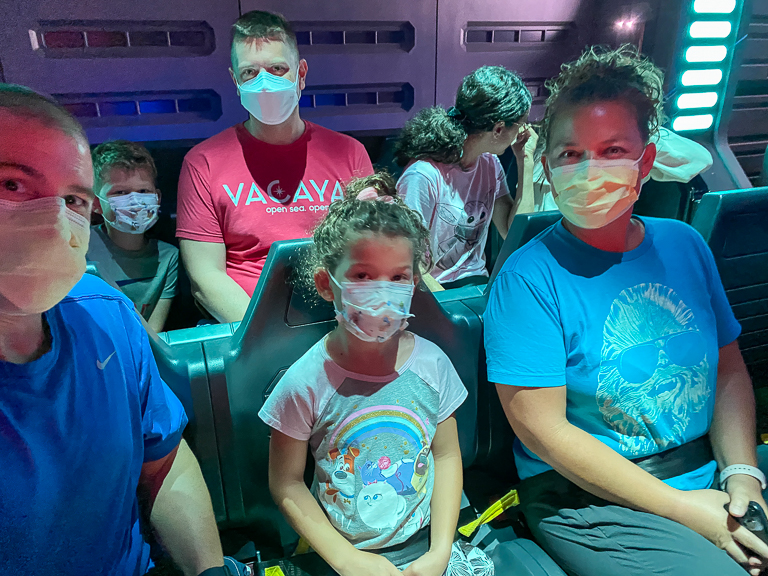 The next day, instead of meeting at the parks, we decided to meet at Disney Springs instead! Blaze Pizza had a deal earlier this month on Pi day (3/14) where you can get a free pizza pie! They extended the redemption so that you could come later in the month. With individual pizzas, everyone could get exactly what they wanted. Like Theresa's no sauce loaded veggie pizza. 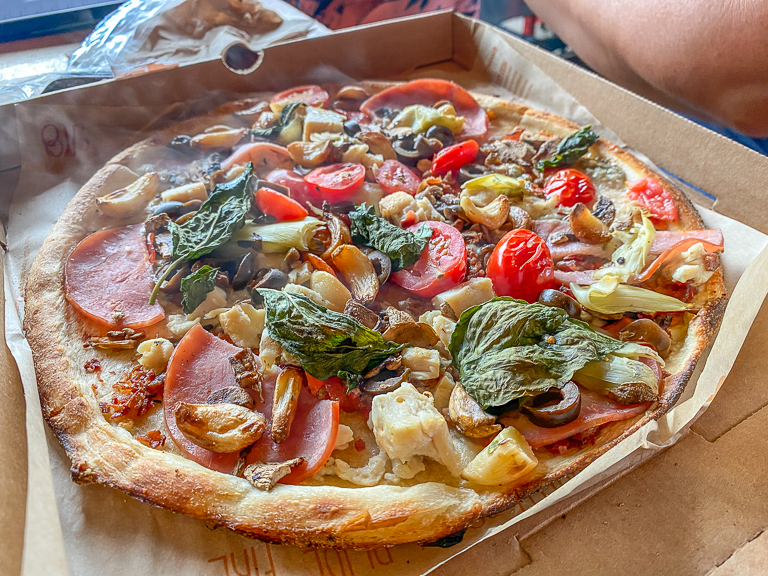 Or my double thick crust, every meat, some veggies, lots of cheese, and tasty flavor drizzles on top. So yummy. 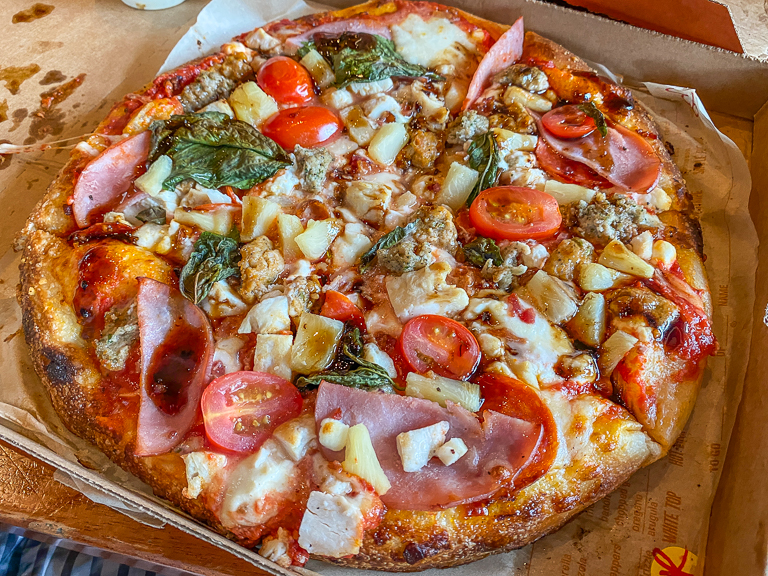 Walking around Disney Springs, the Rain Forest Cafe has a gator out front. Ian said it looks really fake because it's totally the wrong color. 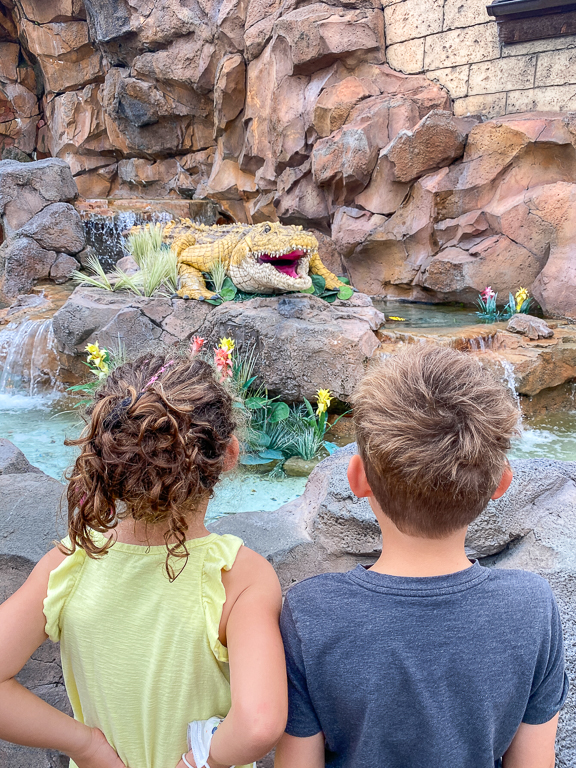 After dinner, around 7pm, all of went over to Epcot to walk it off. Since it's good to hydrate, we started at Club Cool, sampling free sodas. 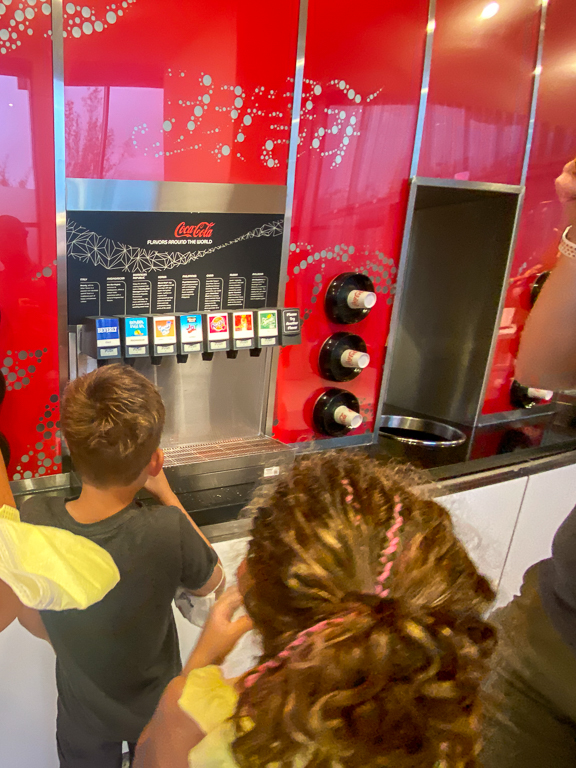 After riding Soarin', and The Land, we made our way to the back of Epcot. Back in California, Jacob loved getting caramel popcorn. We've got to eat some of the Werther's Original Caramel Popcorn with him. 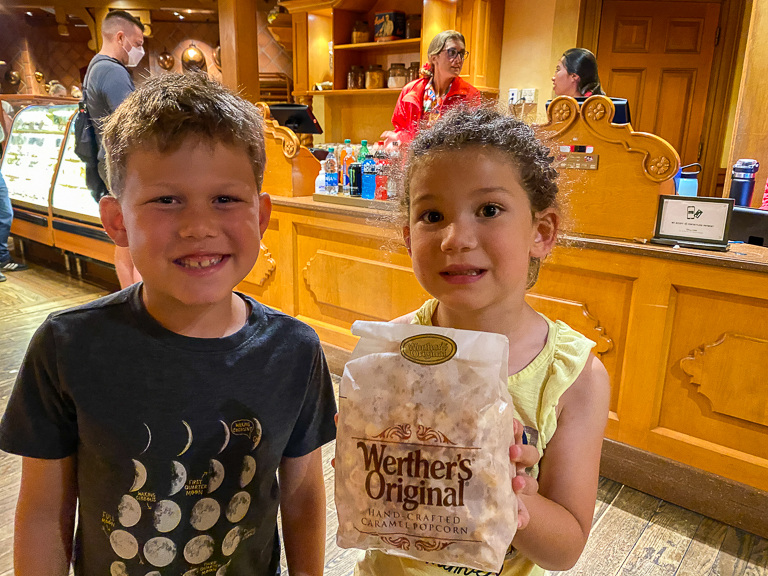 To end our night, at 8:55pm, all of us jumped in line to Remy's Ratatouille Adventure. The kids remembered that one of the last times we were in this line, we were playing with the Disney Lenses on my phone, and asked to do it again. Stars for the 50th anniversary, yes, they're pretty.

Oh my! Ian what a wild Ursula you would make!

We all know that Hades Rules!

Another short wait! Just 15 minutes after getting in line, we were riding around Paris on the back of a rat. 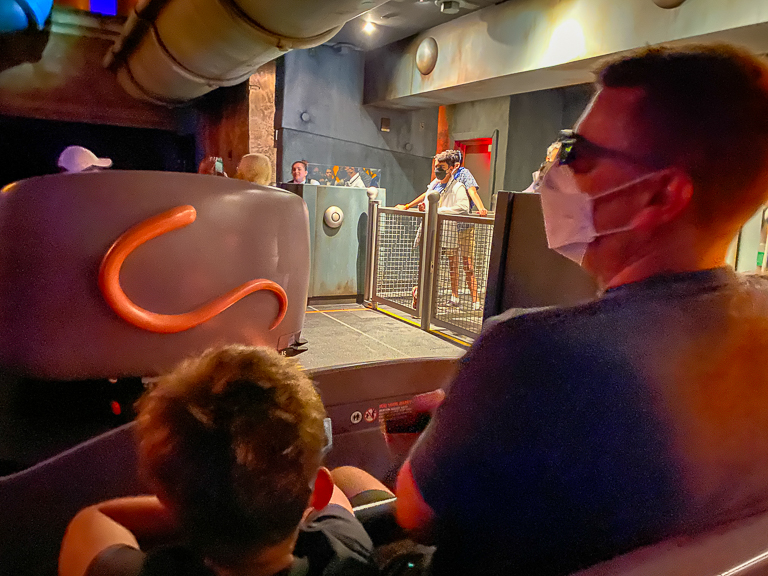 Thanks for coming everyone! 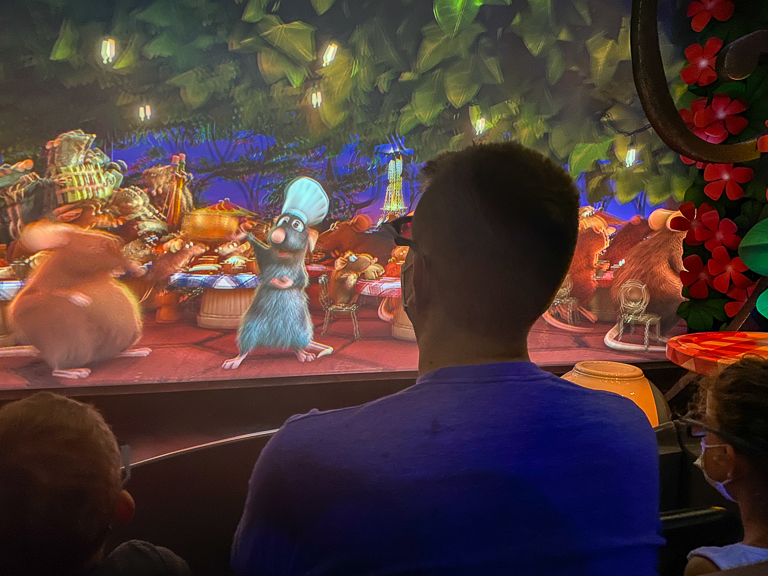 And thank you Jacob for hanging out with us and spending so much of your time in Florida with us! Safe travels back home! 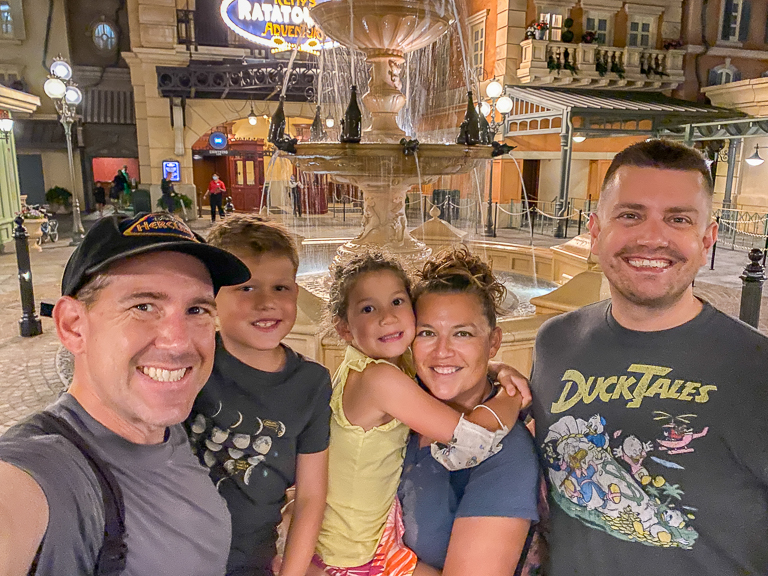