We're in Miami and we're inspired by the location to make some delicious Cuban food! One of our favorite Cuban restaurants when we were living in Los Angeles was Havana Mania! Theresa and I would meet each other there in the middle of a work day for a quick lunch date. Our favorite dish by far was the Filete de Pollo Al Ajillo (Garlic Chicken Filet).

The owners of Havana Mania actually came over from Cuba in the 1970s, and one of their first stops was in Miami Florida. In 1975 they came out to LA where they opened one of the first Cuban restaurants on the West Side. In 1997, Havana Mania opened in Redondo Beach, serving their delicious recipes to happy guests. I'm excited to make this dinner tonight! Let's get started! The first thing to make is the chicken. Inspired by SeriousEats.com, I made a marinate of garlic cloves, orange juice, lime juice, cumin, oregano, salt, pepper, and a little oil. All that went into a food processor to blend into a paste, then into a ziptop bag with chicken strips to marinade for 30 minutes.
Once the time was up, I tossed the chicken into a hot pan with a little oil and then let them brown on each side. 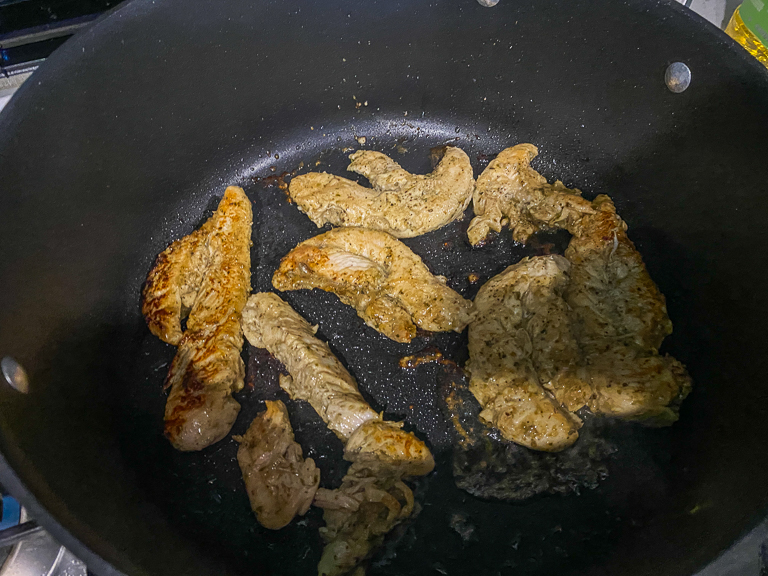 Those are smelling fantastic and looking delicious. 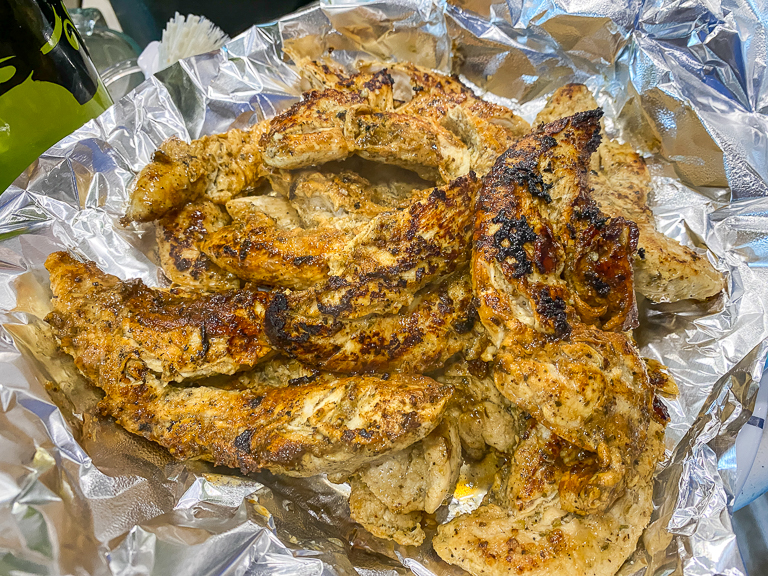 We can't let those tasty brown bits go to waste. Sweet onions are going to top my chicken, and those will do a great job at soaking up some of those flavors. 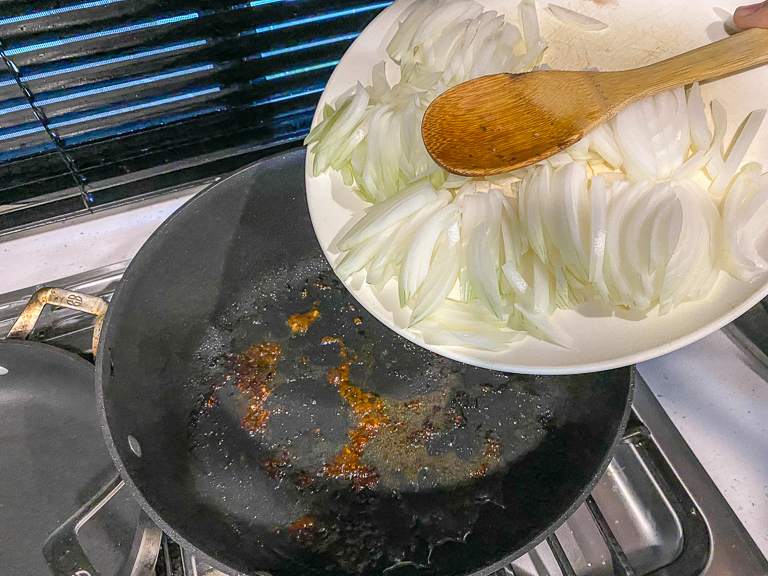 Perfect! They just need to cook down a little bit further. 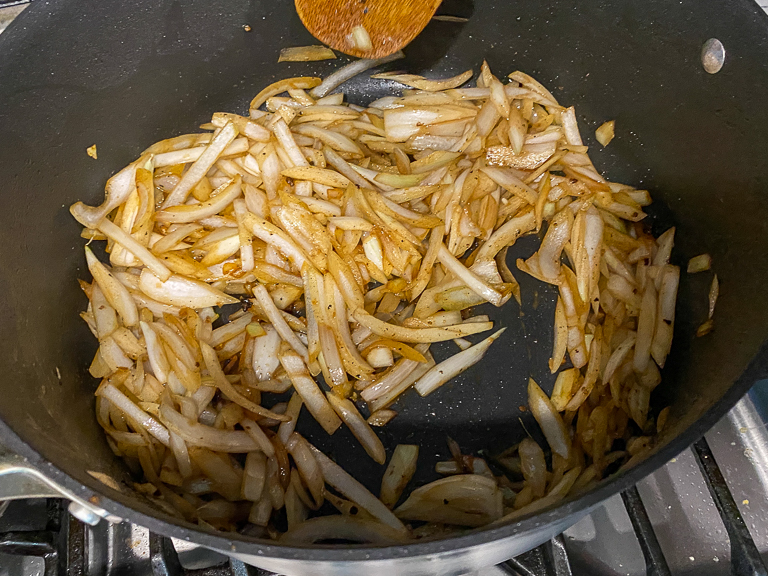 While I was prepping the chicken, Theresa was getting the black beans ready. On taco nights, we'll crack open a can of beans and heat them on the stove. Tonight's beans are getting a bit more attention. Following a recipe from skinnytaste.com, she added garlic, onions, green bell pepper, cilantro to a food processor. That mixture and the black beans went into a pot on the stove, along with cumin, oregano, red wine vinegar, a bay leaf, and salt and pepper. 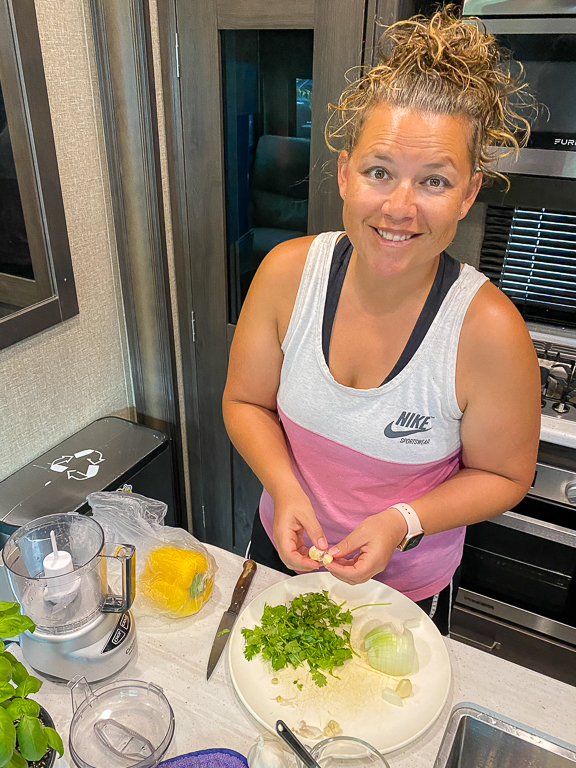 The dish from Havana Mania is always served with a few fried plantains. They are a delicious sweet treat to end the meal, though Theresa would always eat them first because they're much better when they're piping hot. At a grocery store there were boxes and boxes of fresh green plantains. 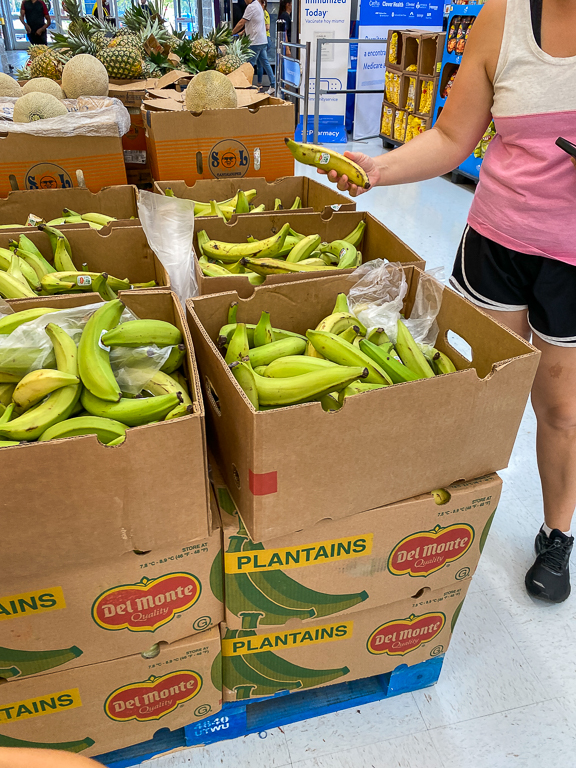 We had to let these sit on the counter top for a few days because ripe plantains cook up much tastier than the green ones. 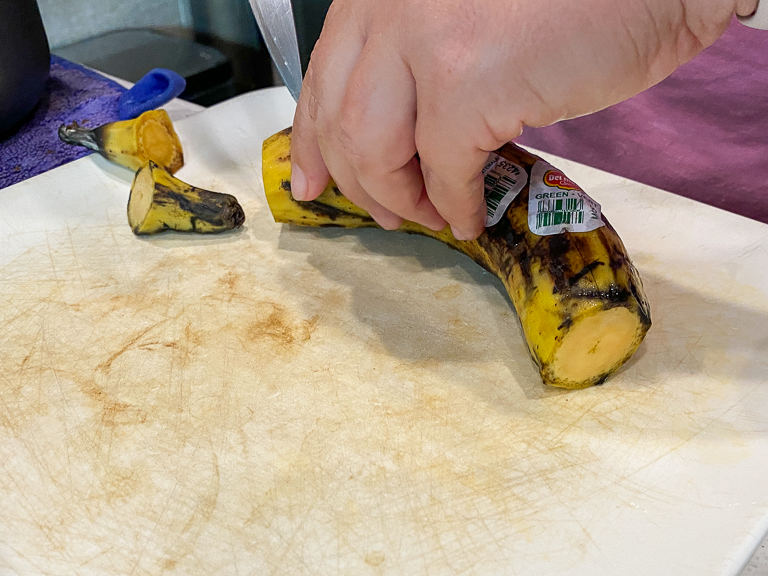 She sliced them on a bias. 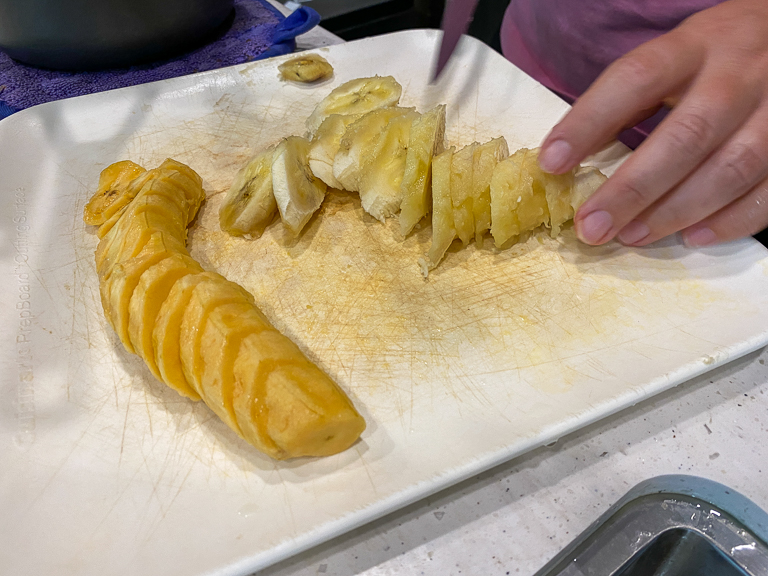 Then tossed them into hot oil to cook and caramelize the sugars. FoodNetwork.com gives a recipe, but there's not a whole lot more to it than that. 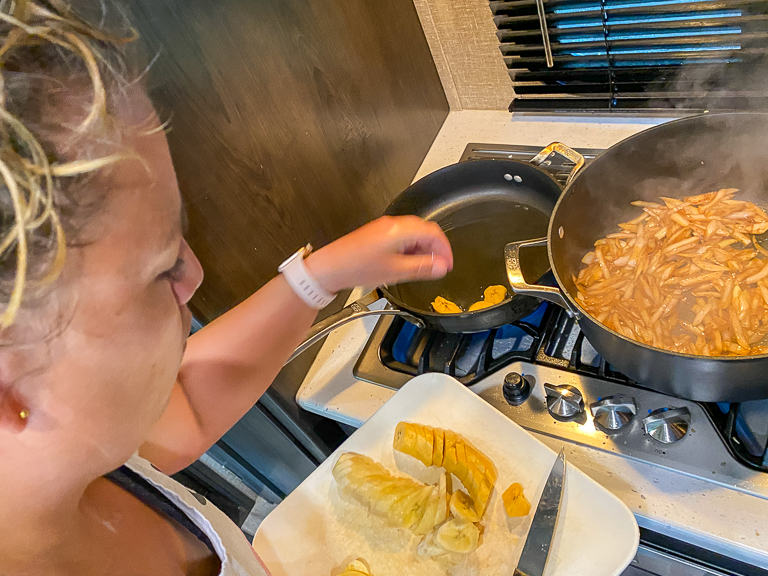 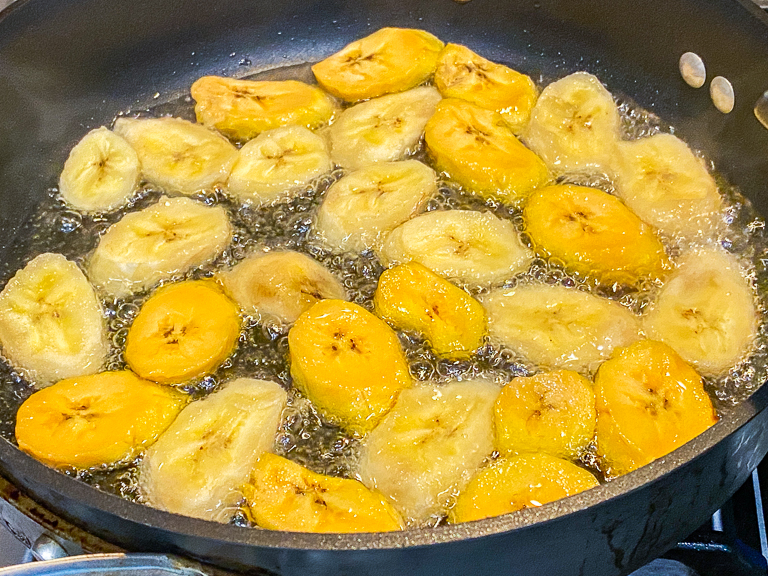 Once they came out of the oil, she hit them with a little bit of salt. Those are going to be amazing. 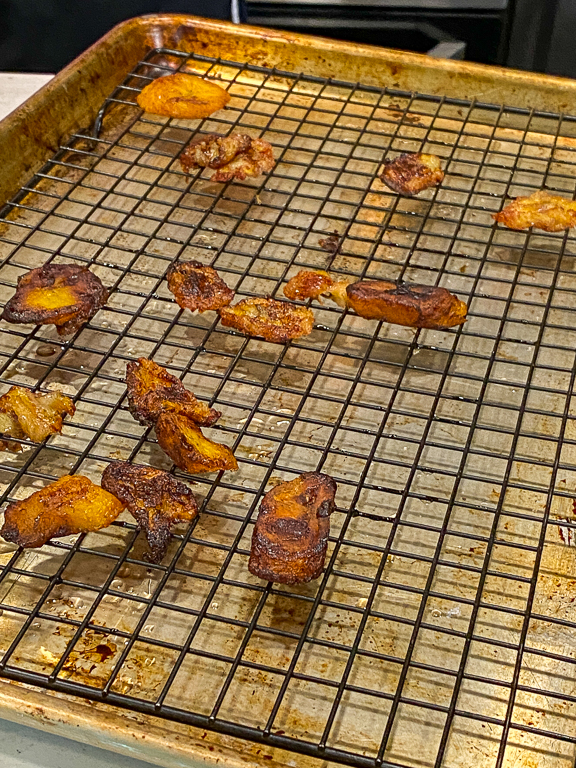 There's one other item that we'd always get at lunchtime, and it's not on the menu, but it was always a highlight of the meal. Warm and crunchy garlic bread was always brought out to the table to accompany the meal. To make my garlic butter, I crushed up a few garlic cloves and put them in a bowl with half a stick of butter. 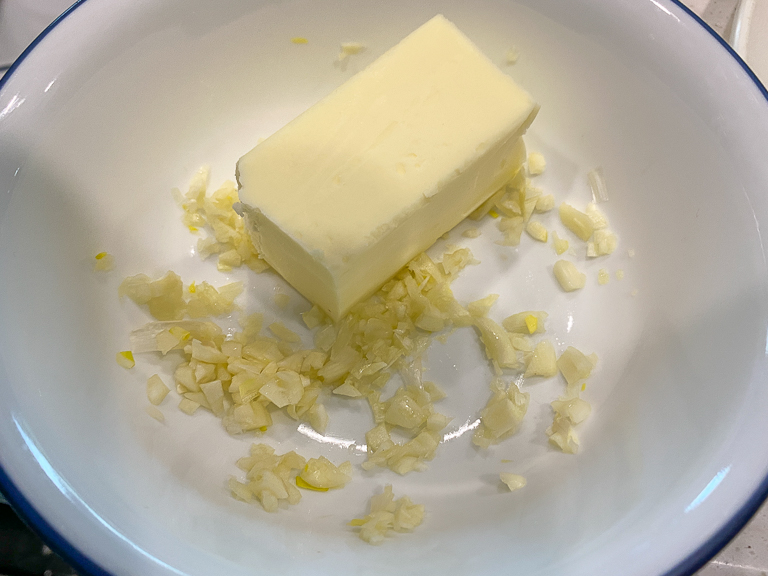 That went into the microwave for 45 seconds. Enough time to melt the butter and heat up the garlic. 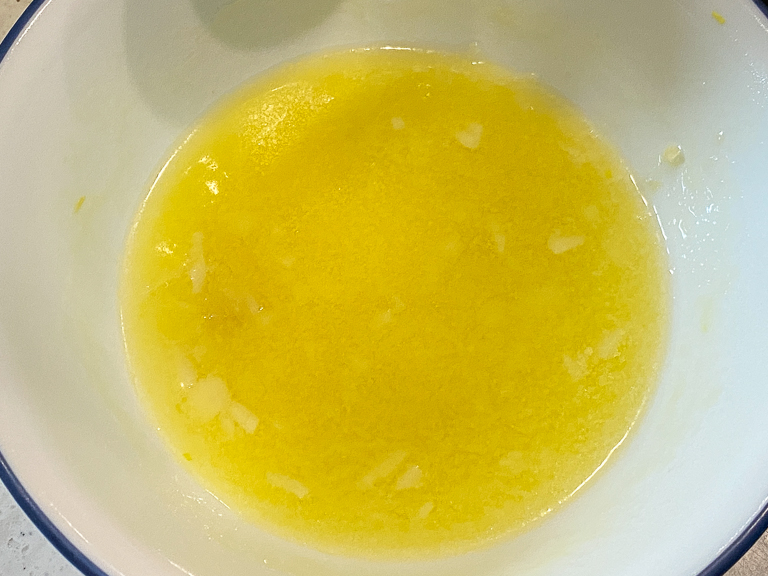 I let that cool and solidify for an hour to meld the flavors a little better. I bought a baguette and toasted in the oven for a few minutes. Once it was hot, I sliced it in half and spread my butter mixture on top. Then I put it all back into the toaster oven to broil to get even more crispy. 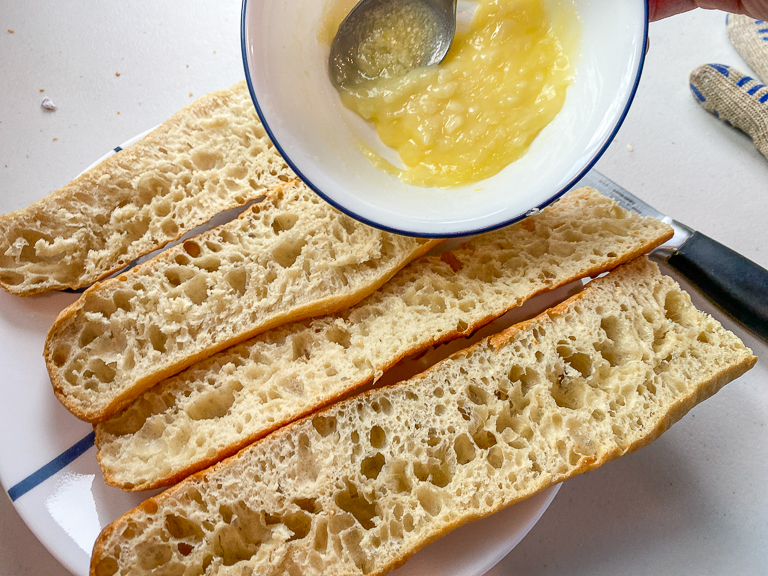 Like so many of these "Made At Home" meals do, the house is smelling amazing. There's so many aromas floating around that aren't typical of the foods we usually make. I'm getting hungry!
I plated our meal tonight trying to match the plate from Havana Mania. Ours is on the left, theirs is on the right. I know they use red onions and we use sweet onions, but I think that's all pretty close.

Our garlic bread on the left, and theirs on the right. If I had a panini press I could have tried to get the grill marks that they have, but I'm just satisfied that they look pretty similar.

As a special treat, while Theresa was looking for shops in the area, she saw one that sold Materva, a famous Cuban soft drink from the Cawy Bottling Company. It's flavored with the leaves and twigs of the Yerba Mate plant. She also found Jupiña, from Cawy also, the tastes like Pineapple! You know me and soda taste tests. I'm excited to try these! 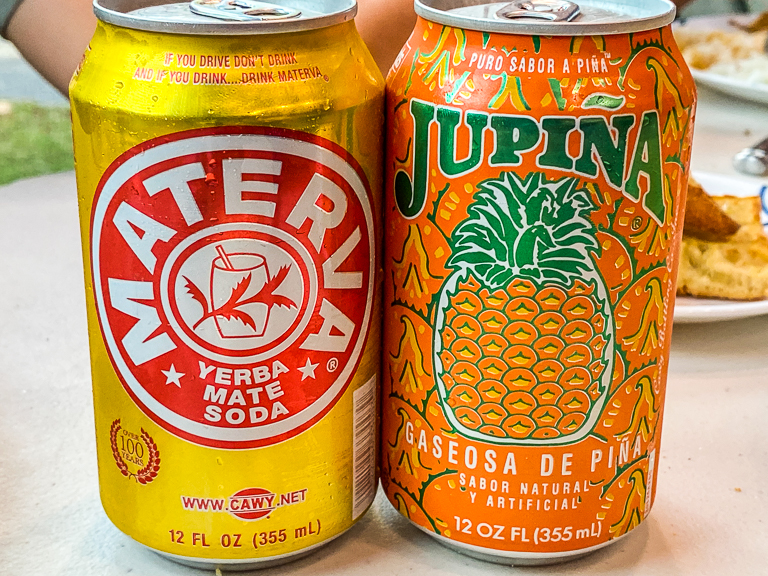 Let's dig in! With all these delicious smells going around, I'm hungry and so are the kids.
I'll take each of the items one at a time.
The Garlic Chicken. So flavorful! I don't think it quite matches the chicken from Havana Mania, but it's really good. I don't think theirs has all the spices that mine does. The recipe I used suggested wiping the marinade away before cooking, but I didn't follow that because why would I want to wipe off the flavor? Still, this chicken was fantastic. Ian said "I don't normally like meat, but this chicken has good seasoning."
The Black Beans were way better than just warming a can of them up. Alli asked if it was much more work to make them this way, because this is how she wants them on taco night from now on. Ian said "I'm surprised I like the black beans, because I don't usually like black beans."
The fried plantains, the few that made it over to the table (because Theresa was snacking on them as they came out of the frying pan), were so good. The kids were asking "are these healthy?" because they wanted to find a new dessert that we wouldn't mind feeding them all the time. We could snack on these all day. 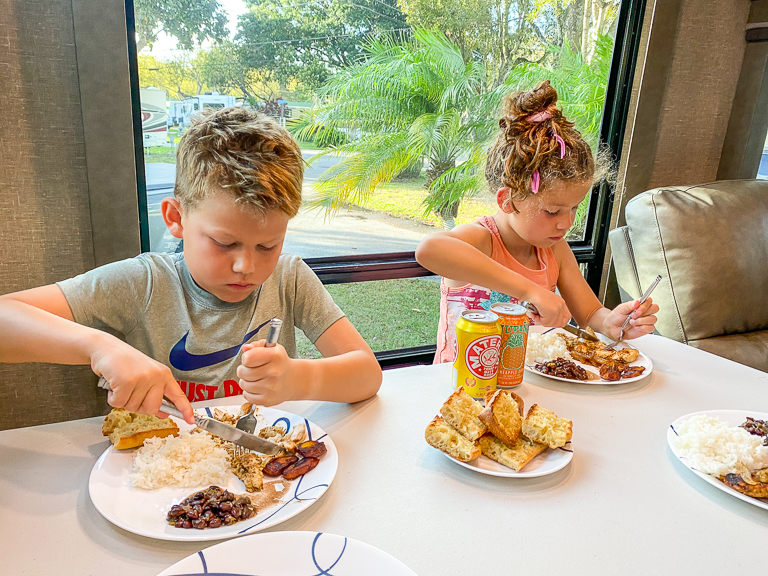 I love tasting new soda flavors. The Materva is a unique flavor that's hard to nail down. I was getting a little bit of a sweet bubble gum flavor from it. Other taste cream soda or ginger ale. It almost feels like it could be alcoholic, though it's not. The Jupiña Pineapple soda. Wow is that sweet! It's a very tasty pineapple flavor, and I like it better than Fanta Pineapple. 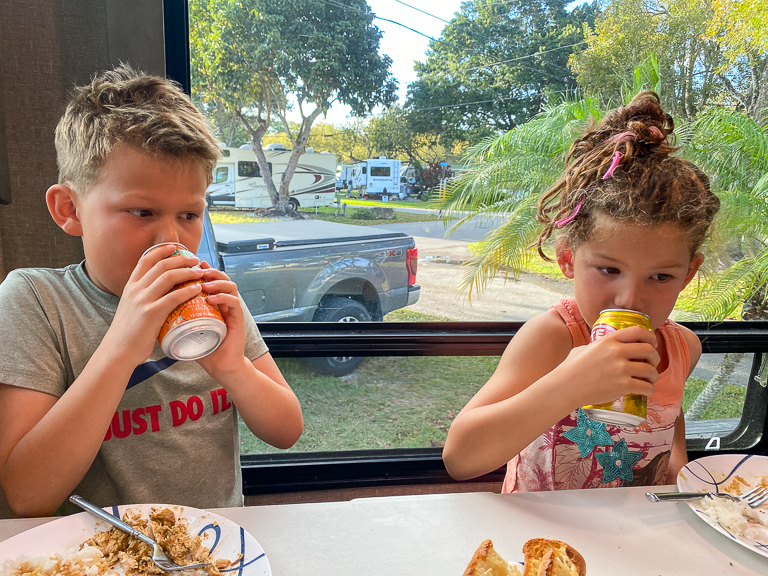 And my Garlic Bread? 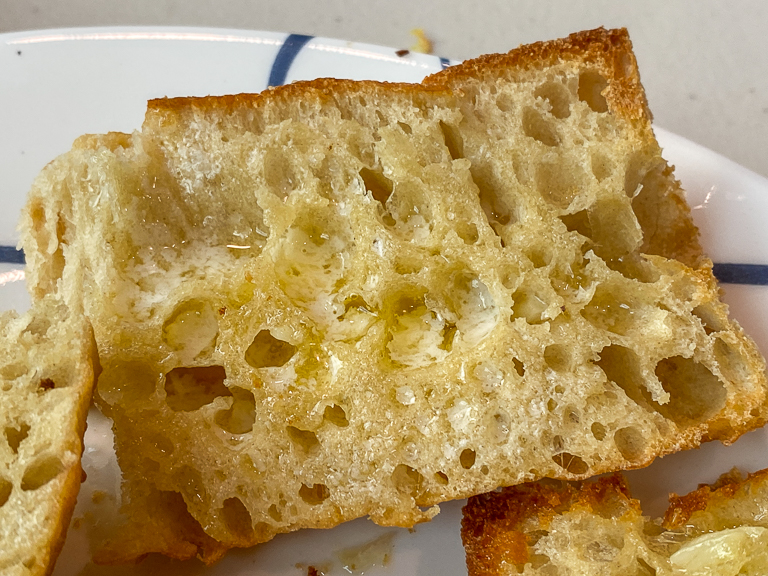 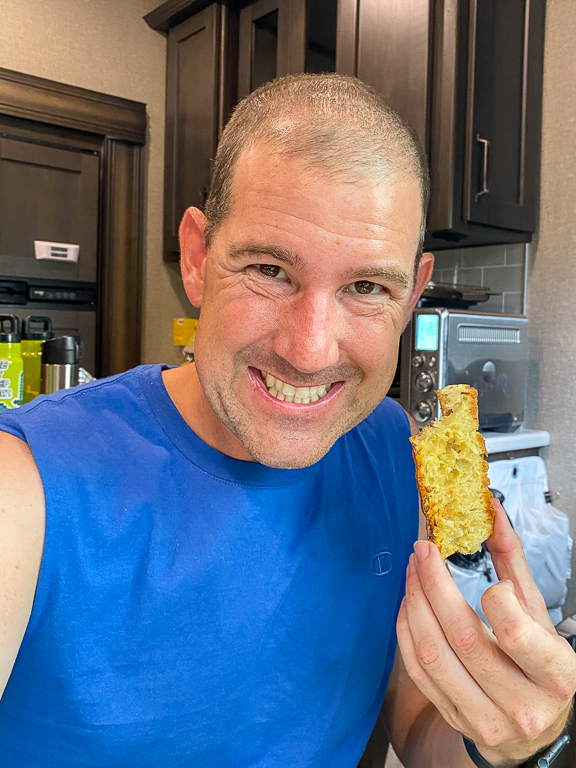 Look at those clean plates. I think they liked it.
Havana Mania at home was a big success! 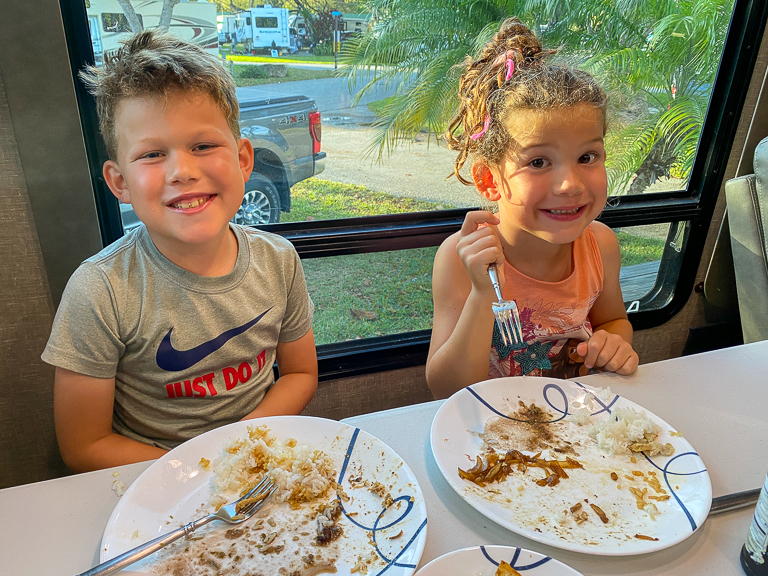