Meeting with Don, Amy, and Austin in Tampa Florida

It's been a busy day today already. We started in the morning at Disney World with our friends Tom and Abby. Next the four of us jumped in the truck and drove the 2 hours from Orlando to St Pete Beach in Clearwater Florida, just west of Tampa. Earlier this week we got to see Austin and Donald. Now it's the end of the week and Amy has joined them! Spring Break has started! Abby was supposed to join us too, but sadly she got sick at the last minute and couldn't fly to meet us. But hooray! At least we get to see the three of them again! 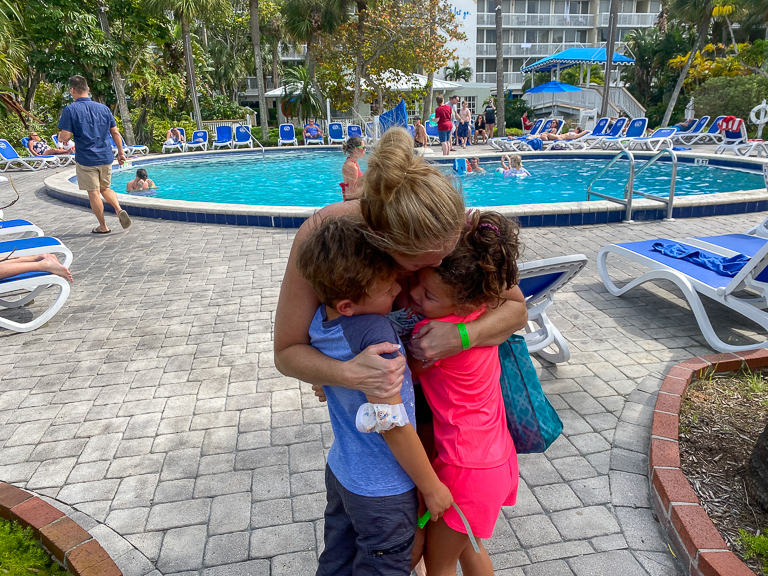 They are spending the weekend at the TradeWinds Island Grand Resort and we're joining them for the afternoon. 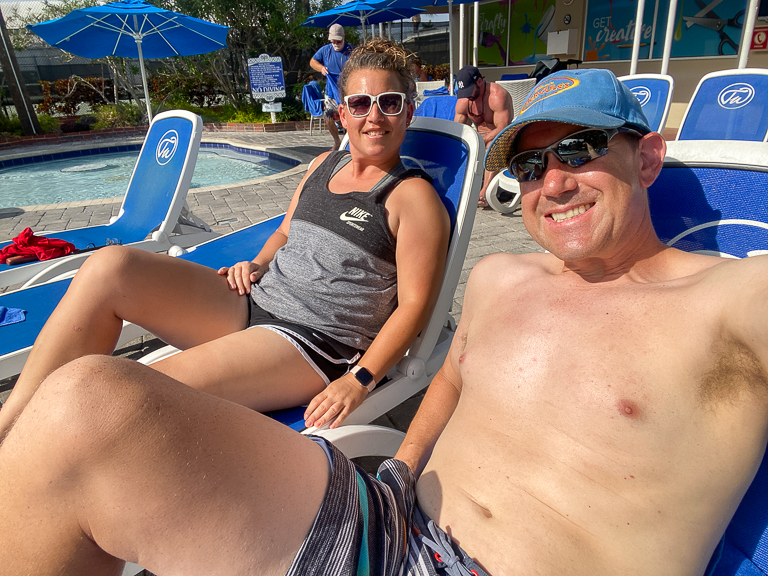 And speaking of winds, they were whipping while we were visiting. Donald had said they had a big inflatable slide that the kids were looking forward to, but due to the winds, they had it down the entire time. 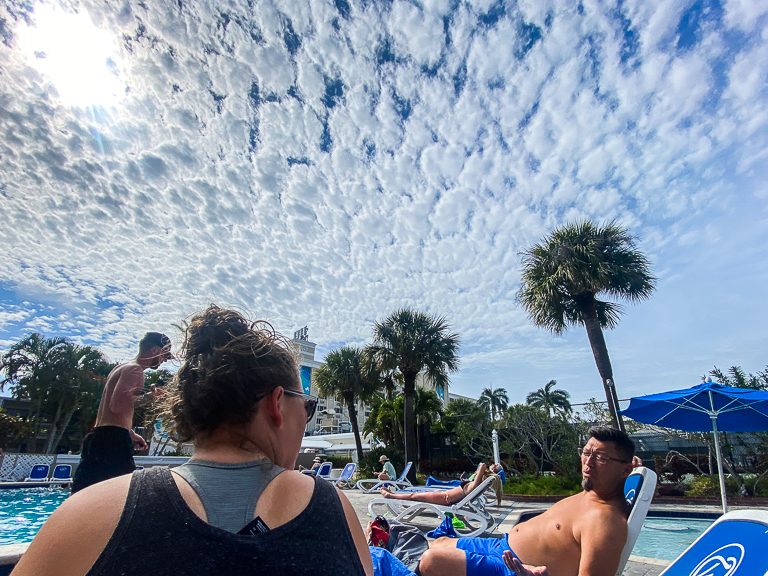 To make up for their disappointment, Uncle Donald bought them ice cream from the hotel ice cream shoppe, and boy was it expensive! $8 for a single scoop cone! Oh my!
On their way back to the pool they found a crafting table where they could paint porcelain figures. 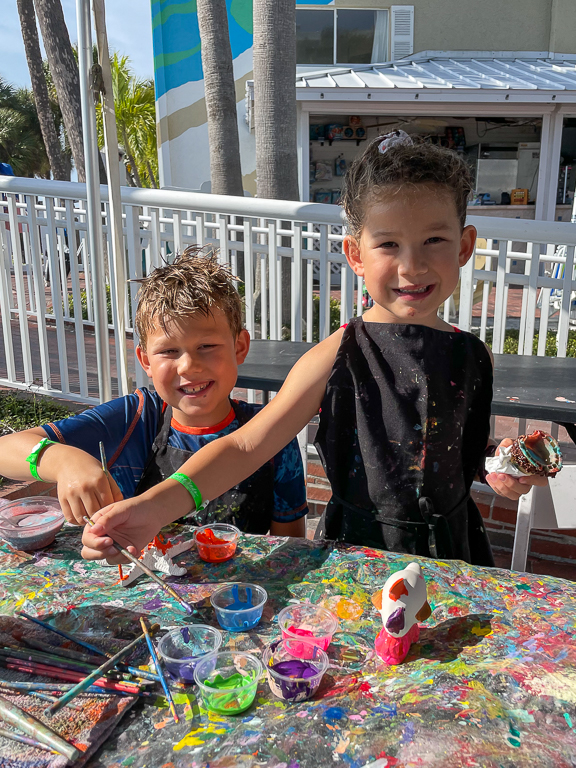 Alli had her ice cream in one hand and a paint brush in the other. 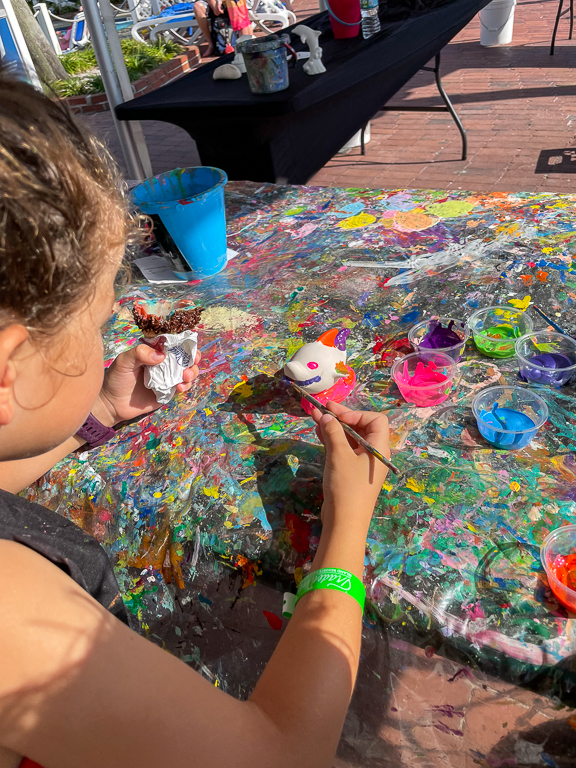 Don't get those paint cups confused with your ice cream cup! 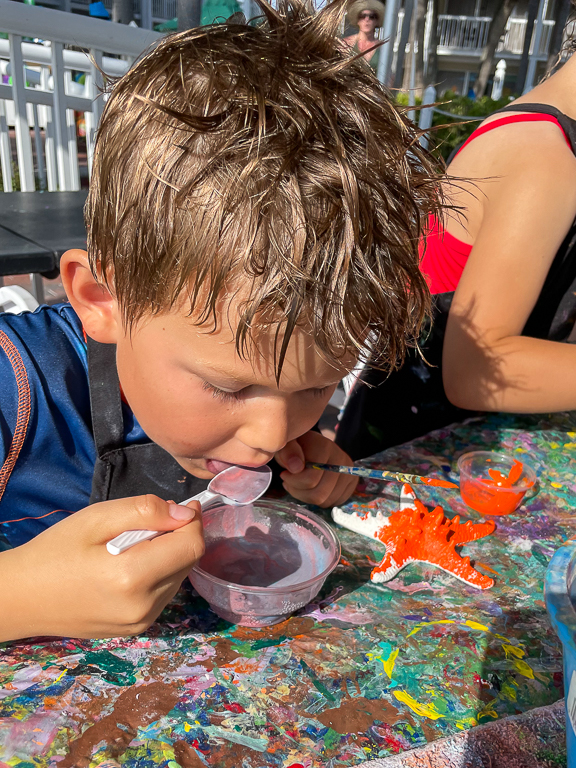 Back at the pool they found a football and had fun throwing it around. 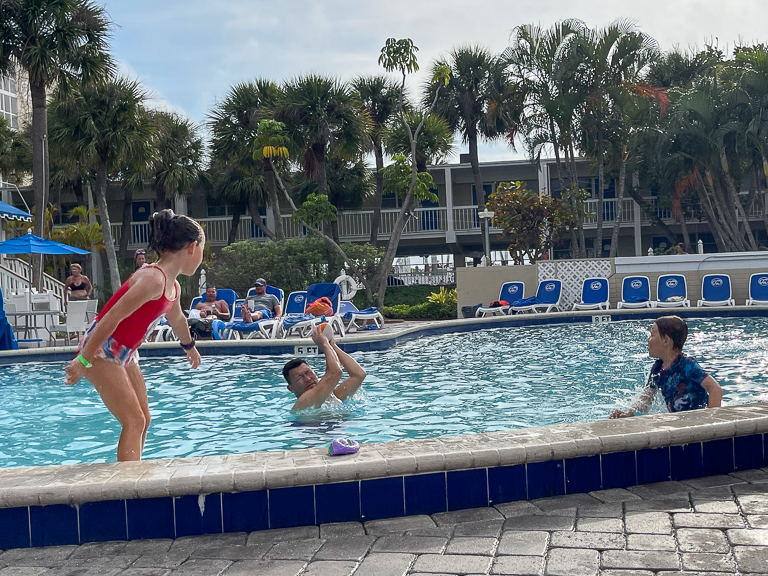 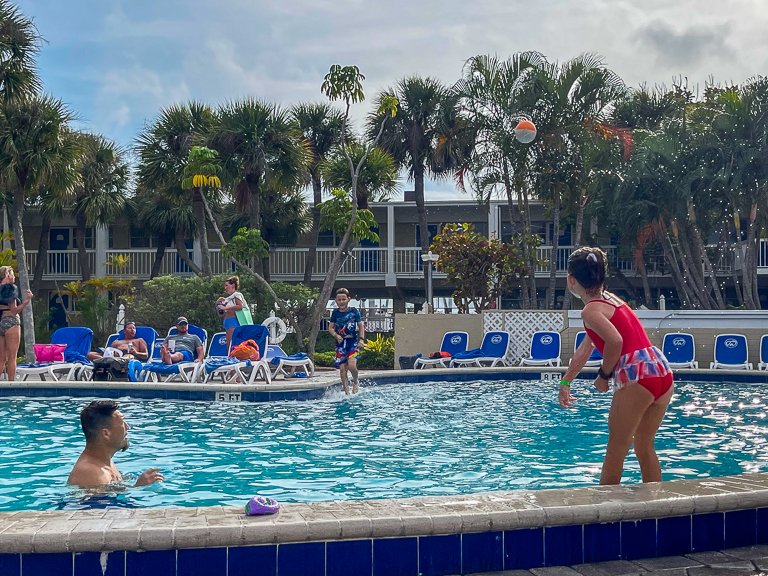 It's dinner-time and I'm getting hungry! Donald has spent a few spring breaks here in this area and has talked up two different restaurants. One is a deep dish pizza place that sounded delicious, but the other is a fancy steakhouse. Ooh. Being on the road, without easy access to a grill, I haven't had a good steak in a long time. 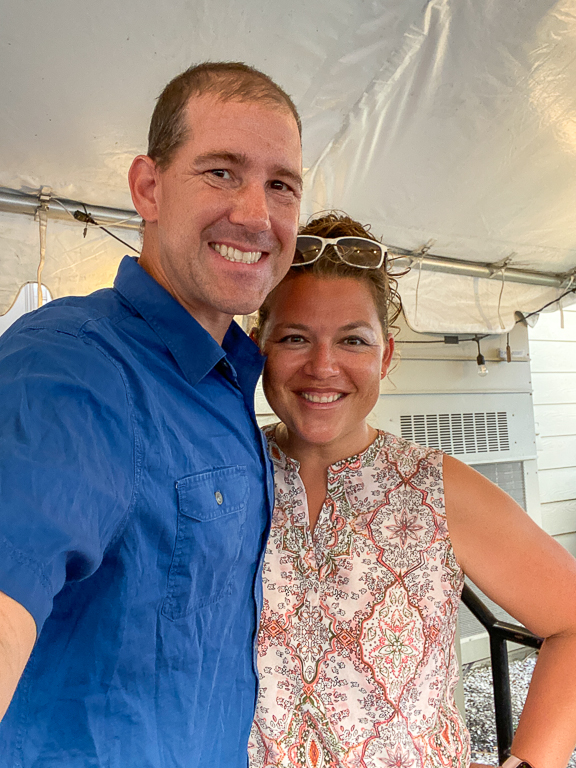 Let's go to the steakhouse!
1200° Chophouse is a highly rated restaurant that serves premium steaks and rich sides. Looking over their menu, there were so many tasty things that I would want to try. We got as dressed up as we liked and drove over. Their dining room is fairly small, so it took 45 minutes for two tables to open up to seat the 7 of us. 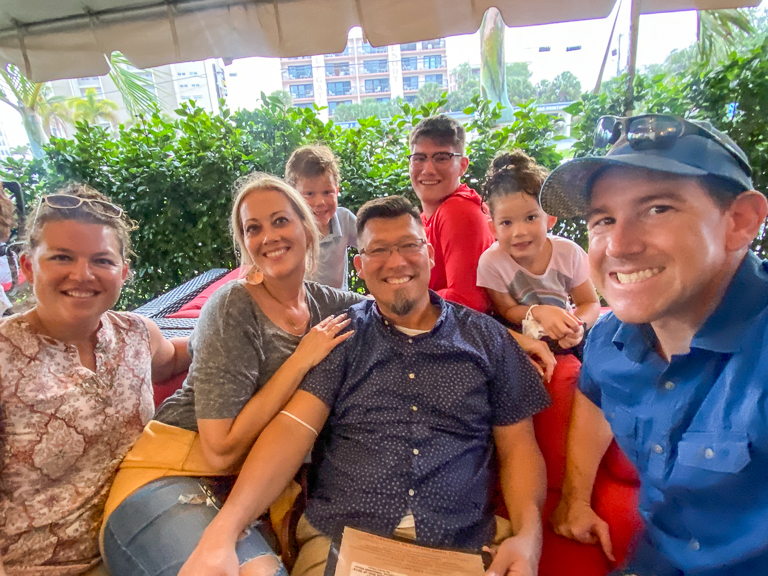 We started with Truffle Fries and a Gouda dipping sauce. The fries turned out to be large potato wedges drizzled with truffle oil. 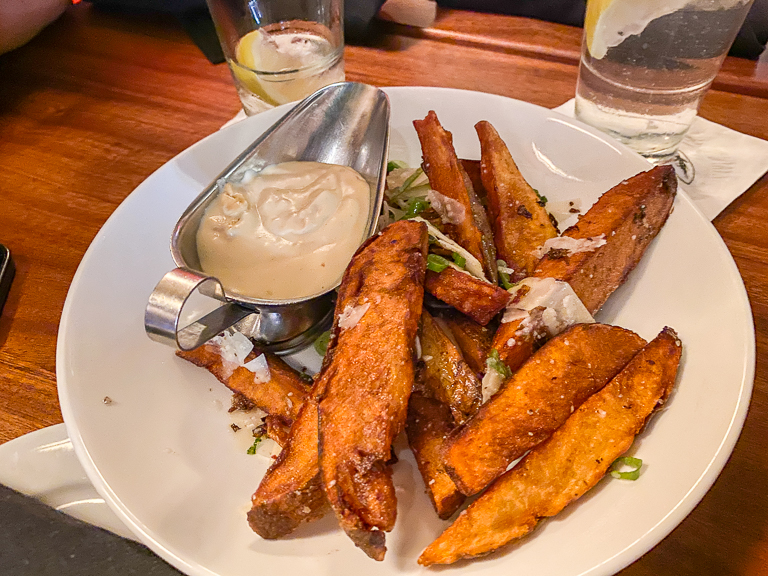 The kids loved them! 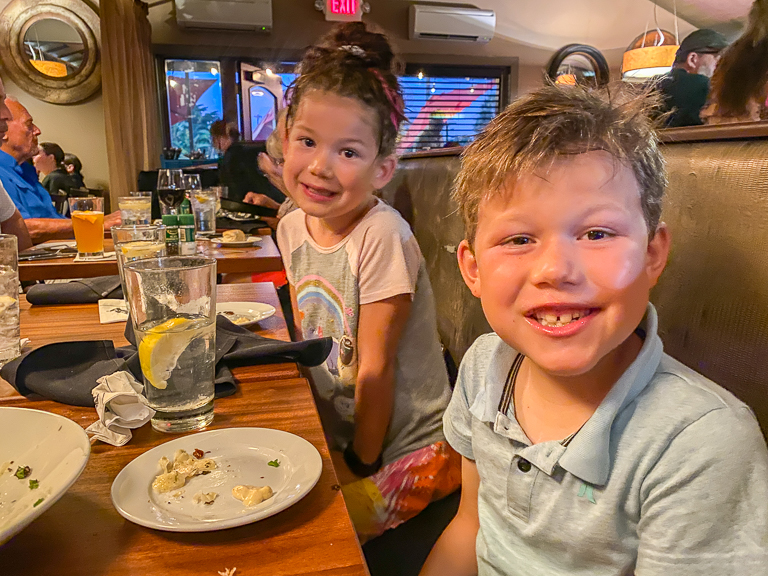 Here's the real prize though. This is what I was most tempted by on the menu. 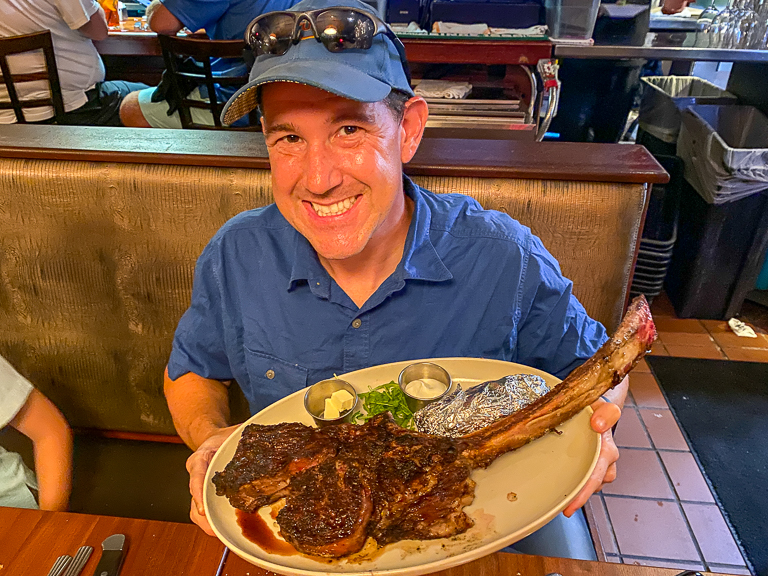 It's a 3 pound Tomahawk Ribeye and it's seared under a 1200 degree broiler! That's a lot of meat! 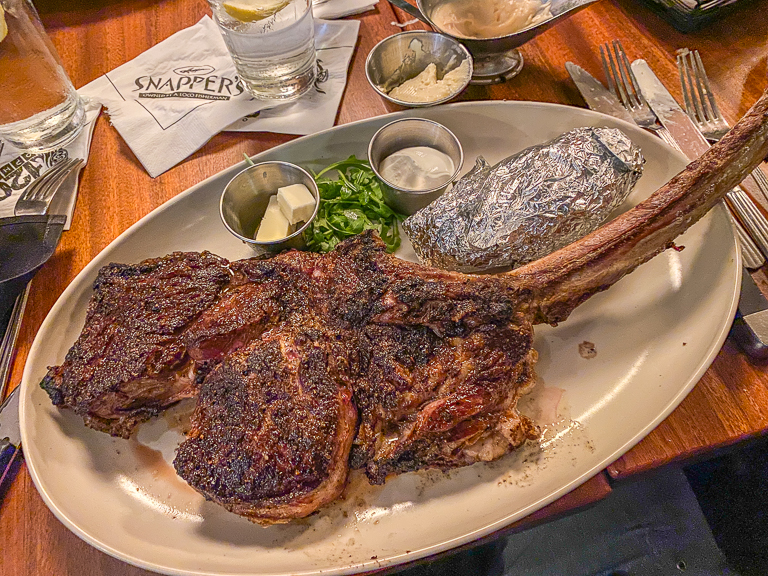 Why not get two of them! The best flavor is right by the bone, so Donald and I weren't shy to grab the bone and dig in. Even though our palates are very pleased with all these delicious flavors, we are thinking about dessert. 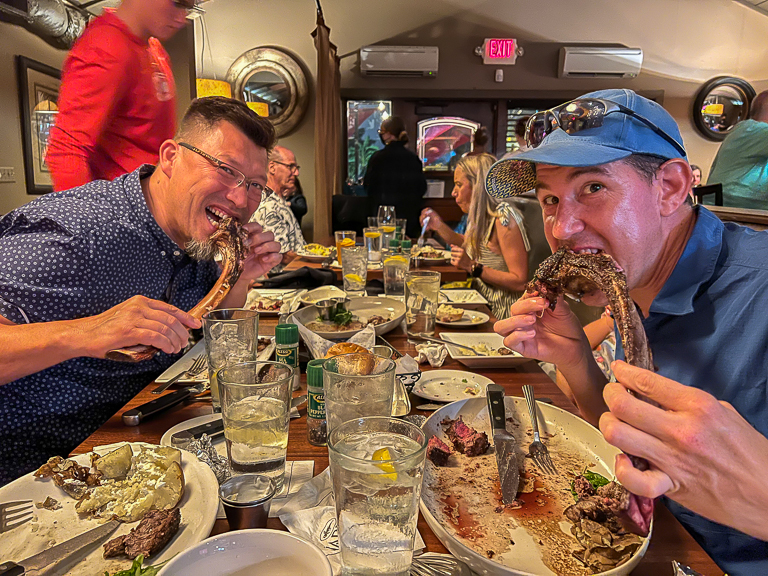 Let's go get some ice cream! There's lots of options near the beach where we are, but one spot we've wanted to try since we got to Florida is the ice cream stand shaped like a giant ice cream. The Twistee Treat! 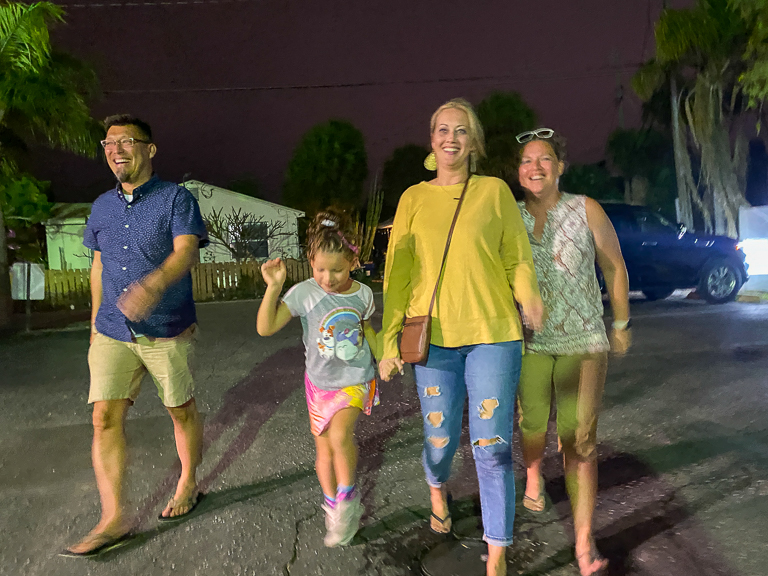 Amazingly inside this stand, they have 66 different flavors of soft serve ice cream! That's a lot of soft serve machines! With so many flavors, Alli chose Black Cherry, and of course it has to be coated in chocolate! 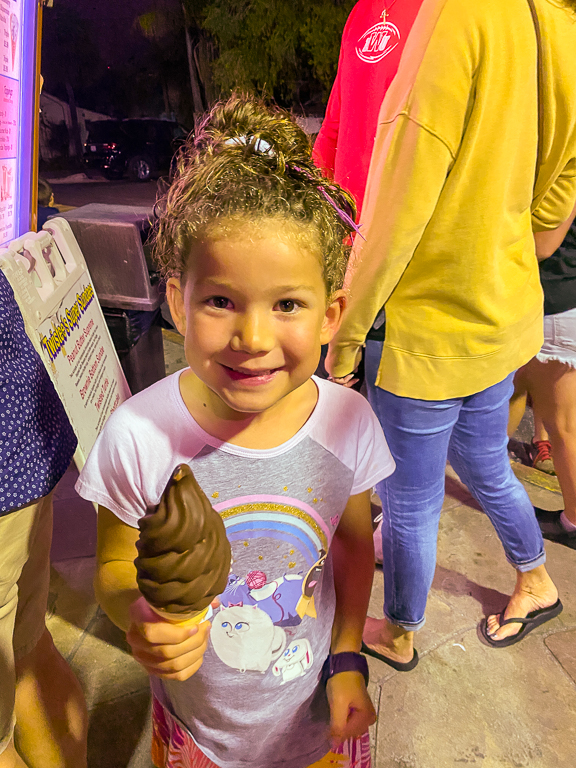 Ian on the other hand saw his favorite ice cream flavor, Superman, in the hand scooped section.
Ian - Can I get it dipped in chocolate too?
I don't think that's typical, but they went ahead and did it for him anyway. 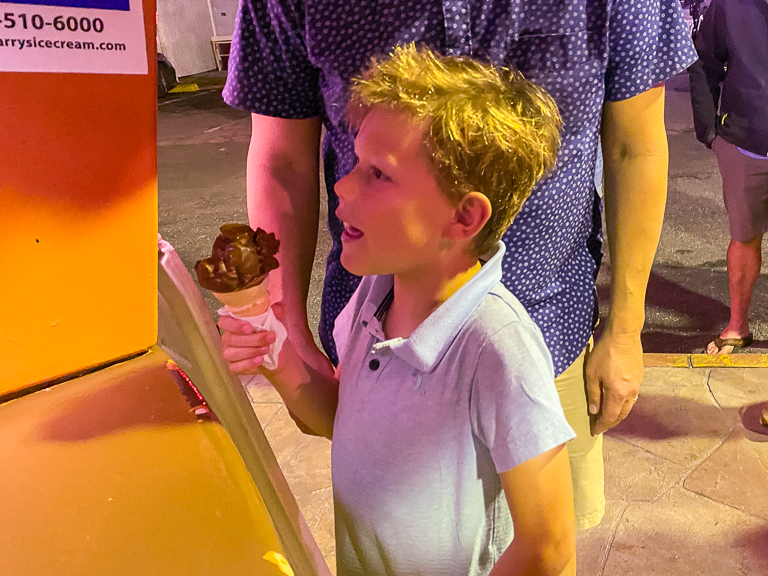 Yum! Theresa and I split a waffle cone with Mint Chocolate Chip and Chocolate ice cream. I also thought the Butterfinger Typhoon (like a Blizzard) that Amy and Donald got looked delicious! 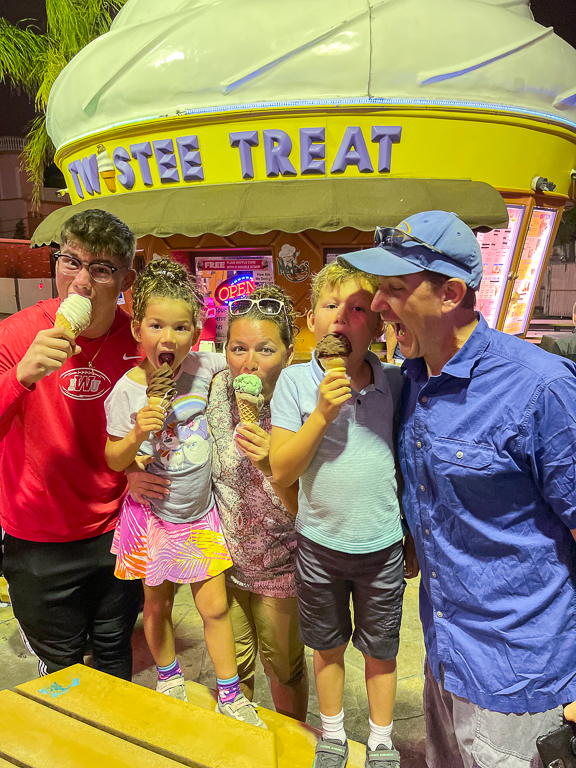 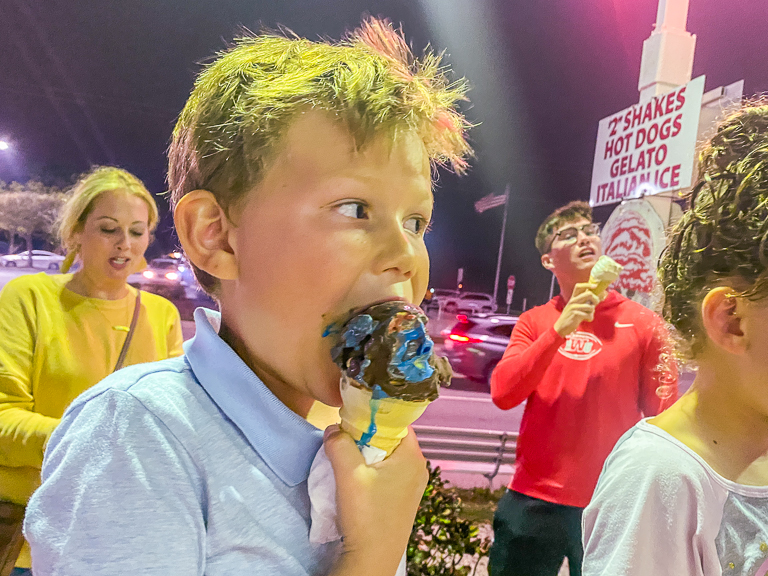 All too soon it was time for us to go. We've got a two hour drive to get back home. 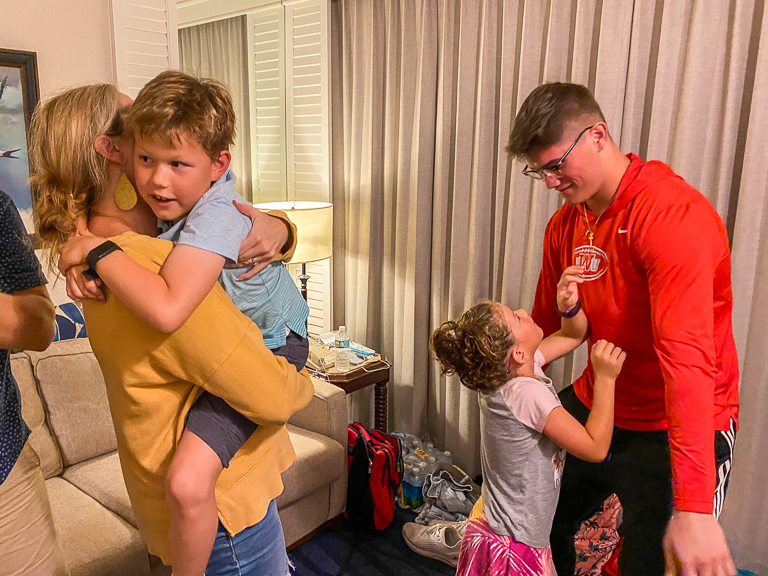 It was great to see everyone! Thank you for dinner and dessert! Have a great rest of your Spring Break! 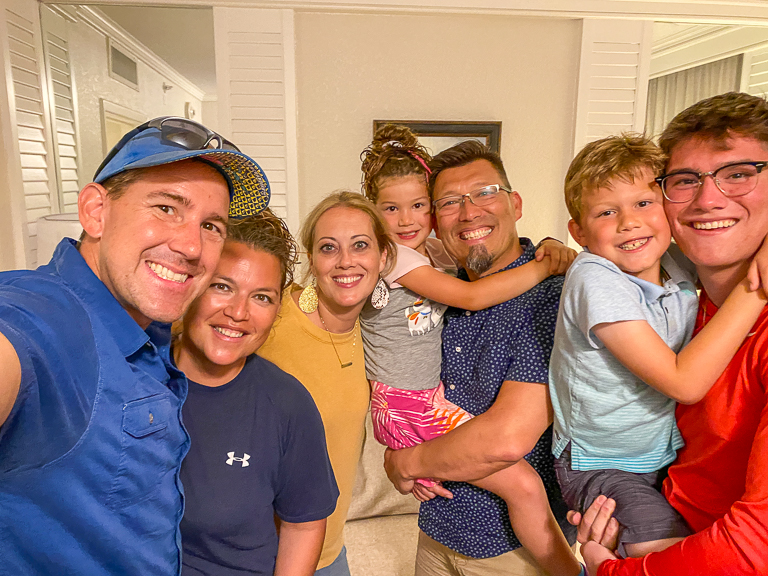