Today we're leaving Everglades RV Resort and heading north, back up to Orlando.

Just like getting into the spot was a pain, getting out was too. There isn't enough room in front of me to pull out straight, so I had to turn the truck to stay on the road. That meant the RV had to climb a 6" curb to make the turn. Luckily Theresa was ready behind me with lots of yellow stacking blocks to make a ramp for the wheels to climb up. That broken corner wasn't my doing, but apparently someone else had to run over the concrete slab too. 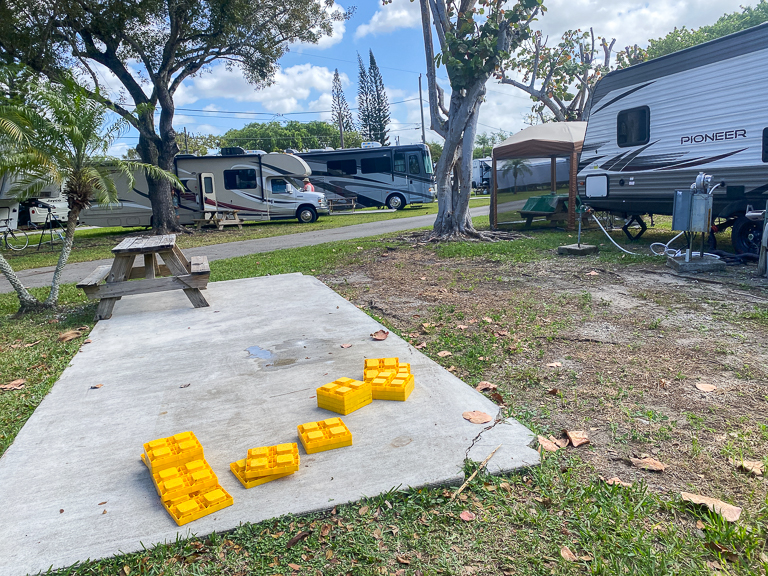 Goodbye creepy welcoming alligator!
Our drive was 4.5 hours, but it was pleasant and uneventful, like we hope all our drives are. 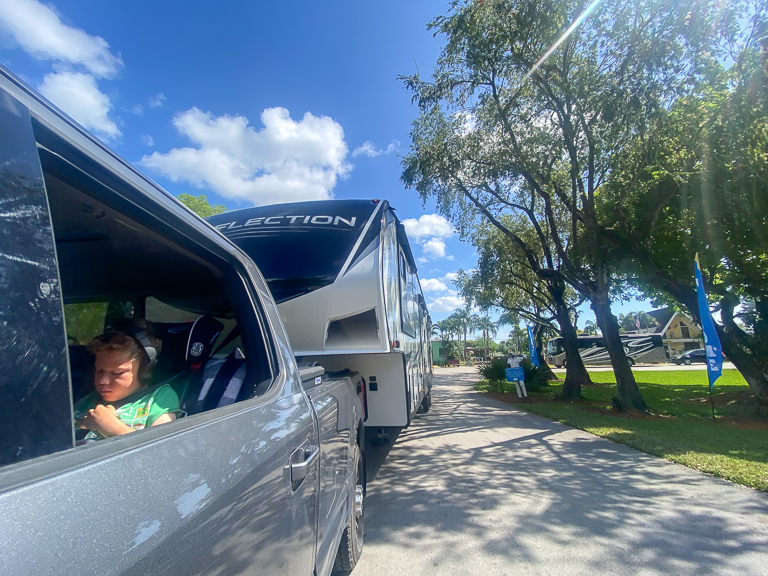 Since we're leaving in a few weeks, we've been trying to squeeze in all of our annual doctor visits. Some of them took months to get in for an appointment, like our eye doctor appointments. We found a good one though who took lots of time with us and did a very thorough exam. The kids are getting exams too, and she let the kids come in and participate in the adult exams so they'd know what was happening. Pretty fun getting to see what the doctor sees. 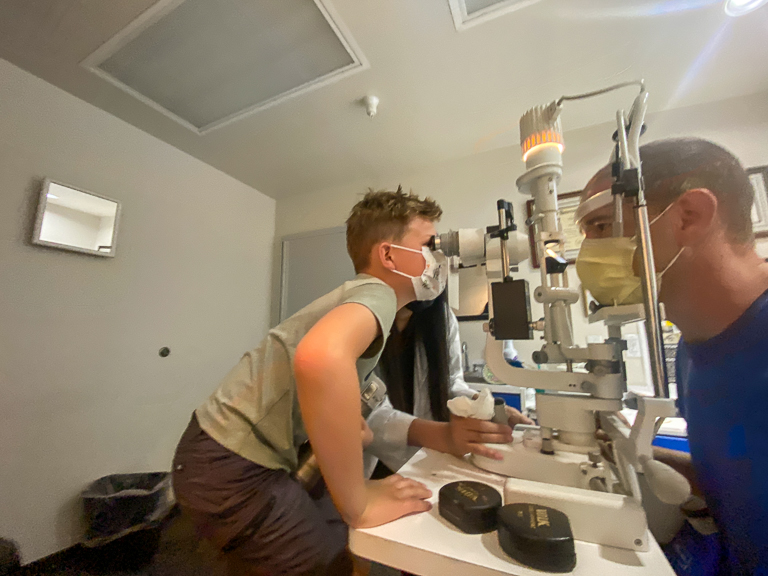 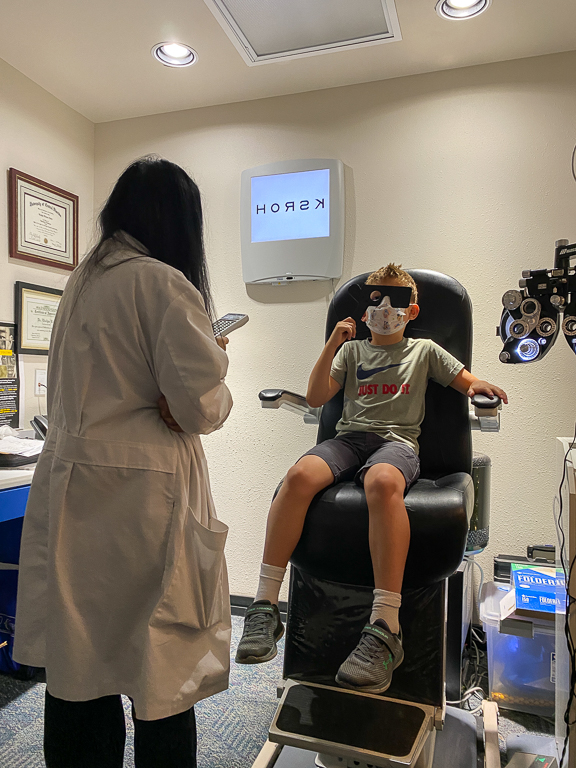 After going shopping I had 12 pounds of sweet onions that I needed to caramelize. 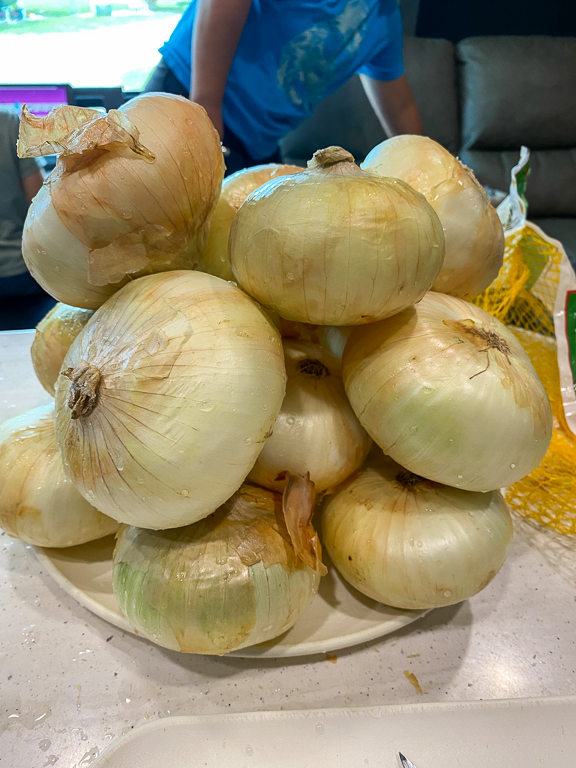 The big dutch oven pot we bought holds them all. That's a lot of onions. 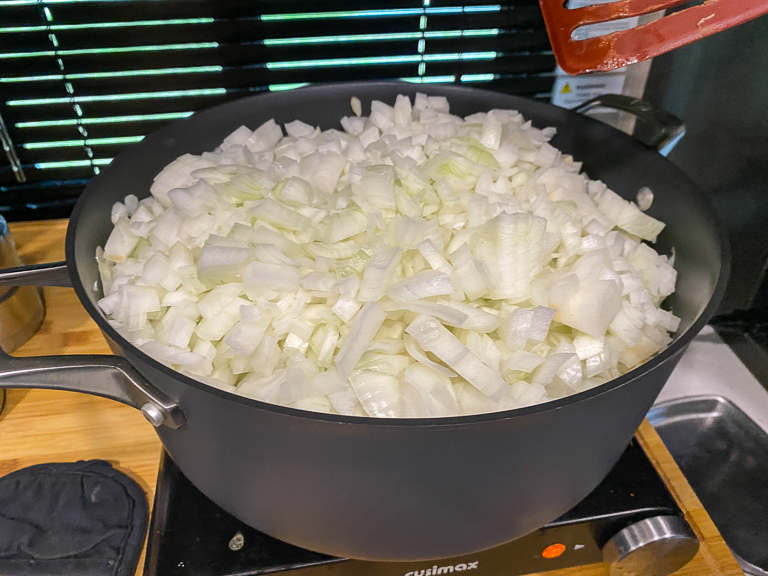 And it took hours and hours for these to reduce down to the dark brown color that makes these so delicious. 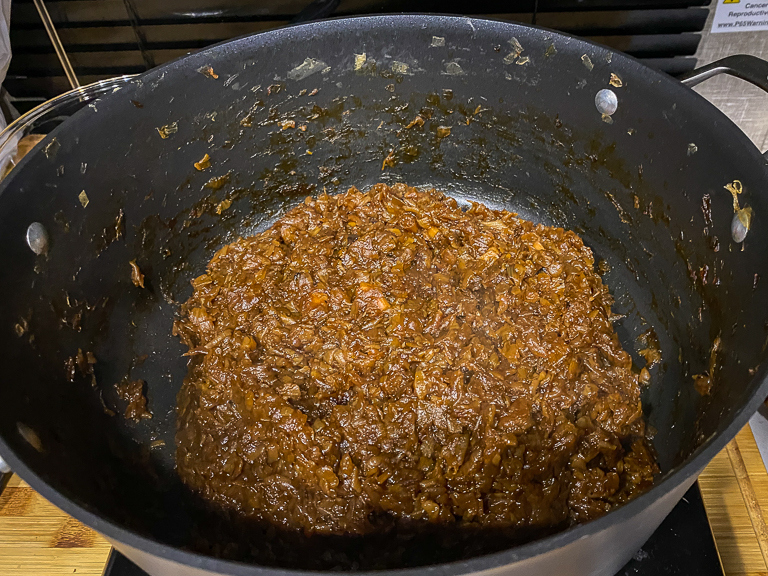 While we're here in Orlando of course we're going biking. We've got to build up our miles before we leave so we can reach our 600 miles goal! 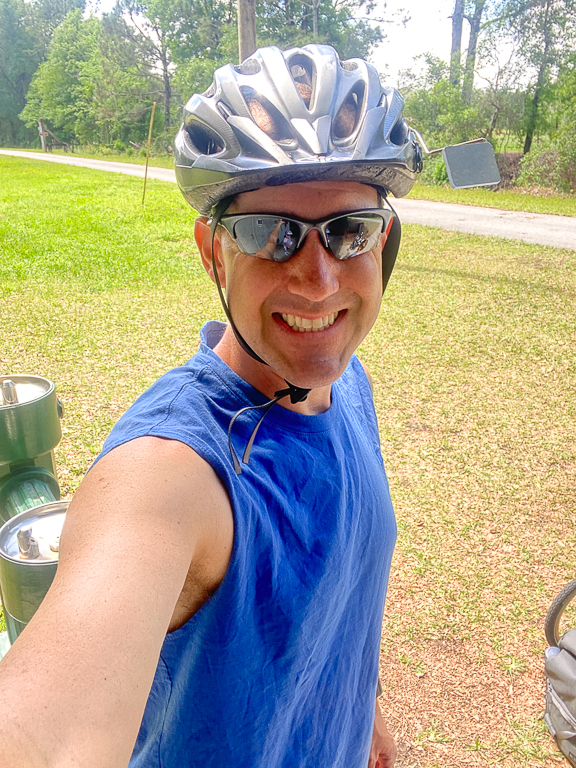 We always like to stop at the alligator bridge. 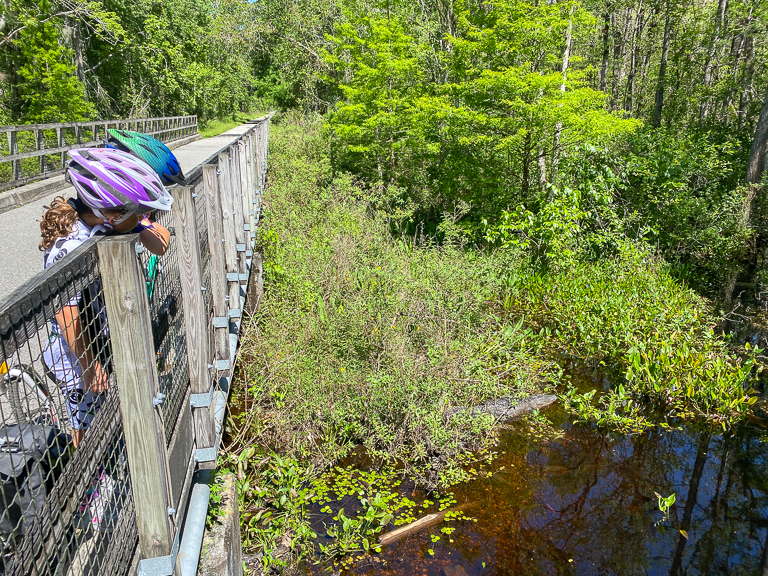 Look at all the baby gators! Alli and Ian think they're so cute! 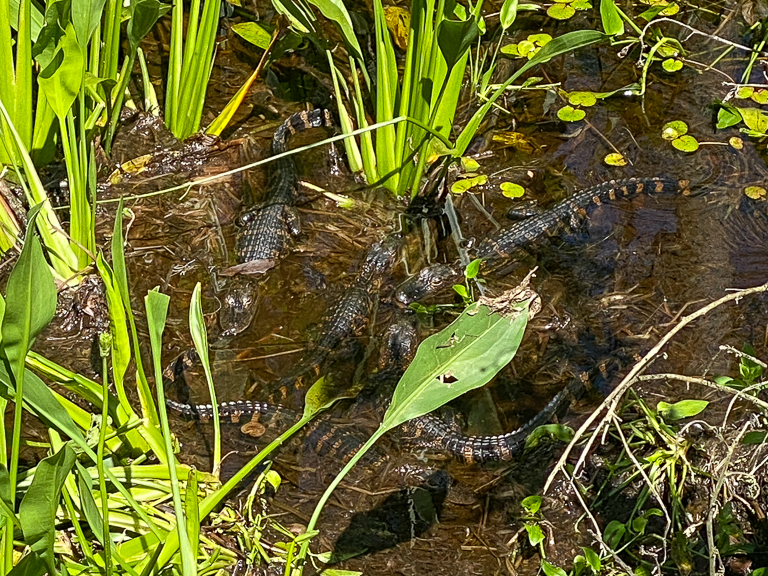 Mama gator (we presume) is always nearby. 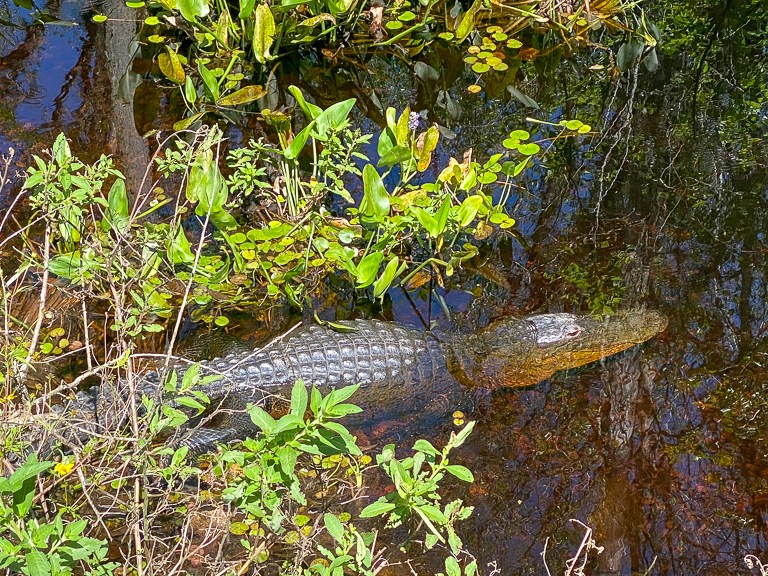 These bike days are great. It's nice to be out in the sunshine and all the fresh air. 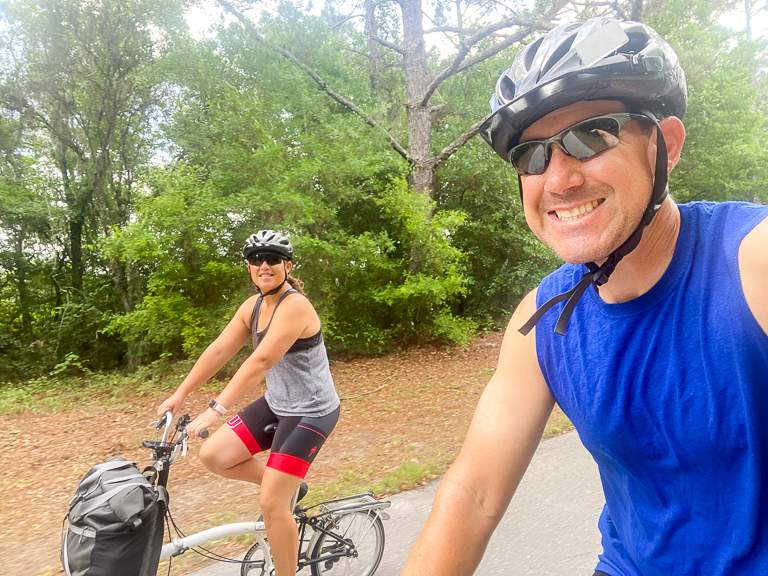 Let's go see Henry! We're regulars so Sven doesn't bark at us like he used to. Now he does little Yips to get Henry's attention, and comes up to the gate to get petted. 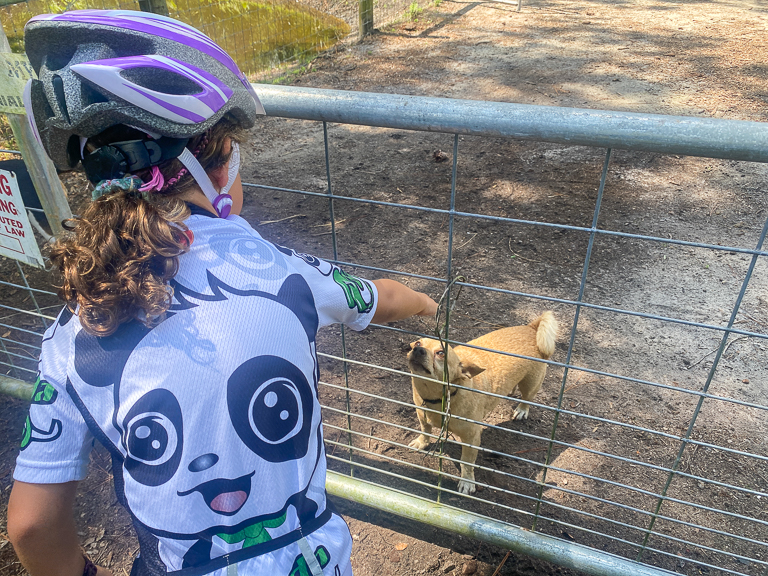 Henry told us that many of the animals enjoy purple cabbage, so on a trip to the store, we made sure to pick up one. The goats are liking it. 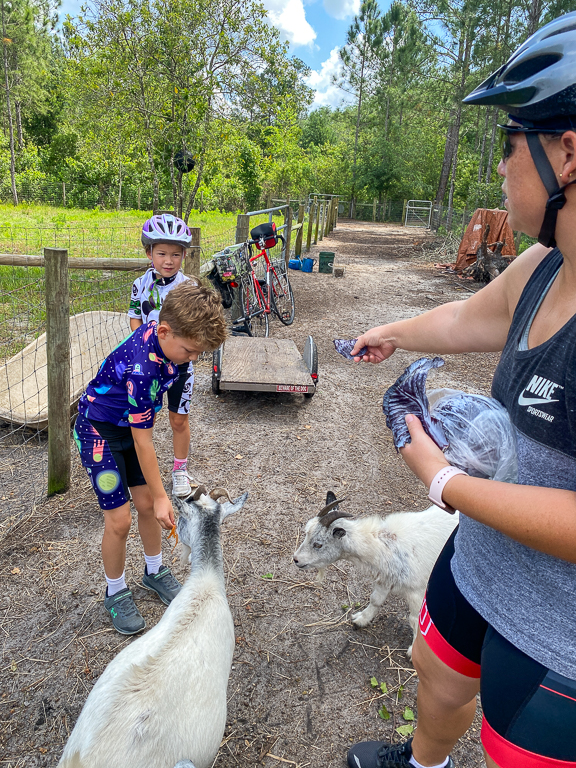 And the horses, Olga and Medusa think it's great. 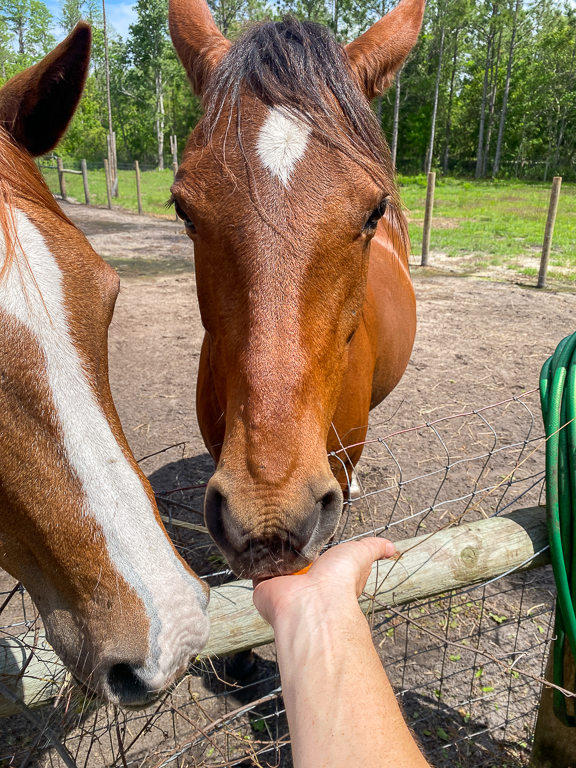 Sven took a couple pieces, thinking he might want to eat some but chewed on them a little bit and then left them for the other animals. 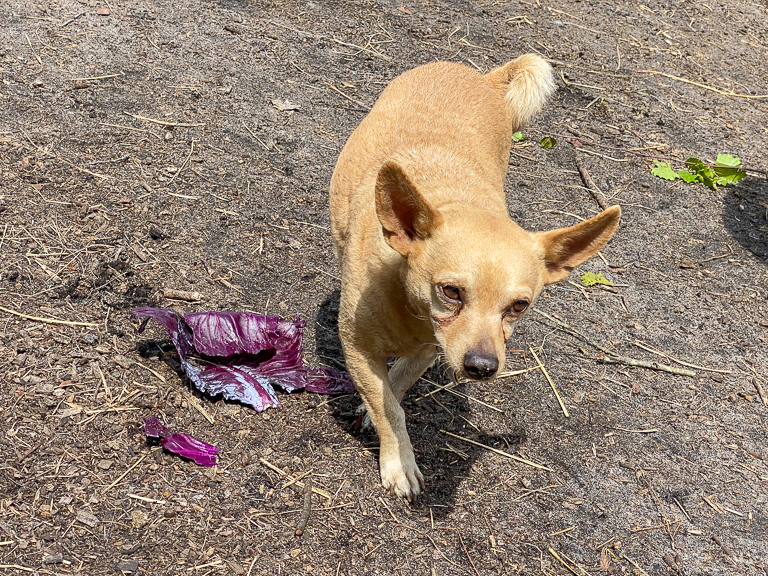 Always wanting to help, the kids asked if they could use the water pump. It's almost like magic. You push on the handle and water comes from nowhere. 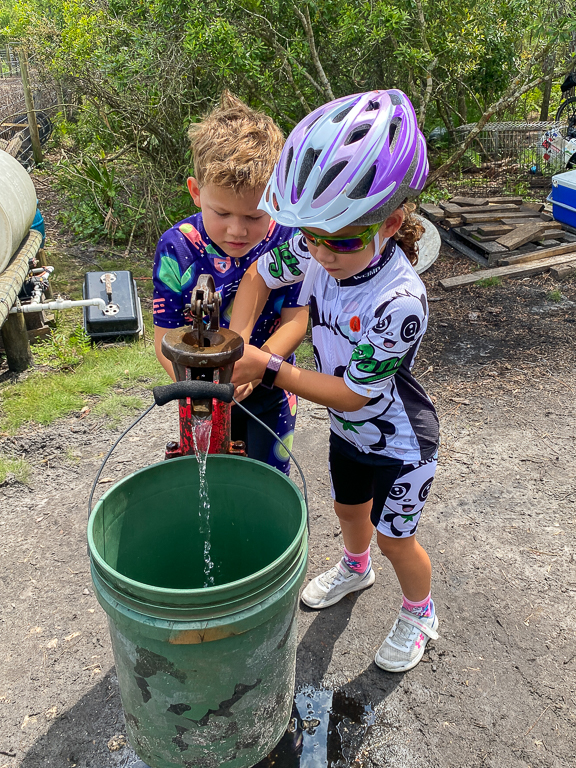 We also brought some popcorn for the chickens. 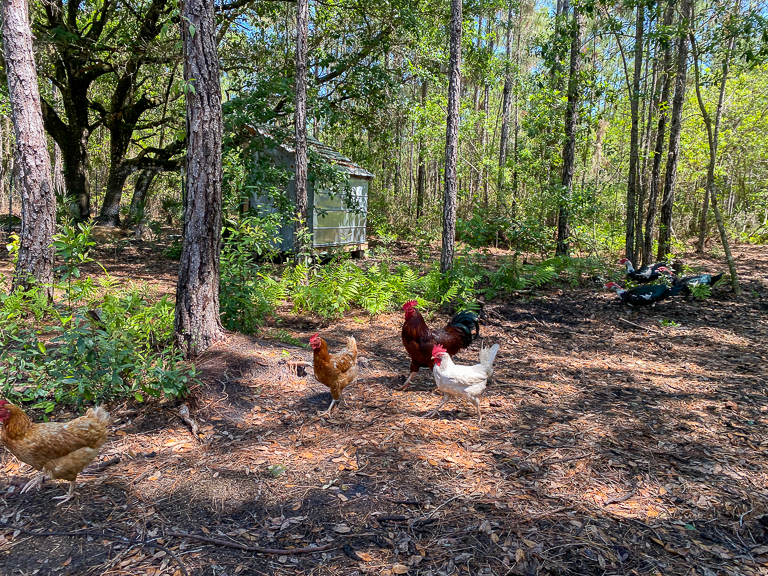 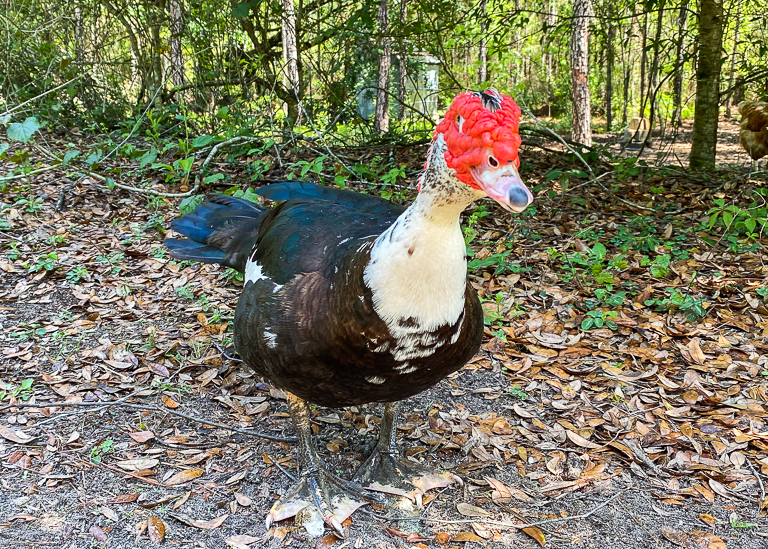 Henry also pointed out a few more edible things. Along the trail there's patches of blackberries growing. None are ripe yet, but come summertime the area will be filled with tasty treats. I guess we'll have to see if any are still there when we come back in October. 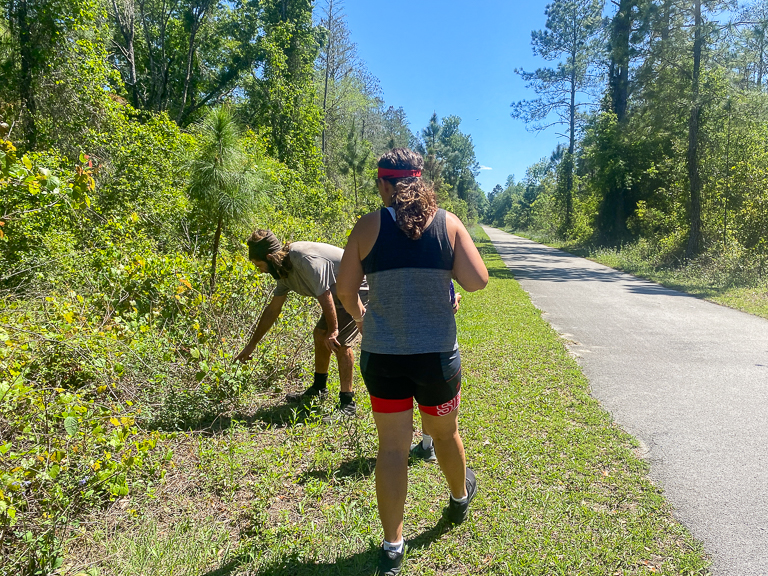 It's hard to tell the size from the picture, but this was a tiny little baby tortoise that the kids just had to have a picture of. It's happily munching the flowers on a nearby plant, then shuffling off to the next one. 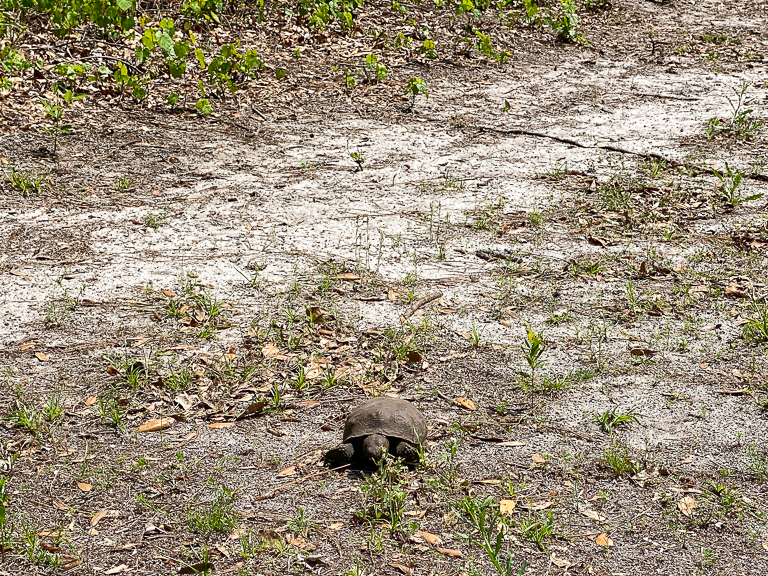 And speaking of tasty things, it's been so long since I've cooked steak myself. I don't have a grill, so I haven't cooked them while we've been on the road. Theresa found some Filet Mignons and after looking for alternate cooking methods, I found one that was sure to be tasty. I brought a pan up to temperature and seared all the sides of the steaks. In that pan I also added butter and garlic cloves, making sure to spoon the flavored goodness over the meat. Once the outsides were seared, the whole pan went into the toaster oven to finish cooking the steaks to the proper temperature. 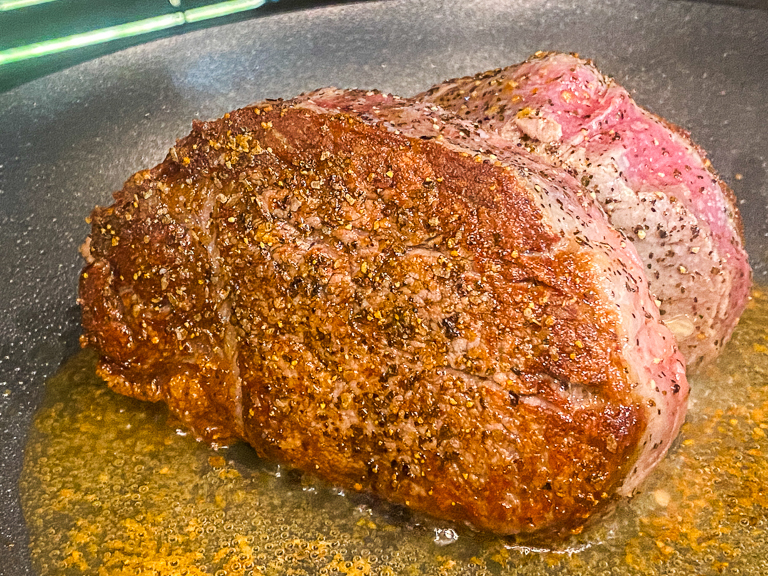 Served with a loaded baked potato, this meal was amazing. I was very happy with how this turned out and will definitely want to make this again. 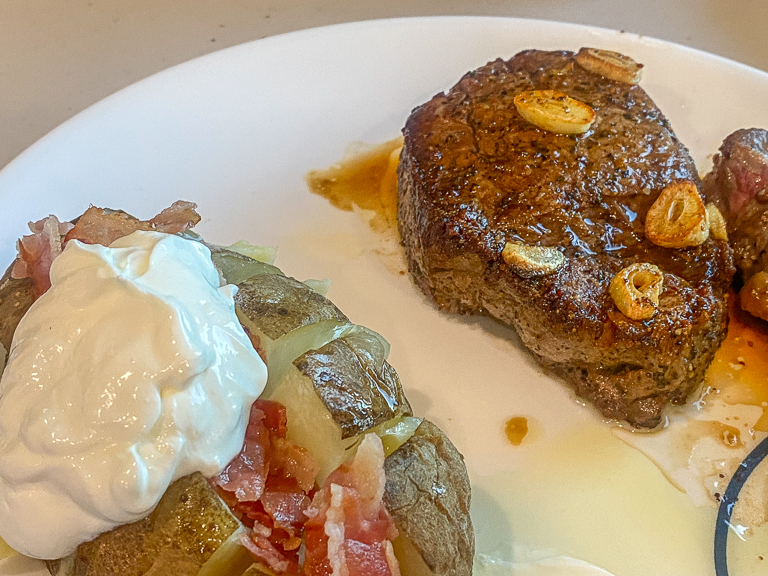 The weather on some days was ridiculous. Windy and heavy heavy rain storms. On those days, we just stayed inside the RV, playing games and watching movies. 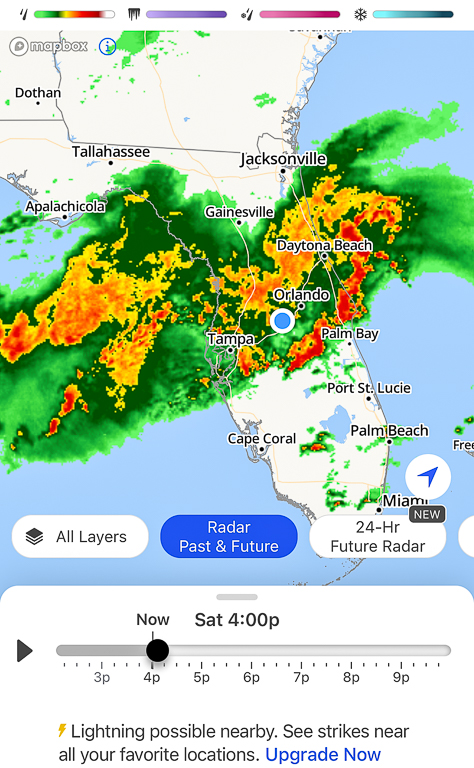 And movies are always best with homemade popcorn. We decided to watch the movie Sonic the Hedgehog since the second movie is coming out so soon. 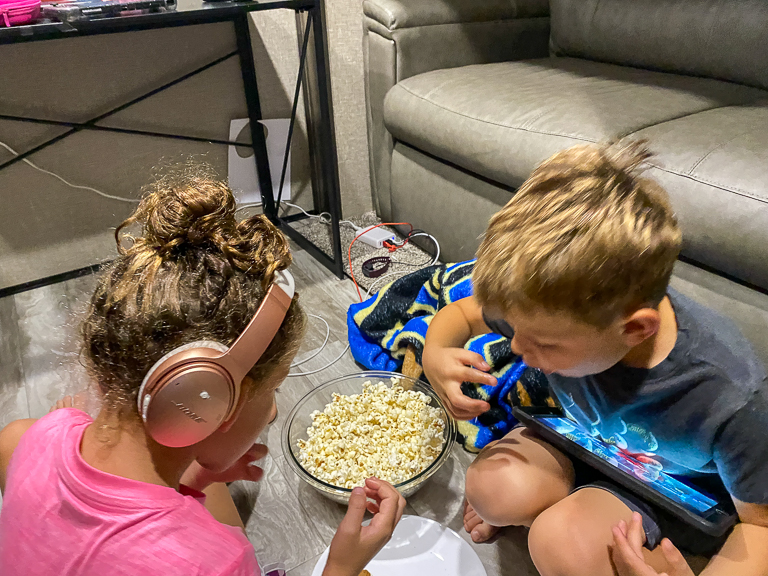 One of the things I've been getting back into lately is running. I've been finding roads around our campgrounds and jogging, mostly at night with a headlamp and light vest. While we've been here in Lake Magic I've seen so many bunnies! Nearly every night I go running there's a half dozen or more frozen in place until I get close, then they start darting away. 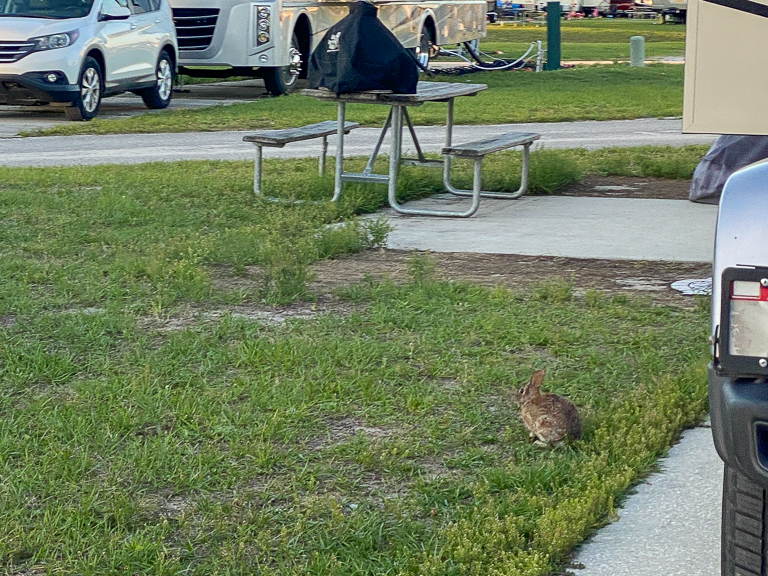 On night as I was running, that headlamp of mine gave me just enough warning to see this guy on the road. I had to hurdle over him, and that sure got my heart racing. I had to return back to get a photo. 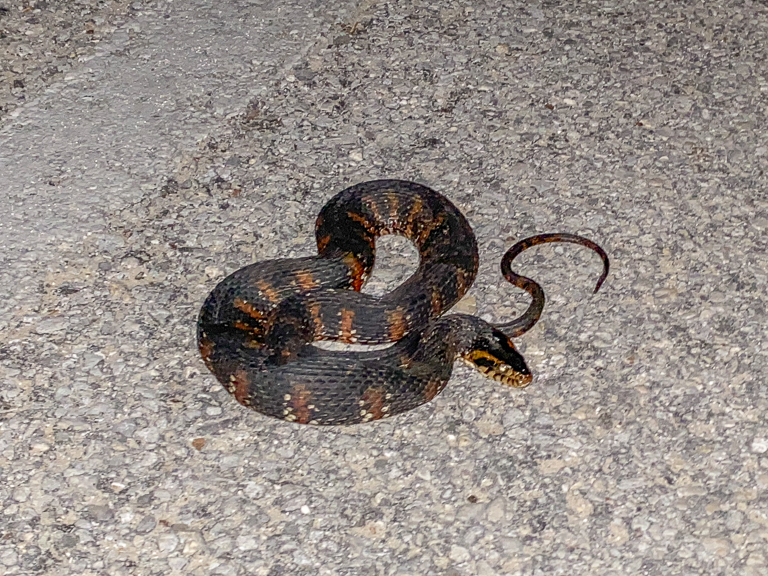 Yikes! I was definitely more cautious after that, and every strip of tree bark or debris got my attention. 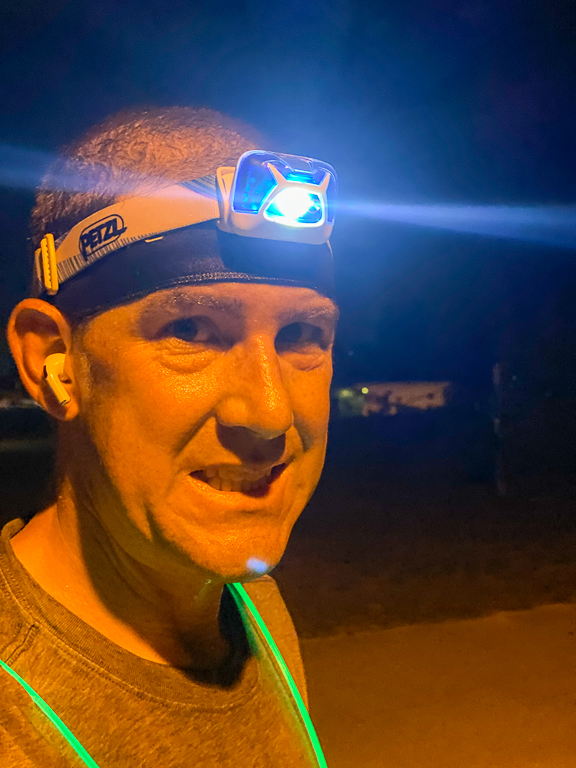 You're right Alli, that does look a Mickey. 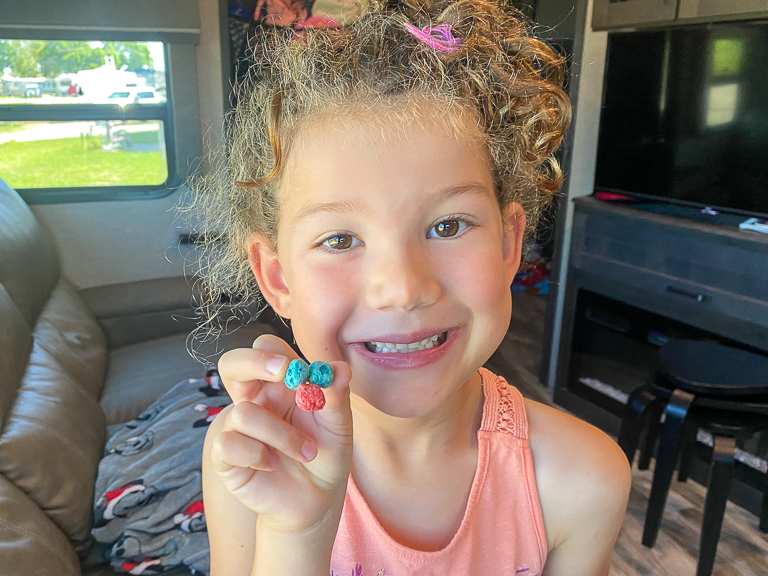 Well after watching the first Sonic, the kids were especially excited to go to the theaters for the first time since the pandemic began to watch Sonic 2! The theater we went to doesn't have slurpees, but they did have a large Dr Pepper and big bags of popcorn.
We bought 2 seats, but they insisted on sitting together for the whole thing. And the kids loved the movie. 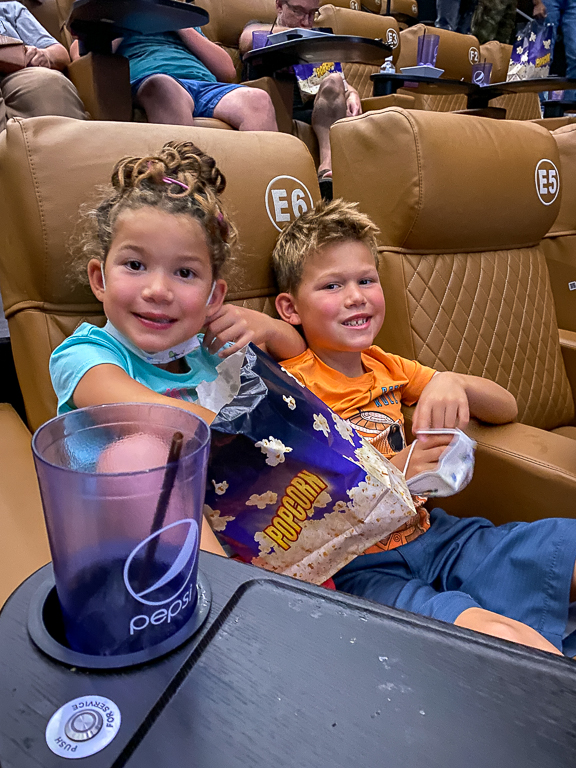 There was plenty more we did in the last 3 weeks in Orlando, but I'll be writing that in another post!