Tonight we've got something special. Something that I'm really looking forward to. Truffle Pizza!

I love the taste of truffles. Whether it's truffle butter on steak, truffle french fries, truffle mac & cheese, it's all especially delicious. So how about we try to capture that in a pizza! 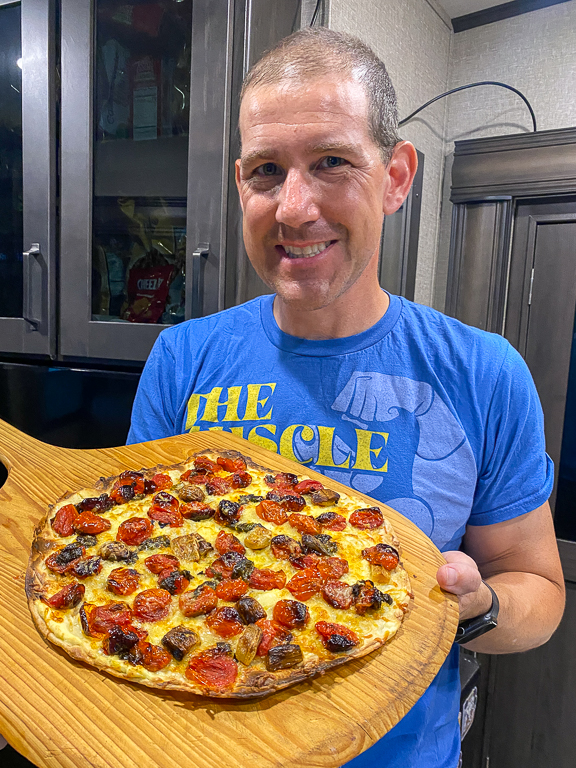 Oh, this poor basil plant. We just use fresh basil too quickly for it. 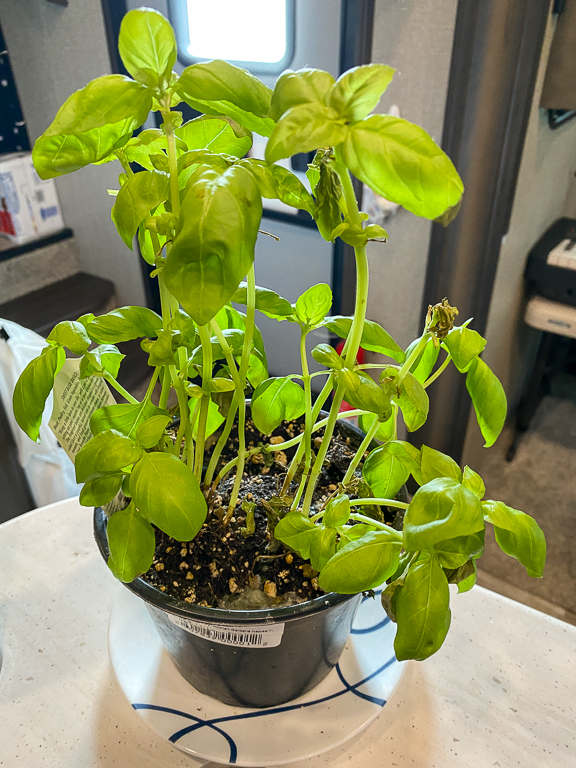 My pizza toppings are based loosely on a recipe from heb.com. It's starts with a pint of cherry tomatoes, 10 cloves of garlic, and a handful of basil leaves. 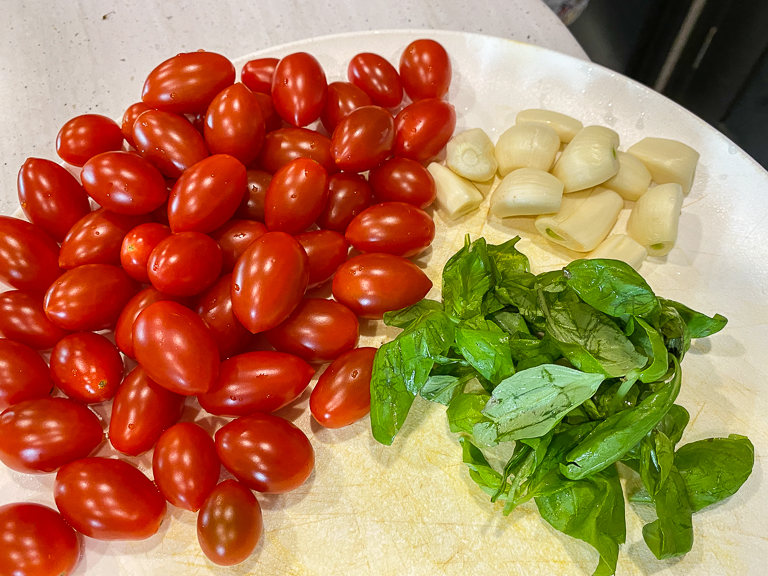 Those get drizzled in oil, then mixed thoroughly. 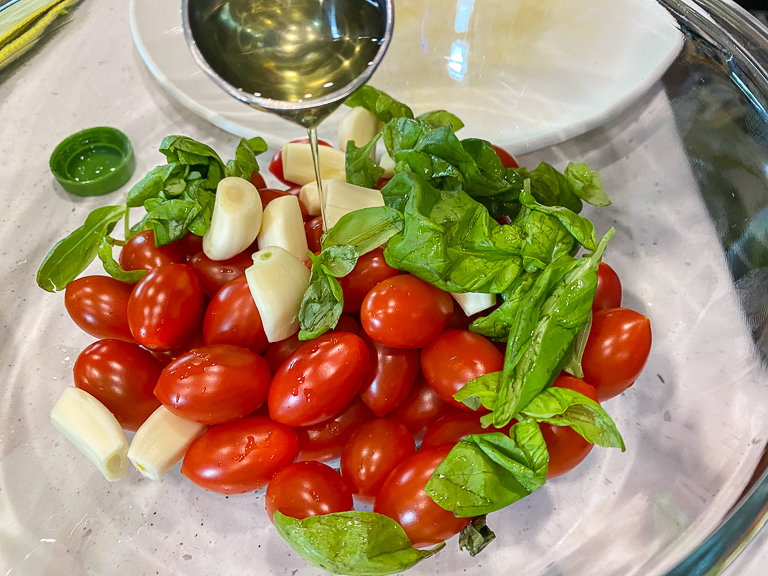 Next they go into an oven, roasting at 400F for 30 minutes. I turned on the convention setting so lots of hot air would be hitting these ingredients. 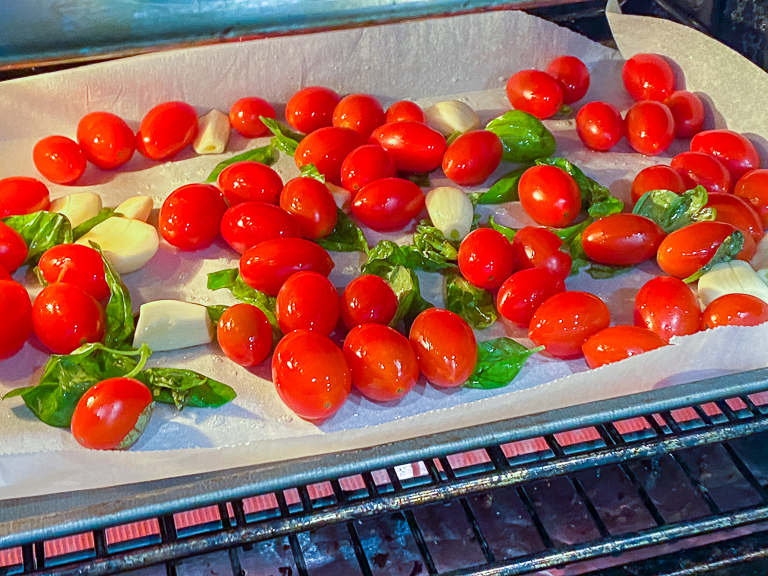 And yes, this is looking great! Those tomato skins are definitely blistering. The garlic is roasting. That's going to be delicious. 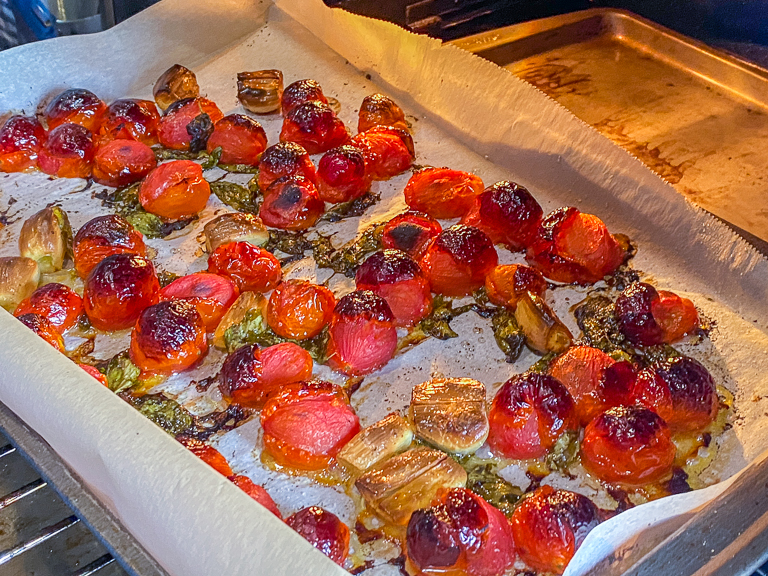 In an effort to get more truffle flavor into this pizza, I'm going to give it a tasty base. The original recipe just says to "drizzle truffle oil on top" after the pizza is baked. We can do better than that. Instead of a tomato sauce base, I'm going to be using cream cheese. 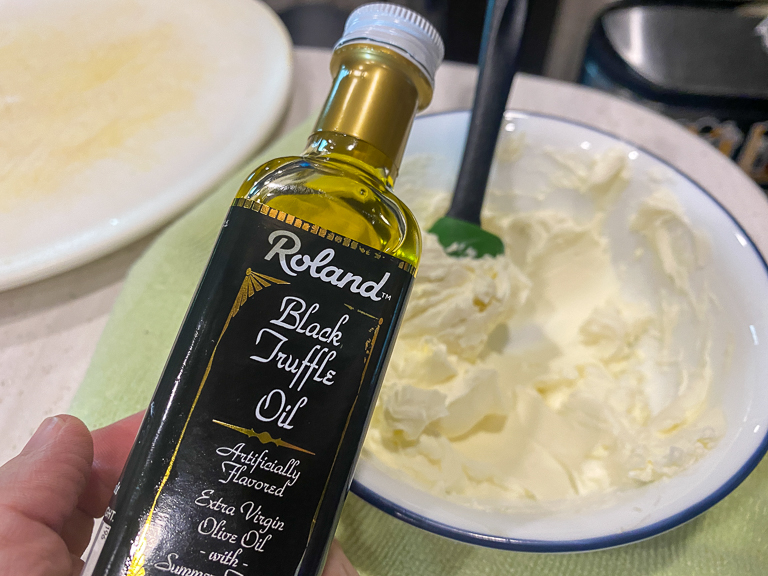 A little bit of truffle oil mixed in with the cream cheese will be delicious! 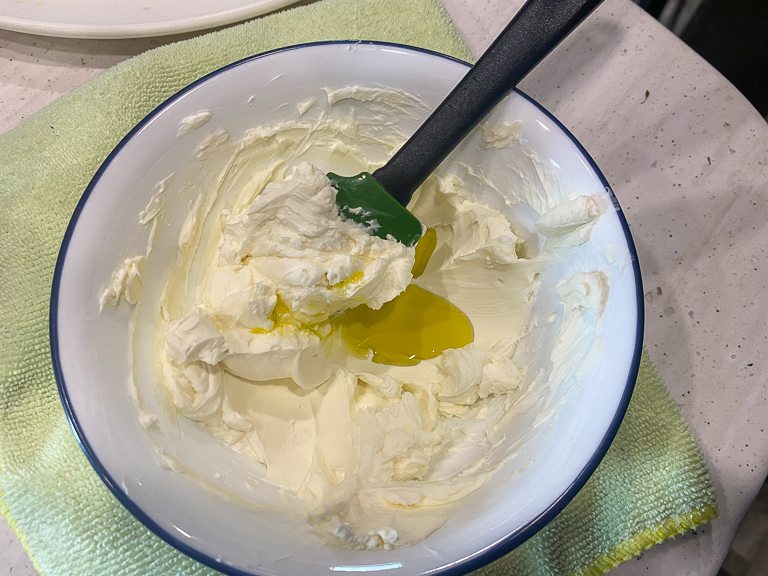 My toppings tonight. I've let my tomatoes, garlic, and basil cool down before adding them to this pizza. I get to lick the cream cheese spatula. Yum! 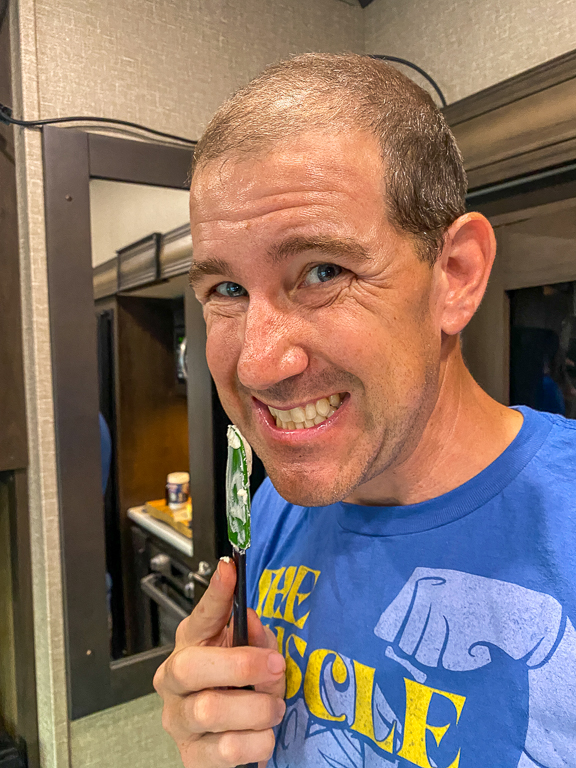 The cream cheese base gets a light dusting of mozzarella. 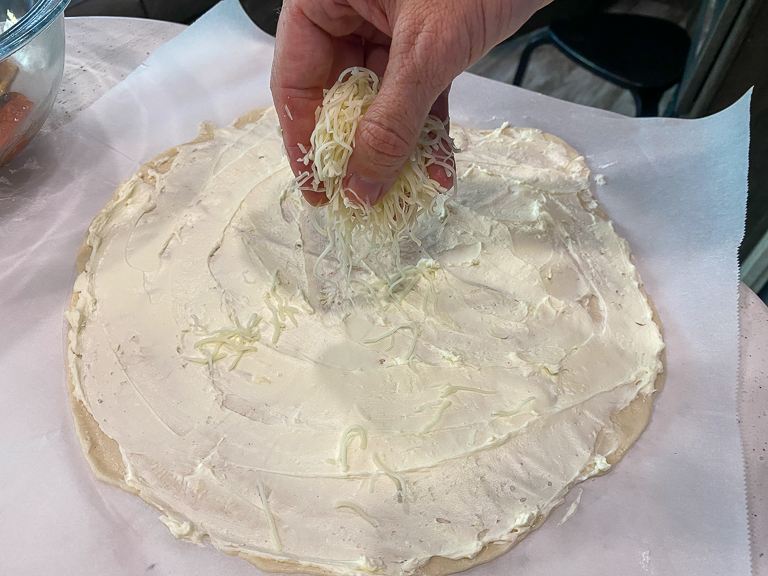 All my toppings go on, plus a little freshly shredded Asiago cheese. Finally I drizzled more truffle oil over the top of the pizza. 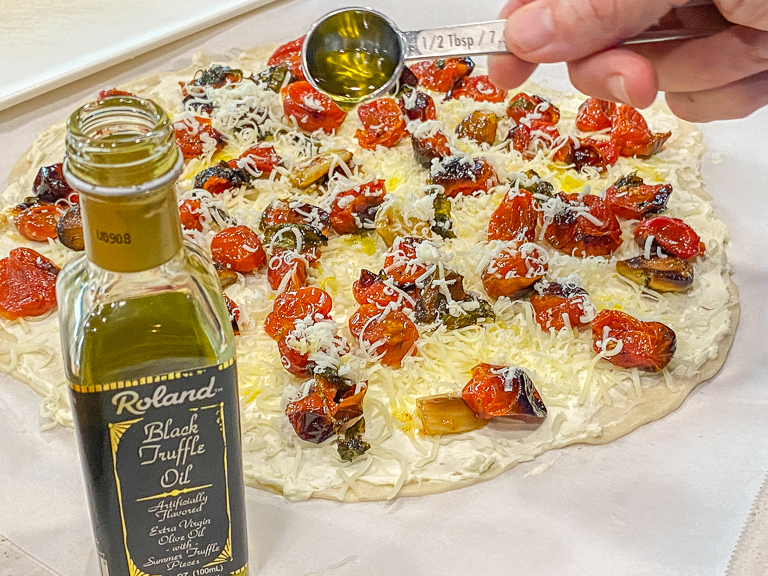 And after cooking, it's looking and smelling fantastic! 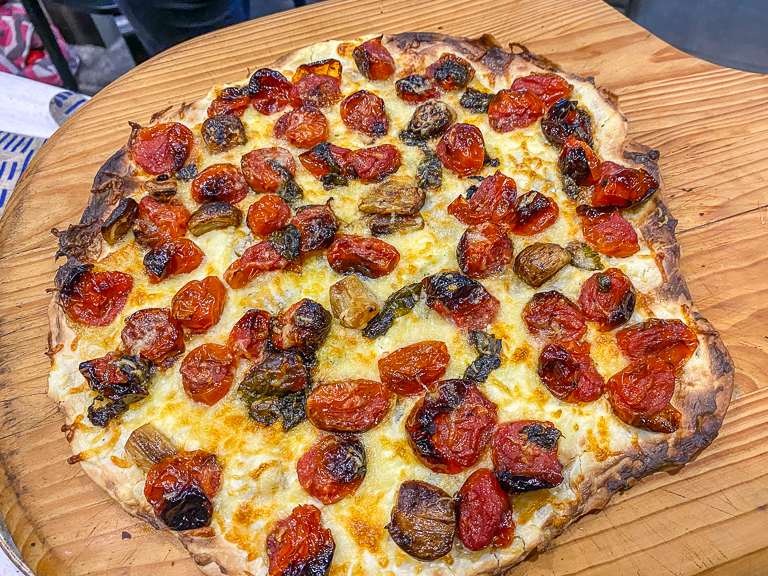 The kids were excited to make their own pizzas tonight. My only contribution was flattening out the dough. They added the sauce, cheese, toppings, and cut that excess parchment away before cooking it. 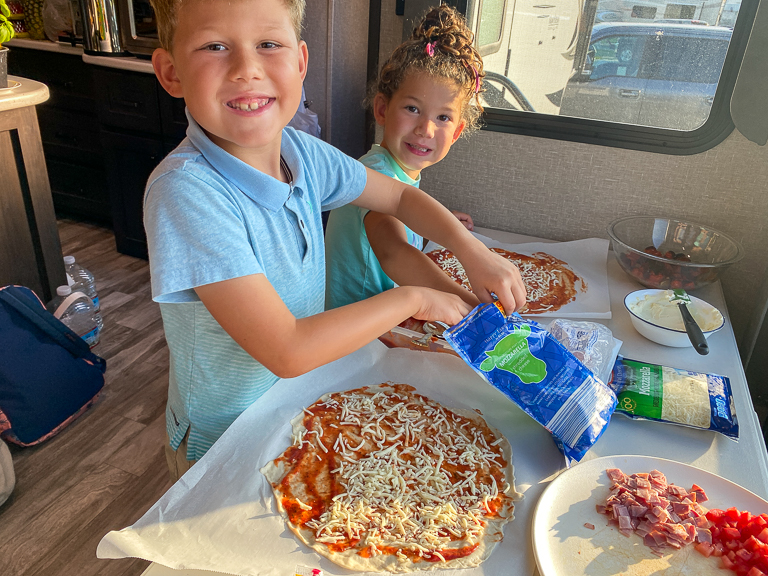 Ian's going with a half pepperoni and half cheese this time. Finally he's had his fill of pepperonis. 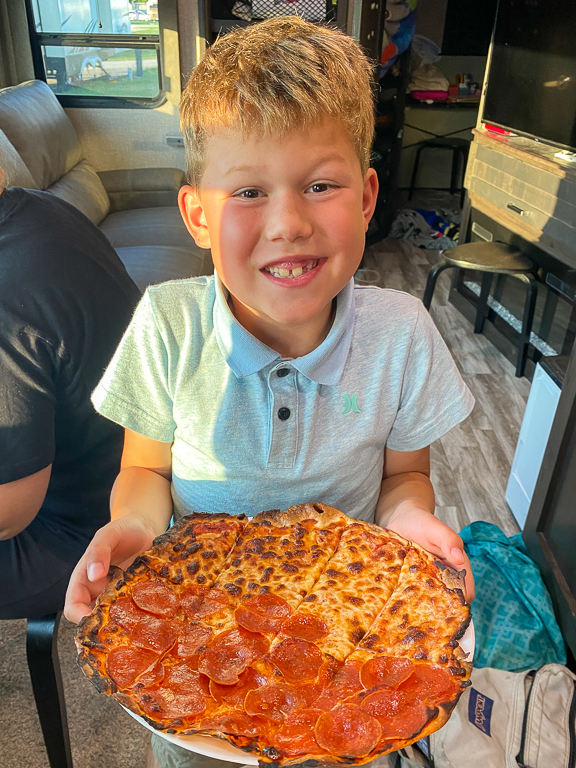 Alli opted for ham, and then kept asking for more toppings. "Can I use your tomatoes? Do we have olives? Ian, can I have some pepperonis?"
She was going for a Minnie Mouse pizza, with a bow, ears, eyes, and a smile. 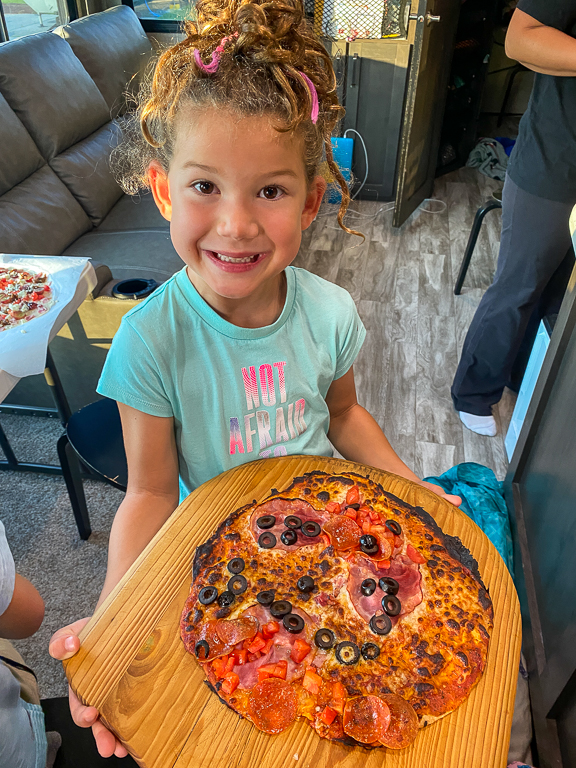 And it's really hard to improve on Theresa's pizza, the Therizza. I thought the pizza from the Napa Rose was the best pizza ever. This one is better. And I get to eat it every week now! 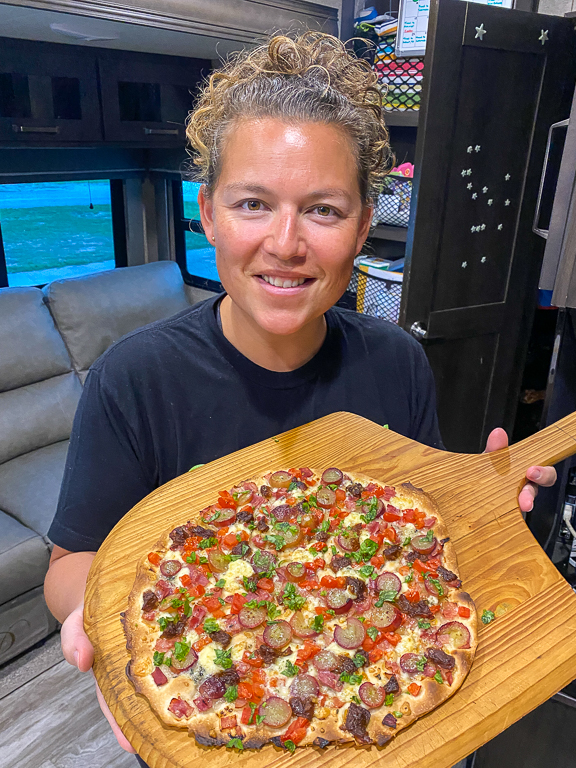 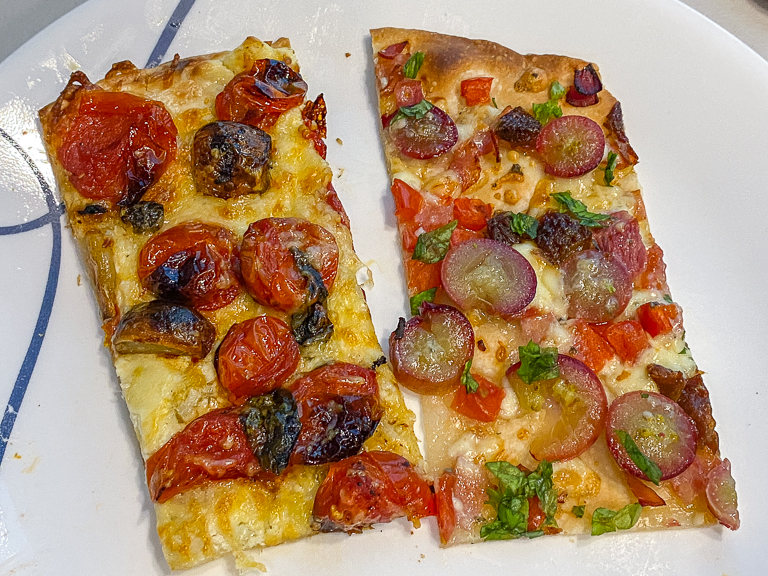 The truffle pizza was delicious! Theresa likes truffle, but doesn't like the truffle to be overpowering. This pizza was just right for her. The blistered tomatoes were yummy, and the random piece of roasted garlic were a happy surprise. Theresa suggested that it was a bit too much cheese for her, though I was happy with it. She said it tasted like a very sophisticated pizza. One that you'd pay a lot for at an expensive restaurant.
Since I love truffle, I even drizzled a little more truffle oil on top of my pizza. Perfection! I would make this one again! 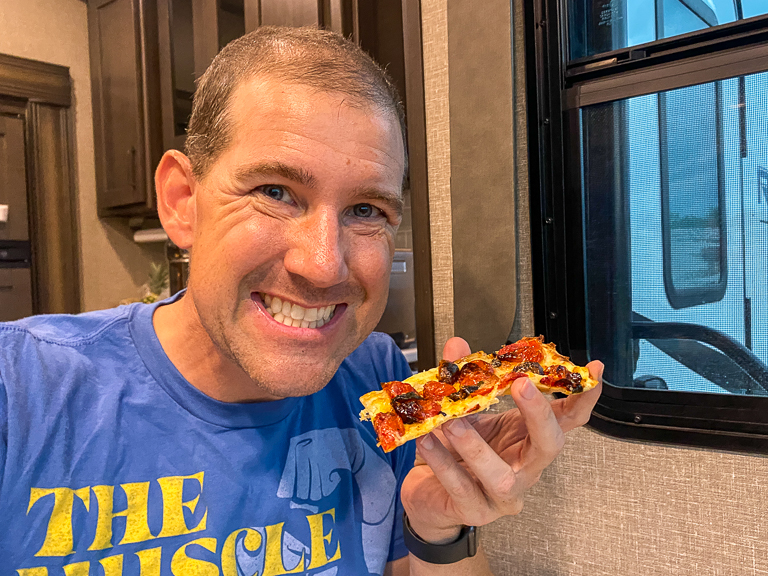 Oh, you poor, poor basil plant. It never did stand much of a chance in this household. Fresh basil on pizza is too tasty! 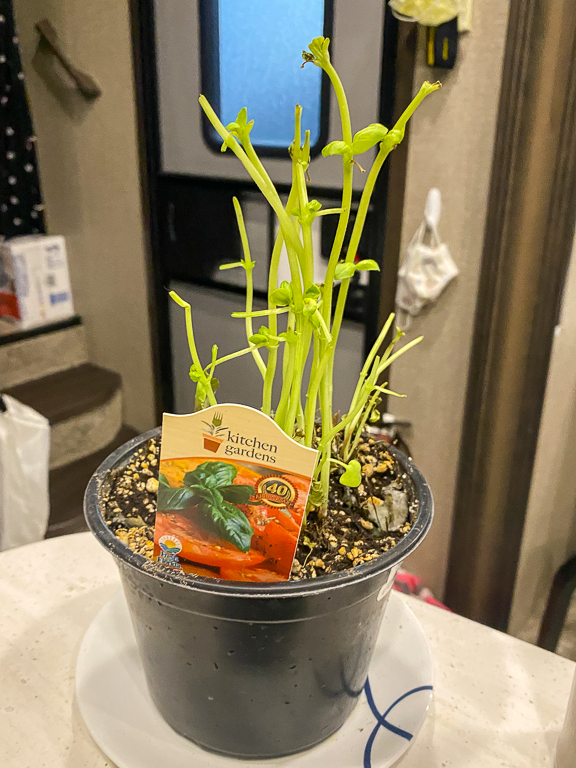