Made at Home - Cubano Sandwiches

As Theresa and I were driving down from Orlando the Miami, we started discussing the meals we'd be making for the coming week. Ooh, since we're in Miami, we should theme some of our meals to the area. Theresa suggested that we should make Cuban sandwiches and I thought that sounded perfect! Let's do it! 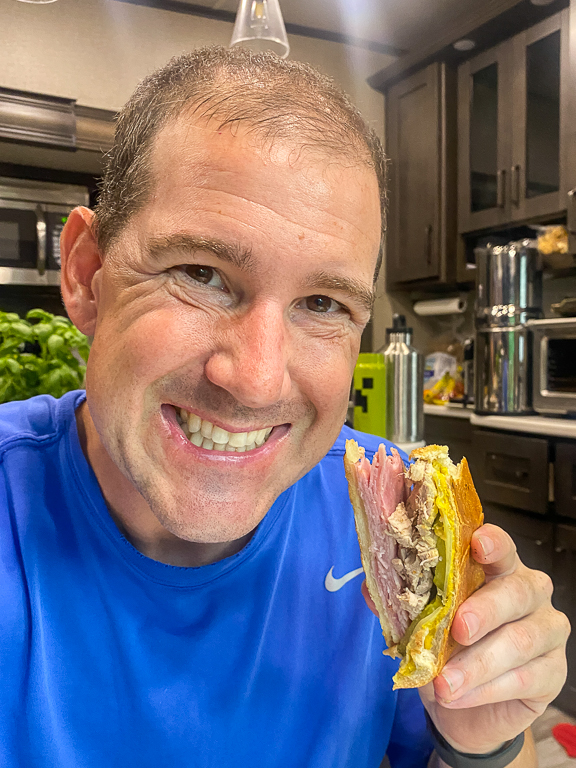 I took my inspiration for the sandwich from TheRecipeCritic.com. There's just a few ingredients we'll need, and then one that we're going to make. There's smoked ham, swiss cheese, mustard, pickles, and sliced pork tenderloin. We're going to be making the pork tenderloin ourselves, and the kids both wanted to help. I asked them to help me measure out the spices, like Oregano. 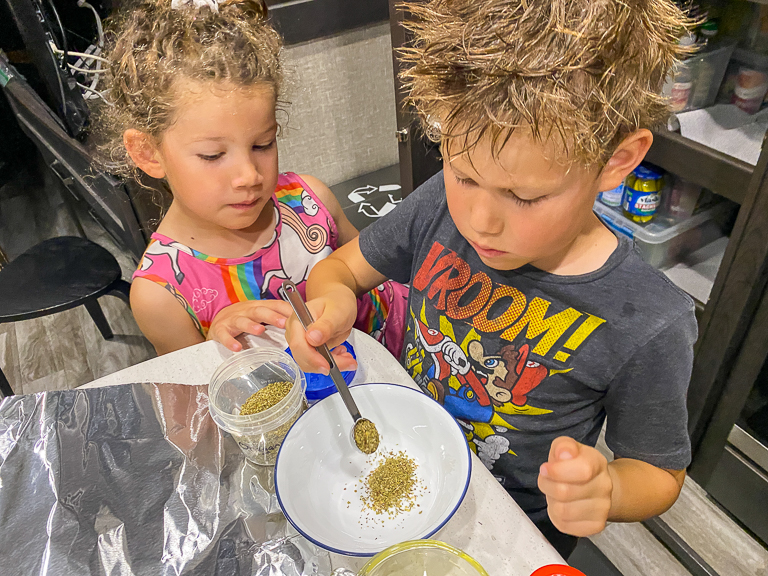 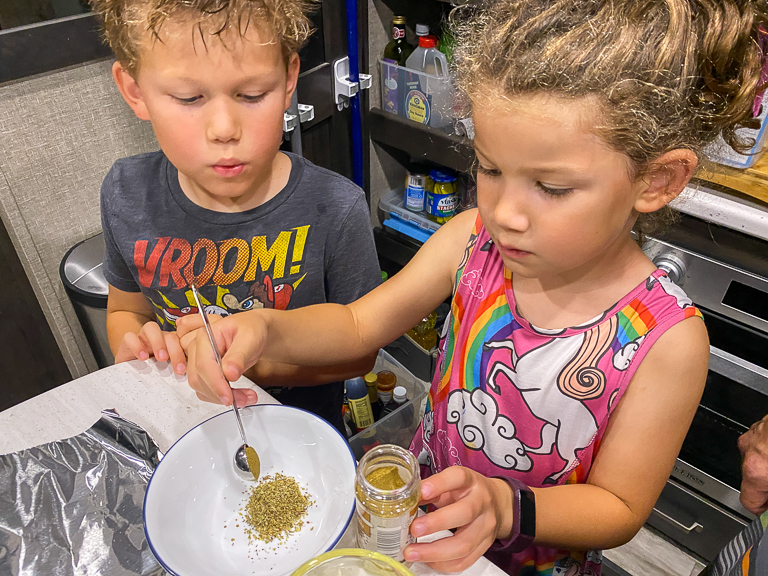 I'll be mixing lime juice, orange juice, fresh garlic, oil, cumin, and oregano and pouring it over my pork tenderloin. 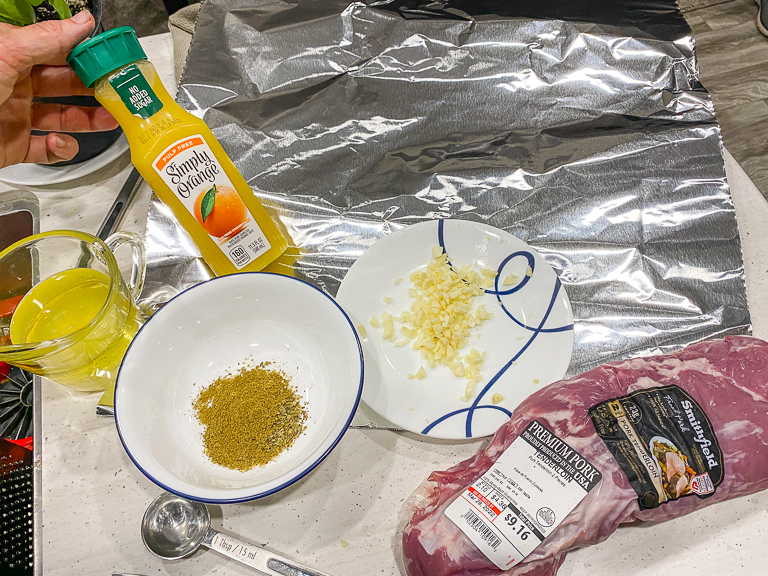 I placed my pork tenderloins on a tray and poured my marinade over it. 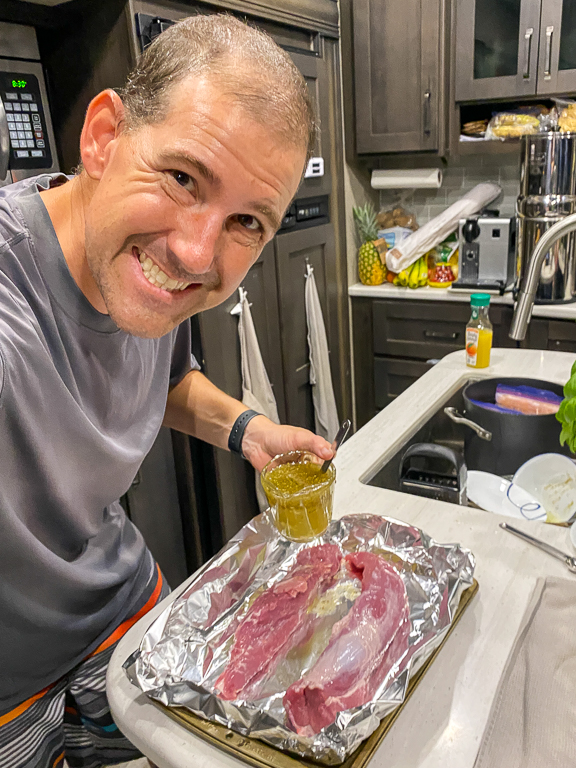 This cooked for about 40 minutes, until the pork was 145F in the center. 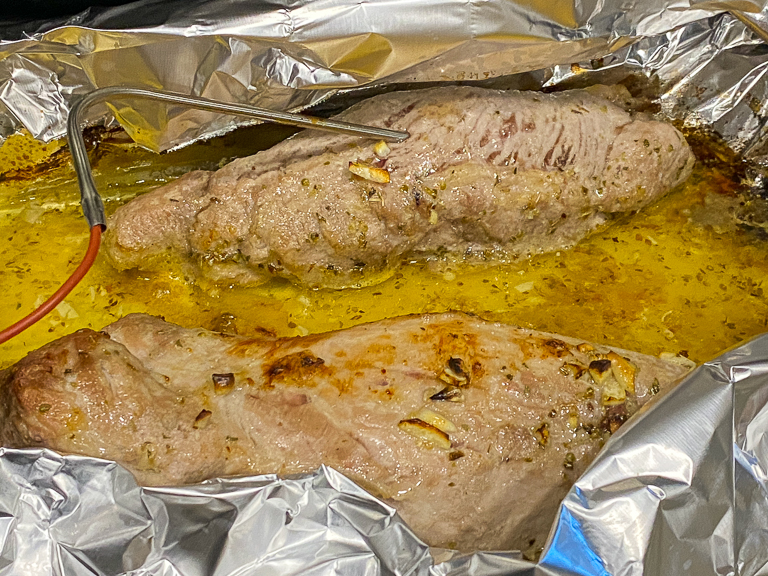 After letting it cool, I cut it into slices then tossed it back in the marinade and into the fridge. Hopefully that'll give it some time for the flavors to absorb into it. 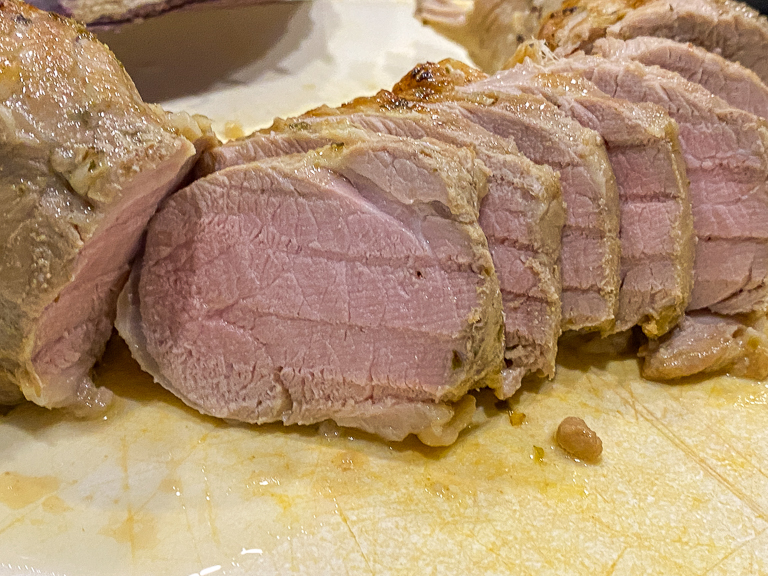 Wardrobe change! Actually it's the next day. I warmed everything back up in the oven, then cut it into chunks for my sandwiches. 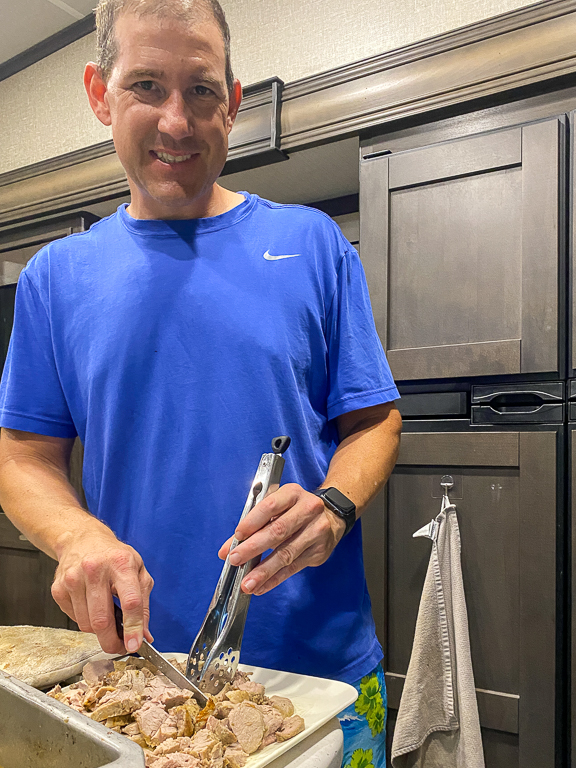 While I'm working on that, Chi was cutting up a pineapple to have along with our sandwiches. Yum! 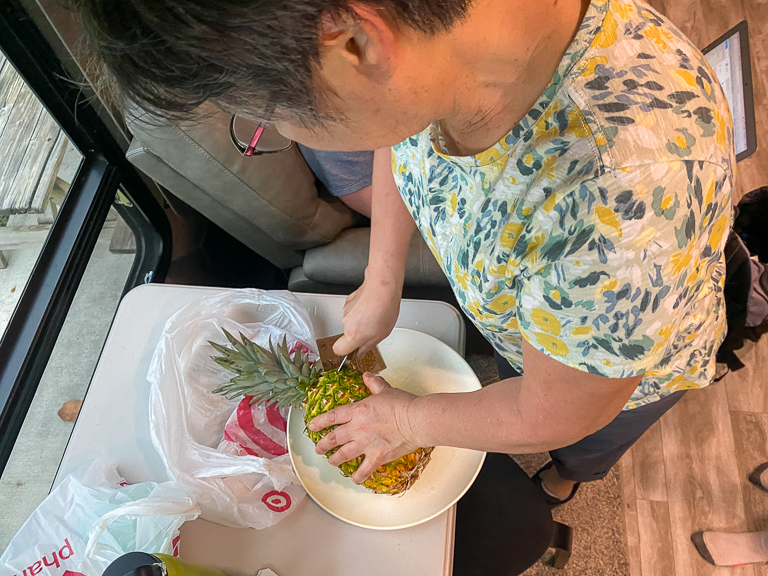 And I thought a tasty dessert might be these cookies/biscuits from Chile.
I was fortunate to find a loaf of Cubano bread to make my sandwiches with! 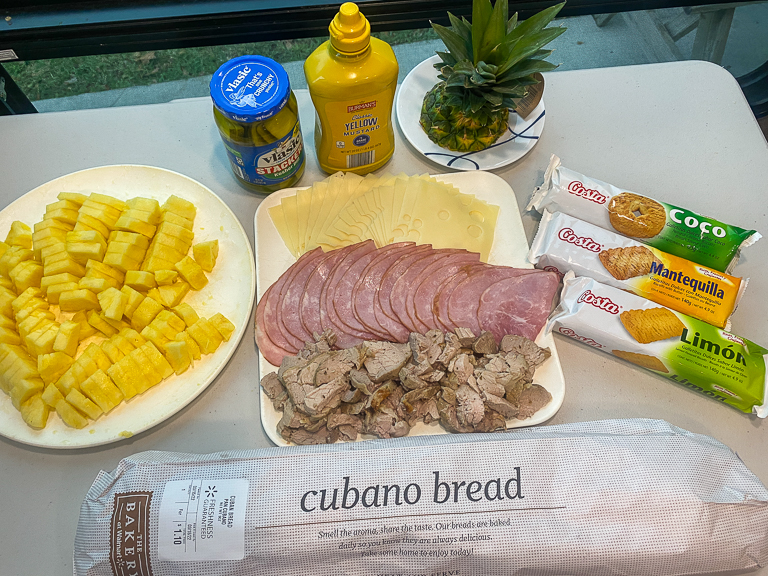 From the bottom to the top, I loaded it up with swiss cheese, lots of smoked ham, my pork tenderloin, pickle slices (even though I don't love pickles), more swiss cheese, and a healthy layer of mustard. 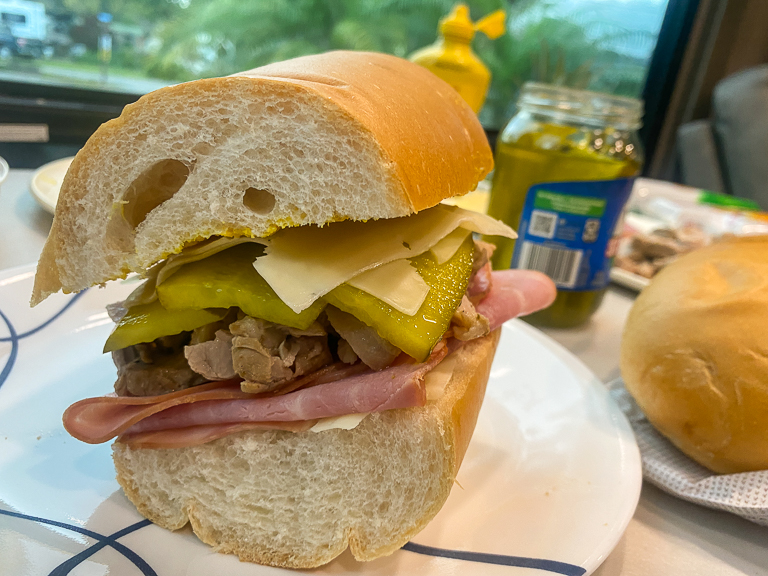 There's no sandwich press that comes with the RV, so I made due with a couple pans and my electric burner. 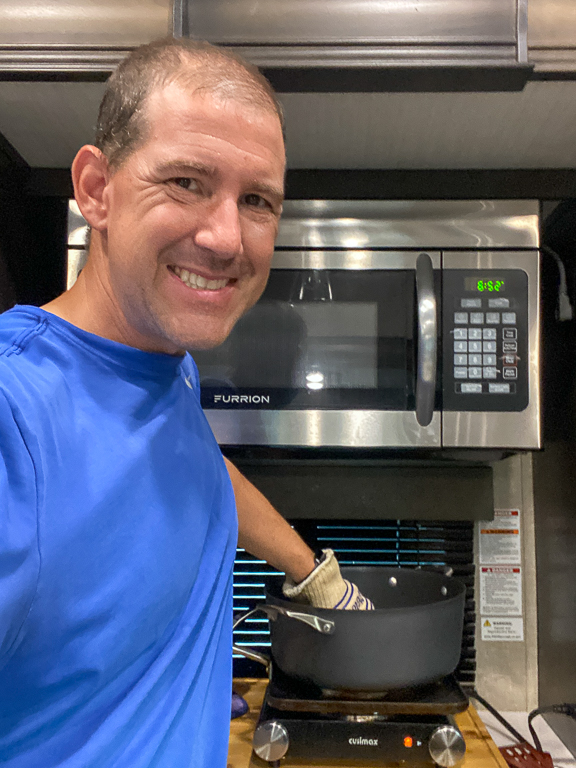 I put down a good layer of butter and then squished my sandwich flat. When it was nicely toasted, I flipped it and did the same thing to the other side. 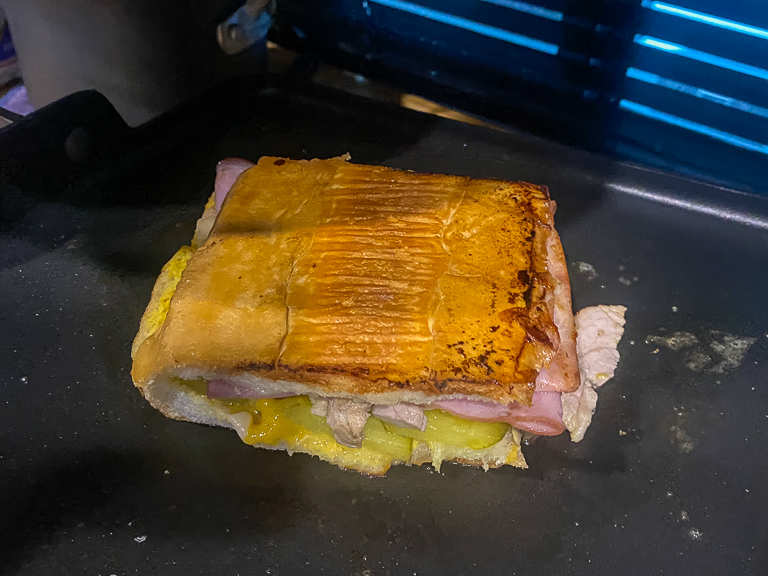 That fluffy Cubano bread above is flattened but has a crunchy texture now. 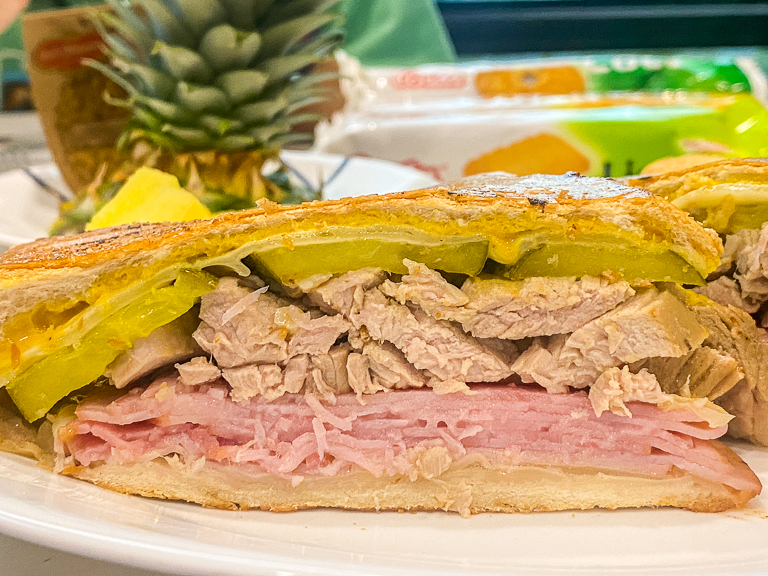 That's a good looking plate! Even with the pickles, my sandwich was amazing. All the flavors came together wonderfully. The pineapples were delicious, and the cookies reminded me of the tropics. Of the three cookie flavors, I liked the coconut and lemon the best. The butter cookie was just okay. 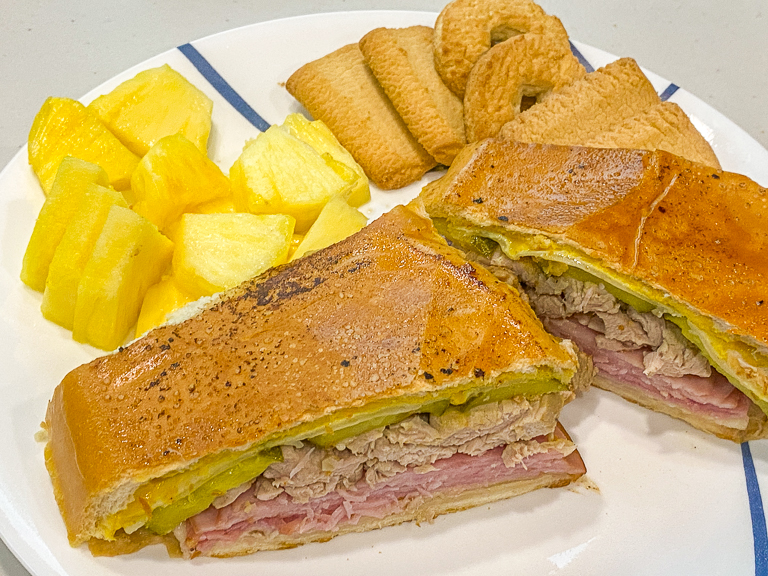 As I was assembling the sandwiches, Ian wasn't too thrilled with tonight's dinner selection.
Ian - Can I just have ham and cheese?
No.
Ian - Can I have ketchup instead of mustard, and no pickles?
No, this is dinner tonight. 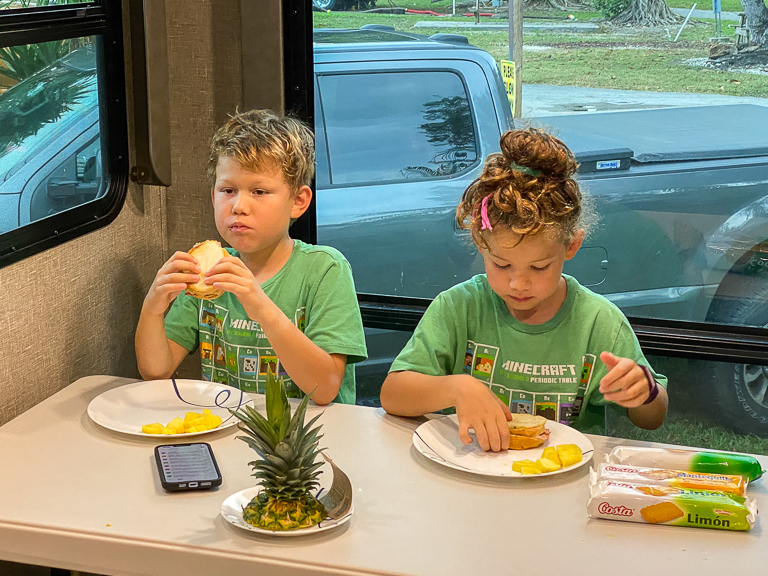 After tasting it.
Ian - That's probably my new favorite sandwich! Better than my pepperoni sandwich! Mustard is the key to making this! Can I have another just like it?
Well I'm glad he gave it a fair shot! Now he's asking how often we can have them.
This was a great meal tonight! 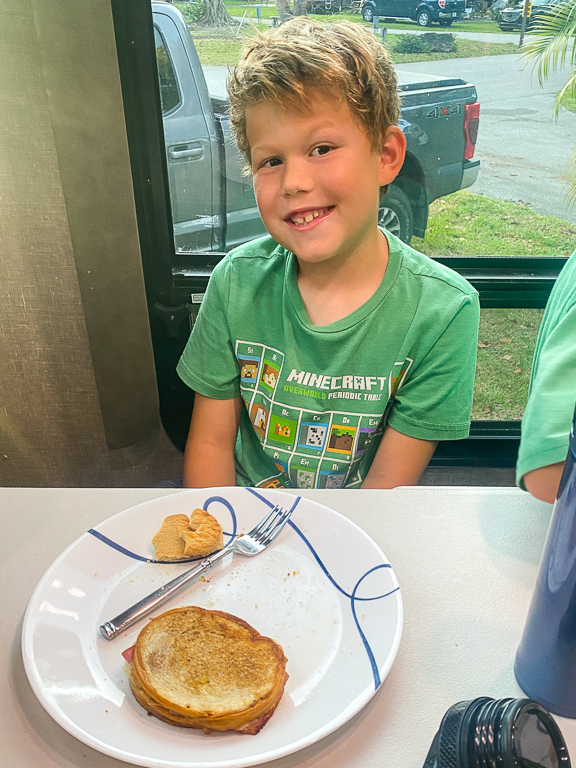