The kids spent the morning at Hollywood Studios with their cousins, now it's time to hang out with their parents at Epcot! The Flower & Garden Festival is starting up soon! 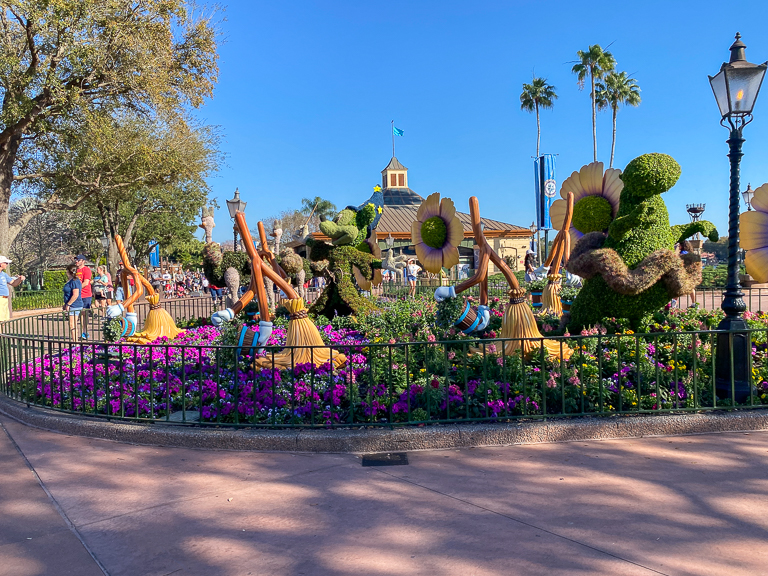 I think our first stop in Epcot should be Club Cool. Who can resist free soda. 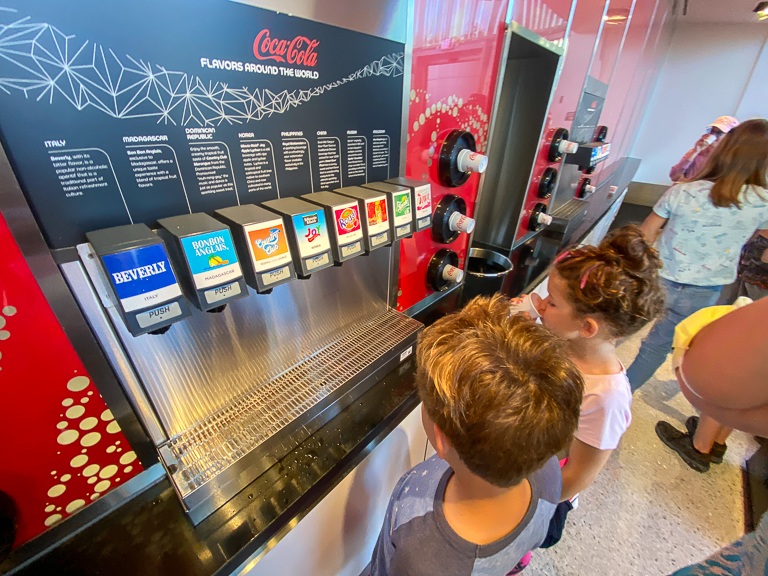 Theresa made Rice Krispy Treats while we were at home to share with everyone.
Mmm, these always make me think of the ones Jacob would make and bring to Disneyland to share. We sent him a quick video saying we missed him. 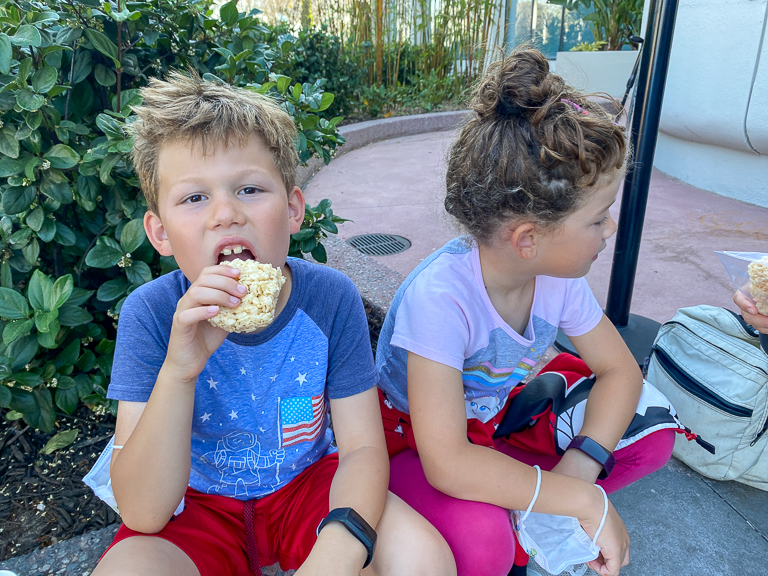 Afterwards, the four of us went on Mission Space Green. 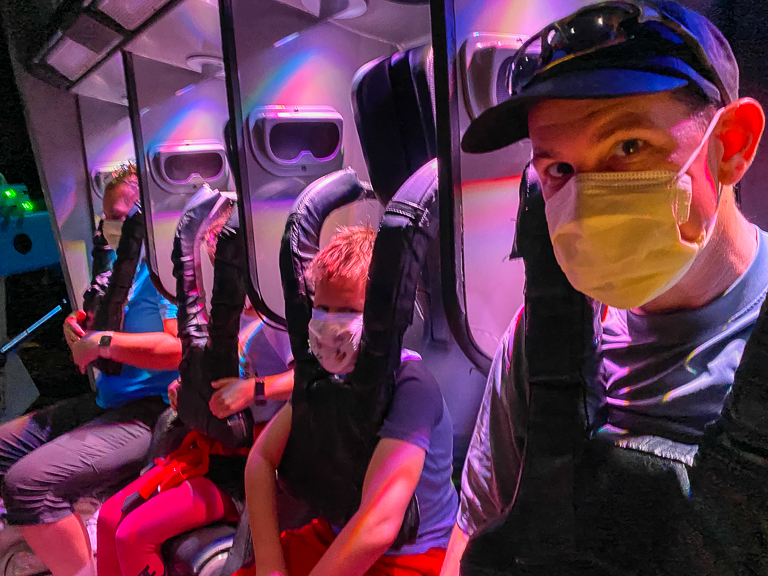 And the kids and I went on Mission Space Orange. 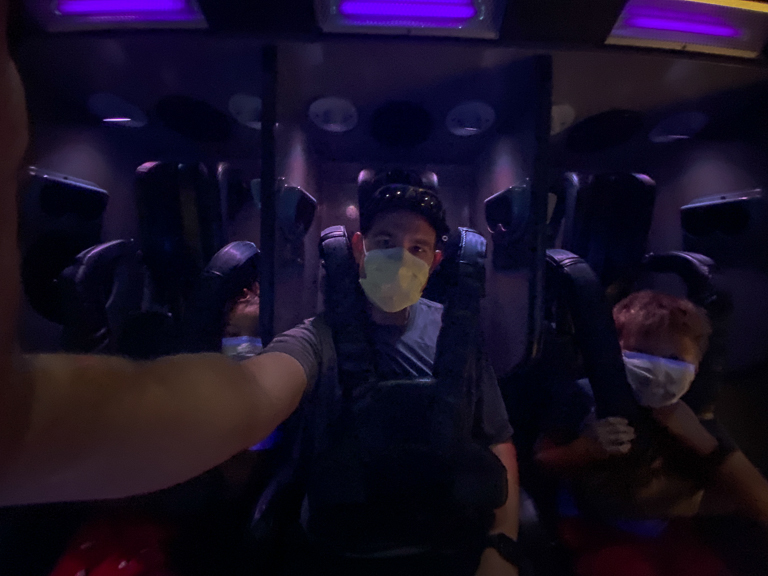 For dinner, I made hamburgers just before we picked them up. They hold up pretty good in a thermos. 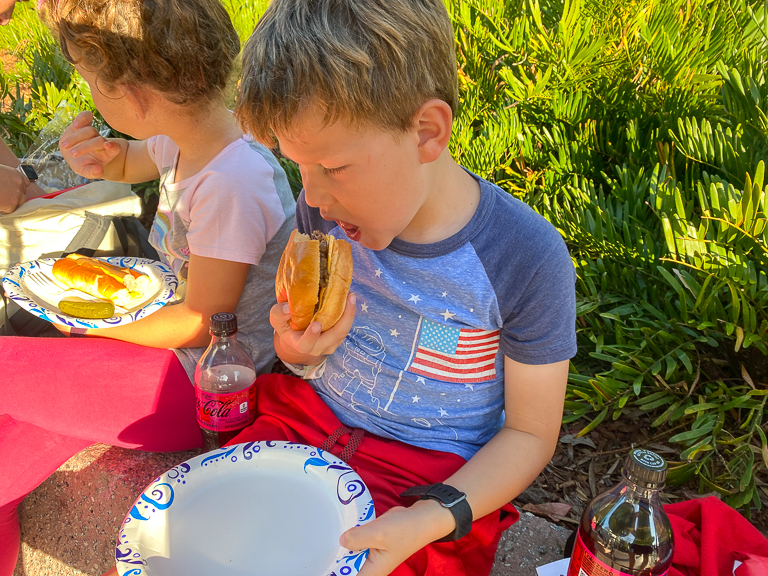 Add chips and a bunch of fruit and you've got a hearty meal. 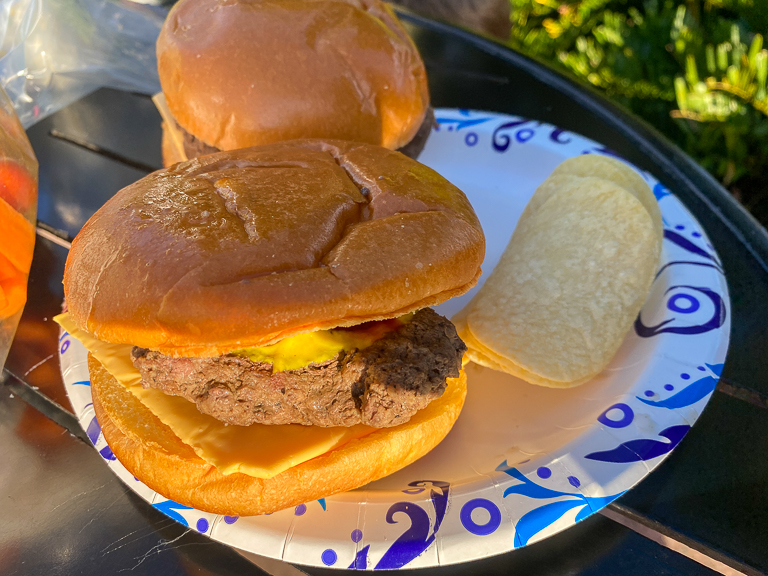 Since the cousins decided to spend the rest of their day "eating around the world" and not doing rides, Theresa and I were able to use their Genie+ reservations for ourselves. Knowing this, earlier I grabbed a reservation for Soarin, which was nice to skip the line on. Then, seeing that The Land was a short line, opted to take a ride on that. 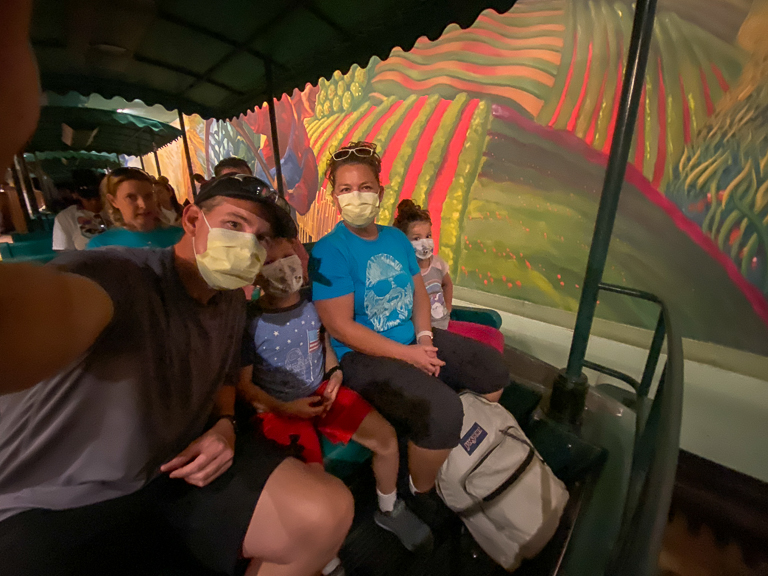 Ever since dinner, Theresa and I both were going back and forth on the Genie+ app, trying to find a decent ride to go on. All the big ones had sold out earlier in the day, and there's also the limitation that you can't use Genie+ for a ride twice. Finally after hundreds of tries (again, no lie) a reservation for Test Track opened up! 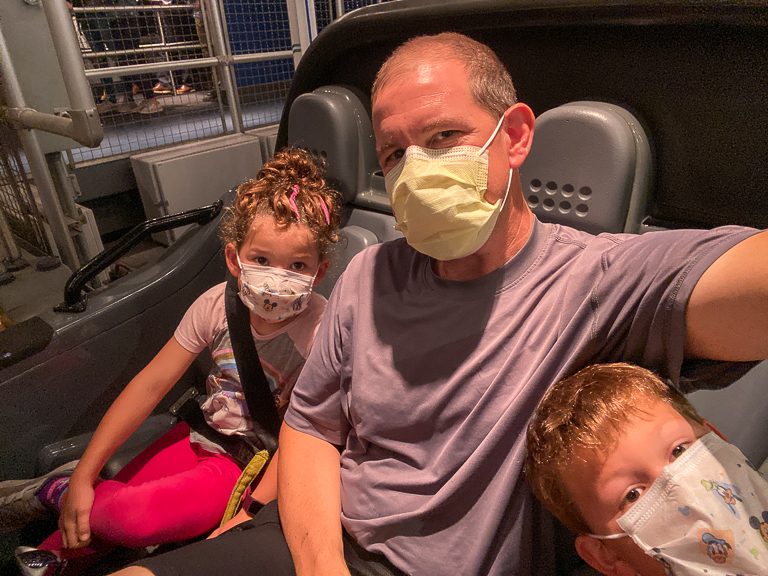 Instead of the 70+ minute wait, we were able to bypass the line, build a car, and hop on the ride. For some reason the kids wanted to ride with me in the back this time. Everyone likes it when we go fast. 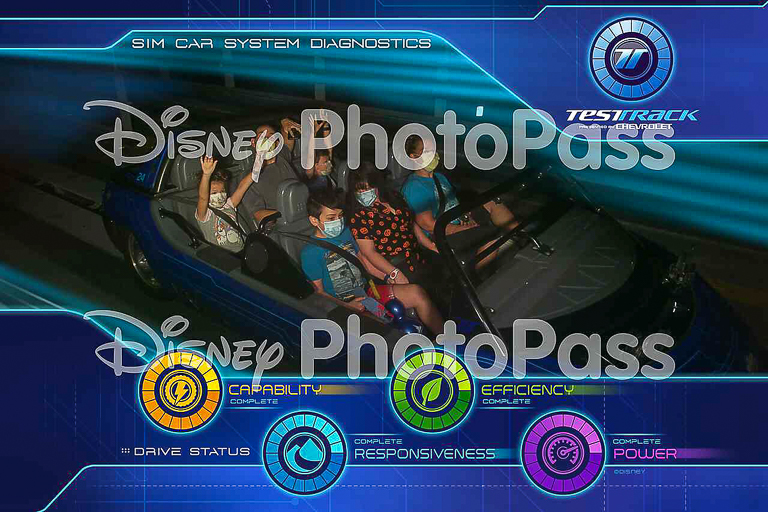 Completely by random chance, we ended up at Club Cool again right as the cousins and their friends arrived. It's a small world after all!
Let's all go taste some sodas together! 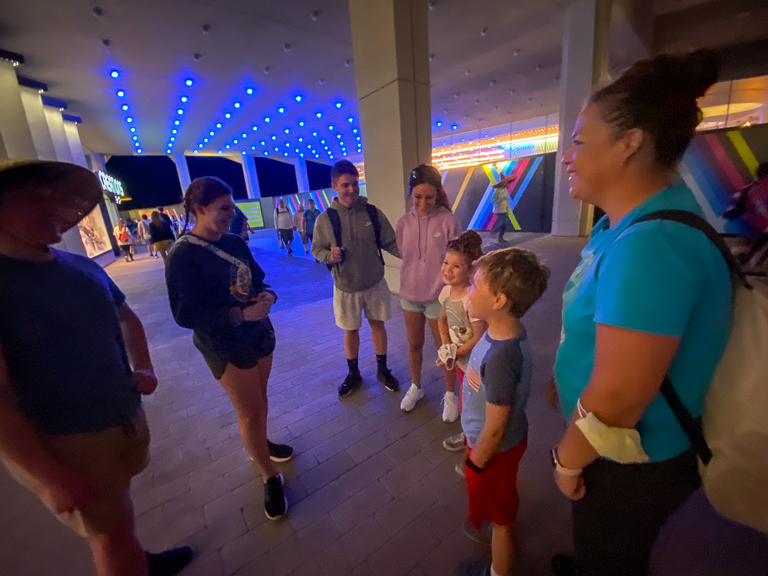 It's always fun to watch someone try Beverly for the first time. And the Sour Plum soda from China isn't much better. 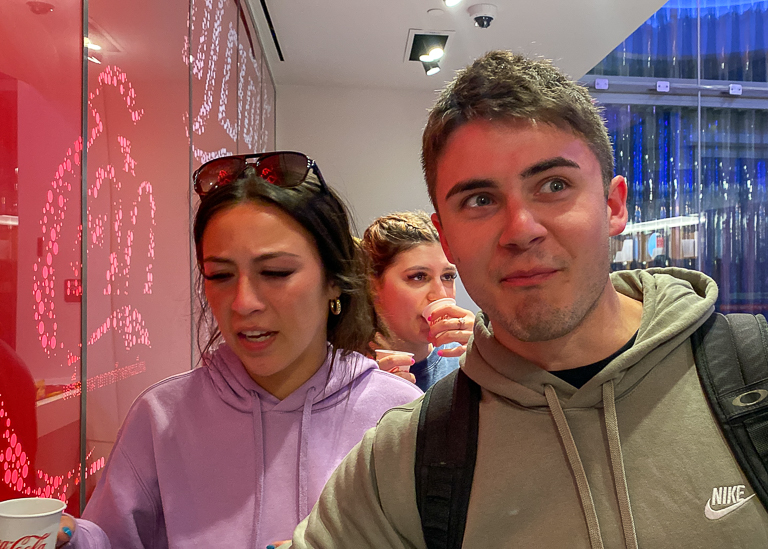 Which is worse? It's really hard to say. One tastes bitter and the other tastes like BBQ Sauce. Jared thought it was like Buffalo Wild Wings. Eww.
The cousins struck out a bit on their plan to eat around the world. The Flower & Garden Festival booths don't open until tomorrow, so they're stuck with the regular restaurants. Many of those take reservations, and their walk-up lists are usually full. At 8pm, they're about to call it a day and head outside the park to find dinner. 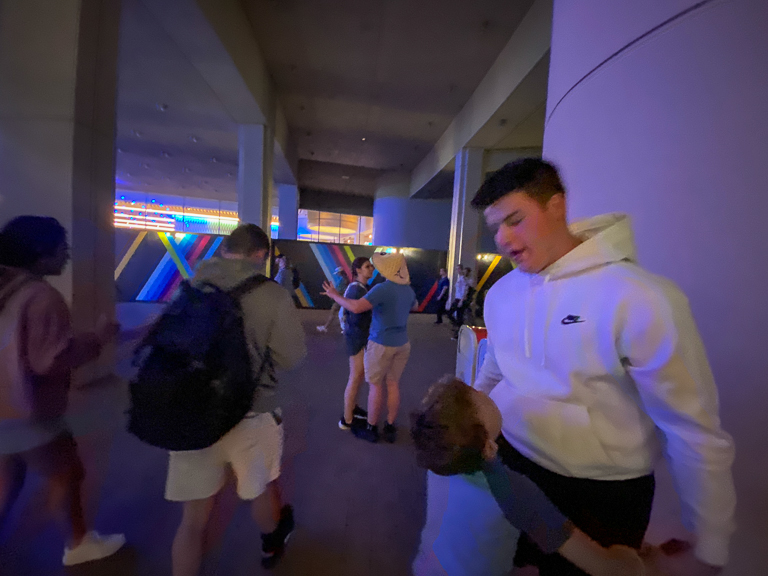 We however have other plans. T and I have been pounding the Genie+ app again to find one more ride tonight. Both of us saw a Frozen reservation open up for 8:30pm! One of us snagged it, and the other was disappointed, until learning it was the other that had been able to reserve it. It's 8:05 now, so we just have to kill some time before we ride. Saying hi to the troll. 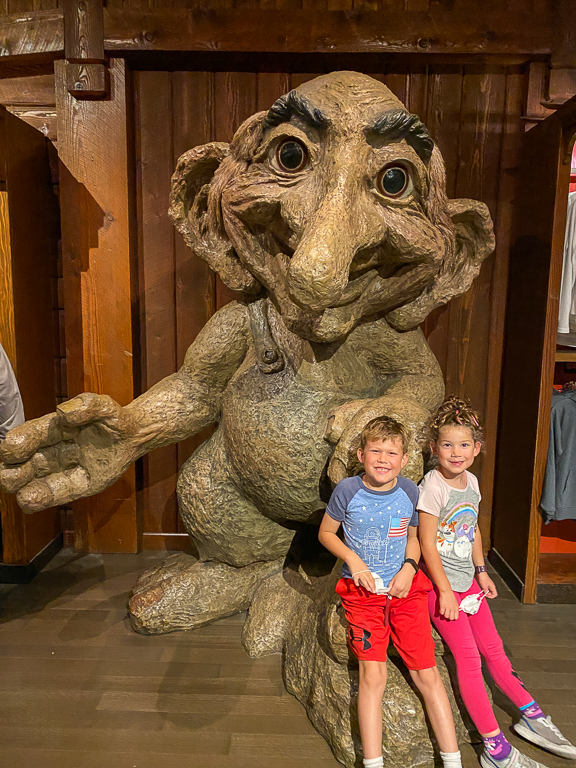 Alli really wants to dress up. She fell in love with this Elsa dress. 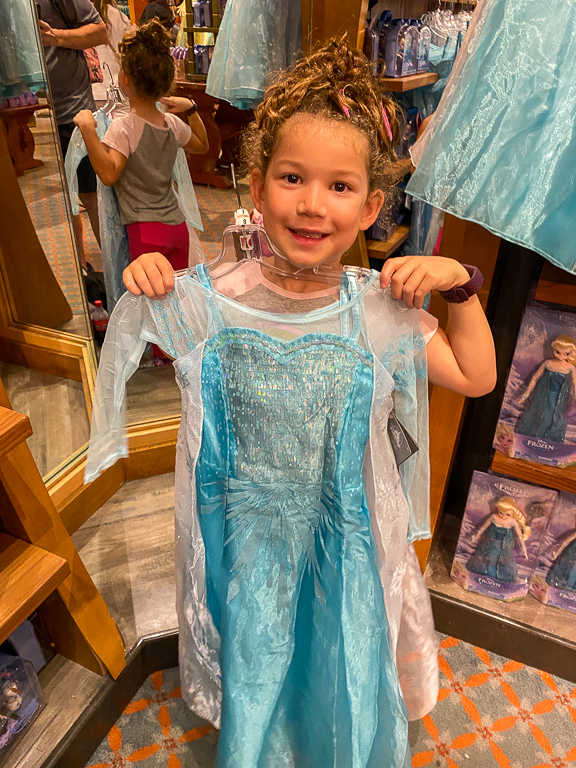 Fortunately with Genie+ reservations, they give you a little leeway in your return time. You can come back 5 minutes before and 15 minutes after your window. We zipped through the line and by 8:30 were actually on a boat! 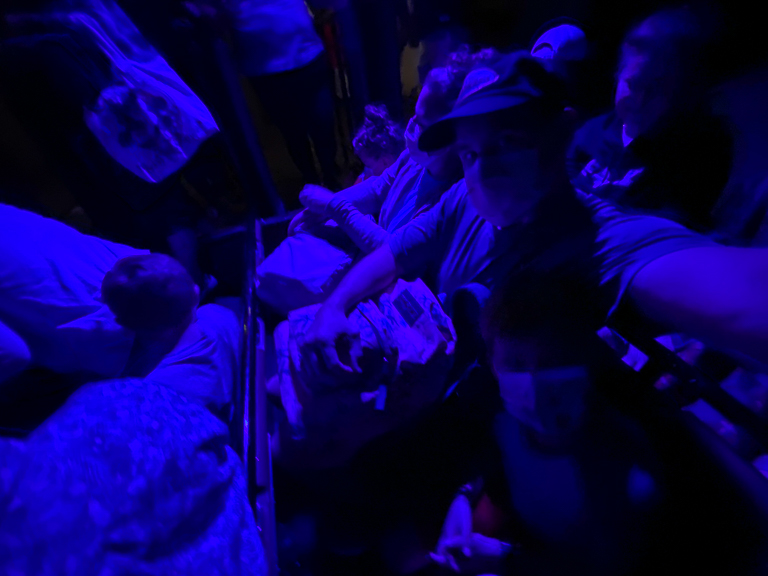 It's a fine ride, but it's no-one's favorite. Not even Alli's. We had thought to not even ride Frozen so we could make sure to get on the Remy ride right before the park closed. Luckily we finished Frozen with enough time to walk around the World Showcase and get in line for Ratatouille with a few minutes to spare. 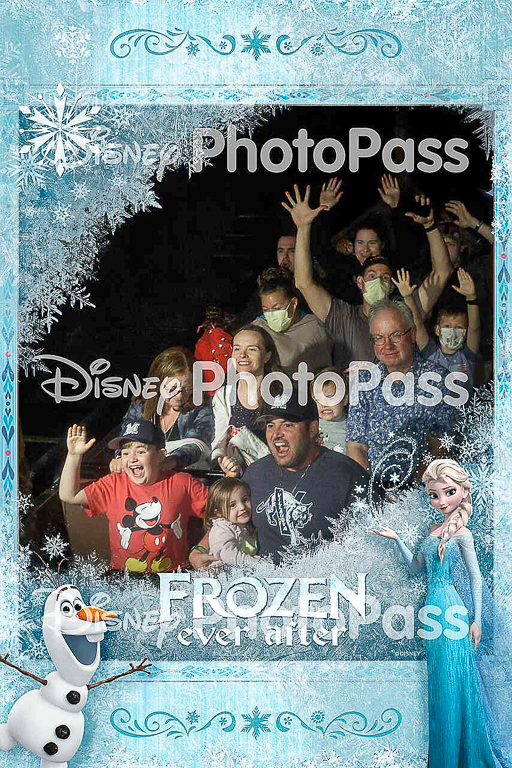 The wait time for Ratatouille drops dramatically as the night goes on. While it was 120 minutes earlier in the day, we shouldn't have to wait anywhere close to that. At 8:55pm, 5 minutes before the park closes, we were in line.
One other benefit of Genie+ I saw were these special photo "lenses" you could access. While we waited in line, everyone had fun seeing what different options were available. 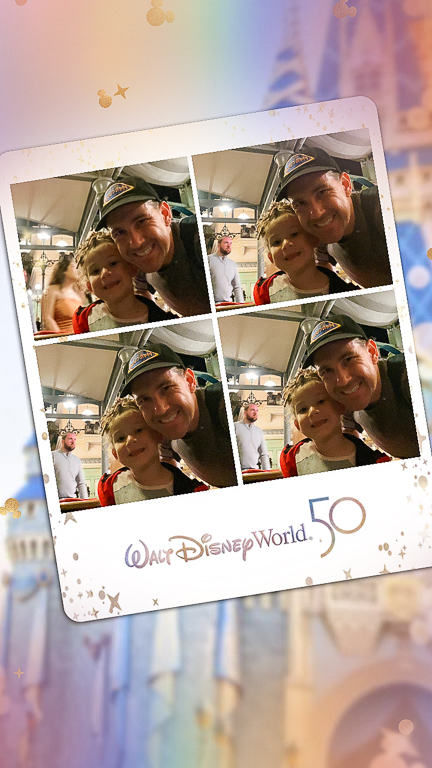 There's reflective glasses for all 4 parks. 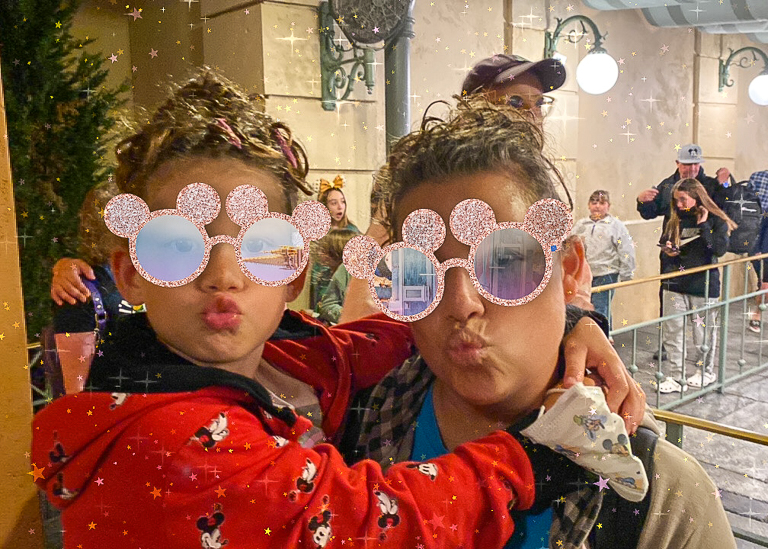 Looks like Ian is making ratatouille, and there's a little chef in his hat controlling him. 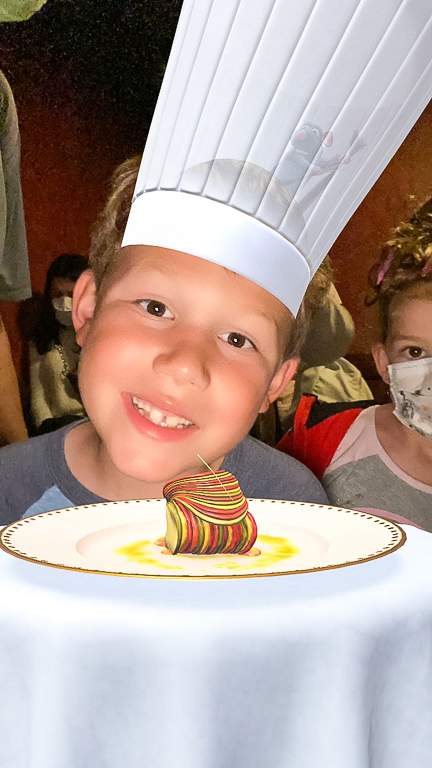 Enjoying a romantic Lady and the Tramp spaghetti dinner. 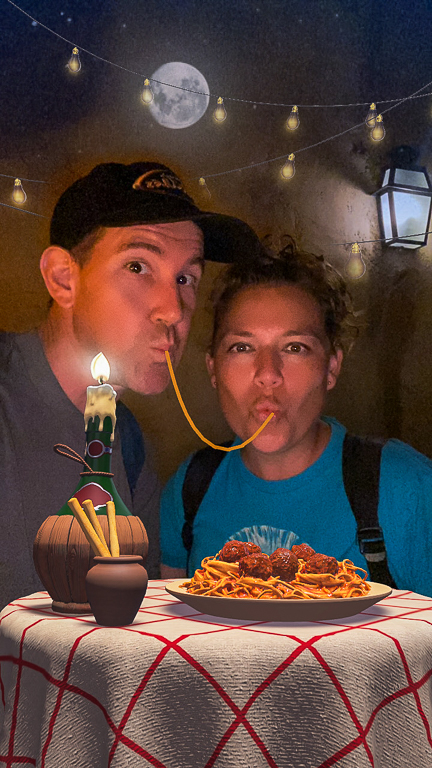 Mickey ears, balloons, and a bowtie! 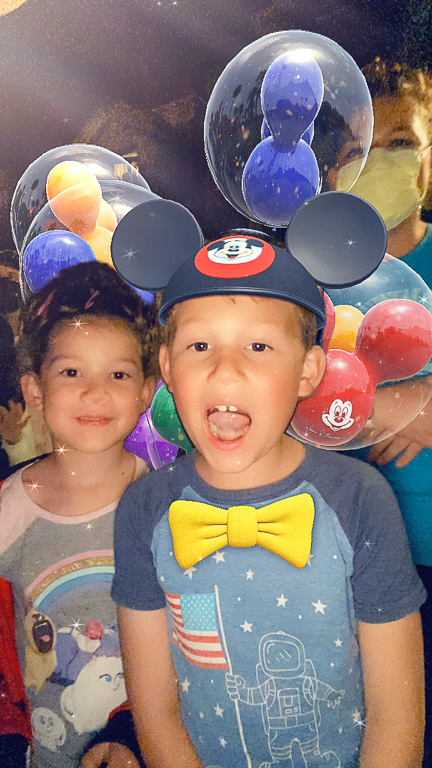 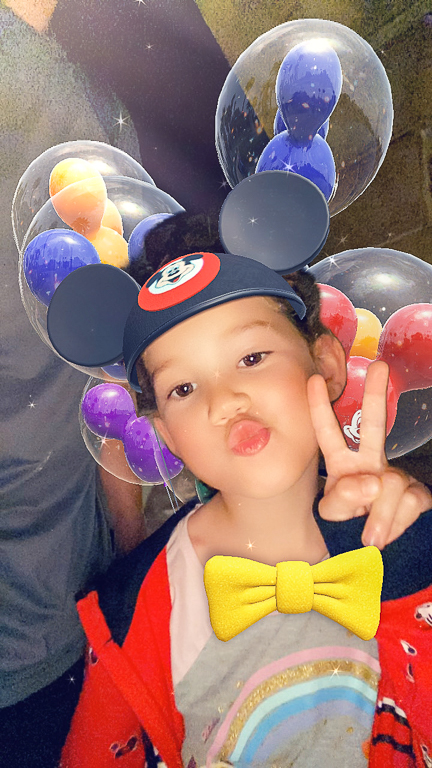 Mickey can come give you a hug. 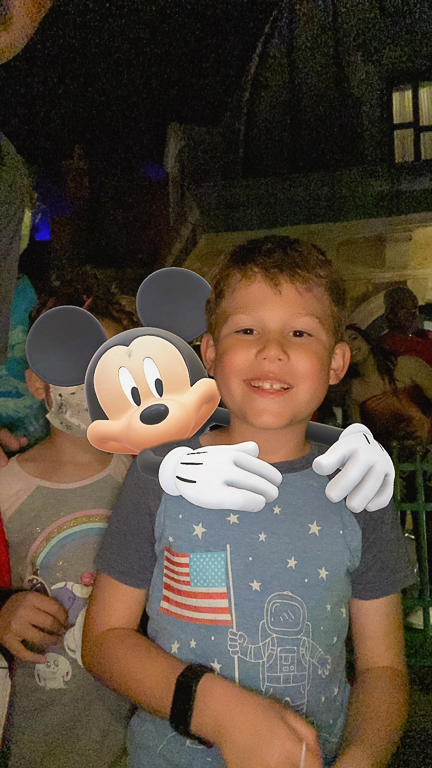 And Minnie can too. 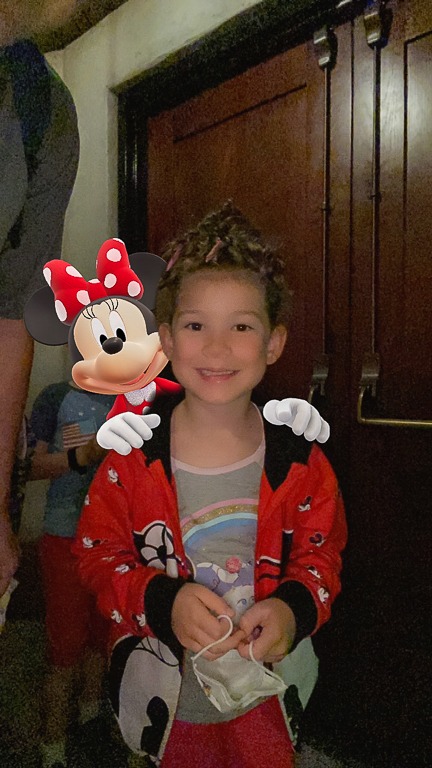 It can even turn you into a Genie! 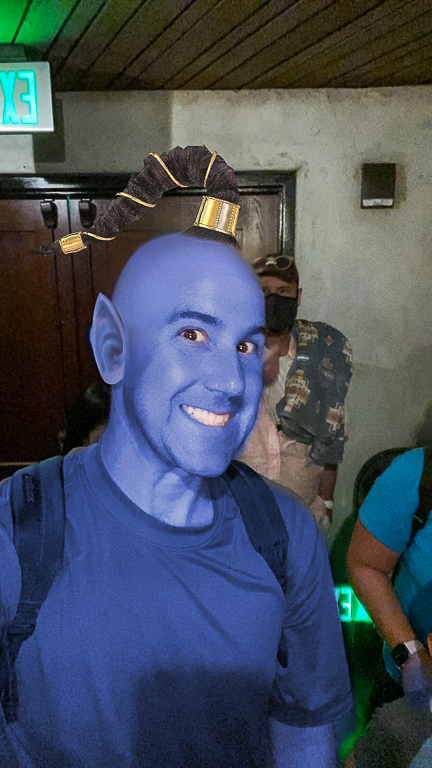 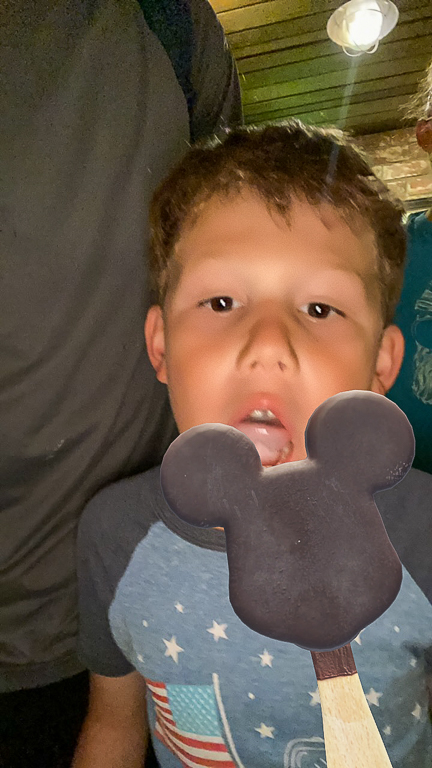 Or a Mickey pretzel. All the photos made our 15 minutes in line pass very quickly.
As far as Genie+ goes in general, it definitely helps you get on more rides during the day. It's frustrating to use, and it does take away from the experience of being in the parks. Theresa and I had to constantly be on our phones trying to get those last rides of the day. As a local, I wouldn't spend the money on it, since I can pick and choose when I want to go on rides a little easier. For someone coming for a few days, I can see how Genie+ would be a benefit to getting on a few more rides and spending less time in lines.
I liked the old Fastpass reservation system better where you could schedule rides ahead of time with more than a days notice. 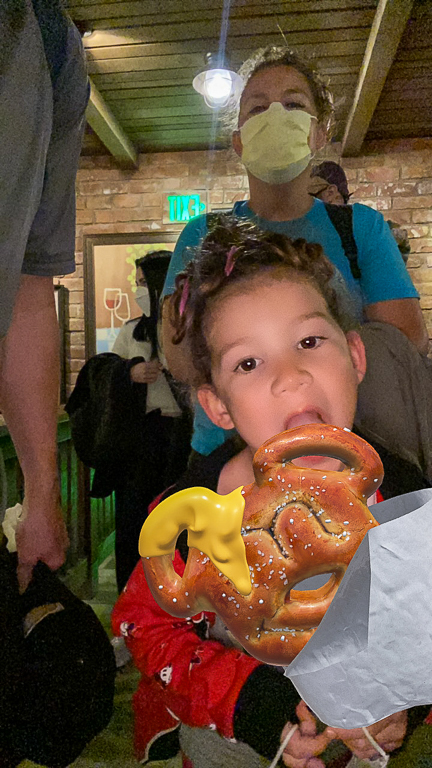 And after months of trying, finally we got a Remy colored ride vehicle! (Remy is actually a little gray and a little blue, so there's two different ride vehicles that "count")
Whew! It's been a long day! These kids opened the park at Hollywood Studios at 9am, and now they're closing down Epcot at 9pm! Our truck is still parked at Hollywood Studios though so we walked along the 1 mile trail to take us from Epcot over to the Hollywood Studios parking lot. When we got home, the kids were zonked! After a quick shower, they went to bed and passed out hard! 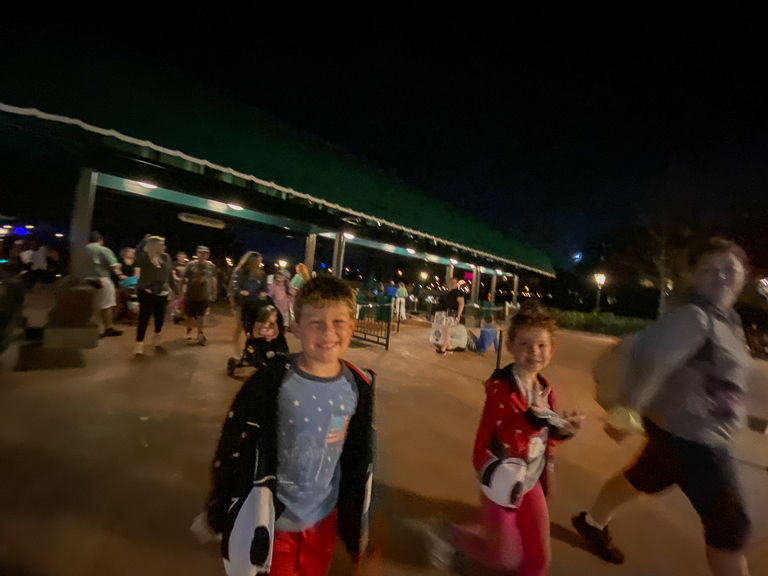