We have visitors, and any time we have visitors, I usually get the question "What are we going to have for a taste test?" We do do a lot of those, don't we. Well let me look up in my cabinet of goodies to see what I can find.

Cheetos! Nearly everyone likes Cheetos, right? Well what if I told you that Cheetos has just released their spiciest thing in the entire Frito-Lays lineup? Would you try it? I'm a big fan of spicy things, so yes, absolutely I would. 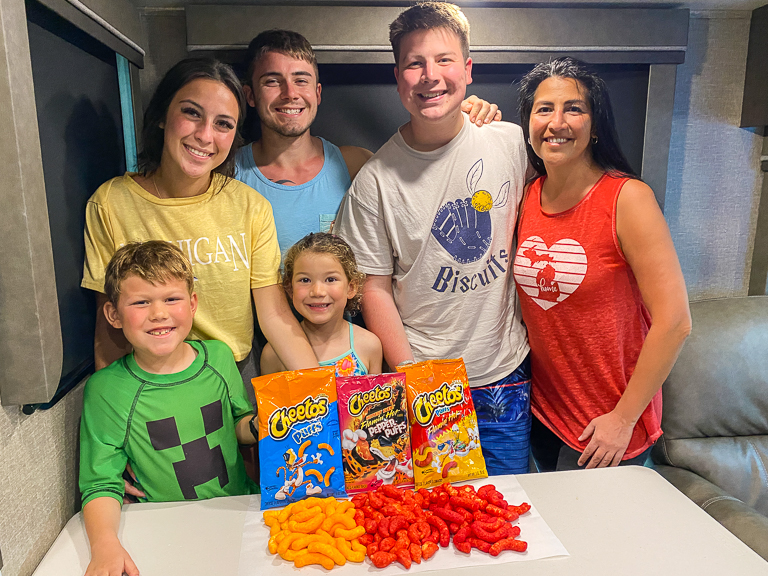 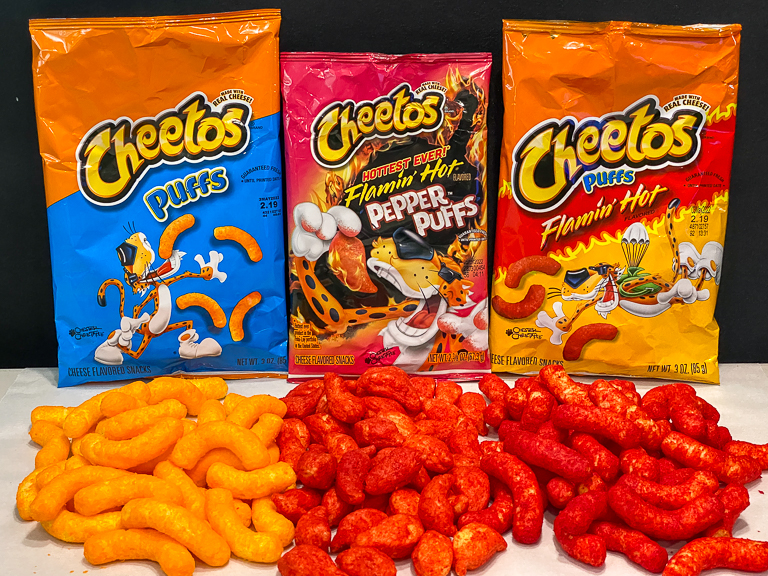 We are no strangers to Cheetos Taste Tests. Looking back, we've had Cheetos Popcorn, Flamin' Hot Cheetos Popcorn, Cheetos Snowflakes, three different kinds of Cheetos Mac & Cheese, and Cheetos Flavored Lays Chips.
Ian is hesitating, just like when we did the generic Flamin' Hot taste test. He's not a big fan of spicy foods.
Which one are you going to eat Ian?
Ian - Everything.
Theresa - Really?
Aubrey - Way to be brave!
Ian - I'm trying to be. I'm trying to not be a spice wimp. 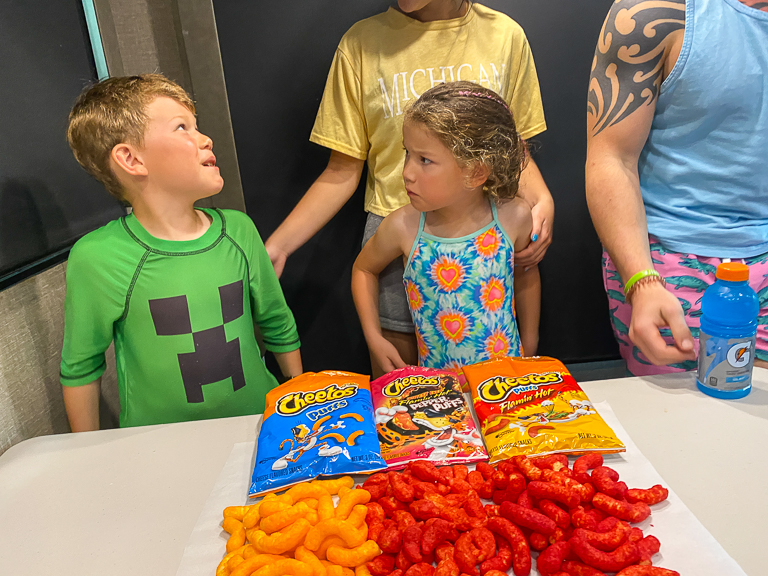 If I was going by the color alone, the standard Flamin' Hot Puffs have a much deeper red color than the Pepper Puffs. But looks can sometimes be deceiving. We'll see if these Puffs still pack a punch! 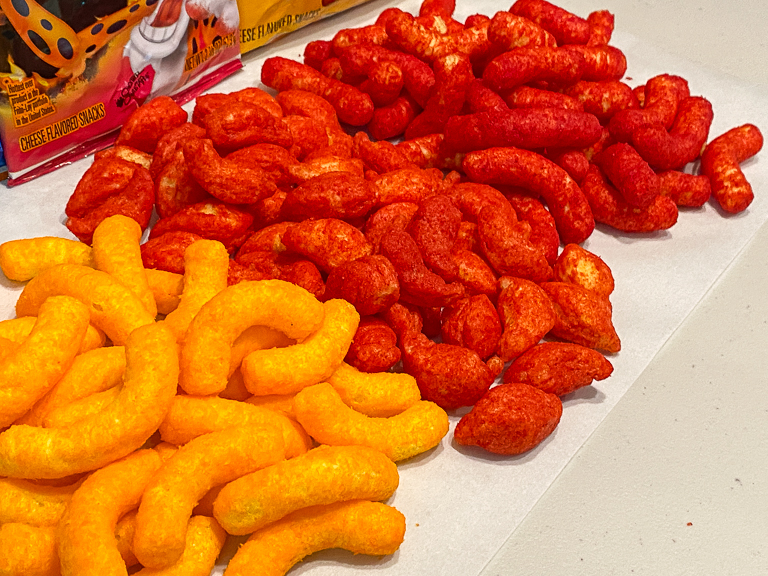 But before we jump to the heat, we're going to start with the regular cheese flavored Cheetos Puffs. Chester Cheetah is chowing down on Puffs that are huge! 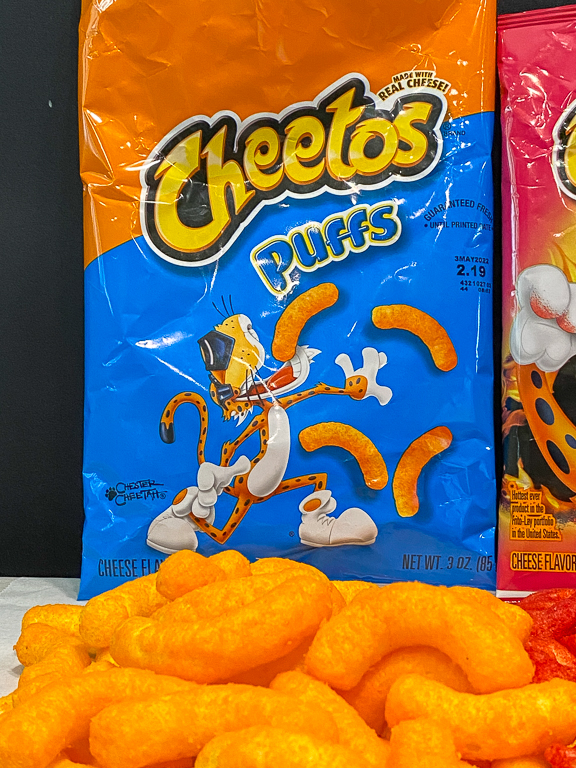 Smile everyone!
The standard puff is cheesy, with that Cheetos dust that gets all over your fingers. I used to dislike Cheetos, mainly for the texture, but I'm starting to come around.
Theresa - That's a good classic chip right there.
Aubrey - I like the Crunchy ones better than the Puffs. 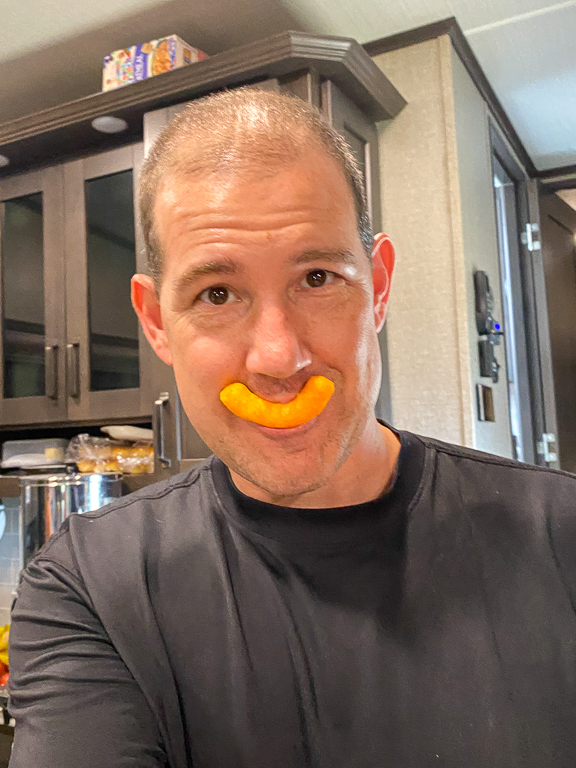 Next we'll try the Cheetos Flamin' Hot Puffs. For some reason, Chester Cheetah is skydiving with these Puffs. 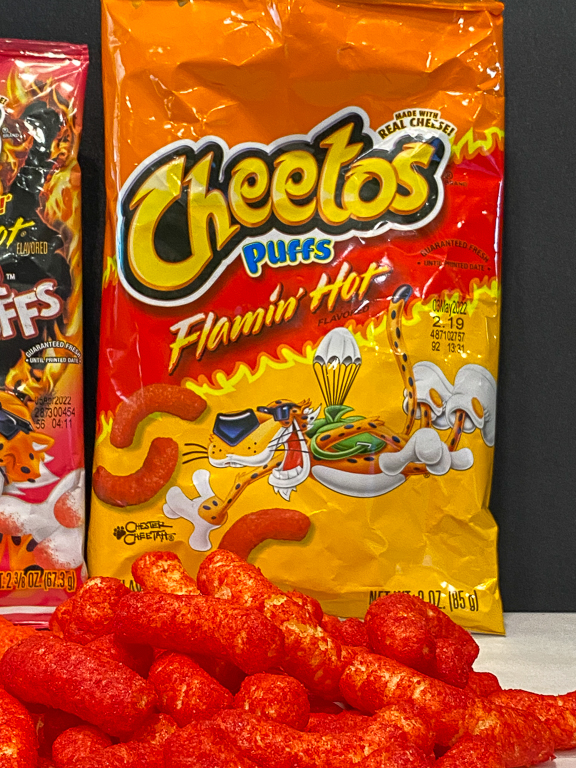 Alright, Ian is going for it. 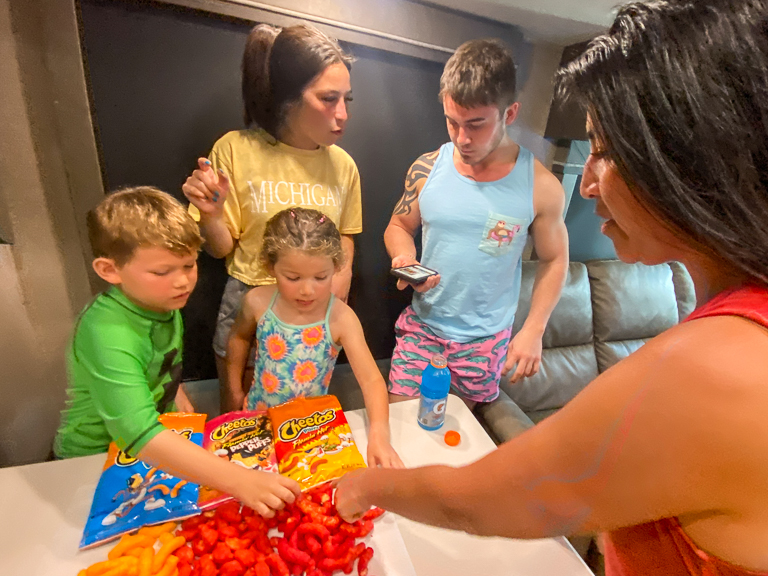 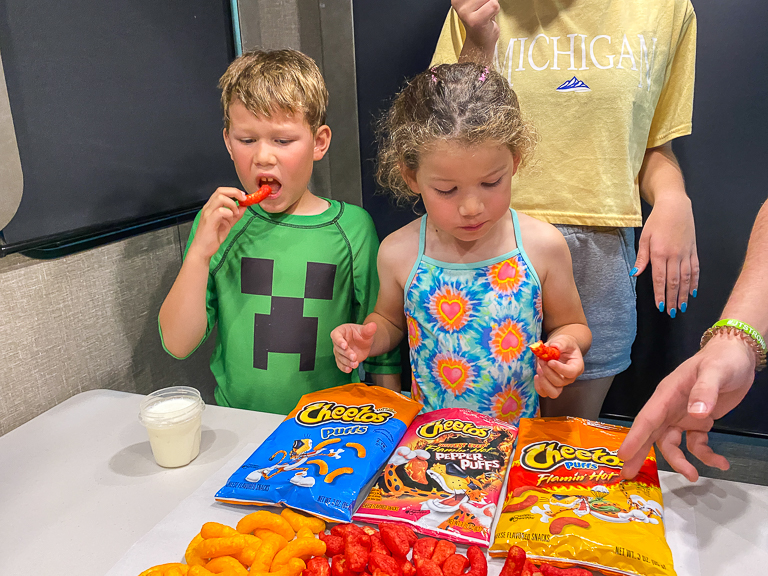 And... he's unfazed? The milk in front of him is untouched! He's becoming less of a spice wimp. Though he doesn't love it. 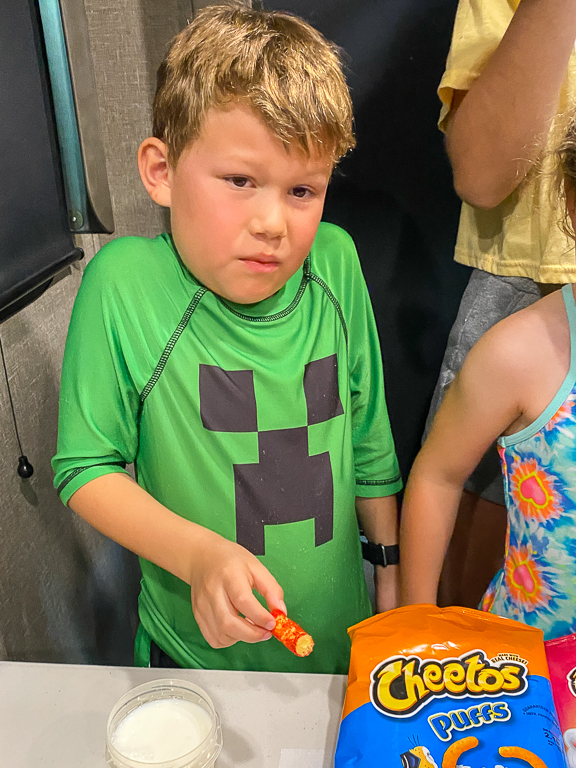 Which is great, because these Cheetos Flamin' Hot Puffs do have some heat to them. 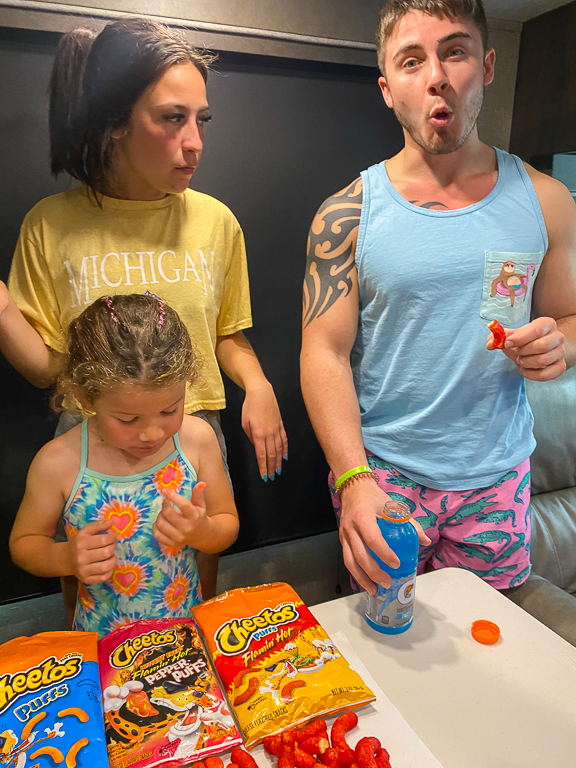 Finally we're going to taste the Hottest Ever* Flamin' Hot Pepper Puffs. On the front, Chester Cheetah is holding a Pepper Puff and there are flames coming off it! 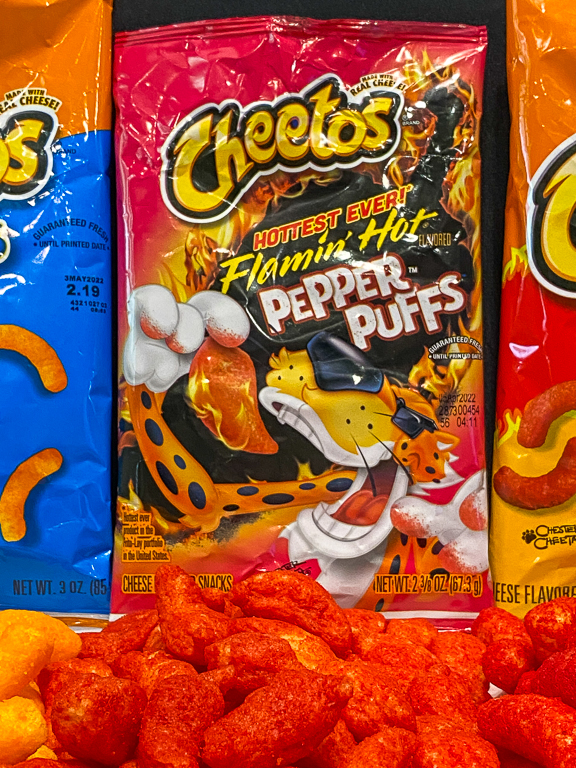 The flames have spread to the back of the bag too, causing a hole to be burned through this red bag of Puffs. 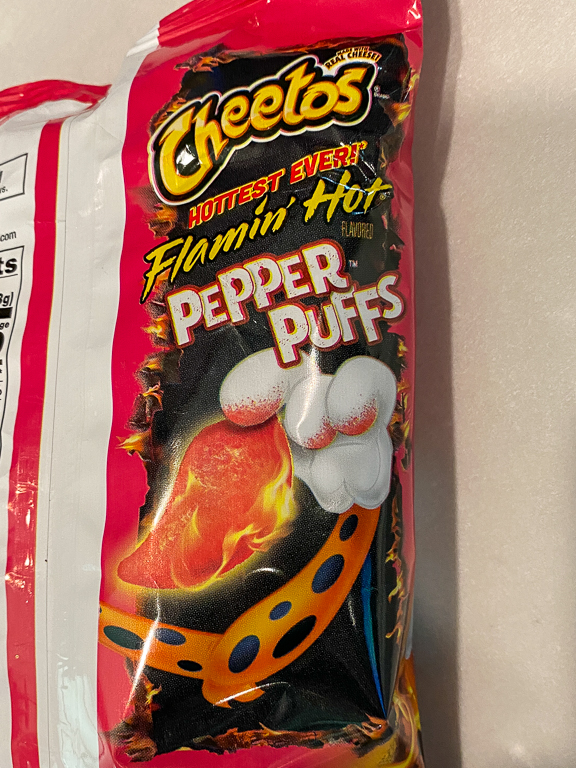 That "Hottest Ever" claim from above is clarified further. This is the hottest ever product in the Frito-Lay portfolio in the United States. Ooh, I wonder which country has a Frito-Lay product with even more heat? 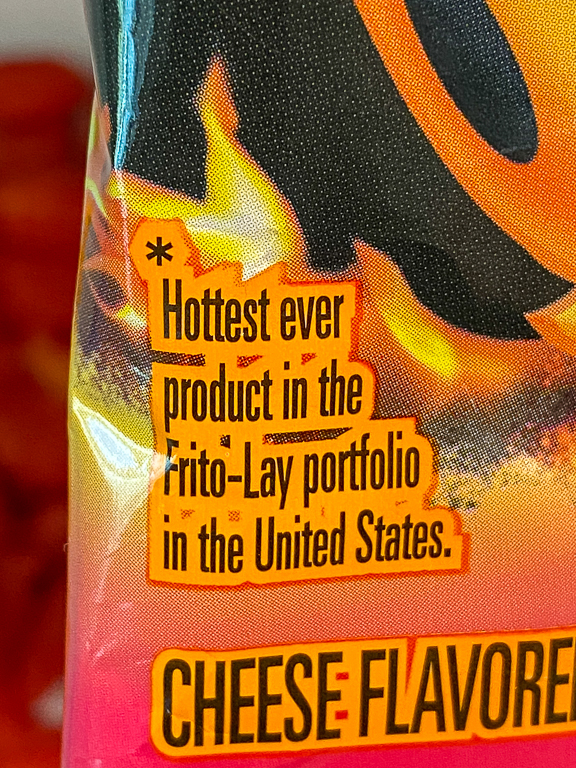 I like how on the package, they've replaced the center of some of the Ps with pepper shapes. 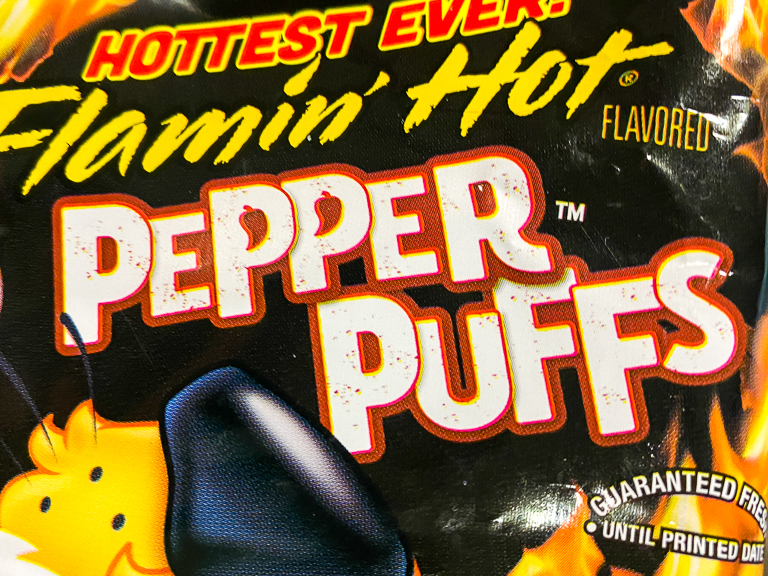 And speaking of pepper shapes, these Pepper Puffs actually are shaped like little peppers! Nicely done! 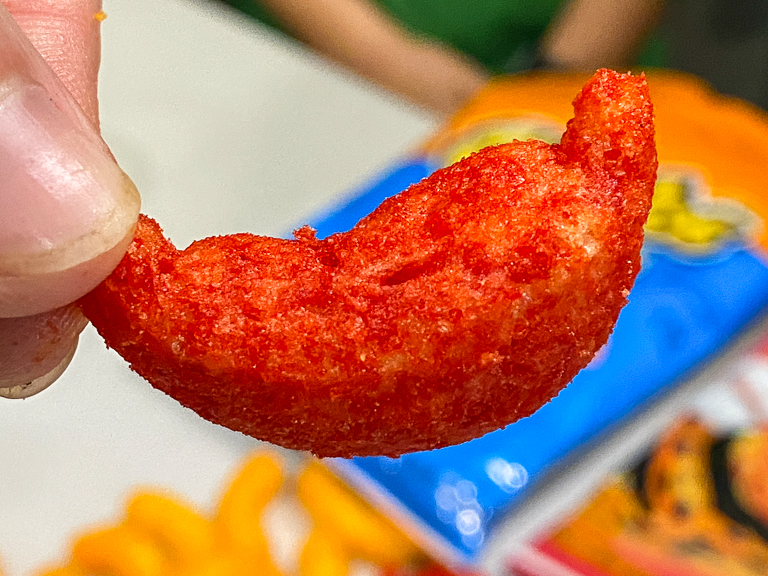 Alright, let's do this. Milk in hand and ready to try the Hottest Ever Cheetos Puffs.
Ian - I'm just going to try the tiniest nibble. 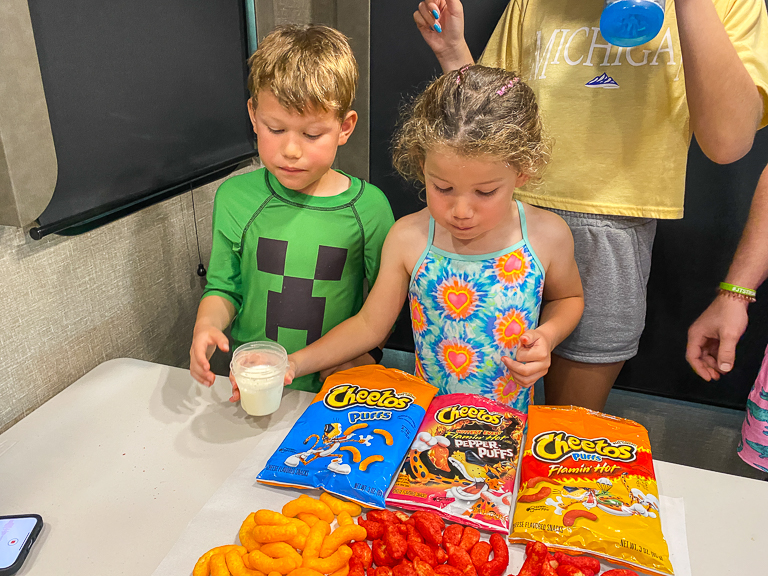 Huh. These Hottest Ever Pepper Puffs seem less spicy than the regular Flamin' Hot Puffs.
Theresa - It hasn't hit me at all yet. It's a residual hotness. It's not a hot flavor, it's a left behind flavor.
Rita - I don't care for the flavor.
They do have a little bit of a kick towards the end though when you start to swallow, but in my mouth, my tongue reacts to the Flamin' Hot Puffs more. Neither package gives any indication regarding the source of the heat. Both just claim to use Natural Flavorings. 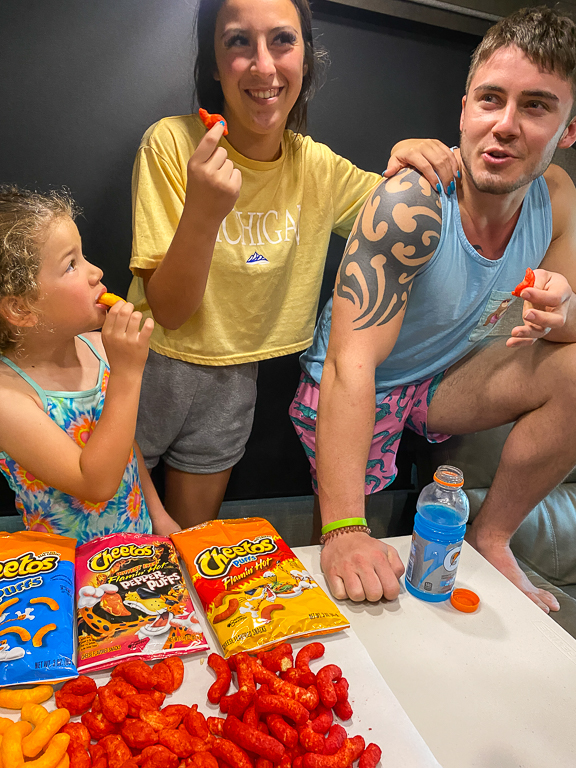 Ian - I completed it! I tried them all!
Alli - I like the regular, Flamin' Hot, then Pepper Puffs.
Theresa - I'm the same as Alli. Though if there were just Pepper Puffs, I would still eat them.
Jared - I wouldn't even pick the Pepper Puffs. I don't like those.
As far as favorites go, both kids enjoy the regular Cheetos Puffs best. 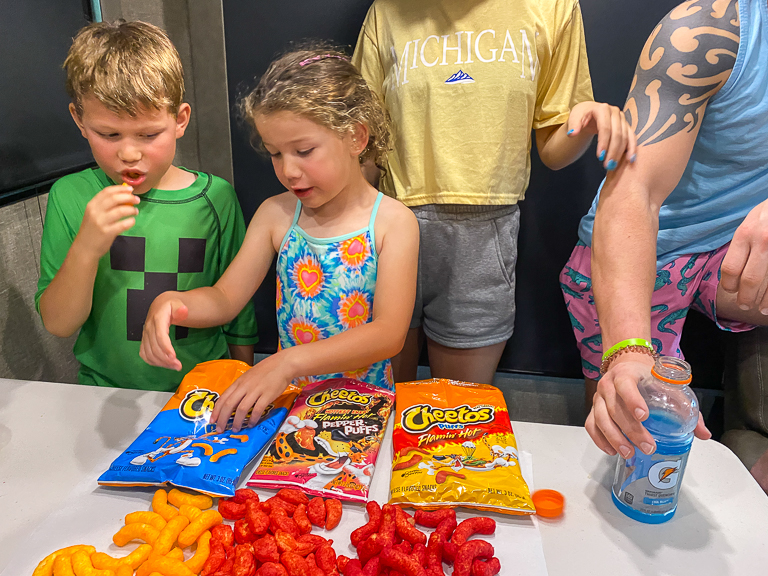