Today is National Caramel Popcorn Day! I have a great way that we can celebrate that! Let's make our own homemade caramel popcorn! One of my fellow MiceChat writers has a recipe for caramel popcorn that she says is better than the Karamell-Küche Werther's Original popcorn from the Germany pavilion in Epcot. We're going to test that! 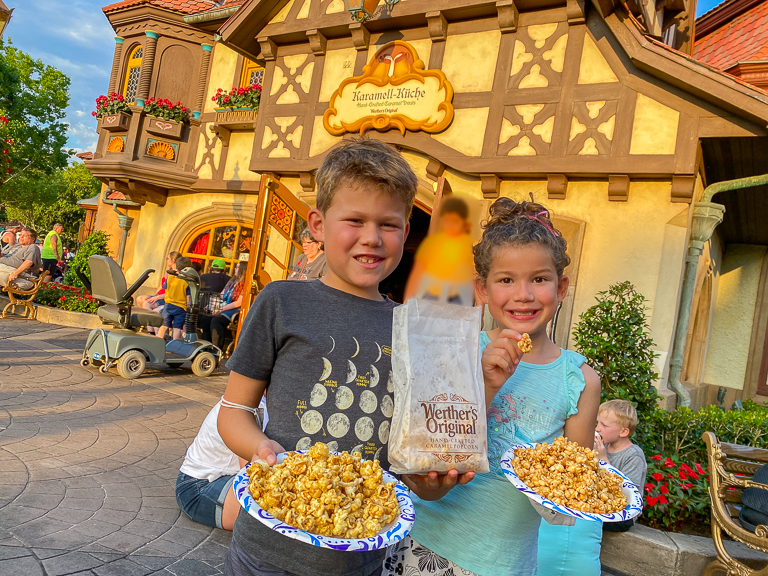 This recipe comes courtesy of Donna Collins, though it seems very similar to what I use for the Caramel Crack I made around Christmas. We're going to make this a part of the kids' school day today. I feel it's good to know your way around the kitchen, and they are always excited to help out. 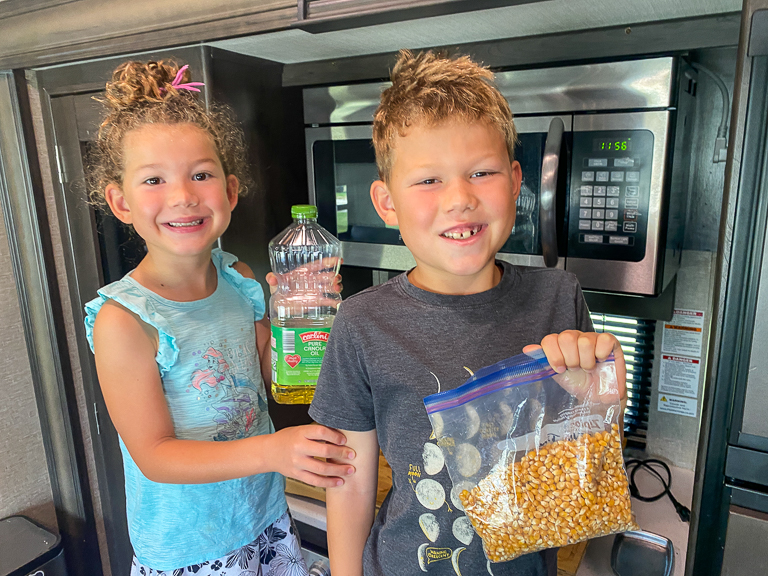 I don't have an air-popper, so we're making this the old fashioned way. Oil and popcorn kernels on the stovetop. What makes it work? Teamwork! Alli pours the oil while Ian holds the measuring spoon. 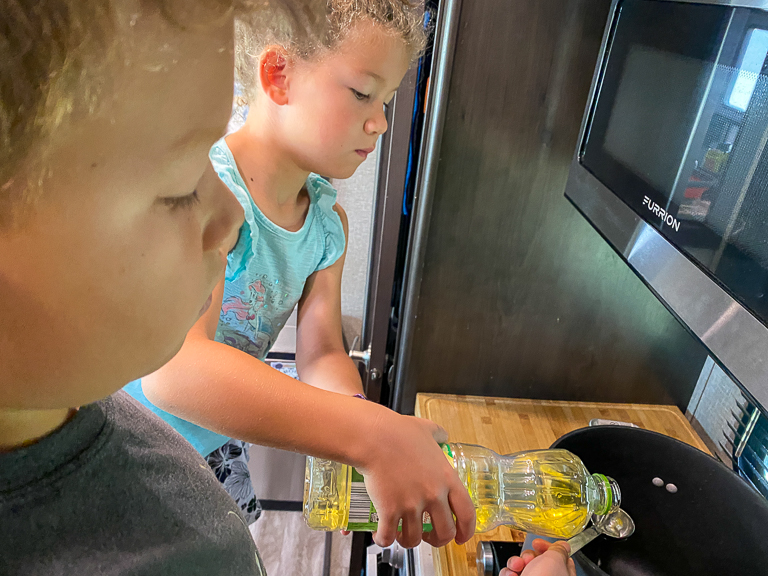 Then Ian adds a half cup of popcorn kernels once the oil gets shimmery. 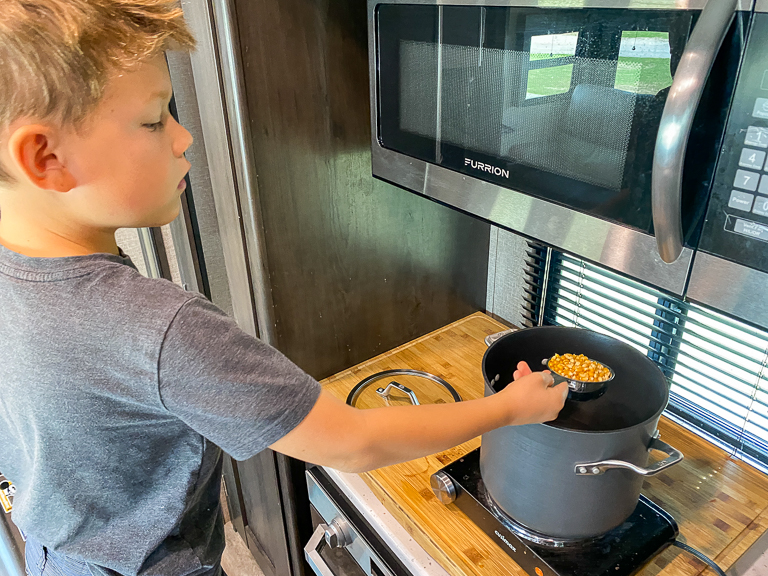 I kept the kernels moving in the oil. That'll keep the fluffy popped kernels on top, and all the unpopped kernels at the bottom near the heat. 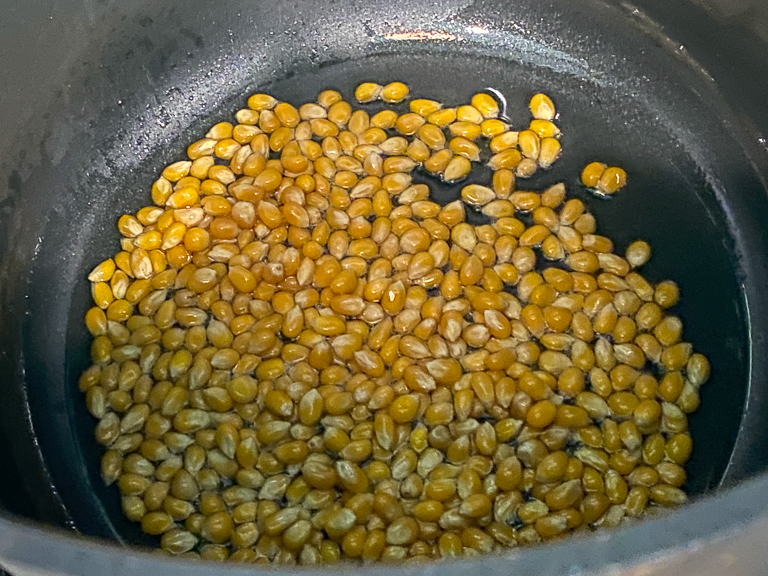 Ian had a little jump-scare as he was watching and the first kernel popped. I tried to get a video without the lid on, and the kernels kept exploding out of the pot! Ian was quick to claim them.
That's a lot of fresh popcorn. And no burned kernels like you might get in the microwave. 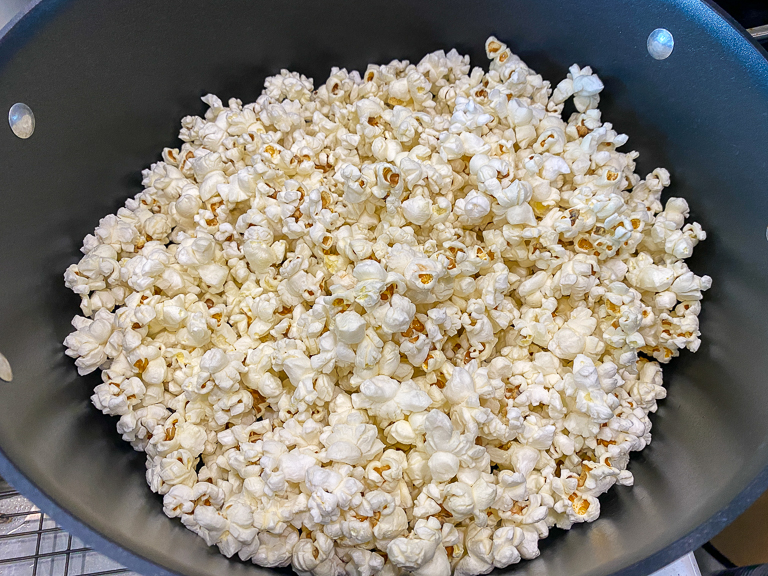 Time to make the caramel! It's a mixture of brown sugar, salt, butter, and corn syrup. And since we're trying to make this like Epcot, I think I'm going to add a little something extra. Just a teaspoon of vanilla to go along with it. 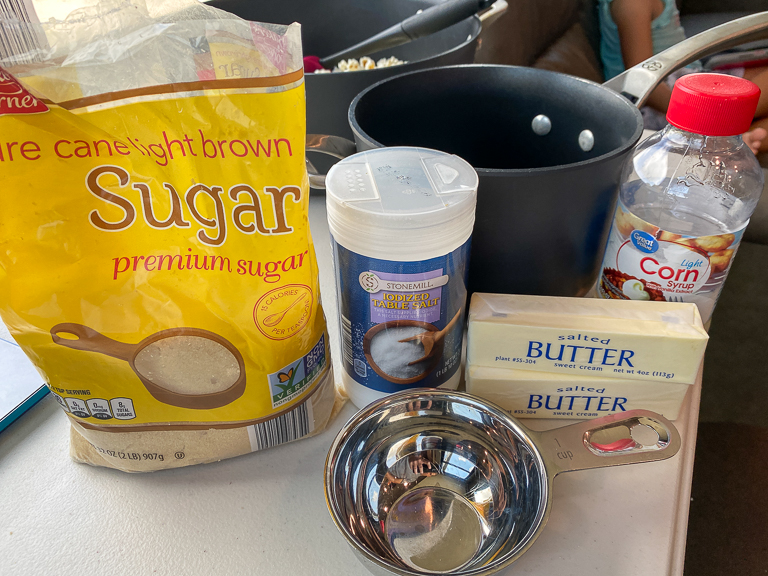 Thanks for helping out kids! For this recipe, all the ingredients get added to the pot at the same time. You cook it together and don't even stir it! 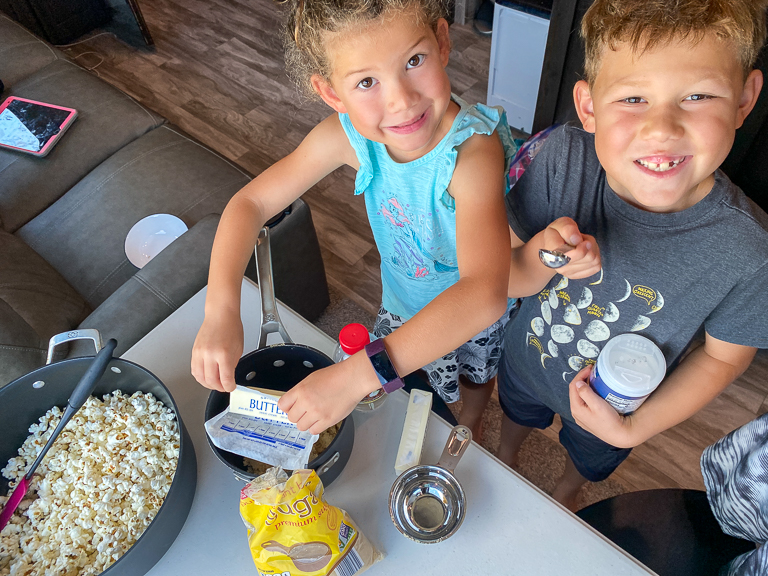 Teamwork again while they measure the salt. 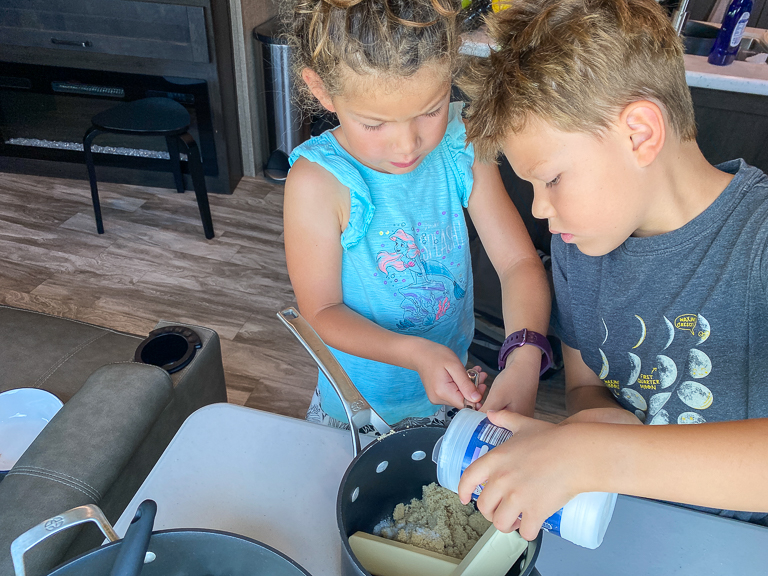 And something sticky like corn syrup is always easier to add by weight instead of a measuring cup. 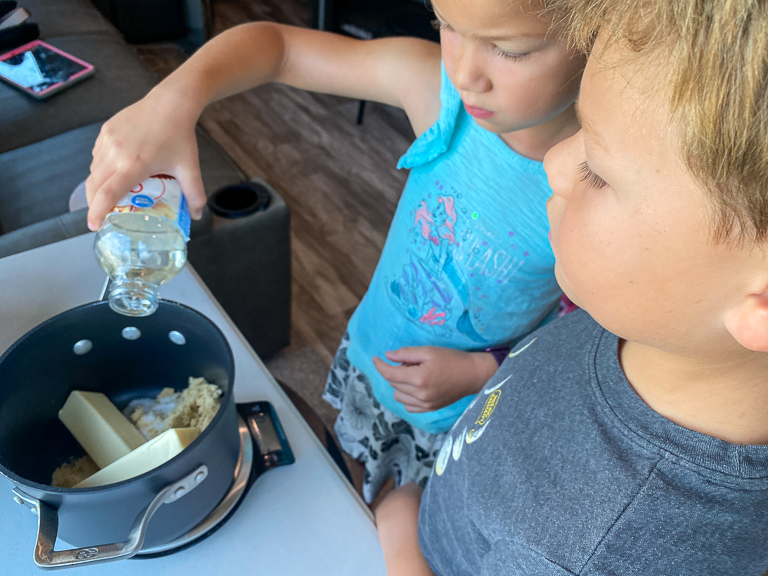 Everything goes into the pot and melts together. 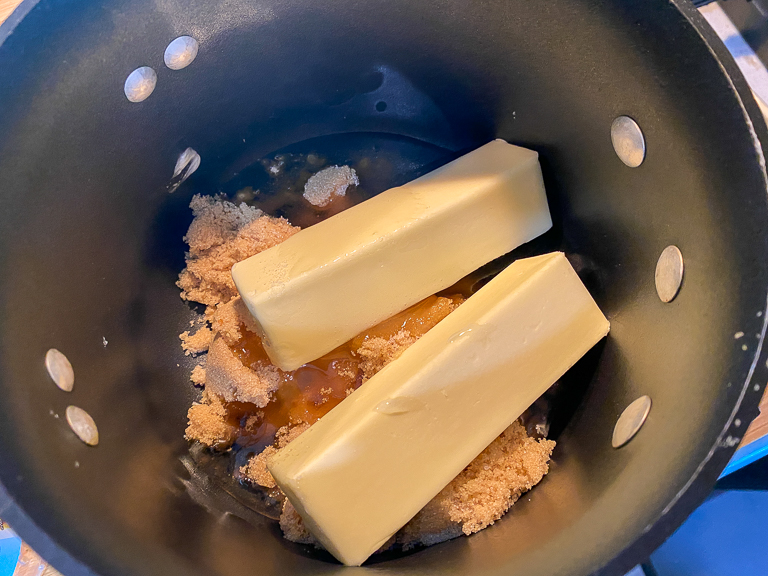 After everything melted down, it then comes up to a boil. 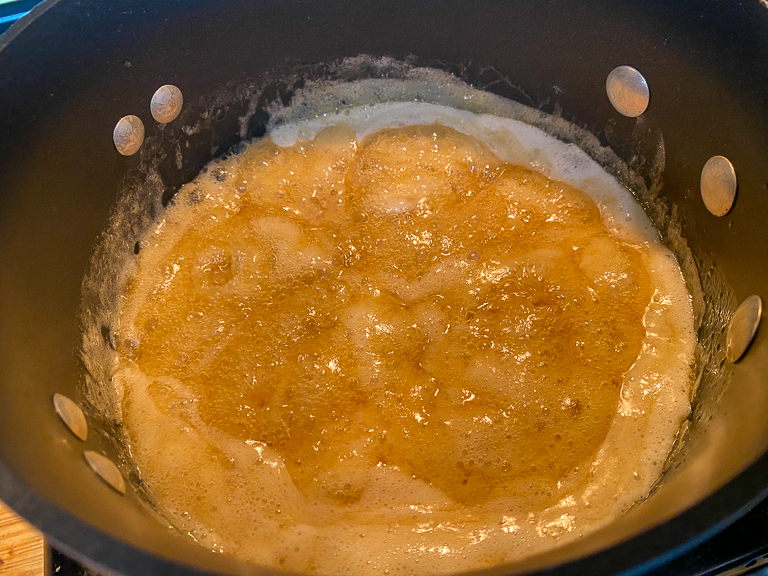 We kept a healthy distance away while we watched it boil for 4 minutes. 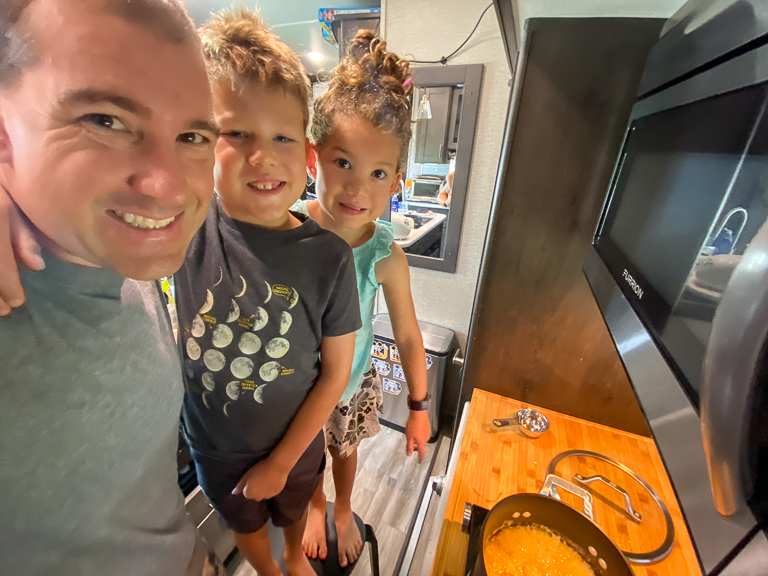 After removing it from the heat, and letting it cool for a minute, I added my teaspoon of vanilla. A quick stir and then it was time to pour it over the popcorn. 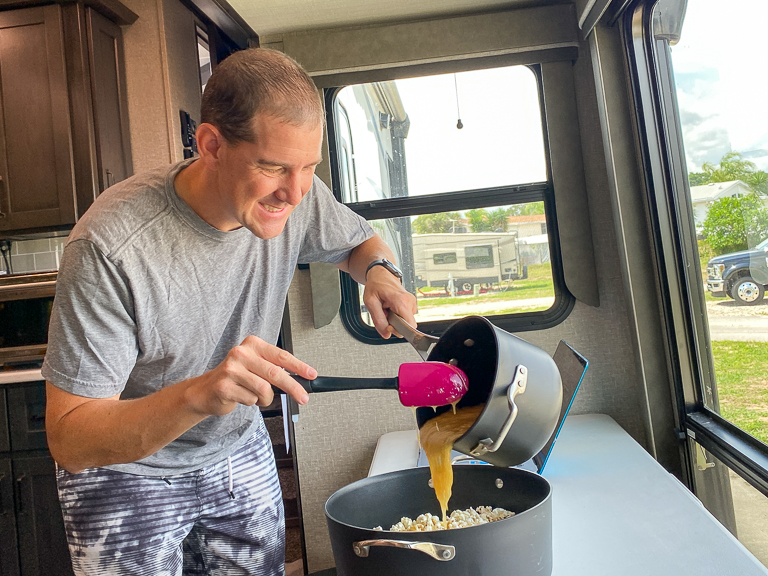 The kids helped me stir everything into the popcorn.
After a good mixing, the entire pot went into a 300F oven for 30 minutes. I stirred it every 10 minutes to keep things evenly coated. 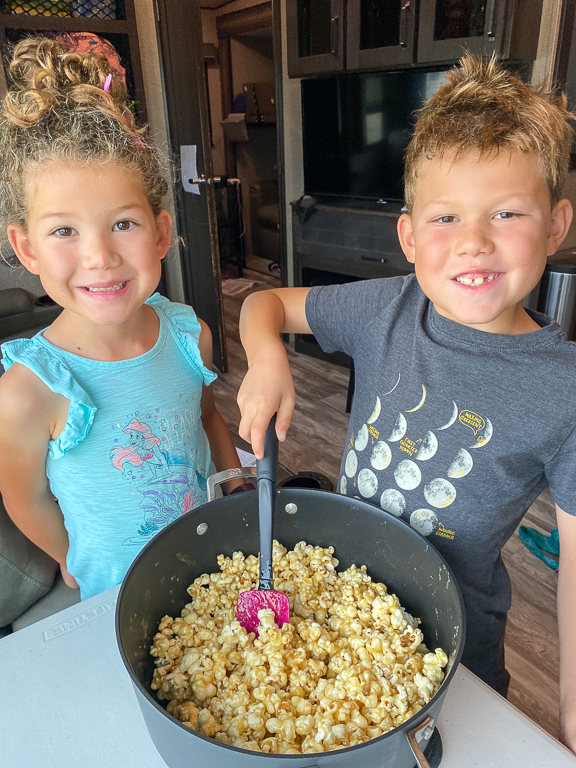 I learned from making Caramel Crack that it's better to spread everything out with lots of room to cool. 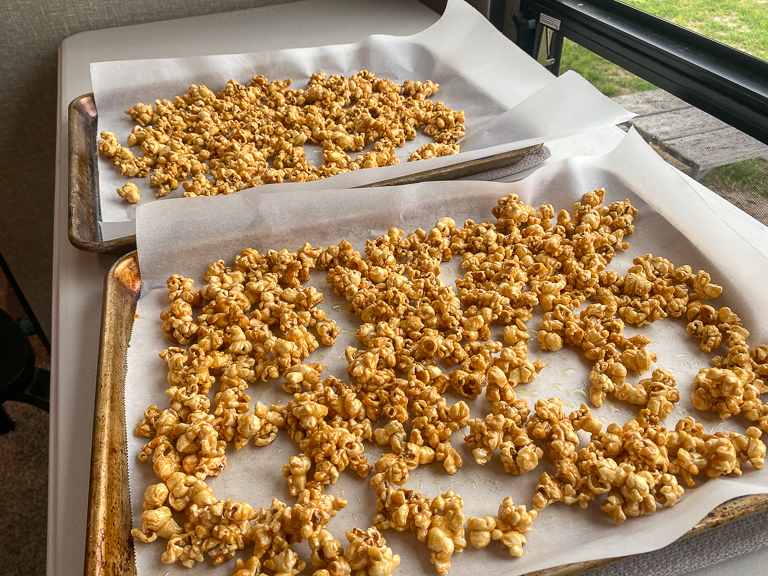 I caught this rascal trying to sneak a piece once it had cooled off. 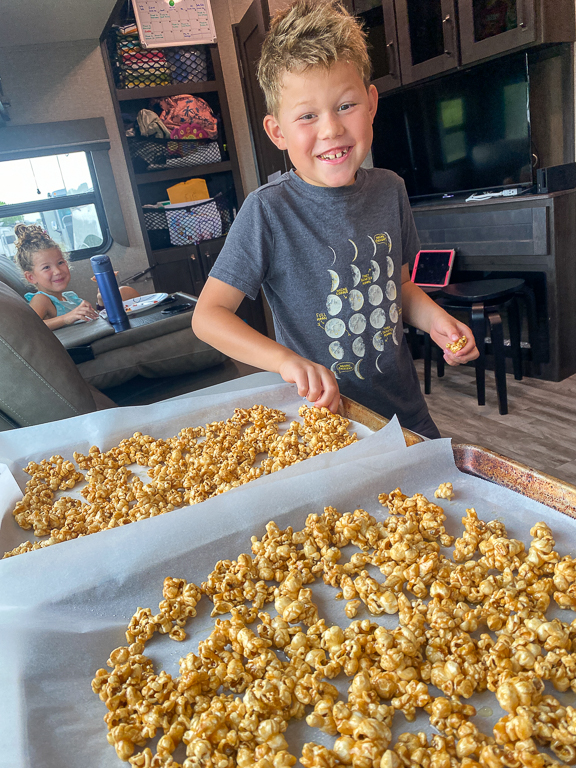 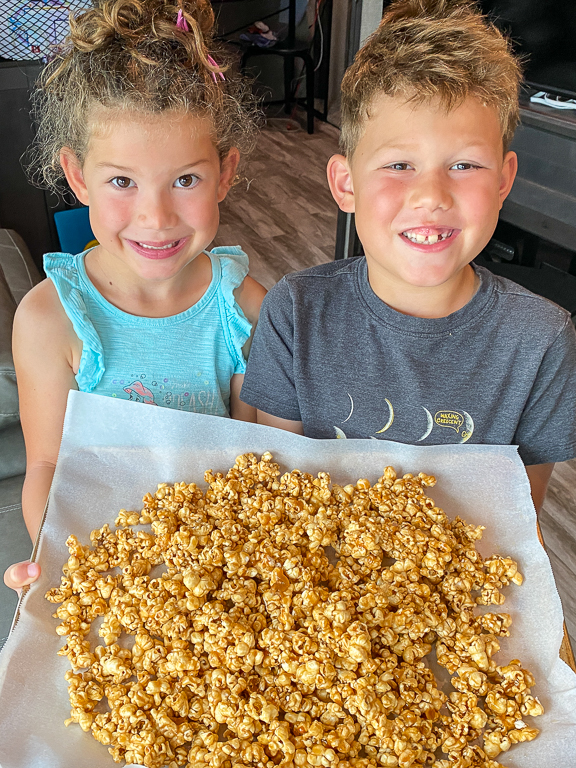 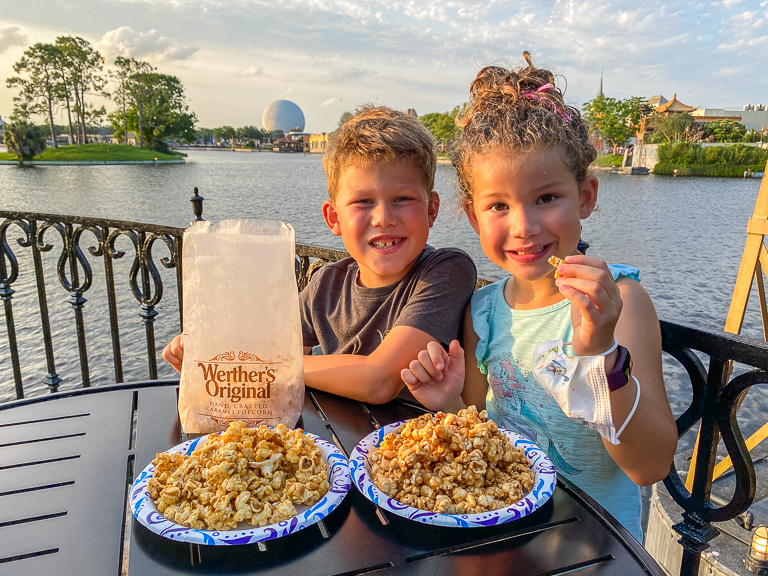 Since we've got both of them together, that gives us a great chance to compare the two of them and really find the differences.
The Karamell-Küche popcorn is not quite as sweet. It also has a lighter caramel flavor than our homemade version. Ours has an extra bit of saltiness to it too. Ours also has a rich buttery taste. If we're going to compare flavor, our homemade caramel corn has a stronger caramel flavor, more buttery taste, and saltier hit at the end.
Taking a vote amongst the four of us, there were three votes for the homemade caramel popcorn, with one vote for the Karamell-Küche popcorn. Theresa liked the more subtle caramel taste. She said it's almost like a Kettlecorn taste, due to the light sweetness.
Today was a fun one! Some time in the kitchen with the kids and then a trip to Epcot for some popcorn! 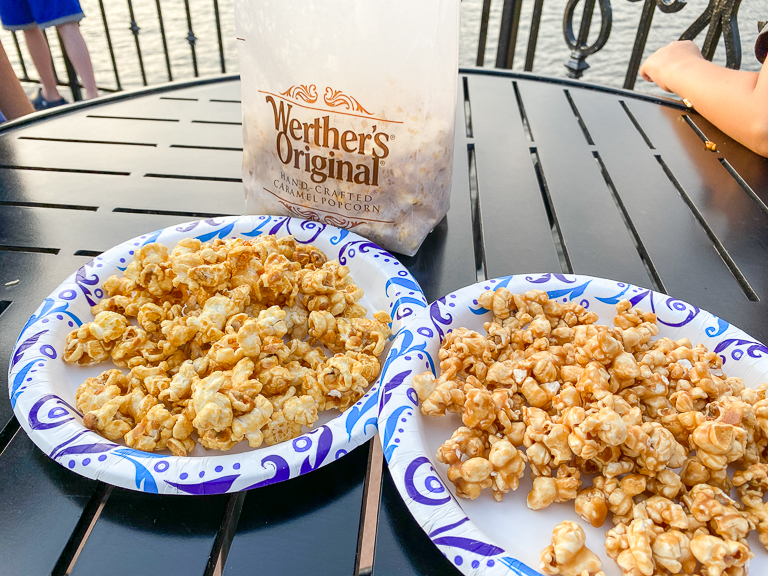