Who loves cotton candy?
Actually it turns out that cotton candy isn't for everybody. I put out the call for a Holiday cotton candy taste test and get very few takers. That's okay. Alli, Amy, and I all love cotton candy. 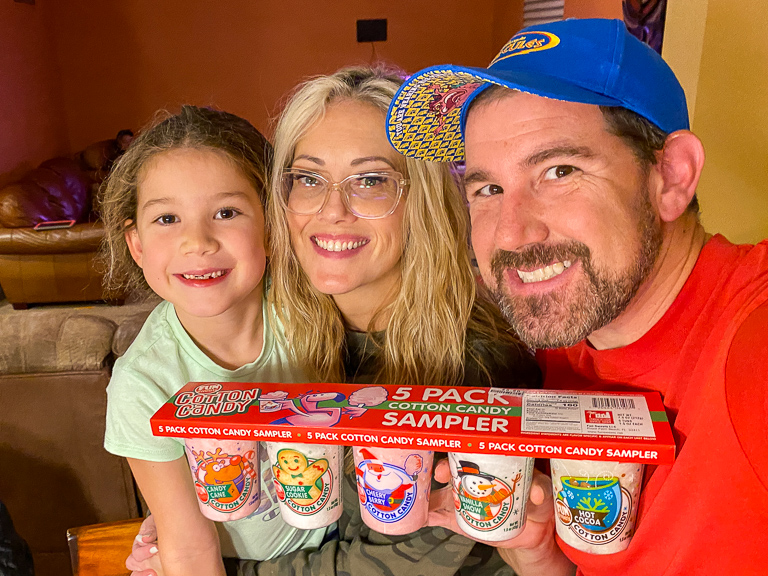 Theresa was shopping and happy to show me what she found, but definitely didn't want to participate. There's 5 fun holiday flavors in this Cotton Candy Sampler from the Fun Sweets candy company. Candy Cane, Sugar Cookie, Cheery Berry, Vanilla Snow, and Hot Cocoa!

We found this pack at Big Lots for $5.50, but since then I've also seen then at Walmart for $5.00 in the Holiday section.

Good for about a year! Nice. 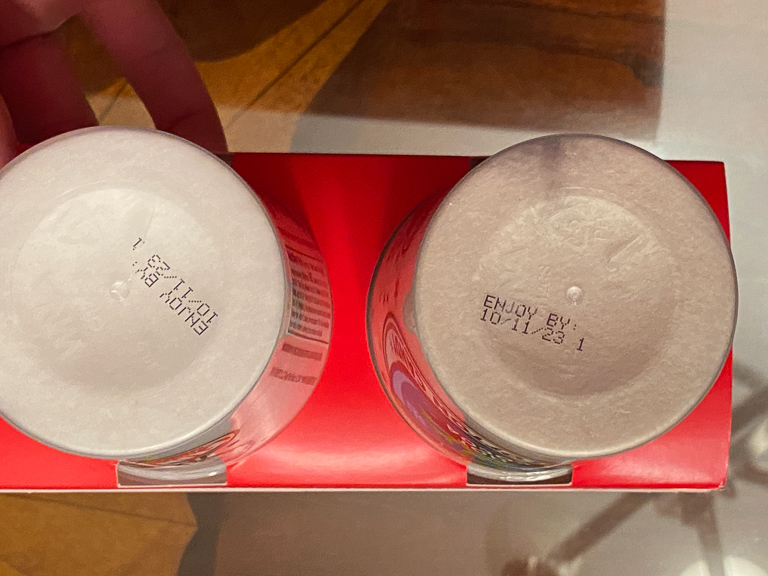 Before we dig in, we discussed which flavors we thought would be good and which we wouldn't like.
I think the Candy Cane cotton candy has the potential to be great. I'm worried about the Hot Cocoa one. There's just something about artificial chocolate flavor. I just do not like it. They usually taste like Tootsie Rolls. 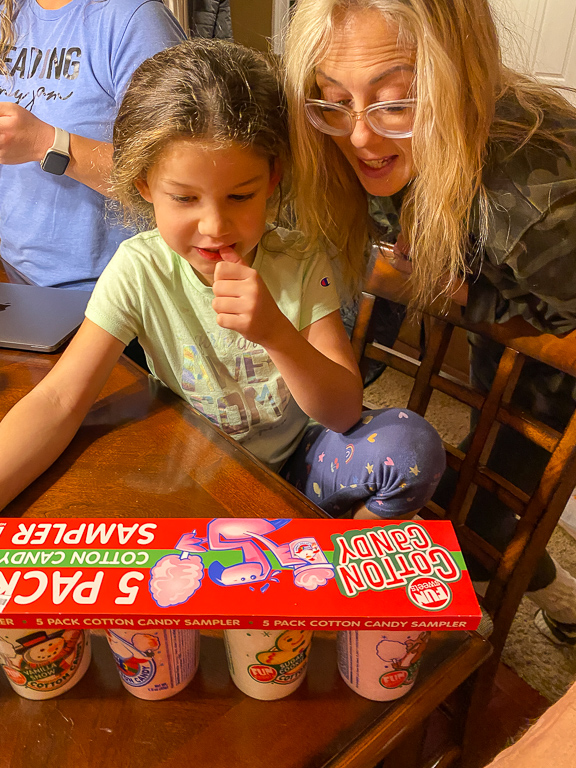 Getting a picture of the cotton candy in each tub. Any time I try to do a picture like this, one of the kids trying to work their way into my picture. I could have cropped her out, but she's going to get a kick out of seeing this later. 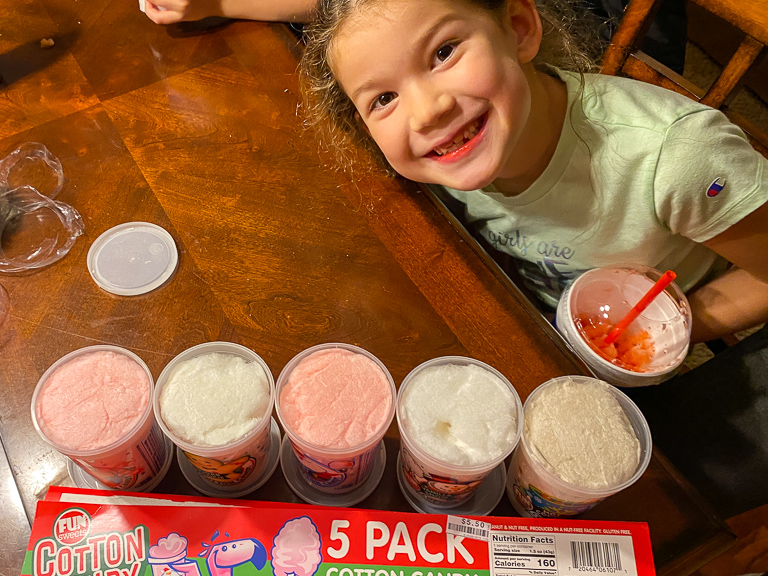 What order should we taste these in? From left to right based on the box looks good to me!
First up, Candy Cane! I like that each of the tubs has a fun character or drawing on it. This one has Rudolph holding a candy cane! 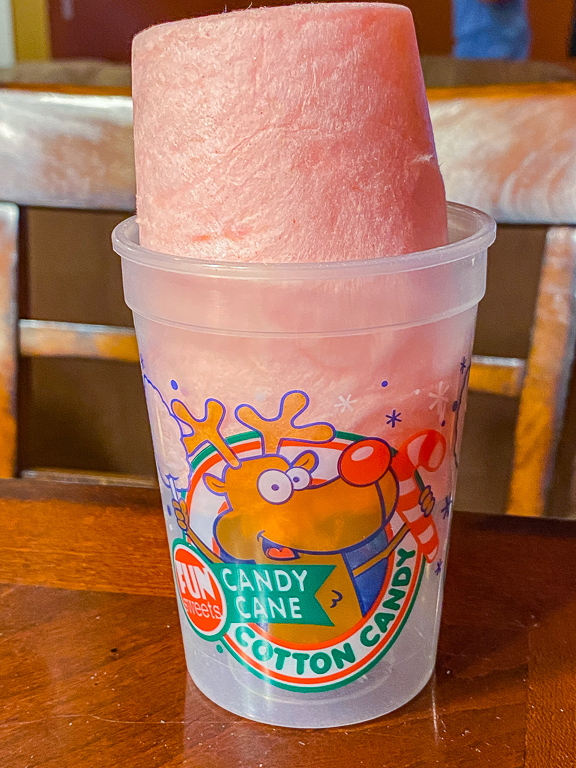 Amy - Candy Cane smells good. It's not strong. It mostly smells like cotton candy.
Take a pinch! Except Ian took a gob!
Amy - It has a slight peppermint flair. I could eat that whole thing.
Alli - It's a good peppermint. 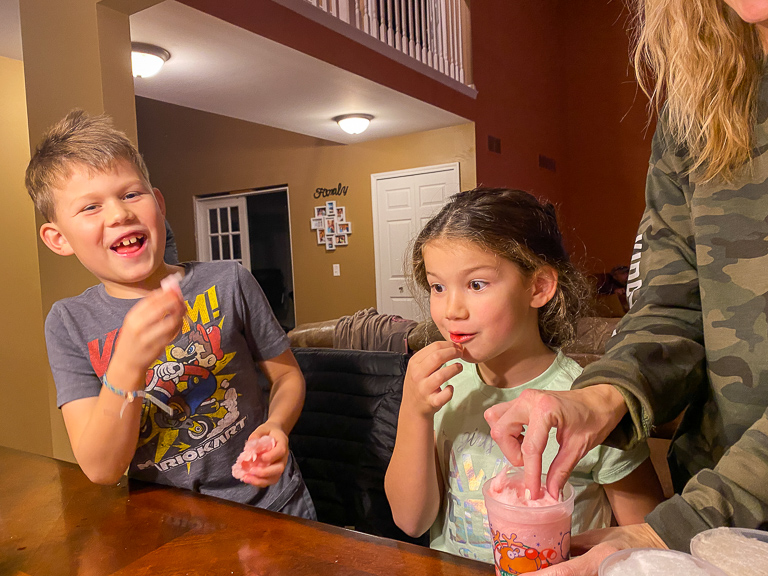 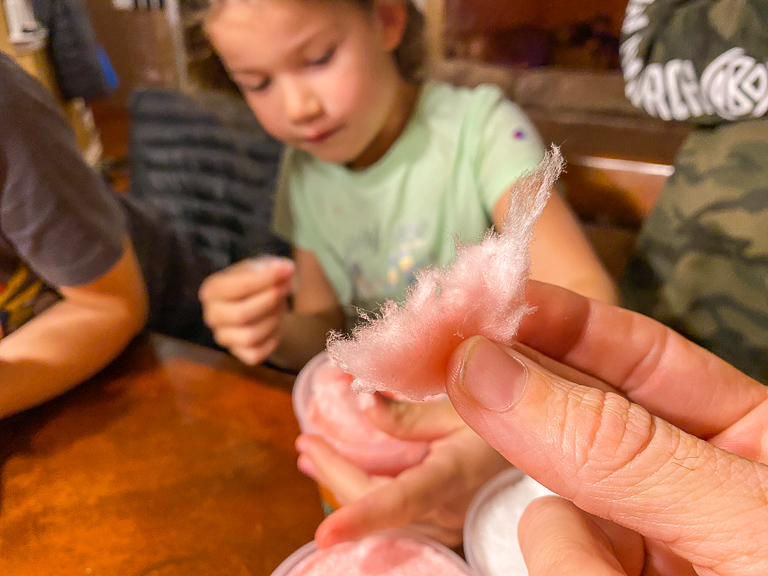 Next up is the Sugar Cookie! That looks an awful lot like a gingerbread man on the front, but let's not quibble. 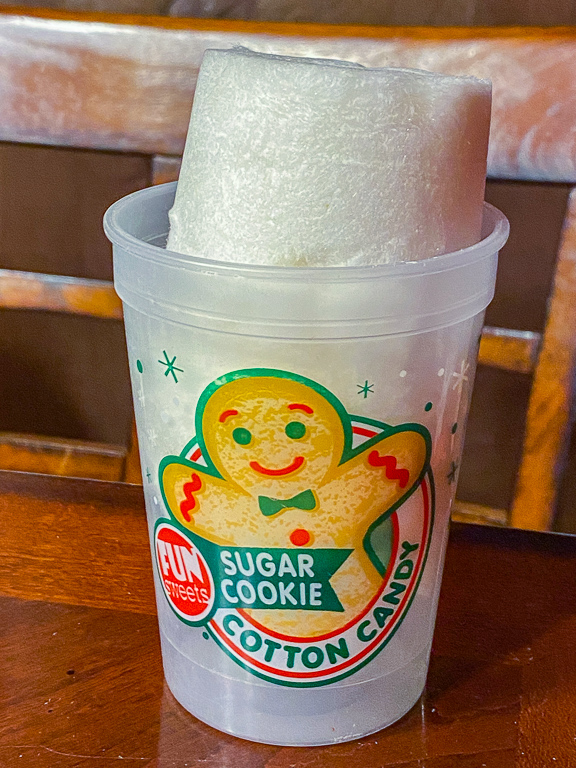 Amy - I think this smells better than it's going to taste!
Alli - Mmm! That's good!
Amy - It tastes like sugar cookies!
Joe - Yeah, like that baked cupcakey flavor. Like Funfetti flavor.
Amy - That's good!
Joe - That's surprising! I had low expectations.
Amy - So far I would eat both of those. 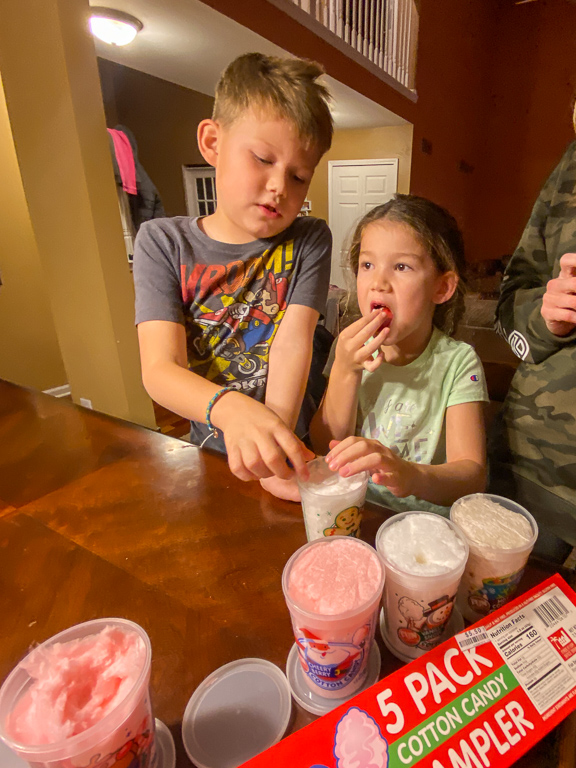 Next is Cherry Berry.
Ian - <reading the label> This is Cheery Berry.
For days I thought this was Cherry Berry and thought it was the least "holiday like" flavor of the bunch. I was reading off the flavors and got corrected that this is Cheery Berry, not Cherry.
Santa is full of cheer, so he's perfect to put on this one. And he's holding a big fluffy cone of cotton candy.
Alli - What is that? That's yuckiness!
Amy - It actually tastes like strawberry.
Ian - That was not good.
Amy - It's my least favorite so far... but I'd eat it though! 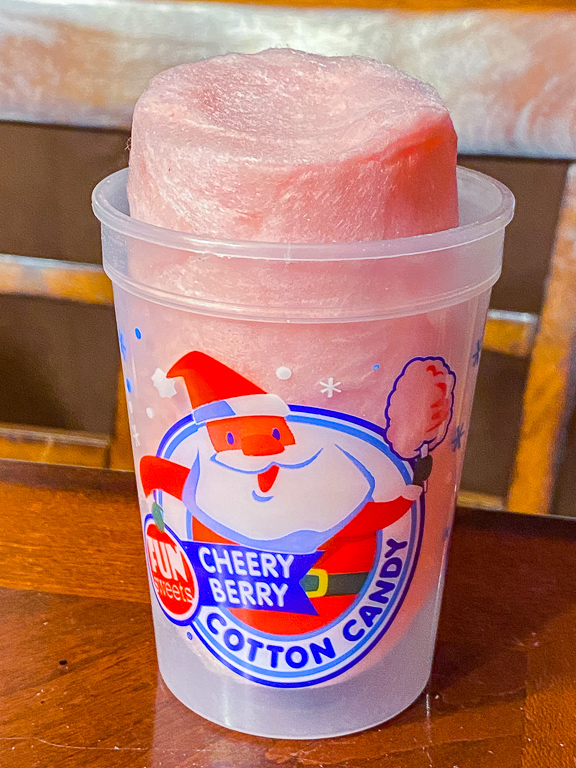 A snowman is showing off our next flavor. Vanilla Snow. Much better than lemon. 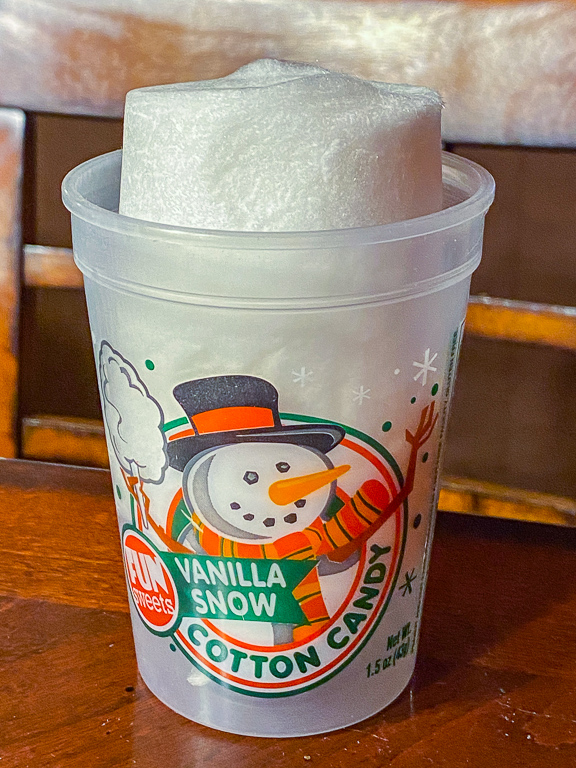 Alli - Smell it first. Ah, that's vanilla. Impressive!
Amy - This one is my least favorite.
Alli - I love that one.
Ian - That one is horrible.
Amy - It doesn't have a lot of extra flavor.
Joe - So far, I like them in descending order. And I bet the Hot Cocoa will be even worse than the Vanilla Snow. 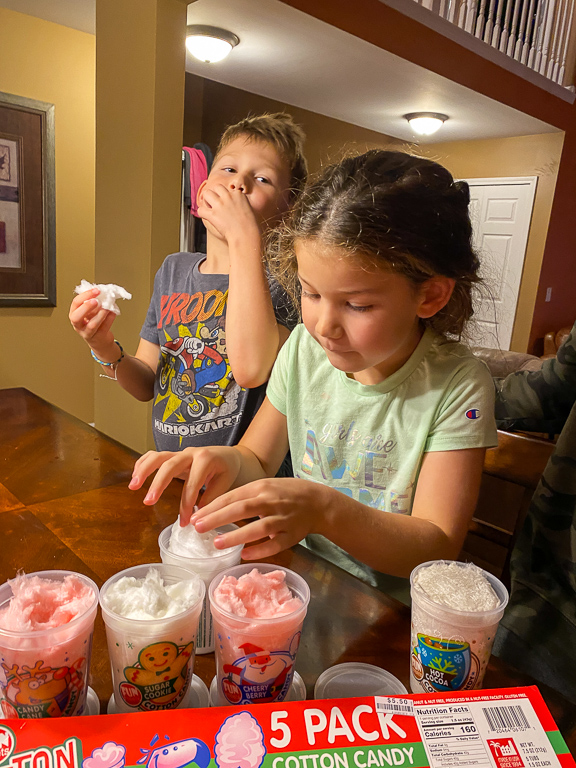 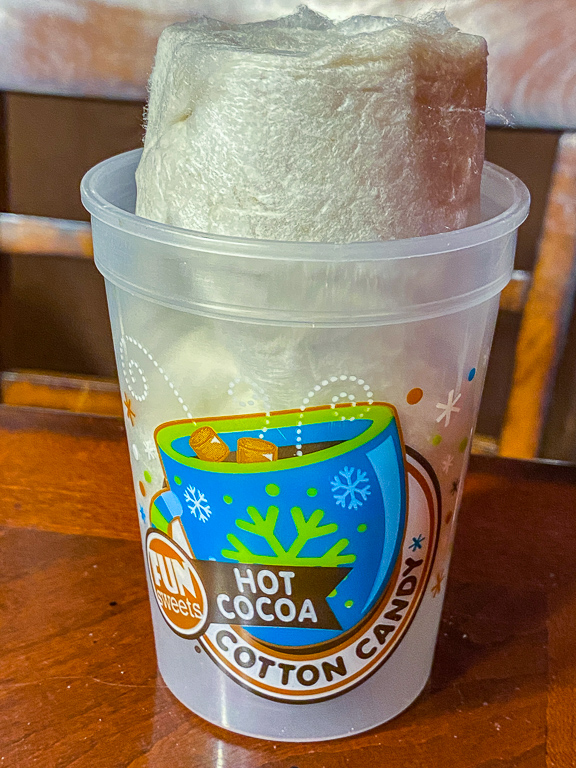 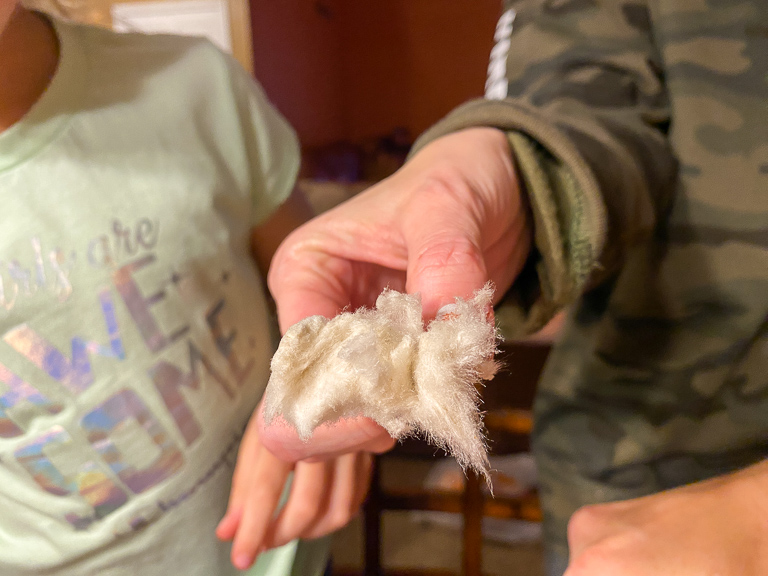 After trying all the flavors, we started getting into combinations. Like a vanilla topped hot chocolate (like a marshmallow). Or Peppermint Mocha by mixing Candy Cane and Hot Cocoa. In the end though, it was the regular flavors that we all liked best. 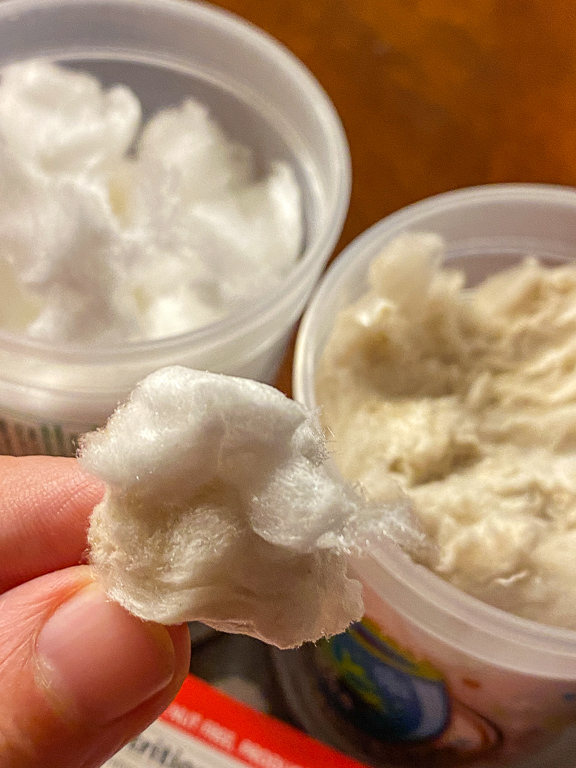 As far as favorites go, Amy and I both thought the Candy Cane was best, though the Sugar Cookie was a surprising close second. Actually our rankings were identical for all 5 flavors, and it was in the order that they were in the packaging. Candy Cane, Sugar Cookie, Cheery Berry, Vanilla Snow, and Hot Chocolate dead last. 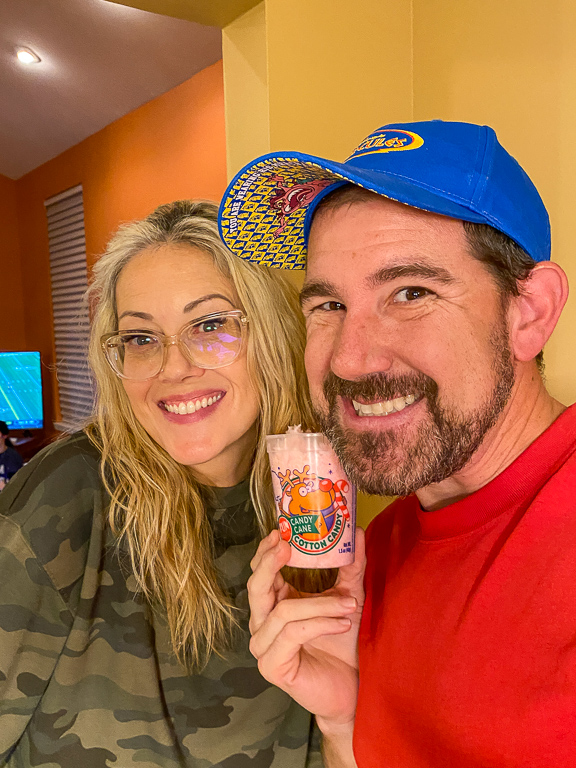 And in a surprise, Ian thought that the Hot Cocoa cotton candy was the best. We definitely have different taste buds. 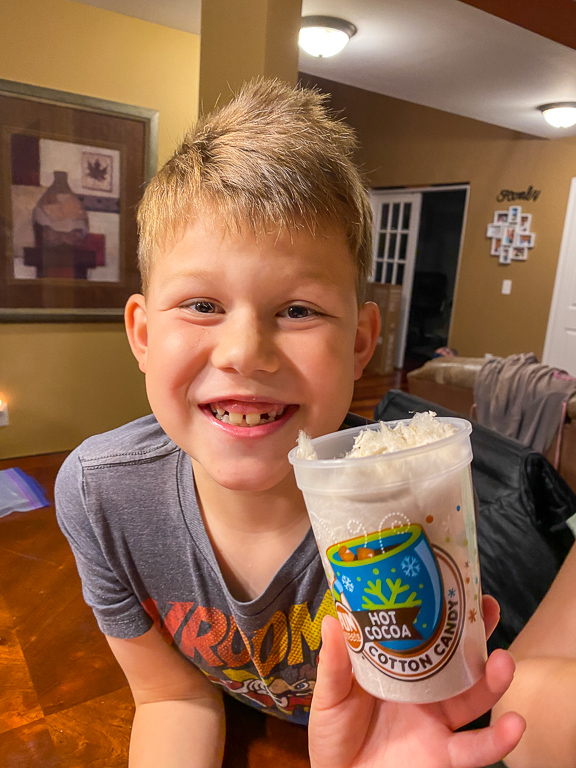 And Alli likes the Vanilla Snow the best.
Ethan came over at the tried them all when we were done. He liked the Sugar Cookie the best!
Well this turned out a lot better than I think any of us were expecting. The flavors of all the cotton candies were very well done! Good job Fun Sweets! 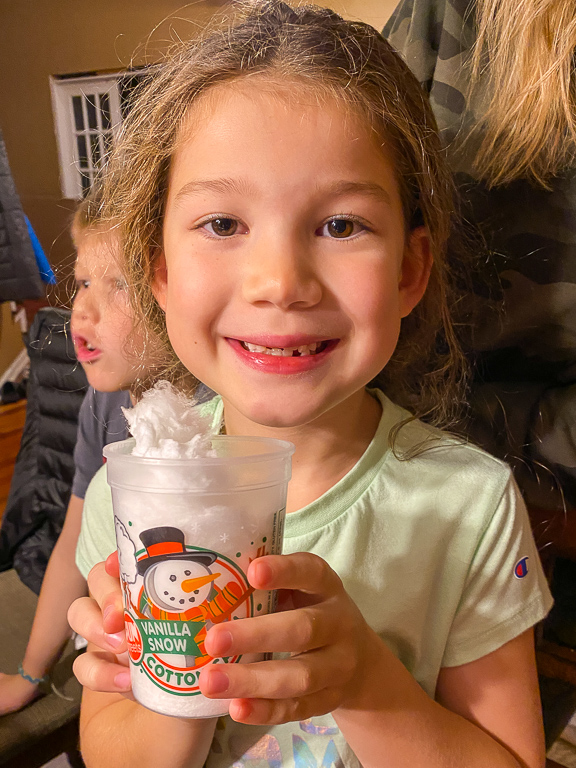